Heterotopic pancreas (HP), also known as ectopic or aberrant pancreas, is a congenital anomaly defined as aberrantly located pancreatic tissue without anatomical or vascular connection to the pancreas (1). HP can appear anywhere in the abdominal cavity, with common sites including the stomach, duodenum, and proximal jejunum. As the majority of cases are asymptomatic and the reported incidence is therefore very low, most cases are found on autopsy or via laparotomy.

This study reports four intussusception cases at the First Affiliated Hospital of Zhejiang University, between January 2013 and August 2015, with an average patient age of 28 years old. Patients presented with abdominal pain as their main symptom, accompanied by gastrointestinal bleeding and various other symptoms. Charts were analyzed for patient demographics, presenting symptoms, blood test results, pre-operative imaging, operative procedure, and pathologic evaluation. All cases underwent emergency laparotomy and were diagnosed with ileo-ileal intussusception and gastrointestinal bleeding caused by HP. We present the following cases in accordance with the CARE reporting checklist (available at http://dx.doi.org/10.21037/atm-20-2294) (4).

Case 1 was a 42-year-old woman referred to our hospital because of abdominal pain and melena lasting 3 months. On assessment, the patient appeared apprehensive and pale. Physical examination revealed tenderness in the right lower quadrant, with no palpable lump. Laboratory investigations revealed a hemoglobin level of 85 g/L. Intussusception was suspected and confirmed on abdominal ultrasound. Computed tomography (CT) imaging revealed an ileal mass, intussusception with thickening of the colic wall, and slight proximal intestinal dilation (Figure 1). An emergency laparotomy was performed immediately which revealed a submucosal lipoma (measuring 5 cm × 4 cm) causing intussusceptions; this was subsequently removed along with part of the small intestine. Pathologic examination suggested an ileo-ileal intussusception secondary to a 5 cm submucosal lipoma with HP. The patient recovered uneventfully and was discharged 8 days after the operation.

Case 2 was a 17-year-old boy who presented with intermittent dull abdominal pain and melena for 1 month, and was admitted to hospital for further evaluation. Physical examination revealed an abdominal mass in the right lower quadrant; however, there were no signs of peritonitis. Blood tests showed a low hemoglobin level of 75 g/L, while gastroscopy, capsule endoscopy, and colonoscopy were unremarkable. Abdominal and pelvic CT showed bowel obstruction and intussusception with a 5 cm × 2 cm mass (Figure 2). Partial ileal resection of the intussusception was performed, followed by a side-to-side anastomosis. Histopathological analysis of the specimen revealed a benign ileum with HP, with no evidence of malignancy. He had no further abdominal pain or melena after surgery.

Case 3 was a 27-year-old man who presented with a 5-year history of intermittent and progressive abdominal pain and melena. Capsule endoscopy 5 years prior had revealed small intestine polyps with multiple venous malformations; however, all symptoms improved with pharmacological management. The patient was later admitted to hospital with recurrent abdominal cramping. Physical examination was unremarkable, and laboratory data were negative; however, fecal occult blood was positive, and CT revealed an ileal intussusception (Figure 3). A 3 cm tubular structure with an abundant fatty component was found at the proximal end of the intussusception. Due to the presence of melena and an associated hemoglobin drop from 108 to 91 g/L in 3 days, the patient underwent emergency laparotomy where ileo-ileal intussusception was found approximately 140 cm from the ileocecal valve. A segmental ileal resection with ileoileostomy was performed. Histological examination was typical of HP tissue, and the patient was discharged 5 days later following an unremarkable postoperative course.

Case 4 was a 26-year-old man who presented to the emergency room with severe abdominal pain and bilious vomiting. Physical examination showed hyperactive bowel sounds and mild generalized abdominal tenderness without guarding or rigidity, but no rebound tenderness. Biological examination did not yield significant results; however, routine blood tests revealed a hemoglobin level of 128 g/L, and fecal occult blood was positive. CT revealed a large pedunculated mass with intussusception of the terminal ileum (Figure 4), and emergency laparotomy was subsequently performed. The invaginated segment was situated approximately 90 cm from the ileocecal valve, and there was an firm ovoid mass measuring 5 cm × 4 cm. The ileum, including the intussusception, was removed and primary side-to-side anastomosis was performed. Histopathology showed complete excision of the mass, which contained heterotopic pancreatic tissue. The patient was discharged home on postoperative day 8. The study was approved by the Ethics Committee of the First Affiliated Hospital, School of Medicine, Zhejiang University, China (No. 2020-93) and conducted in accordance with the Declaration of Helsinki (as revised in 2013). Written informed consent was obtained from the patients for publication of this manuscript and any accompanying images.

In this paper we describe a case series of four patients who underwent emergency laparotomy for ileo-ileal intussusception and gastrointestinal bleeding with a final pathologic evaluation of HP. Although this provides useful insights for future diagnosis and management, unfortunately, these four cases show that diagnosis prior to surgery is difficult and ultimately requires postoperative histopathology. Table 1 summarizes the clinical findings, pre-operative imaging, and operative procedure in these cases, while a timeline of cases is illustrated in Table 2. 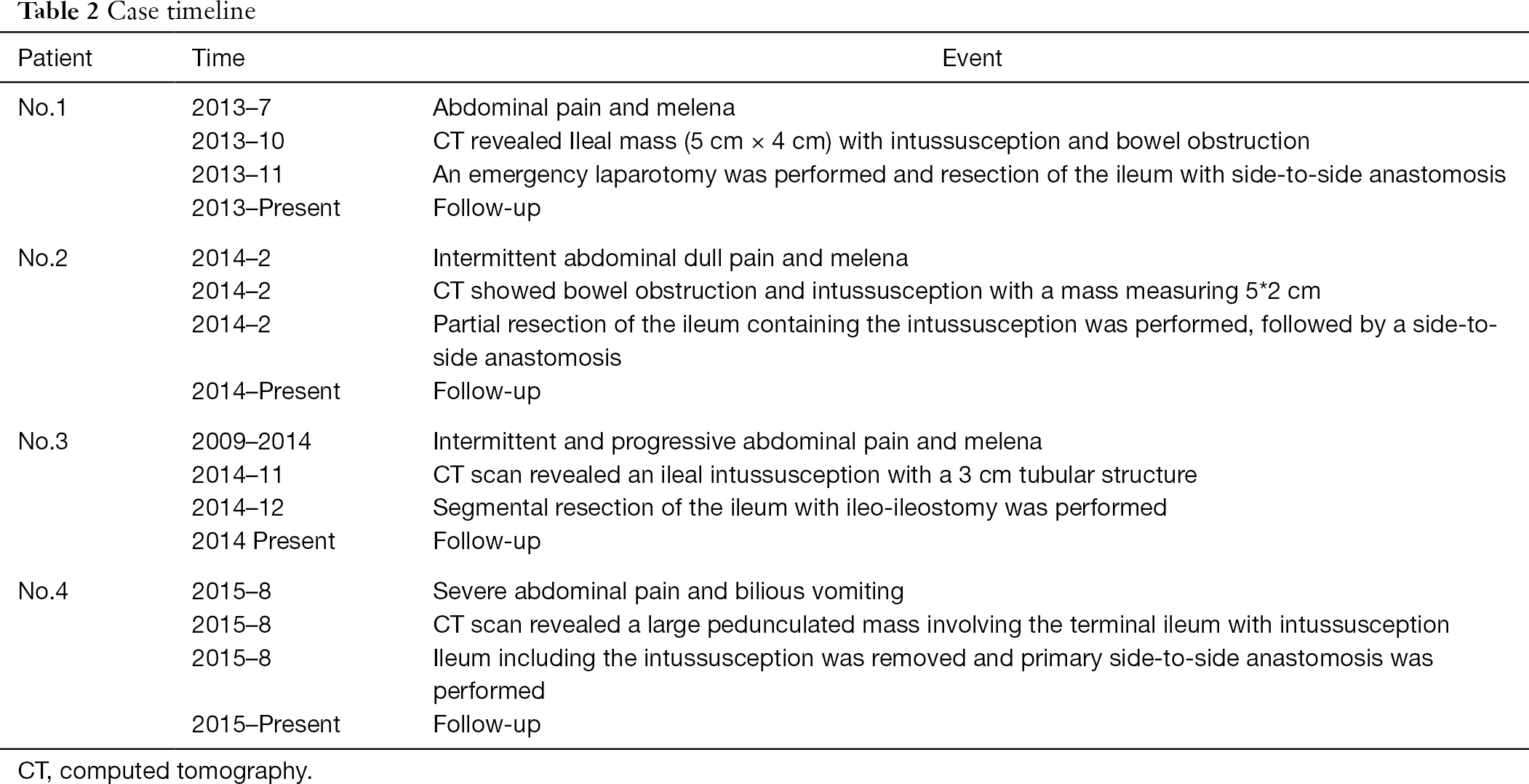 HP is a congenital malformation where isolated pancreatic tissue grows outside the pancreas without anatomical and vascular connection with normal pancreatic tissue. The HP incidence in autopsy ranges from 0.5% to 13.5% in reported series (5,6). In pediatric patients, the condition is more common in females; however, in adults, the condition is more common in males and during the fourth, fifth, and sixth decades of life (7,8). In our reports, three of the four non-pediatric patients were male, with an average age of 28 years.

HP is common in the upper digestive tract, with the most common sites being the stomach (25–38%), duodenum (17–36%), and jejunum (15–21%) (9). It has also been observed in the esophagus, ileum, Meckel’s diverticulum, mesentery, mediastinum, lung, spleen, gallbladder, liver, and bile duct. Histopathologically, HP is most commonly found in the submucosal layer of the intestinal wall (54%) followed by the submucosa and lamina propria (23%); it is seen less in subserous muscle (11%) and intrinsic muscle (8%), and very uncommonly seen in the whole wall (4%) (10). While the HP formation mechanism remains unclear, the most tenable explanation is the misplacement theory, whereby the tissue is separated from the pancreas and continues to develop in its abnormal position during the embryo rotation process of dorsal and ventral pancreatic bud fusion (11,12).

The vast majority of patients are asymptomatic; however, HP can cause symptoms depending on its location, size, and complications. Complications in the intestine include intussusception, intestinal obstruction, and gastrointestinal bleeding; malignant transformation is also a rare complication, with an incidence of 0.7–1.8% (13). Consequently, the most common symptoms of HP are abdominal pain, followed by nausea, vomiting, melena, blood stool, and weight loss. In our study, abdominal pain was reported in all four cases, accompanied by gastrointestinal bleeding. All cases had varying degrees of anemia, but no specific laboratory findings.

Some authors believe that imaging is specific in the diagnosis of HP and can distinguish HP from other space-occupying lesions. The most common CT finding is a small oval-shaped intramural mass with an unclear margin or differential lobe (5). The enhancement characteristics of HP and normal pancreatic tissue in our cases were consistent, which were related to their histologic composition. That is to say, the lesions dominated by acinar showed strong uniform enhancement after intravenous injection, while the lesions dominated by catheter showed low vascular and magnetic resonance imaging (MRI) inhomogeneity. Both MRI and CT have this characteristic (5,14). Ruan et al. (15) reported that HP in the small bowel with focal fluorodeoxyglucose 18F (18F-FDG) uptake could possibly differentially diagnosis intestinal tumor and tuberculosis.

Endoscopic ultrasonography and endoscopic biopsies are helpful in the diagnosis of HP. Under endoscopic ultrasonography, the most common manifestation of HP is submucous solid mass, which is hypoechoic relative to the hyperechoic submucosa, and isoechoic relative to intrinsic muscle (16); however, endoscopy is of little help in the diagnosis of small intestinal HP in emergency cases where bleeding or obstruction has occurred. In our report, cases 2 and 3 received endoscopic examination—including capsule endoscopy—due to serious gastrointestinal bleeding, but this yielded no positive results; meanwhile, CT showed intussusception with intestinal obstruction or space-occupying lesions. Despite these findings, HP diagnosis was ultimately determined using postoperative pathological results due to the lack of specificity of clinical symptoms, laboratory examination, and endoscopic examination; however, auxiliary examination methods could be considered in making a preoperative diagnosis in adult intussusception cases and gastrointestinal bleeding.

Surgical excision remains the only curative therapy for HP-related intussusception and gastrointestinal bleeding and provides an opportunity for histological diagnosis of potential malignancy. Surgical resection includes laparotomy and laparoscopic surgery; laparotomy provides more comprehensive exploration but greater trauma and surgical scarring, while laparoscopy is less traumatic with minimal surgical scars but may miss diagnosis, cause perforation, and present other risks. The treatment of asymptomatic, histologically verified HP, or incidental HP findings during surgery for other abdominal diseases, remains controversial. Some clinicians recommend complete excision in asymptomatic patients for histological confirmation and prevention of future complications, such as malignant transformation, intestinal obstruction, gastrointestinal bleeding, and other serious complications. All our patients underwent emergency laparotomy, recovered well after operation, and had no obvious complications.

Intussusception caused by HP is relatively rare, with few cases being previously reported. While isolated HP causing ileo-ileal intussusception and gastrointestinal bleeding is rare, the possibility of HP should be considered as part of differential diagnosis in these cases. CT could provide useful preoperative information; however, many cases are undetected or misdiagnosed on imaging and ultimately require emergency laparotomy for diagnosis. This report is clinically important as it is one of few published studies on intussusception and gastrointestinal bleeding due to HP.

Reporting Checklist: The authors have completed the CARE reporting checklist. Available at http://dx.doi.org/10.21037/atm-20-2294

Conflicts of Interest: All authors have completed the ICMJE uniform disclosure form (available at http://dx.doi.org/10.21037/atm-20-2294). The authors have no conflicts of interest to declare.

Ethical Statement: The authors are accountable for all aspects of the work in ensuring that questions related to the accuracy or integrity of any part of the work are appropriately investigated and resolved. The study was approved by the Ethics Committee of the First Affiliated Hospital, School of Medicine, Zhejiang University, China (No. 2020-93) and conducted in accordance with the Declaration of Helsinki (as revised in 2013). Written informed consent was obtained from the patients for publication of this manuscript and any accompanying images.