Small cell lung cancer (SCLC) accounts for 10–15% of all lung cancers. About 70% of the patients are already in the extensive stage at the initial diagnosis, with a median overall survival (OS) of only 8–10 months (1,2). So far, platinum-based chemotherapy is still the standard treatment for extensive stage small cell lung cancer (ES-SCLC), with a response rate of up to 60–80%. However, most patients (approximately 90%) develop intrathoracic progression within 1 year after completion of chemotherapy. There are few effective treatment options, and the 2-year survival rate is only 5% (3,4).

Since SCLC is sensitive to radiotherapy, many studies have explored the effect of consolidation thoracic radiotherapy (TRT) in ES-SCLC. A randomized controlled trial (RCT) published in 1999 was the first to suggest that the addition of TRT improved OS and first relapse-free survival in ES-SCLC. Patients with complete response (CR) at a distant site and at least partial response (PR) at a local site were selected in the study as they had a better prognosis (5). A subsequent RCT demonstrated TRT improved long-term survival in ES-SCLC, with the 2-year OS rate of 13%. In addition, TRT reduced the incidence of intrathoracic progression (P<0.0001) (6). Recent retrospective analyses and database-based studies have also demonstrated the survival benefits of thoracic consolidation radiotherapy (7-9). However, the latest randomized trial RTOG-0937 found that despite improved progression-free survival (PFS), the median survival in the TRT group (13.8 months) was worse than that in the prophylactic cranial irradiation (PCI) group (15.8 months) (10). In another retrospective study, no PFS or OS benefit of TRT was observed in patients with brain/liver/multi-metastasis (11). Therefore, the role of thoracic consolidation radiotherapy in patients with ES-SCLC remains controversial.

In this meta-analysis, we compared the effects of thoracic consolidation radiotherapy versus chemotherapy alone on survival of patients with ES-SCLC by systematically reviewing RCTs and retrospective studies.

We present the following article in accordance with the PRISMA reporting checklist (available at http://dx.doi.org/10.21037/atm-20-5765).

The review was registered in PROSPERO with the registration number CRD42020190575. PubMed, Embase, and the Cochrane library were systematically searched without any language restriction. All electronic database resources are available from the Nanjing Medical University Library. Our team has mastered the search strategy of electronic databases under the guidance of a medical librarian. Search terms were: (“extensive” or “advanced” or “metastatic” or “stage IV”) and (“radiation” or “radiotherapy”) and (“small cell lung cancer” or “small cell lung carcinoma” or “SCLC”). The last search deadline was July 13, 2020. When necessary, the references quoted in the article were manually retrieved.

The studies which compared the clinical efficacy of TRT combined with chemotherapy and chemotherapy alone for ES-SCLC were eligible for inclusion. Studies that met the following criteria were excluded: (I) insufficient survival data; (II) not ES-SCLC; (III) review, comments, survey, conference abstract, meta-analysis; (IV) not platinum-based chemotherapy as a control group; (V) not TRT.

Two authors (AML and YYX) independently screened eligible studies and extracted the data. Disagreements were resolved by consulting the third author (HZ). The following information was extracted: author, year of publication, country, study period, number of participants, study type, treatment regimen (including chemotherapy, TRT and PCI), and survival data. We evaluated OS, PFS, local recurrence-free survival (LRFS) and toxicity in the meta-analysis. If both univariate and multivariate analyses of survival data were provided in the study, multivariate analysis results were applied because they reduced confounding bias. Similarly, if survival data both before and after propensity score matching (PSM) were presented in the article, the results after PSM were used.

The quality of retrospective studies was evaluated using the Newcastle-Ottawa Scale (NOS). The possible NOS score of each article ranged from 0 to 9, and studies with a score greater than 6 were considered to be of high quality (12). The quality of RCTs was assessed using the Cochrane risk of bias tool (13). Two authors (AML and HZ) independently evaluated the included studies. Any inconsistency was resolved by consensus.

Review Manager version 5.3 (Copenhagen: The Nordic Cochrane Centre, The Cochrane Collaboration) was used for statistical analysis. A P<0.05 was considered statistically significant. The effects of thoracic consolidation radiation on OS, PFS and LRFS in patients with ES-SCLC were evaluated by hazard ratios (HRs) and the corresponding 95% confidence interval (CIs). If the HRs and 95% CIs were not directly reported in the included article, we used Engauge Digitizer version 11.1 (http://sourceforge.net/projects/digitizer/) to estimate them from the Kaplan-Meier curve (14,15). Risk ratio (RR) was used to analyze toxicity. Heterogeneity was tested by Cochrane’s Q test and I-square (I2). The random-effects model was used when significant heterogeneity was observed (P<0.1 or I2>50%); otherwise, the fixed-effects model was applied. Potential publication bias was assessed by funnel plots. Sensitivity analysis was performed when necessary to explore possible sources of heterogeneity.

We initially retrieved 6,256 studies from the electronic databases, of which 1,265 were duplicates. A total of 4,754 studies were excluded by screening titles and abstracts. After reading the full text of the remaining 237 studies, 12 studies were eventually included in the meta-analysis: 3 RCTs and 9 retrospective studies (5-6,8-11,16-21). The selection process of the study is shown in Figure 1. 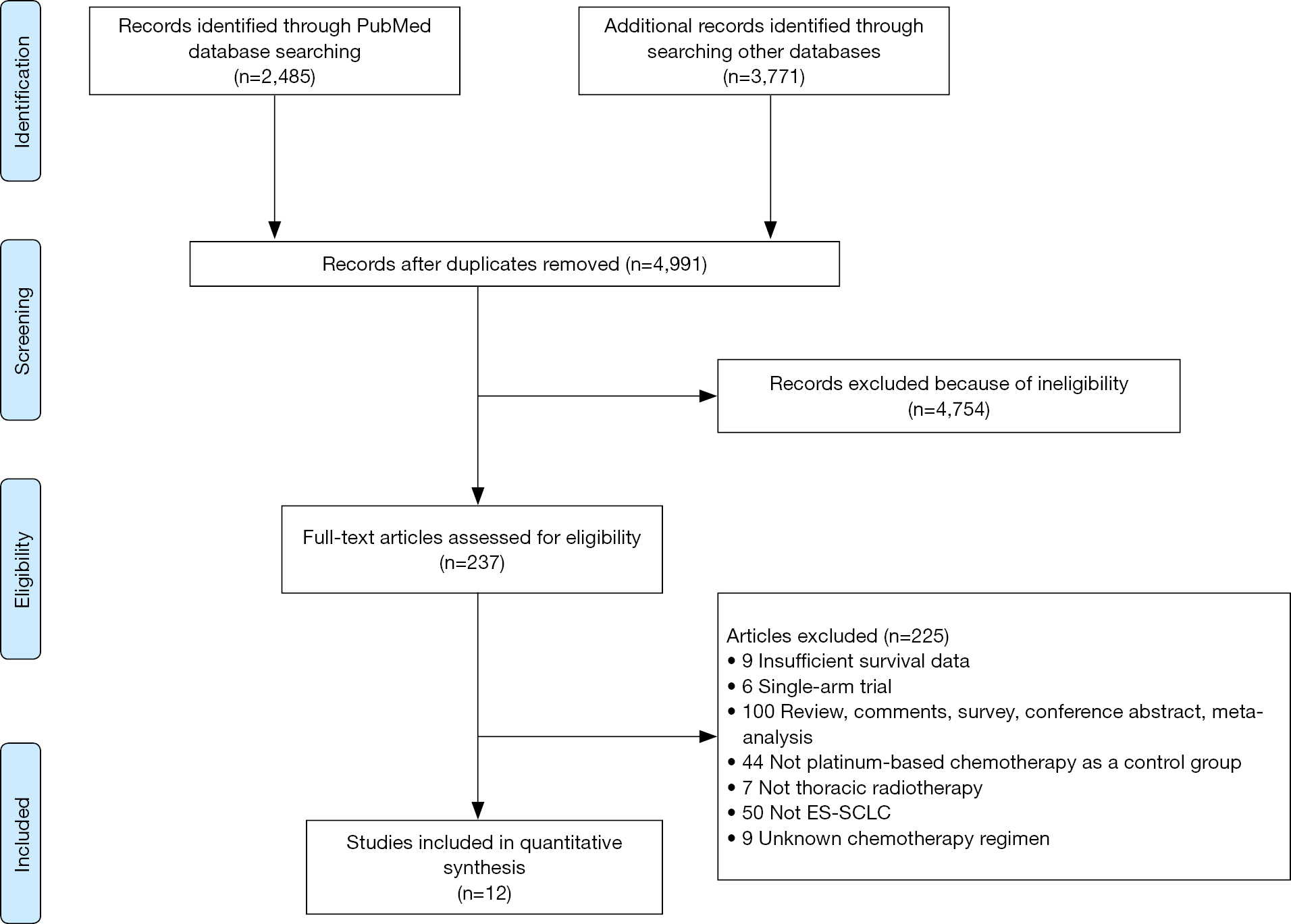 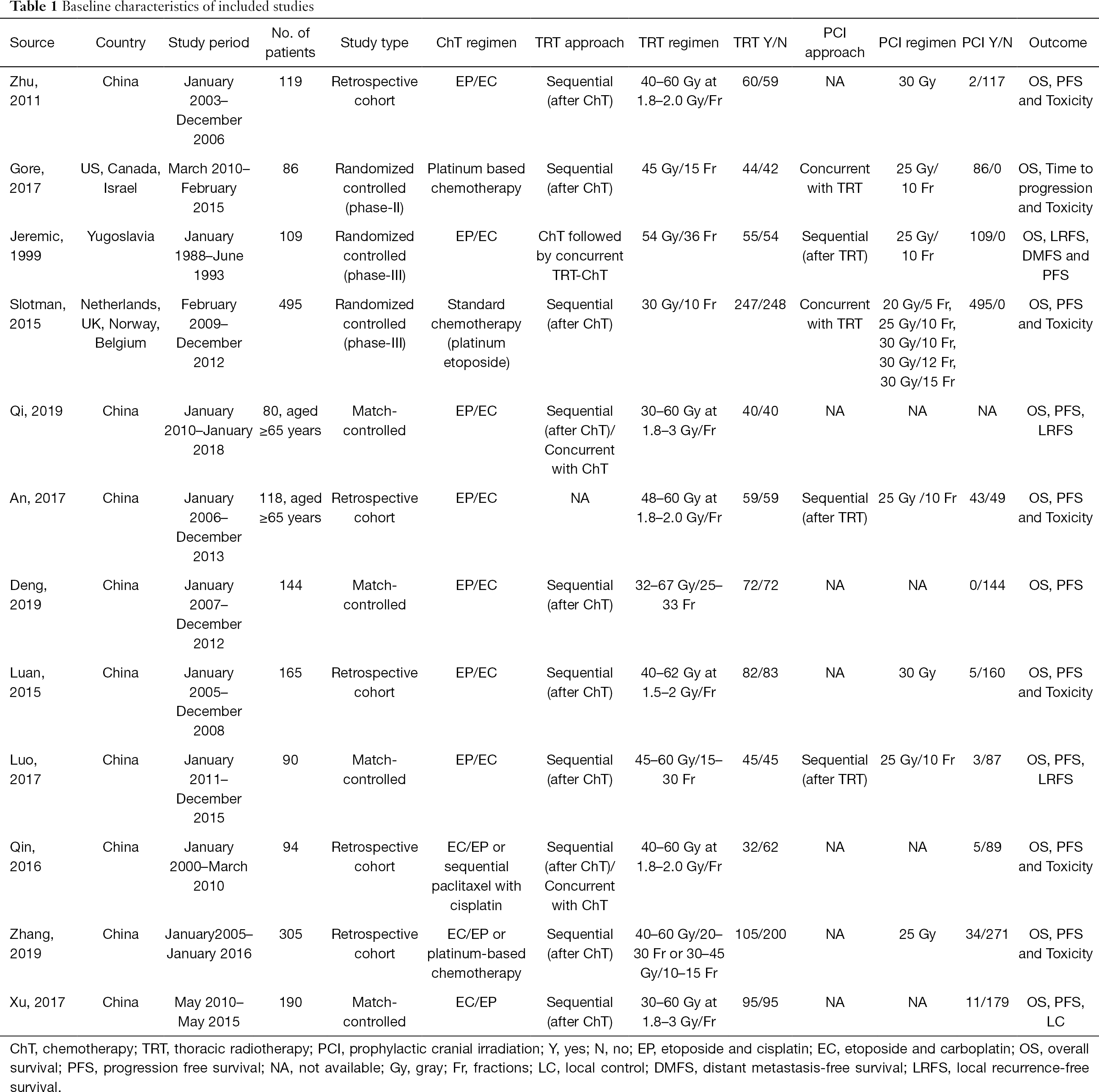 All the retrospective studies scored ≥7, and were considered to have high quality. As shown in Table 2, all three RCTs claimed randomization, but no methods for random assignment sequence generation and allocation concealment were reported. The age distribution of patients in the experimental group and the control group in trial RTOG-0937 was unbalanced (10). 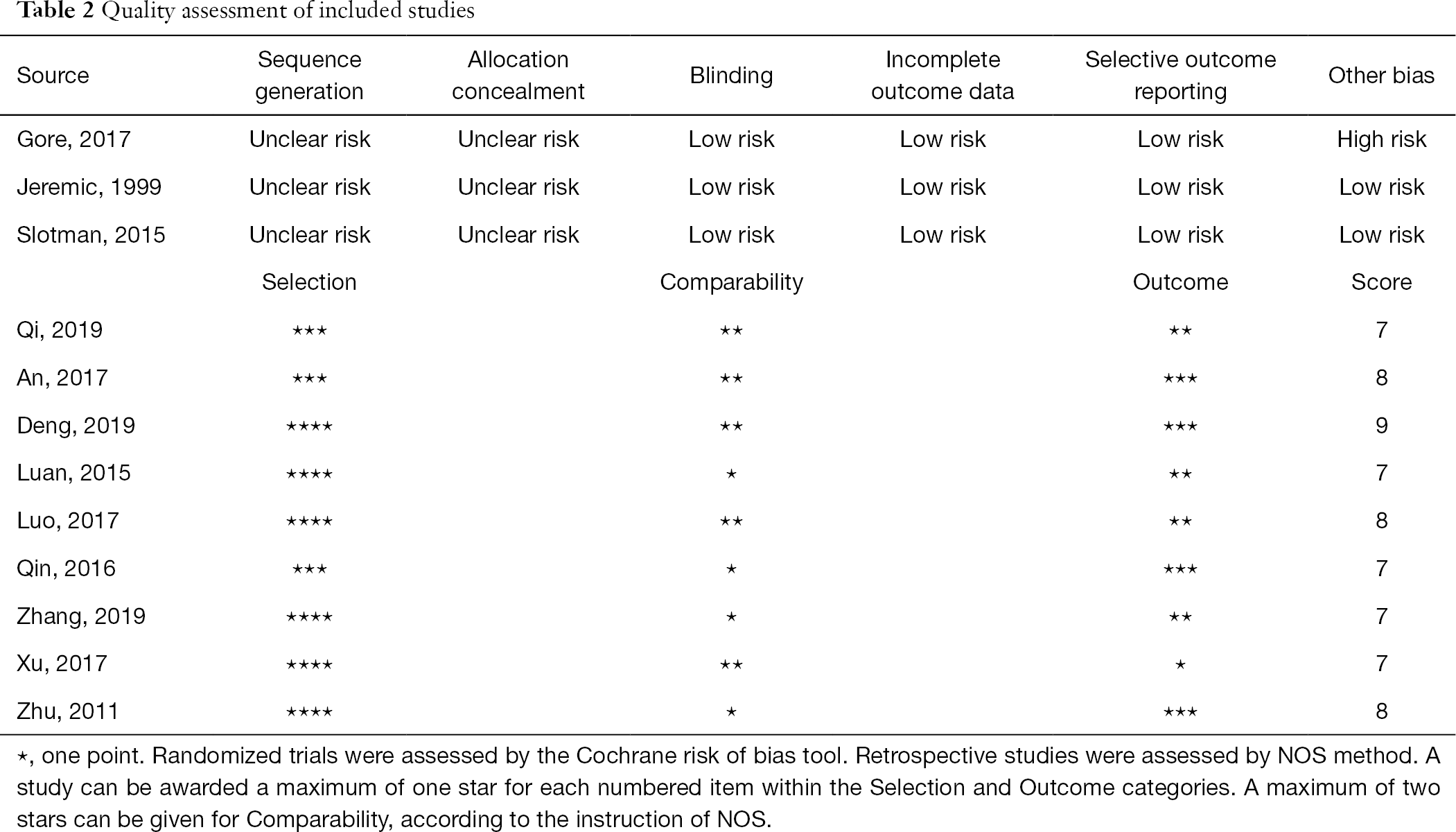 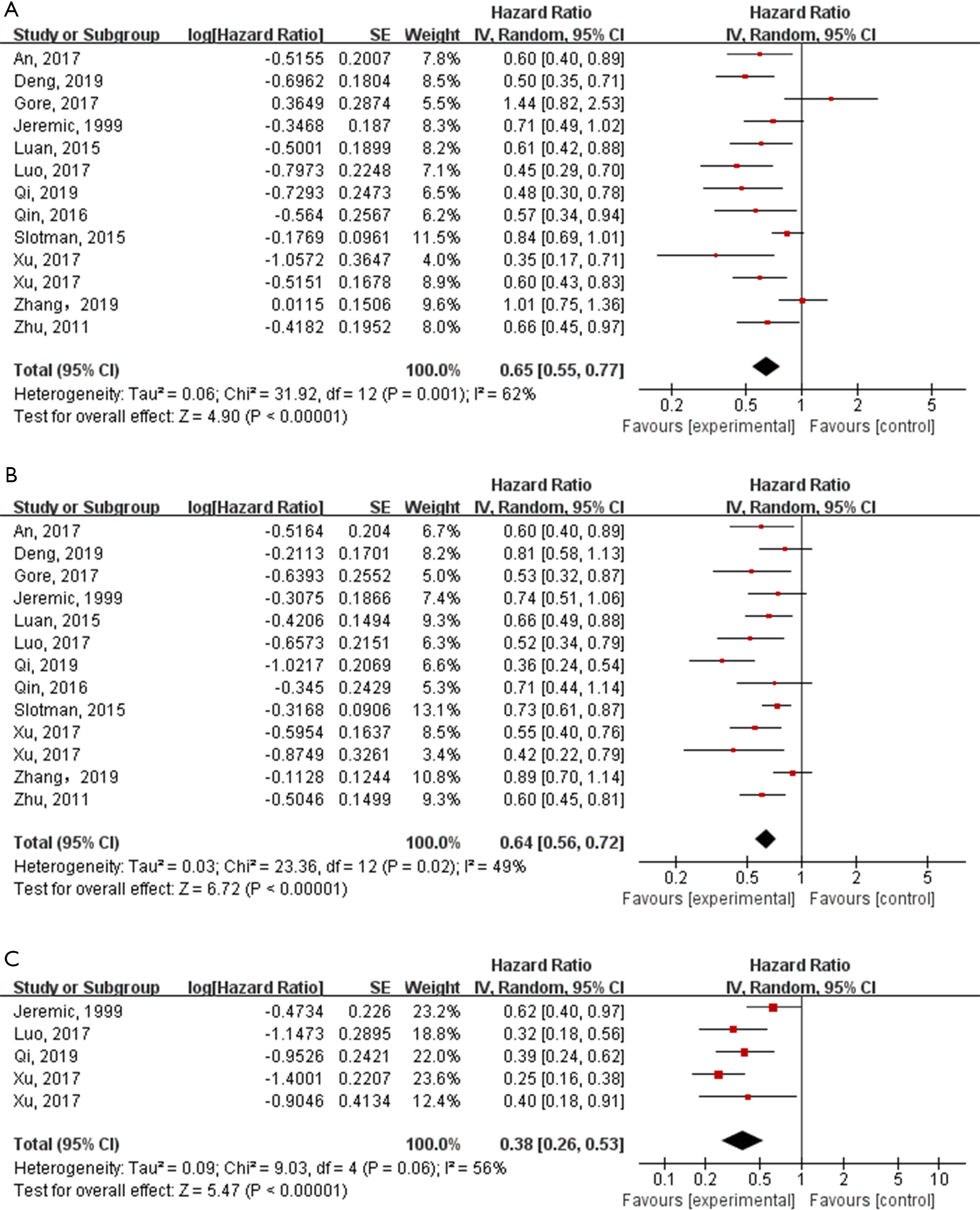 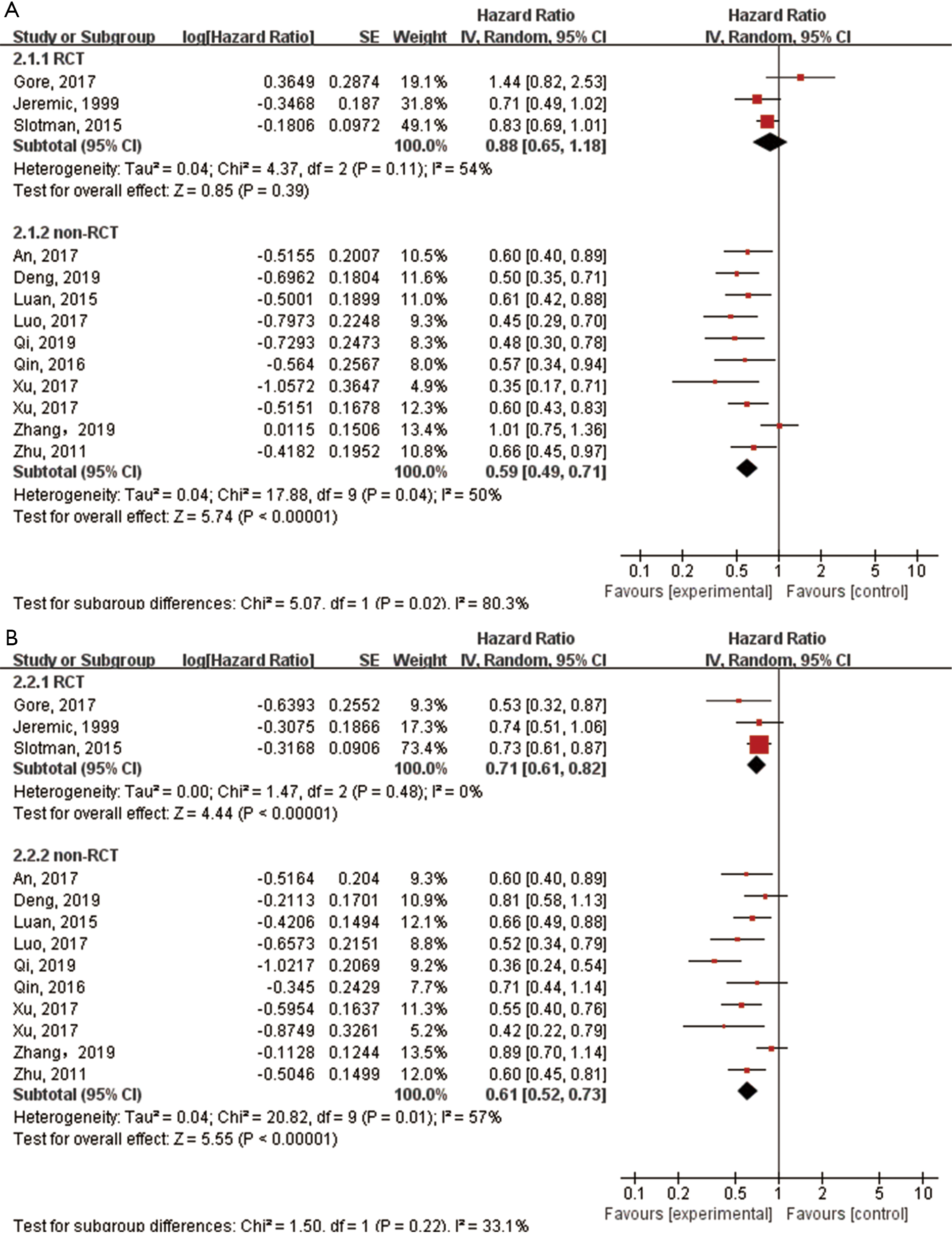 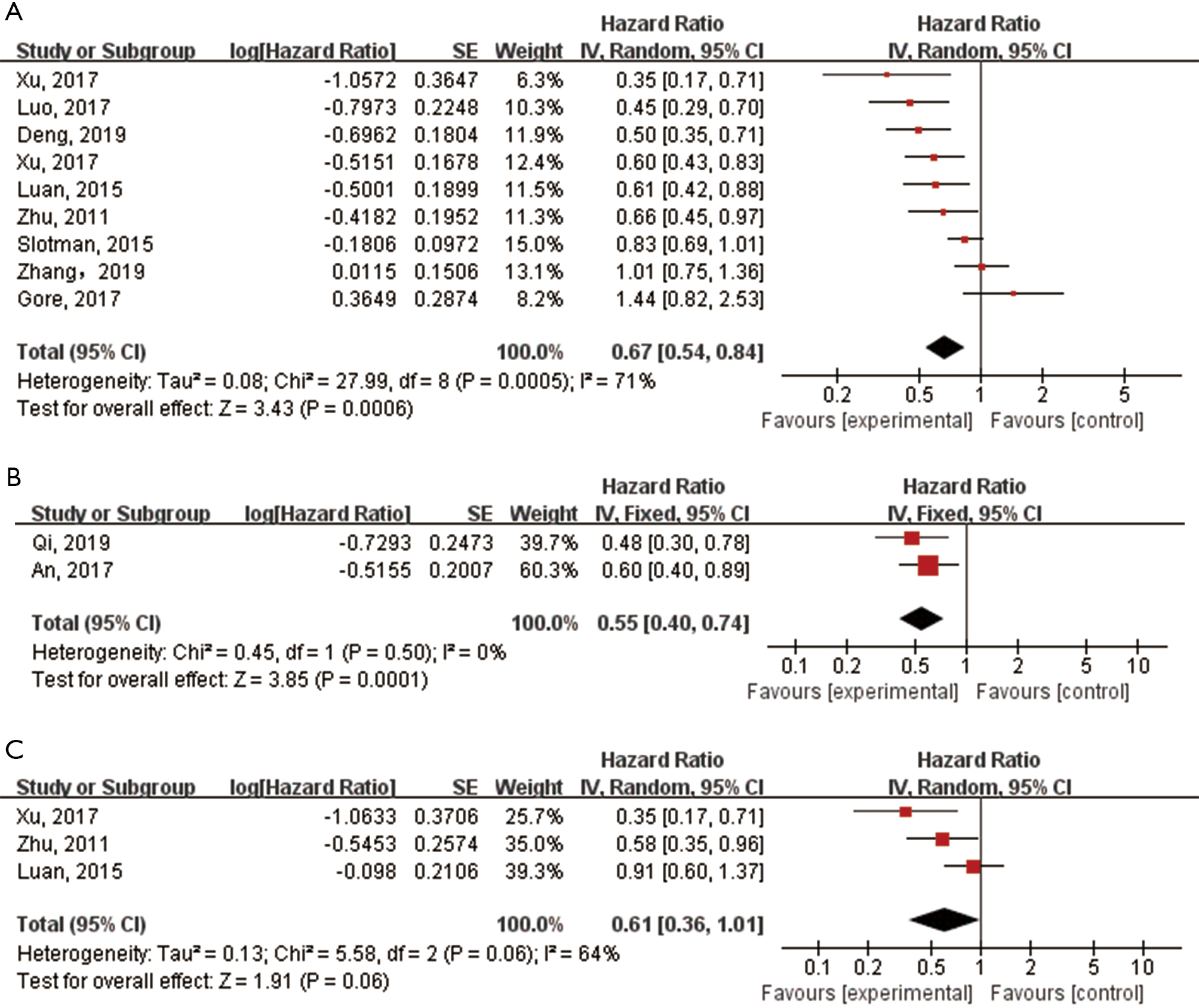 The funnel plot was applied to test publication bias. No substantial publication bias was observed with respect to OS (Figure 6). We also performed sensitivity analysis by deleting one study at a time. The results showed that the effect of TRT on OS, PFS and LRFS was reliable. 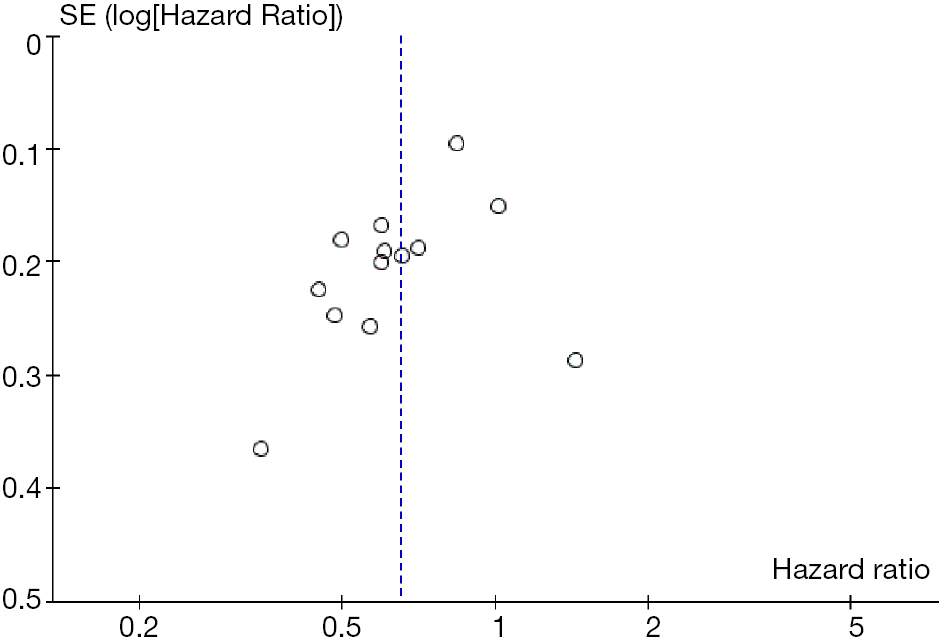 This meta-analysis compared the clinical efficacy of TRT combined with chemotherapy with chemotherapy alone in ES-SCLC based on 12 studies. The combined results showed that TRT significantly improved both OS and PFS. In addition, TRT reduced the risk of intrathoracic progression and improved LRFS.

Subgroup analysis according to the study type was conducted due to significant heterogeneity of the combined results. The benefits of TRT on OS and PFS were observed in the subgroup of retrospective studies. In the subgroup of RCTs, TRT still improved PFS in patients with ES-SCLC. However, the pooled analysis of RCTs showed that there was no significant difference in OS between the two groups, which was consistent with the previous meta-analysis (including the same three RCTs) (22). Moderate degree of heterogeneity was observed in the RCT subgroup, which was mainly affected by the negative results of the RTOG-0937 (10). Baseline characteristics of the TRT group and the non-TRT group in RTOG-0937 were unbalanced, and there were more elderly patients (65 years or older) in the TRT group, which may increase the risk of bias. In addition, the TRT group included more patients with poor performance status, 2–4 metastatic lesions, and PR to initial chemotherapy, which may further weaken the survival advantage of consolidation radiotherapy.

Our meta-analysis suggested that patients receiving consolidation TRT had a higher risk of grade ≥3 toxicity. We then compared the common grade ≥3 toxicity between the TRT group and the control group, and found no statistical difference in hematologic toxicity (leukopenia, thrombocytopenia, anemia) and non-hematologic toxicity (nausea or vomiting) between the two groups. Consolidation TRT resulted in a higher incidence of grade III or higher esophageal and bronchopulmonary toxicity than the non-TRT group. However, the incidence of grade ≥3 esophageal (4.6%) and bronchopulmonary (2.9%) toxicity in TRT group was low. Furthermore, radiation-induced deaths were infrequent, with only two treatment-related deaths in all included studies. They all died of radiation pneumonitis (10,21). In conclusion, chemotherapy combined with TRT was well tolerated in patients with ES-SCLC.

There are some limitations in our study. First, the survival data in some studies were estimated from Kaplan-Meier curves, which may reduce the accuracy of the results. Second, our study included three RCTs and nine retrospective studies. Retrospective studies may introduce selection bias. Third, moderate degree of heterogeneity was found in some combined analyses (all I2<75%). This may be due to the differences in baseline characteristics (performance score, brain metastasis, disease burden), chemotherapy-related issues (response to initial chemotherapy, chemotherapy cycle), radiotherapy regimen (radiation dose, radiotherapy timing), and PCI or not in the included study. Subgroup analyses were not conducted due to insufficient information on these factors in the included studies. However, we performed the sensitivity analysis and found that the benefits of TRT on OS, PFS and LRFS were not affected after excluding any single study, which confirmed the stability of our results.

Our meta-analysis showed that TRT improves OS, PFS and LRFS in patients with ES-SCLC. Further RCTs are expected to confirm our conclusions.

Reporting Checklist: The authors have completed the PRISMA reporting checklist. Available at http://dx.doi.org/10.21037/atm-20-5765

Conflicts of Interest: All authors have completed the ICMJE uniform disclosure form (available at http://dx.doi.org/10.21037/atm-20-5765). The authors have no conflicts of interest to declare.