Lung cancer is the leading cause of cancer death worldwide, with adenocarcinoma being the primary type. Targeted therapy has become the frontline treatment in patients with a targetable driver mutation, and molecular testing is an essential part of diagnostic work-ups. Furthermore, phosphatidylinositol-4,5-bisphosphate 3-kinase catalytic subunit alpha (PIK3CA) mutation has a prevalence of approximately 2% in lung adenocarcinoma as a passenger mutation that is frequently concurrent with other drivers (1-3). However, cases presenting a PIK3CA mutation alone have rarely been reported. The clinical significance of a single PIK3CA mutation has also not been well discussed. We present 2 similar lung adenocarcinoma cases with a single PIK3CA alteration initially but were found to have a concurrent epidermal growth factor receptor (EGFR) mutation by another genotyping afterward. Moreover, 2,214 cases of lung adenocarcinoma at our center were reviewed retrospectively. We present the following article following the CARE reporting checklist (available at http://dx.doi.org/10.21037/atm-20-5948).

All procedures performed in the present study involving human participants were following the institutional and national research committees’ ethical standards and the Declaration of Helsinki (as revised in 2013). Written informed consent was obtained from the patients.

An 87-year-old male with a history of recurrent lung adenocarcinoma presented with cough and dyspnea 3 years after primary surgery. He denied fever, hemoptysis, chest pain, or weight loss. He had a 15-pack/year history of smoking, and physical examination was non-specific. Contrast-enhanced computed tomography (CT) scan showed multiple pulmonary nodules bilaterally, indicating cancer recurrence. He underwent next-generation sequencing (NGS)-based cellular-free DNA (cfDNA) genotyping (Illumina NextSeq 550Dx; 3D Medicines, Shanghai, China), rather than tissue biopsy, considering his physical status and age. Genotyping found a positive PIK3CA mutation but was negative for other gene alterations, including EGFR mutation. Given the result, the patient was placed on everolimus and pemetrexed for 1 year for possible antitumor effects by targeting the phosphatidyl 3-kinase (PI3K) pathway. However, dyspnea worsened until the patient required oxygen inhalation, with serial CT scans showing continuous cancer progression. The patient was referred to our clinic for a second opinion. We repeated the cfDNA genotyping (Bio-Rad QX200 Droplet Digital PCR System, 3D Medicines, Shanghai, China). Genotyping showed EGFR L858R mutation, which led to the initiation of icotinib and anlotinib combination therapy immediately, and relief of symptoms after 1 month. An additional CT scan was done after 7 months and showed an excellent response (Figure 1). The patient was followed periodically, with tumor markers and CT scans indicating progression-free survival for 11 months. 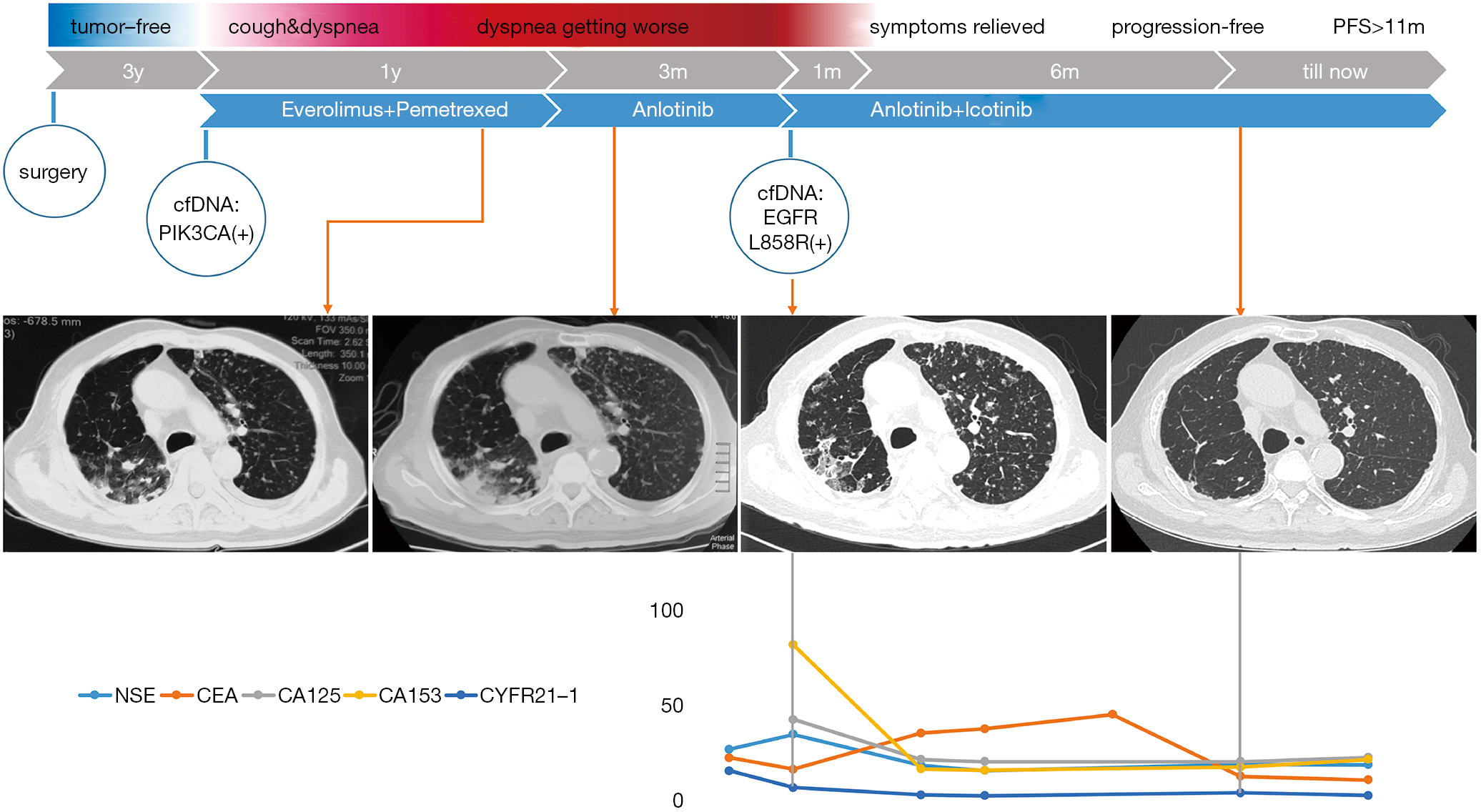 Additionally, the tissue biopsy report stated that the sample contained only 20–30 cancer cells, and therefore was not sufficient for sequencing. Considering the previous experience from case 1 and the sample quality, we reordered NGS-based circulating tumor DNA genotyping (the First Affiliated Hospital of Guangzhou Medical University, Guangzhou, China). While awaiting the result, avastin, pemetrexed, and oxaliplatin were prescribed for 1 course. As with case 1, genotyping reported positive EGFR L858R, which led to the initiation of osimertinib and avastin combination therapy and relief of symptoms. She was discharged with the combination therapy and was followed up with tumor markers and imaging check-ups periodically (Figure 2). The patient remained progression-free for 9 months. 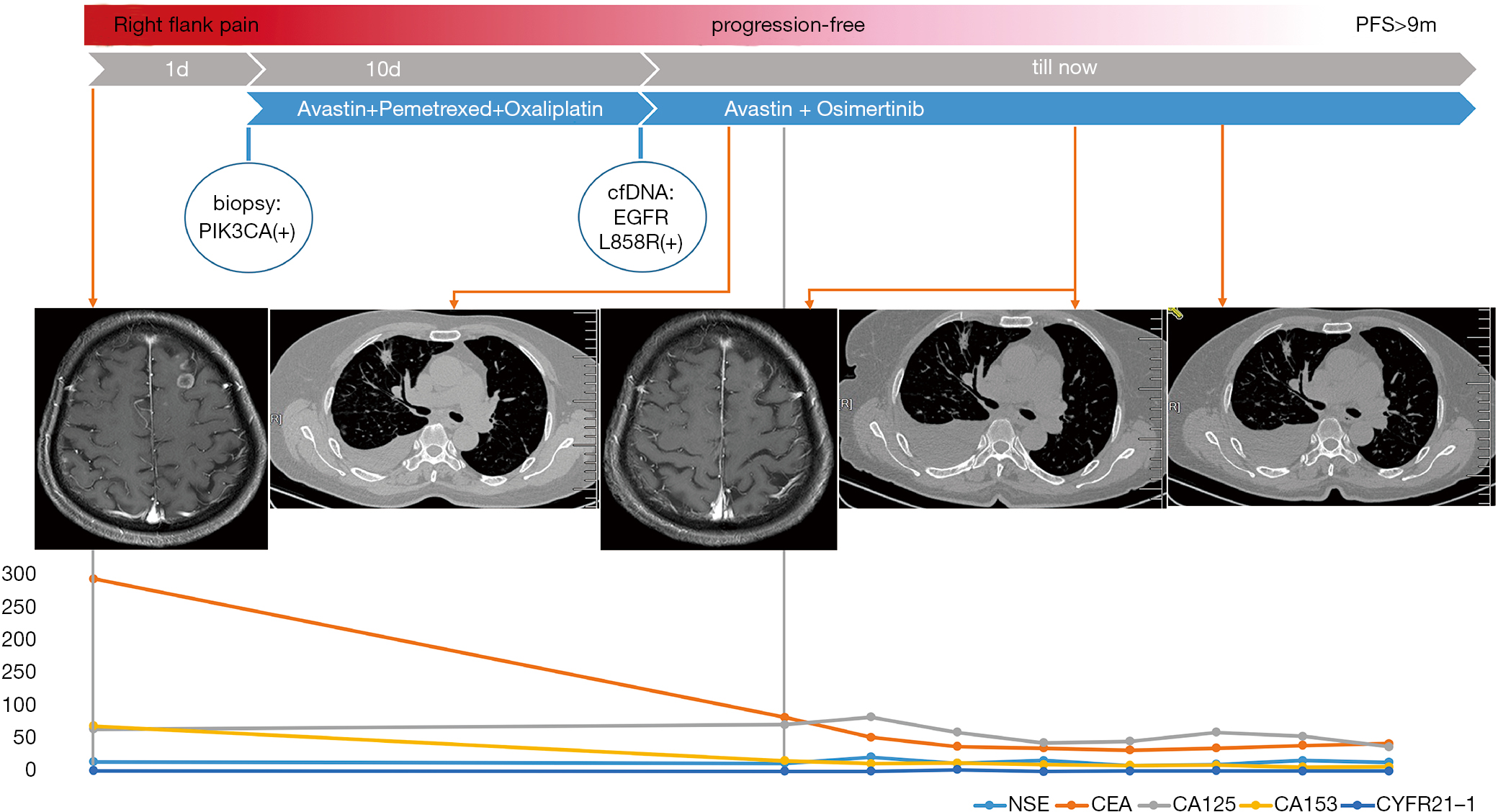 To further explore co-existing mutations of PIK3CA, we retrospectively reviewed 2,214 cases of lung adenocarcinoma at the First Affiliated Hospital of Guangzhou Medical University. The patients were all Asians, with an average age of 58.8 years and a male ratio of 47.2%. The results showed that the prevalence of PIK3CA mutation in lung adenocarcinoma was 1.7%, with a co-existing mutation rate of 86.5%. The most common type of co-existing mutations was EGFR mutation (71.9%), followed by tumor protein p53 (56.3%), Kirsten rat sarcoma viral oncogene (KRAS; 18.8%), anaplastic lymphoma kinase (ALK; 6.3%), v-raf murine sarcoma viral oncogene homolog B1 (BRAF; 6.3%), mesenchymal-epithelial transition factor (6.3%), and breast cancer 1 (3.1%) (Figure 3).

PIK3CA encodes the catalytic subunit of PI3K, which is an intracellular central mediator of cell survival signals. The activation of PI3K by growth factor-bound receptor tyrosine kinases, such as EGFR tyrosine kinase, drives PI3K/Akt/mTOR pathway activation, resulting in cell survival, transformation, metastasis, and migration (3). PIK3CA mutation has a prevalence of approximately 2% in lung adenocarcinoma as a passenger mutation, concurrent with other drivers, such as KRAS, EGFR, BRAF, and ALK (1-3). In a study of 1,125 patients with lung adenocarcinoma, 70% of cases with PIK3CA mutation had a co-existing mutation in other oncogenes (3), indicating a high likelihood of PIK3CA being concurrent with another driver mutation. Additionally, the 2 cases reported here also support the finding that PIK3CA is very likely to co-exist with another driver mutation (3). To further verify this, we reviewed 2,214 cases of lung adenocarcinoma from our medical center retrospectively. PIK3CA mutation was found in 1.7% of lung adenocarcinoma cases, 86.5% of whom had other concurrent mutations, with EGFR being the most common type.

The poor response of case 1 to mTOR inhibitor led us to question the efficacy of agents targeting the PI3K/Akt/mTOR pathway, which has been implied by disappointing results of many preclinical investigations and clinical trials (5) and also underlines the fact that PIK3CA mutation is not a driver mutation. Therefore, the mTOR inhibitor would not prevent cancer progression, even with the presence of PIK3CA mutation.

In both cases, the slowdown of cancer progressions after EGFR tyrosine kinase inhibitor (EGFR-TKI) therapy raises the suspicion of false negatives of EGFR L858R initially rather than false positives of EGFR afterward. The potential causes include tumor heterogeneity, the sensitivity of the technique used for genotyping, and an unqualified sample. First, tumors are temporally and spatially heterogeneous; therefore, the heterogeneous expression of the molecular targets in a particular biopsy sample may not project molecular profiling of the whole tumor (6), which is a potential explanation for the initial negative EGFR mutation in case 2. Second, even within the same sample, the NGS technique used in both cases had a sensitivity of 97.8%, with false negatives located mainly in complex genomic regions, such as A/T-rich regions, G/C-rich regions, and homopolymer stretches (7). Moreover, the genotyping report of case 2 stated that the sample contained only 20–30 cancer cells and was not sufficient for sequencing.

With the current widespread use of targeted therapy in clinical practice, physicians depend significantly on genotyping results to guide treatment regimens. However, it is essential to analyze the result dialectically according to the individual scenario. These 2 cases indicate the clinical significance of a single PIK3CA mutation detected in lung adenocarcinoma. Because PIK3CA mutation is likely to be concurrent with another driver mutation, demonstrated in both previous studies and our single-center retrospective review, physicians should repeat the genotyping promptly to reveal a concealed driver mutation and prevent cancer progression. Moreover, a combination therapy of TKI and angiogenesis inhibitor may be considered for EGFR-mutated lung cancer.

Reporting Checklist: The authors have completed the CARE reporting checklist. Available at http://dx.doi.org/10.21037/atm-20-5948

Conflicts of Interest: All authors have completed the ICMJE uniform disclosure form (available at http://dx.doi.org/10.21037/atm-20-5948). The authors have no conflicts of interest to declare.

Ethical Statement: The authors are accountable for all aspects of the work in ensuring that questions related to the accuracy or integrity of any part of the work are appropriately investigated and resolved. All procedures performed in studies involving human participants were in accordance with the ethical standards of the institutional and national research committees, and with the Declaration of Helsinki (as revised in 2013). Written informed consent was obtained from the patients.