Esophageal cancer is the sixth most deadly malignancy (1), and the most common type in Asia is esophageal squamous cell carcinoma (ESCC), whereas adenocarcinoma is currently more common in Australia, the UK, the USA, and some western European countries (2). Previous studies have indicated that chemoradiotherapy can provide a median survival time of 11–22 months and a 5-year survival rate of 27%, which are similar to the outcomes after surgery (3-7). Thus, definitive chemoradiotherapy (dCRT) has become a widely accepted treatment for esophageal cancer, due to the less adverse effects (8). However, outcomes can vary broadly among patients with the same stage of ESCC, as survival is influenced by multiple factors. Furthermore, to the best of our knowledge, few studies have investigated whether pre-treatment clinical parameters can be used to predict survival among patients with ESCC who are undergoing dCRT. Therefore, the present study aimed to identify pre-treatment factors that could be used to predict survival after dCRT for ESCC. Moreover, this study aimed to develop a prognostic nomogram using these factors, and to compare that nomogram’s accuracy to that of the American Joint Committee on Cancer (AJCC) staging system. We present the following article in accordance with the TRIPOD reporting checklist (available at http://dx.doi.org/10.21037/atm-20-1460).

The study was conducted in accordance with the Declaration of Helsinki (as revised in 2013) and approved by our institutional review board (SDTHEC201901006). The requirement for informed consent was waived based on the study’s retrospective analysis of secured patient data. The results of this study did not affect the patients’ future management.

This study included 204 patients from our registry who received dCRT for ESCC between July 2013 and June 2017. To minimize heterogeneity, patients were required to be <80 years old and to have stage II–IVa squamous cell carcinoma of the thoracic esophagus, based on the eighth edition of the AJCC staging system [2017]. The other eligibility criteria were good general condition (Eastern Cooperative Oncology Group performance status of 0 or 1), normal liver function, normal renal function and normal bone marrow. The exclusion criteria were gastric cardia infiltration, distant or supraclavicular lymph node metastasis, tracheobronchial involvement, respiratory insufﬁciency, Child-Pugh class B or C cirrhosis, and symptomatic coronary heart disease. To develop the nomogram, we divided the patients into a primary cohort (169 patients who were treated between July 2013 and December 2016) and a validation cohort (35 patients who were treated between January 2017 and June 2017).

The patients underwent treatment using three-dimensional conformal radiotherapy or intensity-modulated radiotherapy (dose: 50–68 Gy), and were categorized according to whether their chemotherapy was provided concurrently (Table 1). The progression-free survival (PFS) interval was calculated from the end of radiotherapy to the first instance of recurrence, metastasis, or death.

Factor selection and construction of nomogram

Univariate Cox regression analyses were performed to identify potential prognostic factors. Variable selection was refined using the least absolute shrinkage and selection operator (LASSO) method, which is suitable for regression analysis of high-dimensional data with multicollinearity (9-12). A nomogram was constructed based on the results of the LASSO Cox regression model (13). The nomogram was subjected to bootstrapping validation (500 bootstrap resamples) to calculate a relatively corrected C-index. A calibration curve was applied to assess the nomogram and the area under the curve (AUC) was used to quantify the discriminative performance. The Hosmer-Lemeshow test was used to evaluate the nomogram’s goodness-of-fit.

Internal validation was performed using the calibration curve and AUC analysis in the validation cohort.

Decision curve analysis (DCA) was performed for all subjects to examine the nomogram’s clinical utility based on net benefits that were calculated at a series of threshold probabilities (14).

The Cox regression model with LASSO penalties was subjected to a 10-fold cross-validation method based on minimum criteria. Detailed descriptions of the LASSO algorithm and DCA are provided in the figure legends. The “glmnet” and “survival” packages in R statistic software were used for the LASSO Cox regression analysis, and the “car” package was used to calculate the variance inflation factors. The “pROC” package was applied to plot the receiver operating characteristic curve and the “rms” package was used for the nomogram’s construction and calibration plotting. The DCA was performed using the “dca.R” package. Differences were considered significant in the univariate Cox regression analyses at two-sided P-values of <0.1. All statistical analyses were performed using R software (version 3.4.4, http://www.R-project.org), EmpowerStats software (www.empowerstats.com, X&Y Solutions Inc., Boston, MA) and IBM SPSS software (version 21.0; IBM Corp., Armonk, NY, USA).

The study flowchart is presented in Figure 1. The 204 eligible patients were assigned to a primary cohort (169 patients who received treatment between July 2013 and December 2016) and a validation cohort (35 patients who received treatment between January 2017 and June 2017). The patients’ characteristics are shown Table 1. The primary and validation cohorts had similar clinical characteristics and 2-year PFS rates (P=0.381). 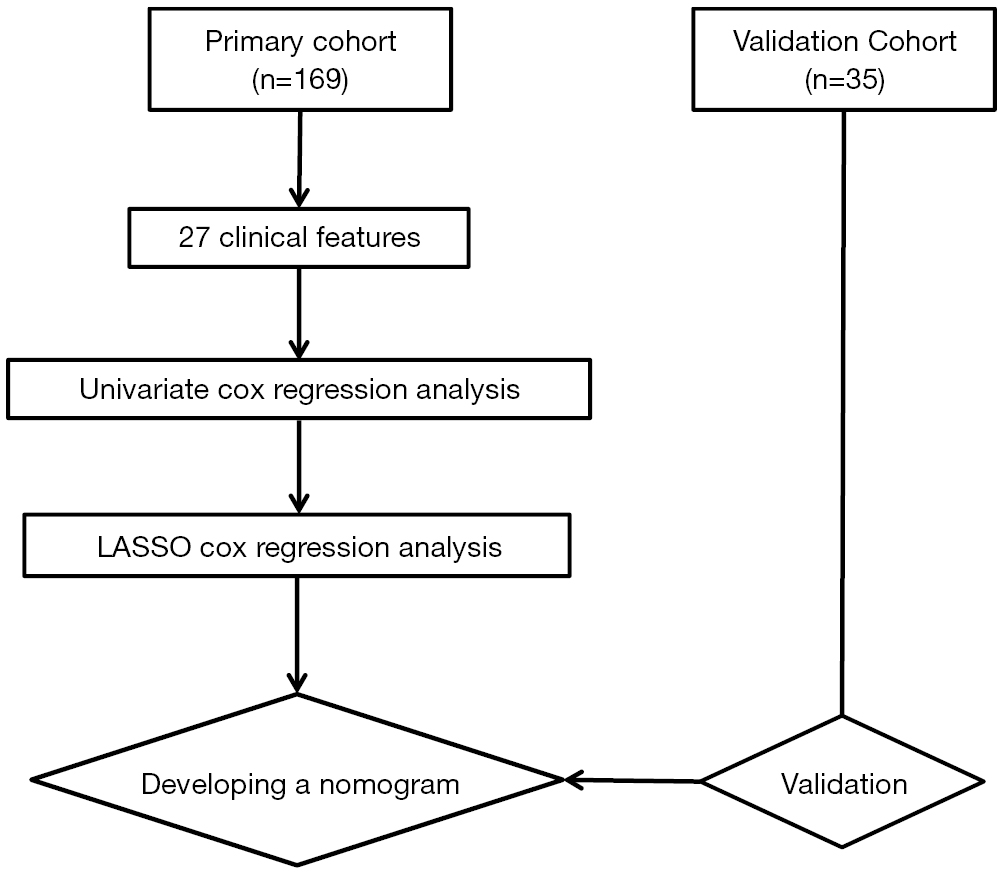 Figure 1 The flowchart of study procedure. 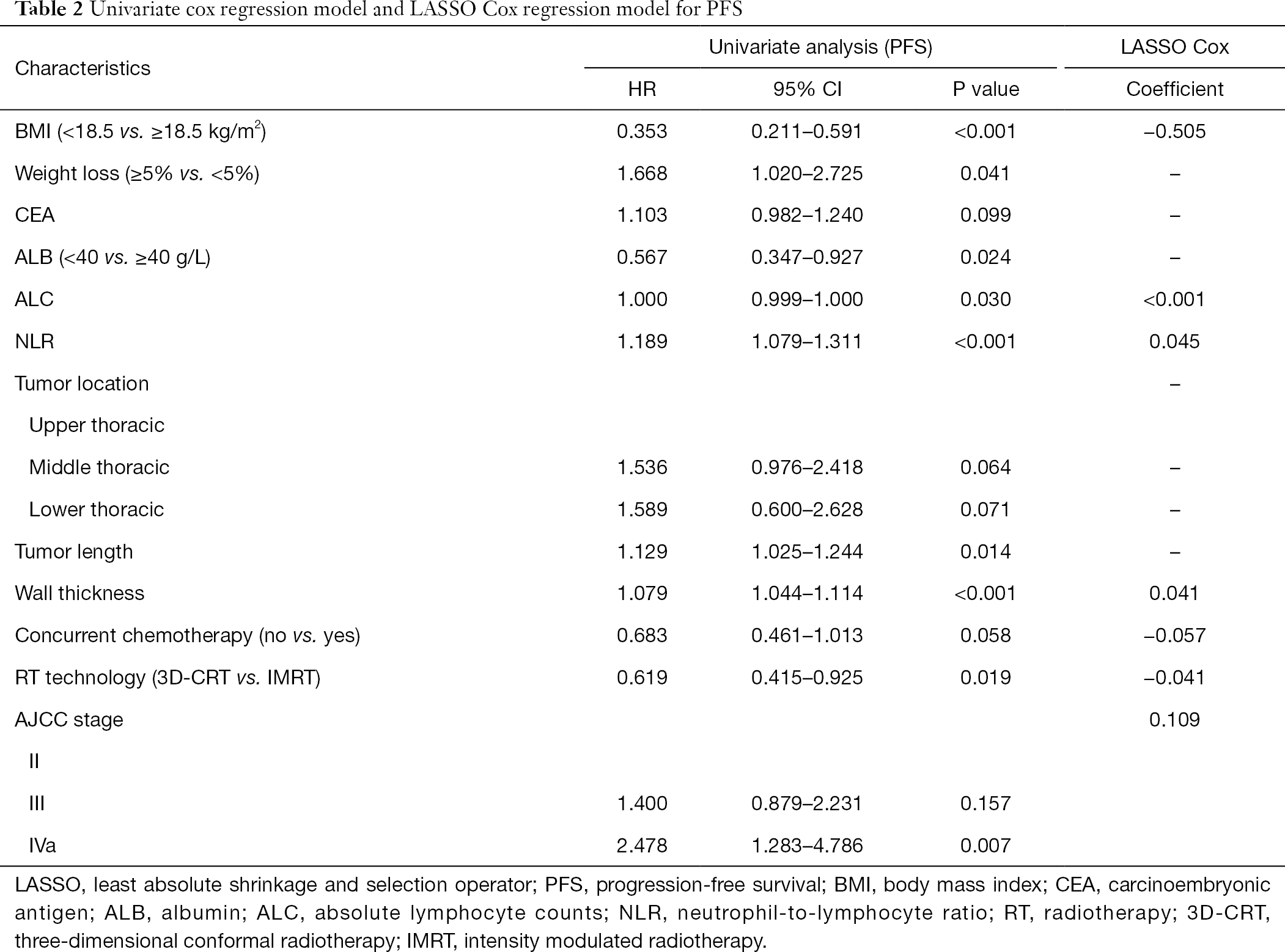 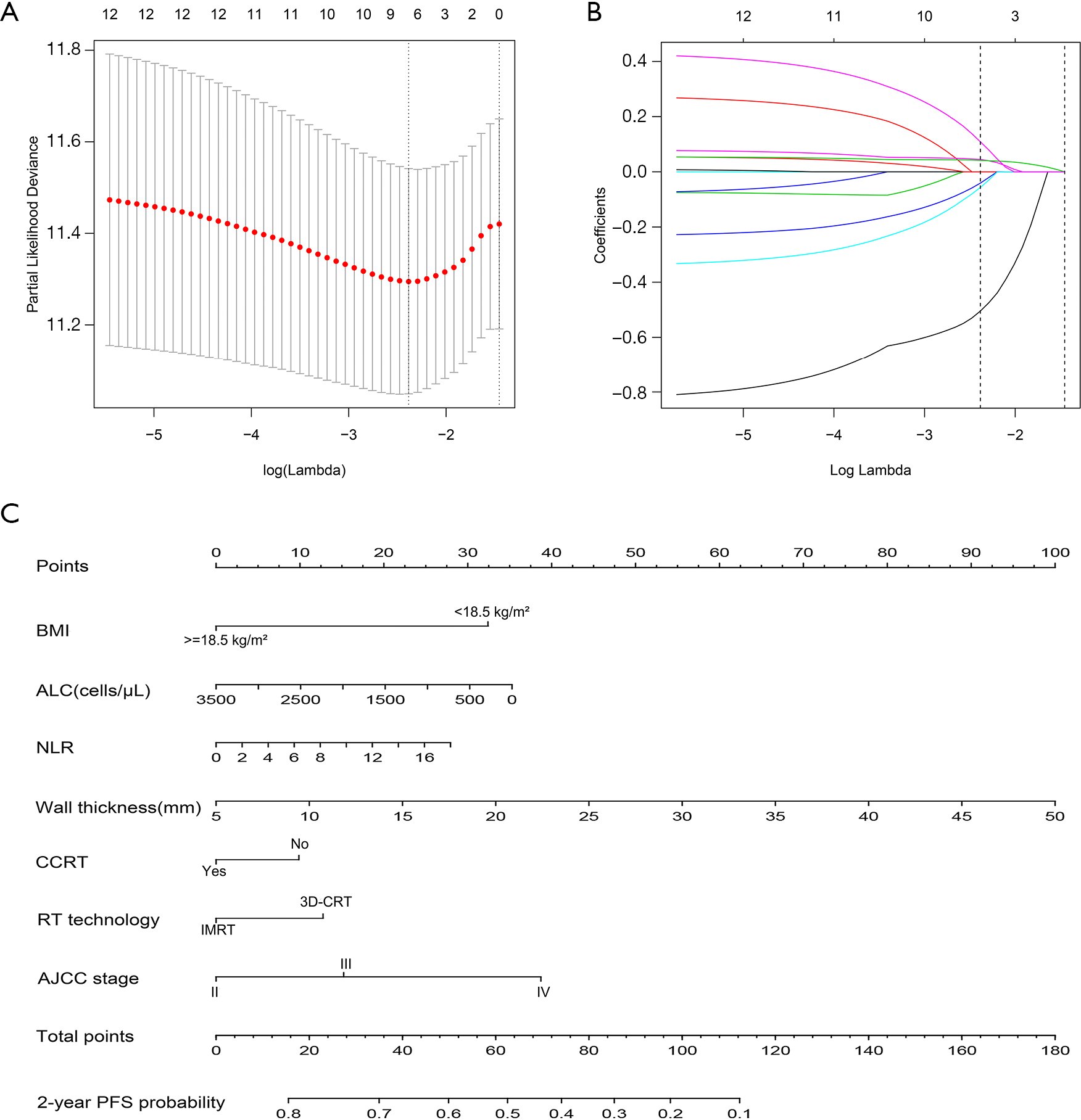 The nomogram’s performance was evaluated in the primary cohort and the C-index for PFS was 0.691 (95% CI: 0.641–0.740), which was conﬁrmed by 1,000 bootstrap resamples. The calibration curve for 2-year PFS suggested that the nomogram’s predictive ability was aligned with the actual clinical outcomes (Figure 3A). The AUC of 0.702 for 2-year PFS also indicated that the nomogram had good discriminative ability (Figure 3B). The Hosmer-Lemeshow test revealed good calibration, with a non-signiﬁcant result (P=0.201). 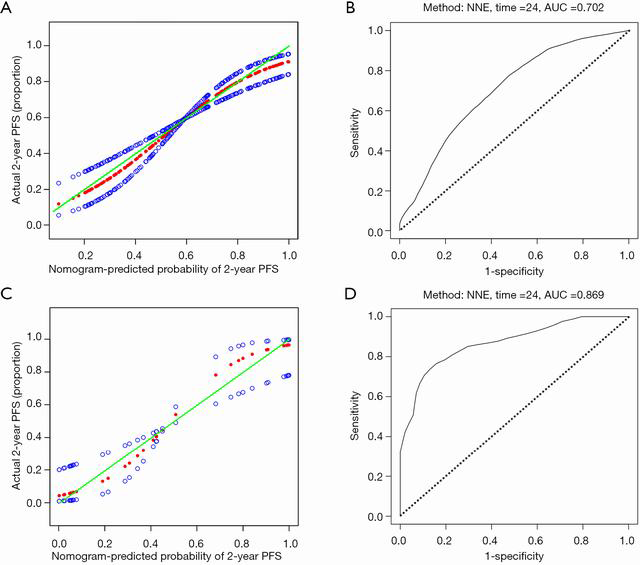 The calibration curve also revealed good agreement between the predicted 2-year PFS probability and the actual clinical outcomes (Figure 3C). The predictive accuracy was also evaluated in the validation cohort, which revealed a C-index value of 0.816 (95% CI: 0.700–0.932) and an AUC of 0.869 for predicting 2-year PFS (Figure 3D, Table S2).

Comparing the predictive accuracies of the nomogram and AJCC staging system 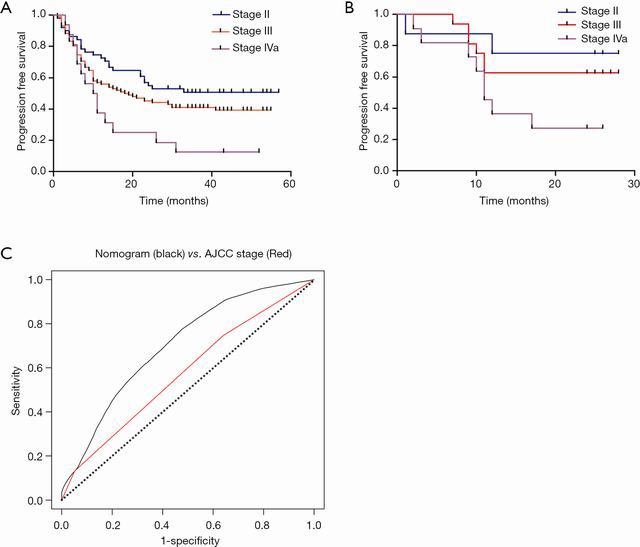 The 2-year DCA curves also revealed that the nomogram had better clinical performance than the AJCC staging system among all study subjects (Figure 5). 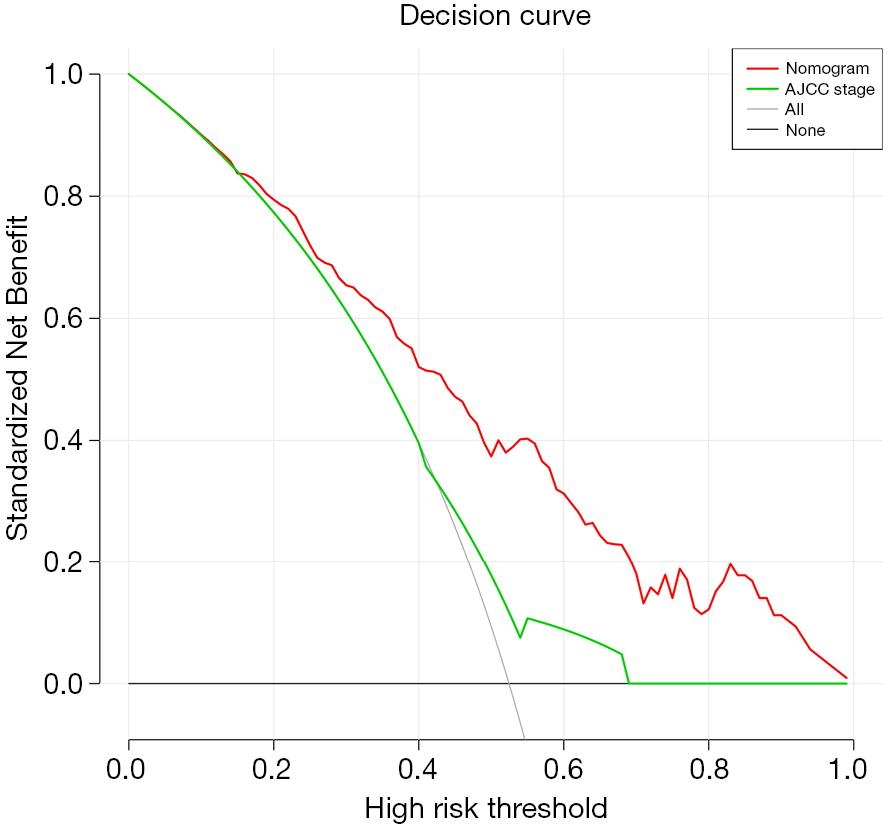 The present study evaluated 27 pre-treatment clinical parameters for patients who received dCRT for ESCC, including their general condition, hematological indicators, imaging findings, and treatment parameters. The LASSO Cox model was used to identify prognostic factors because it is suitable for analysis of data with multicollinearity, it is more robust than stepwise regression analysis, and can avoid overfitting (15). Based on the results of that analysis, the nomogram ultimately included BMI, ALC, NLR, wall thickness, concurrent chemoradiotherapy, radiotherapy modality, and AJCC stage.

Previous studies have indicated that nutritional support can help limit the adverse effects of radiotherapy and improve outcomes among patients with colorectal, head, and neck cancers (16,17). However, the baseline nutritional status is not generally considered for patients with esophageal cancer who are receiving dCRT. The present study revealed that survival outcomes were correlated with baseline BMI, weight loss, and albumin serum concentration, which are nutritional indicators (Table 2). Moreover, a baseline BMI of <18 kg/m2 was independently associated with poor survival, which suggests that baseline nutritional parameters may be related to dCRT response and survival among patients with esophageal cancer. Therefore, adding supportive nutritional management to the dCRT regimen might help improve survival outcomes.

Lymphocytes in the peripheral blood are considered crucial immune components and reflect immune responsiveness (18). Furthermore, survival outcomes for various cancers can be predicted by immune and inflammatory factors, such as ALC and NLR (19-22). Moreover, Davuluri et al. demonstrated that CRT dramatically reduced the lymphocyte count in patients with esophageal cancer, and that CRT-induced lymphopenia was associated with poor survival outcomes (23). Similarly, the present study revealed that the pre-treatment ALC and NLR values were independently associated with PFS after dCRT for ESCC. Therefore, caution is warranted when selecting CRT for patients with pre-treatment lymphopenia, who might benefit from a modified dosage or alternative treatment methods.

Several studies have demonstrated that, relative to sequential CRT, concurrent CRT can provide a significantly higher survival rate among patients with esophageal cancer. Although it had been suggested that concurrent CRT would be associated with more adverse effects, clinical experience has revealed that concurrent CRT is well-tolerant and can be recommended to patients with esophageal cancer. Retrospective studies have also suggested that the dosimetric advantage of intensity-modulated radiotherapy, relative to three-dimensional conformal radiotherapy, was related to improved clinical outcomes (26).

The AJCC staging system provides impressive prognostic value for some patients with ESCC, although it was not speciﬁcally developed for the prediction of post-treatment outcomes (27). Moreover, among patients undergoing dCRT for ESCC, the predictive accuracy of the AJCC staging system might be affected by other important factors, such as nutritional status, hematological biomarkers, and therapeutic regimen. Thus, we developed a comprehensive nomogram that evaluates various important pre-treatment parameters, such as nutritional status (BMI), radiographic characteristics (wall thickness), immune and inflammatory biomarkers (ALC and NLR), therapeutic regimen (concurrent chemotherapy and radiotherapy modality), and AJCC stage. The performance of the nomogram was satisfactory based on the calibration curve and C-index values (primary cohort: 0.691, validation cohort: 0.816). Moreover, we found that the nomogram was better than the AJCC staging system for predicting survival outcomes, and the DCA results also demonstrated that our nomogram provided greater clinical value than the AJCC grading system. In addition, Factors included in the nomogram can be judged during a pre-treatment clinical examination, which would be useful in clinical practice for predicting survival after dCRT for ESCC. Finally, most patients who do not experience recurrence within 2 years after dCRT are likely to remain without recurrence during the first 5 years after treatment (19). Thus, our model may help predict the likelihood of long-term survival (28).

The present study has several limitations. First, we did not consider all potentially relevant characteristics, such as genetic markers, tumor differentiation status, and pulmonary function. Second, the specific chemotherapy regimens were not analyzed. Third, the retrospective study design is associated with possible sources of bias. Thus, multicenter studies with larger sample sizes are needed to validate our nomogram, identify areas for improvement, and generate additional evidence regarding its clinical application.

We developed a nomogram for ESCC that included BMI, ALC, NLR, wall thickness, concurrent chemoradiotherapy, radiotherapy modality, and AJCC stage. This nomogram was useful for predicting 2-year PFS among patients who were receiving dCRT for ESCC. Therefore, it may be prudent to consider these pre-treatment parameters when planning dCRT for ESCC patients. Our new nomogram may be useful for predicting clinical and survival outcomes among patients who are going to receive dCRT for ESCC.

Funding: This study was funded by the Natural Science Foundation of China (NSFC 81672995) and the Key Research and Development Program of Shandong Province (2016GSF201133).

Reporting Checklist: The authors have completed the TRIPOD reporting checklist. Available at http://dx.doi.org/10.21037/atm-20-1460

Conflicts of Interest: All authors have completed the ICMJE uniform disclosure form (available at http://dx.doi.org/10.21037/atm-20-1460). The authors have no conflicts of interest to declare.

Ethical Statement: The authors are accountable for all aspects of the work in ensuring that questions related to the accuracy or integrity of any part of the work are appropriately investigated and resolved. The study was conducted in accordance with the Declaration of Helsinki (as revised in 2013) and approved by our institutional review board (SDTHEC201901006). The requirement for informed consent was waived based on the study’s retrospective analysis of secured patient data.