Chronic cerebrospinal venous insufficiency (CCSVI), as a state of impaired intracranial or extracranial venous drainage, has been heatedly discussed over its role in the pathogenesis of multiple sclerosis (MS) in the last decades (1-4). However, with the increasing evidence of CCSVI not unique to MS (5-7), the relationship between CCSVI and other autoimmune diseases has emerged. Given that autoimmune diseases are associated with hypercoagulation state due to elevated autoimmune antibodies, venous thromboembolism (VTE) is one of the most common complications. Nevertheless, studies on autoimmune disease-mediated cerebral venous sinus thrombosis (CVST) are rather rare. Only a few cohort studies of patients with systemic lupus erythematosus (SLE) (8-11) or Behçet’s disease (BD) (12,13) were reported to have CCSVI as well. Moreover, several case series presented patients with the antiphospholipid-antibody syndrome (APS) (14,15), inflammatory bowel disease (IBD) (16), or Wegener's granulomatosis (17,18) with the coexistence of CVST.

The clinical features of autoimmune disease-mediated CCSVI are still unclear. Moreover, we also found a number of patients with CCSVI had positive tests of immunological biomarkers, such as decreased complement 3 (C3) or complement 4 (C4), increased erythrocyte sedimentation rate (ESR), immunoglobulin G (IgG), or immunoglobulin E (IgE), despite negative findings of antinuclear bodies or antineutrophil cytoplasmic antibodies. Thus, we aimed to enroll CCSVI patients with confirmed autoimmune disease or suspected/subclinical autoimmune disease and provided comprehensive clinical features of CCSVI with or without immunological etiology. Furthermore, thanks to the intricate relationship between coagulation, inflammation (adaptive immune system), and complement pathway (innate immune system), we evaluated relevant biomarkers in this study. The following article is presented in accordance with the STROBE reporting checklist (available at http://dx.doi.org/10.21037/atm-20-4201).

A total of 255 consecutive patients with confirmed CCSVI were enrolled, with admission in the Department of Neurology, Xuanwu Hospital, Capital Medical University, from 2017 to 2019. The study was conducted in accordance with the Declaration of Helsinki (as revised in 2013). The study was approved by Ethics Committee of Xuanwu Hospital, Capital Medical University (2019-006), and informed consent was taken from all individual participants.

Inclusion criteria were as follows: (I) patients with CCSVI, including internal jugular vein stenosis (IJVS), cerebral venous sinus stenosis (CVSS), or CVSS combined with IJVS were confirmed by contrast-enhanced magnetic resonance venography (CE-MRV) or digital subtraction angiography (DSA); (II) patients did not have parenchymal lesions due to CCSVI; (III) the course of the disease was at a subacute or chronic stage, defined as an interval of more than 4 weeks; (IV) patients with autoimmune diseases were confirmed by the Department of Rheumatology, Xuanwu Hospital, Capital Medical University.

Subgroup analysis was conducted based on etiology. CCSVI patients with immunological etiology were defined as the coexistence of confirmed autoimmune disease or suspected/subclinical autoimmune disease, while CCSVI patients with non-immunological etiology included CVST-related CCSVI or bone/vessel/lymph node-compression-related CCSVI.

Immunological, inflammatory, and thrombophilia biomarkers assay in the blood sample

Thrombophilia biomarker assay evaluated both antigens, including platelet, fibrinogen, d-dimer, antithrombin-III, protein C, and protein S, as well as activity, such as thrombin time, partial thromboplastin time (PTT) and activated PTT (aPTT) in plasma sodium-citrate sample without platelet depleted. Cutoff values were based on the referential interval in the Laboratory of Xuanwu Hospital, Capital Medical University.

Bartlett’s test for equal variances and the Shapiro-Wilk normality test for distribution were conducted for each continuous variable. We then used the Mann-Whitney U test or Fisher’s exact test to compare continuous variables or categorical variables between patients with immunological etiology CCSVI and non-immunological etiology CCSVI. Difference between levels of baseline inflammatory markers [NLR, PLR, and red blood cell distribution width (RDW)] and that at discharge was tested by Wilcoxon signed-rank test. Correlation coefficients were calculated with Spearman’s test among age, baseline NLR, PLR, RDW, IL-6, CRP, and NSE. Quantitative variables with a normal distribution were specified as mean ± standard deviation, and those with abnormal distribution were expressed as median with interquartile range (IQR). Differences were considered significant at a two-sided P<0.05 level. Analyses were performed with Stata software (version 15.0 SE, Stata Corp., LP, Texas, USA) and R software [version 3.6.2 (2019-12-12)].

A total of 255 patients (104 males and 151 females) with CCSVI were enrolled in this retrospective study, of which more than 95% had a disease course over 1 month (chronic stage), and followed up with 18.13±5.58 months. Patients most likely presented with sleep disturbances (60.4%), eye discomfort (58.4%), head noise (53.7%), tinnitus (51.8%), headache (45.1%), and hearing loss (32.2%). Combined risk factors were commonly seen, for instance, thrombophilia state, overweight, hyperlipidemia, hypertension, anemia, and suspected thyroid disorders. Based on locations of CCSVI, IJVS, CVSS, and CVSS combined with IJVS were found in 68.2%, 16.9%, and 14.9% of enrolled patients, respectively. Treatments for CCSVI patients were antiplatelet drugs (60.0%), anticoagulants (32.2%), and endovascular therapy (12.5%). Details were displayed in Table 1.

Difference between CCSVI with or without immunological etiology 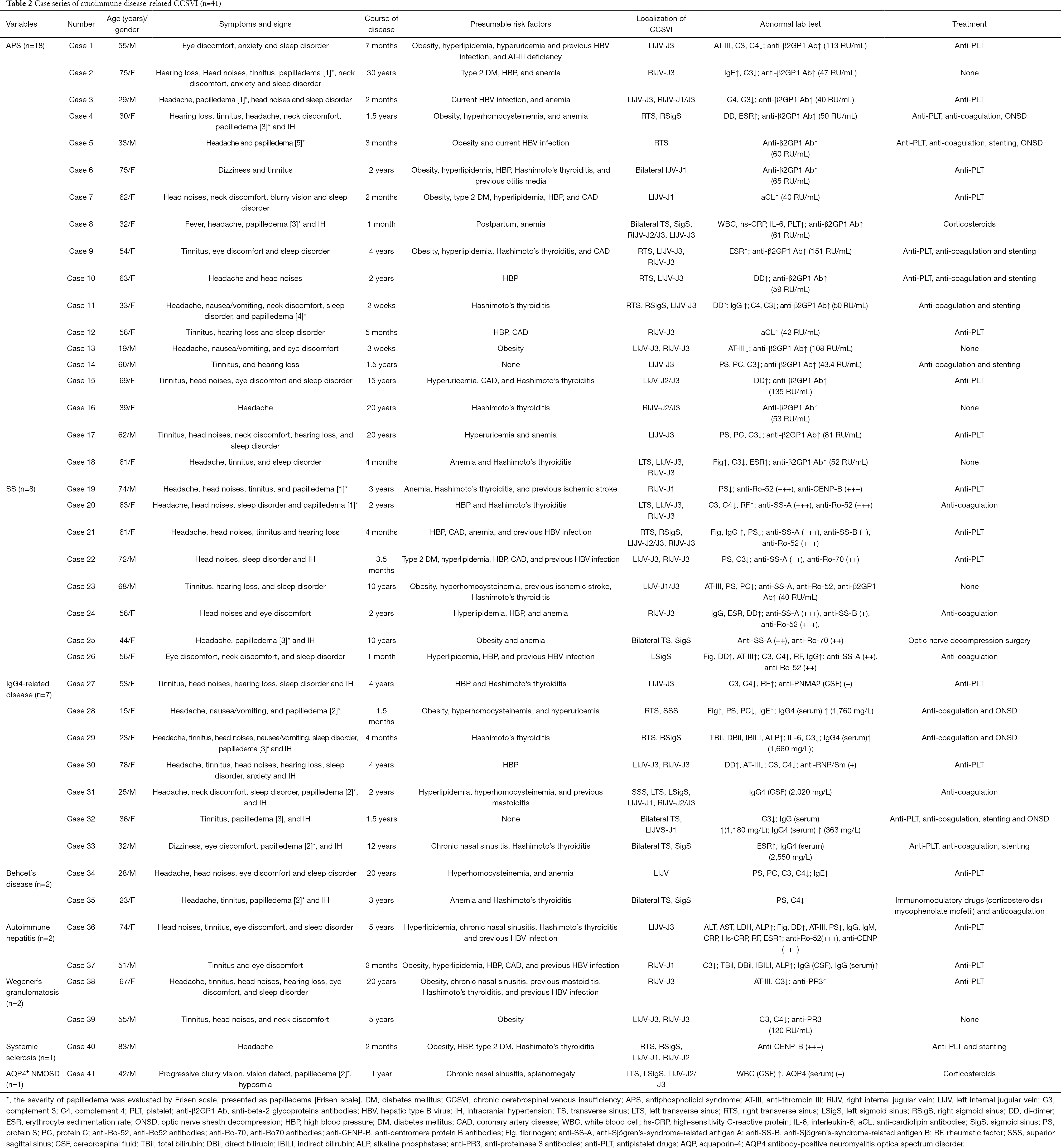 There was a significant difference between CCSVI with or without immunological etiology in terms of symptoms and signs (Table 1). CCSVI patients with suspected/subclinical autoimmune disease presented at an older age on admission (P=0.017) and had a higher prevalence of head noises (P=0.045), while those with confirmed autoimmune disease were more prone to have papilledema (P=0.004). Intriguingly, the groups with immunological etiology did not show a higher incidence of thrombophilia or increased pro-inflammatory factors (e.g., neutrophil, IL-6) as we previously expected than the group with non-immunological etiology. However, patients with non-immunological etiology had a higher baseline level of CRP (P=0.015), which further predicted that an independent inflammatory process might involve in the pathogenesis of CCSVI. 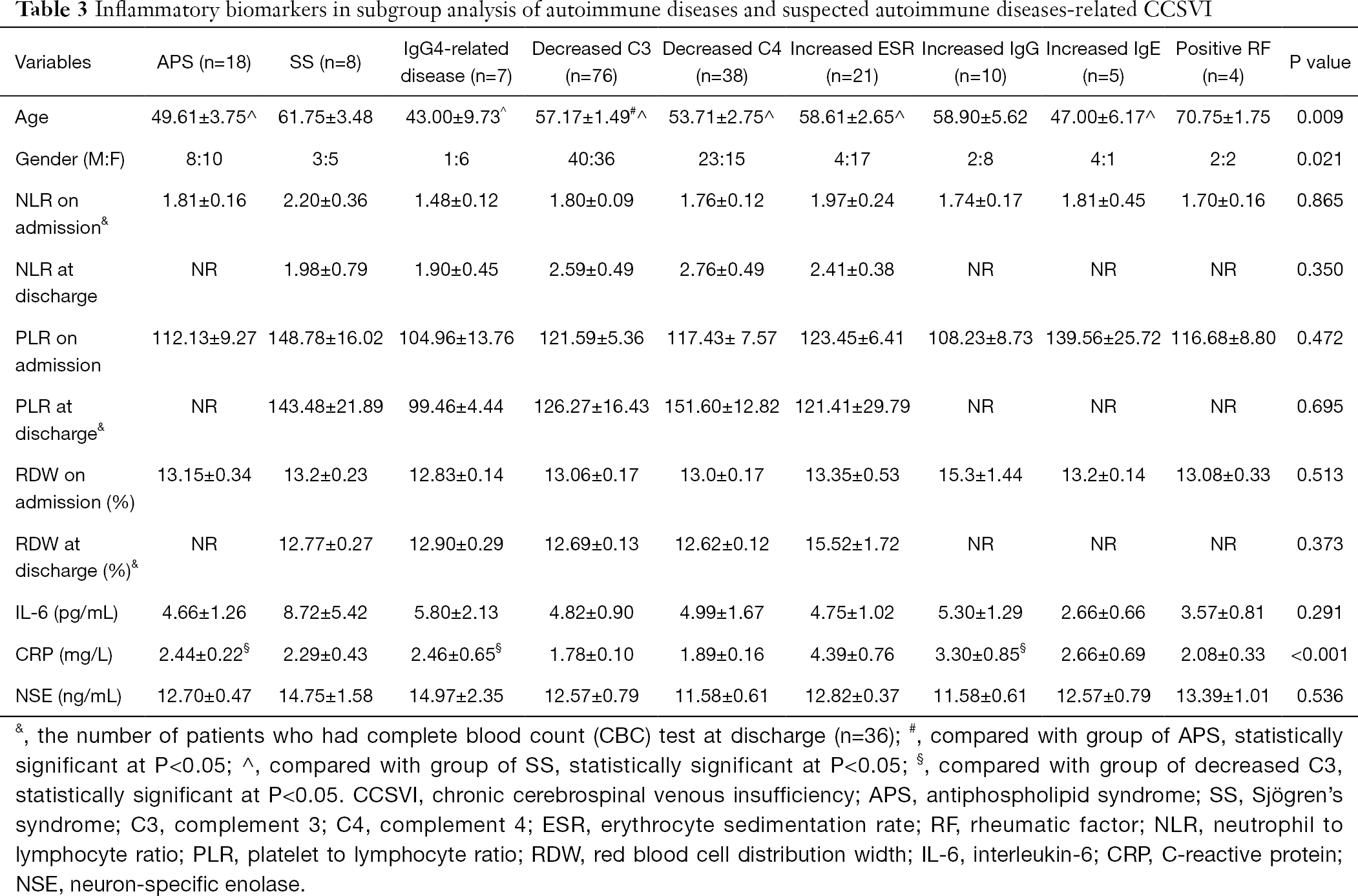 Correlation coefficients were calculated with Spearman’s test among age, baseline NLR, PLR, RDW, IL-6, CRP, and NSE in groups with non-immunological etiology (Figure 1A), with suspected/subclinical autoimmune disease (Figure 1B), and with confirmed autoimmune disease (Figure 1C). As shown in Table 4, baseline PLR level was moderately correlated to NLR and CRP in the group of CCSVI patients with non-immunological etiology and suspected/subclinical autoimmune disease, indicating CCSVI itself may relate to the inflammatory process (Table 4, a and b). However, the level of IL-6 was only positively associated with CRP and age in the group of CCSVI patients with confirmed autoimmune disease (Table 4, c). 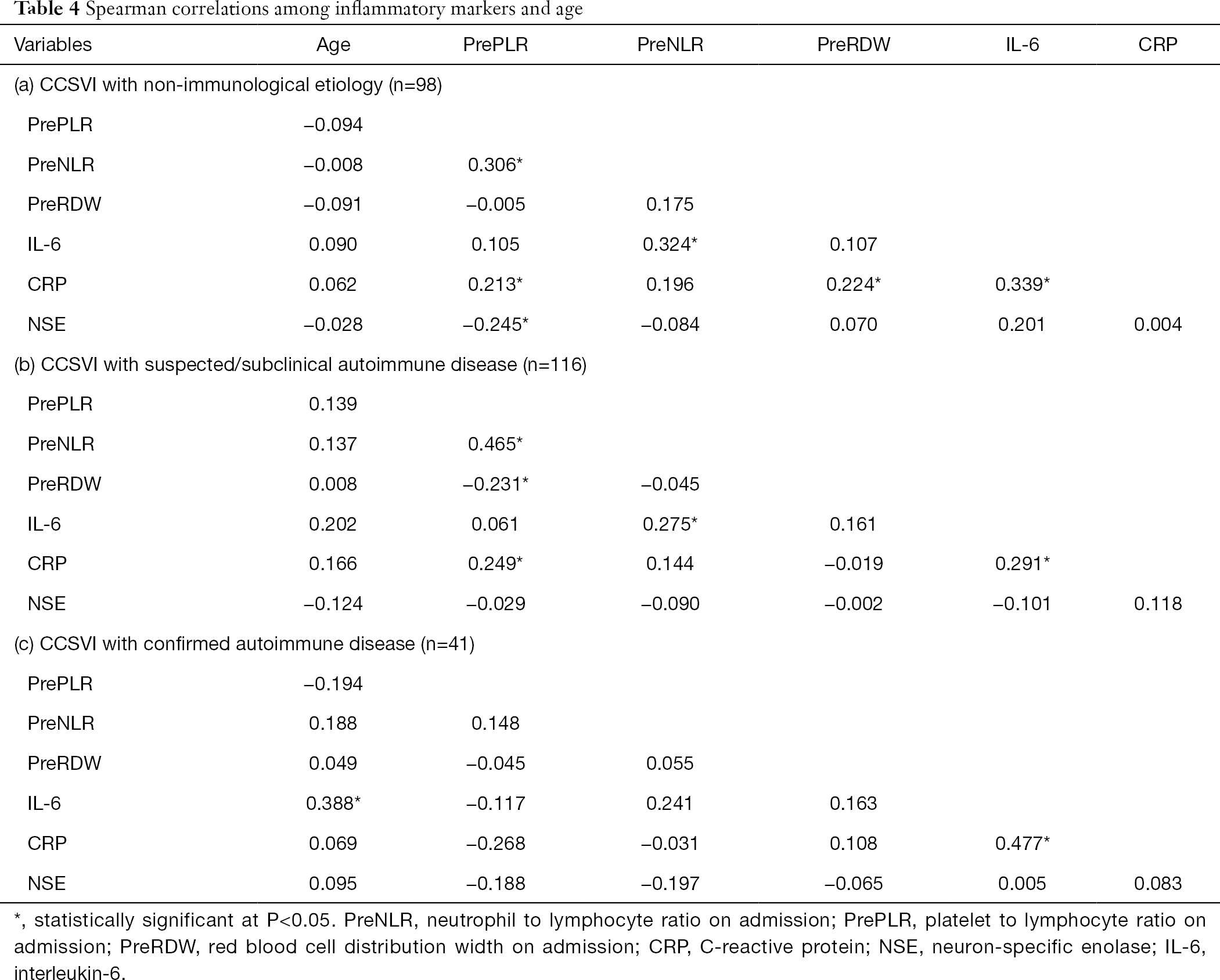 Figure 1 Spearman’s correlations between age and inflammatory biomarkers in CCSVI with non-immunological etiology (A), with suspected/subclinical autoimmune disease (B), and with confirmed autoimmune disease (C). CCSVI, chronic cerebrospinal venous insufficiency.

The intricate relationship between inflammation (adaptive immune system) and complement pathway (innate immune system) and hemostasis (coagulation and thrombolysis) in immune-complex-mediated autoimmune diseases was reviewed in several studies (22-24). Based on their common points, we preferred to explain the mechanism from two perspectives: on a physiological level, the coexistence of hemostatic and inflammatory mediators is served as the first line to protect the body from self-antigens and non-self antigens, also termed as “immunothrombosis” or “thromboinflammation” in recent years (22,24). The common structural characteristic of consisting serine proteinases with trypsin-like activity contributes to the precise interplay between the complement system, the coagulation, and fibrinolytic cascade (25). Certain coagulation factors (FXa, thrombin, plasmin) have C3 and C5 convertase activity, contributing to an additional pathway of complement activation (21,26). Complement-derived inflammatory mediators (anaphylatoxin), such as C3a, C4a, and C5a, could increase vascular permeability, activate neutrophils, promote the release of tumor necrosis factor (TNF) from monocyte, upregulate tissue factor (TF), then initiating extrinsic coagulation pathway (27). Platelet can also be activated by the deposition of C4d split fragments, resulting in the facilitation of the coagulation process (20). While on the pathological level, hypocomplementemia is frequently prevalent in patients with APS and SLE, which predominantly relates to the chronic inflammatory process with the basis of the pathophysiology of immune complex-mediated diseases. The overly activated immune system causes the production of self-antigens with unbalanced consumption of complements. With the inverse relationship between complements and their derivatives, anaphylatoxin (C3a, C4a, and C5a) would further cause hypercoagulation state and even thrombotic events. Meanwhile, complement regulatory factors also decrease due to either attack from autoimmune antibodies, or increased consumption or lower expression of relevant genes (28,29). For example, during the pathogenesis of APS, beta-2 glycoprotein-I (β2-GPI) undergoes a conformational change from a circular form to an elongated form that can bind C3; then, C3 exposes its binding sites, which is more susceptible to degradation by complement factor H (CFH) and factor I (30). Moreover, β2-GPI shares structural similarity to CFH so that antibodies could also combine with CFH (31). With the growing appreciation of complement activation and thrombosis in immune-complex-mediated autoimmune diseases, novel therapies would be fostered, including antiplatelet, anticoagulants as immunomodulators, and targeted molecular therapy toward complements (25,26).

There are several limitations in our study. This is a real-world case-control study of patients with well-defined CCSVI. Patients with a history of autoimmune diseases usually underwent long-term standardized immunomodulation treatment prior to their enrollment, so that the inflammatory biomarker assay tended to be normal despite positive findings of autoimmune antibodies. Therefore, further studies on acute thrombotic events of autoimmune disease are needed. Moreover, our findings indicated the difference in the inflammatory activity among immunological diseases. Based on the complementary relationship between inflammation and thrombosis, we further raised a question on whether the severity of immunological diseases was correlated with increased inflammatory activity and elevated risk of thrombotic events.

We would like to thank Prof. Yuchuan Ding for his help in polishing the language of our paper.

Reporting Checklist: The authors have completed the STROBE reporting checklist. Available at http://dx.doi.org/10.21037/atm-20-4201

Conflicts of Interest: All authors have completed the ICMJE uniform disclosure form (available at http://dx.doi.org/10.21037/atm-20-4201). The authors have no conflicts of interest to declare.

Ethical Statement: The authors are accountable for all aspects of the work in ensuring that questions related to the accuracy or integrity of any part of the work are appropriately investigated and resolved. The study was conducted in accordance with the Declaration of Helsinki (as revised in 2013). The study was approved by Ethics Committee of Xuanwu Hospital, Capital Medical University (2019-006), and informed consent was taken from all individual participants.