Esophageal cancer is a malignant tumor characterized by higher morbidity and mortality, and is responsible for an annual 572,000 new cases and 509,000 deaths worldwide (1). In China, esophageal squamous cell carcinoma (ESCC) is the most common histologic type of esophageal cancer (2). Esophageal squamous cell carcinoma (ESCC) is usually diagnosed at a locally advanced stage. Despite the significant progress in its comprehensive treatment in recent years, its prognosis is still not satisfactory, and the reported 5-year survival rate is between 29.3% and 38.2%, with an even worse rate for patients with tumors involving the lymphatic system (3-5).

Neoadjuvant approaches have become increasingly used for esophageal carcinoma, which proved to improve prognosis (6). However, only a few clinical studies have reported the value of postoperative adjuvant treatment for patients undergoing radical esophagectomy (7-9). Moreover, the patients in those retrospective studies usually did not receive the same chemotherapy or radiotherapy regimen, which might cause bias (5,7,10). Thus far, the most appropriate treatment modality for pathologic node-positive esophageal cancer, especially for squamous cell carcinoma, is still not well established. Therefore, an analysis of the various treatment strategies as potential prognostic factors for survival, including an assessment of operative procedures and postoperative adjuvant treatment, is essential.

The purpose of this clinical study was thus to focus on the prognostic factors which are favorable for survival and to identify the most beneficial adjuvant treatment available.

We present the following article in accordance with the Tripod reporting checklist (available at http://dx.doi.org/10.21037/atm-20-4893).

We retrospectively collected the clinical data and follow-up results of 506 thoracic ESCC patients who were admitted to the Thoracic Department of Fujian Medical University Union Hospital and accepted surgical treatment from January 2013 to October 2015. The study’s inclusion criteria were the following: (I) patients who received a radical (R0) resection surgery with two- or three-field lymphadenectomy; (II) patients who did not receive any neoadjuvant therapy, such as preoperative radiotherapy or chemoradiotherapy, before the surgery; (III) patients who were ESCC pathological type; (IV) patients who were confirmed to have lymphatic metastasis by postoperative pathology. The study’s exclusion criteria were the following: (I) patients who were unanalyzable due to incomplete follow-up information, (II) who had a diagnosis of multiple primary malignant neoplasms, or (III) who had serious basic disease. Figure 1 provides a flow diagram of the sequential exclusions used to create the cohort. We defined pathological stage according to the seventh edition of the Union for International Cancer Control esophageal cancer staging system (11). This single-institution, retrospective study was approved by the institutional review board of Fujian Medical University Union Hospital (No. 2015KY021) and informed consent was taken from all the patients. The study was conducted in accordance with the Declaration of Helsinki (as revised in 2013). 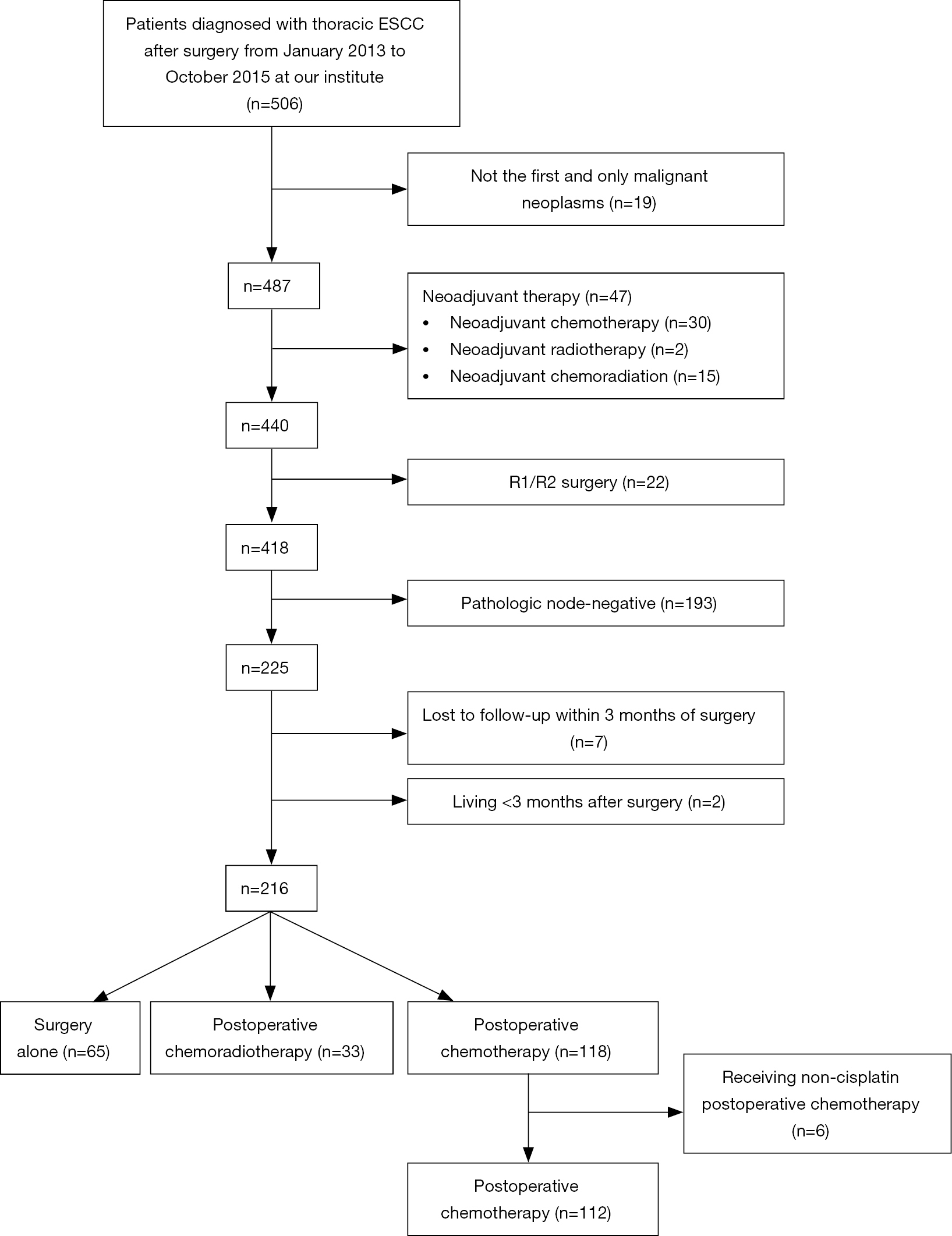 Before the operation, patients were intubated with a common single-lumen tube without bronchial blocker, and turned to the semi-prone-position. The majority of patients went through radical minimally invasive esophagectomy which consisted of a right thoracotomy with two-field lymphadenectomy and gastric tube reconstruction. We performed a two-field lymph node dissection of all the patients and added a cervix node dissection depending on the frozen pathological results of lymph nodes along the right recurrent laryngeal nerve or preoperative imaging.

Baseline patient characteristics and postoperative outcomes were compared using analysis of variance for continuous variables and Chi-square test for discrete variables (12). The primary outcome was OS and DFS which were evaluated using the Kaplan-Meier method and compared with the log-rank test. Univariate and multivariate Cox proportional hazard regression was performed to find the association between the clinicopathologic characteristics and OS, and to identify the prognostic parameters for survival. Statistically significant variables (P<0.05) from the multivariate Cox regression analysis were entered into the nomograms. The scheme of nomogram was drawn using R with the rms package. Calibration curves were plotted to assess the agreement between the actual survival and the predicted survival at 3 years in the primary cohort. All the data obtained from this study were analyzed with the aid of SPSS version 22.0 and R version 2.8.1 (R foundation for Statistical Computing). A P value of <0.05 was considered statistically significant for all procedures.

Table 1 presents the characteristics of 210 patients. The final cohort included 210 patients who underwent esophagectomy without neoadjuvant therapy with pathologic node-positive esophageal cancer. Among them, 65 patients were treated with surgery alone (group S), 112 received postoperative chemotherapy alone following surgery (group CT), and 33 underwent postoperative adjuvant chemoradiotherapy (group CRT). The patient characteristics of the three groups were found to be comparable. In total, 164 (78.1%) patients were male, and the median age of all patients was 58.2 years. A total of 120 (57.1%) patients had a history of smoking, and the same number had a history of alcohol consumption. Almost all patients (97.6%) underwent thoracoscopic surgery, and 155 persons were treated with two-field lymphadenectomy. The median number of harvested lymph nodes of all patients was 35.1, and the median number of positive lymph nodes was 3.38, but neither was statistically significant across the three groups. 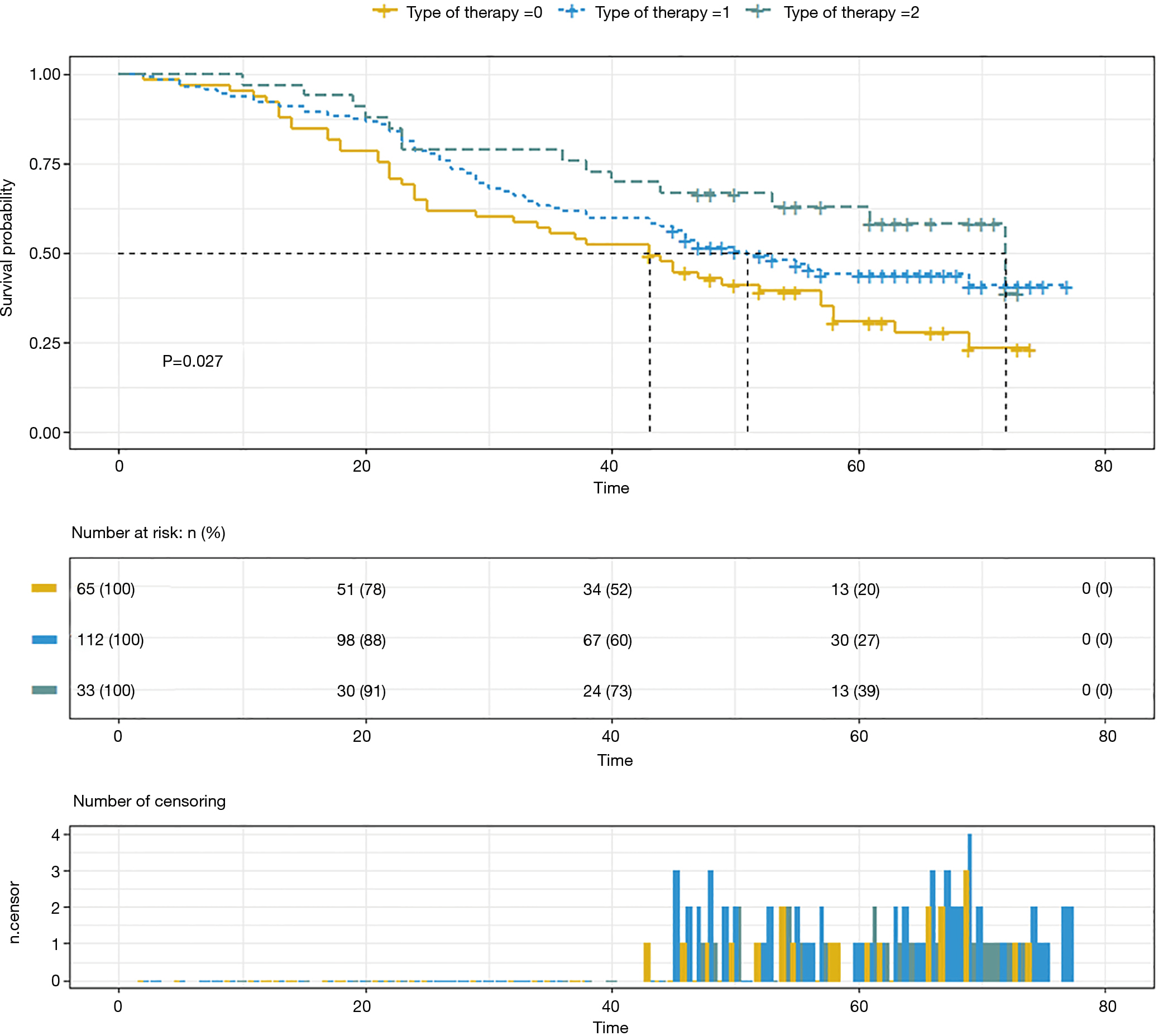 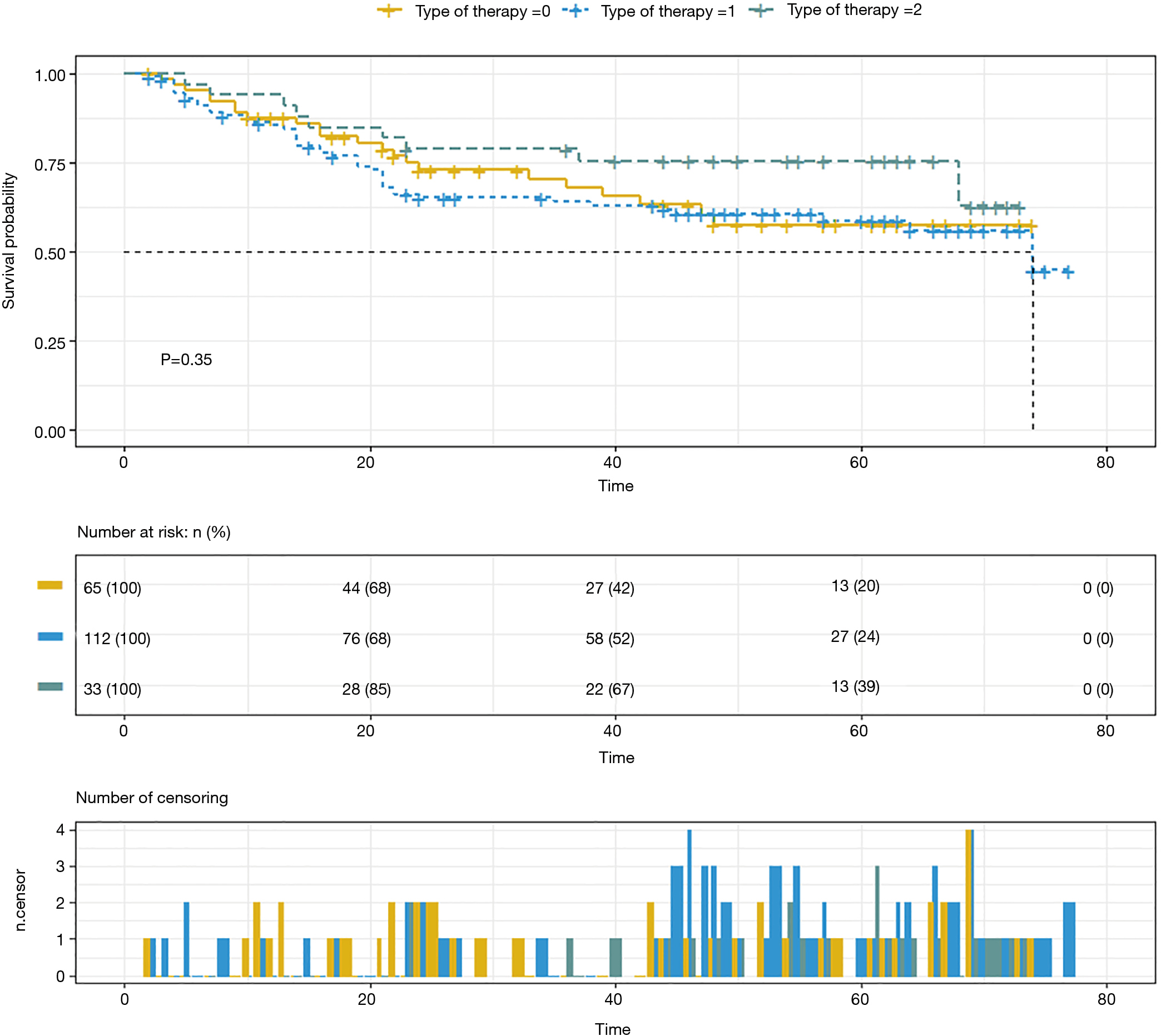 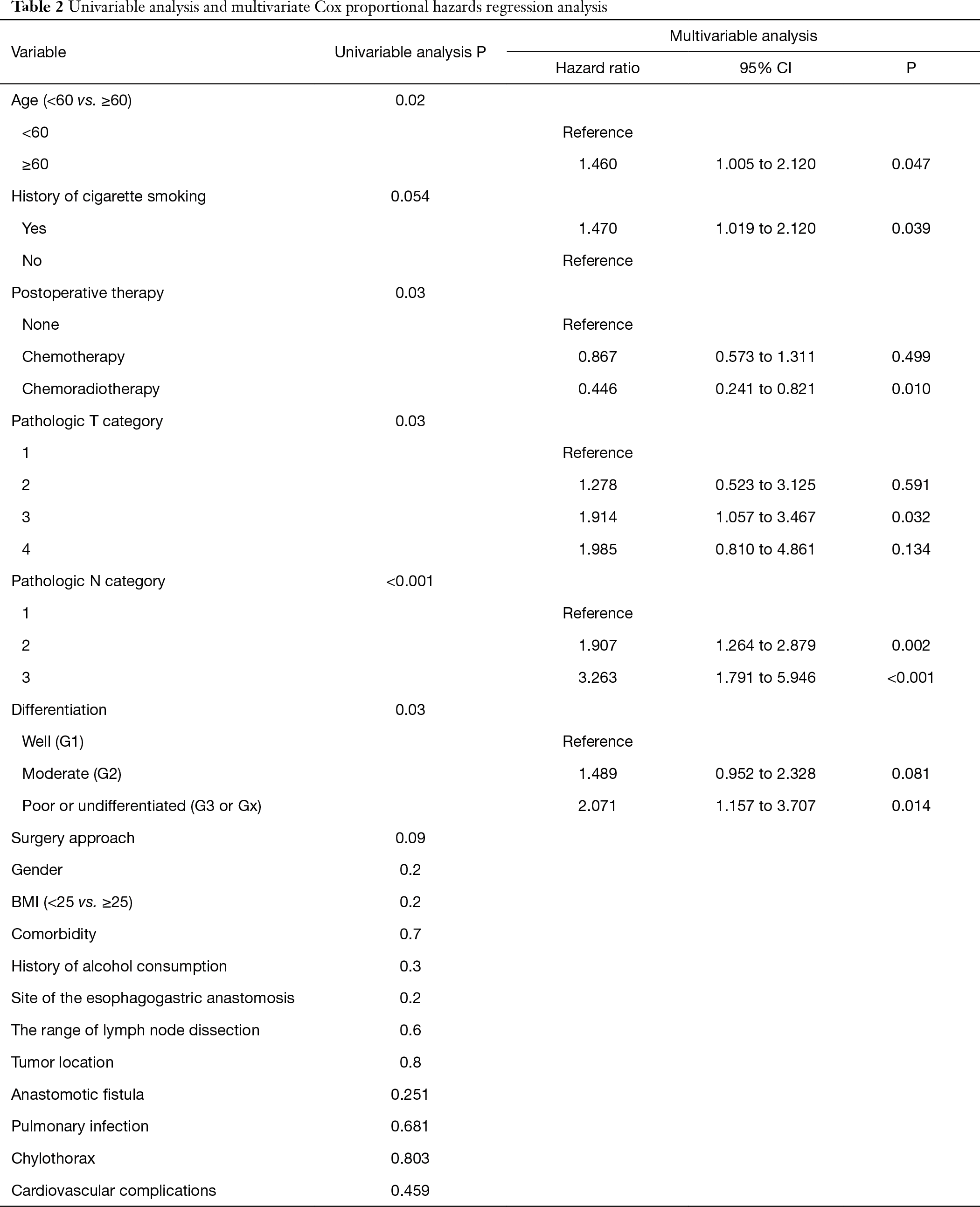 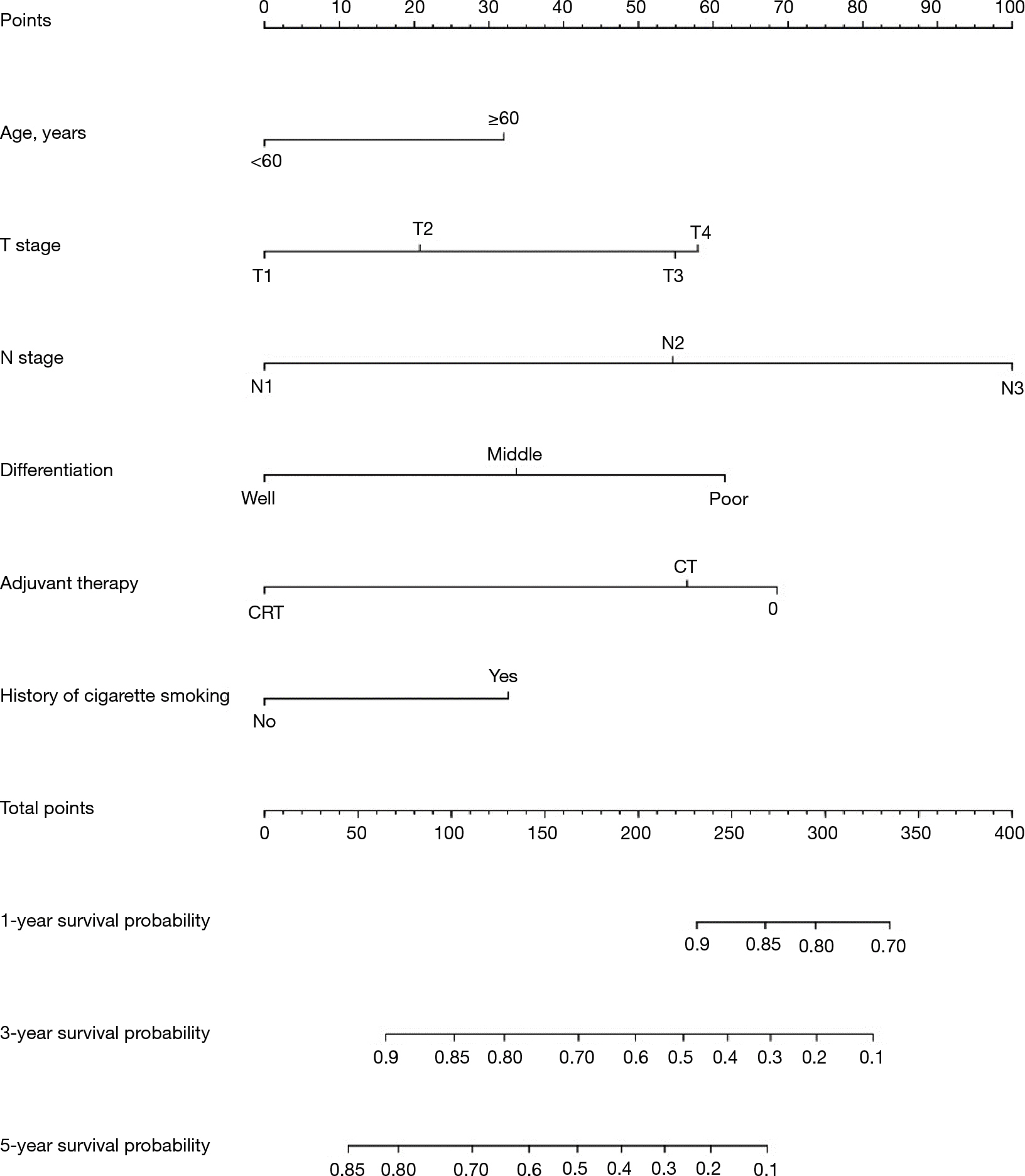 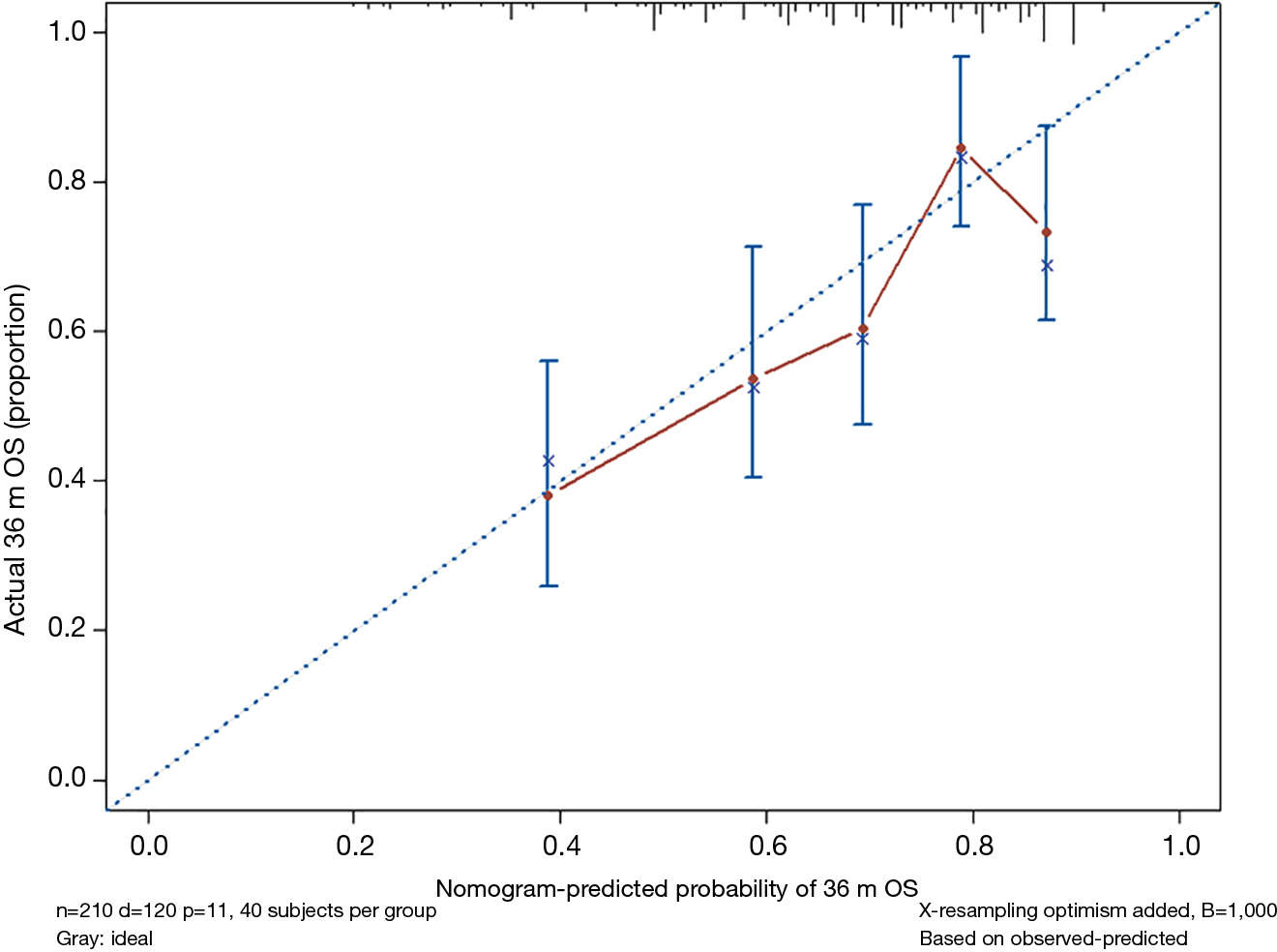 Radical surgical resection is the standard treatment for resectable thoracic esophageal cancer and has proven effective based on certain results. However, owing to the high rate of recurrence or metastasis, the OS of radical resections still remains poor. The meta-analysis (10) we conducted in 2013 indicated that relatively few studies have analyzed the effectiveness of postoperative CRT for patients with EC in contrast to neoadjuvant CRT. The chief reason for this may be the difficulty faced by the patients in bearing the side effects of postoperative CRT. After surgery, it is not uncommon for postoperative patients to become debilitated and develop postoperative complications. Fortunately, with the advancement in surgical techiques, surgeons can perform operations less invasively than in traditional surgery (13-15). In addition, with the improvement of radiotherapy equipment and the optimization of radiotherapy and chemotherapy, the side effects of postoperative treatment were tolerable and gradually reduced, and only few serious side effects were reported (10,16). Kang et al. conducted a meta-analysis of 2,165 patients and found that postoperative chemoradiotherapy yielded significant survival benefit and improved local-regional control with tolerable toxicity for patients with EC (16). We thus conducted this retrospective study to determine whether postoperative adjuvant chemoradiotherapy and adjuvant chemotherapy can provide meaningful treatment benefit for ESCC patients.

The current treatment of esophageal cancer in China is mainly based on Western clinical guidelines, but our conclusions differed from those of Western clinical studies. One possible reason for this discrepancy is that the main pathological type of esophageal carcinoma in China is esophageal squamous cell carcinoma, whereas it is esophageal adenocarcinoma in Western countries. This implies differences in histological characteristics, biological behavior, tumor position, sensitivity to chemotherapy drugs, and so on.

Other centers have also examined the suitable treatment for patients with locally advanced ESCC. The results of the study by Lyu et al. (20) suggested that paclitaxel- and cisplatin-based adjuvant chemotherapy was associated with a significantly increased OS as compared with surgery alone in lymph node-positive ESCC patients. In addition, the postoperative adjuvant chemotherapy and postoperative adjuvant chemoradiotherapy groups exhibited a substantially lower risk of recurrence or death than did the non-adjuvant group. The study also showed that if patients could tolerate both adjuvant chemotherapy and CRT, they could be spared from later high-dose irradiation for locoregional recurrence without causing an increase in the long-term postoperative complications. Chen et al. (21) showed that the effects of postoperative adjuvant CRT in patients with ESCC are not clear. He analyzed the reasons for the shortage of large case-control and prospective clinical studies; the absence of statements concerning the indication for adjuvant therapy in the guidelines and the consequent variability in application and assessment; and the deficit in esophageal cancer research regarding the mechanisms of metastasis compared to the research in other solid tumors, such as breast and lung cancer.

Some limitations to our study should also be addressed. The sample size in our study was not large. Furthermore, the cause of death was not determined in our study because we lacked the relevant data.

Reporting Checklist: The authors have completed the Tripod reporting checklist. Available at http://dx.doi.org/10.21037/atm-20-4893

Conflicts of Interest: All authors have completed the ICMJE uniform disclosure form (available at http://dx.doi.org/10.21037/atm-20-4893). The authors have no conflicts of interest to declare.

Ethical Statement: The authors are accountable for all aspects of the work in ensuring that questions related to the accuracy or integrity of any part of the work are appropriately investigated and resolved. This single-institution, retrospective study was approved by the institutional review board of Fujian Medical University Union Hospital (No. 2015KY021) and informed consent was taken from all the patients. The study was conducted in accordance with the Declaration of Helsinki (as revised in 2013).