Cancer is a life-threatening, significant health burden that is rapidly emerging as the foremost cause of death in the 21st century. Although several molecular targeting drugs are widely used, chemotherapy continues to remain the most effective form of tumor treatment. Doxorubicin, a representative anthracycline, is a prominent chemotherapy drug found to be effective in the treatment of several cancers, including hematological malignancies, soft tissue sarcomas, and solid tumors. However, the long-term use of this potent antineoplastic agent is limited by its severe side effects, with cardiotoxicity identified as a particularly common side effect (1). While reducing the dose or dexrazoxane administration can relieve doxorubicin-induced cardiotoxicity (2), the dosage of dexrazoxane is strictly controlled. Therefore, identifying new strategies to improve doxorubicin-induced cardiotoxicity is critical.

Doxorubicin has been proposed to induce cardiotoxicity via redox cycling and reactive oxygen species (ROS) generation, which leads to the destruction of myocardial mitochondria, production of substantial ROS levels and cell death by apoptosis or necrosis (3). Doxorubicin can also cause cardiac conduction disorder, leading to arrhythmia. In doxorubicin-treated beagle dogs and rats, doxorubicin-induced acute cardiotoxicity manifested as abnormal conduction, including bradycardia, ST-segment elevation, prolongation of QT intervals, and QRS widening (4). However, the underlying mechanism of how doxorubicin affects cardiac conduction is not precise.

The two branches of arrhythmia, including abnormalities in cardiac pacing and conduction, may co-exist in doxorubicin-induced heart disease. Connexins 43 (Cx43) are integral membrane proteins that form gap junctions to enable the direct cytoplasmic exchange of information and substances between adjacent cells and contribute to cardiac conduction. Notably, the propagation of cardiac action potentials and the maintenance of a regular beating rhythm are mediated by the gap junctions (5). There is evidence that suggests that gap junctions regulate electrical coupling and are vital for normal impulse propagation through the heart. Additionally, the reduction of gap junctions (Cx43) leads to reduced intercellular coupling, thereby lowering conduction velocity (6). Studies have shown that chemotherapy may cause down-regulation of Cx43 total protein and upregulation of its phosphorylated form, p-Cx43 (7). However, the extensive knowledge in this field, the prevention of chemotherapy-induced upregulation of p-Cx43 and the resulting conduction abnormalities has not been established.

Since doxorubicin-induced cardiotoxicity is associated with both ROS-induced myocardial injury and inflammation-induced conduction disorder (8), the identification of a safe and stable compound that can ameliorate both adverse effects of doxorubicin were critical. After extensive screening, uric acid was selected, which is a compound with strong antioxidant capacity. Uric acid is an important, naturally occurring, physiological antioxidant, iron stinger mixture, and free radical scavenger (9). Despite previous reports of the neuroprotective effects displayed by uric acid, the underlying mechanism remains unclear (10). Also, we observed that plasma levels of uric acid often increased in patients after chemotherapy. Although previously considered to be associated with chemotherapy-induced kidney damage, this phenomenon has rarely been linked with other adverse events.

Furthermore, the level of uric acid in the body was shown to increase during cellular stress (11). While our previous research has focused on AMPK, the cellular energy stress molecule, involved in inflammatory and repair processes (12). Evidence has also indicated that doxorubicin-induced cardiotoxicity is closely related to AMPK (13-16). This study explored the protective effect of elevated uric acid on doxorubicin-induced cardiotoxicity. Furthermore, we investigated if this protective effect was mediated through AMPK signaling.

We present the following article in accordance with the ARRIVE reporting checklist (available at http://dx.doi.org/10.21037/atm-20-3105).

Male ICR mice (18–22 g) at 8 weeks of age were provided by the Experimental Animal Center at Nanjing Medical University, Nanjing, China. The mice had free access to food and water and were housed in groups of five to six per cage under pathogen-free conditions with soft bedding under controlled temperature (22±2 °C) and a 12-hour light/dark cycle (lights on at 8:00 am). All rodent experiments were approved by the Animal Research Committee of Nanjing Medical University and maintained following the guidelines of the China Council on Animal Management (Animal ethical code authorization number: IACUC1707012).

Sixty mice were randomly divided into six groups (n=10 in each group): control; doxorubicin; doxorubicin + uric acid (62.5, 125, and 250 mg/kg); doxorubicin + allopurinol. Doxorubicin was dissolved in sterile saline (0.9% NaCl); uric acid and allopurinol were suspended in 0.5% CMC-Na solution, and before given it to mice, it would be resuspended by slightly concussion. Acute cardiotoxicity was induced by a single dose of doxorubicin (20 mg/kg) via intraperitoneal (i.p.) injection in mice. Various concentrations of uric acid (62.5, 125, and 250 mg/kg) and allopurinol (40 mg/kg) were intragastrically (i.g.) administered one day before doxorubicin treatment, and then continuously administered for 8 days every 24 h. To prevent uric acid from being metabolized by uricase in the body, the mice were injected with Oteracil potassium (an inhibitor of uricase) 5 min before uric acid treatment. The control and doxorubicin groups were i.g. administered with 0.5% carboxymethylcellulose (CMC-Na) solution. The mortality rate and body weight of the mice were recorded every day.

Serum and tissue samples were extracted from each mouse and stored at −80 °C for further analysis. The following cardiac injury markers were identified using commercial kits (R&D Systems, USA) and detected according to the manufacturer’s instructions: creatine kinase MB (CK-MB); lactate dehydrogenase (LDH) and Aspartate aminotransferase (AST). Concentrations were calculated by referring to a standard curve, according to the manufacturer’s instructions.

Essentially, mice were anesthetized with chloral hydrate (400 mg/kg, i.p.) before undergoing ECG for heart rate and QT interval analysis. Electrodes were placed under the skin right hind limb, right front limb, and left hind limb. The results were recorded using the MP150 ECG module (BIOPAC, USA). The duration of each recording was at least 5 min at 50 mm/s with a voltage of 1 mV/cm.

Doxorubicin-induced cardiotoxicity was determined using the xCELLigence platform (real-time cell analyzer, RTCA). Briefly, duplicate wells of E-plate 16 were seeded with H9C2 cells at 104/well and cultured for 24 hours in complete culture medium containing FBS. The xCELLigence RTCA system was used to monitor cellular kinetics across microelectronic sensors integrated into the bottom of the plate. 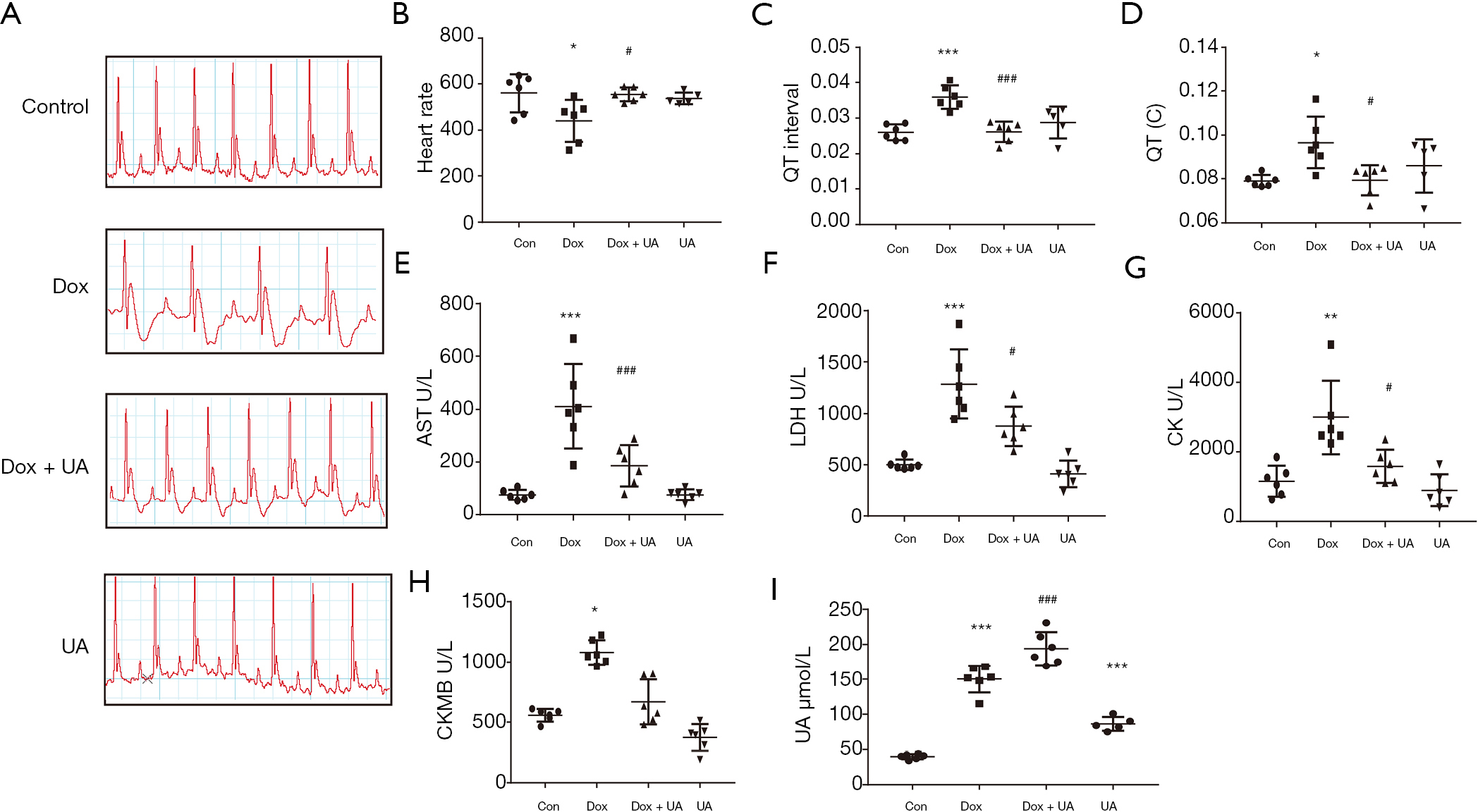 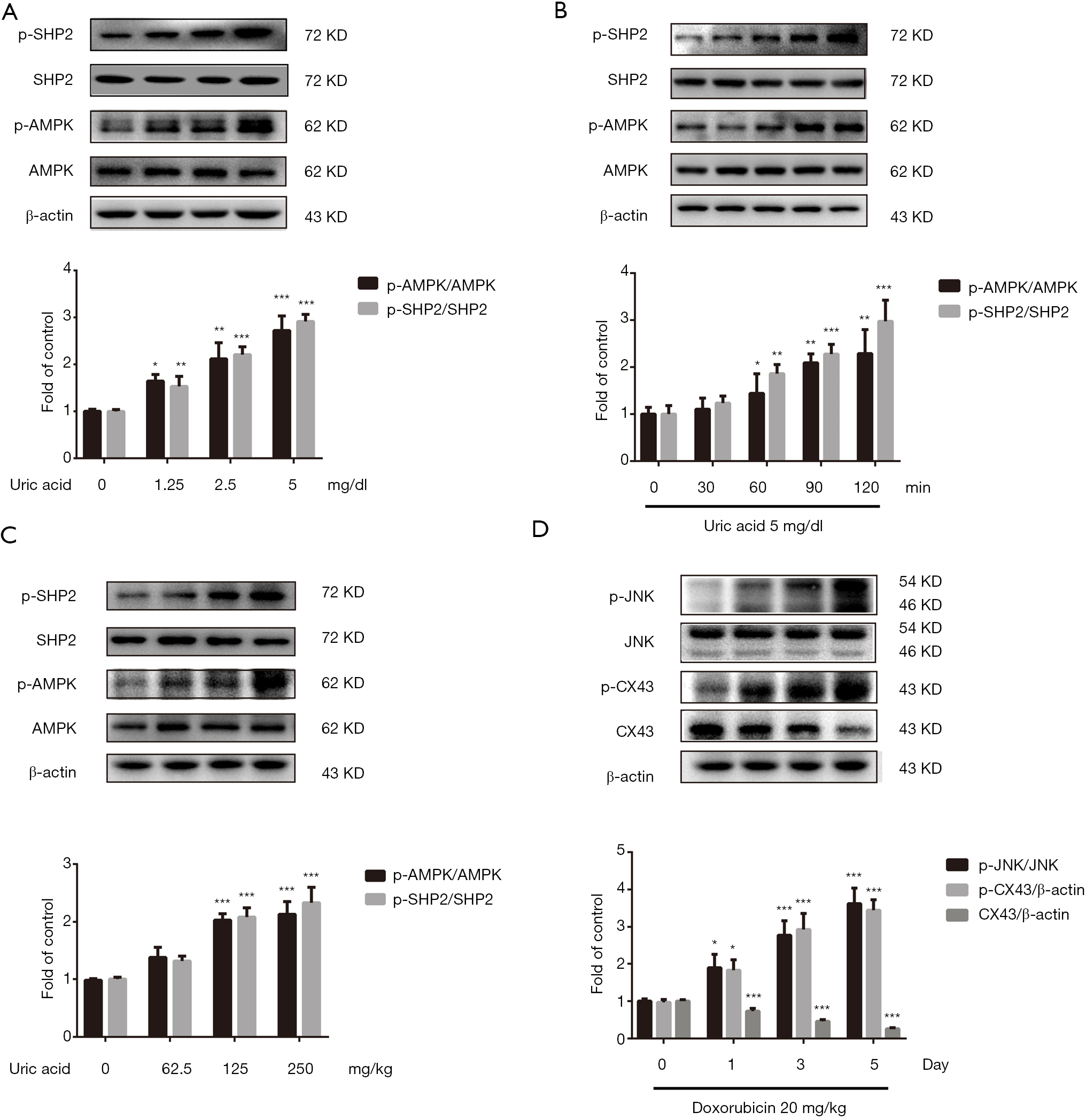 Figure 3 Uric acid preconditioning significantly induced activation of AMPK and SHP2 both in vivo and in vitro. (A) Uric acid treatment for 2 h significantly increased the levels of p-AMPK/AMPK and p-SHP2/SHP2 in H9C2 cells in vitro. (B) Uric acid treatment (5 mg/dL) time-dependently increased he levels of p-AMPK/AMPK and p-SHP2/SHP2 in H9C2 cells in vitro. (C) Consecutive administration of uric acid (125 and 250 mg/kg, i.g.) for 2 days significantly up-regulated the level of p-AMPK/AMPK and p-SHP2/SHP2 in heart tissue in vivo. (D) Intraperitoneal injection of a single dose of doxorubicin (20 mg/kg) markedly elevated the expression levels of p-JNK/JNK and p-Cx43 but reduced the total Cx43 level on day 5 in vivo. Data are presented as the mean ± SEM of three individual experiments. Significant difference by one-way or two-way analysis of variance (*, P<0.05, **, P<0.01, and ***, P<0.001 vs. control group; Bonferroni post hoc tests). 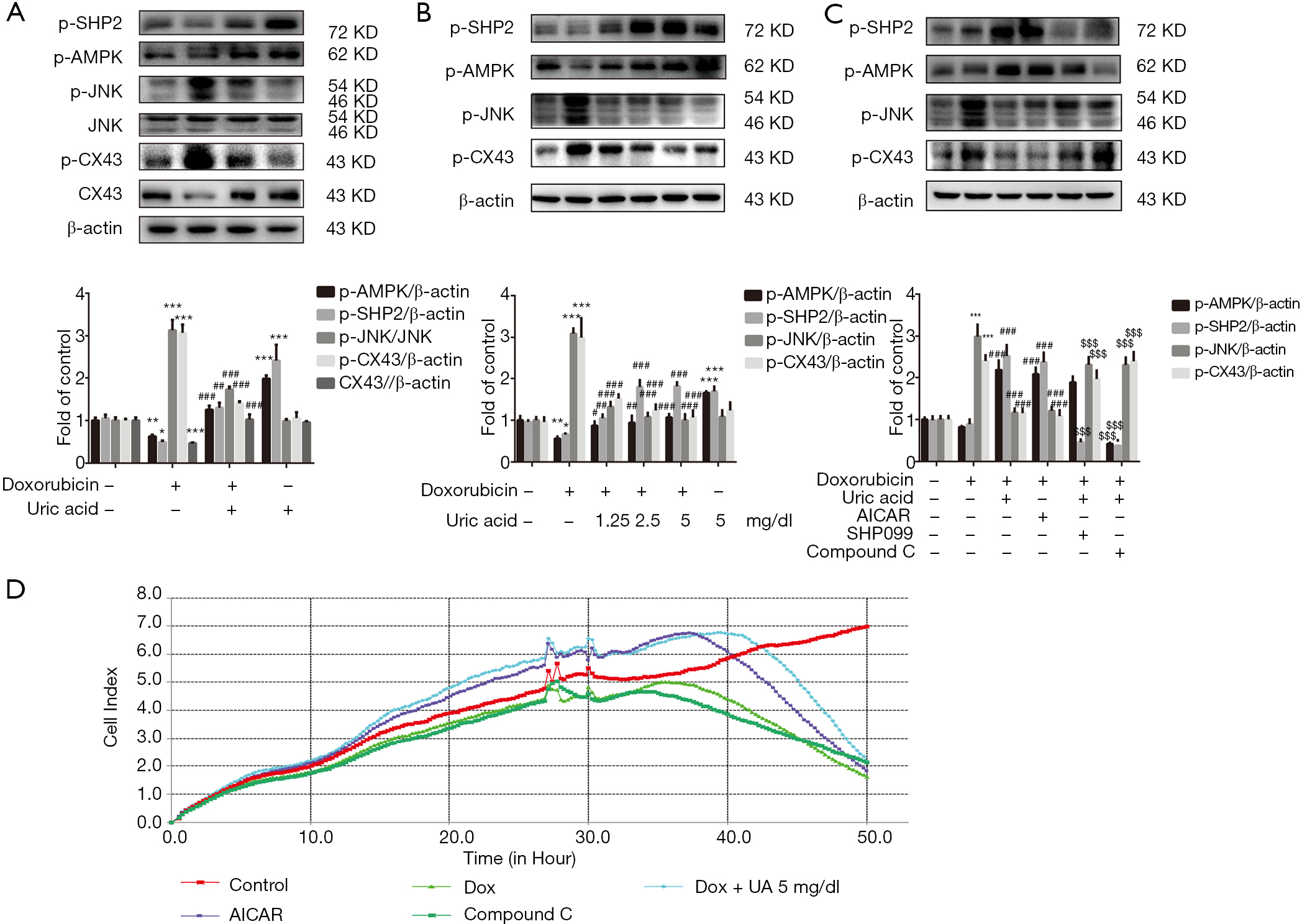 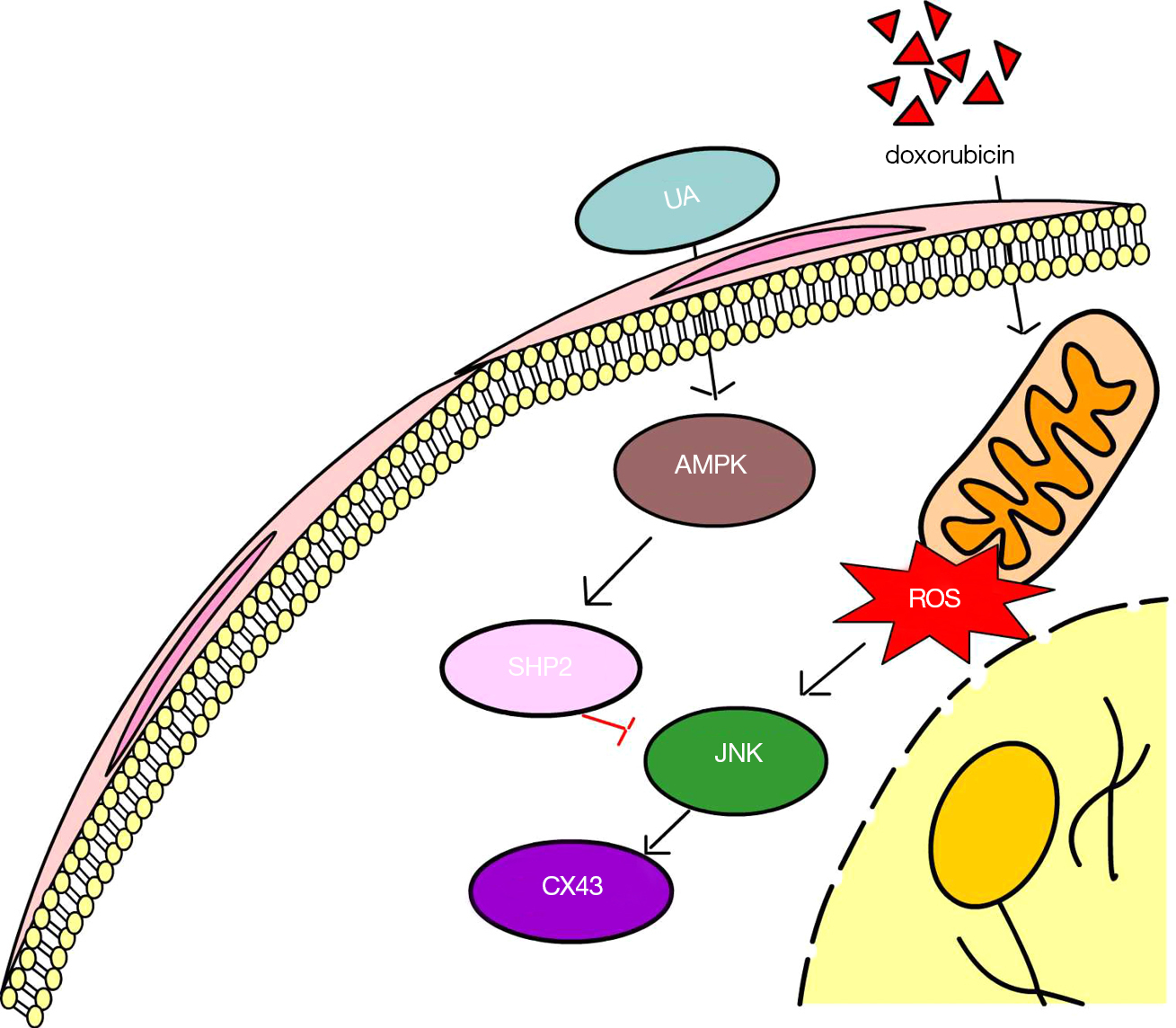 Uric acid is a product of the catabolism of purine nucleotides, and previous studies have shown that excessively high levels of uric acid increase the risk of heart disease and gout (18-20). Evidence also indicated that uric acid has a powerful antioxidant effect (21,22). Yasutake et al. found that uric acid ameliorates indomethacin-induced enteropathy in mice through its antioxidant activity (23). Additionally, systemic administration of uric acid over a range of doses is safe and can increase the body's antioxidant capacity (24). Studies have also demonstrated that febuxostat, a drug which lowers uric acid, which can increase the incidence of cardiovascular disease in patients, suggesting that lowering of uric acid is not always beneficial (25). However, persistent hyperuricemia may induce the apoptosis of cardiomyocytes by activating calpain-1 and endoplasmic reticulum stress (26), and repeated administration of uric acid may be unfavorable in patients with joint and renal disease, it is also difficult to determine the absolute serum concentration beyond which the risk is significantly increased. Additionally, in patients with arthritis and tumor lysis syndrome, even uric acid concentrations beyond 1,200 µM do not necessarily cause gout (27). Moreover, renal impairment in the presence of chronic hyperuricemia is more often attributable to other factors, such as hypertension or diabetes, rather than the serum uric acid concentration itself. Thus, increased uric acid levels do not always have negative effects. In this study, we found that the uric acid-lowering medicine allopurinol increased the mortality rate of doxorubicin-treatment mice. In addition, uric acid preconditioning significantly increased the survival rate and body weight of mice and reduced the levels of AST, CK, and LDH relative to doxorubicin-treated mice. Additionally, studies have shown that uric acid does not cause tumor drug resistance to doxorubicin (28). Based on these results, increased endogenous uric acid levels may have a certain protective effect on the heart.

Moreover, JNK reportedly plays an essential role in the regulation of Cx43 and p-CX43. JNK activation led to a loss of total Cx43 protein and increased p-CX43 levels, which significantly reduced conduction velocity (31). Furthermore, it also can reduce Cx43-mediated cell-to-cell communication (32). Additionally, knockdown of the carboxyl terminal domain of Cx43 lead to an increase in the infarct size and increased susceptibility to arrhythmias following acute coronary occlusion in a previous study (33). Consistent with previous studies, we found that doxorubicin could significantly upregulated p-JNK and p-Cx43 in vitro and in vivo and induced abnormal conduction in the heart, such as bradycardia, QT prolongation, and arrhythmia, whereas preconditioning with uric acid effectively reversed these effects.

Next, we further investigated how uric acid modulated the JNK-Cx43 signaling pathway to alleviate doxorubicin-induced cardiotoxicity. Recent studies have shown that metformin can resist doxorubicin-induced cardiomyocyte injury by activating AMPK (13,14). Doxorubicin has been demonstrated to reduce AMPK activity in rat heart tissue (15,34). These observations ultimately led us to reasonably believe that doxorubicin-induced cardiotoxicity might be AMPK-related. Additionally, previous studies postulated the existence of a particular relationship between AMPK and SHP2 (35). However, these findings were not conclusive. Additionally, some researchers revealed that an SHP-2 deletion in post-migratory neural crest cells results in impaired cardiac sympathetic innervation (36). Another study showed that the deletion of Ptpn11 (SHP2) in cardiomyocytes causes dilated cardiomyopathy, thus indicating the protective role of SHP2 in adult cardiac function (37). In this study, uric acid induced significant upregulation of p-AMPK and p-SHP2 but inhibited abnormal phosphorylation of JNK and Cx43 mediated by doxorubicin in vitro and in vivo. Moreover, preconditioning with AICAR mimicked the protective effect of uric acid on cardiomyocytes in vitro, whereas preconditioning with compound C reversed these effects and abolished the protective effect of uric acid on cardiomyocytes. Although there is some controversy regarding the effect of uric acid on AMPK (15,38,39), we found that uric acid preconditioning activated AMPK-SHP2 signaling and alleviated doxorubicin-induced alterations in the JNK-Cx43 gap junction and abnormal conduction.

Based on our results, increased of endogenous uric acid levels may help to protect against doxorubicin-induced cardiotoxicity by activating the AMPK-SHP2 signaling pathway. However, how uric acid activates AMPK-induced SHP2 activation, whether uric acid has a cardioprotective effect in other animals such as rats and beagles, and the potential value of this novel therapeutic strategy in the clinic require further analyses.

Reporting Checklist: The authors have completed the ARRIVE reporting checklist. Available at http://dx.doi.org/10.21037/atm-20-3105

Conflicts of Interest: All authors have completed the ICMJE uniform disclosure form (available at http://dx.doi.org/10.21037/atm-20-3105). The authors have no conflicts of interest to declare.

Ethical Statement: The authors are accountable for all aspects of the work in ensuring that questions related to the accuracy or integrity of any part of the work are appropriately investigated and resolved. All rodent experiments were approved by the Animal Research Committee of Nanjing Medical University and maintained following the guidelines of the China Council on Animal Management. Animal ethical code authorization number: (IACUC1707012).