Cervical esophageal cancer (CEC) is a relatively uncommon malignancy, accounting for approximately 5% of all esophageal cancers (1). Squamous cell carcinoma (SCC) is a major histologic type of CEC, accounting for approximately 95% of CEC cases. The 5-year overall survival (OS) of patients with CEC is lower than that of patients with other SCCs of the head and neck region (2), and is more comparable to the 5-year OS of patients with SCC located in other regions of the esophagus, which is approximately 26% (3). However, CEC differs from cancers of the thoracic esophagus in other aspects, such as genetic alterations, prognostic factors, and cancer management (4,5). Therefore, CEC is a unique disease that has specific characteristics.

Nomograms have been widely used for predicting prognoses in a diverse range of cancers with success. Compared to the American Joint Committee on Cancer (AJCC) Tumor-Node-Metastasis (TNM) staging system, nomograms quantify risk by incorporating all clinicopathological variables, allowing for individualized prognostic predictions for various types of cancer (6-11). However, to the best of our knowledge, no specific nomogram has yet been developed for CEC. The present study is the first to develop a prognostic nomogram for CEC based on a large cohort of patients from the Surveillance, Epidemiology, and End Results (SEER) database. The present study was performed in accordance with the STROBE reporting checklist (available at http://dx.doi.org/10.21037/atm-20-2505).

For the development of the nomogram, we randomly assigned half of the patients into a training cohort (n=300) and the other half into a validation cohort (n=301). A nomogram was created based on the results of the multivariable analysis. Predictive performance was assessed based on the C-index and external calibration plots with samples in the validation cohort. We compared the nomogram with the TNM stage system using the rcorr.cens function in the R package Hmisc. All statistical analyses were performed using IBM SPSS software (version 23.0; IBM, Armonk, NY, USA) and R software (version 3.1.1; http://www.r-project.org). This study was conducted in accordance with the Declaration of Helsinki (as revised in 2013).

The patient selection process is shown in Figure 1. A total of 601 patients were included in the present study. The demographic and clinicopathological characteristics of the study cohort are provided in Table 1. The median age at diagnosis was 68 years, and 59.4% of the patients were male. SCC was the predominant histological type; 567 (94.3%) patients were diagnosed with SCC, whereas 34 (5.7%) patients had adenocarcinoma (AC). Of the 498 patients with documented tumor size, the median size was 40 mm. The majority of patients presented with locally advanced primary cancer, with 62.1% having a primary tumor classification of T3 or T4. Most of the patients (58.6%) had no nodal involvement. 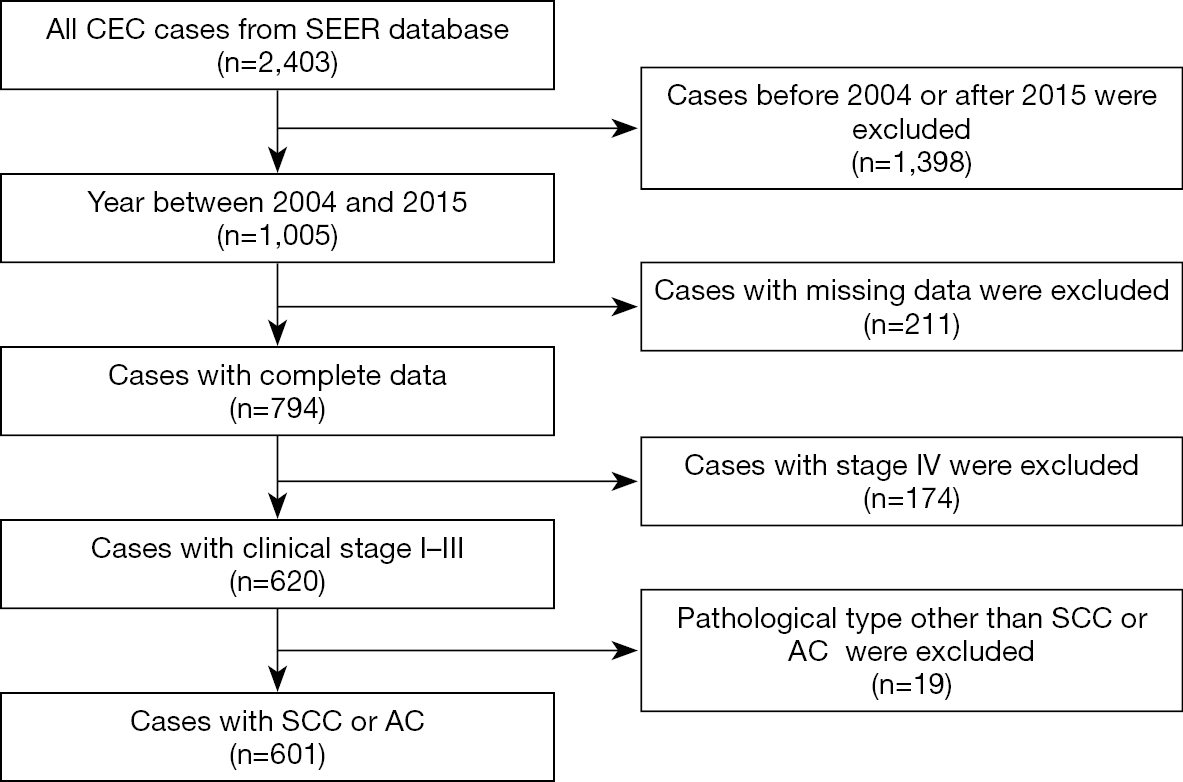 Figure 1 Flow diagram of the patient selection process for the study.

A total of 83 patients (13.8%) underwent surgery, and 453 patients (75.4%) were treated with radiotherapy (RT). Patients were evaluated to determine whether treatment decisions were related to demographic or clinicopathological factors. We found that patients were more likely to undergo surgery if they were diagnosed before 2009, had AC, had relatively small primary tumors, presented with early-stage disease, or had no nodal involvement (Table 2). We observed a statistically significant decrease in the incidence of surgery between 2004 and 2015, from 16.7% in 2004 to 8% in 2015 (P=0.035) (Figure 2). 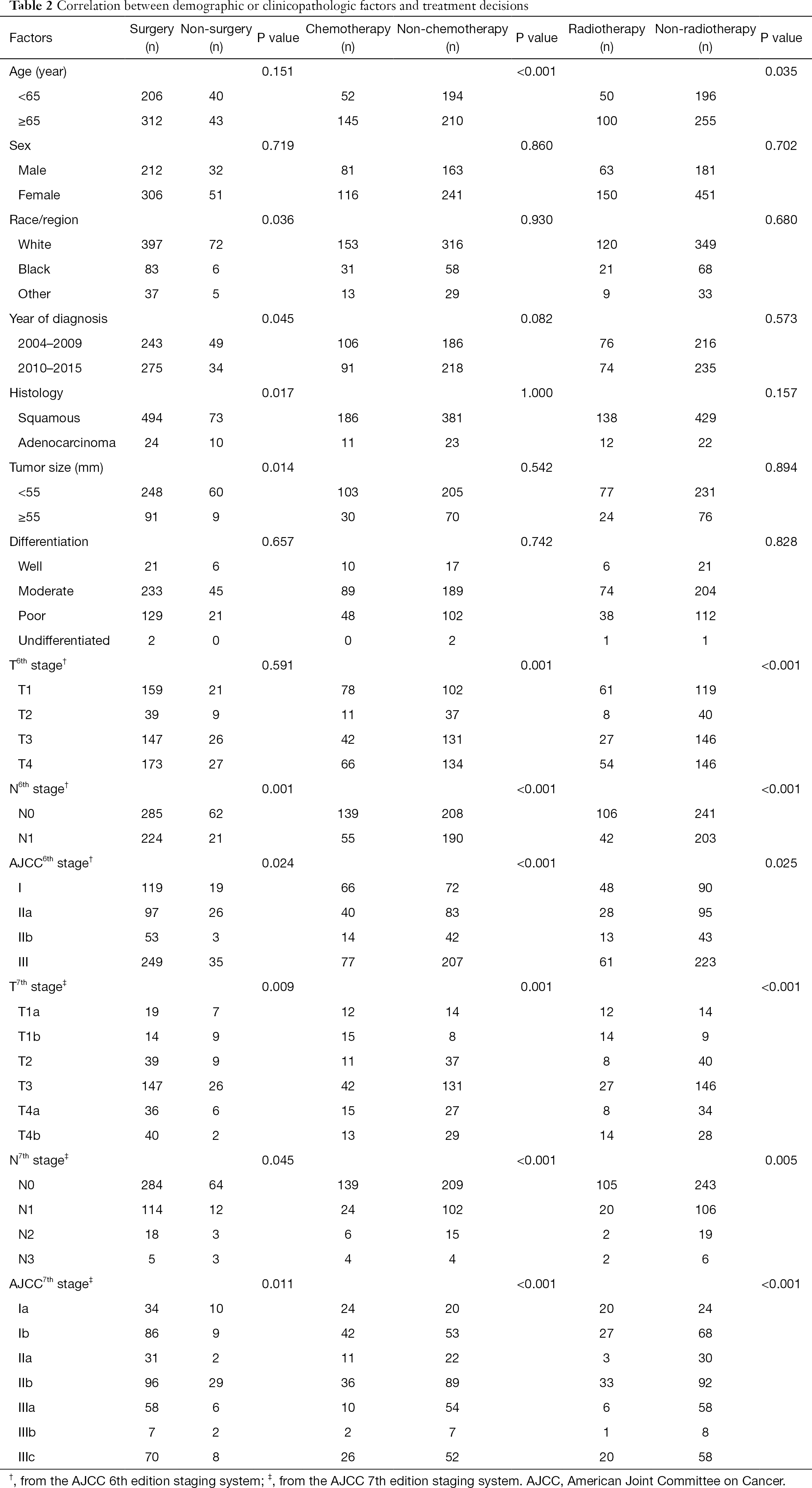 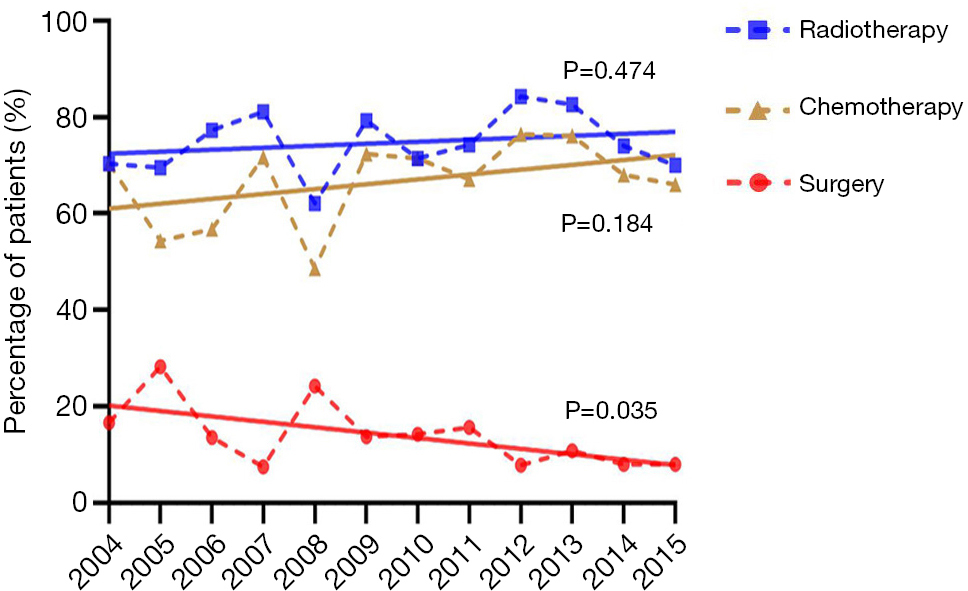 Figure 2 Rates of use of surgery, radiotherapy, and chemotherapy between the years 2004 and 2015 in non-metastatic CEC. P values represent the comparison of the linear regression line and a line with slope equal to 0 for each treatment modality.

The median follow-up time was 71 months. The median OS and DSS for the overall population were 15 and 18 months, respectively. Most of the patients (64.4%) underwent comprehensive treatment consisting of surgery, RT, or chemotherapy. There was a significant improvement in OS and DSS among patients who underwent comprehensive treatment (Figure 3A,B). In a subgroup of patients with SCC, trimodal therapy consisting of surgery and chemoradiotherapy showed the best DSS, although there was no improvement in OS over dual therapy (Figure 3C,D). Patients who underwent surgery usually had earlier-stage disease and smaller tumor size (Table 3); however, there was no significant difference in OS or DSS between those who underwent surgery only and those who underwent surgery and chemoradiotherapy (Figure 3E,F). 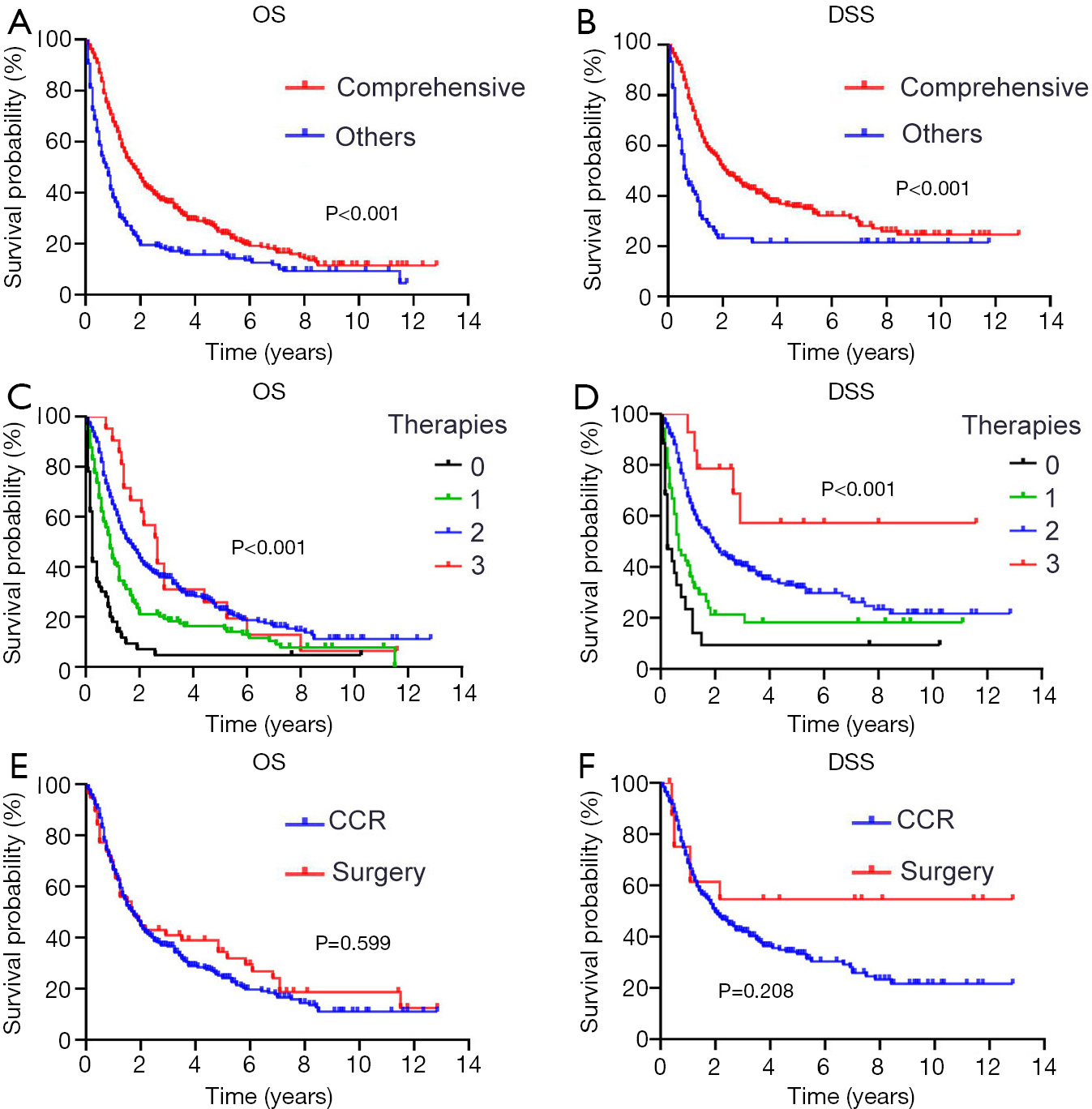 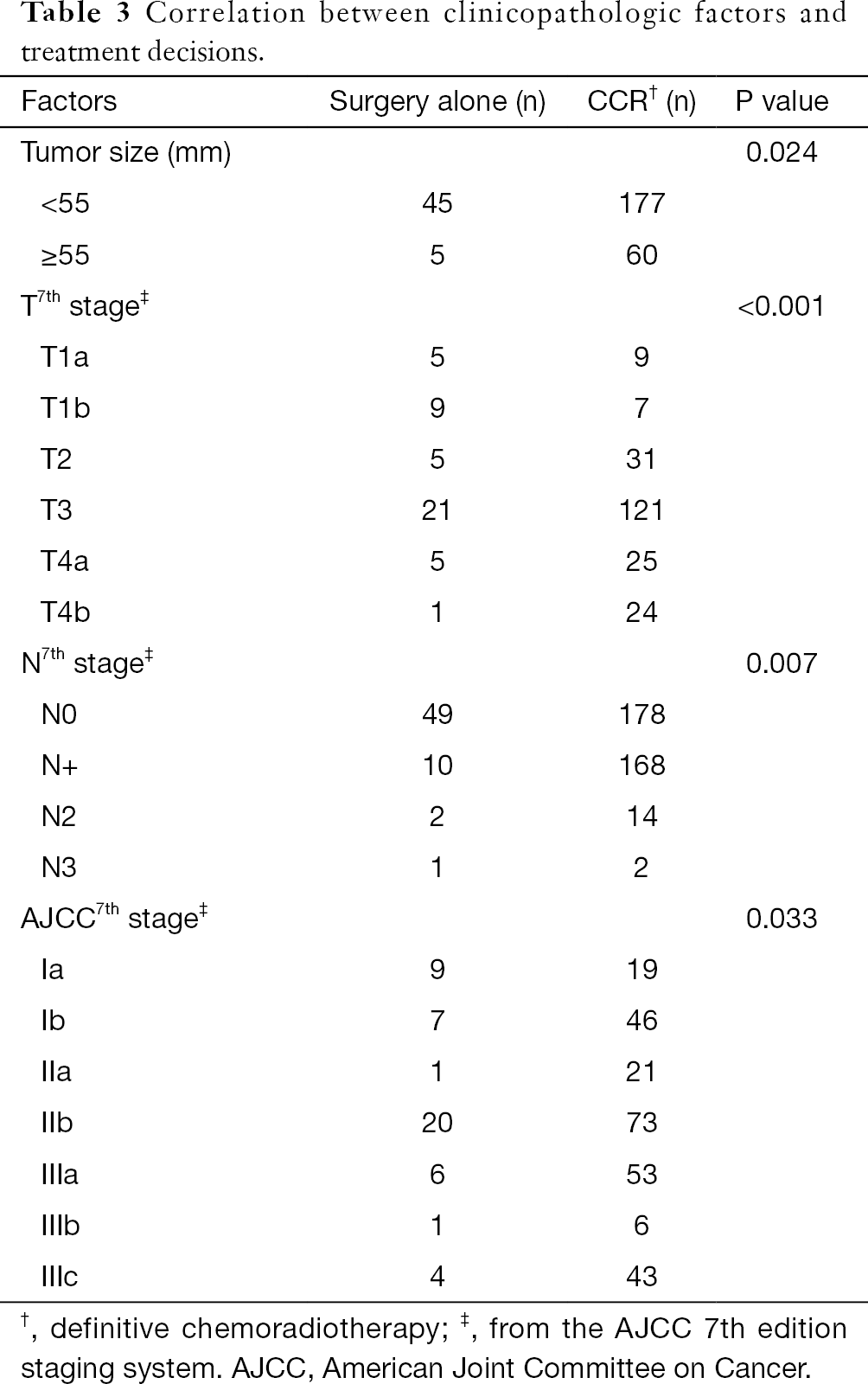 Prognostic factors for OS and DSS in the overall cohort 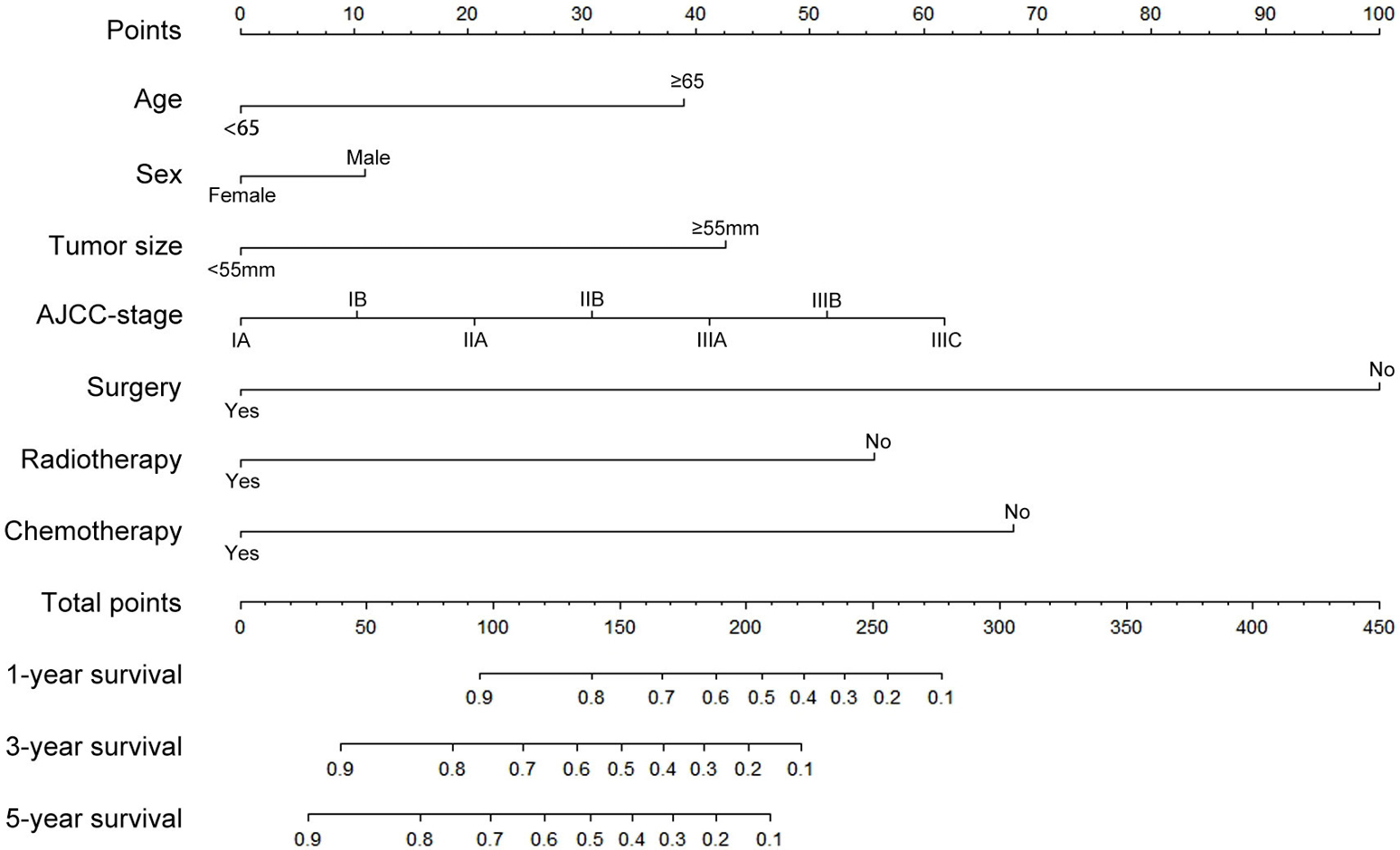 Figure 4 Nomogram for predicting 1-, 3-, and 5-year OS for non-metastatic CEC. To calculate the survival rate of each individual patient, points for each of the factors were first identified on the uppermost point scale, and then the total points from all factors were added up and projected on the bottom point scale to indicate the probability survival. 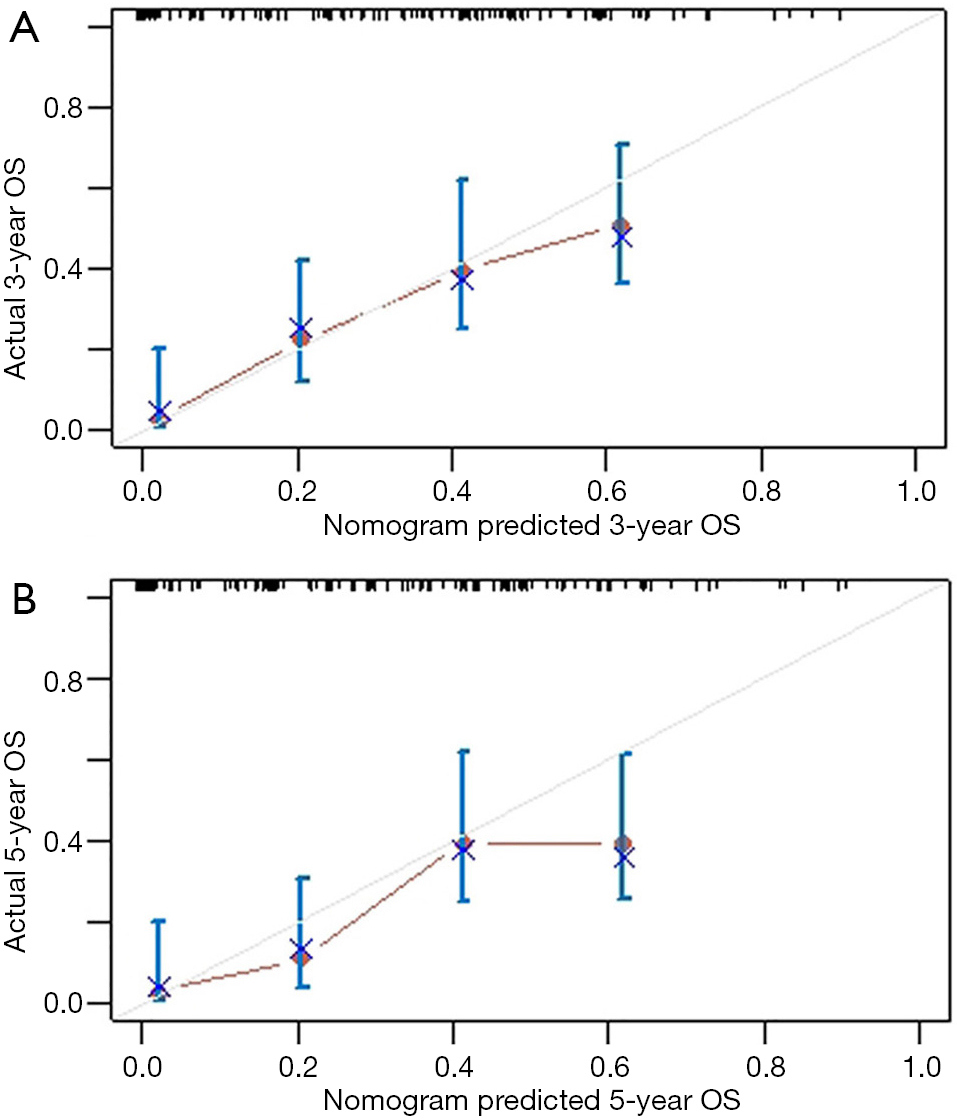 In the present study, we collected data from the SEER database to evaluate prognostic factors for non-metastatic CEC, and then used these risk factors to construct a nomogram to predict the OS of patients with CEC. We included age, sex, tumor size, TNM staging, and treatment modalities when creating the nomogram. The nomogram had a relatively high accuracy which was supported by the C-index (0.743 for the training cohort and 0.706 for the validation cohort, respectively) and calibration plots.

The demographic and clinicopathological characteristics of this cohort resemble those of a previous study, which was also based on the SEER database (12). The median age of the whole group at diagnosis was 68 years, and the proportion of males to females was about 6:4. We set 65 years as the cutoff age because it presented the most significant difference in OS. Most of the cases were moderately differentiated, followed by cases with poor differentiation, whereas only 2 cases were documented as undifferentiated. We found no difference in survival among those who had well-, moderately, or poorly differentiated tumors, although both patients with undifferentiated tumors survived for only 2 months. The majority of patients were stage III (47.3%) and stage II (stage IIA: 20.5%, stage IIB: 9.3%) at diagnosis, which was consistent with reports from other studies (12-16).

SCC and AC represent two primary histological subtypes of thoracic esophageal cancer that are significantly different in clinicopathology and prognosis (17,18). In our cohort of patients with CEC, SCC was the predominant histological type, whereas AC accounted for only 5.7% of patients; these findings are consistent with previously reported data (2). The median OS and DSS for patients with AC were 44 and 84 months, respectively, compared to 15 and 17 months for those with SCC. The 5-year OS for patients with SCC and AC of the cervical esophagus were 19.8% and 46.1%, respectively (data not shown). These results confirmed that patients with AC had a better prognosis compared to those with SCC.

The tumor size of CEC may play a critical role in determining survival; however, the optimal cutoff value has not been established. Performance status and tumor length (≤6 or >6 cm) have previously been described as factors that are significantly related to survival (14). Other cutoff values of tumor length, such as 3 cm or 3.5 cm, have also been reported (19-21). In the present study, a total of 498 patients (82.9%) had documented tumor size. Using Cox regression analysis, we identified tumor size as an independent risk factor for survival. By using X-tile plot software, we set 5.5 cm as the cutoff value, which is close to previously reported values (14). In contrast to breast cancer, tumor size is not currently included in the TNM staging system for esophageal cancer (22,23). Based on our findings, we propose that it be considered for inclusion in future editions.

Historically, surgery has been the preferred treatment for CEC. However, we identified a decreased trend in the implementation of surgery; this may be due to the high risk of major complications and the high rates of morbidity and mortality associated with surgical treatment, although data pertaining to this is not available from the SEER database. In our cohort, 13.8% of patients underwent surgical resection. These patients had significantly longer survival compared to those who did not, which could be attributed to an earlier stage at diagnosis and smaller primary tumors.

Chemoradiotherapy has become the current mainstay for the treatment of CEC. We found that there was no significant difference in prognosis between those who underwent surgery and those who underwent radical chemoradiotherapy, although patients who underwent surgery were more likely to have AC, a smaller tumor size, less lymph node involvement, and lower TNM staging. These results underline the critical role of chemoradiotherapy in CEC, especially among patients who have a greater number of high-risk factors. However, it remains controversial whether OS improves with chemoradiotherapy followed by surgery versus chemoradiotherapy alone for patients with SCC of the esophagus (24-27). Our results showed that trimodal therapy significantly improved DSS when compared with double or single therapy in the SCC subgroup, although no significant difference in OS was found between the trimodal- and dual-therapy groups. This provides favorable evidence for the use of trimodal therapy for CEC patients with SCC.

Nomograms have advantages over the AJCC TNM staging system in predicting patient prognosis, and they have been applied in numerous types of cancers. To the best of our knowledge, no nomogram has been developed specifically for CEC. The present study represents the first effort to develop a prognostic nomogram for CEC, based on a large cohort of patients from the SEER database. The nomogram showed good discrimination in the external validation cohort. In addition, we compared the predictive accuracy of our nomogram with the 7th edition of AJCC TNM staging system, and showed that our nomogram outperformed the TNM staging system in the prognostic prediction of OS in CEC patients. These results suggest that our nomogram has a relatively good discrimination in identifying high-risk populations and predicting prognosis.

The present study has several limitations. First, the SEER database does not include information on treatment toxicities, comorbidities, and failure patterns; therefore, these parameters could not be analyzed in the present study. Second, detailed information about cancer management was not available. We were therefore unable to separate patients who did not undergo surgery, RT, or chemotherapy, or those who underwent these treatments, but were not documented. Information on surgical procedure, radiation dose, and chemotherapy regimens were also not available. Therefore, our nomogram did not include details about treatment. Finally, selection bias and confounding bias should be considered when interpreting the results from the present study based on the SEER database.

We developed a prognostic nomogram to produce an individualized survival prediction for non-metastatic CEC patients. The nomogram had a relatively high accuracy and can likely be used to help identify high-risk patient populations and supplement the current TNM staging system.

The authors would like to thank SEER for open access to the database, and AME Editing Service (http://editing.amegroups.cn/#editing) for language assistance during the preparation of this manuscript.

Reporting Checklist: The authors have completed the STROBE reporting checklist. Available at http://dx.doi.org/10.21037/atm-20-2505

Conflicts of Interest: All authors have completed the ICMJE uniform disclosure form (available at http://dx.doi.org/10.21037/atm-20-2505). WW serves as a current editorial board member for Annals of Translational Medicine (Radiation Medicine) from April 2020 to March 2022. The other authors have no conflicts of interest to declare.