Lung cancer is one of the leading causes of cancer-related death in the world (1). Currently, approximately 15% of new cases of patients with lung cancer have been diagnosed as small cell lung cancer (SCLC) (2). SCLC behaves the most aggressively and is characterized by the rapid growth and high metastatic risk. A large proportion (60%) of patients presents with extensive stage disease (ED-SCLC) (3,4). Platinum-based chemotherapy still constitutes as the standard first-line care (4–6 cycles of etoposide plus either cisplatin or carboplatin) for patients with SCLC, particularly for those with ED-SCLC. Despite the high response rate of 65%, most patients encounter with rapid progression and/or disease recurrence. The outcomes still remain very poor, with the median overall survival (OS) being shorter than 20 months in limited stage disease (LD-SCLC) and only 12 months in ED-SCLC (5). Multiple clinical trials evaluating new chemotherapy agents or other treatment strategies have failed to improve the outcome significantly (6-9). Thus, further advances in the treatment of SCLC may rely on the development of novel classes of drugs to overcome the resistance of platinum-based drugs and/or of the newer targeted drugs targeting the related signal pathways.

Myeloid cell leukemia-1 (Mcl-1) is a unique member of anti-apoptosis B-cell lymphoma-2 (Bcl-2) family, with the functions in cell growth, tumorigenesis, and development of lymphocyte metastasis (10-13). Overexpression of Mcl-1 has been found in many types of human tumors, including breast cancer (14), melanoma (15), ovarian cancer (16), and non-small cell lung cancer (NSCLC) (17). Additionally, many lines of evidence have demonstrated that overexpression of Mcl-1 frequently induces the resistance to a number of the widely used anti-tumor drugs, including paclitaxel, gemcitabine, and especially, cisplatin (18-20). Inhibition of tumor growth and the increased cell apoptosis were observed in Mcl-1-overexpressing ovarian, lymphoma, colon cells, when Mcl-1 was knocked down. Furthermore, Yu et al. suggested that inhibition of Mcl-1 could enhance the cisplatin-induced apoptosis in esophageal squamous cell carcinoma cells (20), which was also verified in NSCLC cells (21). Depletion of Mcl-1 was reported to possibly enhance the sensitivity of NSCLC cells to cisplatin (22). Several studies reported that the overexpression of Mcl-1 was extremely and closely associated with inferior survival benefit of the patients with breast cancer (23,24). Similarly, the analogic prognostic value of Mcl-1 was observed in NSCLC (25). All together, these data indicate that Mcl-1 can be a promising target for anti-cancer therapy. However, its clinical features and the role as a prognostic factor of Mcl-1 in SCLC remain unclear and need to be clarified. Therefore, we performed this retrospective study to assess the impact of Mcl-1 expression on OS and to explore the association between expression level of Mcl-1 and the baseline clinicopathological characteristics and treatment response of the patients with SCLC, aiming to identify the potential patients with poorer prognosis and easier resistance to chemotherapy. Herein, we present the following article in accordance with the REMARK reporting checklist (available at http://dx.doi.org/10.21037/atm-20-2305).

In this retrospective study, we screened a total of 80 patients with histologically or cytologically confirmed SCLC at the Sun Yat-sen University Cancer Center (SYSUCC) (Guangzhou, Guangdong, China) during the period between March 2008 and December 2013. The inclusion criteria were set as follows: (I) the availability of tissue specimens for immunohistochemical staining, and (II) the availability of eligible clinicopathological information. The patients who had multiple primary cancers or previous malignancies within 5 years were excluded. The study was conformed to the provisions of the Declaration of Helsinki (as revised in 2013) and approved by the Institutional Review Board of SYSUCC (ID: B2019-140-01). The written informed consent was obtained from each participant.

The pieces of information about the baseline clinicopathological features, including gender, age, smoking status, performance status (PS), cancer stage, and therapeutic data were collected. The smokers were defined as those who had smoked more than 100 cigarettes. The cancer staging was determined based on the Veteran Affairs Lung Study Group (VALG) staging system and the seventh edition of the American Joint Committee on Cancer (AJCC). The first-line chemotherapy consisted of cisplatin and etoposide was administered for most patients on day 1 throughout each cycle. Furthermore, the patients with LD-SCLC even received concurrent chemoradiotherapy (CRT) or radical surgery.

All the enrolled patients were regularly followed up from pathological diagnosis to death. The last date of follow up was October 21, 2019. Tumor assessment was done every 2 cycles of chemotherapy and every 2 months after completion of treatment until the concurrence of disease progression, based on computerized tomography (CT) scanning. Tumor response to drugs was determined according to Response Evaluation Criteria in Solid Tumor 1.0 (26).

Continuous variables were changed into categorical variables based on their median values. Categorical variables were compared and evaluated with Chi-square or Fisher’ exact test. The primary endpoint was OS, defined as the period from time of pathological diagnosis to the date of death for any cause or last follow-up. For the analysis of OS, the patients who were alive at the time of last contact were censored. OS rates were compared between groups using the unstratified log-rank test, and hazard ratio (HR) and 95% confidence interval (95% CI) were provided. Subgroup analysis was performed to identify the consistency of the prognostic value according to the baseline clinicopathological characteristics. Cox-proportional hazard model was used to conduct multivariate analysis of association between Mcl-1 expression level and other prognostic factors, which were assessed with logistic regression. A two-sided P value ≤0.05 was considered statistically significant. All the statistical analyses were conducted via SPSS version 25.0 (IBM, Armonk, NY, USA).

A total of 80 SCLC patients with eligible tumor tissue samples and clinical information were included in this study (Figure 1). Median age of the enrolled patients at diagnosis was 59 years ranged from 22 to 78 years. Among them, 68 (85%) were male and 12 (15%) were female. A majority of them (n=64, 80%) were current or ever smokers who had a PS of 0–1 (n=79, 98.75%) and LD-SCLC (n=50, 62.5%). In term of treatment, all the patients received platinum-based chemotherapy as the first-line treatment, most of them (n=63, 90%) received cisplatin. Their baseline clinicopathological characteristics are shown in Table 1. 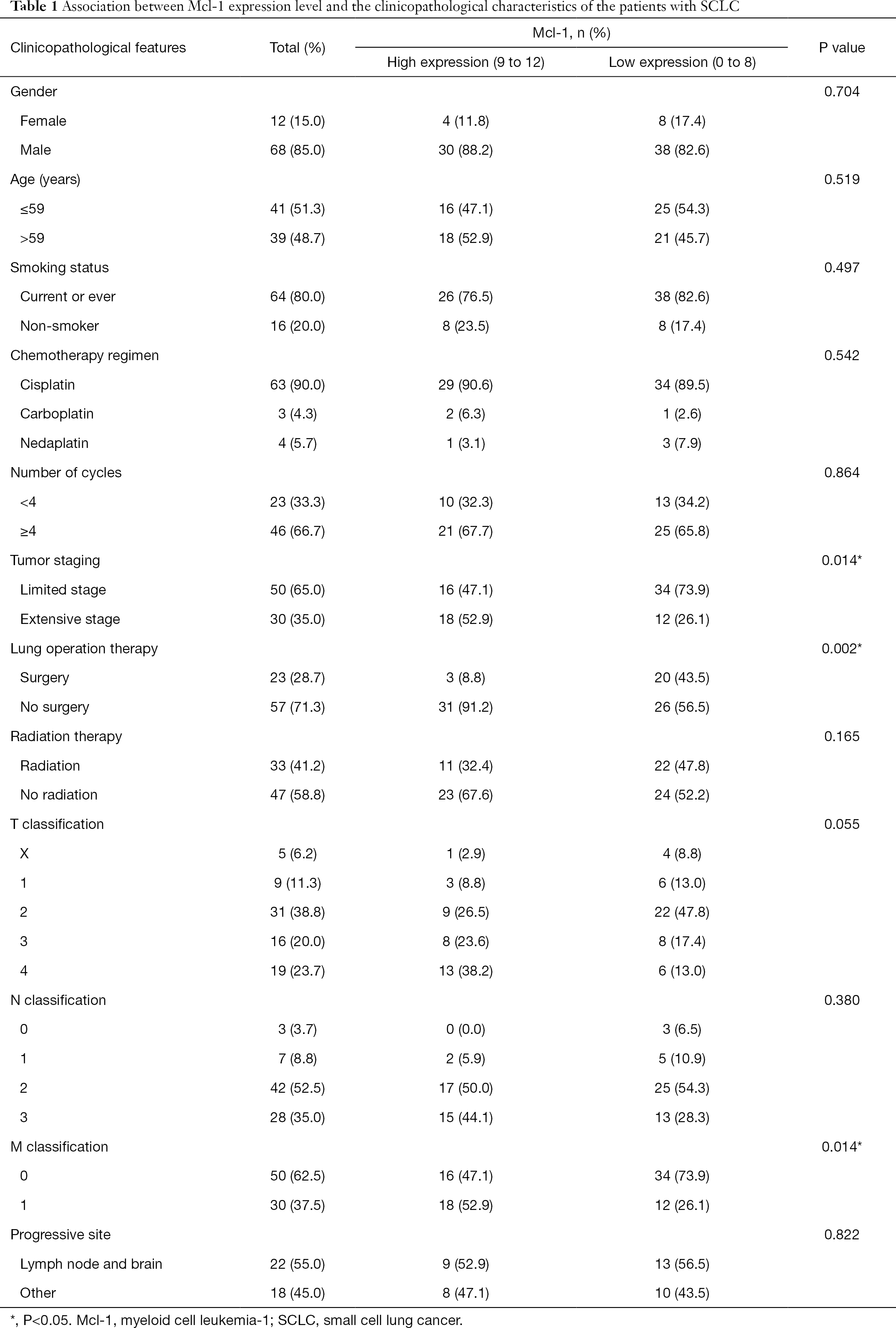 Association of Mcl-1 level with the clinicopathological characteristics 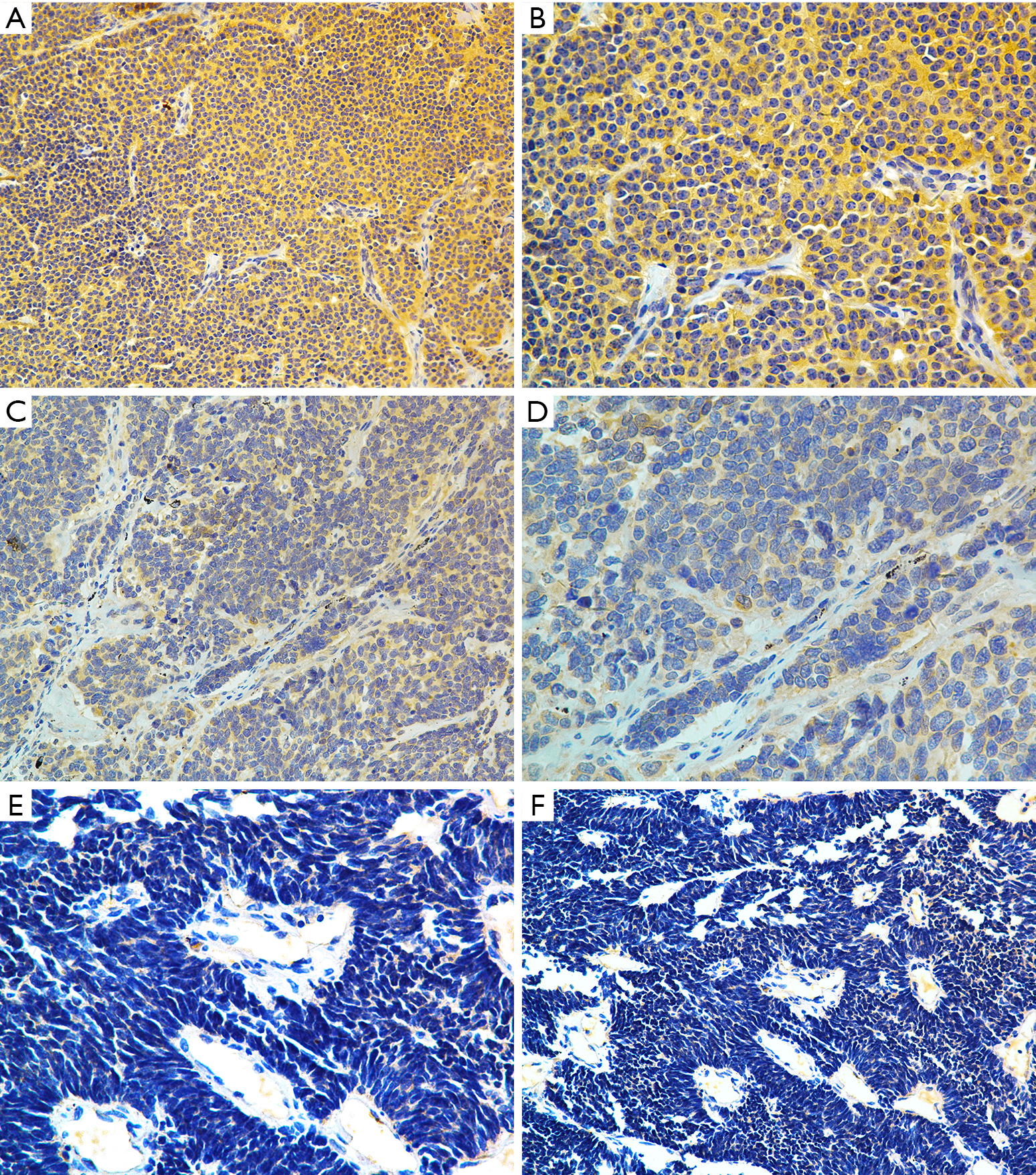 Association of Mcl-1 with time to progression (TTP) 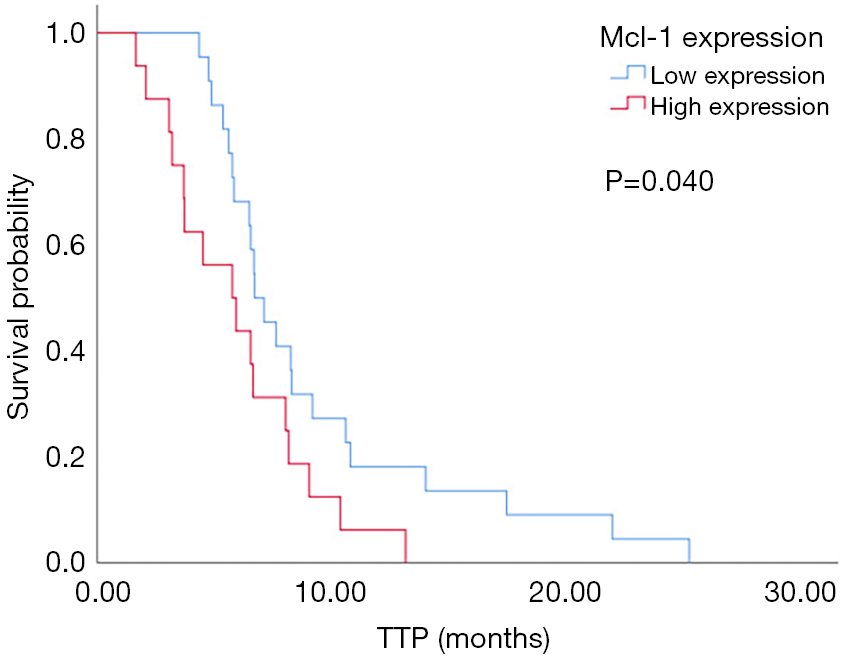 Association of Mcl-1 level with OS

The median follow-up for the entire population was 21.13 months ranged 0.30–121.49. At the time of analysis, all the patients with high Mcl-1 expression level were alive whereas only one patient with low Mcl-1 expression level was alive. Their median OS was 12.67 months ranged within 0.20–107.1. In the univariate analysis, OS was significantly more closely associated with the patients in low Mcl-1 group than with those in high Mcl-1 group (P=0.003, Table 2, Figure 4A). Moreover, the results showed significant OS benefit in the patients with limited stage disease (16.26 vs. 9.36, P<0.001, Table 2, Figure 4B). Nevertheless, no significant correlations between OS and age (P=0.360), between OS and gender (P=0.592) and between OS and smoking status (P=0.606) were observed (Table 2). 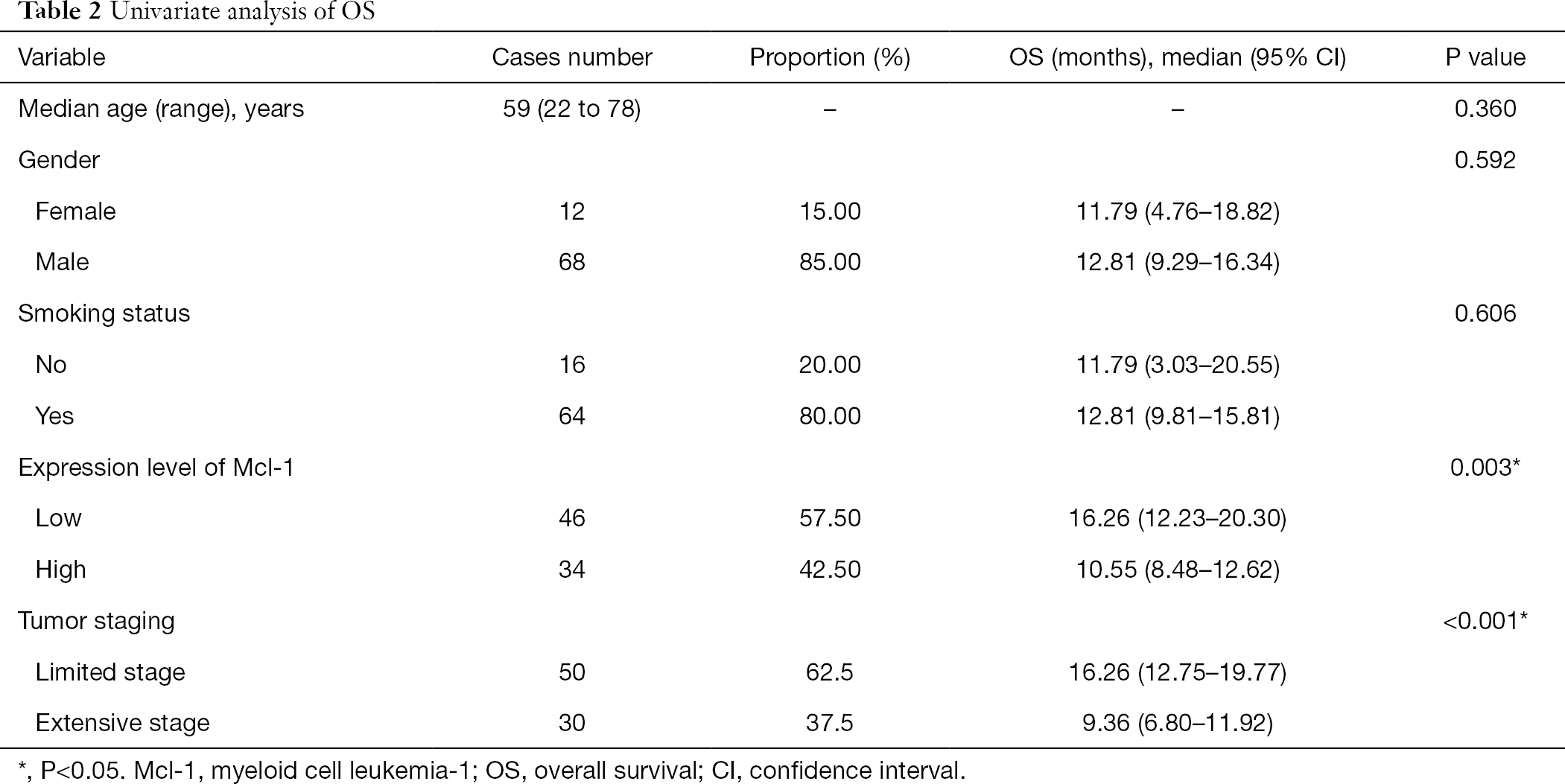 To the best of our knowledge, this is the first study evaluating the prognostic power of Mcl-1 in patients with SCLC. Our findings show that the patients with high expression level of Mcl-1 have a significantly lower OS as compared with that of the patients having low expression level of Mcl-1. Multivariable analysis has demonstrated that the lower expression level of Mcl-1 is independently associated with longer OS. In recent years, accumulating lines of evidence have suggested that overexpression of Mcl-1 is the most common genetic alterations in several types of human cancers, including breast cancer, ovarian cancer and melanoma (15,16,27). Similarly, Mcl-1 has been regularly found to be overexpressed in lung cancer cell lines (17,28,29). Data about the prognostic value of Mcl-1 have been emerging, with the results indicating that Mcl-1 is closely related to the survival benefit in the patients with breast, pancreatic, and gastric cancer (10,30,31). Furthermore, the beneficial prognostic role of Mcl-1 in clinical outcomes for the patients with non-small lung cancer cells (NSCLC) has also been verified in some researches (32-34). The results reported in the current study are in accordance with the outcomes reported in these previous studies regarding NSCLC patients, with a similar prognostic power that Mcl-1 is significantly associated with poor prognosis (high Mcl-1 group vs. low Mcl-1 group: 8.48–12.62 vs.12.23–20.30, P=0.003). Mcl-1 is a virtual anti-apoptotic protein and exerts its anti-apoptotic power to promote tumor development and progression (12). While the tumorigenesis mechanism of Mcl-1 in SCLC was unclear, its anti-apoptotic function may be explained by our results showing that Mcl-1 expression is negatively associated with OS in SCLC patients. Another underlying mechanism might be related to the direct interaction of Mcl-1 with AKT at the pleckstrin homology (PH) domain (35), which plays a significant role in maintaining AKT in an inactive state. Moreover, Hong et al. also found that Mcl-1 was significantly associated with AKT/mTOR pathway (36). Thus, targeting the mTOR/Mcl-1 axis can be effective against SCLC.

However, there are several limitations for the present study. First, this is a retrospective and single-centered study, and thus, it may have the potential selection bias. To minimize this bias, we have identified the consecutive patients, and after adjustment for basic clinical characteristics, Mcl-1 also acts as the independent prognostic factor. Second, nowadays, the addition of programmed cell death ligand 1 (PD-L1) antibody to chemotherapy has become a new regime for the first-line treatment of SCLC patients. Whether Mcl-1 can serve as the prognostic factor for the patients receiving combined immunotherapy and chemotherapy is still needed to be further explored. Certainly, prospective, large-scale, and multiple-centered studies are needed to further verify our findings.

In conclusion, this study has demonstrated that lower expression level of Mcl-1 is an independent prognostic biomarker for longer OS in SCLC patients. Moreover, the results of TTP analysis, which are consistent with those reported in the previous in vitro studies, indicate that lower Mcl-1 expression level is also associated with better TTP. Therefore, the patients with higher Mcl-1 expression level may be at an increased risk of failure and death, and more aggressive therapy regime should be considered.

Reporting Checklist: The authors have completed the REMARK reporting checklist. Available at http://dx.doi.org/10.21037/atm-20-2305

Conflicts of Interest: All authors have completed the ICMJE uniform disclosure form (available at http://dx.doi.org/10.21037/atm-20-2305). The authors have no conflicts of interest to declare.

Ethical Statement: The authors are accountable for all aspects of the work in ensuring that questions related to the accuracy or integrity of any part of the work are appropriately investigated and resolved. The study was conformed to the provisions of the Declaration of Helsinki (as revised in 2013) and approved by the Institutional Review Board of SYSUCC (ID: B2019-140-01). The written informed consent was obtained from each participant.