Hepatocellular carcinoma (HCC) is the fifth most common cancer, and the third-leading cause of cancer-related mortality globally (1). At present, surgical resection is one of the most effective treatments with curative potential (2). However, because of the high incidence of tumor recurrence, long-term survival, the outcome after surgery is unsatisfactory and far from homogenous (3,4). Therefore, the stratification of these patients for individualized evaluation and follow-up after surgery is vitally important.

There is no consensus regarding the optimal tool for prognostic evaluation. The commonly used staging systems, including the 8th American Joint Committee on Cancer (AJCC) and Barcelona Clinic Liver Cancer (BCLC), have been proposed for risk stratification (5,6). However, these staging systems cannot provide an accurate prediction of the outcomes of individual patients, which various factors influence, including general condition, aggressive tumor characteristics, and systemic inflammation.

In this study, we used a large patient cohort to develop and validate novel nomograms incorporating clinical parameters and systemic inﬂammation to predict the long-term outcome for HCC patients after radical resection.

We present the following article in accordance with the TRIPOD reporting checklist (available at http://dx.doi.org/10.21037/atm-20-1919).

This study was conducted in accordance with the Declaration of Helsinki (as revised in 2013) and was approved by the Institutional Ethics Committee of the Eastern Hepatobiliary Surgery Hospital (No. EHBHKY-2019-11-009). We obtained informed consent from each patient for their data to be used for research purposes. We reported this study according to the TRIPOD guidelines (19).

Between January 2008 and December 2014, data of patients with HCC who underwent primary hepatectomy at Eastern Hepatobiliary Surgery Hospital were prospectively collected and retrospectively analyzed.

The inclusion criteria were: (I) no extrahepatic metastasis; (II) no macrovascular invasion; and (III) R0 resection, which was defined as complete resection of the tumor with negative margins (20). Patients who underwent preoperative anticancer treatments, perioperative death, received palliative tumor resection, had a history of another type of cancer, had incomplete pathological data, or were lost to follow-up within 60 days after, it excluded surgery from the analysis.

Blood samples were obtained within 14 days before surgery for routine laboratory tests for liver function and blood cells. The formulas and cutoff values of NLR, LMR, NrLR, PLR, PNI, GPR, and SII are shown in Table S1.

We followed up with the patients once every three months for the first two years after discharge from the hospital and every three to six months after that. The follow-up program included liver function, serum AFP level, and an imaging study such as abdominal ultrasonography, contrast-enhanced abdominal computed tomography (CT), and abdominal magnetic resonance imaging (MRI). We based the diagnosis of recurrent HCC on CT and/or MRI and elevated AFP levels.

All statistical tests were two-tailed, and P<0.05 represented statistical significance. All statistical analyses were performed with R version 3.5.2 (http://www.r-project.org/). The R packages of “rms”, “stdca”, “timeROC”, “CsChange”, “DynNom”, “survminer”, and “survival” were used in this study.

Risk groups were generated by the previously reported cutoffs (50th and 85th percentile) of the score calculated by the nomogram (21). Kaplan-Meier analysis of each risk group was plotted for each cohort. 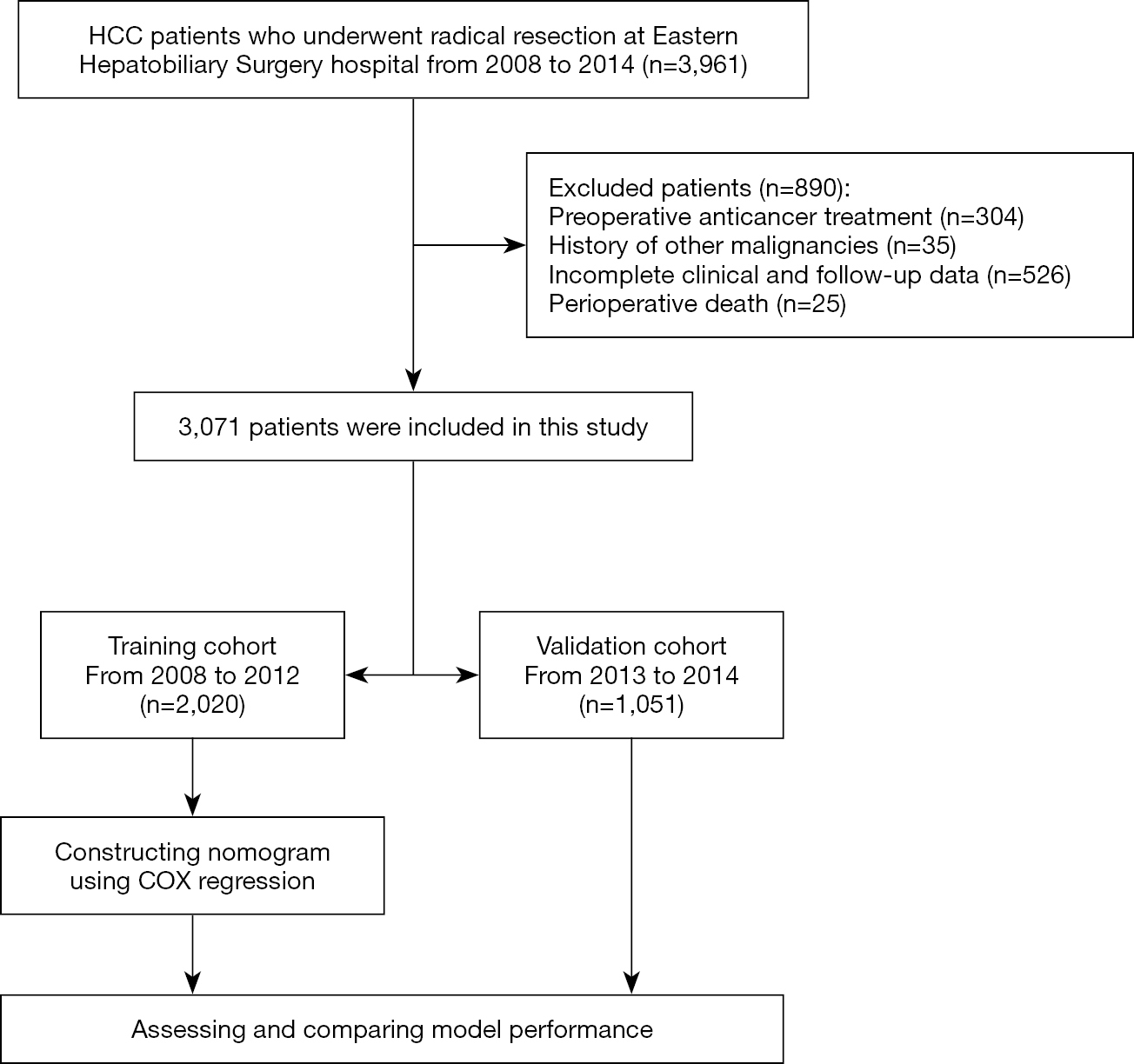 Figure S1 The flow chart in the study.

We show the baseline characteristics of patients in Table 1. The included patients had a mean age of 51.6 years (SD, 10.8 years), 86.7% were male, and 89.4% were positive for hepatitis. Pathological examination showed that more than half of the patients had cirrhosis surrounding the hepatic tumor, and 78.6% had albumin-bilirubin (ALBI) grade 1 liver function. In terms of surgical factors, a resection margin of less than 10 mm was observed in 2,423 patients (78.9%); 236 (7.7%) patients suffered an operative bleeding loss amount of more than 800 mL, and 279 (9.1%)required a blood transfusion during the perioperative period. Most patients had single tumors, and the average size of intrahepatic tumors was 6.24 cm (SD, 3.70 cm). Histologically, microvascular invasion and Edmondson-Steiner grades III-IV were recorded in 958 (31.2%) and 2,636 (85.8%) patients, respectively. Seven inflammation-related indexes (including NLR, LMR, NrLR, PLR, PNI, GPR, and SII) are also presented in Table 1. Some characteristics, such as AFP, blood transfusion, operative bleeding loss, and tumor size, and most of the inflammation-related indexes differed slightly between the training and validation cohorts. 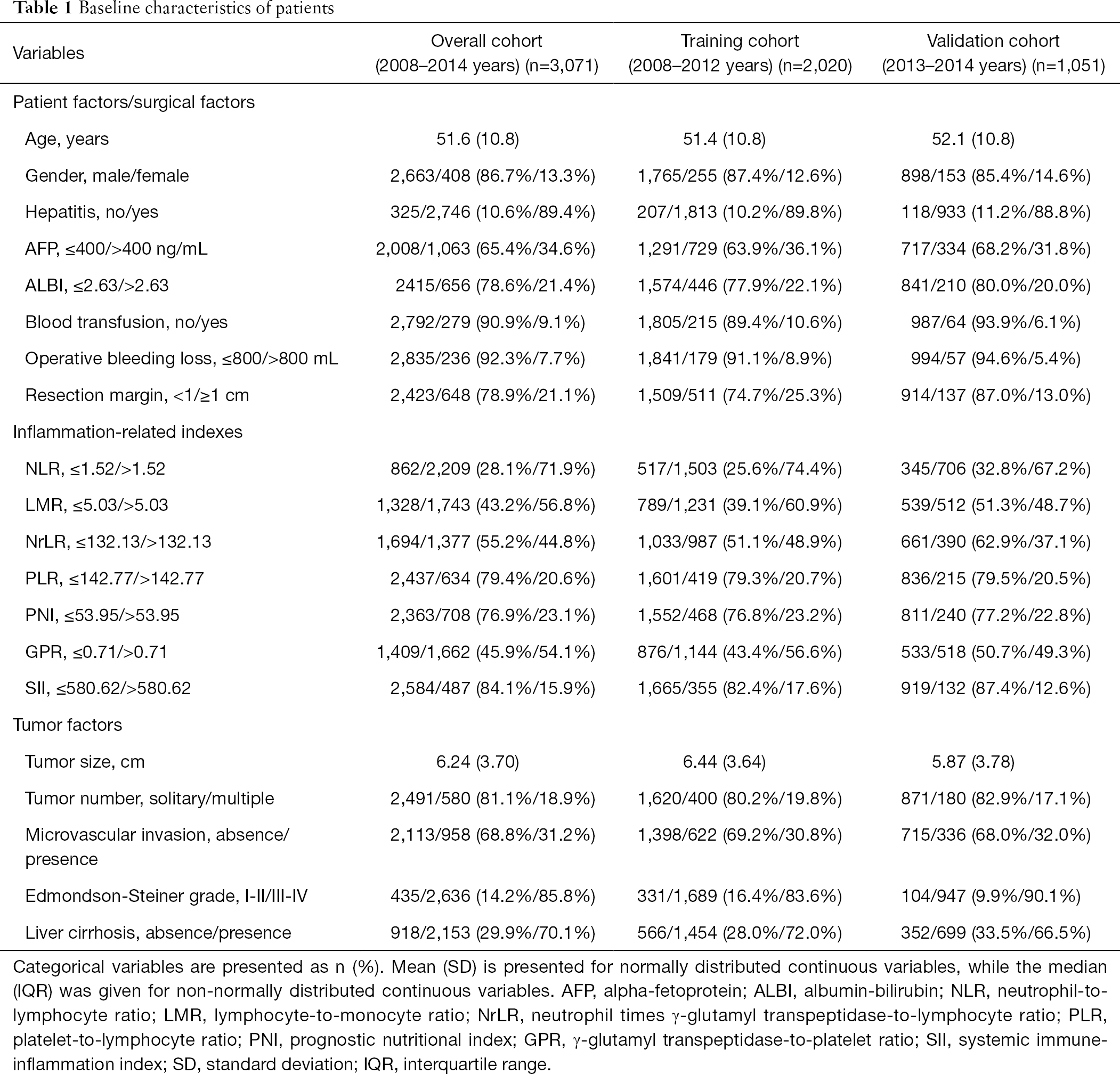 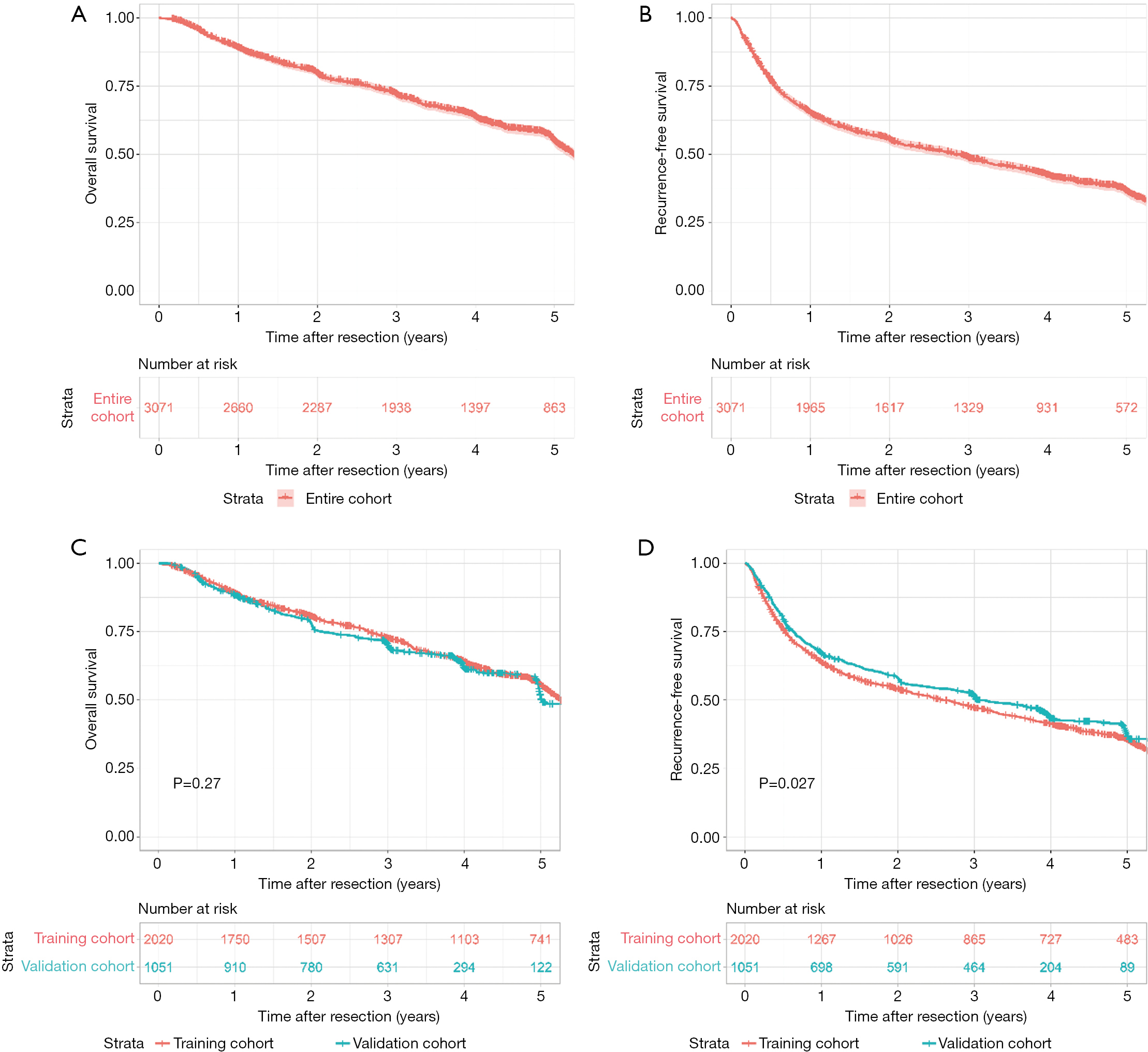 Prognostic nomograms for OS and RFS

Univariate Cox regression analysis was performed to determine the risk factors associated with OS and RFS in the training cohort. The results are shown in Table S2. Multivariate Cox regression analysis revealed that AFP of >400 ng/mL, a resection margin of <1 cm, NrLR of >132.13, PLR of >142.77, GPR of >0.71, a tumor size of ≥5 cm, multiple tumors, microvascular invasion, and an Edmondson-Steiner grade of III-IV were the independent risk factors associated with OS (Table 2). These factors were incorporated to construct a prognostic nomogram to predict one-, three- and five-year survival (Figure 1A). Based on the nomogram, a simple, easy-to-use predictive tool was developed and is available at https://recurrenceprediction.shinyapps.io/dynnomos/ (Figure S3A). 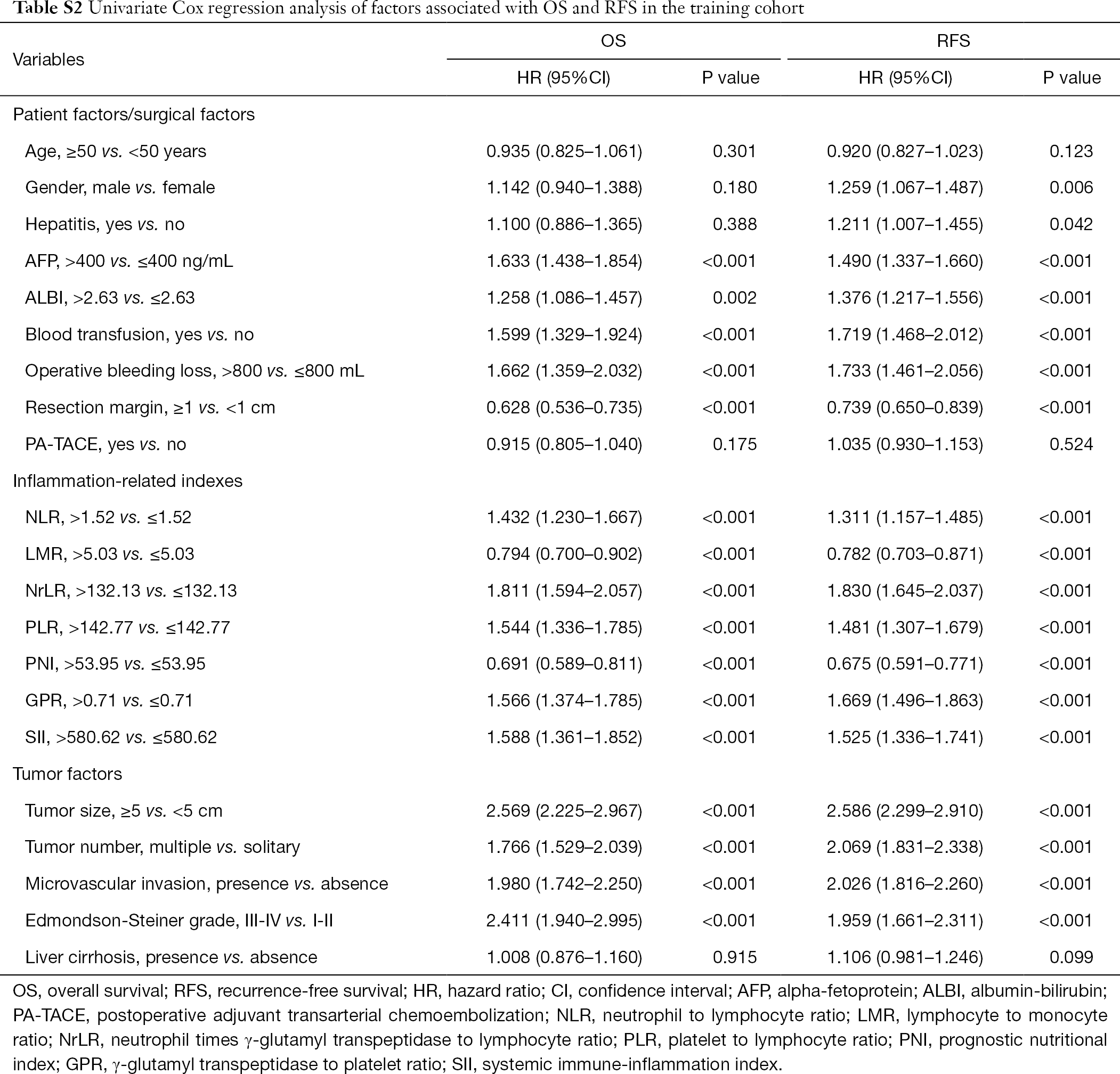 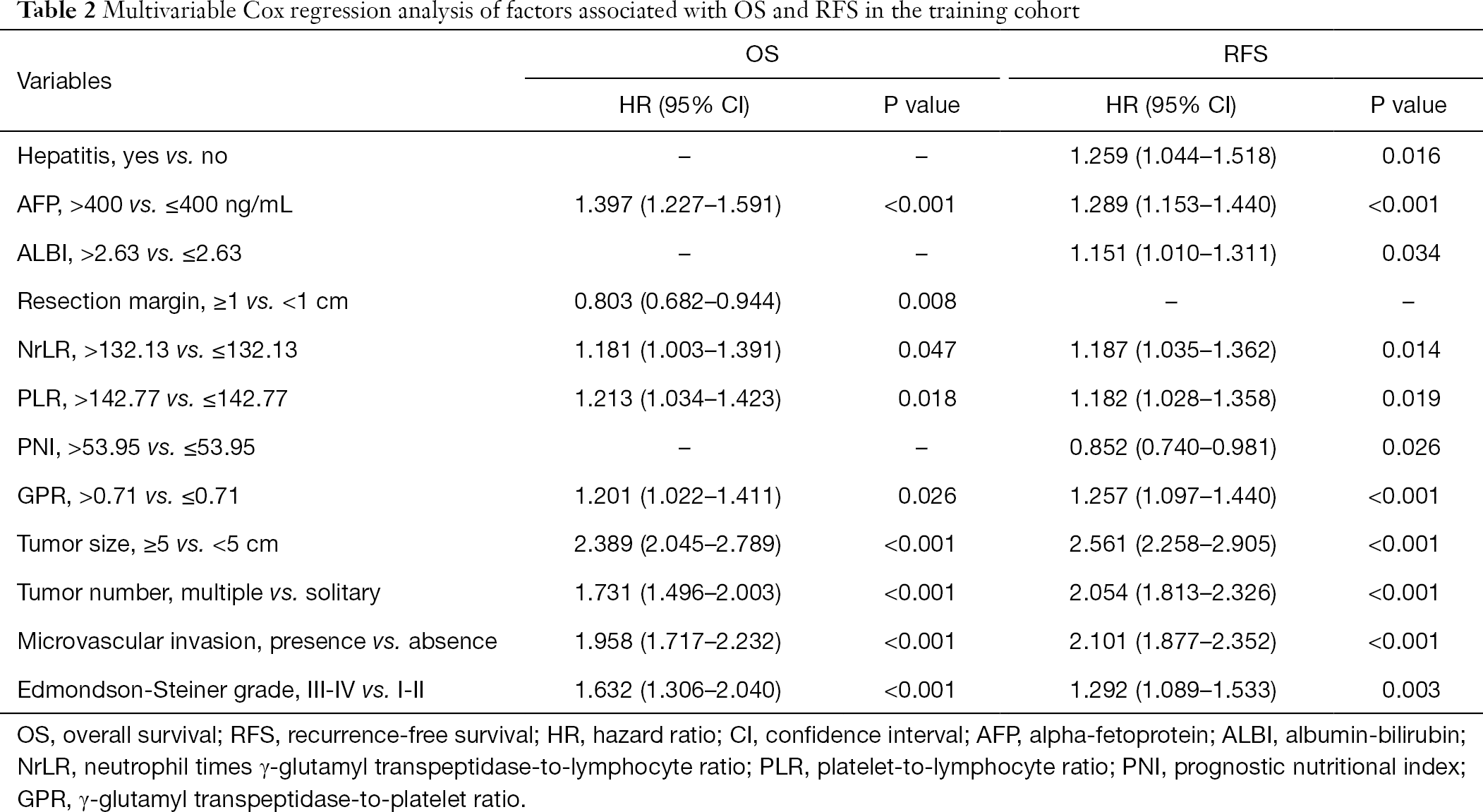 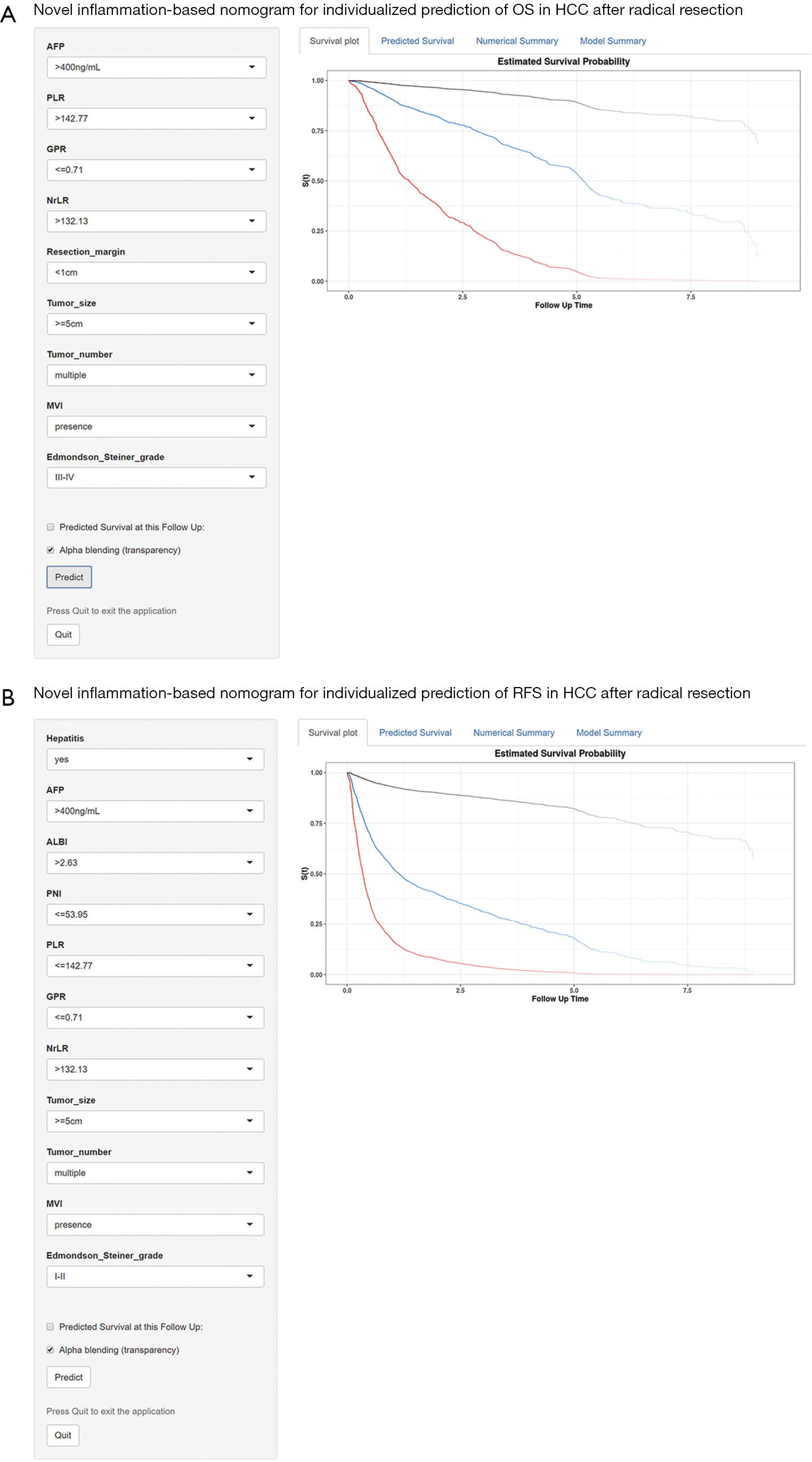 Figure S3 Screenshot of the online individualized predictive tool based on the prognostic nomograms in predicting overall survival (A) and recurrence-free survival (B).

Hepatitis, AFP of >400 ng/mL, ALBI of >2.63, NrLR of >132.13, PLR of >142.77, PNI of ≤53.95, GPR of >0.71, a tumor size of ≥5 cm, multiple tumors, microvascular invasion, and an Edmondson-Steiner grade of III-IV were the independent risk factors associated with RFS by multivariate analysis (Table 2). These variables were used to draw a prognostic nomogram to predict one-, three- and five-year RFS (Figure 1B). Based on the nomogram, a simple predictive tool was developed for clinicians and is available at https://recurrenceprediction.shinyapps.io/dynnomrfs/ (Figure S3B). 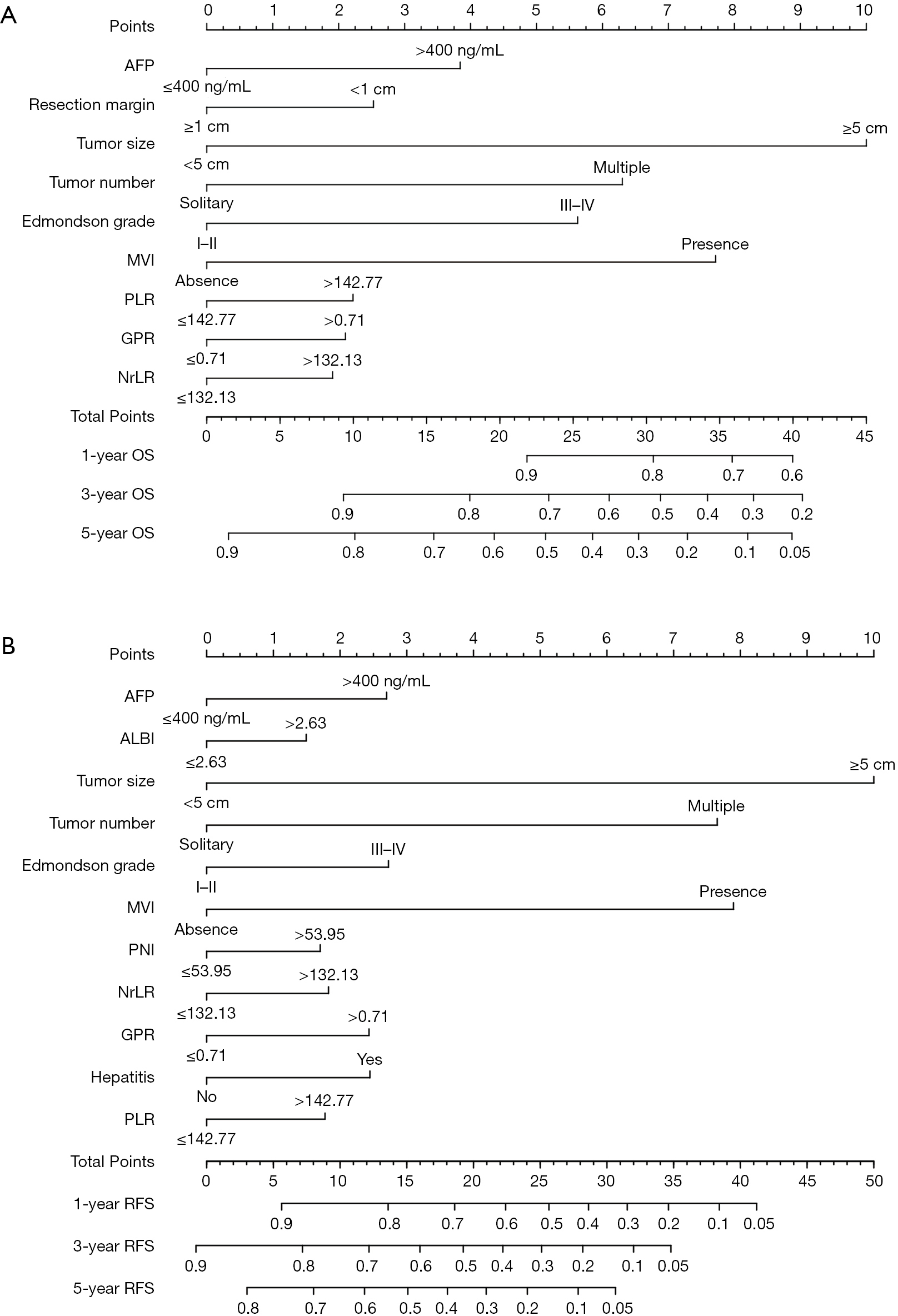 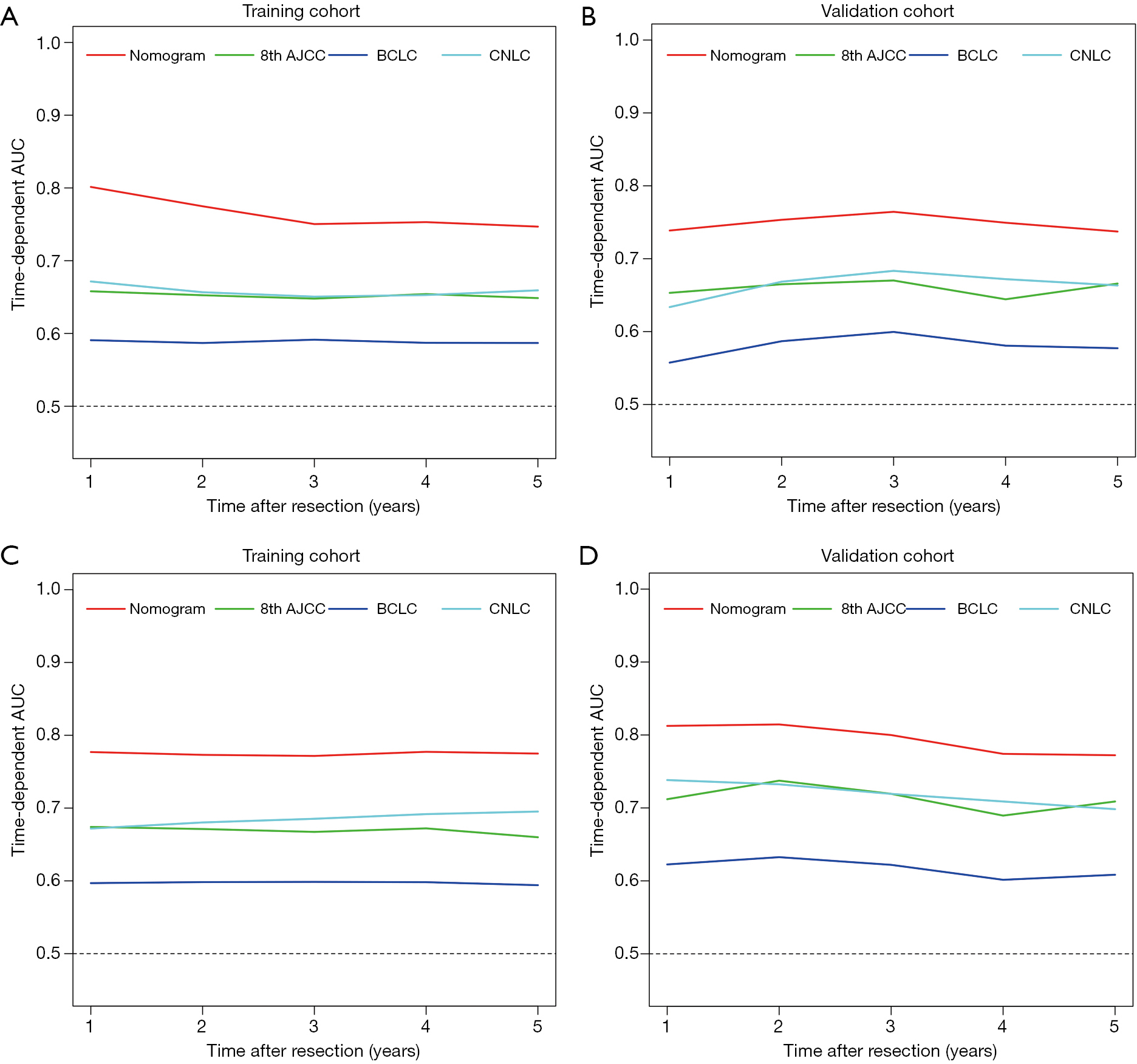 DCA was used to compare clinical usefulness. As shown in Figure 3, DCA was used to calculate the clinical usefulness of each model according to the risk probability threshold (x-axis) and net benefit (y-axis). DCA revealed that the prognostic nomograms had better net benefits in both the training and validation cohorts than the 8th AJCC, BCLC, and CNLC staging systems. 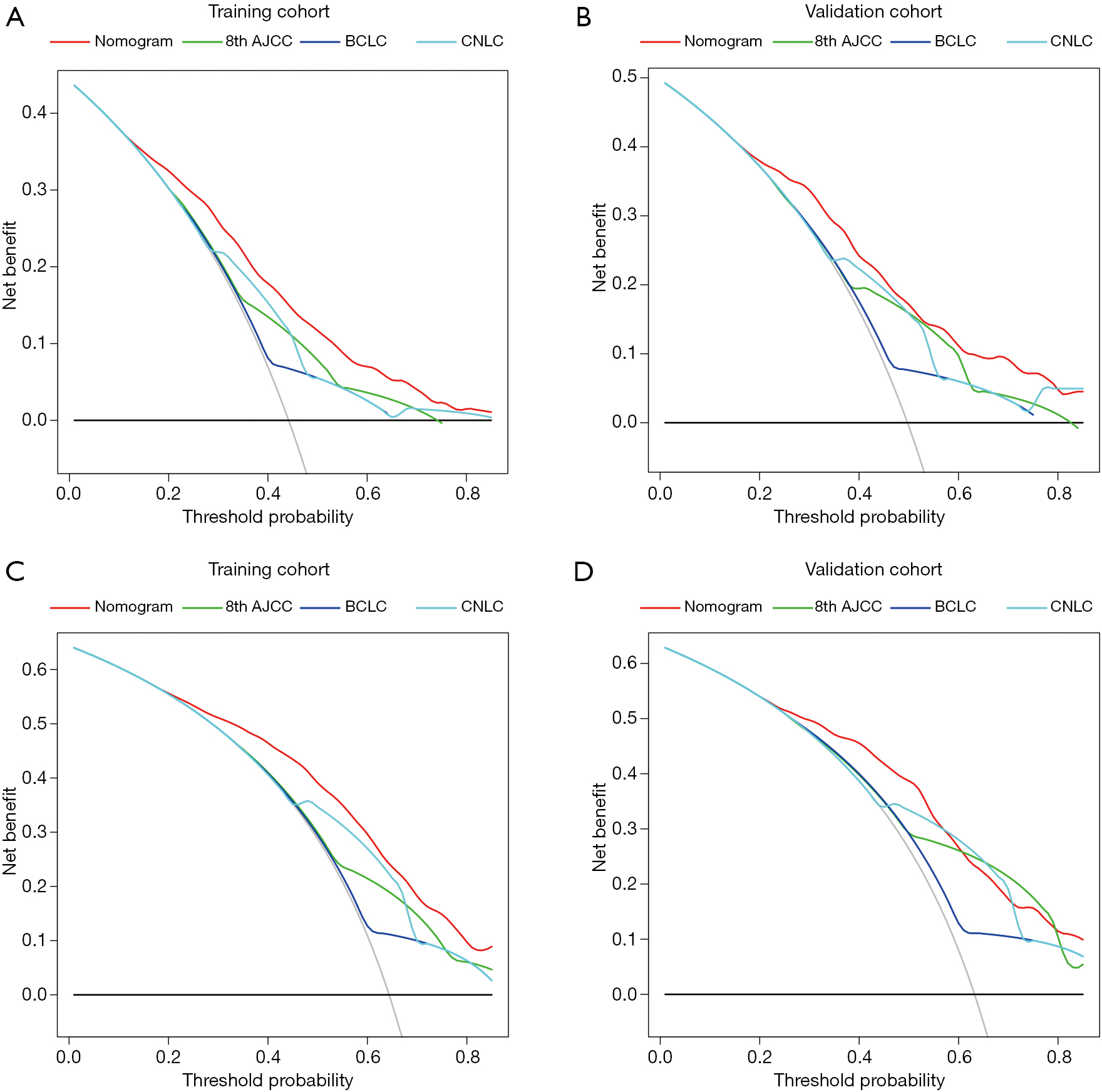 Overall, the calibration curves displayed a good agreement between the prediction of the prognostic nomograms and actual outcomes in the training and validation cohorts (Figure 4). 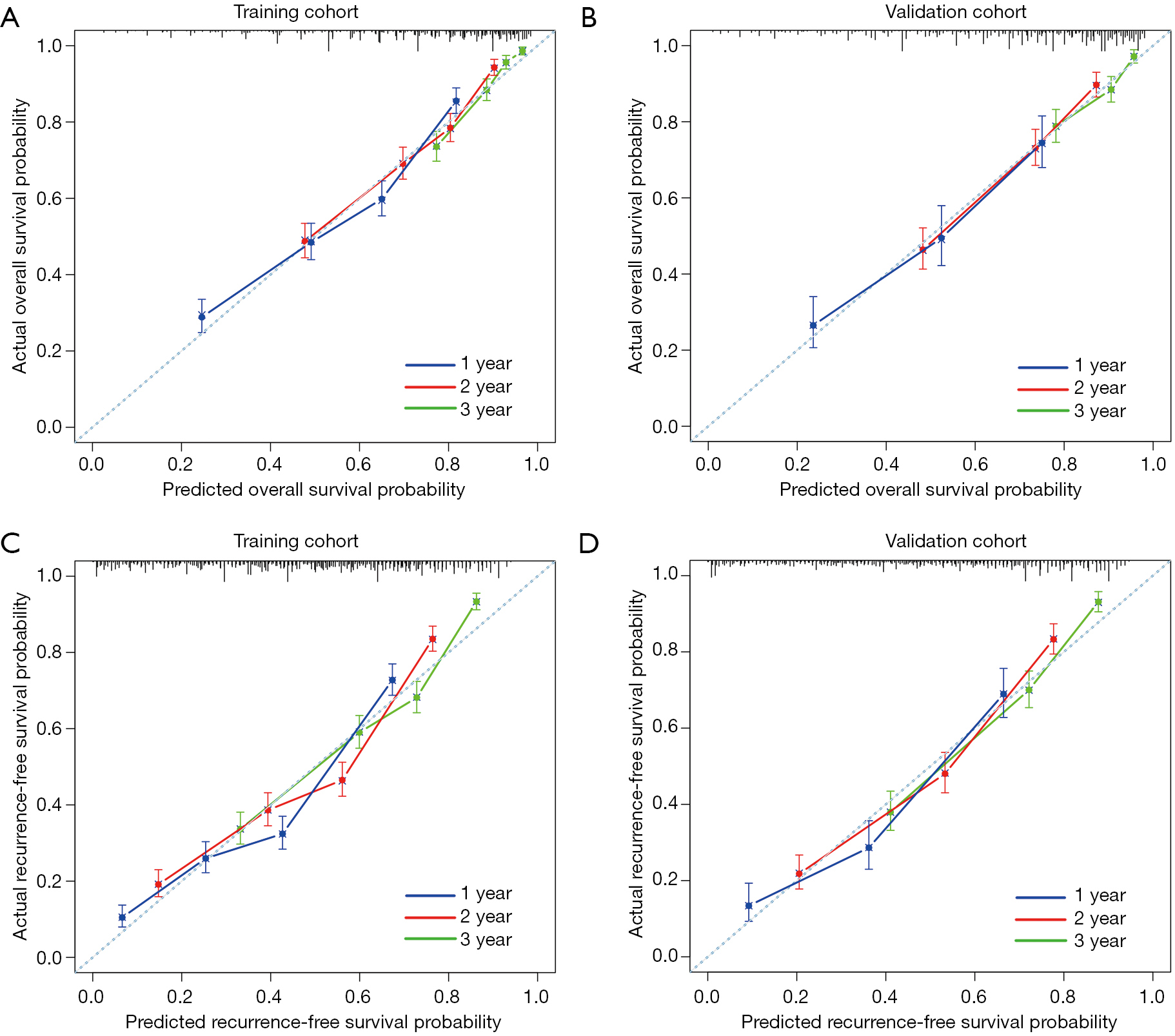 Based on the score calculated by the nomogram for OS, using 20.36 and 29.87 as the cutoff values (which correspond to the 50th and 85th percentile of the score in the training cohort, respectively), the patients were classified into low-risk, intermediate-risk, and high-risk groups. Kaplan-Meier analysis showed that the OS rates stratified prognosis among the three risk groups in the training and validation cohorts (P<0.0001) (Figure S4A,B). 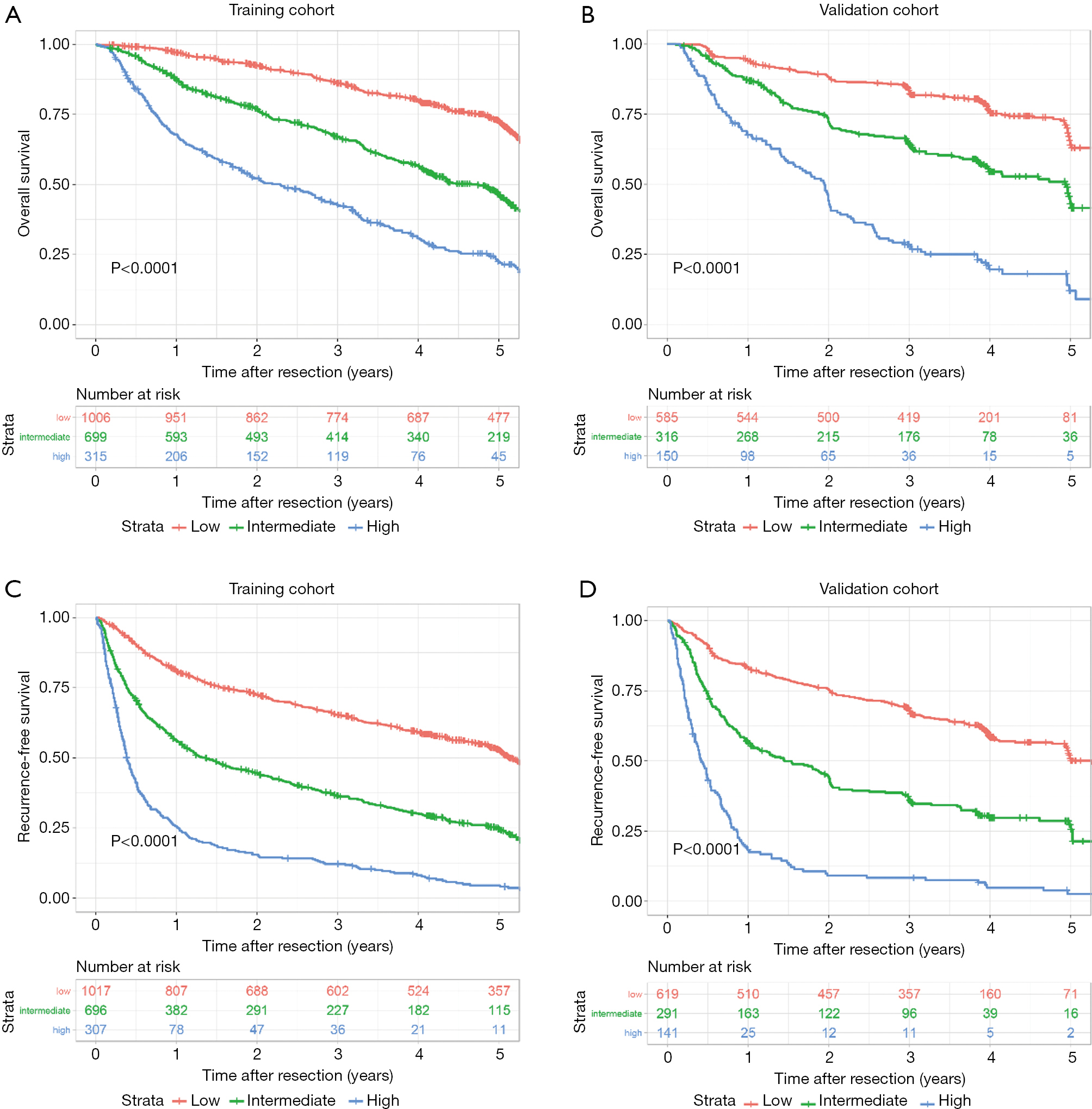 Based on the score calculated by the nomogram for RFS, using 19.58 and 29.03 as the cutoff values (which correspond to the 50th and 85th percentiles of the score in the training cohort, respectively), three distinct risk groups were also stratified. Kaplan-Meier analysis showed that the RFS rates were significantly different among the three risk groups in the training and validation cohorts (P<0.0001) (Figure S4C,D).

Based on our large cohort study, we developed and validated novel nomograms to predict prognosis in HCC patients who underwent radical resection. The C-index, time-dependent AUC, and DCA of the nomograms showed significantly better predictive performance than commonly used staging systems. The calibration curves also showed a good correlation between the prediction and the actual outcome. The models could stratify patients into three different risk groups: the low-risk, intermediate-risk, and high-risk groups. These predictive models could facilitate the easy planning of individualized surveillance of surgical patients and postoperative adjuvant therapy trials for high-risk patients to be designed.

HCC is an inflammatory disease, and there is growing evidence that emphasizes the important role of inflammation in cancer progression (8). Consistent with the results of previous studies, we found NrLR, PLR, and GPR to be independent risk factors of prognosis in HCC (11,12,14). These inflammation-related indexes comprise serum neutrophilia count, lymphopenia count, platelet count, and GGT level. Recent studies have indicated that neutrophils can promote cancer cell proliferation and metastasis through the release of angiogenic factors and inflammatory mediators (25,26). Lymphocytes, on the other hand, play an anticancer role in host immunity by inducing apoptosis and inhibiting cancer cell migration and invasion (8,27). The low platelet count noted in a considerable proportion of patients with cirrhosis is a well-known indicator of portal hypertension (28). Moreover, a high level of GGT was found to be associated with larger tumor size, multiple tumors, and vascular invasion, and was significantly correlated with prognostic outcome in patients with HCC (29,30). However, the molecular mechanism of NrLR, PLR, and GPR in HCC prognosis is still unclear.

We also found that PNI and ALBI were independent risk factors of tumor recurrence in HCC. Chan et al. reported that PNI was a predictor of tumor recurrence in the BCLC 0/A stage HCC after surgical resection (13). ALBI is another independent prognostic indicator of tumor recurrence and is used in SS-CLIP and ERASL models (31,32). Albumin is an important component in PNI and ALBI. Hypoalbuminemia in patients with HCC not only contributes to impaired liver function, caused by the underlying chronic liver disease, but is also associated with a sustained systemic inflammatory response, either from the tumor itself or as a host reaction (33).

There are several limitations to our study. Firstly, the nomograms were established using the data mostly from HBV-infected HCC patients. Markers of chronic liver inflammation, fibrosis, and cirrhosis, including HBV-DNA, HBsAg, and HBeAg, and anti-viral therapy, were not analyzed in this study. Therefore, our results need external validation in different geographic regions and etiology. Secondly, blood cell and liver function levels are affected by infection and metabolic syndrome. Although the results may have incurred some level of bias, infection, and metabolic syndrome can also impact the prognosis of HCC. Thirdly, the application of the nomograms in clinical practice could prove challenging, but simple online tools help to overcome this problem.

Funding: This study was supported by the Special Fund of Fujian Development and Reform Commission (31010308) and the Natural Science Foundation of Fujian Province (2018J01140).

Reporting Checklist: The authors have completed the TRIPOD reporting checklist. Available at http://dx.doi.org/10.21037/atm-20-1919

Conflicts of Interest: All authors have completed the ICMJE uniform disclosure form (available at http://dx.doi.org/10.21037/atm-20-1919). The authors have no conflicts of interest to declare.

Ethical Statement: The authors are accountable for all aspects of the work in ensuring that questions related to the accuracy or integrity of any part of the work are appropriately investigated and resolved. This study was conducted in accordance with the Declaration of Helsinki (as revised in 2013) and was approved by the Institutional Ethics Committee of the Eastern Hepatobiliary Surgery Hospital (No. EHBHKY-2019-11-009). We obtained informed consent from each patient for their data to be used for research purposes.