Achalasia is an esophageal motility disorder characterized by an impaired lower esophageal sphincter (LES) relaxation and the absence of esophageal peristalsis, resulting in a functional outflow obstruction at the gastroesophageal junction (1,2). This rare disease has an incidence of 1.6 cases per 100,000 population a year (3,4).

Esophageal achalasia can be classified according to manometric characteristic and/or radiological findings (Figures 1,2) (5,6). 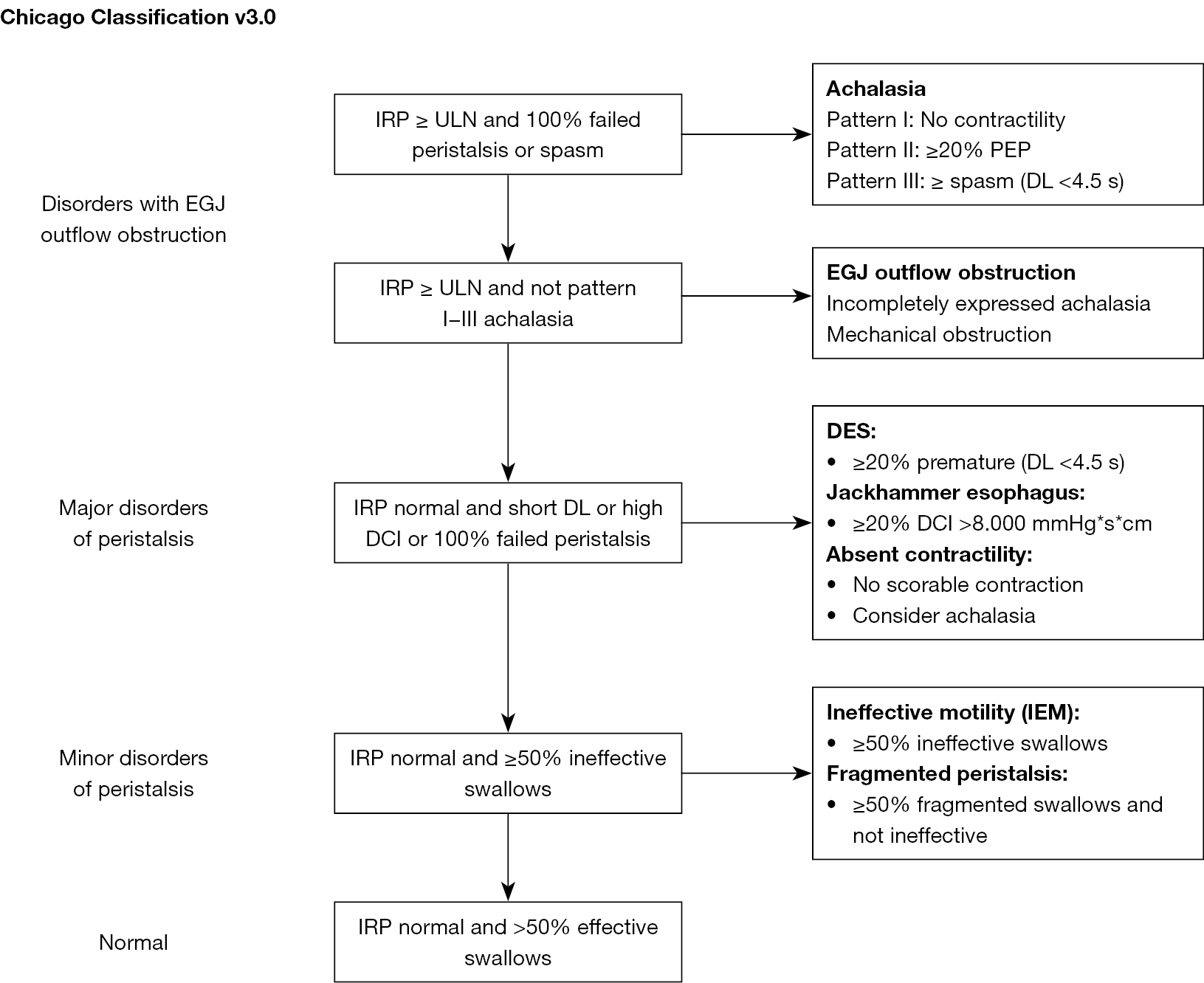 From the manometric standpoint, cases of esophageal achalasia are distinguished on the grounds of three clinically relevant patterns according to the Chicago Classification (5). It is currently unclear whether they represent distinct entities or are part of a disease continuum with the possibility of transition from one pattern to another.

Recently we proposed the hypothesis that the three patterns might represent three different stages of the same disease (7). Here we report on four cases of patients with esophageal achalasia who moved from a pattern into another without any treatment, thus supporting this hypothesis.

A 76-year-old female outpatient was assessed for dysphagia, food regurgitation and chest pain elsewhere 3 years ago. Endoscopy suggested gastroesophageal reflux disease (GERD) due to a hypotonic cardia, although the absence of esophageal mucosal injuries or hiatal hernia. High-resolution manometry (HRM) of the esophagus revealed achalasia type III (with 4 premature contractions), however, with a median esophageal-gastric-junction (EGJ) basal pressure of 40.2 mmHg, and an integrated relaxation pressure (IRP) of 25 mmHg. Barium swallow showed an undilated esophagus with tertiary waves and slow transit of the barium through the cardia.

The patient refused any treatment at the time because her symptoms were mild and intermittent.

In 2018, she was re-admitted to our esophageal clinic complaining of progressive dysphagia and reported a weight loss of 5 kg within the last 6 months. A follow-up barium swallow showed a moderately dilated esophagus, while endoscopy revealed no difference compared with the procedure performed 3 years before. Esophageal HRM manometry was repeated, revealing a pattern II achalasia with an EGJ basal pressure of 52.7 mmHg, and an IRP of 33.8 mmHg.

The patient underwent laparoscopic Heller myotomy with a Dor fundoplication and is currently symptom-free, 3 months after her surgical procedure.

A 76-year-old female underwent manometry and pH monitoring for symptoms typical of gastric reflux (heartburn and regurgitation) 3 years ago. A few months before coming to our attention, an endoscopy had been suggestive of a hypotensive LES. On HRM, her EGJ showed a normal basal pressure with a median IRP 15.3 mmHg (n.v. <15 mmHg). The motility of the esophageal body was normal. The picture emerging from pH monitoring was normal. Barium swallow showed an undilated esophagus with a normal transit through the cardia (Figure 3).

Figure 3 Case#2. (A) First barium swallow showing no dilation of the esophagus and a normal transit through the cardia; (B) the HRM study showed an Outflow obstruction with normal peristalsis. HRM, high-resolution manometry.

Eighteen months later, esophageal HRM was repeated because the patient started to complain of dysphagia and food regurgitation. Once again, the EGJ basal pressure, and relaxation were both normal. The esophageal body showed a 100% simultaneous contraction with 3 spastic waves, however, so achalasia type III was considered in spite of the normal IRP (Chicago Classification v3.0 and Salvador et al.) (5,7,8). We lost track of the patient for a year, then she returned to our laboratory for repeat manometry due to a worsening dysphagia. The new HRM revealed a typical type II achalasia, with a LES basal pressure of 45.3 mmHg and a severely impaired EGJ relaxation (IRP was 29.8 mmHg). Barium swallow showed a slow transit to the cardia (“bird’s beak” sign) with stasis in the distal part of the esophagus (Figure 4). The patient underwent laparoscopic Heller myotomy with a Dor fundoplication with complete symptoms resolution, also at 12 months after surgery.

A 63-year-old male complained intermittent non-cardiac chest pain in the last 5 years. One year ago, he developed also paradoxical dysphagia with mild regurgitation; he immediately underwent upper endoscopy that was negative and then to HRM. At this latter, EGJ showed a basal pressure of 42 mmHg but with an impaired post-deglutitive relaxation (median IRP 17.6 mmHg*s). The motility of the esophageal body was aperistaltic, with a combination of panpressurization and premature and spastic contractions (60% and 40%, respectively). The final report of the procedure was pattern III Achalasia.

Patient was informed of his pathology and a surgical procedure was proposed elsewhere. He preferred to ask for a second opinion because of the intermitting features of his symptoms.

After 6 months we decided to repeat an upper endoscopy, a barium swallow and HRM. At upper endoscopy a mild pop-opening at EGJ was noticed, with a small para-esophageal hernia; biopsy samples were negative for eosinophilic esophagitis. Barium swallow documented only mild spastic activity of the proximal esophageal body. HRM documented type II Achalasia pattern with 100% of panpressurization, EGJ resting pressure 46 mmHg and median IRP 23 mmHg*s.

A 46-year-old female complaining of chest pain underwent HRM 3 years ago. At HRM, EGJ had a normal basal pressure (39.8 mmHg) with an impaired relaxation: median IRP 31.2 mmHg. The motility of the esophageal body was abnormal, with three premature and spastic contractions. According to Chicago Classification v3.0, the final report of the procedure was pattern III Achalasia (Figure 5).

Figure 5 Case #4. (A) First barium swallow showing a slow transit to the cardia with a radiological grade I achalasia; (B) the HRM showed a pattern III achalasia. HRM, high-resolution manometry.

Barium swallow showed an achalasia with radiological grade I.

Following the manometric pattern we proposed a Laparoscopic Heller-Dor since previous studies demonstrated that endoscopic treatments (i.e., pneumatic dilation and the Botox injection) showed a lesser outcome compared to surgery in this particular group of patients (9).

However, the patient decided to wait because her symptoms did not impact on her quality of life.

Three year later, HRM and barium swallow was repeated for worsening dysphagia and food regurgitation. The manometry revealed a typical type II achalasia, with an EGJ basal pressure of 50.2 mmHg and the IRP was 34.7 mmHg. The premature and spastic contractions were not evident anymore (Figure 6).

With the introduction of HRM in clinical practice, we can now see motility disorders from another view. The advantages of HRM over conventional methods include a better identification of motility disorders, and this also gives us a chance to shed light on how they evolve. The development of a practical manometric device with 36 solid-state, circumferential sensors placed 1 cm apart enables the visualization of esophageal motility as a continuum along the length of the esophagus (10). This gives us a clear, graphic picture of any segmental and global abnormal motility and/or outflow obstruction, often enabling the identification of motility disorders limited to a portion of the esophageal body (which might be overlooked by pressure sensors placed further apart). In fact, recent case reports from two groups, expert in the use of HRM, described the evolution from diffuse esophageal spasm to achalasia type III (11,12). The possibility of such a transition from one form of esophageal disorder to another (from diffuse esophageal spasm to achalasia) has been known for decades, even relying on traditional manometry, ever since the landmark paper by Vantrappen in 1979 (13). Transitions to achalasia have also been reported from nutcracker esophagus (14,15), and from other, nonspecific motility disorders (16,17).

We recently advanced the hypothesis that the three different manometric patterns seen in achalasia, and described by the Chicago Classification v3.0 (5), may represent different stages in the evolution of the disease (7,18). The strongest finding to support the “Padova theory” concerned the very different, gradually-widening preoperative esophageal diameters, which became larger from achalasia type III to types II and I. In addition, all patients with a sigmoid-shaped mega-esophagus (radiological grade IV) had a manometric pattern corresponding to achalasia type I. Another two results reinforcing our hypothesis concerned the fact that type III patients tended to have a shorter history of symptoms than patients with types I or II (this would again correlate type III with an earlier-stage disease and a smaller esophageal diameter), and that patients with type I achalasia had a higher mean symptom score than patients with types II or III. On patient follow-up after surgery, none of those with types I or II preoperatively showed type III achalasia after treatment, whereas around 50% of the patients with preoperative type III changed to achalasia types I or II after the Heller-Dor procedure. The main weakness of the study findings lay in that the patients were treated surgically, and this may have influenced any changes seen in their postoperative manometric patterns (7).

The four cases described in the present report could overcome this weakness because the manometric pattern changed from type III to type II in all patients—without any invasive treatment. This changing manometric pattern was seen in three cases already diagnosed as achalasia. In one case, we saw a transition from a normal manometric picture to the pattern of achalasia type III, and then to achalasia type II. This “mutation” coincided with worsening of patients’ symptoms.

The cases described here strongly support the hypothesis that the different manometric patterns of achalasia represent different stages in the evolution of the same disease, type III being the early stage, type II an intermediate stage, and type I the end stage of achalasia.

Conflicts of Interest: All authors have completed the ICMJE uniform disclosure form (available at http://dx.doi.org/10.21037/atm.2020.03.149). The authors have no conflicts of interest to declare.