Percutaneous treatment with Mitraclip for functional mitral regurgitation: medium-term follow up according to left ventricular function

Mitral regurgitation (MR) is one of the most prevalent valvular disease and the second most frequent indication for valve surgery in Europe (1,2). Therapeutic approach (i.e., surgical or percutaneous repair) varies depending on MR etiology. Therefore, it is imperative to discriminate properly between its different etiological mechanisms. On the one hand, if the components of the mitral valve apparatus (e.g., leaflets, chordae or papillary muscles) are directly affected, causing MR, it is considered a primary or organic MR (PMR). On the other hand, in secondary or functional MR (FMR) there is a lack of coaptation of the leaflets mainly due to left ventricular (LV) or annulus dilation, preserving the components of the mitral apparatus intact (3,4).

Patients with symptomatic MR, if left untreated, present higher rates of cardiovascular mortality and hospitalizations due to heart failure (HF) as well as an impaired quality of life (5,6). Surgical repair of PMR can correct the source of the valvular disease problem. As a result, LV volume overload is reduced and the prognosis of the patient improves (7,8). On the contrary, FRM is controversial. It is still unclear whether if the impaired prognosis in FMR is mainly due the primary disease of the LV or whether in fact FRM itself implies a vital prognostic factor. However, owing to the fact that patients with LV dysfunction and FMR have a worse prognosis than patients with LV dysfunction alone (9), it is suspected that FMR may actually play a role in determining prognosis. Nonetheless, there is no evidence to date supporting the hypothesis that repair of FMR could reverse the pathophysiology of the underlying LV disease or if it could actually improve the final prognosis (8,10).

In current European Guidelines (10), surgery is indicated in all symptomatic PMR patients with LV ejection fraction (LVEF) >30% (class I, level of evidence B). A LVEF) ≤60% and left ventricular end-systolic diameter (LVESD) ≥45 mm are known to predict a worse postoperative outcome, independent of the symptomatic status (11). Thus, if severe LV dysfunction (LVEF <30% and/or LVESD >55 mm) is present, the class of recommendation lowers to class II (IIa if reparable; IIb if mitral valve replacement is needed, level of evidence C) (10). Conversely, in chronic severe FMR symptomatic patients, despite optimal medical management and when revascularization is not indicated, surgery may be considered if surgical risk is low or percutaneous edge-to-edge procedure if the surgical risk is higher, striking with the same level of recommendation (class IIb, of evidence level C) regardless LVEF (10).

Transcatheter mitral valve repair (TMVR) using MitraClip® (Abbott Vascular, Menlo Park, California) system was initially approved for the treatment of PMR. Nevertheless, in recent European registries, 65.2–77.1% of the patients were treated for severe symptomatic FMR, with promising data in procedural success (94–99.1%) and a sustained MR reduction to a grade 2 or less (12-16). These data suggest that MitraClip® could be a promising alternative option for the treatment of such a complex disease. Thus, there are two large randomized controlled trials available comparing TMVR plus medical therapy versus medical therapy alone in FMR patients: the COAPT trial (17) and the MITRA-FR trial (18). Despite their high rates of procedure success, different clinical results in follow-up were found.

The main objective of this study is to evaluate the clinical outcomes of patients with FMR treated with MitraClip® system, according to their LVEF.

All patients moderate-severe or severe (3 to 4+) FMR, symptomatic despite guideline-directed optimal medical therapy, were evaluated by a multidisciplinary Heart Team (comprising interventional cardiologists, cardiac surgeons, HF specialized cardiologists and cardiac imaging specialists). The severity of MR was evaluated by experts cardiac imaging specialists, according to ESC guidelines criteria (10). Patients who fulfilled echocardiographic criteria of eligibility for TMVR and who were not surgical candidates were included. TMVR was performed with the MitraClip® edge to edge technique as reported elsewhere (19). Informed consent was obtained from all patients.

FMR cases undergoing MitraClip® implantation were divided into two groups according to LVEF: group 1: patients with severely impaired LVEF (LVEF less or equal to 30%); and group 2: patients with LVEF >30%. All outcomes were defined according to Valve Academic Research Consortium-2 criteria (20). Procedural success was defined as a correct release of at least one device and a MR reduction to a grade 2+ or less.

Data was obtained from two experienced centers in TMVR. All consecutive cases of FMR undergoing TMVR in both centers with the same explained inclusion criteria were included in this study, and prospectively followed-up. Periodical follow-ups with clinical and echocardiographic evaluation were scheduled from the baseline procedure, at 3 months and then yearly. There were no loses reported.

The primary combined endpoint included HF hospitalizations and all-cause mortality at the end of the follow-up. The primary endpoints HF hospitalizations and all-cause mortality were also analyzed separately. The secondary endpoints were improvement in NYHA class and the absence of severe MR at the end of the follow-up. Bleeding, as a safety endpoint, was defined according to the Bleeding Academic Research Consortium (BARC) (21). Major bleeding was defined as BARC types 3 and 5.

From October 2015 to October 2019, a total of 119 patients with FMR at 2 centers in Spain underwent TMVR with the MitraClip® procedure and were included in this study. The mean age was 73.8±8.9 years old and 32 patients (26.9%) were female. A 39.5% of cases [47] had a LVEF ≤30% (group 1) and 60.5% (72 cases) had a LVEF >30% (group 2). There was a similar distribution in cardiovascular risk factors, age and other diseases, as well as similar levels of NTproBNP among groups. There were no other significant differences between groups in Euroscore I, Euroscore II and STS scores. However, ICD/CRT implantation rate, as could be expected due to their worse LVEF, was higher in group 1 (42.5% vs. 15.3%, P<0.0001). Detailed baseline characteristics are shown in Table 1. 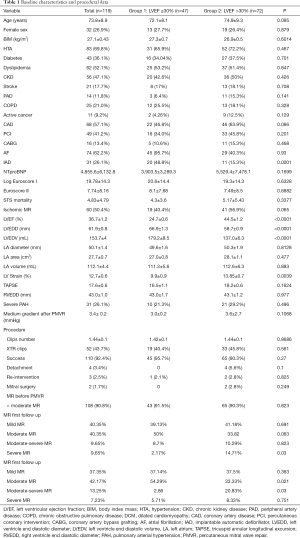 All MitraClip® implantations were elective and procedural success was achieved in 110 patients (92.4%) with a similar distribution between the groups. Similarly, there were no differences in procedural time and the number of implanted clips. There were only 4 (3.36%) cases of detachment and 2 cases that required mitral repair/replacement surgery, both from group 2. There was only 1 case, in group 1, which required a second TMVR procedure. In-hospital complications were low, with no cases of intraprocedural deaths, no vascular complications and bleeding cases according to BARC definitions (21). 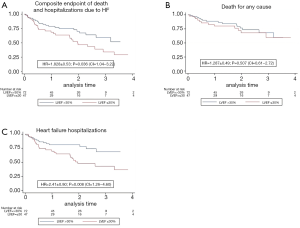 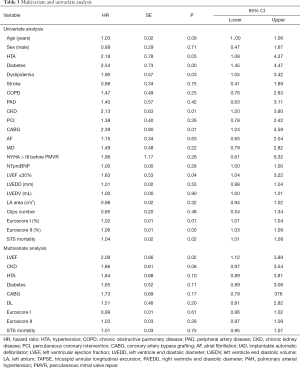 Basal severe MR was found in 90.1% of the cases, representing ischemic MR the 50.1% of them. Immediately after TMVR procedure, 79.5% achieved a grade II or less MR. Besides, a sustained reduction in MR was seen at the end of the follow-up, with only a 20.48% of the patients with grade III-IV MR, similarly in both groups.

On the one hand, the COAPT trial results support the high rates of procedure success (98%), a persisting <3 grade residual MR after the procedure and an improvement in measures of quality of life such as I-II NYHA functional class (22). Moreover, COAP trial endpoints were significantly improved in the MitraClip group compared to controls (mortality and HF hospitalization) (22). Moreover, the outcomes at 3-year follow-up of the COAPT trial were presented at TCT congress 2019, maintaining the benefits on the primary endpoint and mortality (17). On the other hand, the MITRA-FR trial also had good rates of procedure success and reduction of MR grade. Conversely, mortality and HF hospitalization at 12-month were similar both in Mitraclip and in directed medical therapy arms (18). This, there was no significant improvement in NYHA functional class either.

Despite the overall similarities in trial designs, there were important differences that may explain the disparate results between COAPT and MITRA-FR trials. Patients from COAPT trial had a more severe degree of MR and less advanced left ventricular disease (COAPT excluded patients with a LV end-diastolic diameter (LVEDD) >70 mm and LV ejection fraction <20%). In addition, the COAPT study had a longer follow-up, a more rigorous control in the administration of optical medical therapy and a lower rate of moderate or severe MR at 1 year follow-up.

In the line of previous trials, our present study also shows that the treatment of FMR with the MitraClip® edge-to-edge technique is a feasible procedure, with a high rate of success, low rate of complications before discharge and a sustained reduction in the rates of MR after one year of follow-up (presenting most patients a grade 2+ or less of MR). Moreover, an important improvement in NYHA functional class after MitraClip® implantation was shown, with 82.3% of the cases in NYHA II or less functional class. When analyzing echocardiographic data, patients from group 1 not only presented a significant worse LVEF than those from group 2 (24.7% vs. 44.5%), but also an overall significant worse LV measurements (LVEDD of 66.9 vs. 58.7 mm and LVEDV of 179.2 vs. 137 mL).

However, the differences found in primary endpoints between our groups, based on LVEF, can be considered the most important finding of this study. Patients from group 1 with a LVEF ≤30% presented worse clinical cardiovascular outcomes than those with a LVEF >30%, with a significant higher combined endpoint (57.5% vs. 31%) and higher rate of HF hospitalizations (51.1% vs. 21.1%).

This similarity should be interpreted with caution, as a formal comparison is not possible. However, it may reveal that patients with less advanced left ventricular disease could be the ones who would benefit more from the procedure, at least in survival and HF hospitalization terms. In fact, it has already been suggested that responders to mitral valve intervention were more likely to have a less advance LV disease or a disproportionate MR to LVEDV based on MITRA-FR and COAPT data (23).

In addition, a recent study by Sanchis et al. that compared MitraClip treatment in FMR patients with poor LV (LVEDD <70 mm and LVEF >20%) with those with very poor LV (LVEDD >70 mm and LVEF <20%) also supports this hypothesis (24). Patients with better LV parameters also presented significantly better cardiovascular outcomes (combination of HF Hospitalizations, heart transplant and cardiovascular death). Nevertheless, like in our study, a reduction in symptoms and an improvement in functional class were also found in both groups.

All these findings support the theory that in functional MR the underlying LV disease is the cornerstone that mainly determines the global prognosis. However, larger studies analyzing this hypothesis and looking for precise cut-off points are imperative. This may led to settle a different class of recommendation, based on LV parameters, in the forthcoming guidelines, as already given for LVEF in PMR.

The main limitations of the present study are that it is an observational two-center experience, with a limited patient population and the data analysis was performed in a retrospective manner. These findings should not define causality and further randomized controlled trials should confirm these outcomes.

The MitraClip edge-to-edge technique is a safe and effective procedure for the treatment of FMR. In this study, patients with LVEF>30 treated with TMVR presented better clinical cardiovascular outcomes (a reduced the risk of death and hospitalization for heart HF) than those with a LVEF ≤30%. However, regardless clinical outcomes, at the end of the follow-up, there was a sustained reduction in MR grades and an important improvement in NYHA functional class.

Ethical Statement: The authors are accountable for all aspects of the work in ensuring that questions related to the accuracy or integrity of any part of the work are appropriately investigated and resolved. The study was conducted in accordance with the Declaration of Helsinki (as revised in 2013). The study was approved by the corresponding IRB (reference number: 2020/026). Informed consent was obtained from all patients.