The establishment of rat model in myocardial ischemia with psychological stress

Coronary heart disease (CHD) is still the disease with the highest mortality and morbidity worldwide. Despite the improvements in the surgical and pharmacological therapies for CHD, the mortality is still high. More than 6 decades of empirical research have shown that psychological risk factors contribute both to the risk of developing CHD and the worsening of the clinical course and prognosis in patients with CHD. Evidence shows that psychological stress-induced myocardial ischemia is associated with a 2-fold increased risk of future cardiac events independent of physical stress-induced ischemia in patients with stable CHD (1,2). These factors may act as barriers to treatment adherence and efforts to improve life-style in patients. It has been proven that psychological stress can cause endocrine imbalance; leading to subsequent glucose and lipid metabolism disorder; activation of the sympathetic nervous system with hemodynamic changes; induction of coronary and peripheral vasoconstriction, transient endothelial dysfunction, arterial stiffening, and inflammation reaction changes such as increased tumor necrosis factor-α (TNF-α) and decreased secretory immunoglobin A (IgA) (3-11) which ultimately results in vessels stenosis, obstruction, and spasm.

All experimental animals were obtained from the Experimental Animal Center, Chinese PLA General Hospital (Beijing, China). Forty male Wistar rats, specific pathogen free (SPF), weighing 180±20 g, were fed a normal diet provided by the same department and housed 10 per cage at 23 °C with luminosity cycles of 12-hour light/12-hour dark and allowed free access to water and food. The protocol was approved by the Institutional Animal Care and Use Committee of the Chinese PLA General Hospital. All surgery was performed under sodium pentobarbital anesthesia. According to the recent references about the rat model of myocardial infarction, sodium pentobarbital is the most often used analgesic agent. Compared to chloral hydrate, isoflurane or urethane, sodium pentobarbital intraperitoneal injection has advantages of faster onset time, quick recovery effect, mild side effects, and lower lethality (21,22). To make sure the analgesic effect was effective, we used a slightly larger dose of sodium pentobarbital, and all efforts were made to minimize suffering.

Rats’ general condition of hair, mucosa of lips and claw, and activities were observed; body weight was measured daily.

An open-field test is considered a measurement related to anxiety (23). In order to evaluate this behavior, rats were placed in an open field arena (80 cm × 80 cm × 50 cm), divided into 25 squares (20 cm × 20 cm) in a dimly lit and noise-free room as previous described (24). Brieﬂy, rats were placed in an open ﬁeld in the same location facing the same direction. After allowing for 10 seconds of adaptation, video capturing was undertaken for the next 5 minutes. The open field was cleaned with 75% alcohol gauze pads following each test. The time spent in the central squares was quantified, and horizontal movements through each square (crossing), the times of rearing, the times of face and body washing, and the number of defecations, were recorded by 2 individuals blinded to the experiment as an anxiety index.

The maze used was based primarily on the design of Costa et al. (25). The maze consisted of 2 open arms (50 cm × 10 cm) and 2 enclosed arms (50 cm × 10 cm × 40 cm) without a roof. They intersected at the central square (10 cm × 10 cm). It was elevated 50 cm from the floor. Rats were placed on the central square of the maze facing an open arm at the beginning of the test. Following 10 seconds of adaptation, video capturing was undertaken for the next 5 minutes, and behavioral parameters were obtained. The numbers and total time of entries to the open or enclosed arms were recorded and taken by 2 individuals blinded to the experiment as an anxiety index. An entry was considered as the moment the 4 paws of the rat were placed in the respective arm.

Twenty-four hours after MI, rats were anesthetized through intraperitoneal administration of 2.3 mL/kg 2% sodium pentobarbital. The mouth was opened, and the tongue was pulled out gently. The tongue color and sublingual vein were recorded by the digital camera (D50, Nikon, Japan), and analyzed by 2 individuals blinded to the experiment.

Followed by acral blood flow perfusion measurement, rats’ mesenteries were exposed immediately and put into an observation position in a small container that was filled with 37 °C 0.9% NaCl. Mesenteric microcirculation was monitored by the use of a biomicroscope (BH-2, Olympus, Japan) equipped with a video camera (BY-110, JVC, Japan) and a computer.

Twenty-four hours after coronary occlusion, rats were anesthetized as described above. After an ECG was taken, a polyethylene tube (PE 50; Becton-Dickinson, U.S) was inserted into the left ventricular cavity via the right carotid artery. Left ventricular ±dp/dtmax was measured using a polygraph system (AP601G; Nihon Koden, Japan).

After the hemodynamic measurement, blood samples were collected from the right common carotid artery and the serum was separated by 1,000 rpm/min centrifugation for 10 minutes. The content of serum cTnT, Hcy, and activity of H-type LDH was determined with an automatic biochemical analyzer (CObas8000, Roche, Germany).

Infarct size was measured using an established method (26). The coronary artery was again briefly occluded through ligation of the tie that remained at the site of the earlier occlusion. Immediately after the ligation, 5 mL 1% Evans blue solution was infused through the catheter into the beating left ventricular cavity to delineate the ischemic area at risk. After the administration of an excessive dose of sodium pentobarbital into the left ventricular cavity, the heart was excised and cross-sectioned from the apex to the atrioventricular groove into 5 specimens of ~2 mm in thickness. These slices were incubated with a 4% TTC solution for 30 minutes at 37 °C in a dark room. Then, the ischemic but viable, infarcted area and the non-ischemic area were fixed in 10% neutral-buffered formalin for 24 hours. The infarct zone (white) was an area of necrosis (AN, Evans blue and TTC-unstained); the ischemic but viable area (red) was the TTC-stained area, and the non-ischemic area (blue) was Evans blue-stained. The area at risk (AAR) was the sum of white and red zones. These areas were measured with scanner and Image-Pro Plus (image analyzing software, Version 4.1, Media Cybernetics). Infarct size was defined as the ratio of AN/AAR.

The SPSS 13.0 version was adopted for statistical analysis. Results were expressed as means ± standard deviation. Multiple comparison analysis was performed with Tuckey-Kramer test. A P value of less than 0.05 was considered statistically significant. 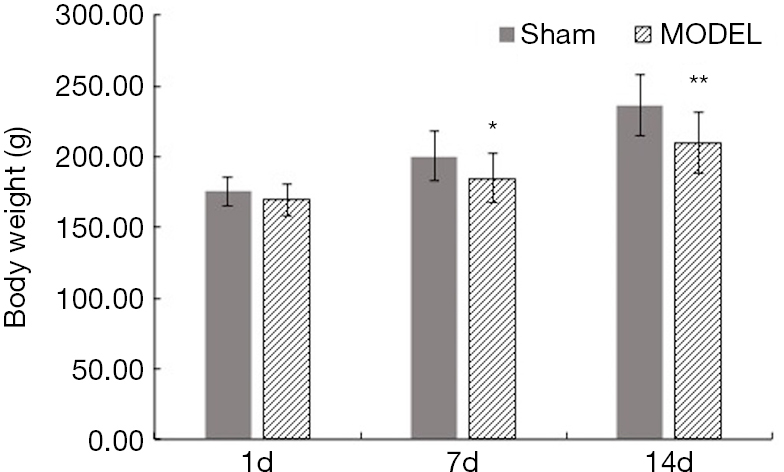 Compared with the sham rats, the MODEL rats showed a reduction in time spent in the central squares, horizontal movements through each square (crossing), times of rearing, and times of face and body washing, but increased defecation numbers. There was a significant difference in times of rearing and washing (P<0.05 vs. sham group), indicating an increased anxiety in the open-field test (Figure 2).

Compared with the sham rats, the MODEL rats showed a reduction in time spent in the open arms and numbers of entries into the open arms, but there was no significant difference (P>0.05). Meanwhile, the time spent in the close arms significantly was increased among the MODEL rats (P<0.05 vs. sham rats), suggesting that the anxiety increased in the elevated plus-maze (Figure 3). 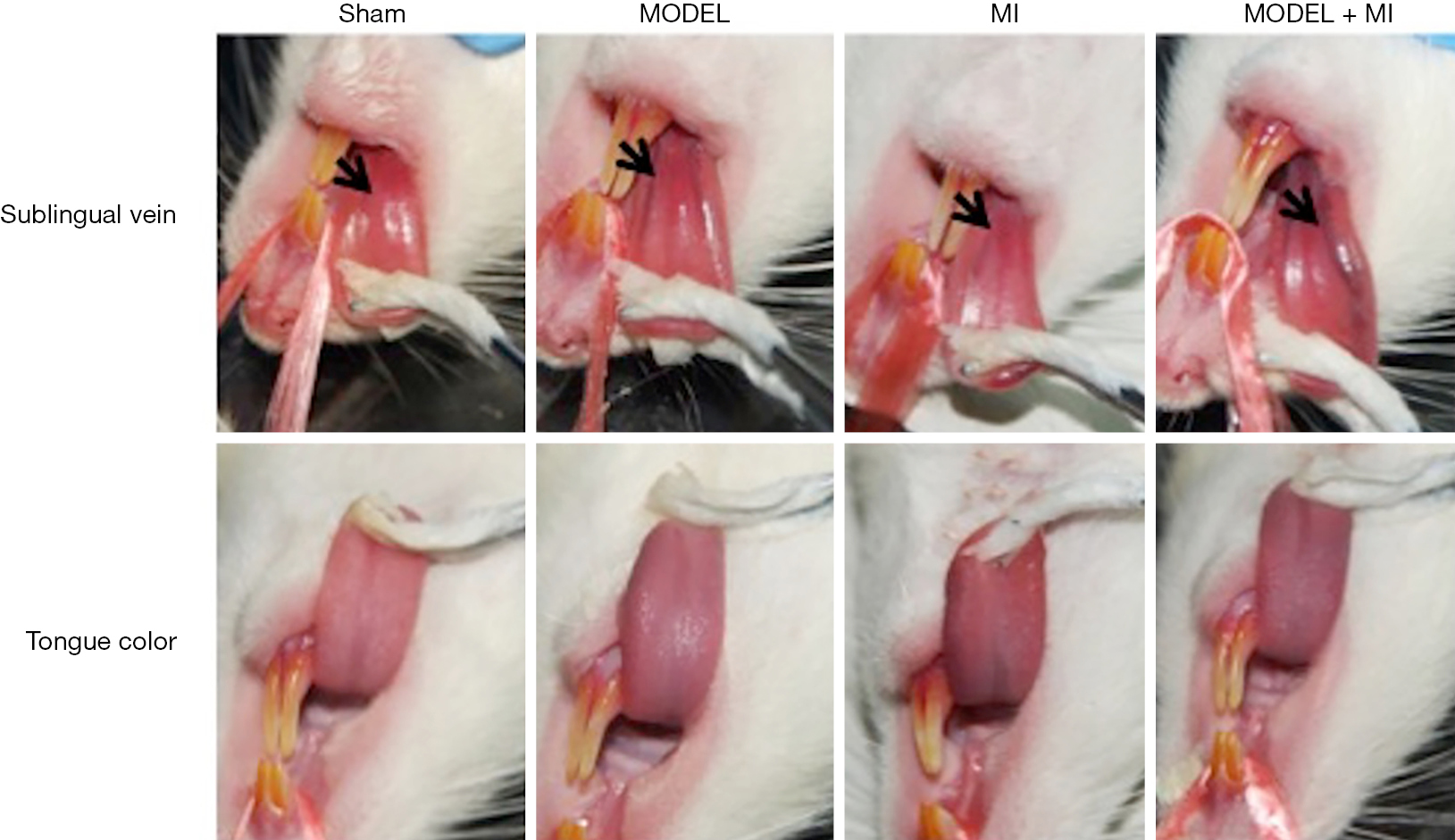 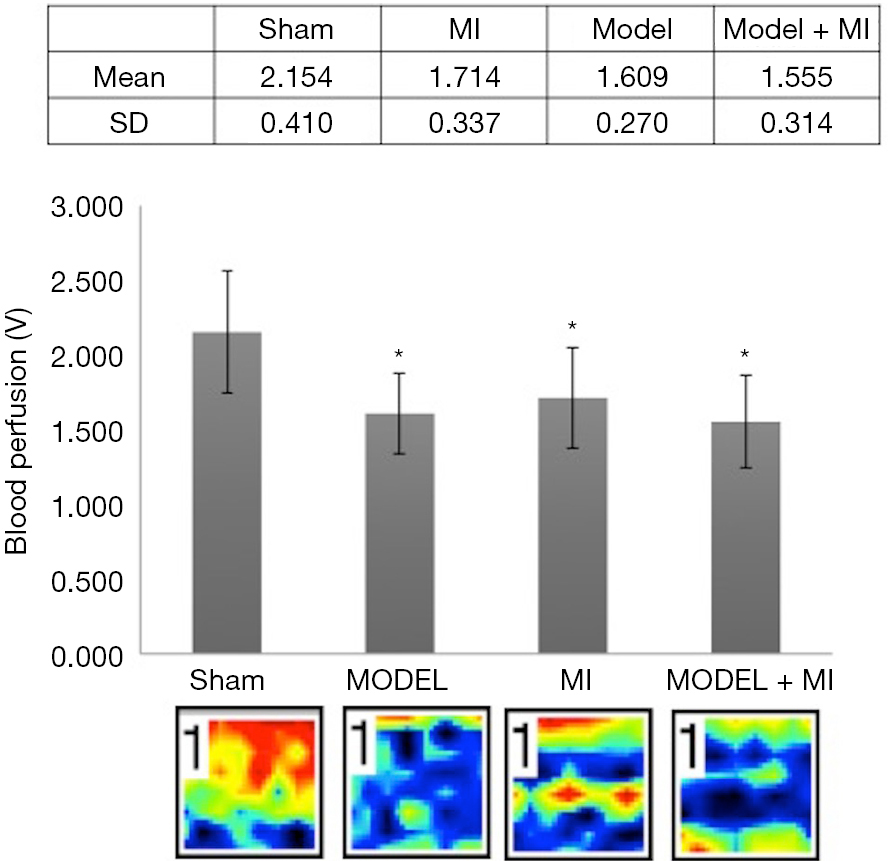 Content of serum cTnT, Hcy, and activity of LDH 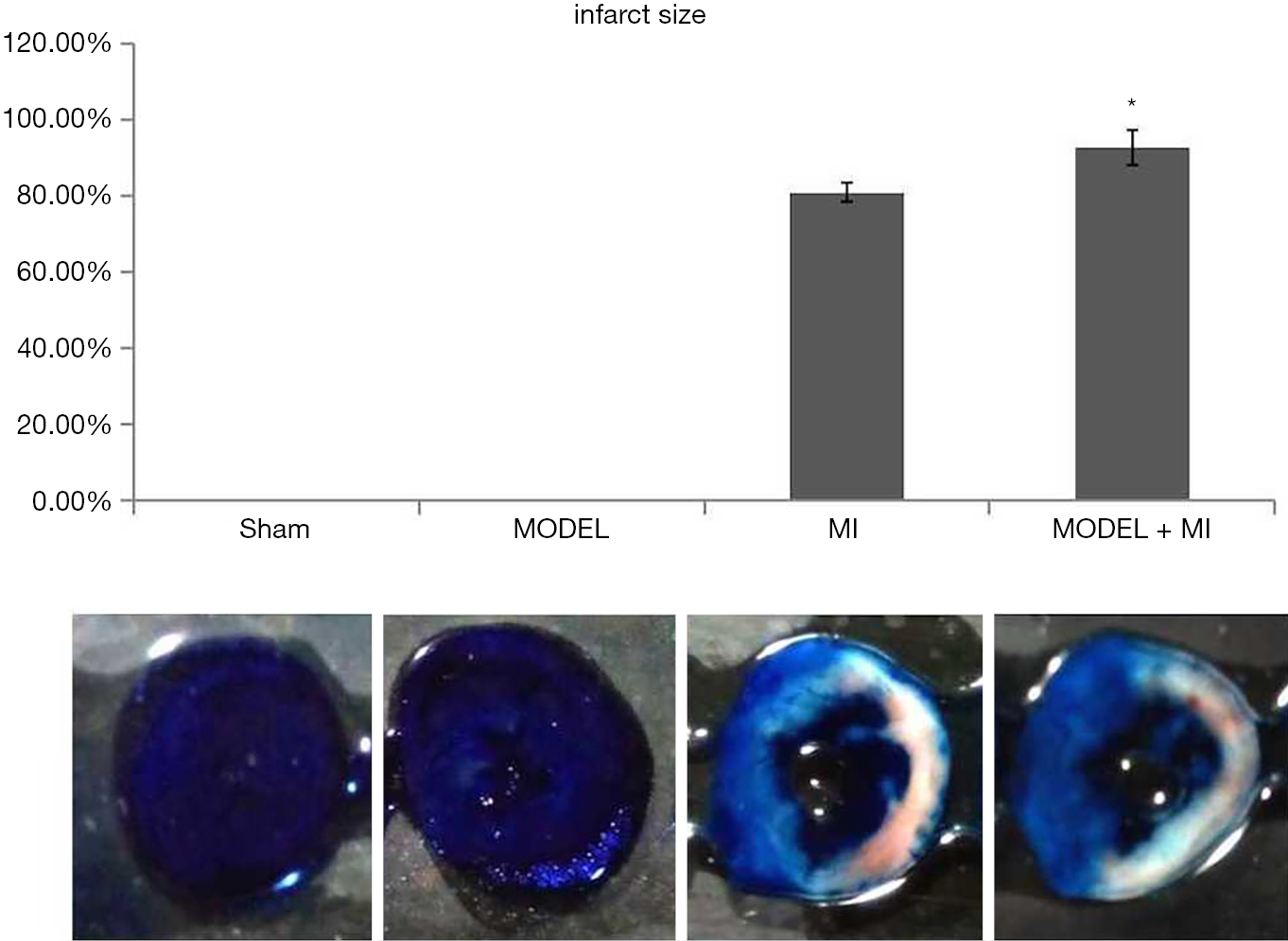 Patients typically silently suffer from psychological stress-induced myocardial ischemia. Typically, it occurs at a lower workload than exercise-induced ischemia and is known to be associated with adverse cardiovascular outcomes, like cardiovascular death and MI. In the laboratory, psychological stress can aggravate ischemia that can be diagnosed as reversible left ventricular dysfunction, transient electrocardiographic abnormalities, or perfusion defects under nuclear imaging (27,28).

In conclusion, this study was the first to successfully establish a rat model in myocardial ischemia with psychological stress for the first time. However, there are still some limitations to this model, such as anxiety evaluation. We should extend the restriction time of our model in a future study, so that we can observe more severe pathological stress changes.

Ethical Statement: The authors are accountable for all aspects of the work in ensuring that questions related to the accuracy or integrity of any part of the work are appropriately investigated and resolved. The protocol was approved by the Institutional Animal Care and Use Committee of the Chinese PLA General Hospital (No. 2018-085).