IgA nephropathy (IgAN) is the most common type of primary glomerulonephritis worldwide (1). Approximately 30% of patients eventually develop end-stage renal disease (ESRD) within 20–30 years after renal biopsy (1,2). Unfortunately, IgAN diagnosis is based on kidney biopsy, and there is no approved IgAN progression diagnostic blood biomarker. Biopsy specimens that meet IgAN diagnostic criteria have a wide range of pathological changes that are often reflected in IgAN patients with variable clinical prognosis. Given the invasive nature, there is urgent need for clinical practice for non-invasive biomarkers associated with IgAN prognosis.

Another common pathological characteristic associated with IgAN is renal interstitial inflammatory infiltration. Previous studies have reported several inflammatory cell infiltration with prognostic significance in chronic kidney diseases (3-5). Our team also demonstrated that the accumulation of interstitial CD4+ T cells, CD8+ T cells, CD20+ B cells, CD68+ macrophage or dendritic cells, were correlated with decreased renal function and poor renal outcomes (6,7). The migration of leukocytes depends on a variety of adhesion molecules and chemokines (8). Interestingly, the chemokine CXC motif-ligand 16 (CXCL16) was found to play an important role in the development of inflammatory diseases (9).

CXCL16 is a chemokine belonging to the CXC chemokine family (10), which acts as a classical chemoattractant for CXCR6-expressing cells, including CD8+ T cells, CD4+ T cells, NK cells, invariant NKT cells, plasma cells, and monocytes (11-13). CXCL16 serves as an important pathogenic mediator in inflammatory diseases (9,14,15). Several polymorphic variants of CXCL16 were associated with the risk of various diseases, including coronary artery disease (16) and inflammatory bowel disease (17).

In addition, in recent studies CXCL16 has been reported to be associated with renal diseases. Serum and urinary CXCL16 was higher in lupus nephritis, particularly in periods of disease activity (15). In diabetic kidney disease, plasma CXCL16 levels were found to be independently correlated with estimated glomerular filtration rate (eGFR) and serum albumin (18,19). In fact, blocking the activities of CXCL16 has been to shown to prevent the progression of anti-GBM glomerulonephritis even when the disorder is found (20). These findings suggest that CXCL16 may be a marker of renal disease. Whereas prolific data have been published on clinical data, little is known about CXCL16’s associations with renal pathology and clinic outcomes. Larger cohort studies with a long follow-up period to evaluate the predictive value of the chemokine CXCL16 in renal inflammation and outcomes are needed.

The purpose of this study was to investigate plasma CXCL16 characteristics in patients with IgAN. We investigated plasma levels of CXCL16 at time of renal biopsy and analyzed its associations with clinical and pathological characteristics; the density of CD4+ T cells, CD8+ T cells, CD20+ B cells, and CD68+ macrophages; and renal CXCL16 expression and outcome by using a large IgAN cohort of Chinese patients.

In this study, all-adult (≥18 years) patients with biopsy-proven primary IgAN from January 2012 to January 2014 at Tongji Hospital of Huazhong University of Science and Technology were enrolled (n=230). The patients were followed up until April 2019 for an average of 41.3 months. Patients with Henoch-Schönlein purpura, lupus nephritis, rheumatoid arthritis, chronic liver disease, diabetes, Crohn's disease, cancers, cardiovascular diseases or whose renal biopsy specimen contained less than 8 glomeruli, were excluded from the study. The renal outcomes were the survival from a 50% reduction in eGFR or ESRD (eGFR <15 mL/min per 1.73 m2).

This study conformed to the Ethical Committee of Huazhong University of Science and Technology guidelines (No. TJ-IRB20181108). All procedures conducted in this study followed the institutional and/or national research committee’s ethical standards and the Helsinki Declaration of 1964 and its later amendments or comparable ethical standards. All participants included in the study gave informed consent.

CXCL16 levels were measured in plasma samples which were obtained from all IgAN patients on the day of renal biopsy by using a Quantikine CXCL16 (R&D Systems, Minneapolis, MN, USA) ELISA kit following the manufacturer’s instruction.

The statistical analyses were carried out using SPSS 23.0 software (SPSS, Chicago, IL, USA) and GraphPad Prism version 6 software (Graph software, San Diego, CA, USA). Correlations were evaluated using nonparametric Spearman’s and parametric Pearson’s correlation test. Multivariate logistic regression analysis was performed to identify the independent relationship between plasma CXCL16 levels and clinical parameters. We used Cox regression and Kaplan-Meier survival curves to analyze the association between plasma CXCL16 levels and renal outcome, and the significance was determined by the log-rank test. The optimal cut-off value for high and low expression for CXCL16 was obtained by ROC curve analysis. All of the statistical analyses were two-tailed. P<0.05 was considered statistically significant.

Correlations between CXCL16 levels and clinical parameters of the IgAN patients

Figure 1 The correlations between the plasma CXCL16 levels and Scr (A), eGFR (B), albumin (C), and 24-h urine protein (D) in univariate analysis.

Furthermore, with multivariate linear regression analysis of the 4 pathology variables and the clinical data set (age, gender, MAP and 24-h urine protein), we found that the plasma CXCL16 levels were still significantly correlated with the tubular atrophy/interstitial fibrosis score (P=0.023) and nearly correlated with the crescent proportion (P=0.070), whereas association with other pathological variables failed to reach independent statistical significance in the multivariate analysis model. The details of this analysis are listed in Table 3. These results demonstrate that renal pathology was correlated with plasma CXCL16 levels, especially tubular atrophy/interstitial fibrosis score. 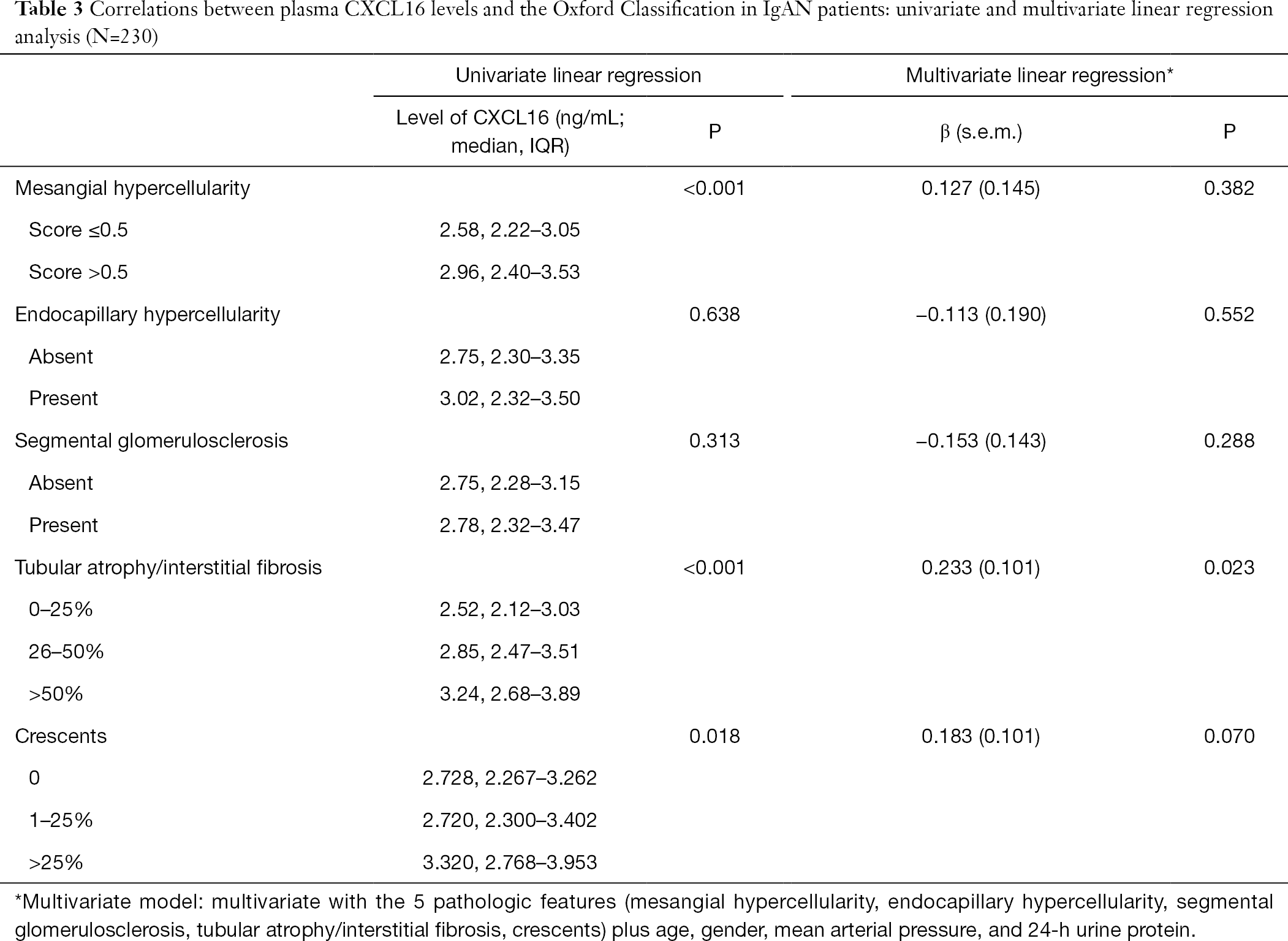 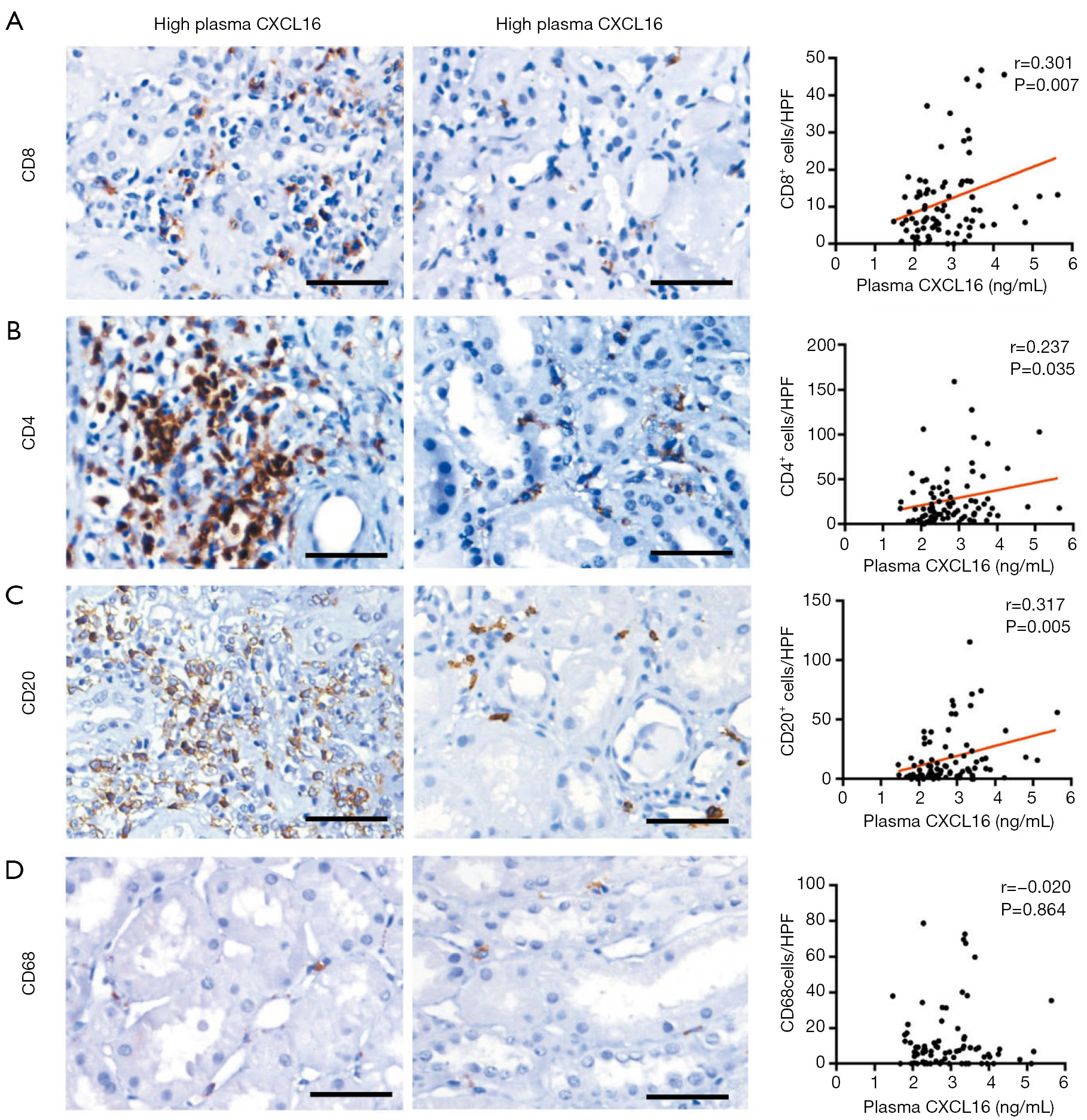 Correlations between CXCL16 levels and outcome

Seventeen events of the combined outcome (50% reduction in eGFR or ESRD) occurred in a mean follow-up period of 41.3 months from the renal biopsy. Patients were divided by plasma CXCL16, and a high level of CXCL16 was associated with a reduction in the combined renal survival rate (P=0.001) (Figure 4). In Cox regression analysis, a high level of plasma CXCL16 (HR, 1.873; 95% CI, 1.012–3.468, P=0.046) was an independent predictor for IgAN patients, along with age, gender, mean arterial pressure and 24h Urine protein (Table 4). Strikingly, these results suggest that plasma CXCL16 levels were correlated with the progression of IgAN patients and may serve as a noninvasive biomarker of renal disease. 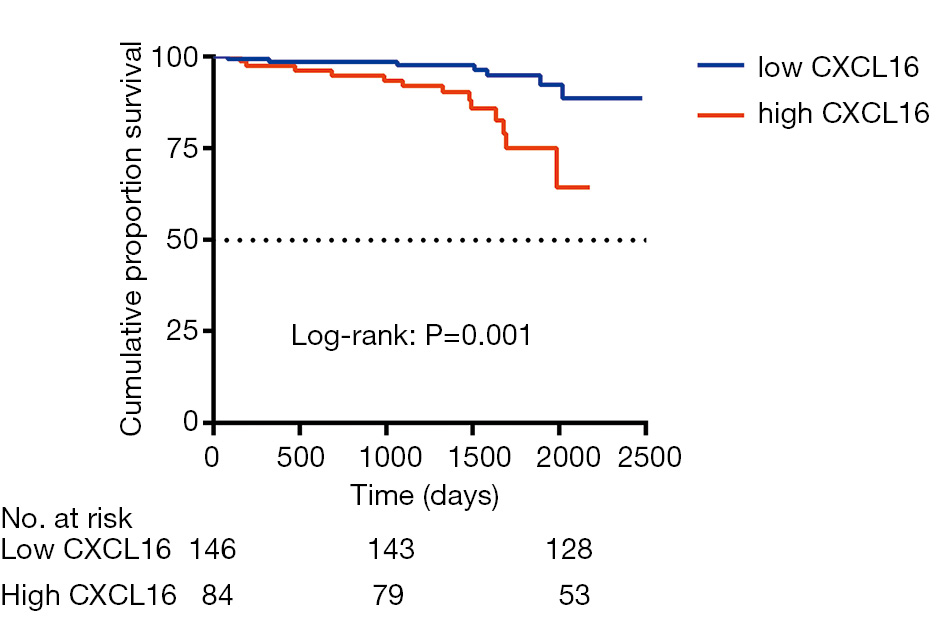 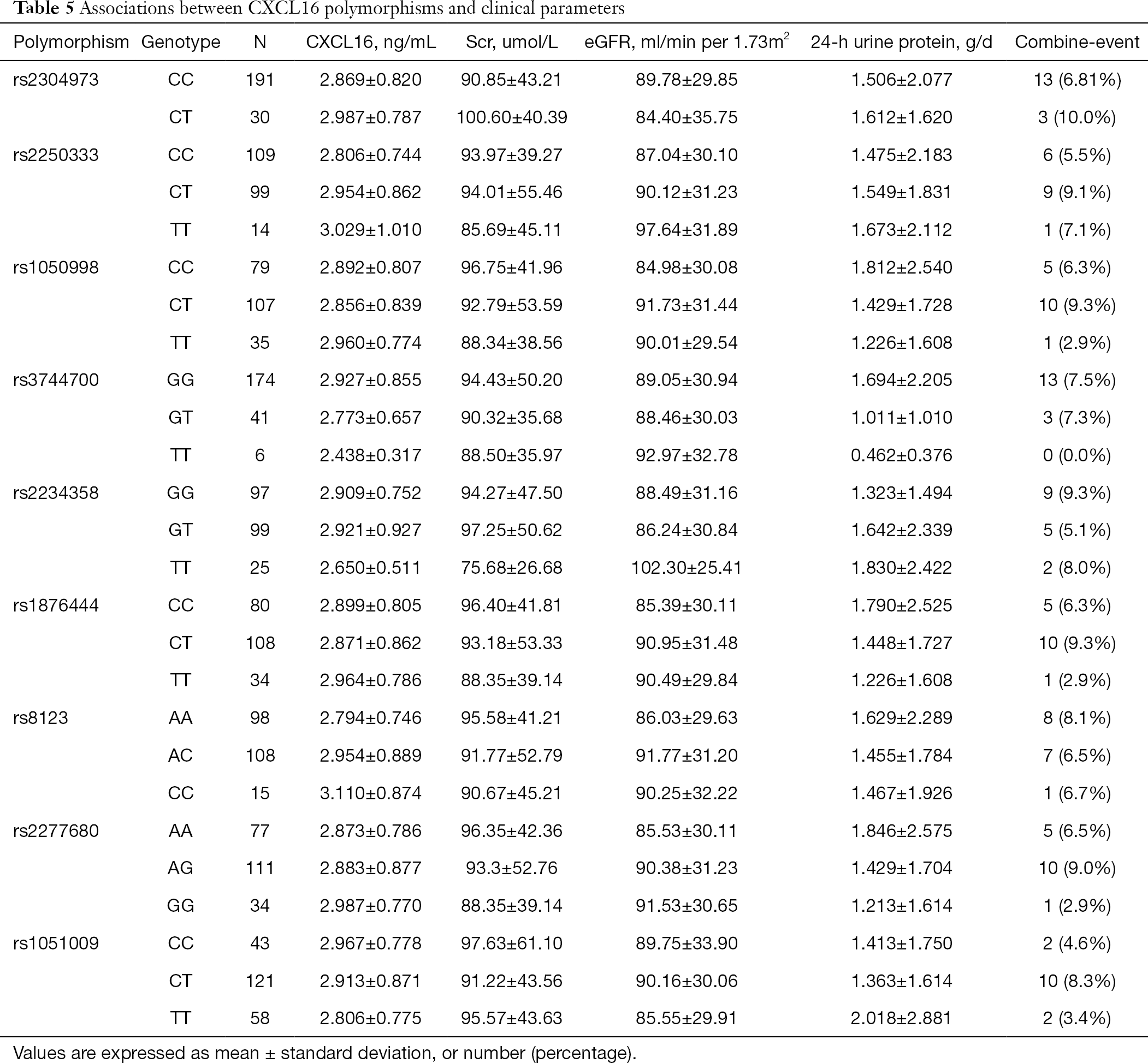 IgAN is the most widespread primary chronic glomerular disease worldwide. However, the requirement of a renal biopsy for diagnosis impedes a description of the full consequences of this disease (2). Several recent studies have suggested that chemokine is involved in the development and progression of kidney diseases (6). We here investigated the plasma level of chemokine CXCL16, using a well-defined single central IgA cohort. This study is the first prospective clinical study to assess the prognostic significance of plasma CXCL16 on renal survival in a of long-term follow-up of IgAN patients. It could serve as a useful laboratory test to detect IgAN renal function and prognosis in the future, which could limit the need for invasive renal biopsies in such a patient population.

In previous research, serum CXCL16 was correlated with clinical and pathological parameters in diseases, such as lupus nephritis (15) and diabetic kidney disease (18). Our study also showed that the levels of plasma CXCL16 in our IgAN patient population were associated with the markers of renal function eGFR, serum creatinine (Scr), uric acid (UA), and blood urea nitrogen (BUN) and 24-hour protein levels. In multivariate linear regression analysis, UA and eGFR remained independently associated with plasma CXCL16. Crucially different from earlier research, our study focused on the relationship between circulating CXCL16 and IgAN renal pathology. The study revealed that in univariate analysis plasma CXCL16 levels were higher in patients with mesangial hypercellularity, tubular atrophy/interstitial fibrosis or more renal crescent proportion.

Furthermore, there was still a significant association between the tubular atrophy/interstitial fibrosis and plasma CXCL16 levels even after adjustment for clinical predictor variables by multivariate analysis. The mesangial hypercellularity and tubular atrophy/interstitial fibrosis lesions of the Oxford Classification have been reported to independently predict poor survival in large validation studies (22). Indeed, Hu et al. found that inflammation-activated CXCL16 pathway contributes to tubulointerstitial injury in mouse diabetic nephropathy (23), which further confirmed our results. However, our results did not find plasma CXCL16 independently associated with mesangial hypercellularity in multivariate analysis, which may be affected by other factors. These results still demonstrated that plasma CXCL16 levels were positively associated with renal function and pathology.

Research has shown that the infiltration of inflammatory cells in renal tissue has prognostic significance in IgAN (7), but it has remained unclear whether plasma CXCL16 levels could reflect organ inflammation conditions. Our study analysis showed that plasma CXCL16 levels were significantly correlated with the infiltration of CD4+ T cells, CD8+ T cells and CD20+ B cells in the renal specimens, but not related to the infiltration of CD68+ macrophage cells in renal tissue. CXCR6 was mainly expressed in T cells (12). In vivo study demonstrated that CXCL16/CXCR6 takes part in T cell migration into the inflammation tissue (14,24). We are first to show that plasma CXCL16 could reflect renal inflammatory cell infiltration. These results were consistent with CXCL16-mediated T cells accumulated in patients with vitiligo and atherosclerosis (11,25).

Circulating CXCL16 levels have been associated with poor outcomes in various diseases, such as prostate cancer (26), cardiomyopathy (27), and acute ischemic stroke (28). Consistent with the above studies, we found that there was an independent effect of plasma CXCL16 levels on adverse outcomes during 41.3 months of follow-up. In addition, after adjusting for the confounding effects of age, gender, MAP, and 24-hour urine protein, the relationship of plasma CXCL16 and IgAN prognosis remained significant in multivariate Cox regression analysis. These results suggest that plasma CXCL16 levels might have a potent ability for renal outcome prognosis in IgAN.

The present study had several limitations that should be briefly acknowledged. First, the plasma CXCL16 levels were only assessed at baseline, and the variation in levels over time and treatment response should be further evaluated. Second, the sample size of the study was relatively small, and a prospective study is required to confirm the clinical utility of CXCL16 in IgAN patients further.

Ethical Statement: The authors are accountable for all aspects of the work in ensuring that questions related to the accuracy or integrity of any part of the work are appropriately investigated and resolved. All the patients gave informed consent to participate in this study, and the study protocol was approved by the Ethical Committee of Huazhong University of Science and Technology (No. TJ-IRB20181108). The study was conducted in adherence to the Declaration of Helsinki.