Currently, terlipressin is the first-line treatment option for the management of acute gastro-esophageal variceal bleeding and HRS (9,10). Terlipressin is a vasopressin analogue composed by a synthetic 12 amino acid peptide that acts through the V1 receptors leading to splanchnic vasoconstriction, arterial blood volume elevation, and portal pressure reduction. It also acts through the V2 receptors which can deactivate renal and systemic vasoconstriction systems, thereby ameliorating glomerular filtration rate (GFR) and improving renal perfusion and function (11). Evidence suggests that terlipressin can decrease creatinine (Cr) by increasing Cr clearance (12-22), GFR, and urine sodium concentration (23) in patients with HRS (24,25). However, until now, there is no evidence regarding effect of terlipressin on renal function in cirrhotic patients with AUGIB. Herein, we conducted a retrospective study to analyze the renal function changes during and after the treatment of AUGIB with terlipressin and to identify the factors associated with AKI development (26).

This was a retrospective study at the Department of Gastroenterology of the General Hospital of Northern Theater Command (formerly General Hospital of Shenyang Military Area) from January 2016 to June 2018. The primary objective of the study was to evaluate the renal function changes in patients treated with terlipressin. The secondary objectives were to identify the factors associated with reductions of Cr and cystatin C (CysC) values and those associated with development of AKI. The study protocol conformed to the Declaration of Helsinki and was approved by the Medical Ethical Committee of our hospital [No. k(2018)20]. All included patients were treated by an attending physician (Xingshun Qi). Inclusion criteria were: (I) patients admitted with liver cirrhosis and AUGIB; and (II) patients received terlipressin treatment. Exclusion criteria were: (I) lack of renal function results, such as Cr and CysC; and (II) renal parenchymal disease. Additionally, to further explore the role of terlipressin on renal function improvement, we established a control group of cirrhotic patients treated with somatostatin/octreotide for AUGIB during the same enrollment period.

Liver cirrhosis diagnosis was primarily based on the history of liver diseases, clinical presentations, laboratory tests, and imaging examinations (27,28). AUGIB was diagnosed as a development of haematemesis and/or melena within 5 days before our admission (29). Baseline Cr and CysC values were defined as the Cr and CysC values obtained before the use of terlipressin at our admission. AKI was diagnosed as an increase of Cr value ≥26.5 µmol/L within 48 hours after our admission (30,31). 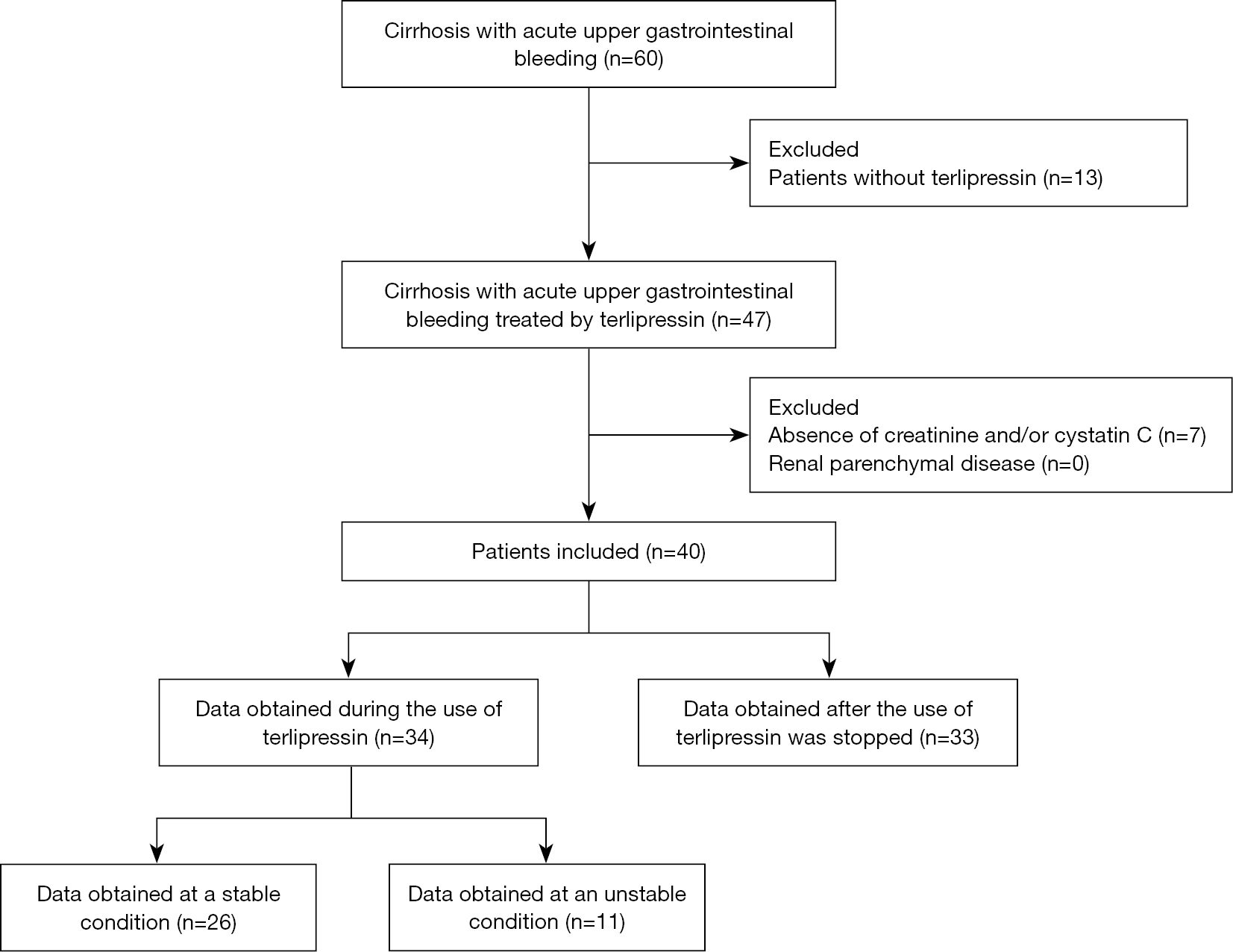 Figure 1 A flow chart of patient inclusion and exclusion. 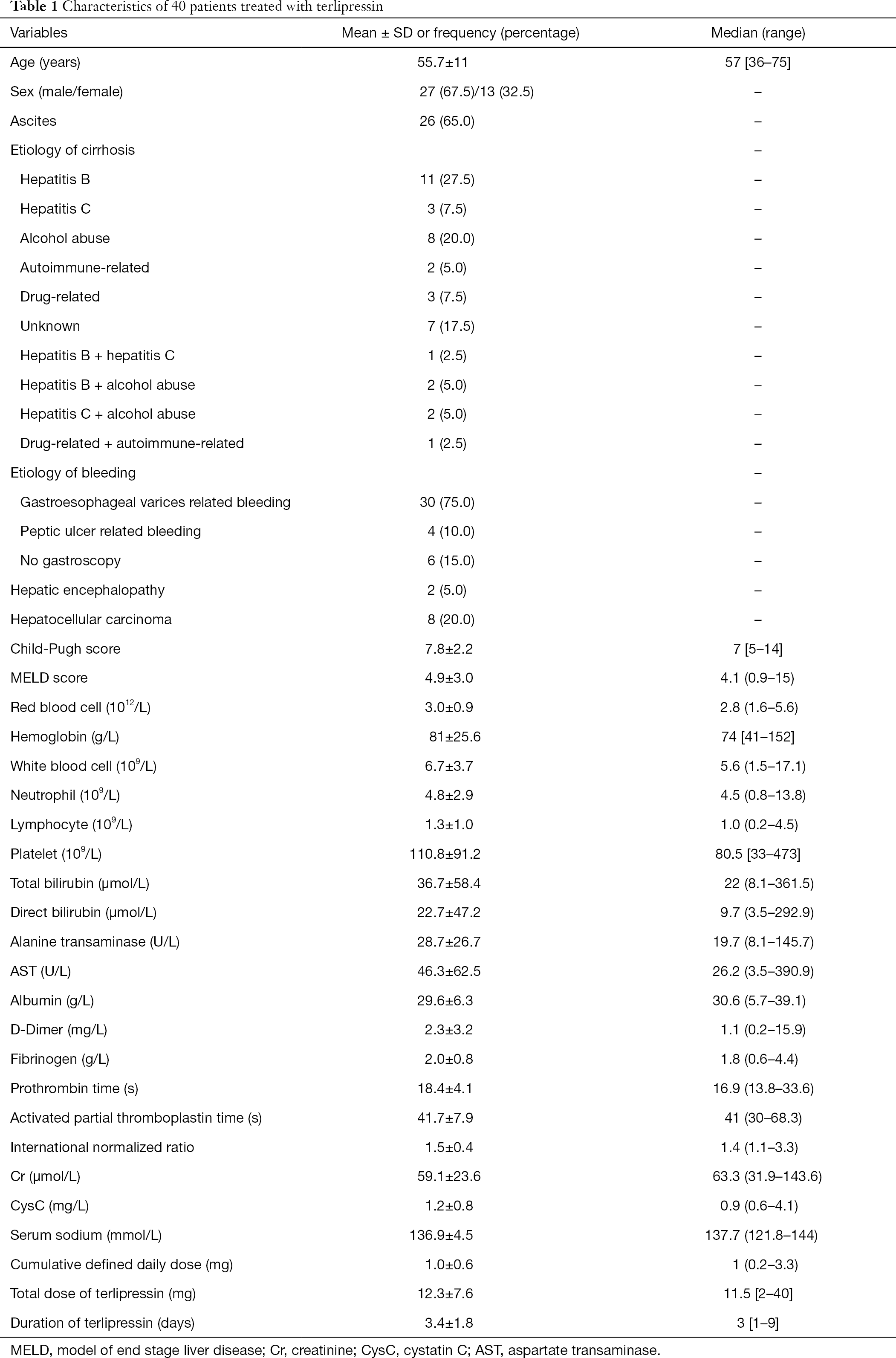 Change of CysC value during the use of terlipressin 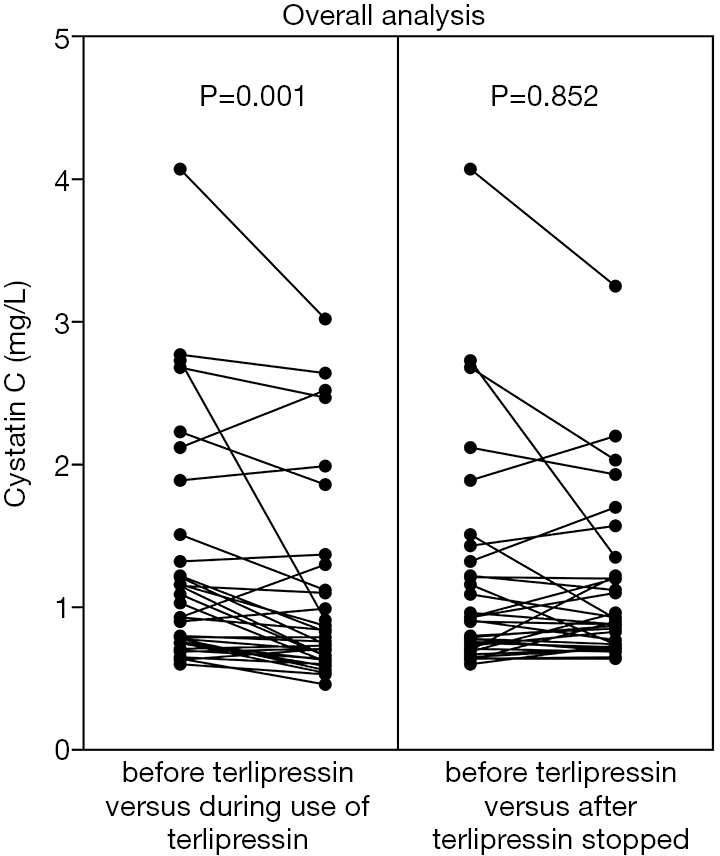 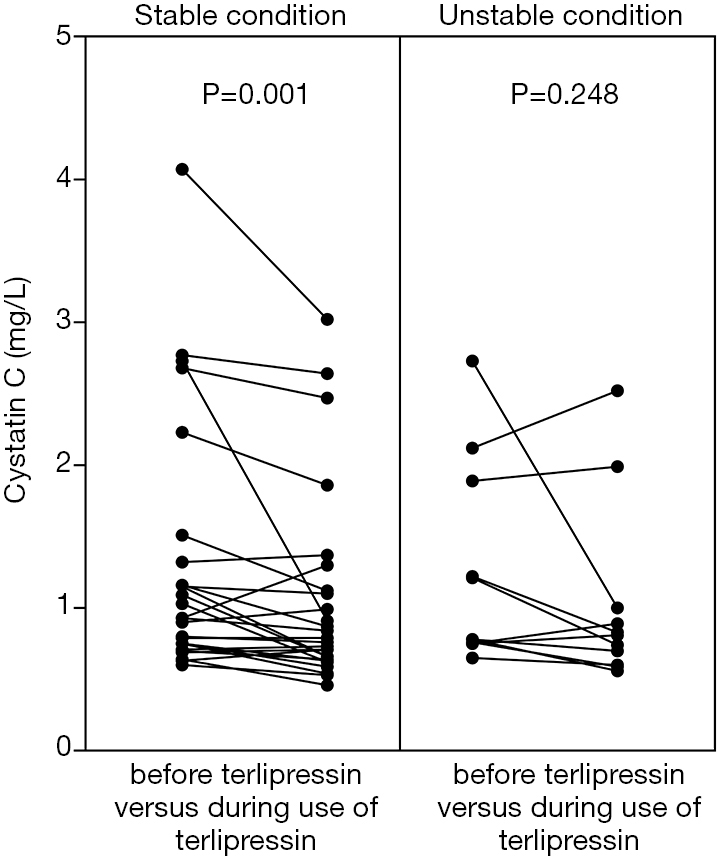 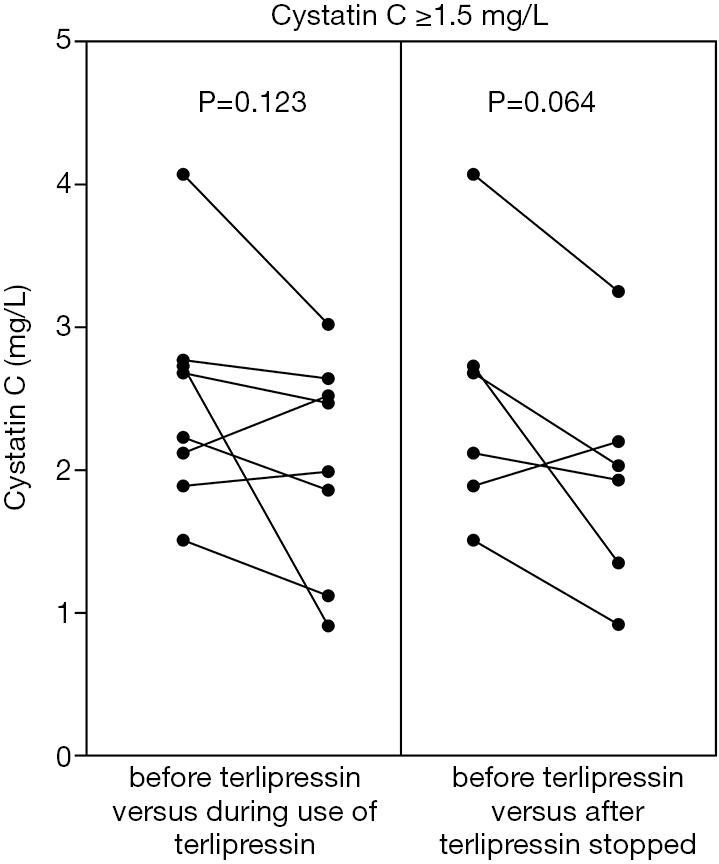 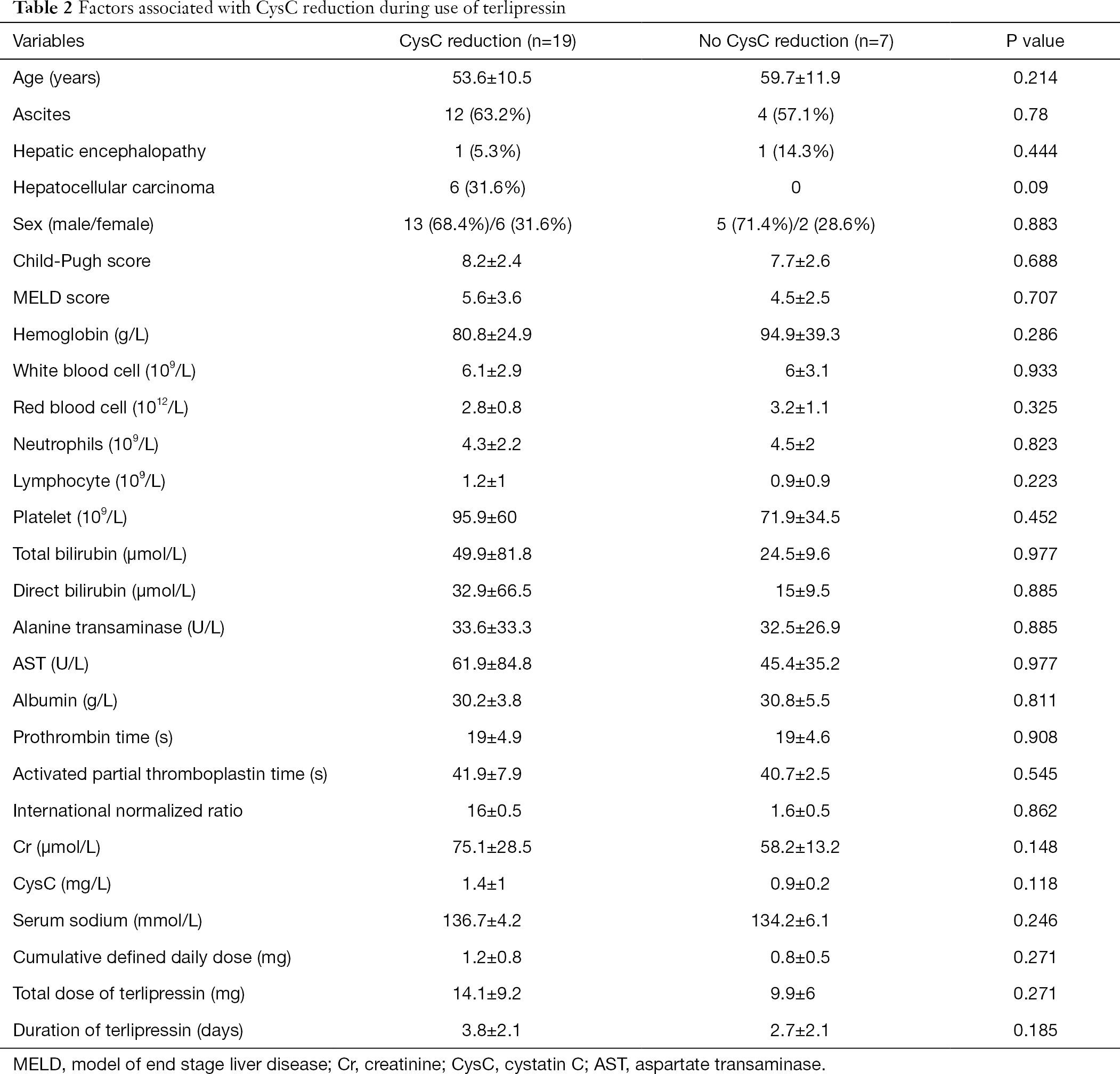 Change of Cr value during the use of terlipressin 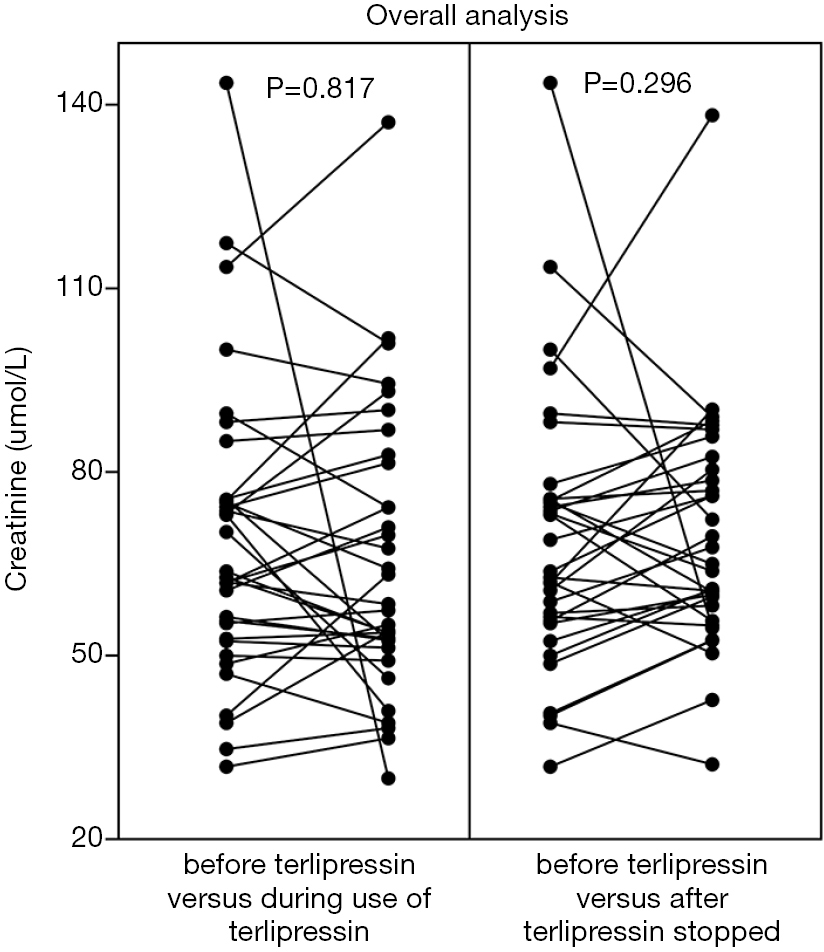 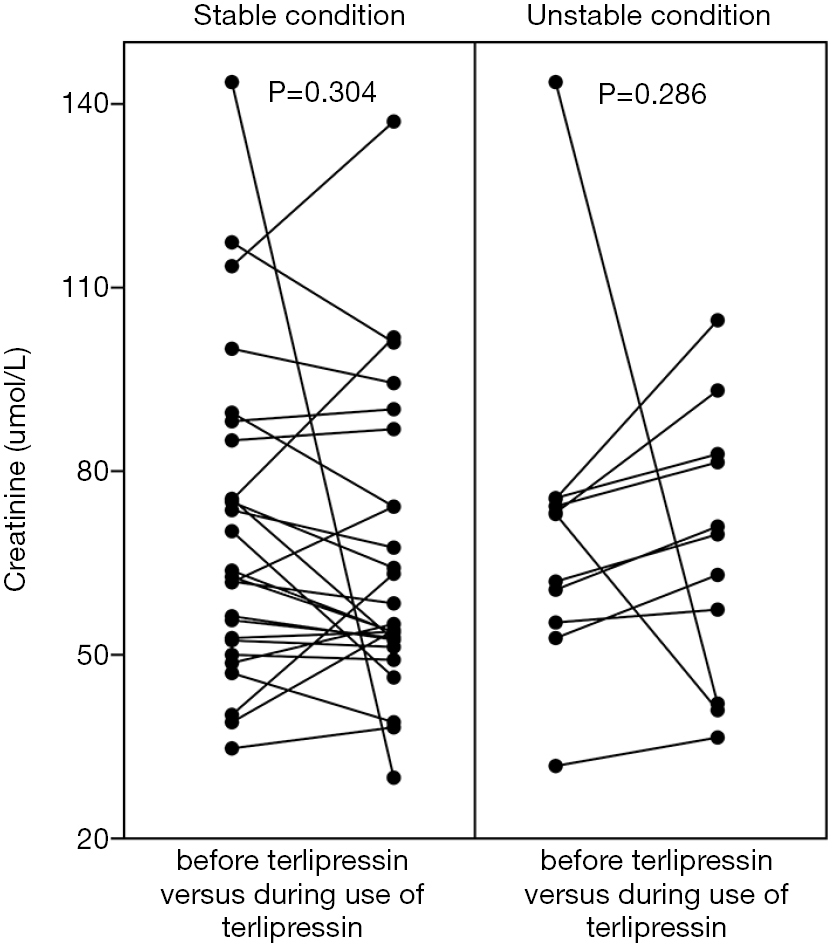 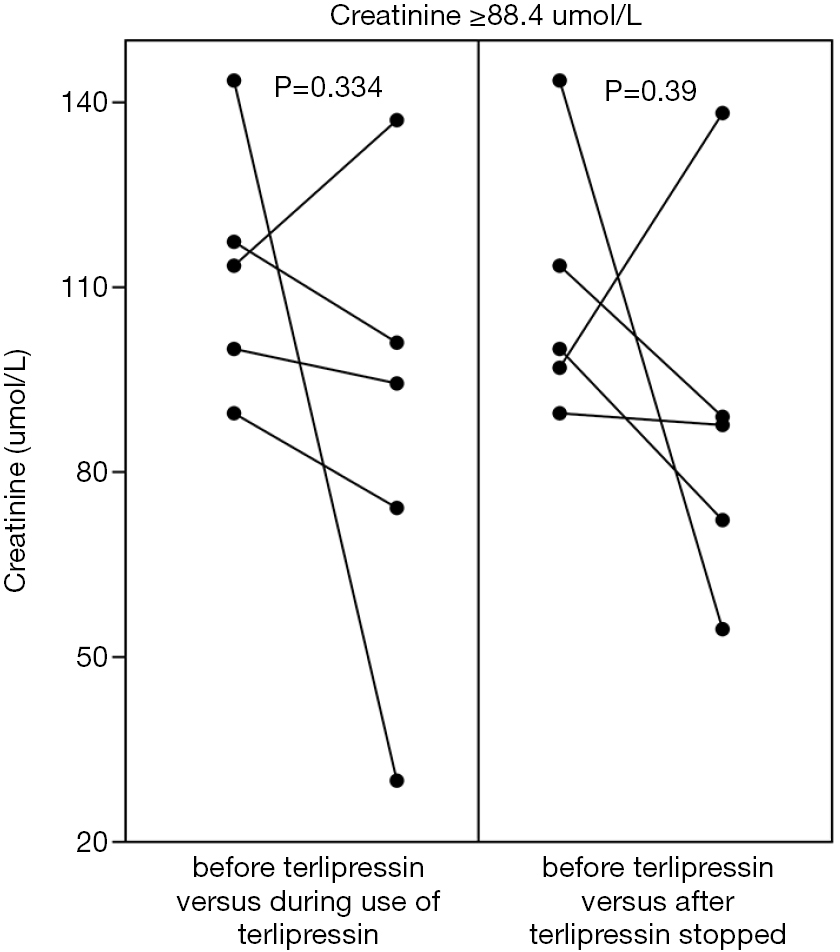 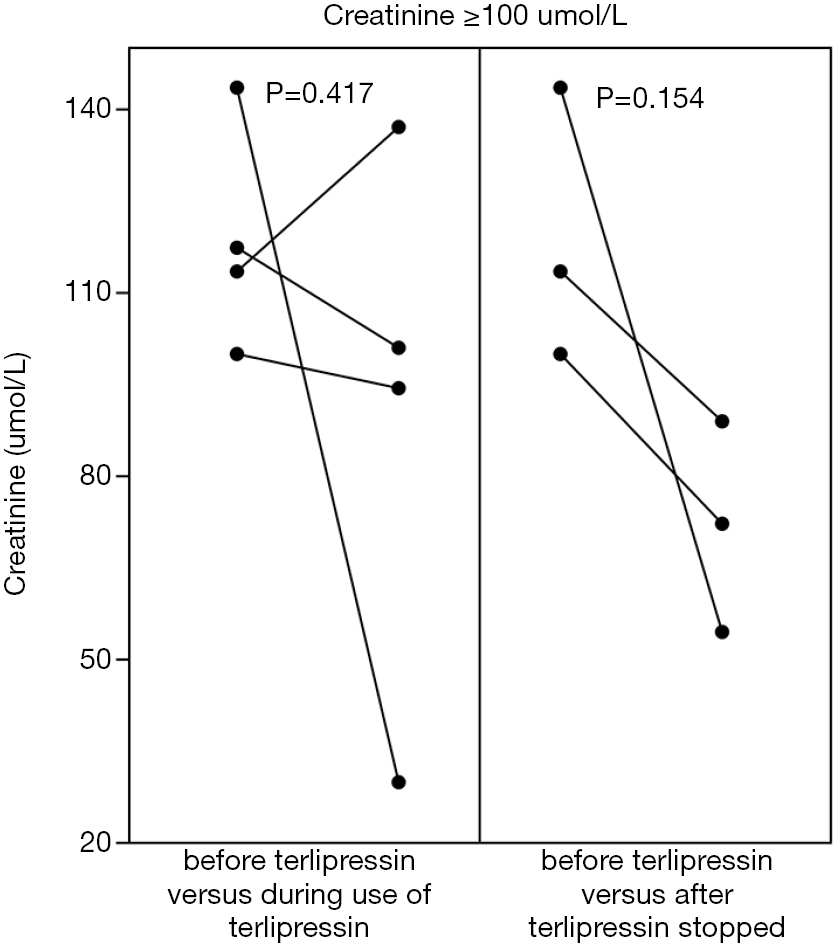 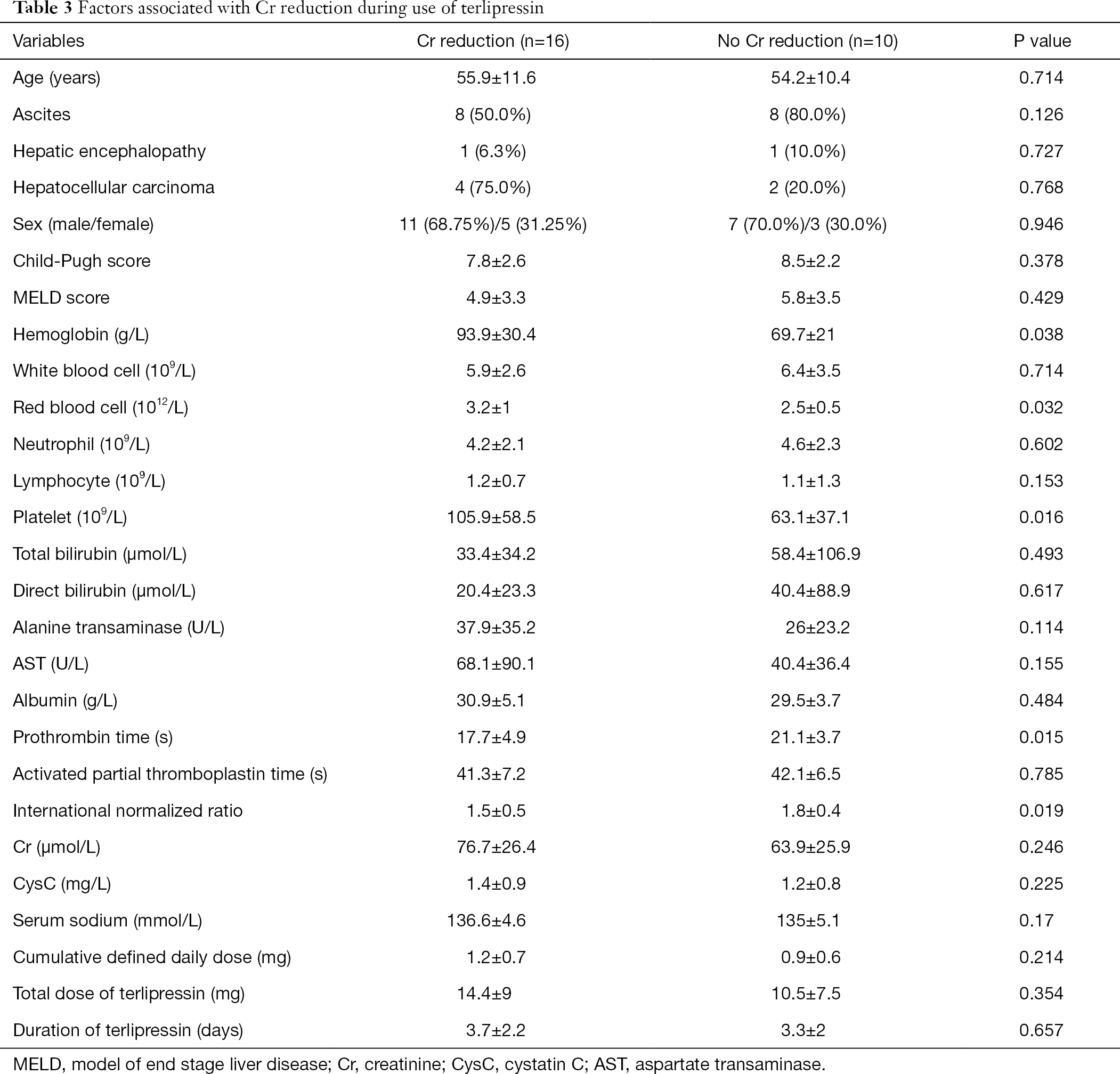 Change of CysC value after the use of terlipressin was stopped 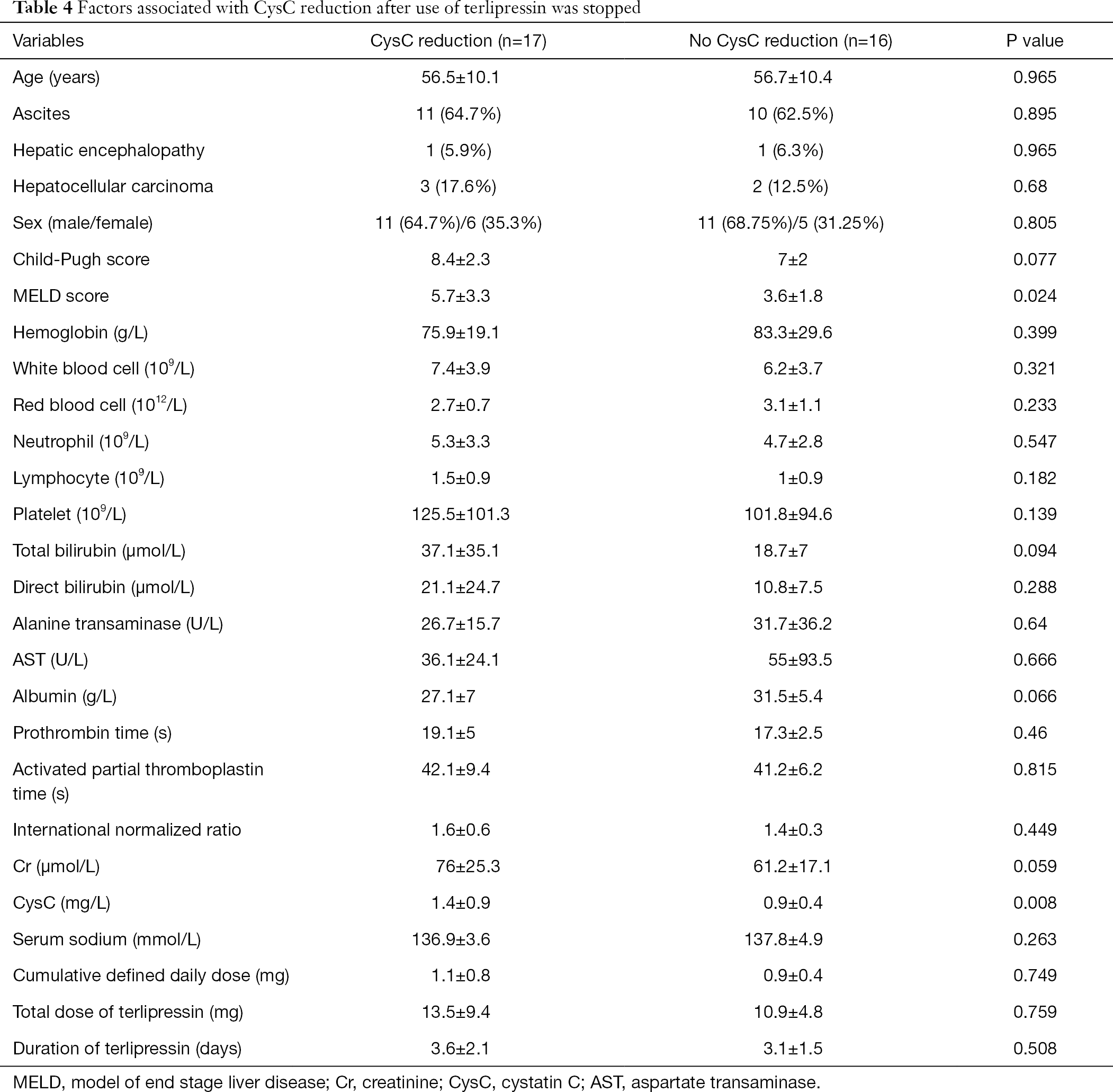 Change of Cr value after the use of terlipressin was stopped 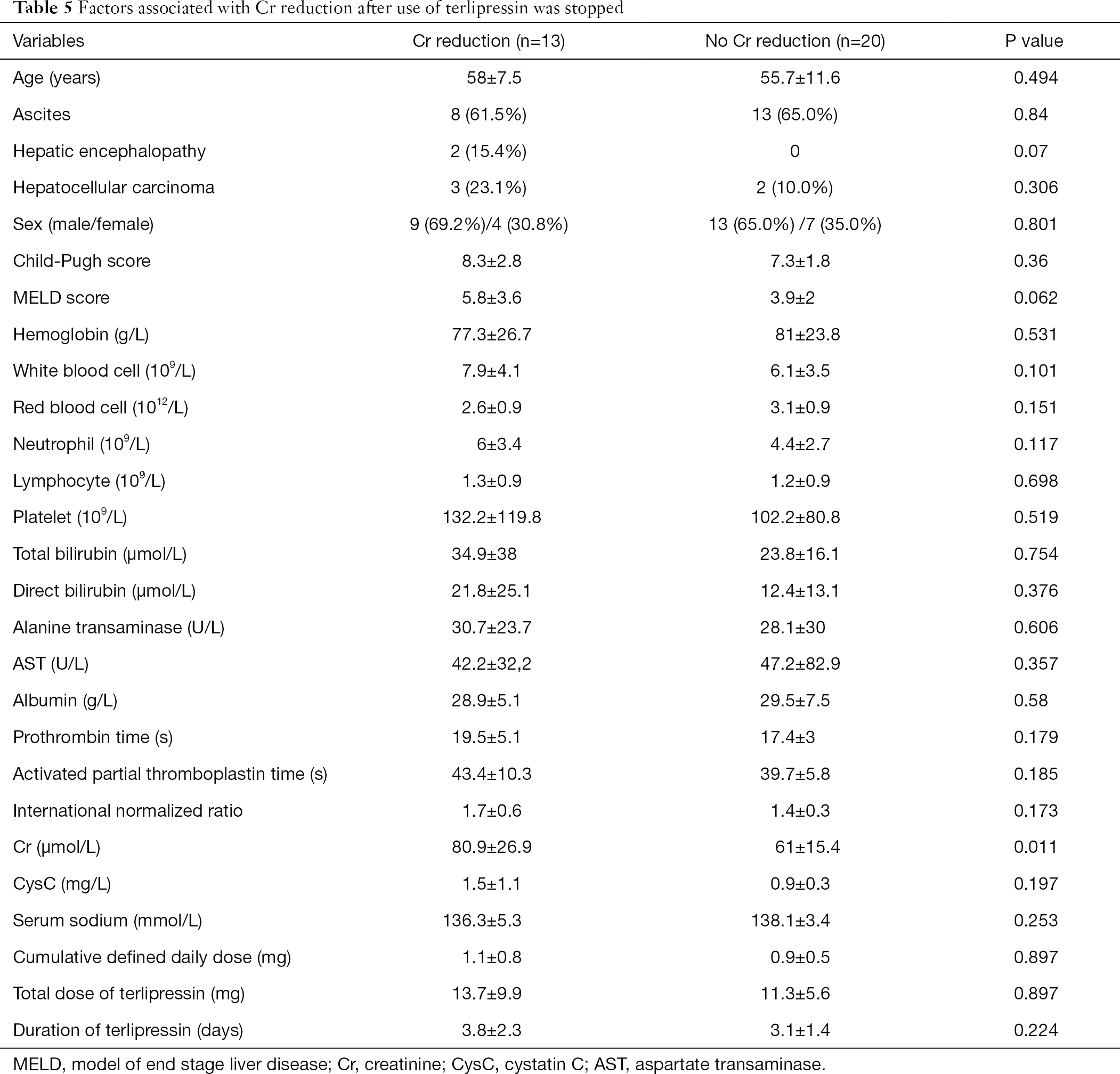 Factors associated with the development of AKI

Three patients developed AKI during hospitalization. After excluding patients with AKI at admission or a baseline Cr value ≥133 µmol/L (n=1), no factor at baseline was significantly associated with the development of AKI (Table 6). 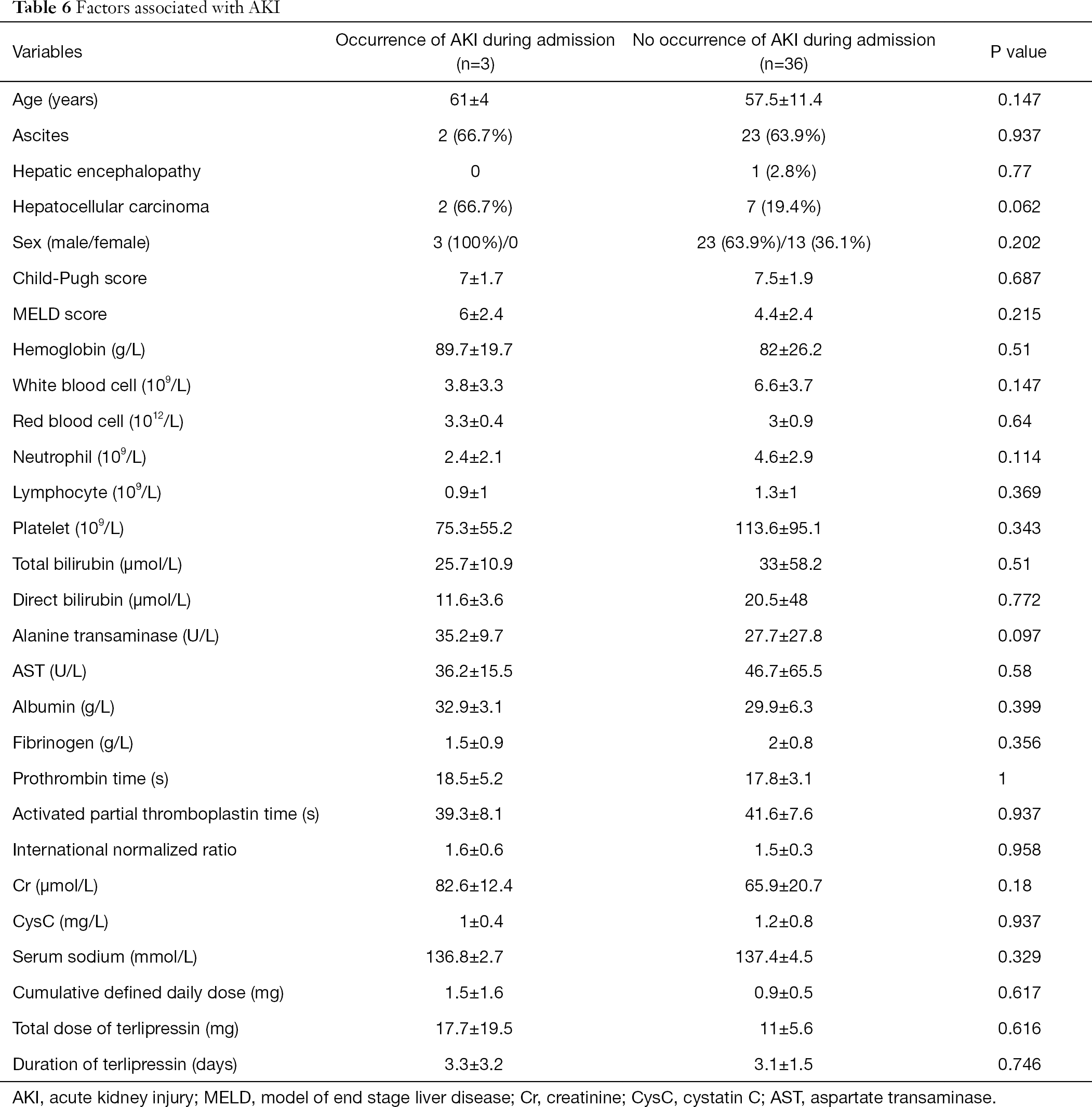 Why should we evaluate the outcomes of patients with normal Cr at baseline?

Why has CysC, rather than Cr, been significantly improved?

Cr is a popular laboratory index for evaluating renal function and an important component of MELD score for selecting the optimal liver transplantation candidate, but has many limitations (36). First, serum bilirubin had an impact on the Cr level. An increase of bilirubin level will lead to an underestimation of Cr level. Second, the muscle wasting and low protein intake resulted in a decreased synthesis of Cr. Third, ascites and peripheral edema may result in the attenuation of Cr in the body. By comparison, current evidence suggests the superiority of CysC over Cr in assessing renal dysfunction and its associated outcomes. First, five studies evaluated the role of CysC-based equation for estimating GFR in patients with cirrhosis and suggested that CysC-based equation achieved a better performance in estimation of GFR than Cr-based equation (26,37-40). Second, two studies evaluated the role of CysC for predicting the risk of HRS. One study found that CysC was the most significant predictor for HRS in cirrhotic patients with ascites and normal Cr level (41). Another study also found that baseline CysC was predictive of renal dysfunction and HRS in patients with acute decompensated cirrhosis (42). Third, four studies evaluated the role of CysC for diagnosing AKI in patients with cirrhosis. All of them found that CysC was a useful marker and predictor for diagnosing AKI (43-46). Lastly, three studies evaluated the role of CysC for predicting the mortality of cirrhotic patients with AKI. All of them suggested that CysC was superior to Cr or MELD score for predicting the mortality after AKI (45-47). Based on the literature review mentioned above and our findings that terlipressin could significantly improve the CysC value, we suggested the potential benefit of terlipressin for improving renal function in cirrhotic patients with AUGIB.

As shown in previous studies (6,48-50) (Table 7), risk factors of renal failure in AUGIB patients included worse hepatic and renal function, such as higher bilirubin, AST, and Cr, lower albumin, and Child-Pugh class C. The existence of comorbidity, such as shock, bacterial infection, oliguria, hypertension, chronic heart failure, malignancy, coronary artery disease, and chronic kidney disease, was also a risk factor of renal failure in AUGIB patients. Unfortunately, our study did not identify any factor that was significantly associated with the development of AKI. This unexpected finding should be attributed to a small sample size (the number of included patients was only 40) and a few events of AKI (the number of patients with AKI was only 3). 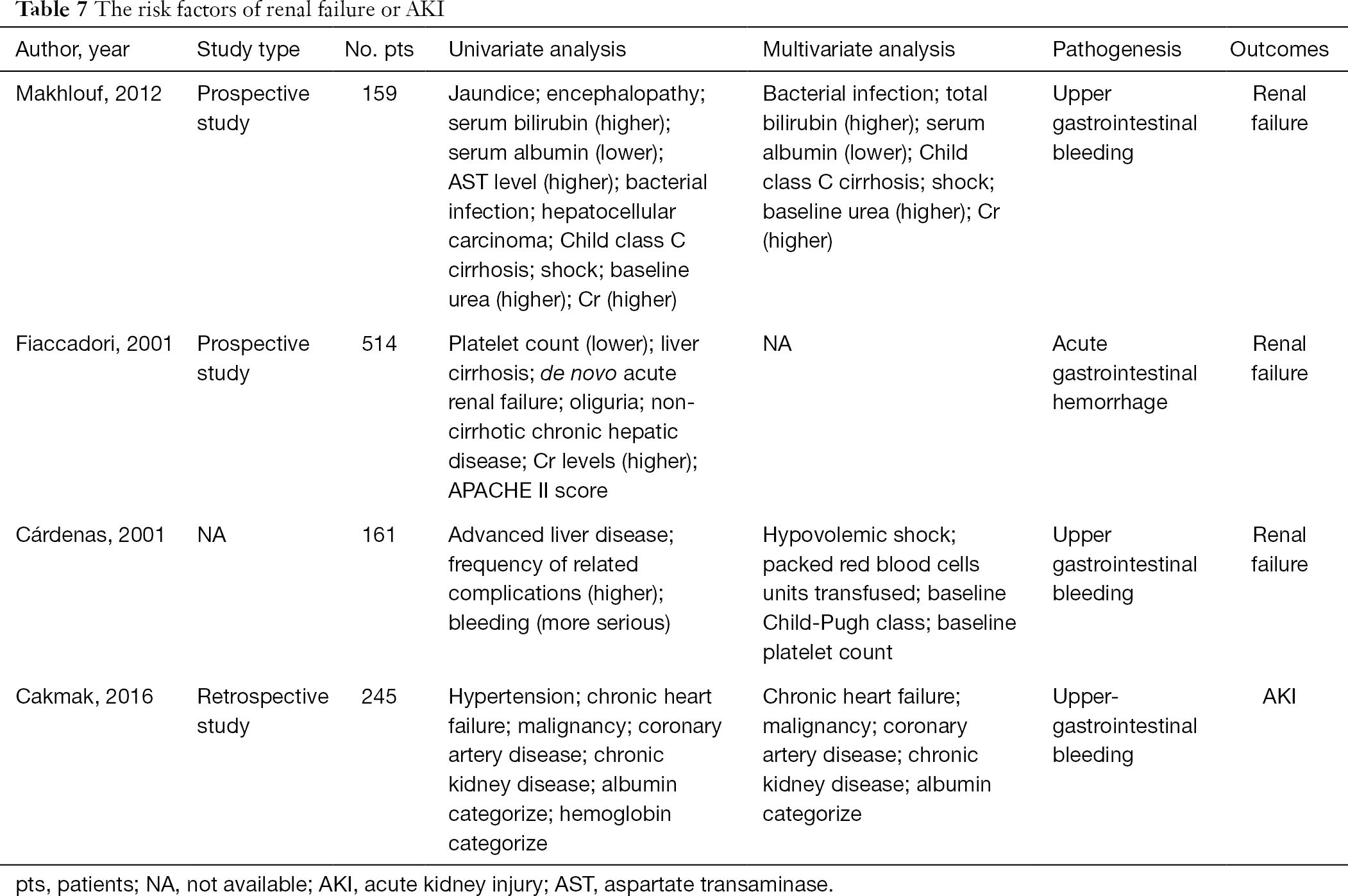 First, the main limitation of our study is a relatively small sample size which would affect the accuracy and stability of our findings. Second, we did not evaluate Cr clearance, urine sodium concentration, and GFR. Third, there is a risk of patient selection bias due to the retrospective nature of this study.

This work was partially presented as a poster presentation at the Asian Pacific Association for the Study of Liver (APASL) Single Topic Conference 2018 held in Beijing on December 6, 2018.

Conflicts of Interest: The authors have no conflict of interest to declare.

Ethical Statement: The authors are accountable for all aspects of the work in ensuring that questions related to the accuracy or integrity of any part of the work are appropriately investigated and resolved. The study protocol conformed to the Declaration of Helsinki and was approved by the Medical Ethical Committee of our hospital [No. k(2018)20].