The tumor microenvironment (TME) exerts an immunosuppressive effect and plays critical roles in tumor growth, angiogenesis, and metastasis (1). The lack of anti-tumor immune response caused by an immunosuppressive TME is associated with the refractoriness of treatment for glioblastomas (GBs) (2). The vascular endothelial growth factor (VEGF) is induced by hypoxia through a hypoxia-inducible factor 1 alpha (HIF-1α)-depending pathway, which contributes to immune suppression in the TME (3). Therefore, agents that target VEGF [bevacizumab (Bev)] or the VEGF receptor (VEGFR; sunitinib and sorafenib) are expected to induce not only anti-angiogenic effects, but also immunosupportive effects (4).

Therefore, in the present study, alterations in the molecules that are relevant to the TME were analyzed using paired pre- and post-RT and TMZ specimens from 15 patients with malignant glioma who did not receive Bev therapy, to confirm the differential actions between Bev and Stupp protocol.

This study was approved by the Institutional Review Board of our institutes (Reference number: 20050002 and 26-334). Written consent was obtained from all patients.

In the present study, we analyzed paired pre- and post-RT and TMZ specimens from 15 patients with malignant glioma (30 tumor tissues) (Figure 1A). All tissue specimens were obtained by surgical operation at Keio University School of Medicine and Jikei University Kashiwa Hospital, Japan between January 2009 and December 2018. The analyses were performed at Keio University School of Medicine. The present results were compared with those of our previous studies regarding Bev administration (5,7,8) (Figure 1B). 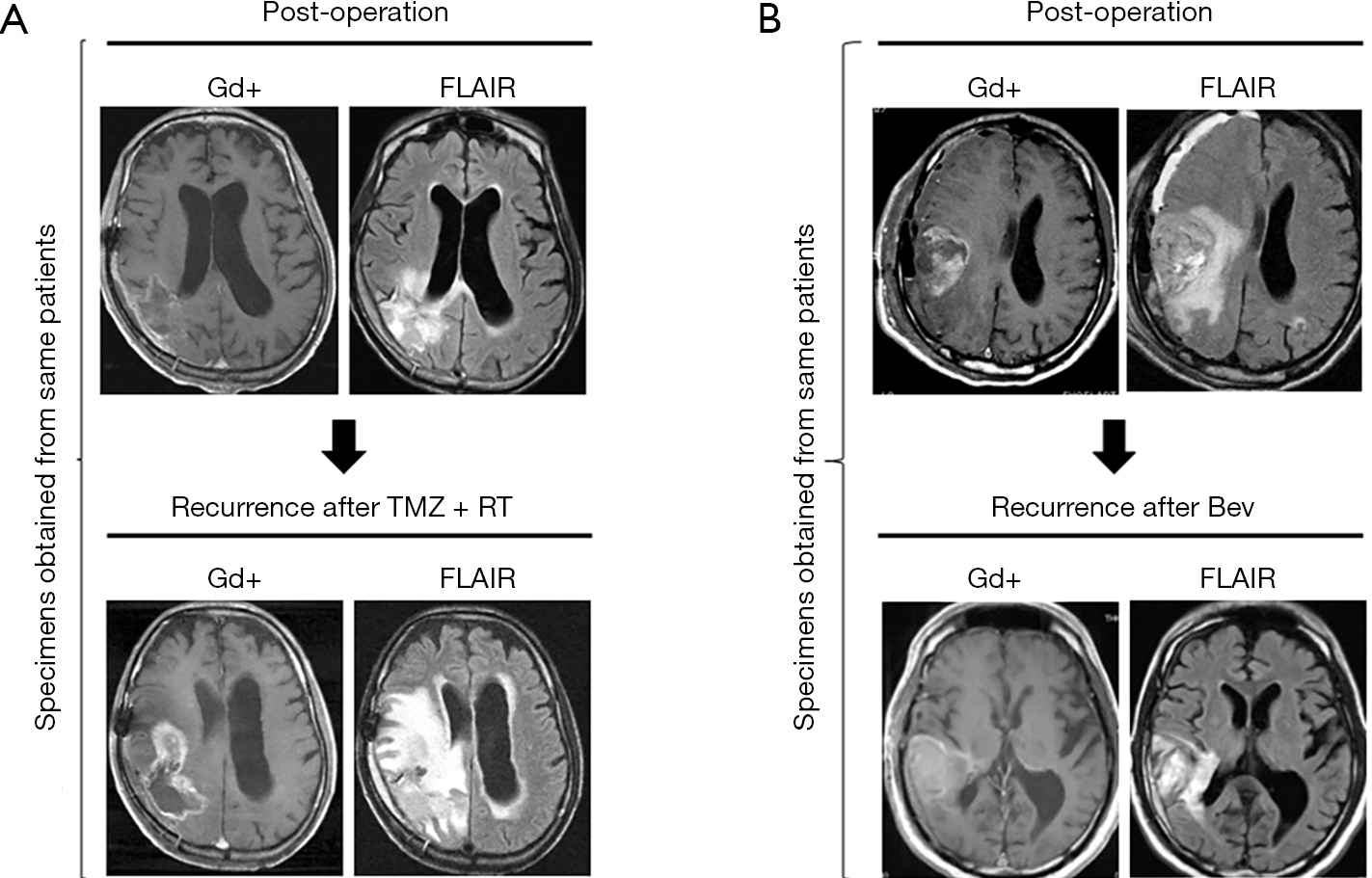 Figure 1 Design of the present study. In the present study, alterations in molecules that are relevant to the TME are analyzed using paired pre- and post-RT and TMZ specimens from 15 patients with malignant glioma (A). These results are compared with previously reported results using paired pre- and post-Bev therapy (B). T1-weighted images with contrast enhancement and FLAIR images acquired after operation and at the recurrent stage after the Stupp regimen (RT and TMZ) or Bev therapy are shown. Bev, bevacizumab; Gd+, T1-weighted images with contrast enhancement; FLAIR, FLuid-Attenuated Inversion Recovery; RT, radiotherapy; TMZ, temozolomide. 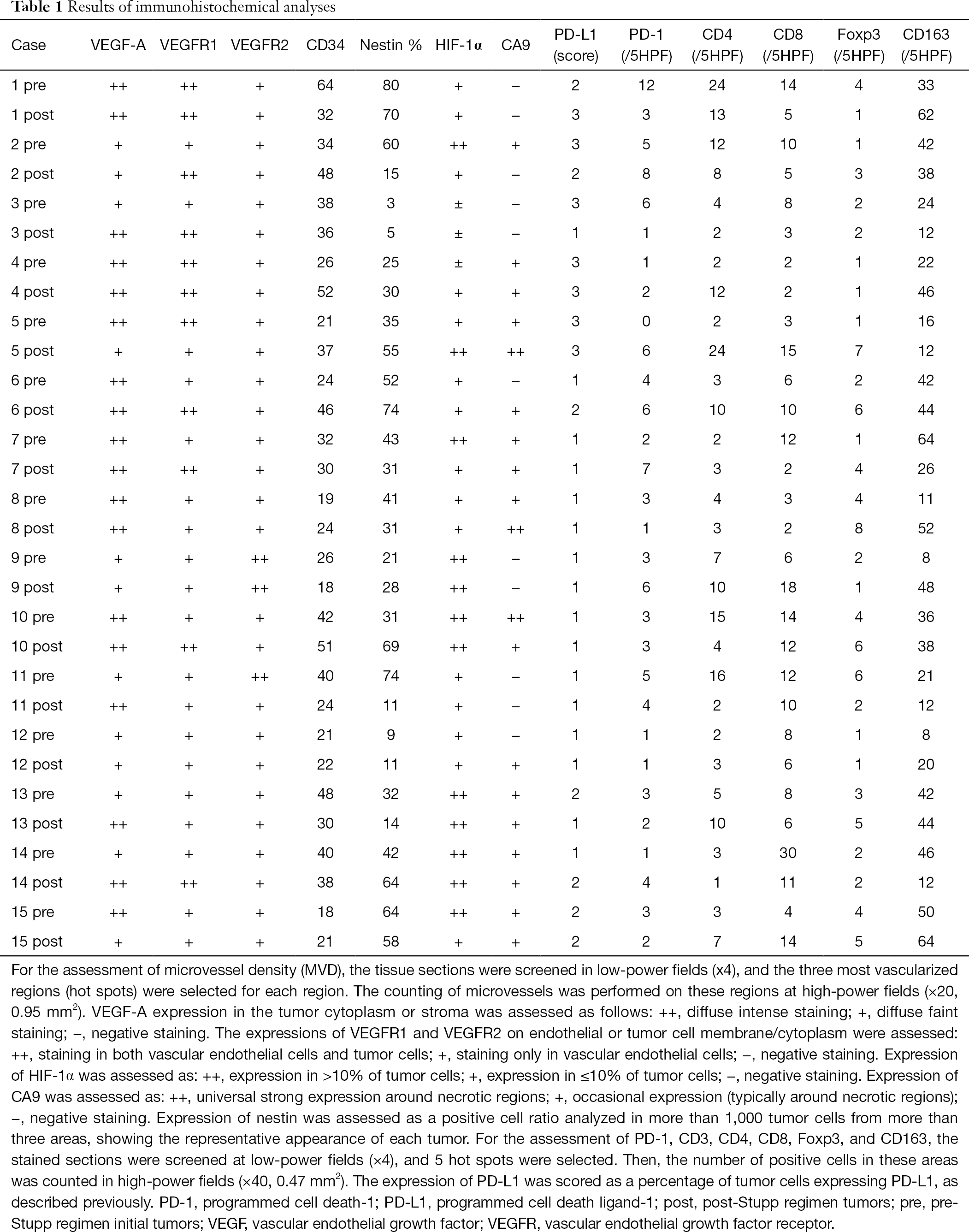 Paired t-test was used for the paired comparison of the markers described above (CD34, nestin, CD4, CD8, Foxp3, CD163, and PD-1). Chi-squared test was applied to compare the scores of VEGF-A, VEGFR1/R2, HIF-1α, CA9 and PD-L1 expressions. Student’s t-test was used for the comparison of percent change in markers from baseline in the patients who received ≥10 courses of TMZ vs. those who did not. All statistical analyses were performed using IBM SPSS statistics. P value less than 0.05 was considered to be statistically significant.

The general information of the patients, as well as their location and histology results, are summarized in Table 2. Fourteen cases were wild type for isocitrate dehydrogenase (IDH)1-R132H, whereas O6-methylguanine DNA methyltransferase (MGMT) promoter methylation was observed in 8 cases. The median number of courses of TMZ was five (mean, 6.6 courses). The median overall survival was 603 days (72–1,142 days) (Table 2). 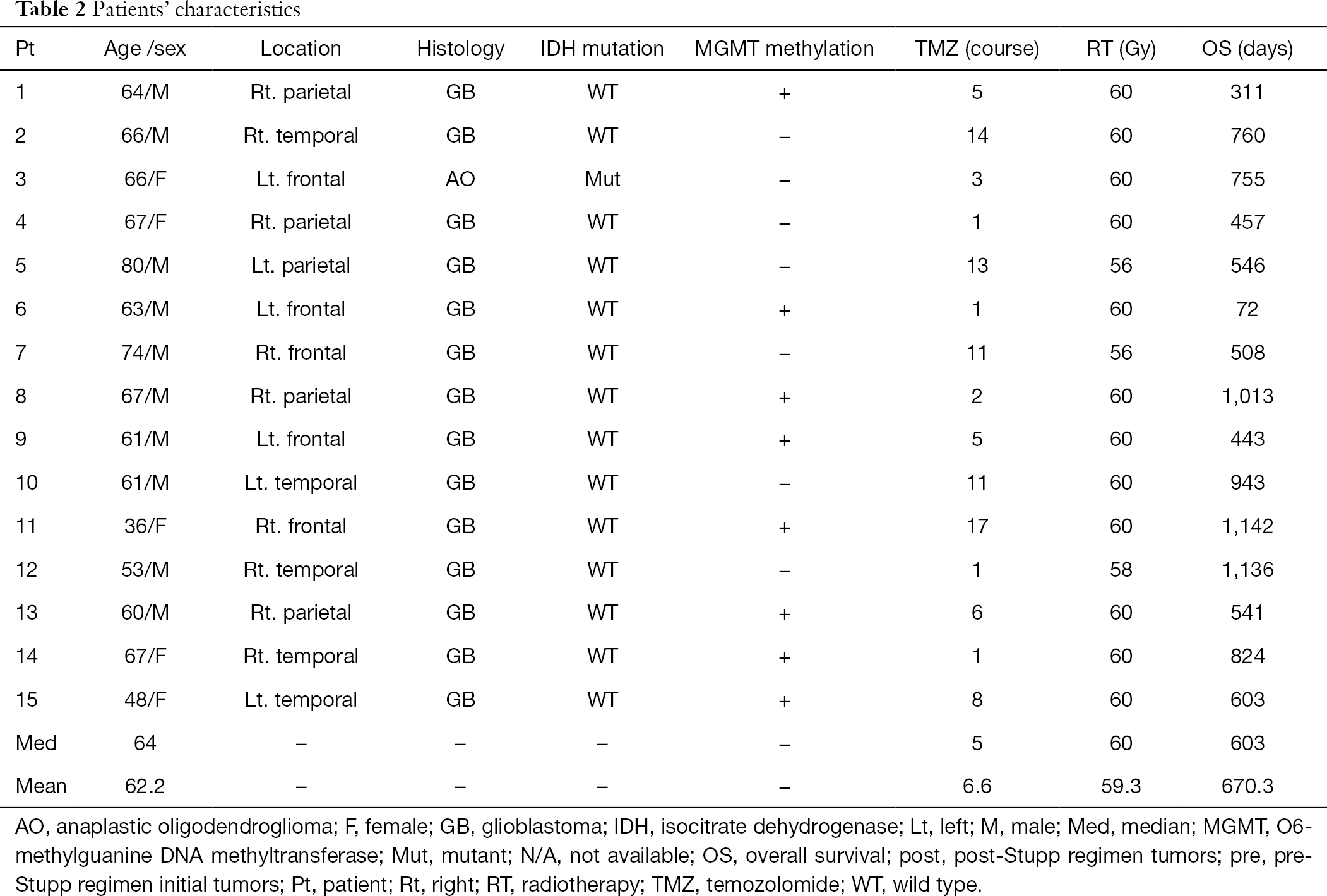 The recurrent tumors following RT and TMZ showed proliferation of astrocytes with nuclear anaplasia, and the form of tumor cells was essentially similar to that of the previous surgery (data not shown). Palisading necrosis and microvascular proliferation were also observed. Microvessel density (MVD) was not decreased in the tumors after RT and TMZ compared with that before the treatment (pre, 32.9±12.76/5HPF; post, 33.9±11.29/5HPF, P=0.41) (Figure 2A,B) (Table 1). 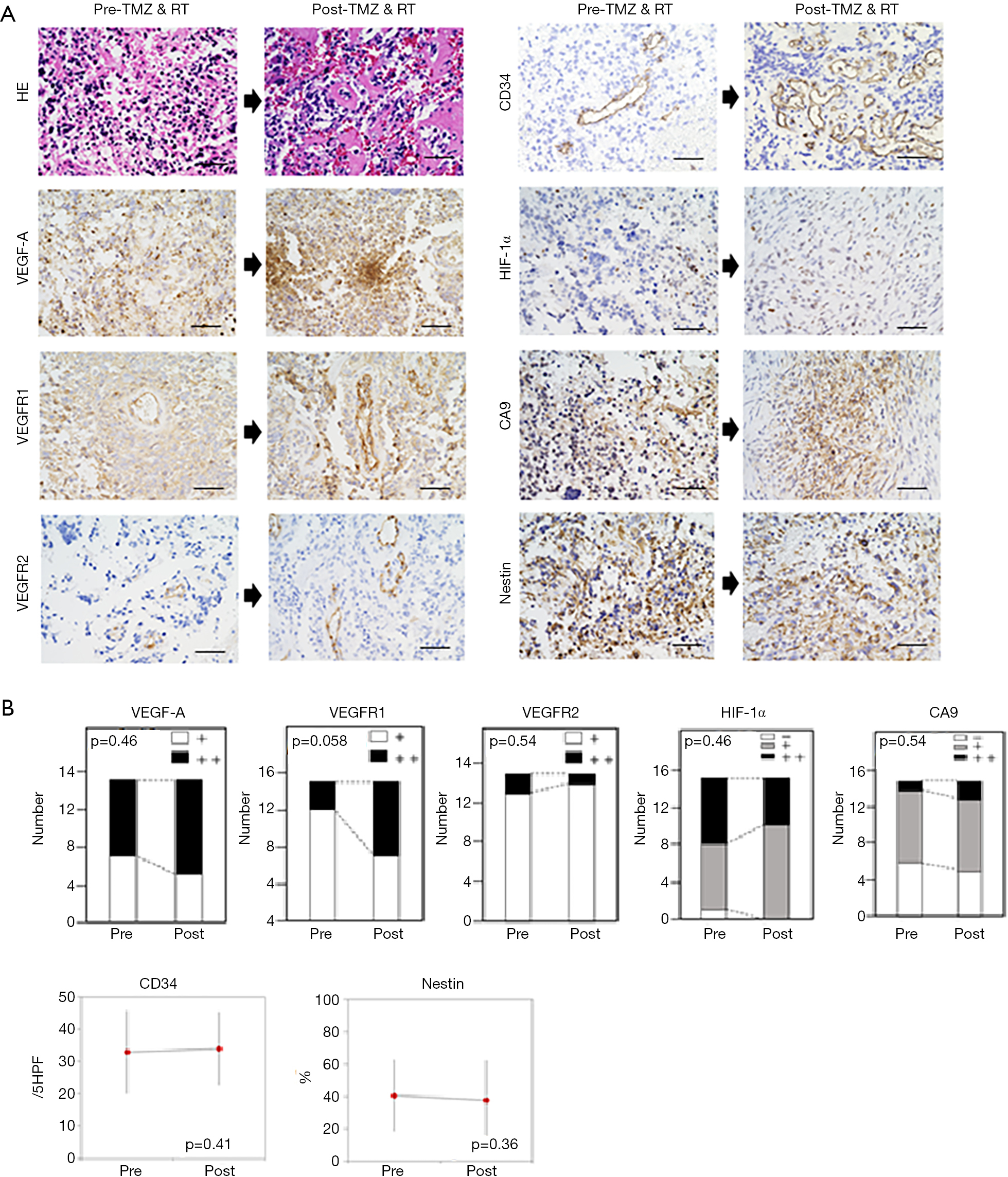 Figure 2 Results of immunohistochemical analyses of angiogenesis, hypoxia, and stemness. Photomicrographs (A) and the results of statistical analyses (B) are shown. Immunohistochemical analyses demonstrate that the expression levels of VEGF-A/VEGFR2, CD34, HIF-1α, CA9 and nestin are not significantly changed after RT and TMZ therapy. The VEGFR1 expression tends to be upregulated after the treatment. Original magnification, ×40; scale bar, 100 µm. RT, radiotherapy; TMZ, temozolomide. 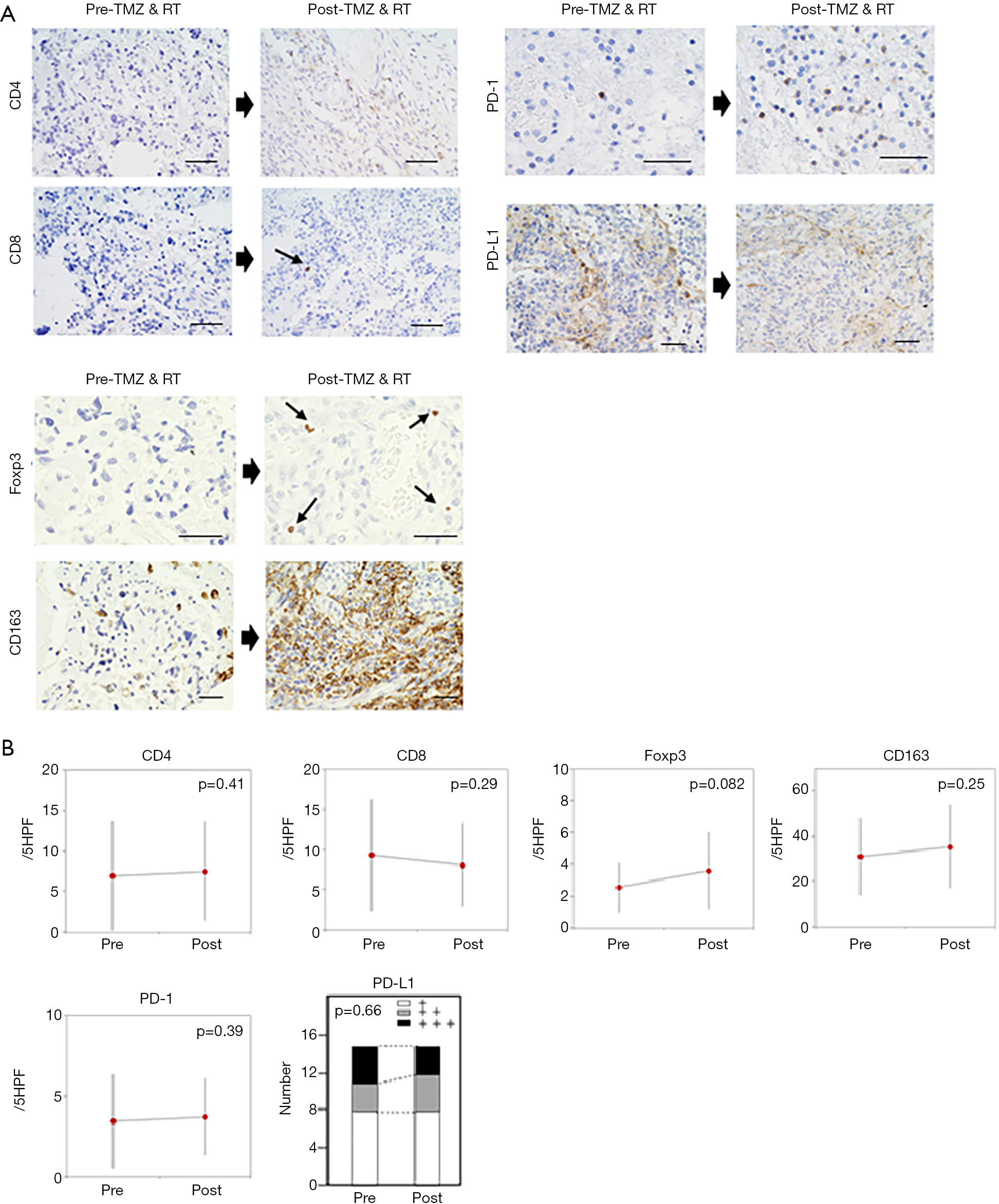 Figure 3 Immunohistochemical analyses of the tumor immune microenvironment. Photomicrographs (A) and the results of statistical analyses (B) are shown. Immunohistochemical analyses demonstrate that the expression levels of CD4, CD8, CD163, PD-1, and PD-L1 are not significantly changed after the treatment with RT and TMZ. The number of Foxp3 (+) cells tended to be increased after the treatment. Black arrow, CD8 (+) lymphocyte, and Foxp3 (+) cells. Original magnification, ×40; scale bar, 100 µm. RT, radiotherapy; TMZ, temozolomide.

Association between the number of TMZ courses and the TME 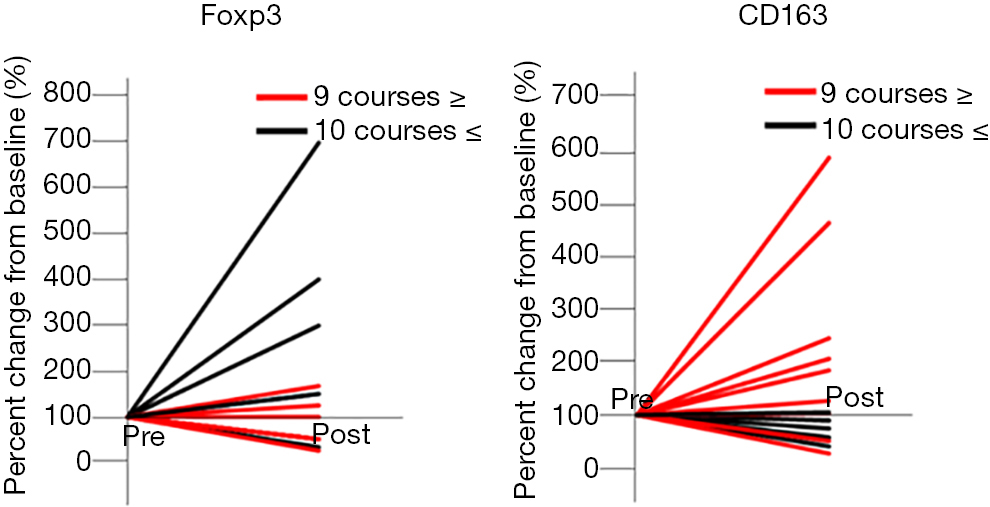 Case 3 had a diagnosis of the initial and recurrent tumors of anaplastic oligodendroglioma and GB, respectively; however, its exclusion from the statistical analyses did not alter the results.

Highlights of the changes in TME after Bev administration

Our previous study reported the overall status of the TME, including tumor oxygenation and stemness, in surgical specimens obtained from patients with GB who underwent surgical resection in three different settings: GBs collected before any treatment (naïve GBs); GBs that were resected following Bev therapy (under the control of Bev); and recurrent GBs that were resected after long-term Bev therapy (Bev failure). In that study, Bev downregulated the expression of the PD-1/ PD-L1 immune checkpoint molecules, suppressed the infiltration of Tregs and TAMs, and increased CTL infiltration (5). The highlights of the changes in TME after the Bev administration (Bev failure) are shown using the original images in Figure 5. 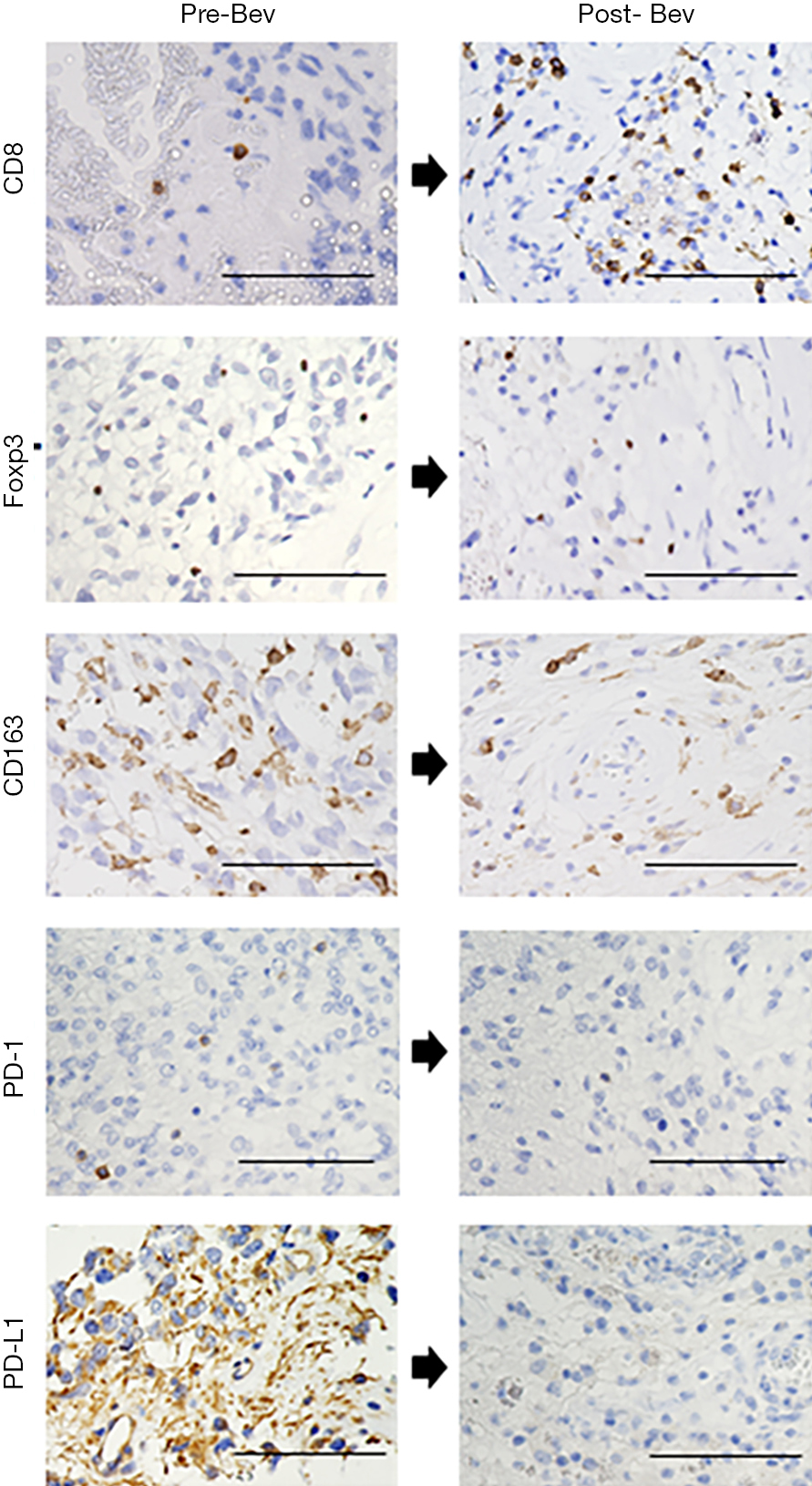 In the present study, the expression levels of CD34, VEGF-A, VEGFR2, HIF-1α, CA9, nestin, CD4, CD8, CD163, PD-1, and PD-L1 did not change significantly after RT and TMZ therapy (Table 1). The expression level of VEGFR1 and the number of Foxp3 (+) cells tended to be upregulated and increased after the treatment, respectively. Therefore, these results strongly support the hypothesis that Bev induces an immunosupportive microenvironment, as described previously (5).

Although alterations in the TME during chemotherapies, such as those that use carboplatin, cisplatin, and cyclophosphamide, have been previously reported, very few studies examined the changes in tumor angiogenesis and TME after treatment with RT and TMZ (2). The effect of the RT and TMZ on tumor vascularity was supposed to be limited in animal models compared with that of Bev (10), whereas the continuous administration of low-dose TMZ (metronomic chemotherapy) reduced the MVD of recurrent GBs (11). In the present study, although MVD was not significantly increased after RT and TMZ, the expression of VEGFR1 tended to be upregulated, which might be associated with the abnormal vascular structure. A gradual deficit of pericyte is associated with blood-brain barrier (BBB) leakage, leading to severe vasogenic brain edema (12). The changes in vascular structure observed after RT and TMZ therapy must be evaluated using the present paired pre- and post-treatment samples.

Regarding immunomodulatory effects, RT and TMZ therapy might even worsen the immunosuppressive TME in GBs. A previous study demonstrated that the number of Tregs increased rapidly during long-term TMZ therapy in GBs, which is known as the rebound phenomenon (13). The present study also demonstrated that the patients who received ≥10 courses of TMZ showed a higher percent change in Foxp3 (+) cells in post-treatment tumors compared with that observed in patients who received ≤9 courses of TMZ. In contrast, our previous study revealed that the number of Foxp3 (+) cells was decreased when Bev was co-administered with RT and TMZ, despite the long-term administration of adjuvant TMZ (5). Furthermore, other studies showed that the number of Tregs was not increased when TMZ was co-administered with immune-modulatory agents, such as vaccination and interleukin-2 (14,15). It may be difficult to understand the alteration of TME after the numerous combinational treatments. The expression of PD-1 was increased in recurrent GBs after RT and TMZ, which was associated with a shorter survival after recurrence (16). In the present study, the expressions of PD-1/PD-L1 were not upregulated in tumors after RT and TMZ compared with that observed in pre-treatment tumors. Further analysis is needed to confirm the changes in immune checkpoint molecules after the treatment.

Immunosuppressive TAMs in the peripheral blood were reported to be upregulated in the recurrent GBs after RT and TMZ (17). Interestingly, in the present study, the TAM status differed from the TMZ courses. Long-term administration of TMZ might sustain the status of TAMs, without their dramatic decrease, which was observed after Bev administration. Furthermore, macrophages express different functional programs in response to microenvironmental signals, which was termed M1/M2 polarization (18). Changes in M1 macrophages must be also examined to confirm the overall status of macrophages after RT and TMZ.

In contrast to TMZ, VEGF/VEGFR-targeted agents promote an immunosupportive TME (9). This finding was compatible with the results of our previous study (5). The previous study demonstrated that VEGF-A produced by the tumor enhances the expression of inhibitory immune checkpoints, thus mediating T-cell exhaustion on intratumoral CD8 (+) T cells. Therefore, a combinational approach using anti-VEGF-A and anti-PD-1 antibodies yielded synergistic effects on the CT26 mouse model of colorectal cancer (9). In particular, the status of Tregs exhibited dynamic changes after the treatment with VEGF/VEGFR-targeted agents. VEGF/VEGFR-targeted therapies, such as Bev, sorafenib, and sunitinib, reduce the population of Tregs in the peripheral blood and tumor tissues in GBs, metastatic colorectal cancer, hepatocellular carcinoma, and renal cell carcinoma (19,20). However, the status of the TME is highly controversial in the recurrent stage, after anti-angiogenic therapy. Tregs are increased in the peripheral blood of patients with recurrent GBs after resistance to VEGFR inhibitors (21). The upregulation of PD-1 on CD4 (+) and CD8 (+) T cells was also reported in patients with GBs or metastatic renal cell carcinoma refractory to VEGFR-targeted therapy (21). The reason why the status of TME in the recurrent stage after anti-angiogenic therapy is controversial, which may be caused by the difference of analyzed samples between systemic circulation (peripheral blood) and local lesion (tumor specimens), in addition to the difference in the target of inhibitors. Tada et al. suggested that analyses of lymphocytes and other immune cells using tumor specimens are more important than analyses of peripheral blood for the investigation of cancer immunology (22). Although most previous studies used peripheral blood mononuclear cells, studies using tumor specimens obtained surgically before and after treatment are considered to be a powerful tool to investigate the biological effects of targeted therapies. Comparative analyses of tumor samples and peripheral blood may be required for monitoring immunosuppressive cells and molecules. Furthermore, the response rate of targeted therapies also contributes to changes of the TME. For example, Tregs, PD-L1 and TAMs are upregulated in patients with metastatic renal cell carcinoma who exhibit a partial response (23). Further investigations are required to determine the differences in therapeutic actions based on the response, dosage and duration of TMZ therapy.

This was the first study to show the alterations of the TME following RT and TMZ therapy using paired pre- and post-treatment samples. The RT and TMZ standard therapy did not yield an immunosupportive effect in patients with malignant glioma.

Funding: This study was supported by the Ministry of Education, Culture, Sports, Science and Technology and the Japan Society for the Promotion of Science (KAKENHI), Grant/Award Number: 18J21382.

Conflicts of Interest: TT serves as an unpaid editorial board member of Annals of Translational Medicine from Dec 2019 to Nov 2021. The other authors have no conflicts of interest to declare.

Ethical Statement: The authors are accountable for all aspects of the work in ensuring that questions related to the accuracy or integrity of any part of the work are appropriately investigated and resolved. All procedures in the present study were in accordance with the ethical standards of the institutional and/or national research committee and with the 1964 Helsinki declaration and its later amendments or comparable ethical standards. This study was approved by the Institutional Review Board of Keio University School of Medicine and Jikei University Kashiwa Hospital (Reference number: 20050002 and 26-334). Written consent was obtained from all patients.