Eagle syndrome (also known as styloid syndrome), was described by American otolaryngologist Watt Weems Eagle in 1937 for the first time, which is also a rare condition that usually characterizes a sudden, sharp nerve pain, such as the pharynx, the back of the throat, and the base of the tongue, triggered by swallowing, moving the jaw, or turning the neck. This entity was usually mediated by elongated styloid processes (the slender pointed skull below the ear), and/or calcification of the stylohyoid ligament, which interferes with the function of the peripheral nerves, causing pain and difficulty in swallowing (1-3). The 3D reconstruction of CT scanning is recommended to visualize elongated styloid processes (4,5). Surgical removal of elongated styloid processes is currently the most common treatment for eagle syndrome (6).

In addition, elongated styloid processes can also impinge the surrounding blood vessels. The vascular eagle syndrome is usually caused by elongated styloid process that impinges the internal carotid artery. In this condition, the blood flow of the internal carotid artery is restricted by external impingement, resulting in transient ischemic attack and stroke (7,8). However, few reports were about the eagle syndrome with venous compression. In this study, we aimed to identify the clinical profiles of the internal jugular vein stenosis (IJVS) related eagle syndrome comprehensively in an attempt to gain better understanding of this syndrome and provide reference for clinical diagnosis and treatment.

This study was conducted and approved by the Institutional Ethic Committee of the Xuanwu Hospital, Capital Medical University, Beijing, China. All patients signed informed consent before enrolling. From October 2017 to October 2018, a total of 27 patients, were diagnosed as IJVS induced by elongated styloid process were enrolled in this single center real-world study.

The exclusion criteria were the following: (I) No abnormally distorted collateral vessels were found in CE-MRV, CTV or CV. (II) The measured length of styloid process at 3D reconstruction of CT scanning was less than 3 cm, which was inconsistent with the diagnostic criteria of Eagle syndrome. (III) The symptoms could be explained by other diseases, such as pre-existing ophthalmology or otology diseases (IV) CNS malignancy. (V) Patients with incomplete clinical data.

All patients received standard medical treatment after admission, including antiplatelet and standard anticoagulant therapy, dehydration, and other symptomatic treatments to alleviate clinical symptoms. Given the clinical consensus and guidelines for surgical intervention of IJVS associated eagle syndrome is lacking, elongated styloid processes resection and subsequent balloon dilation and/or stenting were performed only when the patient strongly requested surgery.

Social Science Statistical Software Package (SPSS) version 21.0 program was applied for this study. Continuous variables that conform to Gaussian distribution are represented by mean ± standard deviation. Otherwise, they are represented as median (interquartile range). Comparison of continuous variables was calculated by t test or by Mann-Whitney U test. Categorical variables were depicted as counts and percentages, which were analyzed by chi-square test. Two-sided P values <0.05 were considered a statistically significant difference.

From October 2017 to October 2018 in Neurology Department, Xuanwu Hospital (Beijing, China), a total of 133 consecutive patients who met the IJVS diagnostic criteria were enrolled. In which, 27 IJVS cases matched the diagnostic criteria for Eagle Syndrome were into the final analysis, included 15 males and 12 females. The mean age was 59.7±11.3 years. The onset-to-door time was 3 (1–10) years. 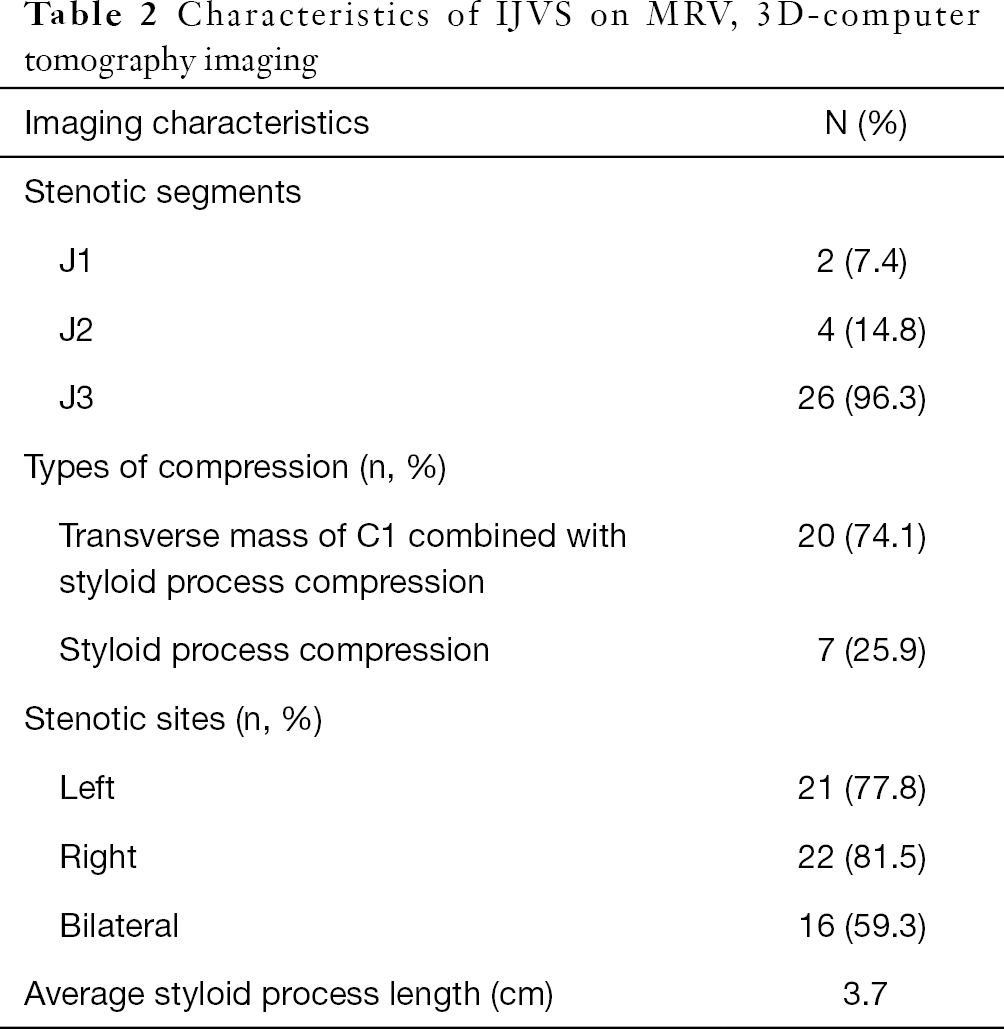 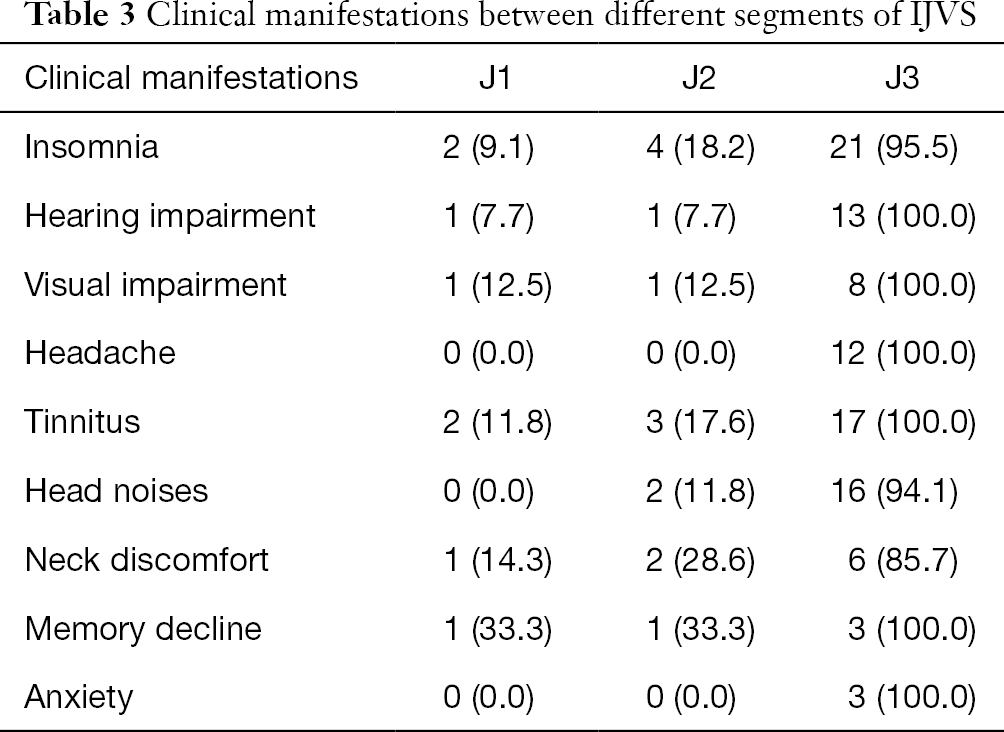 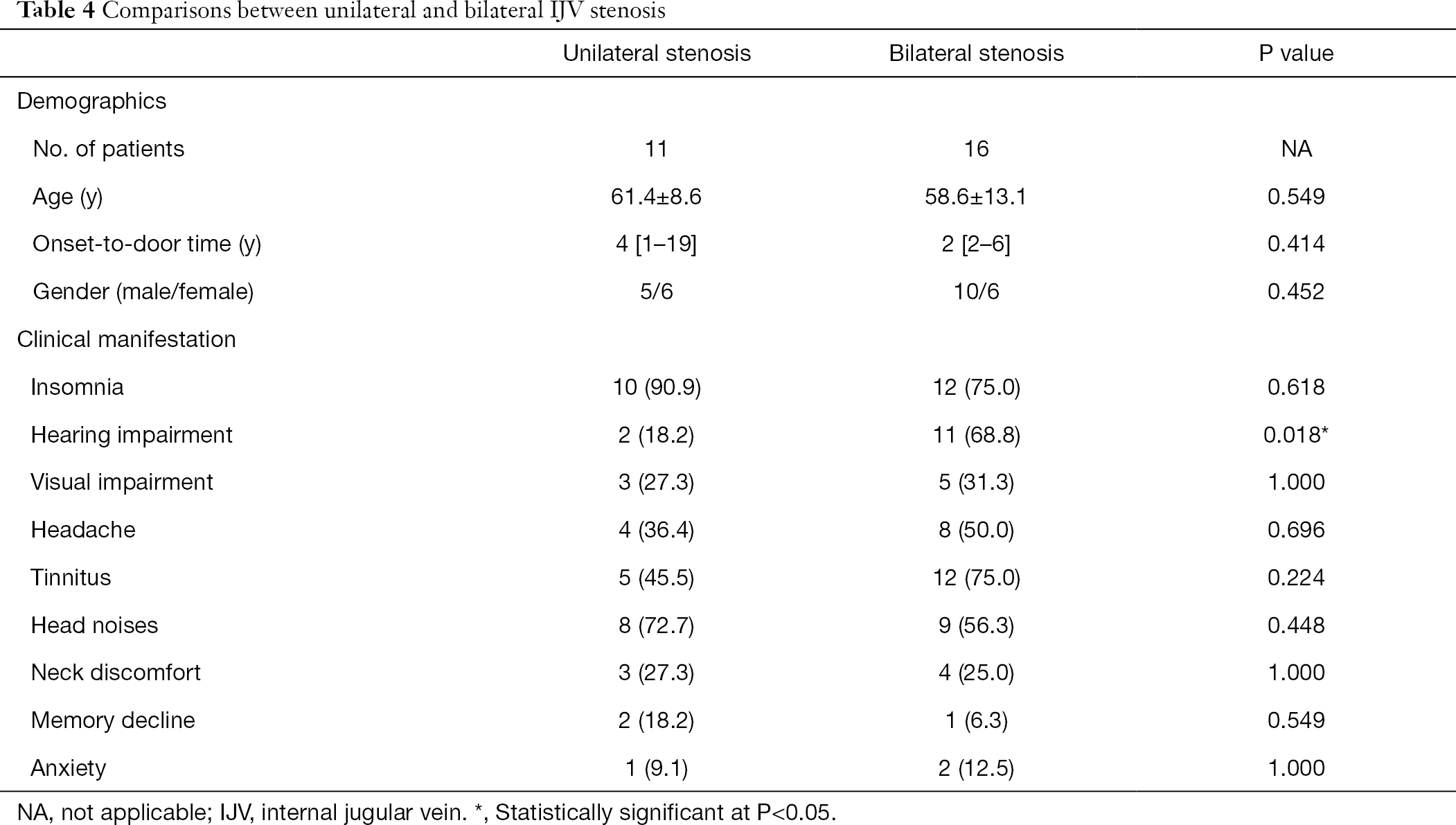 Among the 27 cases, only one patient underwent surgical intervention. This 49-year-old male, who complained of intermittent headaches, persistent head noises and tinnitus for 3 years, was confirmed the diagnosed as severe bilateral IJVS surrounded by abnormally distorted vertebral venous plexuses by CE-MRV in Xuanwu Hospital in November 2017. 3D reconstruction CT maps showed the bilateral IJVS at J3 segments were obviously compressed by the adjacent lateral mass of C1 and styloid process. The styloid processes length was 4.4 cm in left and 4.1 cm in right (Figure 1). The patient underwent bone resection and balloon dilation in left IJV after finished his comprehensively preoperative assessment, as the outflow disorder in left IJV was more severe than that in right. Both the styloid process and the lateral mass of C1 on the left side were resected and the left stenotic IJV was corrected by balloon dilation. The symptoms were relieved immediately after surgery. More importantly, at one-year follow-up post-operation, all symptoms were disappeared and the previous left stenotic IJV had restored normal blood flow and the abnormally tortuous vertebral venous plexus was also decreased in his follow-up CTV maps (Figure 2). 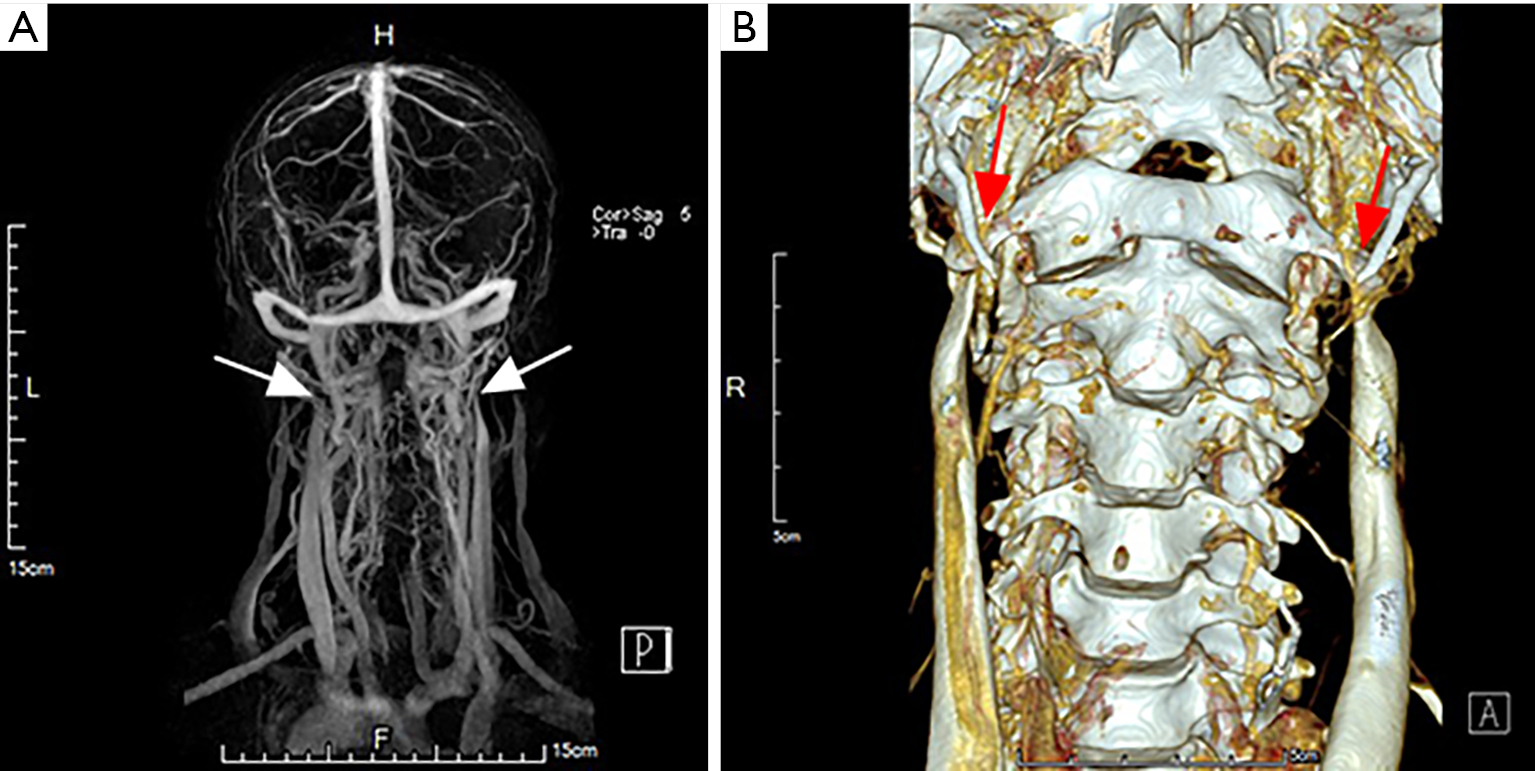 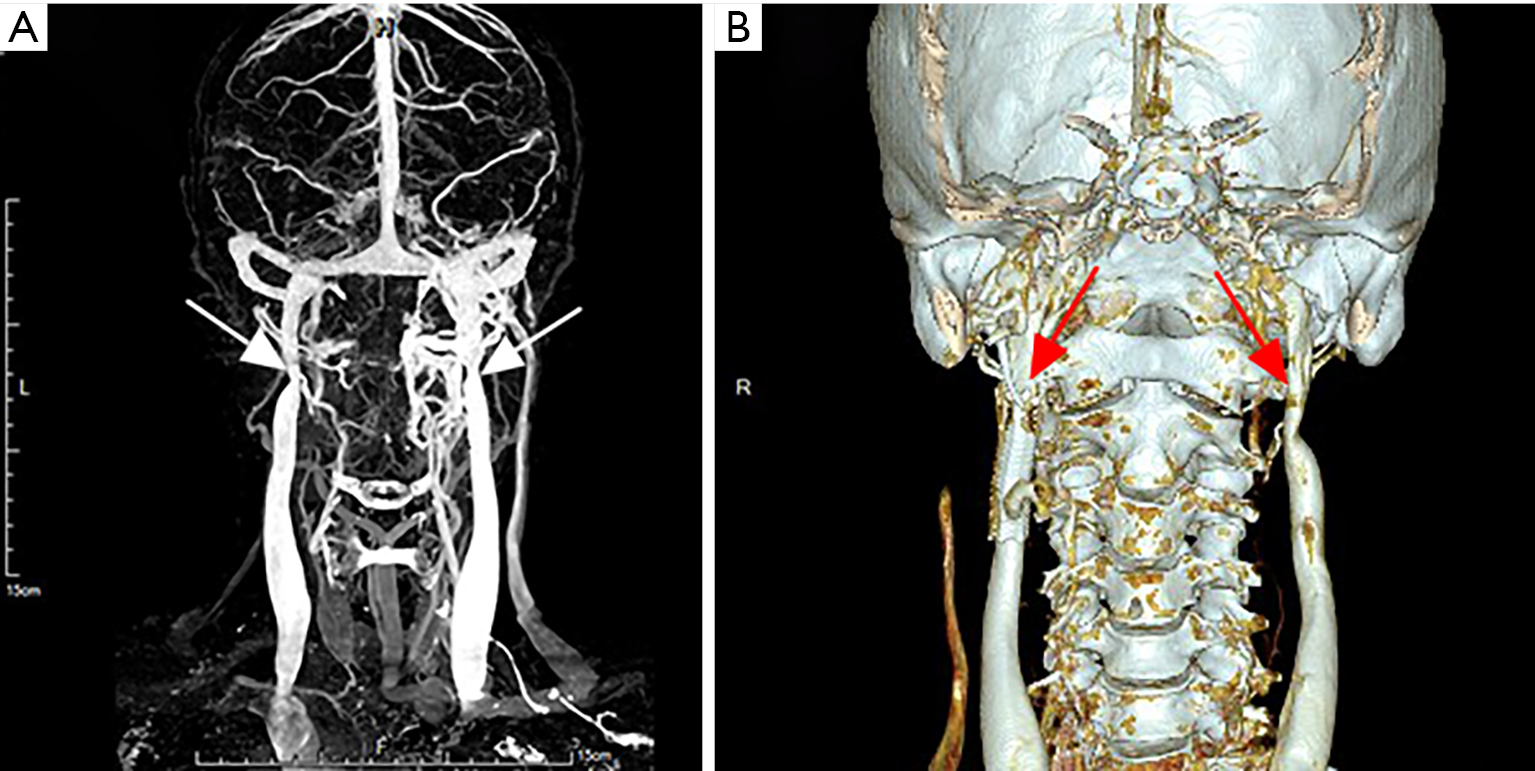 Eagle syndrome is a rare condition result in pharyngeal pain, facial paresthesia and pain, difficulty swallowing, and symptoms of arterial impingement due to elongation of the styloid process. Several case reports and clinical reviews have reported the clinical and imaging features of typical eagle syndrome (1-6). However, few reports were about eagle syndrome focuses on venous symptoms up to now. In our clinical practice, we have noticed that a few numbers of IJVS showed bony compression, especially elongated styloid processes combined with transverse mass of C1. In an attempt to gain better understanding of this entity and provide reference for clinical diagnosis and treatment, we aimed to depict the clinical manifestations and imaging features of IJVS related eagle syndrome.

In clinical practice, clinical presentation and image characteristics are essential for the diagnosis of IJVS. Notably, the stenotic IJV and surrounding abnormally tortuous vertebral venous plexus compensation are vital clues for the diagnosis of symptomatic IJVS. However, the unfamiliarity with IJVS and the lack of awareness of this disease entity have resulted in patients being misdiagnosed and delayed treatment in their first-time clinical visiting. We noted that the average age of IJVS patients in our study was in their middle age (59.7±11.3 years), and the time of first diagnosis was several years after symptoms onset (the median time from symptoms onset to confirm the diagnosis was 3 years). In addition to depicting the clinical profiles of eagle syndrome related IJVS for the first time, this study also provides a reference to clinicians who are not familiar with this entity, to avoid misdiagnosis and treatment delay.

Many literatures have reported that various CNS diseases such as multiple sclerosis, Alzheimer’s disease, and Parkinson’s disease may be associated with IJVS (9-12). The underlying pathological mechanism of IJVS is unclear but has aroused great interests among researchers. Notably, clinical symptoms in our study such as insomnia, tinnitus, head noises, hearing impairment, visual impairment, headache, neck discomfort, memory decline and anxiety were similar to the previously reported non-external compression IJVS cohort description (13,14). This may suggest that IJVS with different etiologies may share the same pathological mechanism regardless of the presence of external compression.

With the development of imaging technology, it is not difficult to discover stenotic IJV induced by osseous compression below the skull base in the routine examination. Previous studies have reported that the proportion of osseous compression in Chinese IJVS accounts for about 40% (13-15). In which, the transverse process of C1 and the styloid process are the most common factors of bony compression. Differing from previous studies, our study revealed that elongated styloid process compressed not only artery but also venous wall, resulting in neurological disorder. To our knowledge, this is the report for the first time. In addition, IJV is more susceptible to be compressed by adjacent structures due to lack of smooth muscle, especially abnormal bone structures, such as the transverse process of C1 and the styloid process.

IJV can be divided into three segments, the upper (J3), the middle (J2) and the inferior segment (J1). In which, the J3 segment is the most vulnerable segment. Our study found that 96.3% of IJVS occurred in J3 segment, which is consistent with previous IJVS cohort studies (13-15). These findings suggest that J3 segment is a vital part of the connection to cerebral venous sinus, as a result, its blood flow shear stress is larger than the other two segments, so the vascular endothelium is more susceptible to damage. More importantly, the J3 segment of IJV is close to many bony structures, such as the transition process of C1 and the styloid process, thus is more susceptible to be compressed by adjacent abnormal bony structures.

Our study revealed that the percentage of patients with unilateral stenosis was similar to bilateral stenosis. In addition, the age, symptoms onset to door time, and gender distribution were similar between the two patients’ subgroups. With regard to clinical symptoms, hearing impairment was more common in bilateral stenosis subgroup. This may suggest that bilateral IJVS may cause more severe blood flow circulatory disturbances in auditory-related structures.

Previous literature on stenting has been controversial for the efficacy of IJVS Caucasians with multiple sclerosis (16-21). In our previous cohort study, we found that nonexternal-compressed IJVS Chinese in the absence of multiple sclerosis was significantly able to benefit from stenting (22). However, it is worth noting that for an identified external compression IJVS, simple stenting may be ineffective or even harmful. For extrinsic impingement of the IJVS, simple stenting may present an adverse event in which the balloon cannot well expand and block the IJV blood flow (23-25). In this condition, the decompressive bone resection may become the first choice for bony compression induced IJVS. In addition, in a recent work, the author underlines the importance of “dynamic imaging in suspected Eagle Syndrome” rather than static one on eagle syndrome related IJVS diagnosis (26,27). In our study, only one patient received the decompressive bone resection. Although the patient reported symptomatic relief at 1 year of follow-up, our study was unable to draw conclusions about the safety and efficacy of the decompressive bone resection due to the small number of patients included. Accordingly, larger prospective studies are needed to explore the safety and efficacy of decompressive bone resections.

Our study has several limitations. Firstly, the number of patients we included in this study was small, which may only reflect real-world information in our center. Secondly, we did not perform a quantitative analysis of the patient’s symptoms, so the comparison of unilateral stenosis with bilateral stenosis may not be accurate enough. Finally, only one patient received decompressive bone resection. A greater prospective trial regarding the safety and efficacy of the decompressive bone resection is urgently needed.

Neurological symptoms of Eagle syndrome induced IJVS were various. Mainly included insomnia, head noises and tinnitus. The most vulnerable section was J3 segment of IJV. Hearing disorder was more common in patients with bilateral IJVS. A better understanding of this disease entity may provide a great reference for clinicians and avoid misdiagnosis. Decompressive bone resection may be a promising method to treat IJVS related eagle syndrome. However, more prospective trials on the aspects of safety and efficacy of the decompressive bone resection are urgently needed.

We would like to thank all patients and doctors who participated in this study for their cooperation.

Ethical Statement: The authors are accountable for all aspects of the work in ensuring that questions related to the accuracy or integrity of any part of the work are appropriately investigated and resolved. This study was conducted and approved by the Institutional Ethic Committee of the Xuanwu Hospital, Capital Medical University, Beijing, China. All patients signed informed consent before enrolling.