We conducted a retrospective matched-pair case-control analysis of patients with locally advanced gastric cancer who underwent neoadjuvant chemotherapy in the Peking Union Medical College Hospital between December 2006 and September 2012. Specifically, this study investigated the needs and criteria for modifying the post-gastrectomy chemotherapy regimen based on the patient’s response to preoperative chemotherapy to further improve patient survival.

The histological evaluation after preoperative therapy was assessed by an independent pathologist (DRZ) who evaluated all specimens from radical surgery and confirmed the proportion of tumor necrosis and fibrosis within the lesion. The percentage of residual tumor cells, or GHR, within the lesion was recorded as 0–100%, with 0% representing no necrosis or cellular or structural changes within the whole lesion and 100% having an entire lesion that disappeared or replaced by fibrous tissue without any viable tumor cells.

Up until January 31st, 2016, patients were followed up with at regular intervals (every 3 to 6 months) by either a clinic visit or by telephone. Tumor markers and CT scans were performed regularly (13). 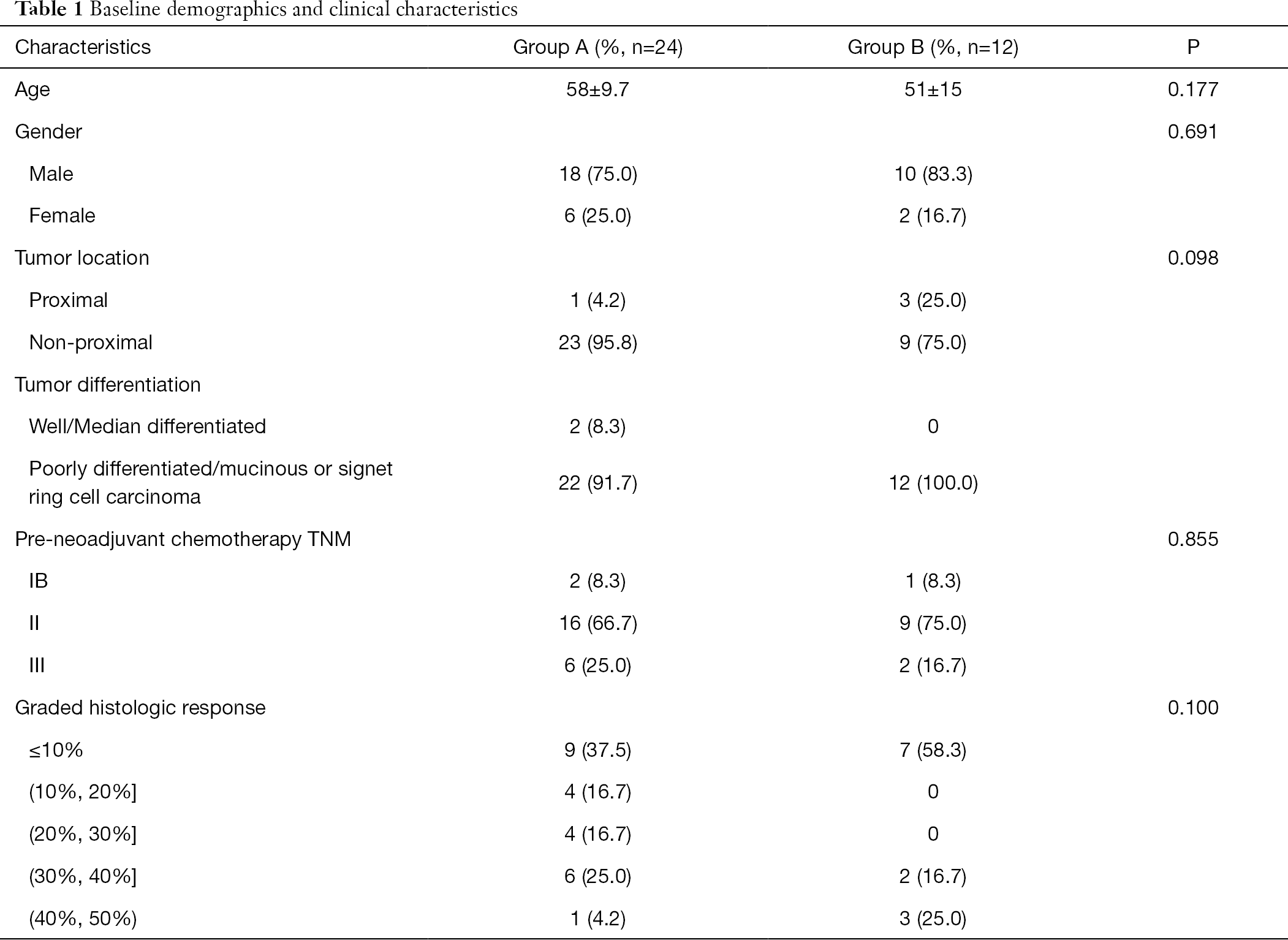 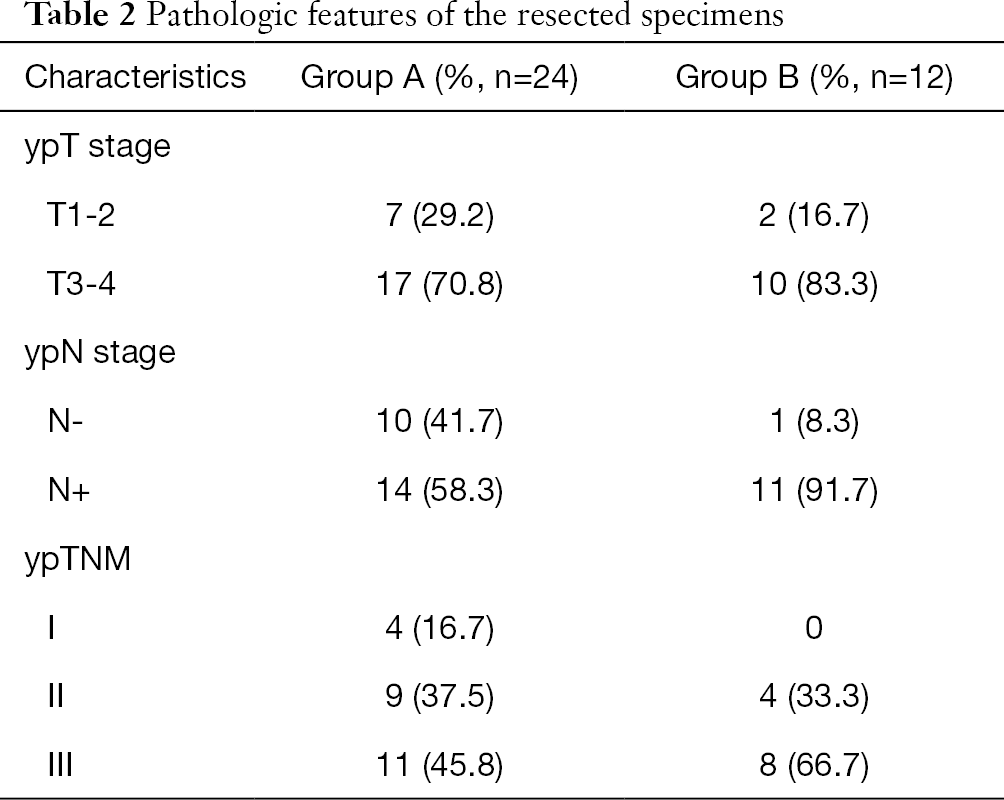 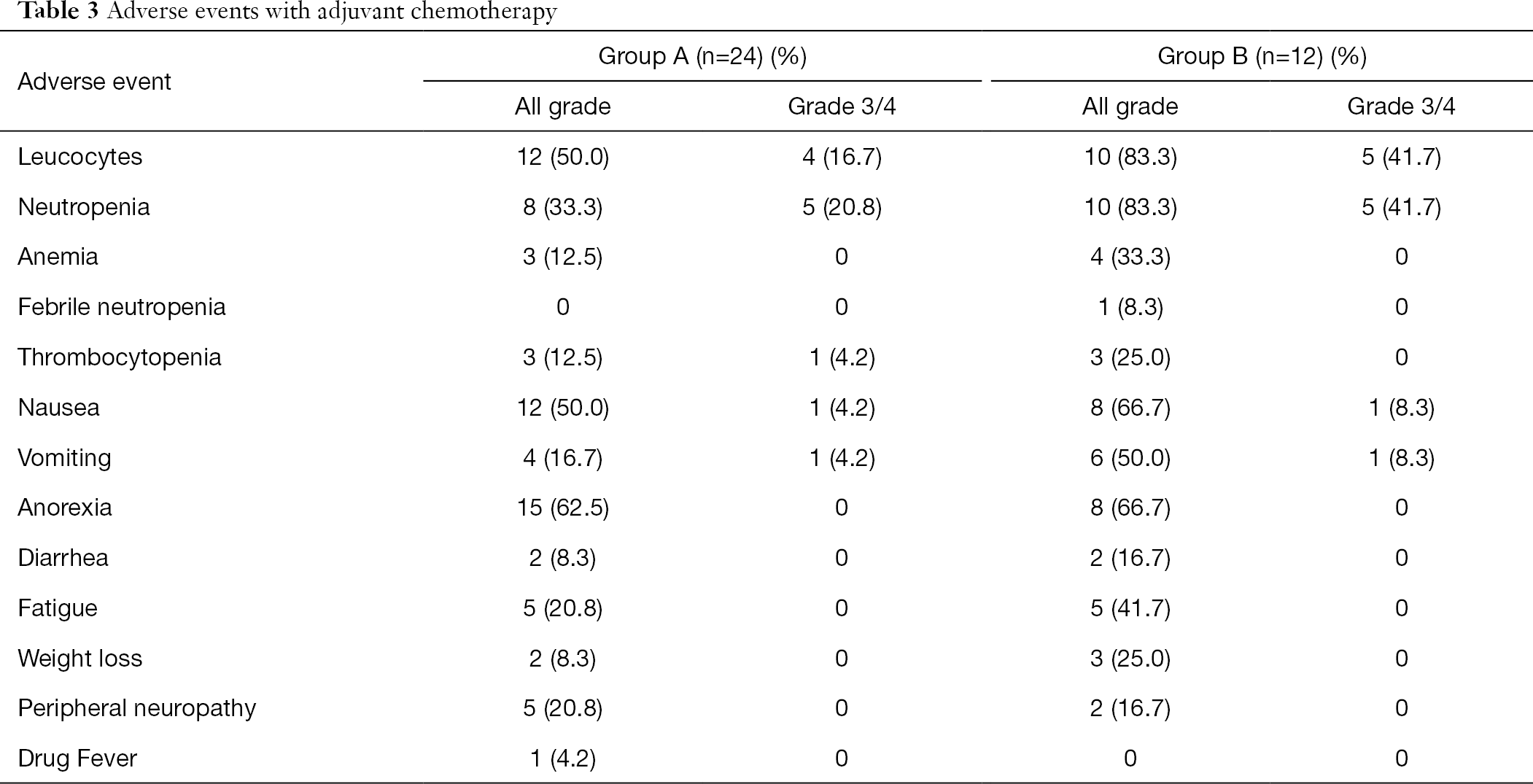 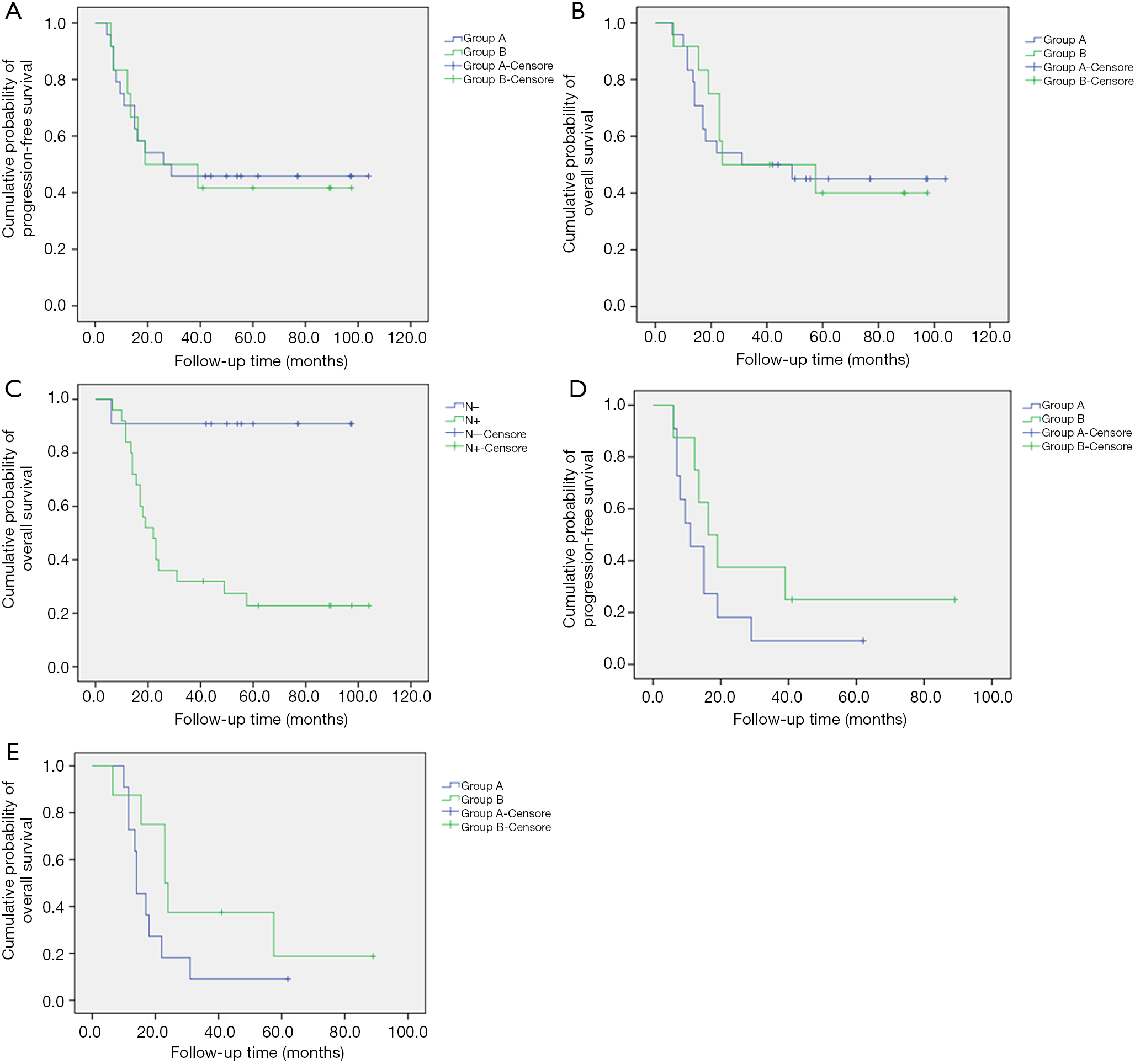 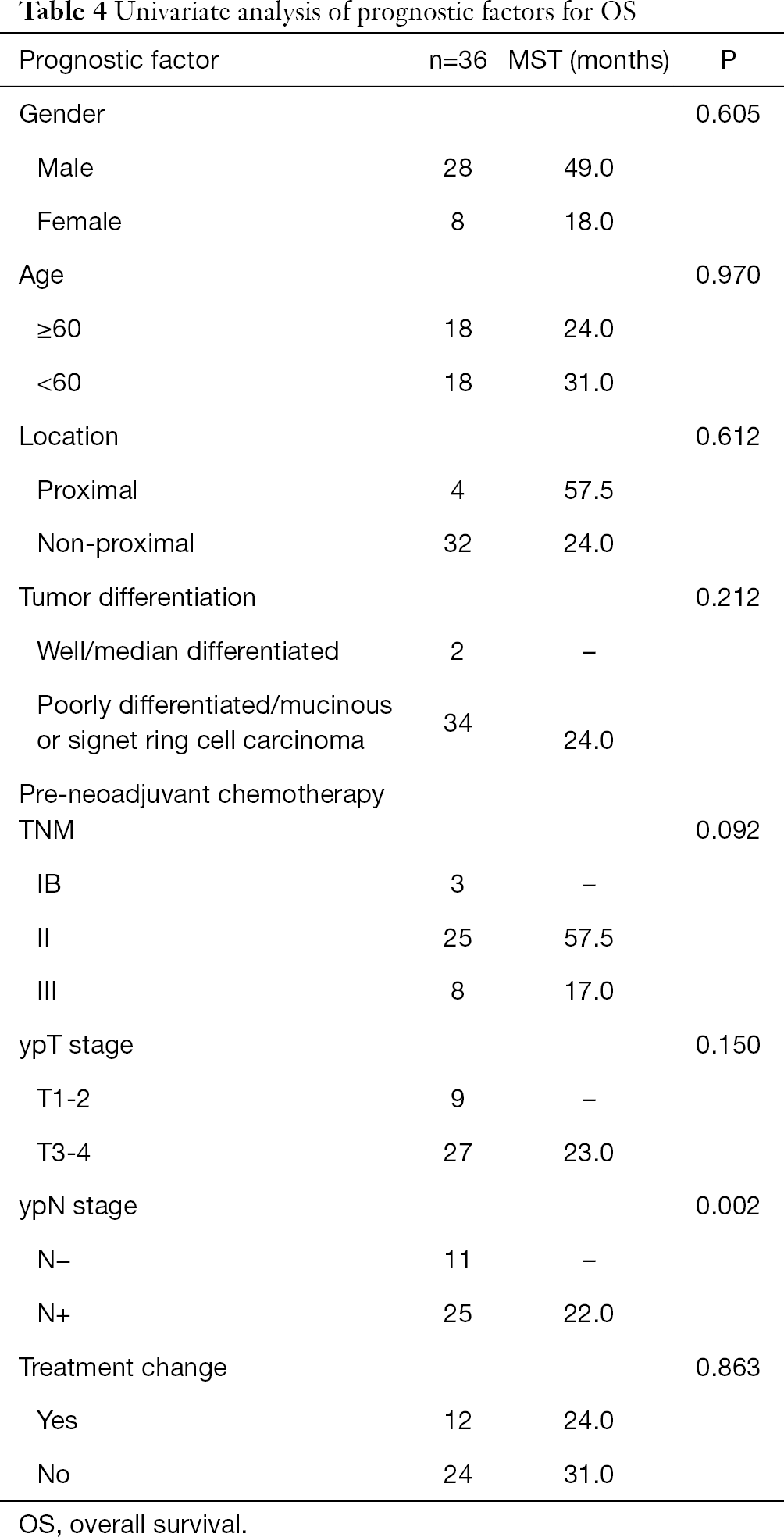 Nearly 70% of patients with locally advanced gastric cancer respond to preoperative chemotherapy regimens, such as FU plus cisplatin (FP) (14), S-1 plus cisplatin (SP) (15,16), FOLFOX (17,18), or XELOX (19). In other words, approximately one-third of the patients may not respond to chemotherapy, which necessitates the use of a modified postoperative regimen. However, criteria to screen and find patients who do not benefit from preoperative chemotherapy have not been established, making it difficult to develop standardized postoperative treatment strategies. Until now, the same chemotherapy regimens were used before and after surgery in most clinical trials (2,3,20). Thus, developing reliable and practical criteria is essential for the screening, identification, and development of alternative treatment strategies for patients who do not benefit from preoperative chemotherapy.

Graded (from 0% to 100%) histologic response provides a visual and objective method for evaluating the efficacy of neoadjuvant chemotherapy. In 2003, Becker et al. (8) proposed a classification of histopathologic regression for primary tumors, and in 2011, the Japanese Gastric Association updated its histological evaluation criteria (21). These two criteria are the most common and have been used in most studies of neoadjuvant chemotherapy for patients with gastric cancer based on histological evaluation with proven correlation with prognosis (7-10,21). However, these criteria do not define the cut-off value at which postoperative chemotherapy should be modified. While exploring the threshold of GHR, several authors have found that a GHR ≥50%/<50% could serve as a prognostic factor in resected patients after neoadjuvant chemotherapy (6,11).

In this study, we also used 10%, 20%, 30%, and 40% GHR as the thresholds for regimen modification. The results show that the lower of the GHR rate, the more prolongation of survival would be obtained once the patients received chemotherapy modification. Therefore, patients with a low GHR rate should receive modified chemotherapy soon after surgery.

This study is retrospective with small sample size. Although we were not able to confirm a survival benefit in patients with locally advanced gastric cancer who received modified chemotherapy after surgery based on a GHR <50% after preoperative neoadjuvant chemotherapy, we found that regimen modification may be beneficial for patients with advanced disease (stage III) whose GHR was <50% after preoperative neoadjuvant chemotherapy. These findings should be further investigated in a randomized prospective clinical trial.

We thank the patients, their families, their caregivers, and the investigators and their team members for taking part in this study. Professional statistics and data assistance were provided by Dr. Yanlong Li (Institute of Basic Medical Sciences, Peking Union Medical College & Chinese Academy of Medical Sciences, Beijing, China).

Ethical Statement: The authors are accountable for all aspects of the work in ensuring that questions related to the accuracy or integrity of any part of the work are appropriately investigated and resolved. The study protocol was approved by the Institutional Review Board of Peking Union Medical College Hospital, Chinese Academy of Medical Sciences (No. S-613), and all the participants signed an informed consent form.