Gliomas are the most common and malignant primary intracranial brain cancer, with an average annual incidence rate of 7.15 per 100,000 in the United States (1-3). In the past, the classification of brain tumors has been based widely on classic histologic features. Recently, with the evolution of molecular pathology research in the central nervous system (CNS), some molecular biomarkers have provided information for clinical diagnosis and treatment. In 2016, with changes to the World Health Organization (WHO) classification of CNS, the use of both genotype, such as isocitrate dehydrogenase (IDH) mutation and 1p/19q co-deletion status, and morphologic classification, have led to more accurate diagnoses (4). As for treatment, in the NCCN clinical practice guidelines of CNS Cancers Version 1.2019, IDH mutation, 1p19q co-deletion and O6-methylguanine-DNA methyltransferase (MGMT) promoter methylation have been recommended for testing in low grade glioma, anaplastic oligoastrocytoma and glioblastoma, respectively, as stratified factors for sensitivity to chemotherapy and favorable prognosis.

The distribution and IDH mutations are common in 65–80% of grade II and III gliomas, and in 80–90% of secondary glioblastomas, but are almost never seen in glioblastoma (5-7). As a predictor of survival, IDH1/2 mutations are associated with a favorable prognosis, especially with radiation or alkylating therapy (8,9). This alteration is also associated with co-deletion of 1p/19q and MGMT promoter methylation (10). MGMT is a DNA repair enzyme that induces resistance to alkylating chemotherapies; therefore, silencing this gene can lead to sensitization to alkylating agents (e.g., temozolomide) (11-13). The methylation of the MGMT promoter is commonly found in glioblastoma and less commonly in lower grade gliomas, with survival advantages in glioblastoma (1). Patients with MGMT promoter methylation had more therapeutic benefits from temozolomide, compared to those with an unmethylated promoter (14). Co-deletion of 1p and 19q represents a co-deletion of the short arm of chromosome 1 and the long arm of chromosome 19, which is strongly associated with oligodendroglial histology (15). The co-deletion confers a favorable prognosis and is predictive of response to both PCV (procarbazine, lomustine, and vincristine) and temozolomide (16,17).

The China National Health and Family Planning Commission published an announcement in the Clinical Practice Guidelines of the CNS in September 2014, setting standards for the molecular diagnosis of gliomas. Since, the genetic tests of 1p/19q co-deletion, MGMT promoter methylation and IDH1/2 mutations have been applied for almost 4 years. Considering the clinical efficacy in glioma, detecting the current prognostic values of these genes and probe as biomarkers for clinical prognosis are essential. In this study, we investigate the clinical prognostic effects for IDH mutations, MGMT promoter methylation, and 1p/19q co-deletion in high-grade glioma patients, respectively. Furthermore, in order to explore whether the combination of these genes could serve as a novel prognostic marker, we classified the high-grade gliomas into 5 molecular groups and compared the progression-free survival (PFS).

We recruited 460 patients (male/female ratio: 1.42:1), who were diagnosed with gliomas and accepted genetic tests, such as IDH mutation, MGMT promoter methylation, and 1p/19q co-deletion, from January 2015 to June 2017 in Xiangya Hospital of Central South University. Glioma diagnosis for patients in this cohort was made by the patient’s referring clinicians according to 2016 WHO classification for brain tumors (4). Glioblastoma (n=132), astrocytoma (n=111), anaplastic astrocytoma (n=72), oligodendroglioma/oligoastrocytoma (n=79), and anaplastic oligodendroglioma/oligoastrocytoma (n=32) were the predominant diagnoses. All of the patients’ diagnoses were pathologically confirmed, and the medical records were collected from the date of surgery.

All 460 patients accepted tumor resection. After resection, 269 patients received systemic therapy (181 patients received RT + TMZ; 6 received RT alone; 82 received TMZ alone). The therapy regimen was based on NCCN clinical practice guidelines in oncology and adjusted for patients with different individual statuses. The study was defined to investigate newly-diagnosed high-grade diffuse infiltrating gliomas from 15 months of follow-up in 240 cases. Endpoints included overall survival (OS) and PFS. OS was defined as the time from the date of diagnosis to the date of death from any cause (or patients were censored at the date of last follow-up). PFS was calculated as the time from date of surgery to the first documented evidence of disease progression.

The status of the MGMT promoter, IDH, and 1p19q was determined by the Department of Pathology of Xiangya Hospital. DNA extraction from the glioma specimens was performed to analyze the IDH status by polymerase chain reaction PCR sequencing from laboratory-developed tests, targeting commonly mutated areas. The MGMT promoter methylation status of the tumor was determined by quantitative methylation-specific PCR with the Qiagen EpiTect Fast DNA Bisulfite Kit (Cat No. 59802). Additionally, 1p36/19q13 was detected by the Vysis 1p36/1q25 and 19q13/19p13 fluorescent in situ hybridization (FISH) probe kit according to the manufacturer’s manual (Abbott, Illinois, USA). In interphase nuclei of glioma cells with the LSI 1p36 and LSI 19q13 probes, green signals are indicative of centromeres, and orange signals represent deletions. The 1p36 and 19q13 deletions are determined when the ratio between orange signals and green signals are less than 0.7 and 0.8, representatively. FISH results are provided in Figure S1.

Between January 2015 and June 2017, a total of 1,309 patients were diagnosed as gliomas, and 460 (35.1%) of these patients had performed genetic tests at Xiangya Hospital (Figure S2A). The majority of physicians who prescribed genetic testing were assistant director physicians (60.3%), followed by director physicians (26.0%) and attending physicians (13.7%) (Figure S2B). Since January 2015, an increasing number of cases who accepted genetic testing has been observed from patients’ distribution diagrams (Figure 1). Single genetic tests were evaluated in 33.3% (153/460) of cases. Approximately 67.1% of patients underwent MGMT promoter methylation tests, often as part of panels with 1p19q co-deletion. As for the patients who chose multiple gene tests, about 99% performed three gene tests including IDH, MGMT and 1p19q. Only 1% patients detected two genes, such as MGMT and IDH or MGMT and 1p19q status. 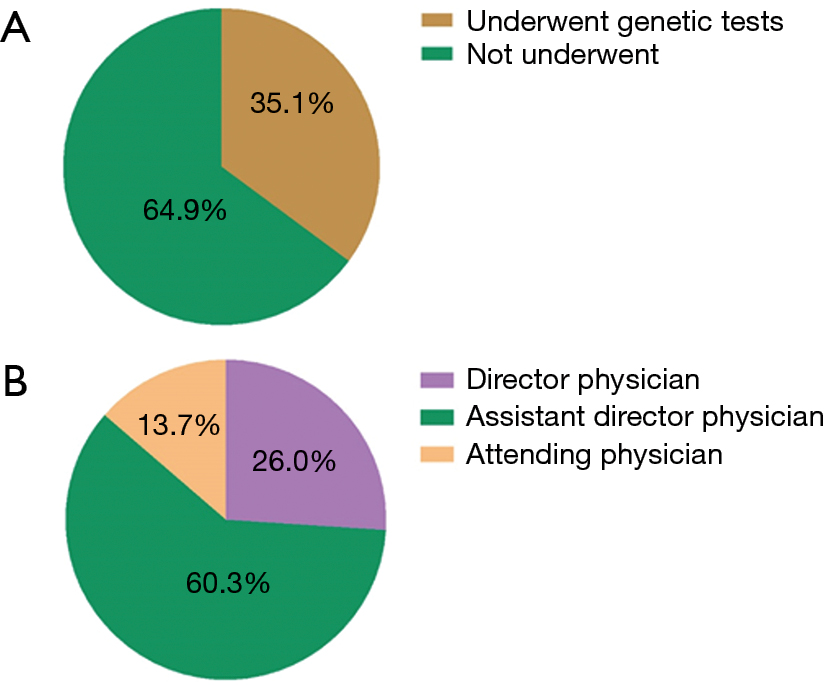 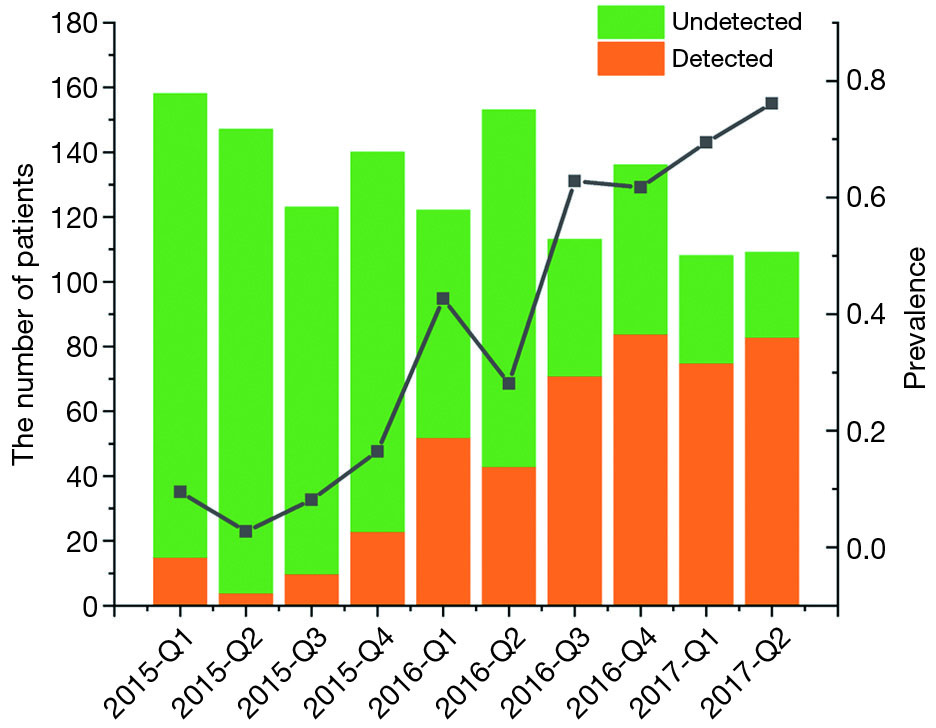 Figure 1 Number of patients and detected genes in each quarter. 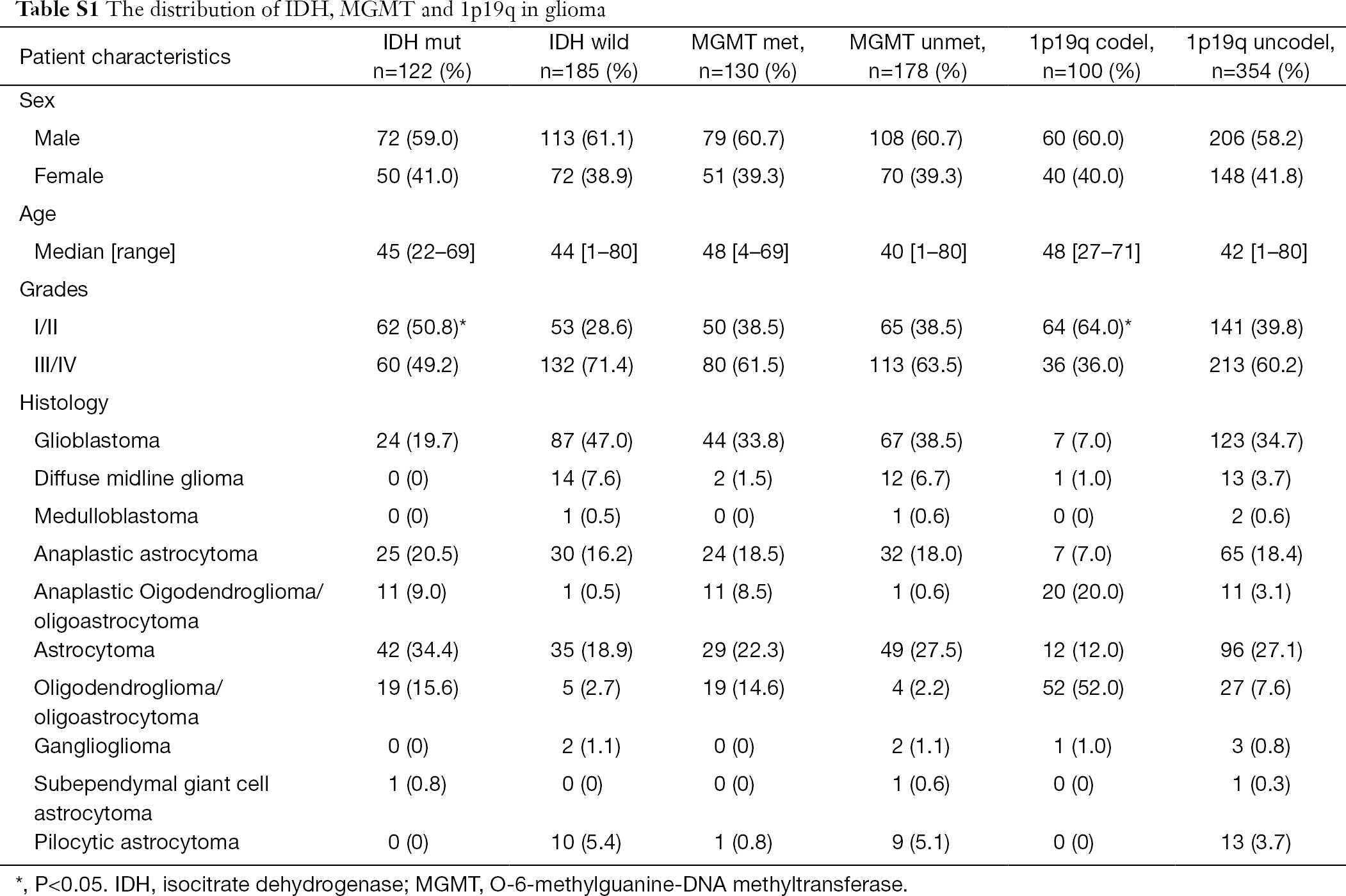 Table S1 The distribution of IDH, MGMT and 1p19q in glioma
Full table

The effect of IDH mutation, MGMT promoter methylation, and 1p19q co-deletion in OS

We analyzed OS in high-grade gliomas, as the follow-up time was not sufficient in low-grade patients. As shown in Table 1, we identified 103 patients with newly-diagnosed high-grade diffuse infiltrating gliomas aged more than 18 years, who accepted systemic therapy (Figure 3). We classified above gliomas into the following groups: (I) IDH1/2 mut and IDH1/2 wt; (II) MGMT promoter met and MGMT promoter unmet; III) with 1p36/19q13 co-deletion and without 1p/19q co-deletion. Using Kaplan-Meier survival analysis, OS were found to be significantly improved in the MGMT promoter met group as compared to the MGMT promoter unmet group (P=0.025) (Figure 4A). However, there was no significant difference between IDH mutation groups, as well as 1p19q co-deletion groups in patients’ OS (Figure 4B,C). The combination group analysis also found no significant difference in 5 combination groups (Figure 4D). 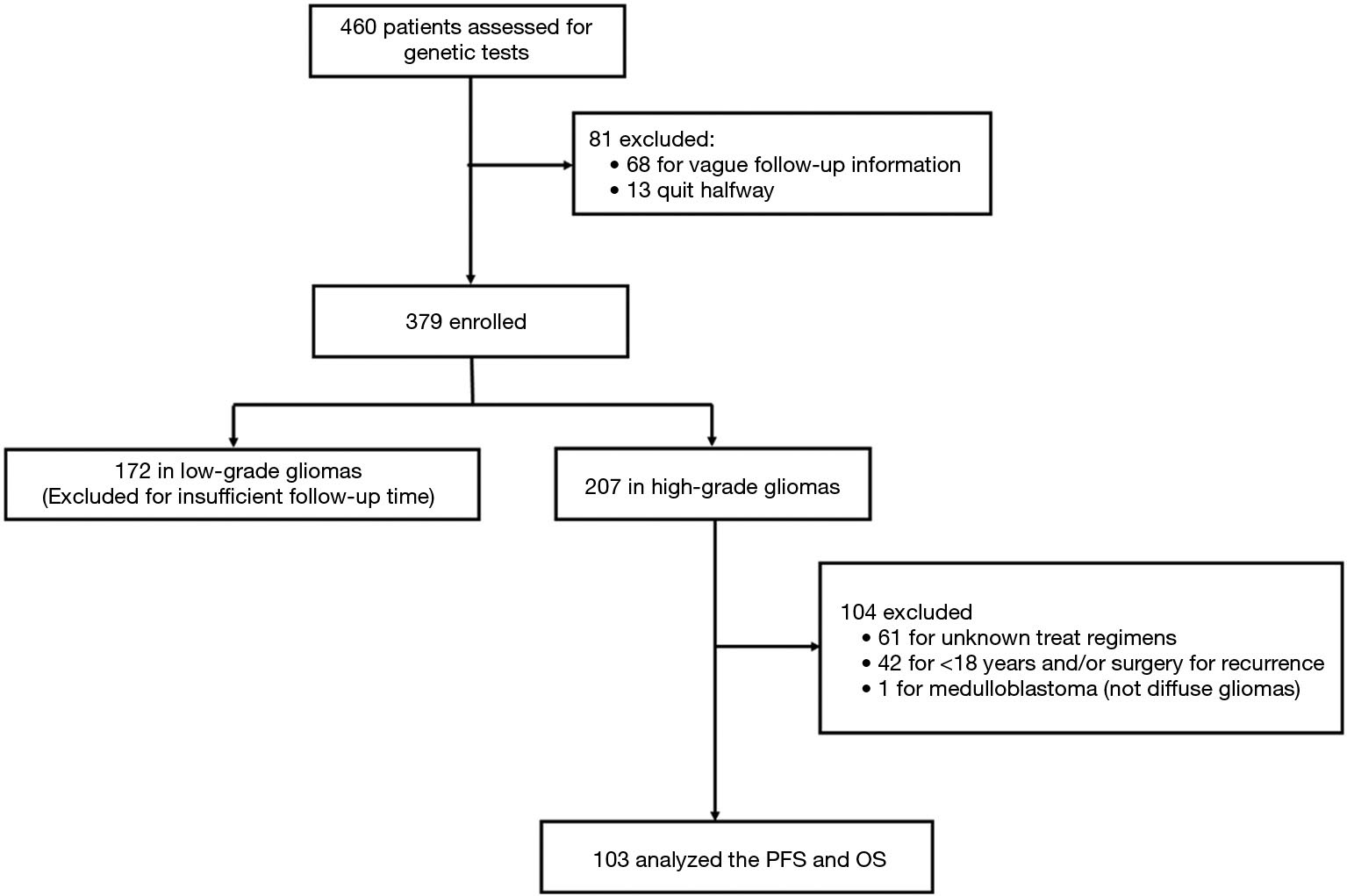 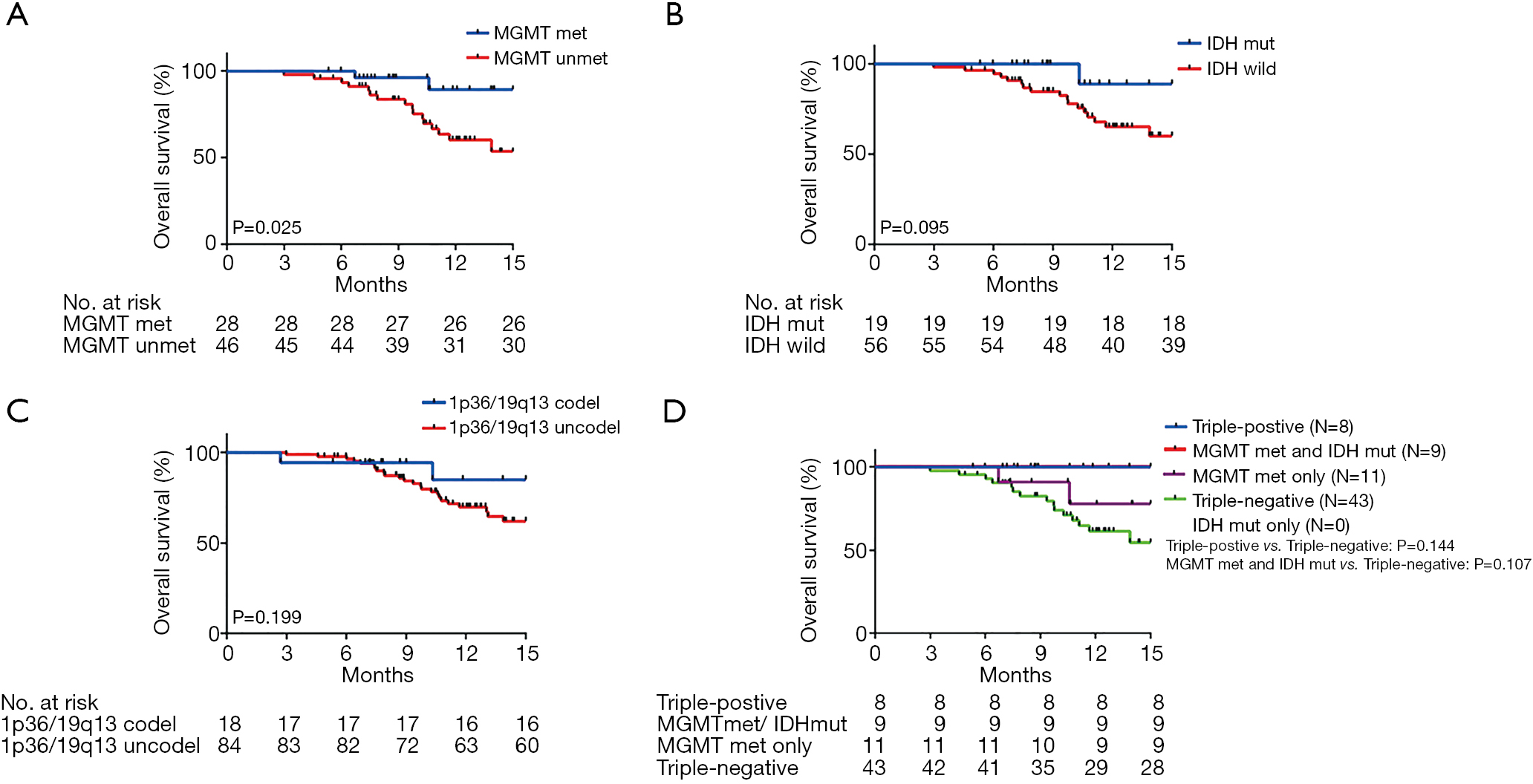 The effect of IDH mutation, MGMT promoter methylation, and 1p19q co-deletion in PFS 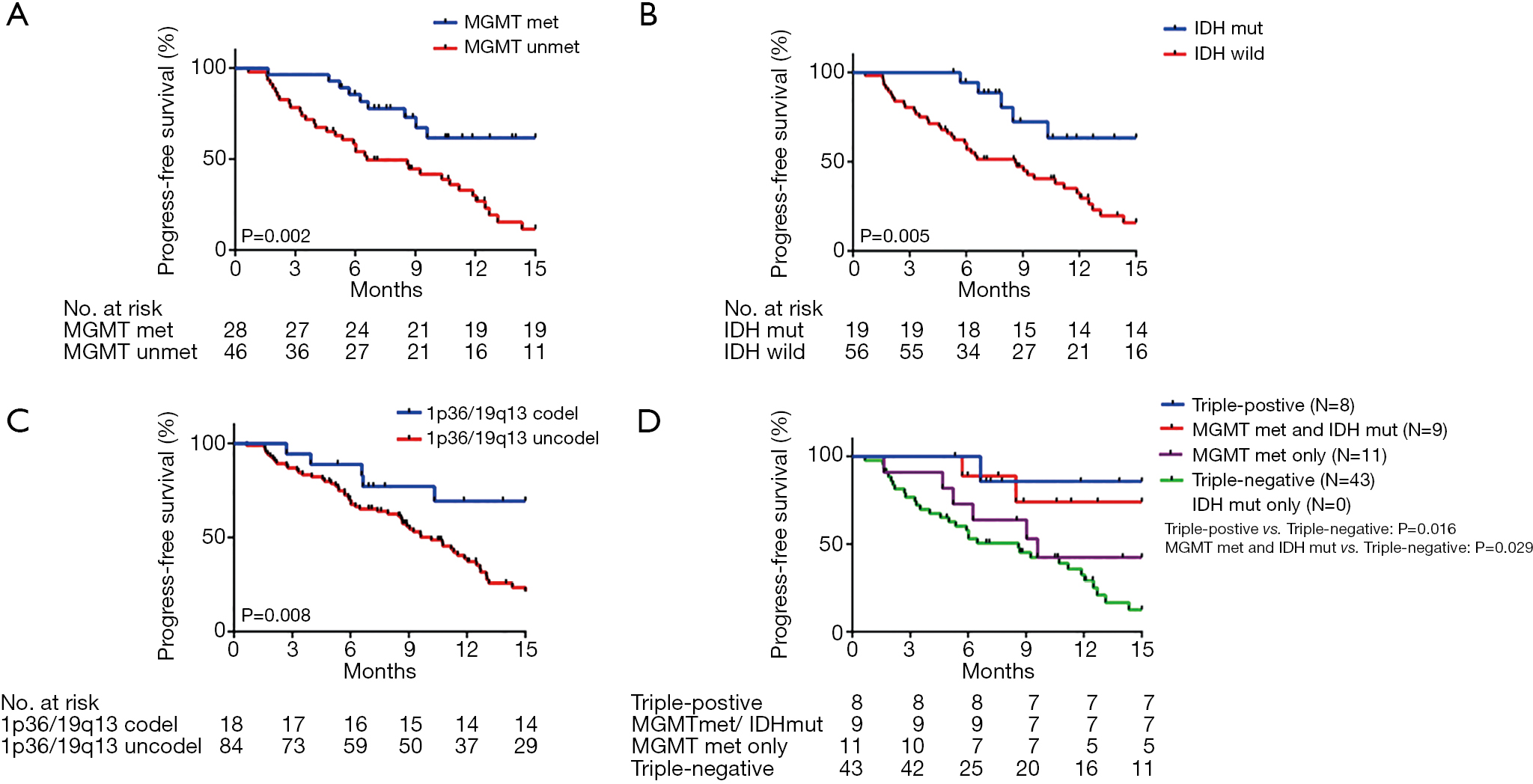 This study demonstrated that IDH mutation, MGMT promoter methylation, and 1p19q co-deletion had better PFS than control groups in high-grade gliomas, respectively. In addition, the MGMT methylation had better survival in OS. The results of our studies were similar to those reported previously (18-20), confirming the premise that different glioma oncobiology, such as IDH1/2 mutation status, MGMT promoter methylation levels, and1p36/19q13 co-deletion, is associated with discriminating favorable prognoses. Moreover, we found that the triple-negative group had poorer PFS in high-grade patients. This suggested that subgroup analysis of IDH mutation, MGMT promoter methylation and 1p19q co-deletion state combination may play a certain role as potential prognostic markers of glioma treatment, which need multicenter and larger sample study to testify.

As previous studies have reported, in newly diagnosed glioblastoma, MGMT promoter methylation is associated with a favorable outcome after temozolomide chemotherapy, which methylated in 45% of patients (14), consistent with the results of dose-dense temozolomide model, confirming the prognostic significance of MGMT methylation (18). Similarly, in low-grade glioma, MGMT-driven molecular classification is a strong predictor for long-term survival, especially when treated with combined radiotherapy and temozolomide (21,22). We demonstrated that MGMT methylation had better OS and PFS in newly diagnosed high-grade diffuse infiltrating gliomas. This result is in line with a previous observation, suggesting a more accurate and individual schedule based on MGMT methylation, and glioma subtype is expected to provide a more reliable tool for standardizing future treatment strategies.

The combination of 2 molecular markers, such as IDH1 mutations and MGMT methylation status, IDH1/2 mutations and 1p/19q co-deletion have been proposed as outcome predictors in patients with gliomas. Wick et al. showed that MGMT promoter methylation is a predictive biomarker for the benefits of alkylating agent chemotherapy in patients with IDH1-wild-type in high-grade malignant gliomas (23). The results confirmed the favorable prognostic value of IDH1 mutation and MGMT methylation in patients with anaplastic astrocytoma treated by temozolomide-based chemoradiotherapy (24).

A further study illustrated the combination of IDH1 mutations, and MGMT methylation outperforms either IDH1 mutations or MGMT methylation alone in predicting survival of glioblastoma patients (25). In addition, combining IDH1/2 and 1p/19q co-deletion makes it possible to stratify anaplastic oligodendroglioma in 3 groups with distinct prognostic features (26). By combination group analysis of 3 molecular markers, our study found that the triple-negative group had poorer PFS in high-grade patients. This finding implied that combination of MGMT methylation, 1p/19q co-deletion, and IDH mutation could play potentially crucial roles in prognosis, based on consideration of the correlation between basal parameters in high-grade glioma.

In summary, as genetic tests have been increasingly utilized in clinical practice, genetic states, including IDH mutation and 1p19q co-deletion, and the most significant marker, MGMT promoter methylation, can be considered as survival indicators in high-grade gliomas. The unfavorable prognostic effect of triple-negative patients supported the clinical value of subgroup analysis in glioma patients with different histologic types and treatment protocols. The combination of IDH mutation and MGMT promoter methylation with or without 1p19q co-deletion show prolonged survival and could be considered as prognostic markers in high-grade gliomas.

We thank Elsevier’s English Language Editing Service for assistance with language editing. Dr. Zhijie Xu is currently a postdoctoral fellow in the Department of Pharmacy, Xiangya Hospital, Central South University, and thanks all members in the Center for Molecular Medicine for their critical comments.

Ethical Statement: The authors are accountable for all aspects of the work in ensuring that questions related to the accuracy or integrity of any part of the work are appropriately investigated and resolved. All procedures performed in studies involving human participants were in accordance with the ethical standards of the research ethics committee of Xiangya Hospital institutional (ChiCTR1800014784). The study outcomes won’t affect the future management of the patients. All patient data were obtained from the medical record system of Xiangya Hospital and have been secured.