Molecular chaperones are a group of molecules that promote protein folding and help maintain its structure and function. Among them, heat shock proteins (HSPs), can regulate cellular homeostasis to help cells survive in lethal conditions, protecting cells from the injury caused by physical and chemical hazards (1-3).

HSPs can be classified, mainly by their molecular weight, into several families such as the small HSP (sHSP) group, and the HSP40 (4), HSP60 (5), HSP90 (6), HSP110 (7), and HSP100 (8) groups. The members are expressed constitutively or inductively. Among these members, HSP70 has the strongest property of cytoprotection (9). Under stress conditions, HSPs will be expressed at a high level, constitutively expressed as Heat shock cognate protein 70 (HSC70), Hsp75, and GRP78 in the endoplasmic reticulum (10). HSC70 is produced as a molecular chaperone protein and constitutes about 1% of the total protein within a cell. Though mainly produced in the cytoplasm, HSC70 is also found in endosomes, lysosomes, and exosomes (11). Three parts constitute the basic structure of HSC70: an ATP-binding domain, a substrate (peptide) binding domain, and a carboxyl-terminal domain (2,12).

HSC70 has been extensively studied for its role as a clathrin-uncoating ATPase during clathrin-mediated endocytosis (13-16). HSC70 maintains protein homeostasis in both normal and stress conditions, and is thus involved in protein folding, translocation, differentiation, degradation, assembly, and disassembly. It also regulates the process of endocytic and autophagy (17,18). HSC70 protects cells from reactive oxygen species (ROS) produced by mitochondria during inflammatory conditions (19). Furthermore, HSC70 acts as a chaperone for class II major histocompatibility complex proteins, and so any alteration of its trafficking may potentially affect antigenic peptide presentation to the receptor of T cells, possibly leading to the regulation of a downstream immune response (20,21). HSC70 is reported to be involved in various diseases, and thus has been targeted to become a biomarker for potential diagnosis and therapeutic targets, and consequently developed to be a novel drug for the treatment of these diseases. Much evidence shows that the Hsp70 family plays a vital role in modulating skeletal muscle homeostasis. HSC70 protein expression has been shown to increase during myotube differentiation (22), but how HSC70 functions during skeletal muscle differentiation remains unclear.

The plasmidYY1 CDS sequence obtained from the NCBI was ligated into FUGW plasmid. The PCR primers used in this study were as follows: forward primer: 5'-GCGGGATCCATGGCCTCGGGCGACACC-3'; reverse primer: 5'-GCGGAATTCTCACTGGTTGTTTTTGGCTTTA-3'.

C2C12 myotubes were fixed by 4% PFA for 30 min, permeabilized with 0.5% Triton X-100 for 10 min, and blocked with 5% bovine serum albumin (BSA) in PBS for 1 h at room temperature. C2C12 myotubes were incubated with anti-MHC diluted in 5% BSA overnight at 4 °C, washed with PBS 3 times, and were then incubated with secondary antibody Cy3-AffiniPure or FITC rabbit anti-mouse IgG (H + L) at room temperature for 2 h. Images were captured by fluorescence microscope (Leica). The proportion of the number of myotubes containing more than 2 nuclei in all cells reflected the degree of myotube differentiation.

C2C12 myotubes were washed twice with ice-cold PBS and collected in RIPA buffer (Sigma) with phosphatase protease inhibitor. The lysates were centrifuged at 13,000 ×g at 4 °C for 30 min. BCA Protein Assay Kit (Beyotime) was used to quantify the protein concentration of the supernatant. Equal amounts of protein samples were separated by 10% SDS-PAGE gel. Proteins were transferred to a polyvinylidene fluoride membrane. The PVDF membranes were blocked in 5% non-fat milk in PBST with 0.1% Tween 20 for 1 h at room temperature and then incubated with primary antibodies diluted in 5% BSA-TPBS overnight at 4 °C. The following primary antibodies were used: YY1 (1:1,000, Proteintech) and GAPDH-HRP (1:5,000, Santa). The PVDF membranes were washed with PBS 3 times. Secondary antibodies including anti-mouse (1:5,000, Multi Sciences) and anti-rabbit (1:5,000, Multi Sciences) IgG horseradish peroxidase-conjugated secondary antibody, were incubated with membranes for 2 h in 5% non-fat milk in TPBS. ECL Chemiluminescent Kit (Thermo Fisher) was used to visualize the antibody-antigen interaction. Finally, chemical luminescence of membranes was detected using a BioRad luminescent imaging system.

Data are expressed as mean ± SEM. Two-tailed Student’s t-test was applied for comparisons between the value of the two groups. One-way ANOVA test was performed to compare multiple groups after Bonferroni’s post hoc test. All analyses were performed using GraphPad Prism 6.0. Differences were considered when criterion significance with P<0.05 (*, P<0.05, **, P<0.01).

To determine the expression changes during myoblast differentiation, we analyzed its level of expression in myotubes differentiated from C2C12 (Figure 1A). The PCR result showed that HSC70 was up-regulated when multinuclear myotubes were formed on the fourth day (Figure 1B). 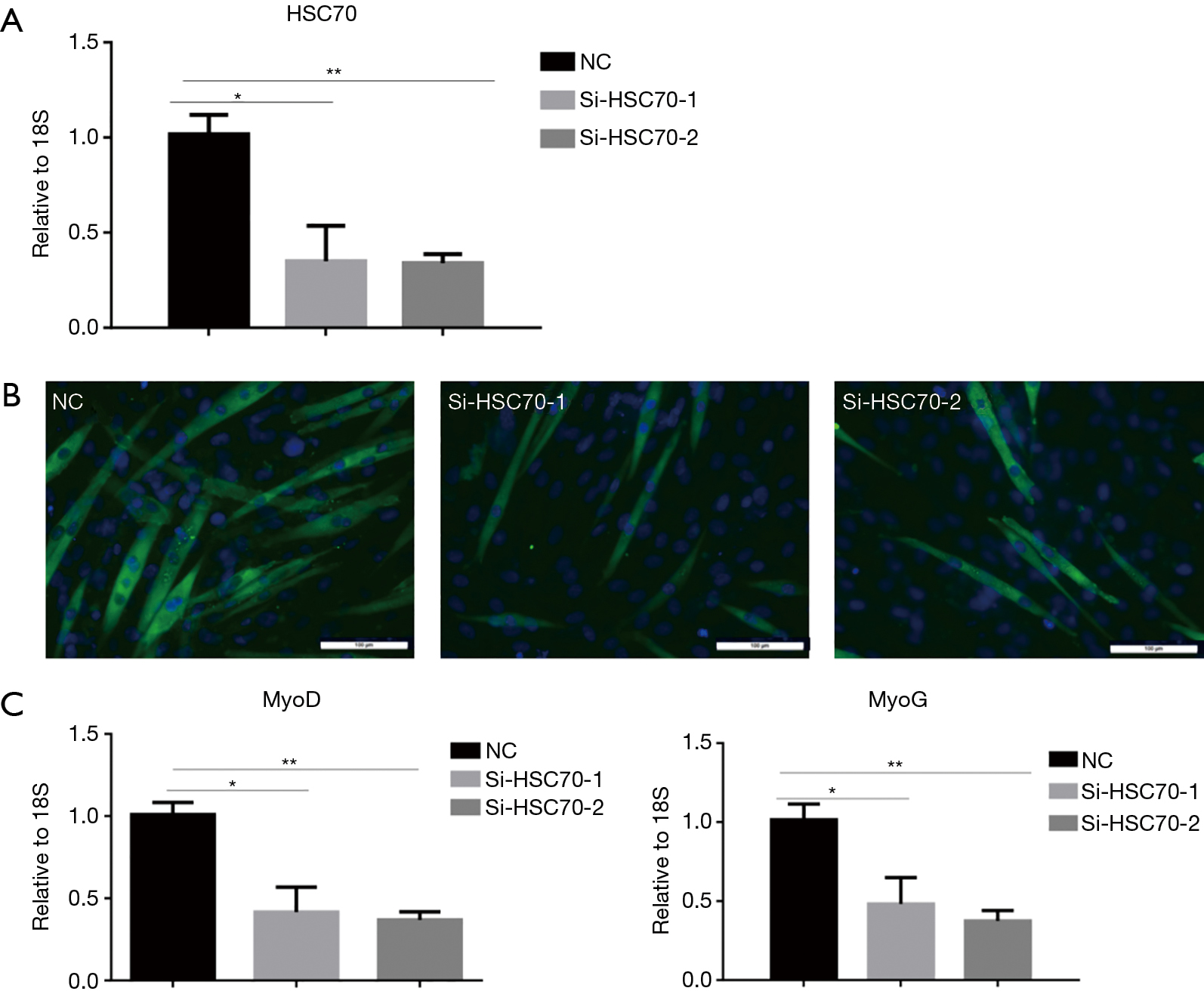 We measured the protein abundance of YY1 after down-regulating HSC70 and found that the expression of YY1 decreased with the down-regulation of HSC70 at 4 days (Figure 3A). Also, we found the YYI protein expression was increased during C2C12 myoblast differentiation (Figure 3B). 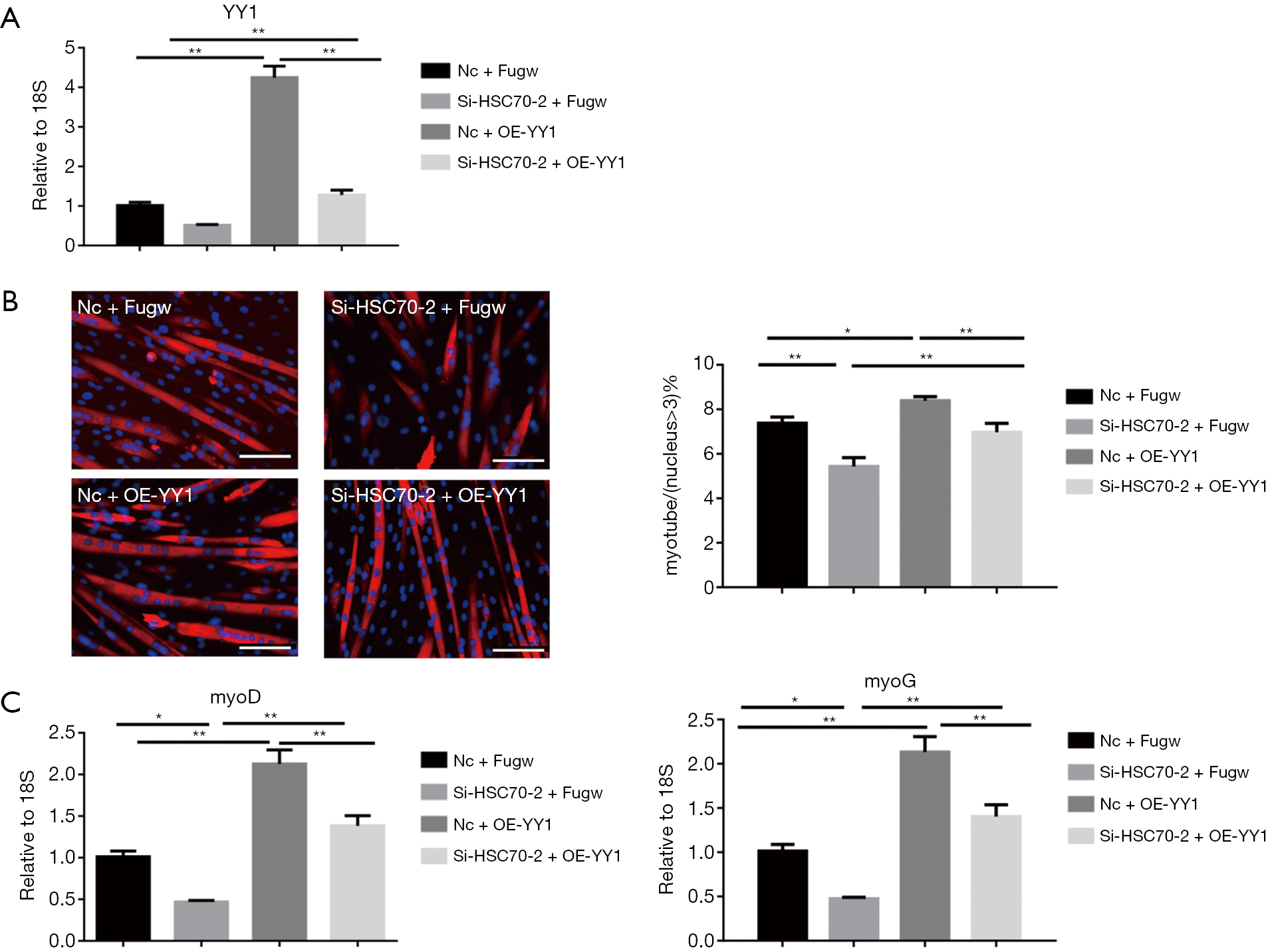 HSC70, as a molecular chaperone, regulates various cellular functions by interacting with many other molecules. It is found to be involved in various diseases and may become a potential biomarker for diagnosis and therapeutic targets for design, discovery, and development of novel drugs (23).

YY1 participates in the lineage differentiation of skeletal cells, and also in several disease pathways such as dystrophic muscle disease (28-30). It is reported that YY1 inhibits vascular smooth muscle cell growth (31). The expression of YY1 has been shown to gradually decreased during C2C12 myoblast differentiation (32), while miRNA-34c has been observed inhibiting myoblast proliferation by targeting YY1 (33). The regulation of miR-1 by YY1 holds functional importance for both C2C12 myogenic differentiation and injury-induced muscle regeneration (34). LncRNA (Yam-1), whose expression YY1 could positively regulate, is downregulated upon differentiation and acts as an inhibitor of myogenesis (29). Lnc-YY1 functions to promote myogenesis by interacting with YY1 (35). Also, YY1 triggers the up-regulation of miR-29b, which contributes to multiple types of muscle atrophy (36). In this study, the overexpression of YY1 protein attenuated the inhibition of myoblast differentiation induced by HSC70 knockdown. YY1 protein expression was increased during skeletal muscle regeneration, while muscle-specific deletion of YY1 led to severe deformity of diaphragm muscle formation (37). To our knowledge, the cooperation of co-chaperones enables HSC70 to fully perform its function, so the specific mechanism of HSC70 and YY1-induced myoblast differentiation should be further explored, and hopefully, identified in the future.

In conclusion, our study shows that HSC70 is critical for C2C12 myoblast differentiation, a process also regulated by YY1 protein. This finding suggests that HSC70 might become a novel therapeutic target of muscle-related disease.

Funding: This work was supported by grants from the National Natural Science Foundation of China (ID:81701218 to Lei Chen, ID:81873774 to Yan Yu), the Sailing Program from the Shanghai Science and Technology Commission (ID:16YF1410300 to Lei Chen), the Tongji Hospital of Shanghai (ID: HBRC1607 to Lei Chen, KPB1608 to Yeqing Sun), and Guizhou Provincial People’s Hospital Doctor’s Fund [ID: GZSYBS(2017)12 to Tao Guo].

Ethical Statement: The authors are accountable for all aspects of the work in ensuring that questions related to the accuracy or integrity of any part of the work are appropriately investigated and resolved. This article does not involve any patients or animals, and the ethical review is exempted.