More than just a screen to liberate from mechanical ventilation: treat to keep extubated?

As a life-support modality, mechanical ventilation (MV) has been utilized to support ventilation and oxygenation for patients with respiratory compromise for over five decades. While MV saves lives, it is associated with considerable and relevant clinical complications such as ventilator-induced lung injury (VILI), ventilator-associated events (VAE), and ventilator-induced diaphragmatic dysfunction (VIDD) (1,2). Thus, efforts to liberate patients from MV as early as possible are common and play a key role in clinical outcomes (2,3). The task to liberate a patient from MV is complicated, as premature extubation has been reported to be harmful. In fact, the mortality for patients who failed initial extubation and required subsequent reintubation has been reported to be 4–9 times higher than those successfully extubated (4-7). In contrast, delayed extubation unnecessarily extends the duration of MV, increasing the likelihood of MV complications. Therefore, identifying the optimal time to liberate patients from MV is crucial.

Spontaneous breathing trials (SBT) were broadly introduced by Esteban et al. in 1995 as a tool to assess patients’ readiness to be weaned from MV. Their study demonstrated that daily SBTs were superior to other traditional weaning strategies used at that time (8). Since then, SBTs have become the standard method used during the process of MV liberation (9). While common in clinical practice, there is no consensus on the optimal application of SBTs. In a recent study completed in the United Kingdom, 364 patients were enrolled from 41 different facilities. In that study, 51.1% of SBTs were performed with continuous positive airway pressure (CPAP), 32.7% were pressure support ventilation (PSV), and 11.3% were placed on a T-piece (10). In a study by Jaber et al. with 1,453 patients enrolled from 26 centers in France, SBTs were performed on 1,160 patients, of whom 43.8% were placed on a T-piece, 38.7% used PSV with positive end expiratory pressure (PEEP) and 15.8% used PSV without PEEP (7). Another investigation of 630 patients in 8 North American ICUs showed that the utilization of ventilator with PSV mode was the prevalent modality to implement SBT. Interestingly, the MV settings varied by site as 6 out of 8 (75%) centers preferred PEEP at 5 cmH2O, while the other two centers preferred PEEP at 0 cmH2O. Also, 6 of 8 (75%) of those centers preferred a PS setting of 5–6 cmH2O while two centers preferred PS at 0 cmH2O (11).

Efforts to understand the best method of SBT have been made over time. Esteban et al. compared PSV with T-piece in a randomized controlled trial (RCT) and found that SBTs done with PSV had higher success rates than T-piece (86% vs. 78%, P=0.03) (4). In a physiologic meta-analysis by Sklar et al., work of breathing during SBT with T-piece trials or CPAP at 0 cmH2O was evaluated and found to be similar to work of breathing after extubation. It was also noted, unsurprisingly, that PSV reduced respiratory workload (12). This report might help explain the results from a meta-analysis by Burns et al. assessing outcomes with different SBT modalities (PSV vs. T-piece). Their study demonstrated that patients were more likely to pass a SBT when PSV was utilized (13).

Duration of SBT has also been investigated. In a recent study completed in 17 Spanish ICUs with 470 patients enrolled, 91% received SBT via T-piece. Approximately one third of the group received SBT via T-piece for 30, 60, and 120 minutes, respectively (14). Liang et al. reported incorporating a 120-minute SBT with PSV where 352 patients successfully completed 30 minutes, however at 120 minutes, 41 (11.6%) of those 352 failed the SBT (15). This suggests that patients are more likely to fail SBT when the length of the trial is longer; for example, 120 minutes instead of only 30 minutes. Despite progression in the understanding of SBTs over time, some debate still exists regarding method and duration.

In 2019, Subirà et al. published the results of their randomized clinical trial in JAMA that evaluated two different SBT strategies, PSV for 30 minutes and T-piece for 120 minutes. The authors provided some insight on whether a less demanding approach to SBT (30-minute PSV) or a more demanding approach (120-minute T-piece) was better. Using successful extubation (free from MV 72 hours after first SBT) as the outcome, they reported that the PSV approach was advantageous in terms of higher rates of successful extubation. While this study provides clinicians with more clarity in terms of the application of SBT, there are some important items to consider. First, in the 30-minute PSV group, 142 patients (24.7%) received prophylactic noninvasive ventilation (NIV) or high-flow nasal cannula (HFNC) immediately after extubation, which was determined by physicians prior to extubation. In contrast, only 108 patients (18.7%) received prophylactic NIV or HFNC after extubation in the 2-hour T-piece group (16). The P value of 0.01 between groups indicates that the baseline data is not comparable. Both NIV and HFNC have been shown to reduce reintubation in patients who successfully completed a SBT (17-20). Therefore, the higher proportion of prophylactic intervention with NIV or HFNC in the 30-minute PSV group in Subirà et al.’s study may have reduced the need for reintubation, resulting in the reported similar reintubation rate compared with 2 h T-piece group. This raises concern that the 30-minute PSV SBT may not be superior to a 2-hour T-piece if prophylactic interventions of NIV or HFNC were not used.

Another concern is that the use of NIV or HFNC to treat post-extubation respiratory failure, namely “rescue therapy”, was not predefined in Subirà et al.’s study. Post-extubation respiratory failure occurred in 110 patients (20.7%) in the PSV group and in 103 patients (21.2%) in the T-piece group. Patients who received HFNC and NIV to treat post-extubation respiratory failure as rescue therapy had greater success avoiding reintubation (57.4% and 60.4%, respectively), compared to patients receiving conventional oxygen therapy (19.7%; P<0.05) (16). It is difficult to distinguish how many patients received rescue therapy by NIV or HFNC and how the treatment (NIV or HFNC) was determined. These data would be helpful to understand whether 30-min PSV SBT is superior to 2-h T-piece weaning trial (Figure 1). Nonetheless, it appears prophylactic and rescue use of NIV and HFNC vs. conventional O2 may have a role in further reducing reintubation of “simple” weaning patients (21,22). 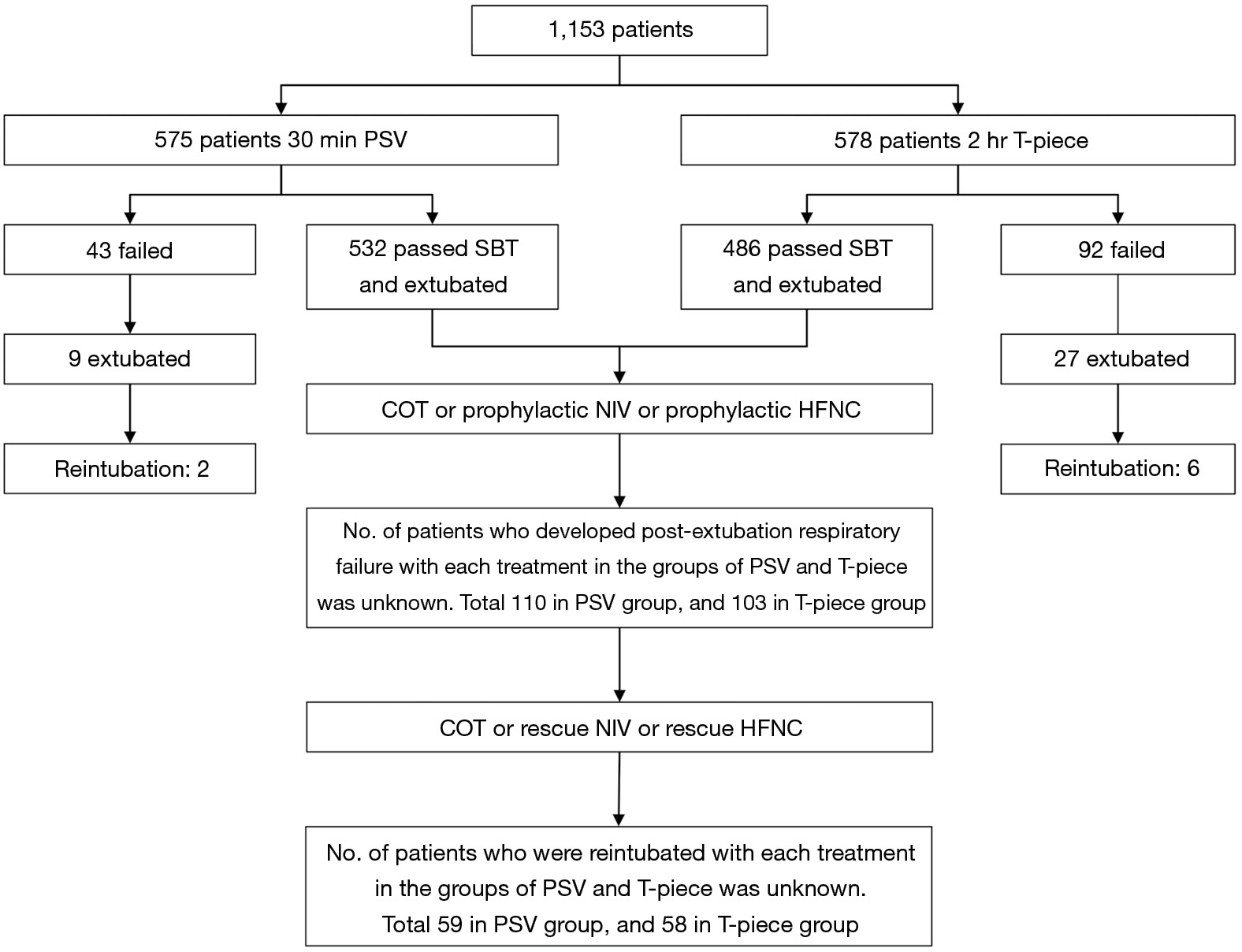 Figure 1 In the Subirà et al.’s study, among the 575 patients who were assigned to receive 30 min PSV SBT, 532 patients passed SBT and were extubated. The remaining 43 patients failed SBT, however 9 were still extubated. In those 541 extubated patients, 51 of them received prophylactic NIV and 91 received prophylactic HFNC. The exact number of patients who received prophylactic NIV and HFNC were unknown in the 532 patients who passed the SBT and were extubated. One hundred and ten in 532 patients developed post-extubation respiratory failure, but the number of patients in the groups of COT, prophylactic NIV and HFNC were unreported. For those 110 patients, some might have changed respiratory support devices, such as from COT to HFNC or NIV, or from HFNC to NIV, as a “rescue therapy”, 59 patients ended with reintubation. The number of patients in those rescue treatment groups were unknown. Similar situation also exists in the group of 2-hour T-piece SBT. NIV, noninvasive ventilation; HFNC, high-flow nasal cannula; COT, conventional oxygen therapy.

It needs to be emphasized that SBTs only assesses respiratory function, regardless of the modalities used during SBT. It does not assess upper airway patency, secretion characteristics, and patient’s ability to protect airway. As such, Epstein et al. classified extubation failure as airway and non-airway failure (23), in which the incidence of extubation failure due to airway failure was 44–74% (7,14,16,18). The inability to manage secretions is one of the main reasons for reintubation, suggesting that adequate secretion clearance plays an important role in avoiding reintubation. Wang et al. evaluated secretion clearance methods and their impact on extubation success with a chest physiotherapy treatment protocol for patients whose average MV duration was 7 days. The protocol included chest wall mobilization, secretion removal, cough function training, early mobility, manual hyperinflation and inspiratory muscle training. Compared to a historical control group of patients with conventional care, the patients who received the physiotherapy during and after extubation had lower reintubation rates (8% vs. 16%, P=0.01), after successfully passing SBT (24). These findings suggest a role for early assessment of airway patency, secretion clearance, and airway protection abilities with implementation of physiotherapy prior to any extubation.

In conclusion, the key for successful extubation extends beyond screening patients for extubation readiness, to treating patients who might benefit from continued support post-extubation. More work is needed to understand when and which prophylactic measures such as NIV, HFNC and aggressive physiotherapy can reduce risk of reintubation.