Inflammatory bowel disease (IBD), an entity inclusive of Crohn’s disease (CD) and ulcerative colitis (UC), is described as a relapsing-remitting inflammatory disorder of gastrointestinal (GI) tract which often leads to grave complications and significantly affects the quality and outcomes of life. Given the propelling policies with respect to the therapeutic use of cannabis, experts are progressively incited with inquiries concerning its therapeutic role in the GI diseases. The role of cannabis (marijuana) in reducing the inflammation has been well documented in the literature (1). Very few studies have reported the impact of cannabis use on symptom control and quality of life; however, most of them were statistically underpowered and the data on the outcomes and prognosis in IBD patients is still scarce and inconsistent (1,2). The potential beneficial role of cannabis in the IBD patients is argued owing to the anti-inflammatory effects of cannabinoids (3,4). However, it remains unclear that how cannabis modulates the GI tract physiology and influence the outcomes in IBD patients on a large scale. Therefore, we aimed to assess the impact of cannabis use on the outcomes in patients with CD and UC beyond just the symptomatic control using the largest nationwide propensity-matched cluster of hospitalized patients irrespective of the duration of the usage.

Our study cohort was sought from the National Inpatient Sample (NIS) dataset from January 2010 through December 2014, which is produced by the Agency for Healthcare Research and Quality as a part of Healthcare Cost and Utilization Project (HCUP). The NIS is the largest open access all-payer inpatient dataset in the United States (US) (https://www.hcup-us.ahrq.gov/nisoverview.jsp). The NIS contains data for more than 35 million weighted discharges per year and up to 25 diagnoses and 15 procedures on each hospitalization are coded by the International Classification of Diseases, 9th revision, Clinical Modification (ICD-9 CM). Since it is a publically accessible dataset, our study was exempt from an Institutional Review Board (IRB) review.

In addition to unmatched analysis, a propensity-score matched analysis was performed using a multivariate regression adjusting for the demographics, co-existing comorbidities and other potential confounders on a caliper width of 0.01, and then categorical and continuous variables were compared in the unmatched and matched cohorts using Chi-square test and Student’s t-test, respectively. Discharge weights were applied to attain nationwide estimates in addition to strata and cluster designs. A two-tailed P value of <0.05 was considered a threshold for clinical significance. Social Sciences software (SPSS), version 22.0 (IBM Corp., Armonk, NY, USA) was used for all analyses.

As shown in the Table 1, the propensity-matched clusters for CD was comprised of 2,999 patients in the cannabis group and 3,003 patients in the non-cannabis group. CD-cannabis users were more often younger (mean 34.0 vs. 36.3 years; P<0.001) patients, admitted non-electively (94.4%). Overall, white patients dominated both the CD-cannabis (65.9%) and non-cannabis groups (64.9%). African-American (24.6%) population in CD-cannabis cohort surpassed that of non-cannabis cohort (23.9%). Urban-teaching hospitals encountered the greatest number of CD patients having used cannabis (61.5%) with the predominance in the South region (38.8%). Among all the in-hospital complications (primary endpoints) noted (Table 2), colorectal cancer prevalence was lower (0.3% vs. 1.2%, P<0.001) in the CD-cannabis group as well as the frequency of anemia (25.6% vs. 30.1%, P<0.001). A lower predisposition for the need of parenteral nutrition was also noticed in cannabis group (3.0% vs. 4.7%, P=0.001) compared to the non-cannabis group. However, complications like hypovolemia (1.2% vs. 0.5%, P=0.004), active fistulizing disease or intraabdominal abscess formation (8.6% vs. 5.9%, P<0.001) and unspecified lower GI hemorrhage (4.0% vs. 2.7%, P=0.004) were higher in the CD-cannabis group. No significant difference was observed when the two groups were compared for complications like fluid and electrolyte disorders, stricturing diseases, intestinal obstruction, malnutrition, Clostridium difficile infection, blood transfusion, small intestinal and colorectal resection. While considering the secondary endpoints in the CD cohort, it was found out that higher numbers of cannabis users (87% vs. 85.9%, P<0.001) were disposed-off with routine treatment protocols as compared to non-cannabis users. A significantly shorter mean LOS was noted (4.2±3.9 vs. 5.0±5.3, P<0.001) in CD-cannabis group alongside a lesser financial cost per hospital stay (mean $28,956 vs. $35,180, P<0.001). 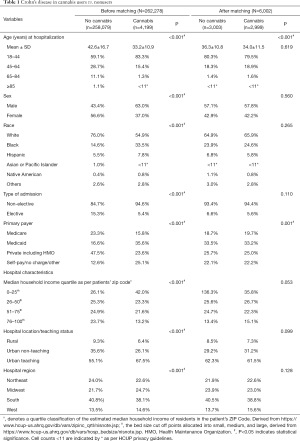 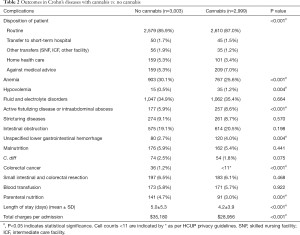 Table 2 Outcomes in Crohn’s diseases with cannabis vs. no cannabis
Full table

For UC, there were 742 patients in the cannabis group and 739 patients in the non-cannabis group, after propensity-matching (Table 3). Like CD, white patients’ number (60.3%) dominated over the other ethnicities with more male patients in the UC-cannabis group. Among the cannabis users, 92.5% patients were hospitalized non-electively; with majority of patients being treated in urban-teaching hospitals (58.2%). While considering the complications (Table 4), the frequency of postoperative infections were lower (<11 vs. 3.4%, P=0.01) whereas fluid and electrolyte disorders (45.1% vs. 29.6%, P<0.001) and hypovolemia (2.7% vs. <11, P=0.003) were higher in cannabis users. No other complications like anemia, unspecified lower GI hemorrhage, malnutrition, C. difficile infection, the need for blood transfusion or parenteral nutrition were statistically significant enough to be compared between the two groups. Patients with UC in the cannabis group also faced significantly less financial burden ($30,393 vs. $41,308, P<0.001) with a shorter mean LOS (4.3 vs. 5.7 days, P<0.001). 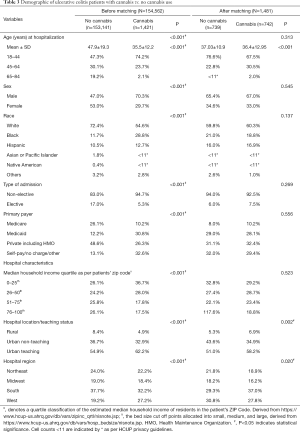 Table 3 Demographic of ulcerative colitis patients with cannabis vs. no cannabis use
Full table 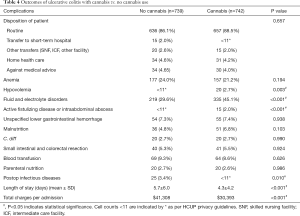 Table 4 Outcomes of ulcerative colitis with cannabis vs. no cannabis use
Full table

To our knowledge, this is the first study analyzing the in-hospital outcomes of CD and UC with cannabis use on a large-scale. Naftali et al. claimed that nearly 45% of CD patients accomplished a complete remission {Crohn’s Disease Activity Index (CDAI) score: <150 after 2 months of treatment} while nearly 90% of the patients showed symptomatic improvement (reduction of the CDAI score by at least 100 points), better quality of life (at least 50 points as measured by the SF-36), steroid-free benefits and without any significant side effects in cannabis group as compared to placebo group (10), which was owed to therapeutic anti-inflammatory effects of cannabinoids (1,2). Another study by Naftali et al. evaluated the efficacy of cannabis usage in UC patients. They claimed that cannabis use significantly induced clinical and endoscopic improvements of UC in this randomized controlled trial which was evidenced by a reduction in the Disease Activity Index (DAI) and Mayo endoscopic scores in the cannabis users (11). It is well known that inflammation promotes tumorigenesis which is the primary mechanism to develop a colon cancer in CD patients (12). Therefore, anti-inflammatory effects of cannabinoids might be the reason for the lower incidence of colon cancer in the CD-cannabis group in our study. It is recognized that the cannabis impedes the thrombin-induced clot formation (13) and can augment thrombolysis (14), which could be the possible explanation for the higher incidence of unspecified GI bleeding in the CD-cannabis group. For all the patients with UC, however, no significant difference was found between the two groups. We also found a lower incidence of anemia in CD patients who used cannabis, which is in contrast to the literature where it is shown that nearly 70% of IBD in-patients are diagnosed with anemia (15), the most common comorbidity and complication in the IBD patients due to chronic and sometimes acute GI bleeding. For UC, there was no significant difference between cannabis users vs. non-users.

Cannabis is said to mediate symptomatic hypotension via the CB1 receptor as evidenced by some studies (16), a possible explanation for the increased prevalence of hypovolemia observed in the CD-cannabis group. Consistently, hypovolemia and fluid electrolyte disorders were seen more frequently in cannabis users as compared to non-users in the UC cohort. Through immune-modulation, cannabis can have strong anti-inflammatory effects in the GI tracts (1,17), however, active fistulizing disease or intraabdominal abscess formation was significantly higher in CD-cannabis users.

In UC-patients, hypovolemia and fluid and electrolyte disorders were higher in the cannabis users, although this finding was non-significant in the CD-cannabis patients. One possible explanation is the development of cannabis hyperemesis syndrome (CHS) in chronic cannabis users and the resultant hypovolemia and electrolyte disorders associated with it, which was not extensively investigated in our study (18,19). Fewer cannabis users in the CD group required the parenteral nutrition, though no comparison could be drawn in the patients with UC. The high quality of life and symptomatic improvement in IBD patients with cannabis use could be an explanation for better oral intake and less required parenteral nutrition. However, large-scale studies are warranted to overcome few of the issues in this underpowered retrospective study and to help establish the clear inferences. Earlier symptomatic improvement is reported in the literature with cannabis use in IBD patients (1), which may possibly be the reason for a shorter hospital stay and a significantly lesser financial burden in cannabis users in both groups.

A few major limitations of this study should be taken into consideration while comprehending the results. Since, the NIS is a retrospective inpatient dataset, we could not assess the duration, mode of administration, dosage of cannabis use, and follow-up of the study cohort. Although we have incorporated previously used and validated codes, administrative ICD-9 CM coding errors are possible which might underestimate or overestimate the study population to some extent. The previous studies have considered the quality of life as the primary objective, which we could not study in this analysis. The NIS does not specify the medication history of the patient, which may play a major role in such chronic ailments. These limitations can be overlooked in contrast to the advantages of the largest dataset while assessing the impact of the cannabis use on inpatient IBD outcomes.

This retrospective propensity-matched analysis revealed lower colorectal cancer prevalence, blood transfusion and parenteral nutrition requirements in the cannabis users with CD and lower postoperative infections were observed in the patients with UC who used cannabis. Shorter hospital stays and lower hospital charges were also noted in the patients using cannabis in both groups. On the contrary, among patients with CD, complications like hypovolemia, active fistulizing disease or intraabdominal abscess formation and unspecified lower GI hemorrhage were higher in cannabis users whereas the UC cohort with cannabis usage demonstrated higher frequency of hypovolemia and fluid-electrolyte disorders. To our knowledge, this is the largest and the first ever study assessing the in-hospital outcomes in IBD patients beyond symptom control and quality of life. However, considering the retrospective nature of the study and limitations, future statistically powered well-designed and placebo-controlled prospective studies are warranted to endorse our study findings. Nevertheless, these findings certainly are the foundation for clinicians and policymakers to design forthcoming studies and possibly draw conclusions regarding a clear therapeutic role of cannabis in Crohn’s and UC.

Conflicts of Interest: H Goyal has stock holdings in Rimrock Gold Corp., Tauriga Sciences and SinglePoint Inc. The other authors have no conflicts of interest to declare.