Propensity score analysis has been widely used in medical literature. Propensity score is the probability of treatment assignment conditional on the baseline covariates. Conditional on propensity score, the baseline covariates are expected to be balanced between treated and untreated groups. However, the imbalances of baseline characteristics between two or more treatment groups can still exist if the statistical model used to calculate the propensity score is mis-specified. Thus, it is of vital importance to appropriately carry out balance diagnostics after propensity score matching (PSM) and report the results of the diagnostic analysis. It has been showed that the reporting quality of observational studies using PSM was suboptimal (1-4). Among others, one of the key areas to be improved is that the balance diagnostics were not fully conducted and/or reported in these studies. For example, only 41% of PSM studies reported the balance of baseline covariates between treated and untreated subjects in acute care surgery literature, and only 13% used correct statistical methods to assess balance (5). While there are several excellent papers on how to report balance diagnostics after PSM (5,6), there is a lack of accessible discussion on how to conduct balance diagnostics after PSM using freely available software, such as R. This special paper aimed to serve as a tutorial on the statistical methods for the assessment of covariate balance after PSM. R code for the implementation of covariate balance check is given and explained in a step-by-step fashion. Intended audiences of this article are presumed to have basic knowledge on R programming. This manuscript could be divided into following sections: (I) simulation of a working example for the illustration purpose; (II) PSM for the simulated dataset; (III) standardized mean difference (SMD) for assessing covariate balance after matching; (IV) other quantities such as variance ratio and prognostic score to assess covariate balance; and (V) possible solutions to re-specification of the propensity score model when there is evidence of imbalance.

A simulated dataset is used for the illustration purpose. First, we create a function named psSim(), which simulates a dataset with covariates, treatment group and mortality outcome. 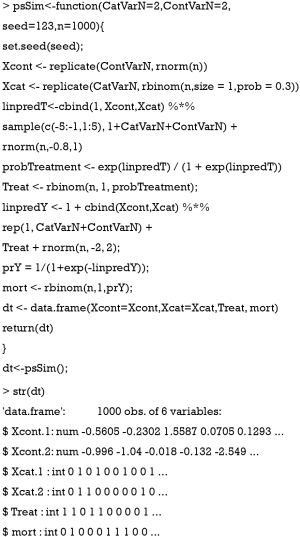 The returned object of the psSim() function is a data frame containing 6 variables. Xcont.1 and Xcont.2 are numeric variables; and Xcat.1 and Xcat.2 are categorical variables with levels 0 and 1. Note that only 4 variables are generated, but there can be much more baseline variables in real practice. Treat represents the assignment of treatment groups. mort is the vital status denoted as 1 for dead and 0 for alive.

Next, we examine the balance of covariates between treated and untreated groups. The tableone package (v0.9.3) will be used to compare baseline characteristics between the two groups. 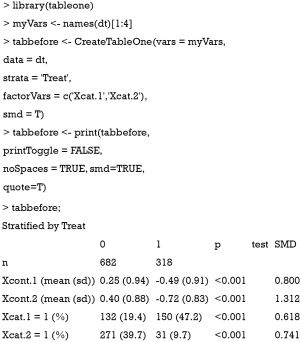 The results show that there are significant differences in variables Xcont.1, Xcont.2, Xcat.1 and Xcat.2 with SMD greater than 0.1, a threshold being recommended for declaring imbalance (7). SMD is given by the following equation (8):

are sample mean for the treated and control groups, respectively;

are sample variance for the treated and control groups. It is noted that the difference between two groups is no long dependent on the unit of measurement and thus variables with different types of measurements can be compared on SMD scale.

Similarly, SMD for dichotomous variable is given by (6):

are prevalence of dichotomous variables in the treated and control groups, respectively. Again, a SMD greater than 0.1 can be considered as a sign of imbalance.

PSM can be easily done with the MatchIt package (v3.0.2).

In the example, all covariates are used to predict the treatment group. The nearest neighbor (NN) matching algorithm goes through the potential matches in the untreated samples and selects the closest unmatched subject in terms of propensity score to match the treated subject (9). However, the NN matching is at risk of bad matches when the closest neighbor is far away. The caliper imposes a tolerance level on the maximum PS distance. Only NNs within the caliper size can be matched. The caliper argument in the matchit() function can be used to define a caliper.

SMD is probably the most widely used statistic for the assessment of balance after PSM, because it is easy to compute and understand. The cobalt package (v3.4.1) is excellent in calculating SMD and other useful quantities.

Variable with the greatest mean difference

The above output shows that when setting the threshold for mean difference to 0.1, all covariates were balanced after PSM. The (standardized) difference in means between the two groups after matching is shown in the third column of the first table. Note that the distance measure generated by matchit() is automatically included. By default, the bal.tab() function calculates the raw difference in proportions for binary covariates (X1.1 and X2.1), instead of the SMD. The following two tables show the summary statistics for the matching results. The last table shows number of subjects before and after matching in the control and treated groups.

The distribution of continuous and categorical variables stratified by treatment group before and after matching can be visualized with the bal.plot() function. 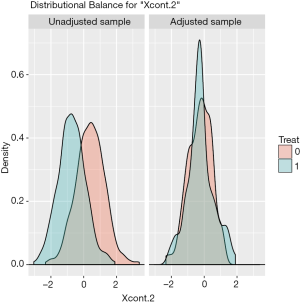 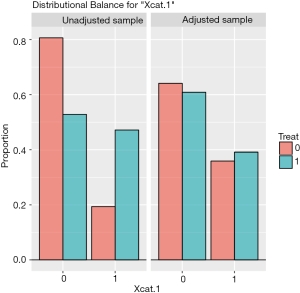 Figure 2 Histogram showing the balance for the categorical variable Xcat.1.

Covariate balance for all variables can be displayed in a so-called Love plot. Furthermore, the variable name can be modified to meet the publication standard.

Variable names such as Xcat.1 and Xcont.2 are not meaningful for subject-matter audience, thus we change the names to “Age”, “WBC”, “Gender” and “Surgery”. Figure 3 shows the mean difference in all variables between treated and control groups before and after PSM. Two dashed vertical lines indicate the threshold within which the balance is considered to be achieved. 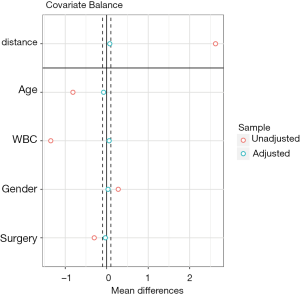 Sometimes, investigators may want to compare difference between treated and control groups after PSM. The tableone package (v0.9.3) can do the work and produce high quality tables. 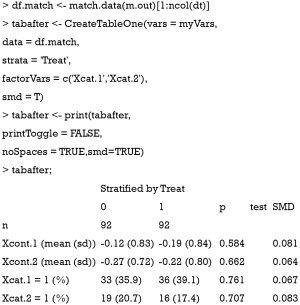 Also note that the mean difference obtained by CreateTableOne() function is different from that obtained by bal.tab() function. In fact, The computed spread (variance) bal.tab() uses is always that of the full, unadjusted sample (i.e., before matching), while the CreateTableOne() computes spread using the matched sample. The rationale for the use of the standard deviation of the unmatched sample is that it prevents the paradoxical situation that occurs when PSM decreases both the spread of the sample and the mean difference, yielding a larger SMD than that prior to adjustment, even though the matched groups are now more similar. By using the same standard deviation before and after matching, the change in balance is independent of the change in mean difference, rather than being conflated with an accompanying change in standard deviation (10). Furthermore, while the CreateTableOne() reports SMD for categorical variables, bal.tab() reports absolute difference for the categorical variables.

Below we show the calculation of SMD in both functions by using Xcont.1 as an example. SMD is computed by using standard deviation of the matched sample, as that computed in CreateTableOne():

SMD is computed using standard deviation of the treated group in the unmatched sample, as that computed in bal.tab():

Although significance testing is commonly used to assessing balance in observational studies, it is inappropriate for the following reasons. The sample size of the study population after PSM is reduced, and thus the power to detect statistical significance is also reduced. Non-significance after PSM may simply due to the reduced sample size rather than improved balance. In other words, the statistical insignificance can occur when we randomly drop more number of controls (11). Also, it should be pointed out that evaluating imbalance using hypothesis testing and the corresponding p-value should be used with caution, as spurious statistically significant difference can be detected due to multiple testing on the covariates even when there is no true difference between the distribution of these covariates.

Variance is the second central moment about the mean of a random variable. It reflects one aspect of the property of a probability distribution. An ideal balance after PSM is that all central moments are the same between the treated and untreated groups. For continuous variables, the variance should also be compared in the matched sample (12). Variance ratio can be displayed with the bal.tab() function. A variance ratio of 1 in matched sample indicates a good matching, and a variance ratio below 2 is generally acceptable.

Variable with the greatest variance ratio

It is noted from the above output that the SMD of the prognostic scores is −0.0007, which indicates a balanced sample.

If there is evidence of imbalance between treated and control groups (i.e., SMD >0.1) after PSM, investigators may need to check for the mis-specification of the PS model. There are several conditions that must be fulfilled before fitting a logistic regression model such as linearity and additivity.

Linearity assumption can be checked by plotting residual against each individual numeric variable.

The above code first loads the car package (v2.1-6), then refit the model used for the estimation of propensity score. The residualPlots() function generates plot for assessing linearity (Figure 4). The linearity assumption is fulfilled when the points on the plot are randomly scattered around zero, so assuming that the error terms have a mean of zero is reasonable. The vertical width of the scatter doesn’t appear to increase or decrease across the fitted values. If the smoothed curve of the scatter points takes a curved pattern, some higher orders terms or cubic spline function can be added for the specific variable in fitting the propensity score model. Assessing linearity is just an example to improve the propensity score model, Austin [2011] indicated that: “one can modify the propensity score by including additional covariates, by adding interactions between covariates that are already in the model, or by modeling the relationship between continuous covariates and treatment status using nonlinear terms.” (14). Furthermore, machine learning algorithms such as classification and regression trees (CART), random forest and neural networks can be employed to improve the specification of the propensity score model (15). These methods account for interaction and non-linearity without the need to explicitly specify them. Simulated study demonstrated that these advanced methods can help to improve balance between treated and untreated groups (16). 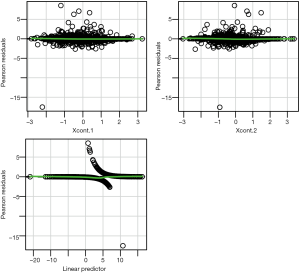 The paper reviewed several methods to assess covariate balance after PSM. SMD is the most widely used quantity and is more comprehensible for subject-matter audience. Statistical inference is also used in the literature, but it is flawed that statistical insignificance after PSM is only a reflection of reduced sample size. Variance is the second central moment about the mean of a random variable. Since the treated and control groups are assumed to be from the sample population after PSM, the variances of the two should be the same. Thus, a variance ratio approaching 1 is the evidence of balance. Prognostic score is the predicted probability of outcome under the control condition, and SMD of prognostic score is found to be a good quantity in assessing balance.

We would like to thank Noah Greifer for his valuable comments to improve the manuscript.