Scar tissue formation around muscles, joints, tendons, and ligaments is often characterized by limited function, swelling, and pain (1). This abnormal tissue can form as a result of immobilization, overuse injuries, acute or chronic trauma, and other reasons (2-5); and can lead to chronic inflammation and tendinopathies (5-7). Additionally, scar tissue formation can occur after surgical procedures such as total knee arthroplasty and shoulder surgery, which can lead to stiffness and decreased motion (8-10). Regardless of the etiology, the pain and stiffness associated with these conditions can lead to patient dissatisfaction and a poor quality of life (11-13).

A number of traditional treatments are currently used to treat these problems, including oral non-steroidal anti-inflammatories, corticosteroid injections, cryotherapy or heat therapy, stretching, eccentric exercises, neuromuscular stimulation, and dynamic braces. If these treatments are unsuccessful, more invasive procedures such as manipulations or open surgery may be required (4,14,15). In order to avoid surgery, less invasive treatments are being introduced (5,16,17). Astym® therapy (Performance Dynamics, Muncie, Indiana), is a relatively new noninvasive therapeutic approach that addresses soft-tissue dysfunction by relying in part on the use of cellular mediators and growth factors to assist in activating scar tissue resorption, stimulating tissue turnover and regenerating soft tissues. This therapy utilizes handheld instrumentation, applied topically, to locate underlying dysfunctional soft tissue and then transfer particular pressures and shear forces to the dysfunctional tissue through specific protocols and patterns developed from scientific and clinical study. The instrumentation is designed to assess the presence of dysfunctional tissue by amplifying the tactile sensation of the underlying texture of the soft tissues in order to provide the treating clinician with indications where rough or improperly organized tissue is located. Once an area of potential dysfunctional tissue is located, the clinician applies appropriate pressures and shear forces to that tissue to initiate a reparative cellular response in dysfunctional tissue (1,5,18,19). At the cellular level, Astym treatment has been shown to stimulate a regenerative response via stimulating the recruitment and activation of fibroblasts, which produce fibronectin, and thereby helps to facilitate soft tissue healing and remodeling (20-23). Although this therapy utilizes instruments topically, it is a distinctly different approach than Tooling/Scraping, which is also referred to as Instrument Assisted Soft Tissue Mobilization (“IASTM”). The methods and results are quite different from Astym therapy, and IASTM methods are often not well-tolerated by patients. IASTM methods use tooled cross friction massage to mechanically break apart the tissue, whereas, Astym therapy engages the regenerative mechanisms of the body aiming to repair damaged tissue and resorb scar tissue.

While randomized, controlled clinical trials and other clinical and scientific studies demonstrate the safety and effectiveness of Astym therapy on particular musculoskeletal disorders, there are no reports encompassing the gamut of the literature on this therapeutic intervention. Therefore, the purpose of this study was to review the published peer-reviewed results of Astym therapy on various parts of the body. Specifically, we evaluated the use of this therapeutic method on disorders of the: (I) knee; (II) upper extremity; (III) hamstrings muscles; and (IV) ankle and Achilles tendon injuries.

A literature search was performed using PubMed, EBSCO, and Scopus to identify all studies that were published from the inception of the database until April 2017. The search terminology that was used was “Astym”, which yielded 12 reports. The reference lists of these reports were also reviewed to find additional studies. Due to the limited literature on this treatment, all of the studies were included, regardless of their design. There were 6 studies that evaluated the use of Astym therapy on the knee, 3 studies that evaluated its use on upper extremity conditions surgery, 1 study evaluated Astym therapy’s use on the hamstring muscles, 3 studies evaluated use of Astym therapy for ankle or Achilles tendon injuries, and 1 study that evaluated its effect on for both hamstring and Achilles tendon pathology.

Of the 6 studies that evaluated Astym therapy on the knee, 4 reported on patients after undergoing total knee arthroplasty, one randomized clinical trial evaluated lower extremity musculoskeletal injuries, and one randomized clinical trial reported on patellar tendinitis (Table 1). Chughtai et al. (18) evaluated 21 patients (26 knees) who underwent TKA followed by a standard physical therapy protocol and had at least one failed manipulation under anesthesia (MUA), and continued to have persistent knee stiffness. After undergoing treatment with Astym therapy for a mean of 17 sessions, there were improvements in flexion deficit (70º to 105º, P≤0.001), flexion contracture (15º to 3º, P≤0.001), and the Knee Society objective (57 to 80 points, P<0.0001) and function scores (54 to 80 points, P=0.0003). In another study (24), they evaluated 57 patients (57 knees) who had a mean age of 59 years (range, 32 to 81 years) who underwent TKA followed by MUA either underwent standard of care physical therapy (n=35) or innovative multimodal physical therapy (IMMPT), which included Astym therapy (n=22). At the 6-month evaluation, the IMMPT group did not have any repeat MUAs, but the standard of care group had 7 repeat MUAs (P=0.025), and the IMMPT group had better knee flexion compared to the standard of care group (116º vs. 106º, P=0.005). Similarly, McGinn et al. (26) reported on 127 non-obese patients (127 knees) who had a mean age of 67 years (range, 42 to 88 years) and underwent TKA and underwent standard of care physical therapy (n=80) or IMMPT, which included Astym therapy (n=47), and found that the average flexion (115º vs. 115º, P=0.6) and extension (0.83º vs. 0.81º, P=0.9) were similar, but the rate of MUA was much higher in the standard physical therapy group compared to IMMPT (10 vs. 1, P=0.045). In a case report, Bhave et al. (27) reported on a 38-year-old male who underwent TKA and had persistent knee stiffness despite undergoing 2 MUAs. After 12 physical therapy visits where he received concomitant Astym therapy, the patient’s knee flexion increased from 110º to 115º, his global rating of change score was +7, pain improved from a 10/10 to a 2/10, and radiographs showed the patella had a 1 cm change in position, which demonstrated his patella baja had resolved. 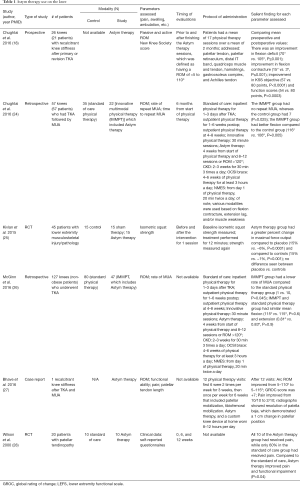 Table 1 Astym therapy use on the knee
Full table

In summary, of the four studies that reported on patients who had persistent knee stiffness after TKA, even after undergoing at least 1 MUA, who were treated with Astym therapy and/or IMMPT, which included Astym treatment, had significantly better knee range-of-motion and Knee Society scores, and pain relief. Astym therapy also was associated with superior results with improved function and pain relief in those with patellar tendinitis, and an increased lower extremity isometric muscle strength, especially with injuries to the hip, thigh, and knee region compared to the more distal aspect of the lower extremity.

There were two studies that evaluated Astym therapy on the shoulder and 1 study that evaluated the elbow (Table 2). Davies and Brockopp (29) performed a pilot study that evaluated patients who developed adhesions after undergoing mastectomy for breast cancer, and were treated with Astym therapy. They found that Astym treatment significantly improved the DASH score by 29 points (P<0.000), and shoulder abduction by 16º (P<0.000) and flexion by 13º (P<0.000). Additionally, the number of women who could tolerate wearing a bra after Astym therapy increased from 56% to 100%. In another study, Davies et al. (30) reported on 42 women who had a mean age of 52 years (range, 33 to 75 years) who had mastectomies performed for breast cancer. After undergoing 8 treatments, there were improvements in the DASH score (33 to 23 points, P<0.01), the Patient-Specific Functional Scale score (5 to 7 points; P<0.01), the clothing questionnaire score (19 to 15 points; P<0.01), shoulder flexion (135º to 154º, P<0.01), and shoulder abduction (135º to 154º, P<0.01). 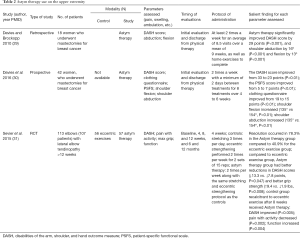 Table 2 Astym therapy use on the upper extremity
Full table

In summary, Astym therapy was beneficial to patients who developed soft tissue restrictions after undergoing mastectomies for breast cancer, by helping to decrease the disability related to the shoulder and also was associated with increased shoulder range-of-motion. Additionally, in patients with lateral elbow tendinopathy, Astym therapy was shown to be highly effective and safe not only as an initial treatment, but also as a treatment for recalcitrant cases. While this therapeutic intervention was successful in these musculoskeletal conditions, in order to determine the efficacy of Astym therapy on a wider range of upper extremity disorders, further study may be needed.

There were 2 case reports that reported on Astym therapy for the hamstring muscles (Table 3). McCormack et al. (5) reported on a 44-year-old female who had proximal hamstring tendinopathy characterized by pain with walking and sitting and was unable to run. She had physical therapy two times per week for 16 visits and received Astym therapy, and after 8 weeks, the patient was pain free with walking and sitting and was able to run pain free for more than 2 miles. Also, Scheer et al. (32) evaluated an 8-year-old female with a diagnosis of cerebral palsy who had bilateral hamstring stiffness, and after undergoing 11 physical therapy session with Astym therapy, the patients hamstring flexibility increased from 140º to 165º with the hips in the 90/90 position.

Table 3 Astym therapy use on the hamstrings
Full table

In summary, Astym therapy along with stretching and eccentric exercises led to marked improvements in hamstring tendinopathy and stiffness. Since the 2 studies reporting on these outcomes were both case reports, more studies are warranted in order to further confirm the benefits of Astym therapy for problems related to the hamstrings.

There were 4 studies that reported on Astym therapy for treating ankle and Achilles tendon pathologies (Table 4). McCormack et al. (19) reported on a 53-year-old female who was diagnosed with tendinopathy of the mid-portion of the Achilles who underwent Astym therapy twice per week for 5 weeks, and after the 10th treatment the patient was pain free and was able to participate in her normal activities. Similarly, in a randomized controlled trial, McCormack et al. (1) evaluated 15 patients with insertional Achilles tendinopathy, with 8 patients allocated to receive eccentric exercise and the other 7 received Astym therapy in addition to eccentric exercises. At 12 weeks, more successful outcomes occurred in the Astym group compared to the eccentric exercise only group (100% vs. 50%, P=0.03), and this continued at the 26- (P<0.01) and 52-week (P<0.01) follow-ups. Also, while pain level significantly improved within the groups, there was no significant difference when the groups were compared. 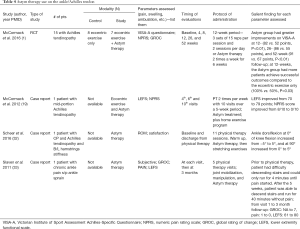 In another study, Slaven et al. (33) described the case of a 35-year-old female who had a severe ankle sprain that required her to wear a walking boot for 3 weeks, and had the complaint of chronic ankle pain that allowed her to only run pain free for 4 minutes, and made descending stairs difficult. After receiving physical therapy along with Astym treatment over 5 visits, she was able to run for 40 minutes without pain and was able to descend stairs. In a case already described, by Scheer et al. (32), an 8-year-old female with cerebral palsy suffered from Achilles tendinopathy, and received 11 physical therapy sessions with Astym treatment. At discharge from the therapy, the patient’s ankle dorsiflexion increased from −5º to 5º with the knee at 0º of flexion and increased from 0º to 5º with the knee at 90º of flexion.

The present analysis reviews the use of Astym therapy for soft tissue disorders of the knee, upper extremity, hamstring muscle, Achilles tendon, and ankle. Astym therapy was developed methodically from theory through basic science investigation to clinical study and practice. Evidenced in laboratory studies to engage the regenerative mechanisms of the body, it has been shown to be a consistently safe and effective treatment in the conditions studied. Based on the results of the present review, the incorporation of Astym therapy into rehabilitation protocols, can lead to significantly better outcomes in terms of range-of-motion and function in patients with postoperative pain and stiffness due to soft-tissue fibrosis, as well as patients who are suffering from other soft-tissue disorders such as tendinopathy. Due to the fact that some of these studies were case reports, larger studies will be needed in order to confirm the benefits of Astym therapy on a variety of musculoskeletal disorders.