A decline in glucose metabolism in the posterior cingulate cortex (PCC) is one of the earliest biomarkers for AD, which are present years before symptom onset (1). Furthermore, it actually predicts the conversion from healthy aging to mild cognitive impairment (MCI), and from MCI to AD (2,3), signifying its important role in AD progression. Evidences showed that glucose metabolic disorder occurs before the onset of AD and glucose metabolism is a sensitive indicator of cognitive and functional changes in AD and MCI, which may be valuable in predicting cognitive decline in future (4,5). A study demonstrated that enhancing glucose uptake in neurons has a strong neuroprotective effect which can improve proteostasis in the fly model of AD (6). AD patients typically show a very characteristic pattern of hypometabolism in the posterior cingulate, parietotemporal cortices and frontal lobes (the so-called AD metabolic pattern).

Fluorodeoxyglucose f18, also known as fluorodeoxyglucose and abbreviated as 18F-FDG or FDG, is a radioactive drug used in medical imaging of positron emission tomography (PET). The uptake of 18F-FDG by tissues is a marker of glucose uptake which is closely related to tissue metabolism. Currently, 18F-FDG PET is gaining increased acceptance as a valuable tool to investigate pre-symptomatic AD (7-10). 18F-FDG PET, which enables evaluation of cerebral glucose metabolism, is increasingly used to support clinical diagnosis of suspected dementia patients. According to the new recommendations by the Alzheimer’s Association, 18F-FDG PET is regarded as the only functional neuroimaging biomarker for degeneration which can be used to increase the certainty of AD pathophysiological process in research settings (clinical trials, investigational studies) or regarded as an optional clinical tool where available (11-13).

Although a decline in FDG metabolism was confirmed in some regions known to be associated with AD, there was little known about the genetic association of FDG metabolism in AD cohorts. We hypothesized that FDG may constitute a suitable endophenotype for a GWAS designed to identify genetic factors and highlight relevant physiological and pathophysiological processes. In this study, we present the first GWAS analysis of FDG metabolism in Alzheimer’s Disease Neuroimaging Initiative 1 (ADNI-1) database. Through the analysis of AD cases, we hope to identify novel variants specific to FDG metabolism by 18F-FDG PET.

Data used in this study were obtained from the ADNI database (www.loni.ucla.edu/ADNI). The ADNI was launched in 2003 as a public-private partnership, led by Principal Investigator Michael W. Weiner, MD, VA Medical Center and University of California-San Francisco. ADNI was established to test whether serial magnetic resonance imaging (MRI), PET, other biomarkers, and clinical and neuropsychological assessment can be combined to measure the progression of MCI and early AD.

In this study, a total of 222 individuals (AD =37, MCI =126, healthy controls, HC =59) were included from the ADNI-1 cohort. All subjects were restricted to non-Hispanic Caucasians and met all quality control (QC) criteria. The analysis was restricted to non-Hispanic Caucasians to reduce potential bias from population stratification which might confound GWAS results. The detailed demographic information has been shown in Table 1.

The data for FDG analysis were obtained from UC Berkeley and Lawrence Berkeley National Laboratory (http://adni.loni.usc.edu/data-samples/access-data/). In the analysis, five regions containing the left and right angular gyri, bilateral posterior cingulate, the left and right temporal gyri were analyzed as meta ROIs (regions of interest). The short procedures were as follows. Firstly, we downloaded the PET data from LONI (http://loni.usc.edu/). Then, these images were normalized to the MNI PET templates in SPM. The average numbers of FDG scans for each subject were calculated, and the intensity values were computed using SPM subroutines. Finally, the average value of the top 50% of voxels in a hand-drawn pons/cerebellar vermis region was extracted from the T1 template in the MNI space. The average of each meta ROI was standardized through the pons/vermis reference region average (Landau et al., 2011). 18F-FDG PET measurement 366–399 MBq of 18F-FDG was injected intravenously into all subjects and the follow-up time was 30 min. During this time, the subjects were undisturbed and resting quietly in a dark room with their eyes open. The subjects were then imaged with their eyes open for an 8-min image collection consisting of four 2-min dynamic frames.

The samples were genotyped with the Human 610-Quad BeadChip. Stringent QC assessment was performed using the PLINK software with the following criteria: minimum call rate for SNPs and individuals >98%, minimum minor allele frequencies (MAF) >0.04, and Hardy-Weinberg equilibrium test P>0.001. The restriction to SNPs with a MAF greater than 4% served to reduce the probability of false positive results and enhance statistical power. Rs7412 and rs429358 that define apolipoprotein E (APOE) alleles, were genotyped separately with an APOE genotyping kit.

Associations of 18F-FDG with the genetic variants were assessed using PLINK 1.07 under an additive genetic model. The thresholds of P<10–6 and P<10–7 were used for suggestive and genome-wide significant associations respectively. Our analysis included a total of 319,792 genotyped variants. Age, gender and diagnosis were included as covariates. Bonferroni correction of the P values by the total number of acceptable quality SNPs was used for multiple test correction. Genome-wide associations were visualized using a software program R 3.2.3. 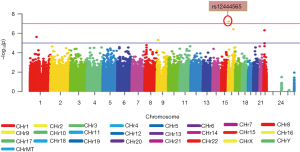 Figure 1 Genome-wide association results for 18F-FDG in ADNI-1. The y-axis shows the P values (on the –log10 scale) for each association test. The x-axis is the chromosomal position of each SNP. The gold horizontal line at 10−7 indicates genome-wide significance. A genome-wide significant association of rs12444565 with 18F-FDG was detected. Four additional SNPs with suggestive association (rs235141, rs79037, rs12526331 and rs12529764) were identified. 18F-FDG, fluorodeoxyglucose f18; ADNI-1, Alzheimer’s Disease Neuroimaging Initiative 1.

A GWAS was performed in ANDI-1 to study the effect of genetic variation on the cerebral glucose metabolism. The use of quantitative traits in GWAS has been shown to have an increased statistical power and a decreased requirement of sample size, so this study has more advantages than traditional case-control designs (14-16). We identified a genome-wide significant association of a SNP in the regions of RBFOX1 with glucose metabolism and four additional SNPs with suggestive association (rs235141, rs79037, rs12526331 and rs12529764) by using 18F-FDG as quantitative traits.

RBFOX1, a neuronal RNA binding protein, also known as Ataxin-2-binding protein 1 (A2BP1) or FOX1, was initially identified as an interacting partner of ATAXIN-2 (17) and was expressed in neuronal tissues, muscle and heart (18,19). The RBFOX1 gene locus is located on chromosome region 16p13.3 (20). Through the combination with (U) of GCAUG element in mRNA precursor, RBFOX1 has been reported to play a key role in alternative splicing in the key genes of neuronal development, such as calcitonin/calcitonin gene related peptide, CaV1.2 voltage-controlled calcium channel and N-methyl-D-aspartate (NMDA) receptor 1 (18,19,21-23). Defects in these key processes may lead to the structural and functional defects of cortical neurons, leading to the pathophysiology of neurodevelopmental disorders with RBFOX1 abnormalities (24). Genetic studies, including GWAS, have proven that RBFOX1 is associated with many neuropsychiatric disorders including autism spectrum disorder (ASD), epilepsy, attention deficit hyperactivity disorder (ADHD), generalised anxiety disorder (GAD), intellectual disabilities (IDs), and schizophrenia (25-30), which strongly suggest that partial RBFOX1 deficiency is a risk factor for the recurrence of human neurodevelopmental defects.

It has been reported that RBFOX1 plays a pivotal role in neuronal excitation regulation, which affects susceptibility to epilepsy (23,31). Many studies have suggested that a lot of RBFOX1 target transcripts play a role in epileptogenesis (32-34), while the rare external absence of RBFOX1 gene increases the risk of idiopathic generalized epilepsy (35). In mice, the brain’s specific homozygous and heterozygous RBFOX1 knockouts showed spontaneous epileptic seizures and dramatic epileptic responses without altering the morphology of the brain (23).

Human genetic studies have identified RBFOX1 as a candidate gene for ASD. Studies have shown RBFOX1 target transcripts are overlapping significantly in ASD (31). In addition, RBFOX1 was found to act as a “hub” in the gene transcription group network in the brain of ASD patients (31). Abnormal RBFOX1 gene encoding an mRNA-splicing factor, has been proved to cause ASD. In ASD patients, the expression of RBFOX1 was reduced in relation to the splicing of the target exon (36). A large number of splicing changes were detected in 48 genes in the brain of a group of ASD patients, whose RBFOX1 was estimated to be down-regulated (36).

The limitation of this study was the moderate sample size of GWAS. In addition, ADNI data was restricted to non-Hispanic Caucasians to avoid genetic stratification due to race. Therefore, our results can not represent other races.

To conclude, we detected a genome-wide significant SNP (rs12444565) in RBFOX1 and four suggestive loci (rs235141, rs79037, rs12526331 and rs12529764) associated with 18F-FDG. Accumulating evidence suggested that aberrations in RBFOX1-regulated circuitry were risk factors for multiple neuropsychiatric disorders, especially epilepsy and ASD. Therefore, 18F-FDG PET may be applied to some neuropsychiatric disorders especially epilepsy and ASD to predict the occurrence and development as well as therapy of the diseases through the genotyping in the future. Independent, larger datasets will be needed to replicate research to confirm this result.