Adult-onset Krabbe disease in two generations of a Chinese family

Krabbe disease (KD) (OMIM #245200), also known as globoid cell leukodystrophy (GLD), is a rare autosomal recessive lysosomal storage disorder that is caused by deficiency of the lysosomal enzyme galactocerebrosidase (GALC) (1). A lack of this key enzyme leads to the accumulation of galactosylsphingosine or psychosine, which is neurotoxic to both the central and peripheral nervous system, resulting in central white matter and peripheral nerve demyelination (2). The clinical forms of this disease vary based on the age of onset and clinical course. The classical early infantile type is the most common manifestation. Onset may also occur in later infancy, in childhood, or even in adulthood. Although the clinical manifestations of adult-onset KD are heterogeneous, its clinical hallmarks include slowly progressive spastic paraplegia with or without sensorimotor neuropathy. Acute onset and progression is very rare (3).

The GALC gene is mapped to chromosome 14q31 (4) and contains 17 exons spanning approximately 60 kb of genomic DNA (5). To date, more than 120 mutations in the GALC gene have been reported worldwide (6). Although GALC mutations have been extensively identified, extremely rare findings from the Chinese population have been reported, and a clear relationship between various genotypes and phenotypes has not been fully elucidated.

Herein, we report a case of adult-onset KD from a Chinese pedigree that initially presented with acute hemiplegia. Brain MRI showed selective pyramidal tract involvement with restricted water diffusion on DWI and low GALC activity in leukocytes. Compound heterozygous mutations of c.1901delT and c.1901T>C were identified in the GALC gene, and both variants have been previously reported as disease-causing mutations (7,8). In further family investigations, homozygous mutations for c.1901T>C were found in the patient’s father and two paternal uncles. Interestingly, these relatives were in their fourth or fifth decade of life, but they remained asymptomatic to date. However, selective pyramidal tract involvement on brain MRI and low GALC activity were also identified in the father. We reviewed all studies available on PubMed to understand the correlation between phenotype and genotype of the identified mutations in the GALC gene.

A 20-year-old Chinese boy experienced sudden onset weakness of the left limbs during sexual intercourse 1 month prior to admission, and the symptom progressed slowly over the following days. His parents were non-consanguineous. He was born after uncomplicated gestation and delivery. After birth, he was found to have an abdominal wall defect and had a neoplasty operation. One-and-a-half years later, he had a herniorrhaphy operation because of inguinal hernia. His developmental milestones were normal without toxic exposure. No drug or alcohol consumption was reported.

General physical examination showed no lymphadenopathy, normal chest and cardiovascular findings, no hepatomegaly or splenomegaly, and no skin lesions except for the scar beside his umbilicus because of the neoplasty operation.

On neurologic examination, he was alert, oriented and cooperative, and he had no difficulties with speech. He made full marks in the Mini-Mental State Examination (MMSE). Both visual acuity and fields were intact, and the funduscopic findings appeared normal. Motor examination showed mild left-sided brachiocrural hemiparesis with exaggerated deep tendon reflexes. Babinski signs and Hoffman reflexes were positive, and pes cavus was found on both sides. Sensation was normal to light touch and pin-prick as were the sense of joint position and vibration sense.

Brain MRI disclosed hyperintensity along the bilateral pyramidal tracts from the centrum semiovale to the cervical segment of the spinal cord on T2-weighted images (T2WI) and fluid-attenuated inversion recovery (FLAIR) images. No gadolinium enhancement was observed in the lesions. The pyramidal tract showed restricted water diffusion on diffusion-weighted imaging (DWI) (Figure 1). 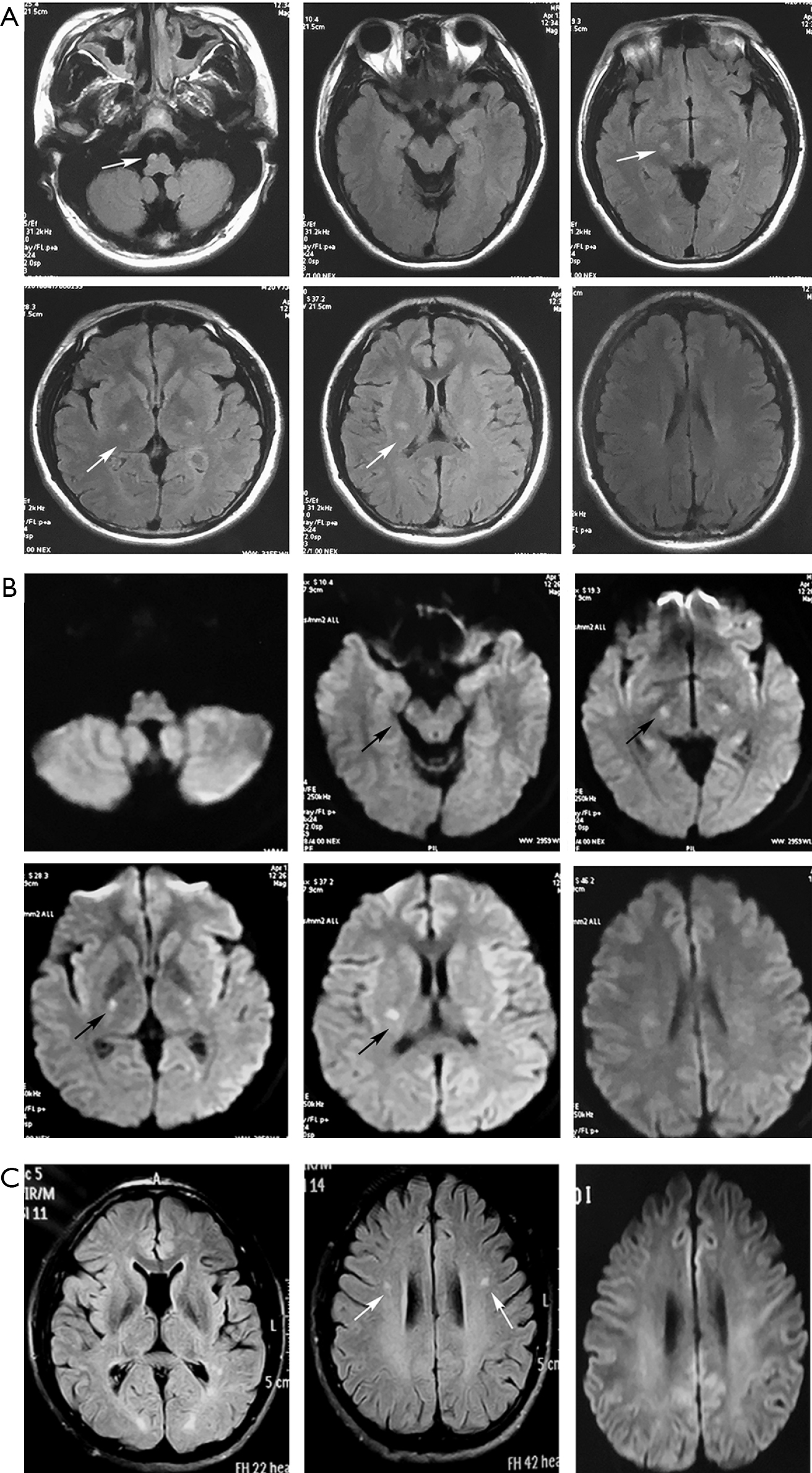 Figure 1 MRI studies of the proband (A,B) and his father (C). (A) Axial fluid-attenuated inversion recovery (FLAIR) images of the proband exhibit hyperintensity along the bilateral pyramidal tracts; (B) corresponding planes of diffusion-weighted imaging (DWI) showed diffusion restricted lesions; (C) hyperintensities of the bilateral pyramidal tracts and visual radiations were found on the FLAIR images of the father, but no restricted water diffusion was detected on DWI.

The parents, two paternal uncles, one aunt and grandparents of the proband were all in good health. None of the relatives had focal signs in neurological examination. The father’s GALC activity of leukocytes was 3.5 nmol/g/min (normal range >17.2 nmol/g/min), and brain MRI revealed hyperintensities of the bilateral pyramidal tracts at the centrum semiovale level. Visual radiations were also involved (Figure 1). Thus, the patient, despite having GALC deficiency and characteristic MRI lesions, was asymptomatic. The other family members refused to have further examinations except for genetic testing.

All subjects provided written informed consent for the genetic studies and their publication.

Genomic DNA-based PCR amplification and sequence analysis of the GALC gene was performed. Genomic DNA was extracted from peripheral blood leukocytes of the proband and his family members. Control DNA from unaffected Chinese individuals was also obtained from peripheral blood leukocytes (samples were provided by the Institute of Medical Genetics, Shandong University). PCR amplifications of all coding regions and intron-exon boundaries of the GALC gene were carried out under standard conditions, and PCR products were subjected to direct bidirectional sequencing. All references to nucleotides or amino acids were based on the cDNA reference sequence NM_000153 for the GALC gene.

Following the HGVS guidelines is recommended for mutation nomenclature; these guidelines suggest using the first ATG as a translation initiation codon at nucleotide +1 (http://www.HGVS.org/varnomen). However, GALC mutations have been previously reported with the second ATG as nucleotide +1 (9,10). Hence, throughout this article, we ascribe HGVS designations to specific amino acid residues with the traditional designations given in parentheses.

Molecular analysis showed compound heterozygous mutations of c.1901T>C (c.1853T>C) and c.1901delT (c.1853delT) in the proband, which would result in the p.L634S (p.L618S) amino acid transition and stop codon p.L634X (p.L618X), respectively. Familial segregation of the mutation of genomic DNA disclosed a paternal origin of c.1901T>C (c.1853T>C) and a maternal origin of c.1901delT (c.1853delT). To our surprise, the father was confirmed to be homozygous for c.1901T>C (c.1853T>C) mutation, as were the two paternal uncles. Then, the grandparents were confirmed to be carriers of this point mutation; they coincidently passed the mutation to their respective sons (Figure 2).

Figure 2 Genomic analysis (A,B,C) and pedigree chart (D) of the family. (A) GALC gene sequencing confirmed the compound c.1901delT and c.1901T>C mutations in the proband; (B) the heterozygous carrier state of c.1901delT in the mother; (C) the homozygous mutation of c.1901T>C in the father and two paternal uncles; (D) the pedigree chart of the family, where the proband is indicated by an arrow and the affected individuals are shown as closed symbols. The family members’ number are listed as 1-5.The two paternal uncles (II-1 and II-4) are shown as “?” because they were theoretically preclinical patients, but no additional clinical evidence was available.

Although the clinical manifestation of adult-onset KD is heterogeneous, involvement of the pyramidal tract is characteristic with an incidence as high as 82–94% (3,11,12). The MRI findings in the present case are consistent with previous reports. In addition, the clinical course of adult-onset KD is considered to be mostly chronic and slowly progressive. Acute progression is very rare. There have been only three reported cases of acute exacerbation similar to the present one (13-15). Meanwhile, only one report (15) mentioned a case of KD with restricted diffusion on DWI corresponding to exacerbation of the condition. In our case, restricted diffusion on DWI consistent with acute progression was also found in the proband but not in the asymptomatic father. Therefore, it seems that DWI is helpful in the follow-up of KD to assess disease progression.

In the present study, we identified compound heterozygous mutations in the GALC gene of the proband. The mutation c.1901delT (c.1853delT) had been found in a Mexican patient only (7). The other mutation, c.1901T>C (c.1853T>C), was first reported in a Japanese patient with late onset KD (8) and then described in many late-onset patients (16-18). We reviewed all studies related to c.1901T>C (c.1853T>C) or p.L634S (p.L618S) that were available on the PubMed and listed the clinical phenotypes in Table 1. This mutation has been reported in Japanese and Chinese populations and contributed to the late-onset form only. As we know, autosomal recessive diseases with the onset of two generations in one family are very rare, but if they are found, it is important to elucidate the genotype-phenotype correlation of the mutation. Therefore, we presented the phenotype of the c.1901T>C (c.1853T>C) mutation in one Chinese family in both heterozygous and homozygous states and confirmed the previous conclusion that all phenotypes of this mutation were the late-onset form. The phenotype of the proband with compound heterogeneous mutations is more serious than that of the homozygous father, which is attributed to the amino acid changes of these two mutations. The nonsense mutation c.1901delT (c.1853delT), which results in a stop codon, seems to be functionally important since polypeptide elongation was stopped at the 634th amino acid because of the premature stop codon; this mutation caused a larger structural change than the point mutation c.1901T>C (c.1853T>C). 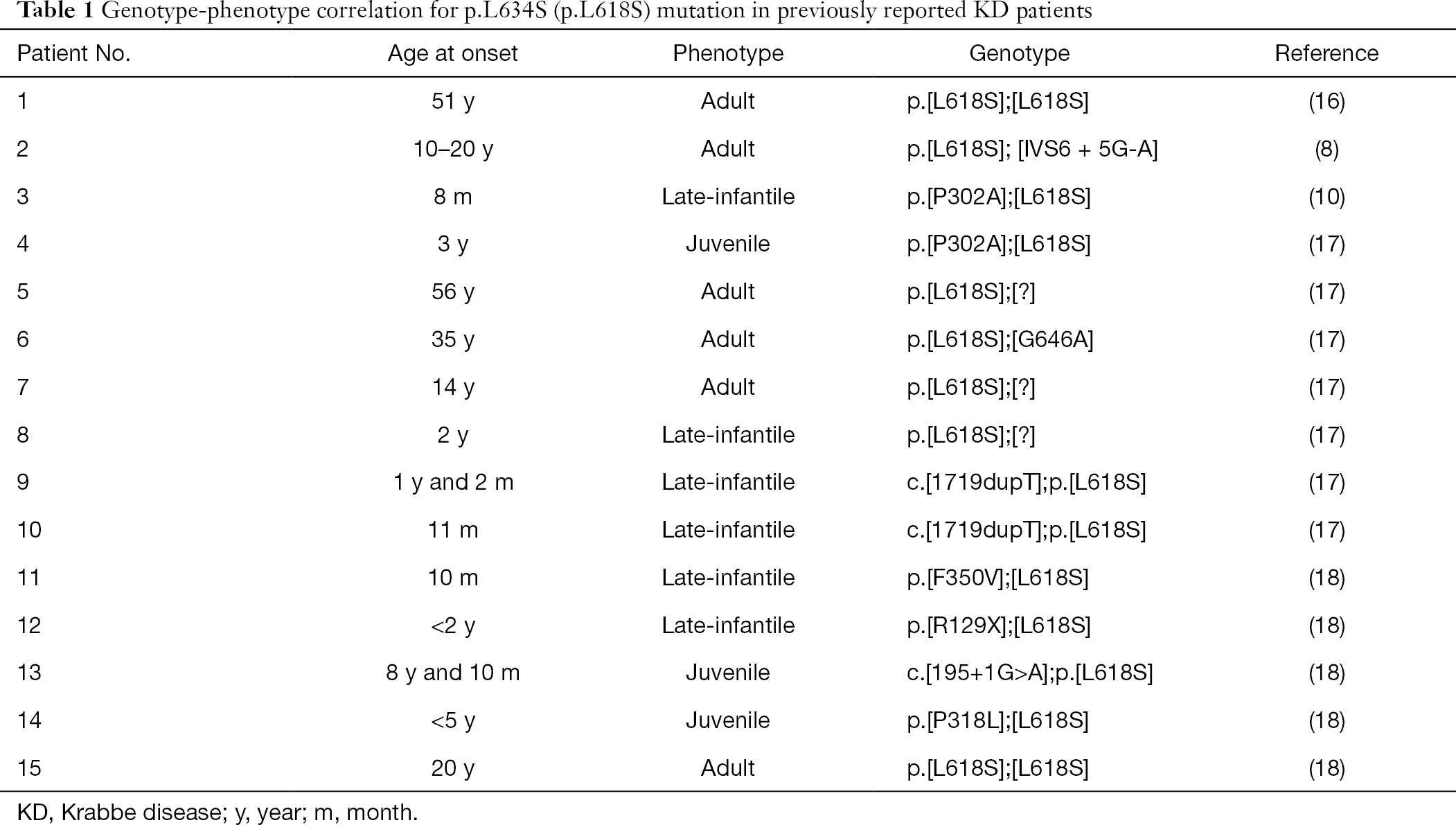 The presented pedigree in our study verified the genotype- phenotype relation of KD in two generations of a Chinese pedigree. We emphasize that KD should be included in differential diagnosis of selective pyramidal tract impairment in adults even if patients with an abrupt onset. If diffusion restriction is found on DWI, it may predict an acute exacerbation of KD. In addition, the c.1901T>C (c.1853T>C) mutation in the GALC gene will lead to a mild phenotype, and a patient harboring this mutation, especially the homozygous type, may have a better prognosis.

We thank the patient and his family for their participation.

Funding: The study was supported by grants from the Fundamental Research Fund of Shandong University (No. 2014QLKY27) and the Promotive Research Fund for Young and Middle-Aged Scientists of Shandong Province, China (No. BS10YY026).

Ethical Statement: The present study was approved by the Institute Ethical Committee of Qilu Hospital of Shandong University, Jinan, China.