Physical exercise and migraine: for or against?

Migraine can now be considered a major public healthcare issues, since it is one of the leading causes of disability worldwide, causing a considerable number of clinical, social and economic issues (1). Recent statistics attest that the prevalence of this condition may be as high as 25% in adults, with approximately 4% of the general population suffering from a chronic form of disease. Albeit the precise pathogenesis of migraine still remains substantially unknown (2), many effective therapeutic strategies have been proposed, mainly entailing the administration (alone or in combination) of triptans, ergots, acetaminophen and nonsteroidal anti-inflammatory drugs (NSAIDs). Besides, there is still uncertainty of the real effectiveness in many migraine patients of some possible prophylactic or preventive measures encompassing drugs, lifestyle changes and dietary habits (1).

The relationship between physical exercise and migraine remains rather controversial. On one hand, worsening of migraine pain has often been perceived by patients during or after regular physical exercise (3,4). However, in a critical review of scientific literature published nearly 10 years ago, Busch and Gaul concluded that although the data available at that time was mostly insufficient for establishing whether or not exercise may be an effective therapeutic or preventive measure for improving migraine symptoms and quality of life of affected patients, an active lifestyle is often recommended by many migraine experts (5). Ten years afterward, many and more recent epidemiologic and intervention studies were published, which should actually provide an updated and more straightforward contribution to dispel the doubts about the intriguing relationship between physical exercise and migraine. Therefore, the aim of this article is to provide a narrative review of recent scientific articles (i.e., published from the year 2008 to present time) which have explored the potential association between physical exercise and migraine.

Milde-Busch et al. administered a lifestyle questionnaire to 1,260 adolescents to identify potential correlates of migraine (7). These authors found that a low level of metabolic equivalent index of physical exercise was associated with a 4.2-fold higher risk of migraine compared with to a high level of metabolic equivalent index [odds ratio (OR), 4.2; 95% confidence interval (95% CI), 2.2–7.9].

Winter et al. reported the results of a large population study based on 7,417 individuals, in which the potential relationship between many lifestyle factors and migraine was investigated (8). No association was observed between the level of physical exercise and the risk of developing migraine attacks.

In a subsequent article, Winsvold et al. published the results of the Nord-Trøndelag Health Study in Norway 1995–1997 (HUNT 2) study, in which 48,713 subjects aged 20 years or older were administered with a questionnaire on potential lifestyle factors associated with development of migraine (9). Compared to patients without migraine (63.6%), those with (68.7%) or without (68.4%) aura reported a significantly higher burden of physical inactivity.

Koppen et al. interviewed 103 migraine patients first presenting at a headache clinic to identify potential correlates of migraine (10). Overall, 39/103 patients (38%) reported a risk of developing migraine attacks during exercise, most of which during endurance activities (i.e., running). All of these patients also reported that migraine attacks tended to worsen by practicing physical exercise. Interestingly, neck pain and headaches were both more frequent in patients with exercise-provoked migraine than in those without.

Hagen et al. carried out a population-based historical cohort study (Nord-Trøndelag Health Study) to investigate the impact of different lifestyle aspects on the risk of developing migraine (14). The study population consisted of 15,276 participants without migraine at baseline, who were then evaluated over a period of 11 years. Interestingly, 1 to 3 hours of low-intensity physical exercise per week and 1 to 2 hours of hard physical exercise per week were respectively associated with a 22% [relative risk (RR), 0.78; 95% CI, 0.62–0.99] and 29% (RR, 0.71; 95% CI, 0.54–0.94) lower risk of developing migraine compared to inactivity. A trend towards lower risk of developing migraine was also observed for ≥3 hours of high-intensity physical exercise per week, but the association did not reach statistical significance (RR, 0.92; 95% CI, 0.67–1.27).

In another study, Luedtke et al. explored surface electromyography responses of trapezius muscle in 28 healthy subjects as well as in 31 patients with chronic migraine and 43 with episodic migraine (15). Increased bilateral trapezius muscle activity was recorded in all groups during physical exercise, but no statistically significant difference could be observed (P<0.05). It could hence be concluded that trapezius muscle activity should not be considered an underlying trigger but rather should be interpreted as an accompanying symptom in migraineurs.

In a subsequent study, Dittrich et al. equally randomized 30 migraine women to an aerobic exercise group (1-hour of twice-weekly indoor aerobic exercise program for 6 weeks) and a control group (no change of previous physical exercise level) (17). After the intervention period a substantial reduction of intense migraine pain (−80% versus pre-exercise and −75% versus control group) and frequency of migraine attacks (≥1 per week; −50% versus pre-exercise and −67% versus control group) could be recorded. Interestingly, nearly 90% of patients in the exercise group perceived that physical exercise was helpful to ameliorate active behavior.

Varkey et al. carried out an intervention study based on 26 migraine patients and entailing 40 min indoor cycling 3 times weekly for 12 weeks (18). At the end of treatment, a substantial improvement could be observed, as attested by a reduction of pain intensity (−18%), migraine attacks per month (−23%), days with migraine (−28%) and use of anti-migraine drugs (−24%). Notably, the perceived quality of life was also significantly improved after treatment (+12%).

Pairo and collaborators preformed a random semi-experimental study including 20 migraine women (19). The women were randomized into an exercise group (i.e., 40 min of moderate intensity aerobic exercise 3 times weekly) and a control group (no exercise). One month after the intervention, frequency, intensity and duration of migraine attacks were found to be substantially reduced.

Varkey and coworkers carried out another study based on a specific subset of 14 migraine patients, reporting that physical exercise often led to pain worsening during a migraine attack (20). All patients underwent two exhaustion cycle ergometer tests. Overall, a migraine attack developed after both tests in 3/14 patients (21%), after one test in 5/14 patients (36%), whilst 6/14 patients (43%) did not develop a migraine attack after either trial. Notably, a modest but significant association (P=0.036) was found between test-provoked migraine and baseline frequency of migraine attacks.

Interesting findings emerged from a recent intervention study, in which 52 migraine patients were equally randomized into an exercise group (i.e., 45 min of aerobic exercise 3 times weekly for 3 months) and a control group (i.e., usual daily activities, no aerobic physical exercise) (22). After the end of the study and during 6 months of follow-up, the aerobic exercise group displayed a substantial improvement of all the main migraine features, i.e., reduction of days with migraine (−23% versus both pre-exercise and control group), pain intensity (−16% versus pre-exercise and −8% versus control group) and pain duration (−28% versus pre-exercise, no difference with control group). Even more importantly, the quality of life of the exercise group was substantially improved during follow-up, as shown by a remarkable increase in the time spent on household chores (+32%), paid work or study tasks (+46%), social activities (+31%), family life (+33%), and physical exercise (+17%).

The current available evidence garnered from the respectable number of recent epidemiologic investigations and intervention studies would lead us to formulate a number of evidence-based conclusions. Indeed, the results of most recent epidemiological studies are consistent to show an inverse association between physical exercise and migraine, but it is quite challenging to establish whether physical inactivity may be the cause or the consequence of migraine, since migraine is a well-establish disabling condition that may actually limit social and physical capabilities (23). The evidence that emerged from the noticeable number of recent intervention studies seems more solid and reliable. Overall, a general reduction of frequency, severity and duration of migraine attacks has been observed after the exercise intervention periods, and this has also been frequently associated with a considerable improvement of the quality of life of the affected subjects (Table 1). These findings may be of substantial value in a clinical perspective. Severe migraine has a strong and unfavorable impact on the quality of life of the affected patients, since it is a disabling condition which not only impairs social life, but also unfavorably impacts physical functioning (24), often leading to compromised postural control performance (25). This evidence would hence pave the way to hypothesizing the existence of a vicious cycle, in which migraine becomes a major impediment for regular exercise performance and, in turn, a lower level of physical exercise would then contribute to worsen severity, frequency and duration of migraine attacks, thus further limiting the willingness of migraineurs to exercise (Figure 1). Therefore, regular engagement in moderate-intensity aerobic exercise (i.e., ≥40 min, 3 times per week) may be regarded as a reasonable preventive measure in these subjects (Table 2). Many biological effects can be triggered by physical exercise, some of which may have a role in the pathogenesis of migraine. These will probably be mediated by chronic adaptation towards enhanced pain threshold and lower stress as commonly induced by regular physical exercise (26). This recommendation is indirectly supported by the evidence that even physiotherapy interventions (including manual therapy, soft-tissue technique and training) may be effective in reducing frequency and pain intensity of migraine (27). Whilst theoretically straightforward, this advice would not apply to patients with a personal history of exercise-provoked migraine (Table 2). This is due to the tangible risk that physical exercise may trigger or worsen a migraine attack in some patients, a process probably mediated by acute increase of the powerful vasodilation compound nitric oxide (NO) (16), which would then overcome the potential long-term benefits of physical exercise. 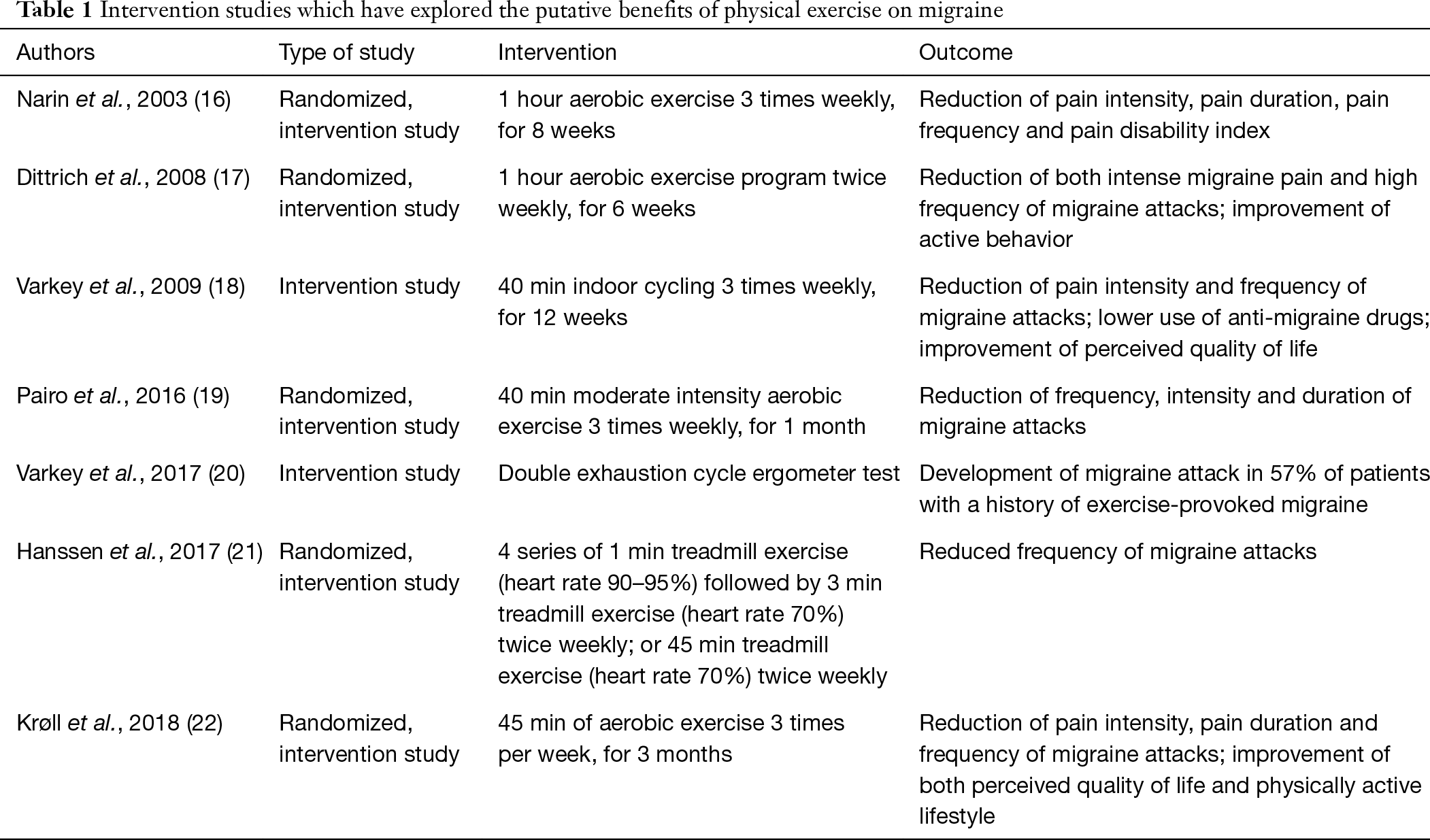 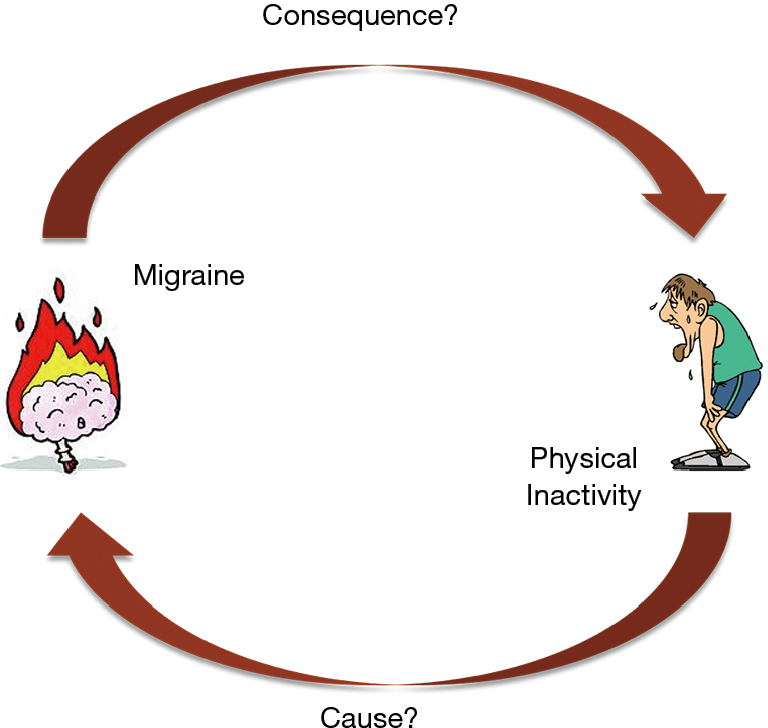 Figure 1 The “vicious cycle” between physical inactivity and migraine.