The inflammatory response is a critical component of innate immunity and required for controlling infection, clearing cellular damage, and initiating tissue repair. While this response is usually self-limiting and tightly controlled, inflammation can sometimes be aberrantly activated and prove injurious to host tissues, leading to acute or chronic disease pathologies. Perhaps the most dramatic of such pathologies is sepsis, a dysregulated inflammatory response to infection that can precipitate multiple organ system failure. Sepsis is a leading cause of mortality in hospital ICUs (1), and a recent global estimate attributed over 5 million deaths annually to this condition (2). Current treatment for sepsis remains mostly supportive, focusing on controlling infection and preventing organ failure. Thus, there remains a critical need for novel sepsis therapeutics. Multiple immune modulatory therapeutic strategies have been attempted, but the complexity of the disease, the diversity of underlying causes, and the heterogeneity of patient responses has yielded disappointing results in clinical trials (3). In a recent edition of Science Translational Medicine, Spence et al. (4) approached the treatment of sepsis-induced inflammation via a novel approach. Rather than attempting to neutralize a single molecular or cellular driver of inflammation, they stimulated a host Siglec receptor, a key anti-inflammatory regulator, using a nanoparticle decorated with the Siglec’s natural ligand, sialic acid, a sugar that exemplifies a “self-associated molecular pattern” (SAMP).

SAMPs, a term first coined by the physician-scientist and glycobiologist Ajit Varki (5), can be considered the functional counterpoint to the more commonly described pathogen-associated molecular patterns (PAMPs) and damage-associated molecular patterns (DAMPs), conserved molecules that the body recognizes as indicators of pathogen invasion and host cellular damage. Whereas PAMPs are produced by pathogens and include microbial components such as lipopolysaccharide (LPS), peptidoglycan and beta-glucan (6), DAMPS are endogenous molecules released from cells by tissue damage and cell lysis, such as heat-shock proteins and mammalian dsDNA (7). Both PAMPs and DAMPs are recognized by specific host pattern recognition receptors (PRRs), such as Toll-like receptors (TLRs), that trigger downstream signals to initiate and amplify inflammatory pathways. While the stimulation of PRRs by PAMPS and DAMPs is crucial in the detection and initiation of a protective immune response against invading pathogens, over-exuberant activation can lead to damaging inflammation and sepsis.

SAMPs, in contrast, help the host discriminate between self and non-self, and are recognized by inhibitory receptors on leukocytes to downregulated immune responsiveness under baseline homeostatic conditions (5). One common SAMP is sialic acid, a glycan moiety found on the terminal end of most mammalian sugar structures coating the cell surface. Sialic acid is recognized by a family of receptors termed sialic acid-binding immunoglobulin-like lectins (Siglecs) that contain an N-terminal lectin domain capable of binding different forms of sialic acid and a cytoplasmic immune-receptor tyrosine-based motifs that is most commonly inhibitory (ITIMs), but in a few circumstances, activating (ITAMs) (8). Siglecs are found predominantly on immune cells, but each Siglec has a distinct expression pattern. For example, human Siglec-9 (hSiglec-9) is expressed predominantly on neutrophils, hSiglec-8 on eosinophils and hSiglec-7 on NK cells. When engaged, inhibitory Siglecs dampen the inflammatory signaling initiated by PRRs, preventing or reducing the production of cytokines, antimicrobial responses, and immune cell activation. Inhibitory Siglecs are often upregulated after an initial inflammatory insult, such as exposure to LPS, and are poised to counterregulate and resolve the inflammatory response after the infection is controlled. Alterations in Siglec signaling have profound effects on immune homeostasis. In mice, for example, deficiency in inhibitory Siglec-E causes an exaggerated neutrophil response and increased resistance to bacterial infection (9), however these mice experience reduced lifespan as a result of increased oxidative damage (10). In humans, certain polymorphisms in inhibitory Siglec-3 have been correlated with increased risk of Alzheimer’s (11) and the loss of an activating Siglec-14 allele in some human populations has been shown to protect against COPD exacerbation (12). These lines of investigation indicate that Siglec signaling is a central regulator of inflammation in tissues and an attractive target for the development of drugs to counteract inflammatory pathology.

While just beginning to be explored pharmacologically, the targeting of Siglecs to dampen immune responses is not, evolutionarily speaking, a new idea. Cancer cells widely upregulate sialic acid ligands that are recognized by inhibitory Siglec-7 and Siglec-9 on NK cells in order to protect from NK cell-mediated lysis (13). In addition, multiple microbial pathogens have evolved to manipulate Siglec signaling through molecular mimicry of their innate ligand. For example, group B Streptococcus and Neisseria meningitidis both coat their cell walls with sialic acid, allowing them to engage Siglec-9 on neutrophils, dampen the neutrophil antimicrobial response, and evade killing by the immune system (14). In turn, preventing these subversive interactions can hinder both cancer cell and bacteria survival. For example, recent research demonstrates that a mouse strain expressing a soluble Siglec-9, which acts as competitive inhibitor to block the engagement of Siglec-9 on immune cells, is better able to control tumor growth and is less susceptible to infection by GBS (15).

Since Siglecs are expressed on specific cell populations, including cancer cells, targeting Siglecs for cell-specific depletion has become a popular treatment strategy. Indeed, there are several compounds currently in clinical trials that target Siglec-expressing cancer cells via antibody-based strategies. Although the ultimate goal of these treatments is cell depletion, research suggests that the success of these treatments may partly be due to the potential of Siglec-targeting compounds to engage Siglec signaling to modulate anti-tumor immune responses (16). Therapeutics specifically designed to target the immune modulatory properties of Siglecs have also begun to be explored. For example, anti-Siglec-8 antibodies have been generated that reduce eosinophil populations and subsequent inflammation in multiple mouse models of inflammation, including eosinophil-driven lung and gastric inflammation. Currently, such anti-Siglec-8 antibodies are in phase II clinical trials for the treatment of nasal polyps, a disease largely driven by aberrant eosinophil activation (17).

While antibody-based therapies represent a successful approach to target specific Siglec molecules, new advances in the development of sialic acid mimetics to specifically engage Siglecs and downstream signaling is also yielding promising results. In the study of Spence et al. (4), the authors investigated the therapeutic effects of sialic acid-coated nanoparticles in the treatment of sepsis and related inflammatory conditions (Figure 1). The coated nanoparticles target Siglec-E, a murine homolog of human Siglec-9 expressed abundantly on neutrophils and macrophages. In vitro, the engineered nanoparticles bound specifically to Siglec-E on murine macrophages and induced Siglec-E-dependent signaling, leading to a reduction in the production of LPS-induced cytokines and an increase in the production of the anti-inflammatory cytokine IL-10. Importantly, the authors further demonstrated the potential therapeutic benefit of nanoparticle treatment in vivo, employing several different models of acute inflammation and sepsis. For example, they found that treatment of mice with sialic acid-coated nanoparticles markedly prolonged survival during systemic LPS-induced inflammation, reducing disease symptoms and decreasing inflammatory cytokines while increasing levels of anti-inflammatory cytokines. These effects could be attributed specifically to Siglec-E signaling in macrophages, as macrophage depletion abrogated the effect of nanoparticle treatment. Remarkably, nanoparticle treatment also rescued mortality even when the administration of the particles was delayed until the height of the inflammatory response. 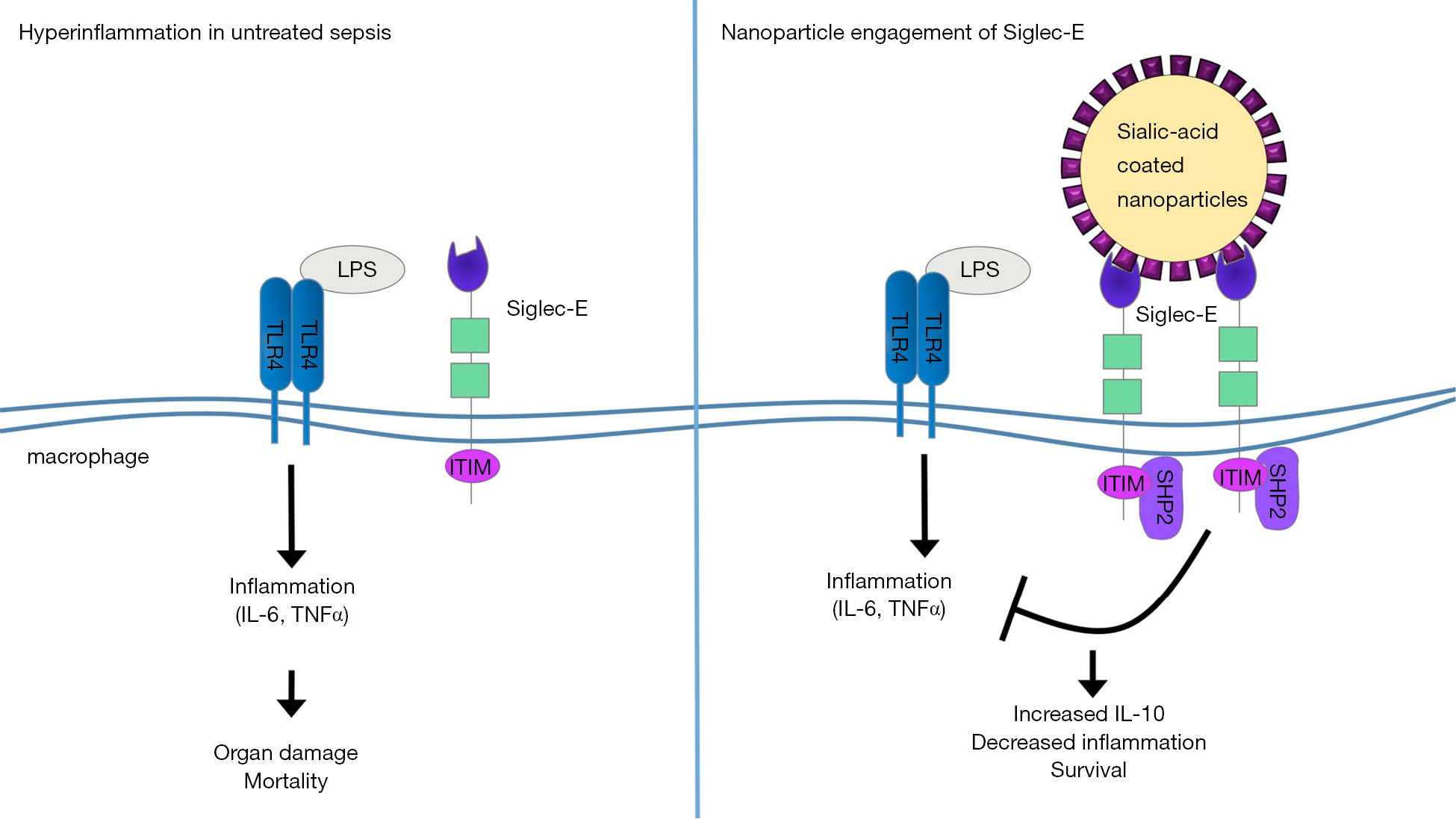 In addition to systemic LPS-induced inflammation, the Spence et al.’s study (4) showed that sialic acid-coated nanoparticle treatment can reduce mortality and symptoms in the mouse cecal ligation and puncture (CLP) model of polymicrobial sepsis, and in a murine model of acute respiratory distress syndrome (ARDS), a prominent complication of sepsis that leads to high mortality. Finally, to translate potential therapeutic effects to humans, where hSiglec-9 functions as an ortholog to murine Siglec-E, the authors investigated the effect of nanoparticle treatment during a human ex vivo lung perfusion model. In line with the results observed in mice, nanoparticle treatment significantly reduced pulmonary edema and increased IL-10 production, suggesting this strategy may in fact provide a viable new approach for the treatment of sepsis.

While use of sialic acid mimetics to directly engage Siglecs and modulate sepsis-driven inflammation is highly promising, certain factors still need to be addressed to move this approach forward toward the clinics. Importantly, the spectrum of biological functions of Siglecs is still being elucidated, and potential cross-ligand effects of nanoparticle treatment on other Siglecs must be clearly identified (e.g., the phagocytic receptor Siglec-1, also known as sialoadhesin). In addition, since inflammation is a protective response against pathogen invasion, dampening it may diminish the robustness by which leukocytes express molecular and cellular effectors of pathogen clearance, such as oxidative burst, phagocytosis, degranulation and extracellular trap formation. Thus, a beneficial outcome of targeted engagement of Siglecs may require careful monitoring of patient symptoms and responses to find the right balance of pro- and anti-inflammatory responses. Nevertheless, the central role of Siglecs in mediating inflammation suggests that the possibility of fine-tuning inflammatory responses via administration of glyco-coated particles that target these receptors could represent a powerful tool to better address a perpetually unmet clinical need.

Funding: Authors were supported by NIH/NHLBI Program of Excellence in Glycosciences (P01 HL107150). A Coady was also supported through a postdoctoral fellowship from the A. P. Giannini Foundation.