Early detection of myocardial infarction—microRNAs right at the time?

Acute myocardial infarction (AMI) is the major cause of death and disability worldwide and the risk of death is highest within the first hours from chest pain onset (1). Hence, an early and accurate diagnosis of AMI in patients presenting with chest pain is of paramount importance for effective treatment and improvement of outcome prognosis (2). In addition to the clinical symptomatic, electrocardiographic and imaging findings, the rise or fall of cardiac troponins, released from the damaged cardiomyocytes, are important biomarkers for the diagnosis of AMI (2). However, troponins can also be released in other cardiac pathologies, such as myocarditis, and chest pain is often misunderstood or difficult to allocate by the patient. Therefore, novel biomarkers are needed to fine-tune AMI diagnosis and potentially enable personalized treatment in the future.

Implementation of novel biomarkers into clinical practice is an important area of biomedical research. A biomarker is a characteristic that is objectively measured and evaluated as an indicator of normal biological processes, pathogenic processes, or pharmacological responses to a therapeutic intervention, and the overall expectation of a biomarker is to enhance the ability of the clinician to optimally manage the patient (3). To evaluate a biomarker, important measures are its sensitivity (the ability to detect the disease, i.e., identification of true-positives) and specificity (the ability to the detect absence of disease, i.e., identification of true-negatives), as well as its positive and negative predictive values (3).

Recently, new technologies have been applied for screening potential novel biomarkers, taking into account not only proteins but also additional promising molecules such as nucleic acids (4). From these analyses, non-coding RNA species have been characterized including microRNAs (miRNAs).

miRNAs are small sequences of endogenous RNA molecules regulating gene expression at a post-transcriptional level (5). miRNAs are involved in a broad range of biological processes and their dysregulation impacts disease development (5). Because of their remarkable stability in biological fluids such as serum/plasma and urine (5) and their tissue-specificity, there is a great interest in miRNAs as novel circulating biomarkers.

Several lines of evidence support this role of miRNAs: studies—using human blood samples as well as animal models, and focusing on the diagnostic potential, compared miRNAs in AMI patients to controls as well as to established biomarkers e.g. troponin (6-9). The most-reported miRNAs were the cardiac-specific miRNAs miR-1, miR-133a, miR-208b and miR-499 (10) that showed high sensitivity and specificity as biomarkers for AMI (10). Similar, miRNAs were identified that facilitate differentiation of unstable angina pectoris (UAP) from stable AP (SAP) or non-coronary chest pain (NCCP). These include the non-cardiac specific miRs 134, 198, 370 (UAP/SAP) and miRs 132, 150, 186 (UAP/NCCP) (11), indicating that also non-cardiac specific miRNAs—in combination - can be of diagnostic value.

In this issue of Cellular Physiology and Biochemistry Wang et al. (12) investigated a signature consisting of three (non-cardiac) circulating miRNAs, namely miR-19b-3p, miR-134-5p and miR-186-5p, for its potential use as a biomarker for (fine tuning) AMI diagnosis. The authors present results of a longitudinal assessment of these three miRNAs over different time points after chest pain onset and explored the diagnostic potential of the single miRNAs and in combination. All three miRNAs were upregulated after the onset of chest pain within a range of four to 72 hours, and showed a positive correlation with cardiac troponin I (cTnI). Not surprisingly, levels of cTnI were also increased already at the time of admission. Calculation of the area under the ROC curve (AUC)—as an indicator for the discriminatory performance of the miRNAs, showed good AUC values indicating a discriminatory ability of the three miRNAs—singly and as a combined miRNA score. Interestingly, Wang et al. also investigated the influence of heparin and medication on the circulating levels of the three miRNAs and concluded that neither administration of heparin nor the administration of ACE inhibitors, beta-blockers, mitrates, statins, aspirin and clopidogrel) had an influence on the miRNA levels.

Although the concept to explore miRNAs for diagnosis of AMI is very attractive, there are still various challenges to face due to preanalytical and analytical factors influencing data quality. These factors include the study design, the choice of material, isolation, detection and processing techniques as well as normalization strategies, and the influence of drugs and other, non-cardiac disease and phenotypes (Figure 1). 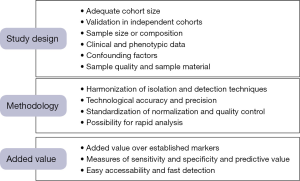 An appropriate study design is a foremost requirement for reliable biomarker identification, ensuring adequate sample size for analysis and accounting for possible confounders (5). Wang et al. (12) used a comparatively small group of AMI patients and controls. Aside from the small study cohort, other studies of that purpose usually match one or even two control subjects to one “case” according to a panel of pre-defined factors, rather than merely excluding differences of the overall groups or validate their initial findings in much larger independent study cohorts. The three miRNAs investigated in the study of Wang et al. (12) have all been described already to be involved in development as well as pathologies of the heart (13), such as heart failure, but also in other context, such as gastric cancer (14). Therefore, great attention needs to be paid to the selection of case as well as control groups and potential confounding factors influencing miRNA levels. Furthermore, only a small number of non-cardiac miRNAs have been selected by the authors, apparently based on the current literature. Thus, other miRNA with potentially better performance might have been missed.

The detection of miRNAs currently relies on real-time PCR techniques, and thus depends on the limitations raised by the current lack of standardized isolation, detection and normalization strategies. To date, several approaches are used including manual or commercial isolation techniques, different reverse transcription and PCR approaches as well as different normalization methods such as the use of synthetic spike-in material (as in the current study) or the use of an average of the Ct values of all tested miRs (4,5). To eliminate this technical and analytical variability and thereby avoiding artifactual data generation, consensus on standard methods for all steps is imperative.

Of great interested is that Wang et al. (12) directly investigated the effect of heparin and medication on the miRNA levels of interest. However—surprisingly—no significant influence on miRNA levels were found, although at least for miR-19b-3p and miR-186-5p a trend was observed which might reach statistical significance with a higher number of patients tested. Indeed, several other studies have demonstrated effects of statins and anti-platelet drugs on the levels of various circulating miRNAs (15). And heparin is known to interfere with a number of diagnostic markers and had previously been described to alter circulating miRNA levels (16,17).

For the translation of a potential biomarker candidate into clinical application it is of importance to investigate whether the novel marker shows an added value to established markers. For this, potential novel biomarkers for the diagnosis of AMI, i.e., circulating miRNAs, need to be compared directly to cardiac troponins—the gold-standard biomarker currently used for diagnosis of AMI. Since the introduction of highly sensitive troponin assays into clinical practice already substantially improved the early diagnosis of AMI, a direct comparison of the circulating miRNAs to high sensitivity assayed troponins is mandatory. Also, to accurately judge the diagnostic performance of circulating miRNAs, measures such as sensitivity, specificity as well as negative and positive predictive values are needed.

Lastly, independent of the purely methodological aspects, research is also required to address other relevant questions concerning the translation of miRNAs into clinical practice, such as a feasible time frame for qPCR analysis before patient treatment, ethical issues as well as optimal cost-benefit analysis.