Acquisition of carbapenem-resistant in the intensive care unit: just a question of time?

Acinetobacter baumannii (AB) is a Gram-negative, glucose non-fermenting, oxidase-negative coccobacillus, most commonly associated with a hospital setting (1). Regarding its clinical relevance, its importance since the 1980s has radically emerged. Currently, the Infectious Diseases Society of America describes it as one of the most significant hospital pathogens. It has previously been considered as a pathogen with limited virulence and ignored whenever isolated from clinical specimen, reflecting colonization more than infection. AB is now associated with invasive infection and the National Nosocomial Infection Study reports AB as being responsible for 6.9%, 2.4%, 2.1%, and 1.6% of health care-associated pneumonia, bloodstream infections, surgical-site infections, and urinary tract infections, respectively. The intensive care unit (ICU) is a recognized epicenter of AB epidemiology. Outbreaks may be due to sporadic and epidemic clones, with different reservoirs, such as environment and colonized patients. Affected patients have several comorbidities and have been exposed to invasive procedure, oxygen therapy; suffer from malnutrition, obesity or cirrhosis. Indeed, some clinicians believe that the recovery of AB in such hospitalized patients is an indicator of the severity of the underlying illness. Ultimately, AB-related health-care-associated infections may increase the risk of mortality from 8% to 40% (2-4).

From an epidemiologic point of view, AB can remarkably survive in the hospital environment, and its virulence factors include mainly capsular polysaccharides, outer membrane protein A and vesicles, phospholipase D and biofilm (5). In addition to its survival, AB has outstanding resistance aptitude such as: resistance mechanisms by acquisition of plasmids, transposons and integrons harbouring different antibiotic resistance genes; intrinsic resistance to many anti-microbials; intrinsic production of beta-lactamases with carbapenemase properties and evidence of “genetic plasticity” (6,7). There is not only a rise in the proportion of carbapenem-resistant AB isolates in the ICU (from 0% to 85.1% between late nineties and 2007), but also a concomitant decrease in antibiotic susceptibility of these isolates (26.3% of AB strains resistant to imipenem and 29.6% resistant to meropenem in the SENTRY study between 2001 and 2004, compared to a resistance of 43.4% and 42.5%, respectively, in the MYSTIC program in 2006) (8-10). A more recent study from Saudi Arabia reported susceptibility values of AB isolates for meropenem and imipenem to be 81% and 64% in 2006 and 11% and 8.3% in 2012, respectively (11).

Several studies (case-control, prospective cohort and retrospective) aimed at assessing the risk factors associated with the acquisition of carbapenem-resistant AB strains, whether colonization or health care-associated infection. Colonization pressure is an important risk factor, associated with prior antibiotic exposure. The role of broad-spectrum antibiotics may appear to be more important in case of low colonization pressure. Several studies agree on the fact that, in particular, whatever use of carbapenem, even a single dose, increases the incidence rate of resistant AB strains isolates and related infection (12,13). This can be explained by antimicrobial selective pressure, as time-kill studies show a rapid killing by carbapenem of sensitive AB, with the subsequent rise of resistant AB strains. However, data are lacking on previous colonization status or are not reporting systematic weekly colonization data, previous antibiotics use before ICU admission (14). Furthermore, antibiotics during ICU stay are mostly reported as binary variable (yes or no) or total duration of antibiotic treatment (15).

Only one study has previously examined the effect of duration of exposure to carbapenem on the occurrence of carbapenem-resistant AB among critically ill patients (16). This study reported average treatment potency (total dosage divided by total treatment duration) as the most consistent and reasonable marker of the dose-response effect of carbapenem exposure, using logistic regression analysis.

In a recent issue of Critical Care Medicine, Munoz-Price et al. (17) studied the impact of time-dependent antibiotic exposures on the acquisition of carbapenem-resistant AB (as per results of surveillance cultures) among 360 patients initially found to be non-colonized. Indeed, time-fixed variables (such as diabetes) do not change their status over the observation time. However, antibiotic exposures are far from being constant and their analyses should be performed according to their time-dependant behaviours. In this study, the authors defined, starting from the first day of antibiotic administration, a daily and a cumulative antibiotic dosage (in grams) and they also constructed a cumulative defined daily dose (DDD) for each antibiotic (18). Forty-five patients (12.5%) acquired carbapenem-resistant AB. Hazard ratios (HRs) for the acquisition of AB on surveillance cultures were assessed using Cox hazard models. They showed that once carbapenems were given, the hazard of acquiring AB quadrupled (HR, 4.45; 95% CI, 2.05–9.68; P=0.0002); this effect remained significant after adjusting for APACHE score (HR, 4.08; 95% CI, 1.87–8.92; P=0.0004). Furthermore, only cumulative carbapenem exposure (DDD) showed association with resistant AB (HR, 1.051; 95% CI, 1.01–1.09; P=0.0243).

These results are interesting and the authors should be congratulated for the quality of their study. However, as acknowledged by the authors, some limitations should be taken into account, such as the single center design, the fact that not all patients admitted to the ICU underwent surveillance cultures, and the performance surveillance cultures only once per week. In addition, no data are presented on the role of cross-transmission in the acquisition of carbapenem-resistant AB, since molecular typing of AB isolates was not performed. Further, the role of the environment was not evaluated. Previous studies clearly showed that the environment played an important role in the acquisition of multidrug resistant (MDR) bacteria in the ICU (19). Observational studies also showed that when prior room occupant was colonized with MDR bacteria, including AB, the risk for acquiring these bacteria by next patient was significantly higher (15,20). In addition, the authors provide no information on colonization pressure. Previous studies have found that the number of patients infected or colonized with MDR bacteria at the same time in the ICU was a major risk factor for acquiring these bacteria (21). The different mechanisms for acquiring carbapenem-resistant AB are presented in Figure 1. Finally, no data is provided on the impact of acquisition of carbapenem-resistant AB on patient outcome. 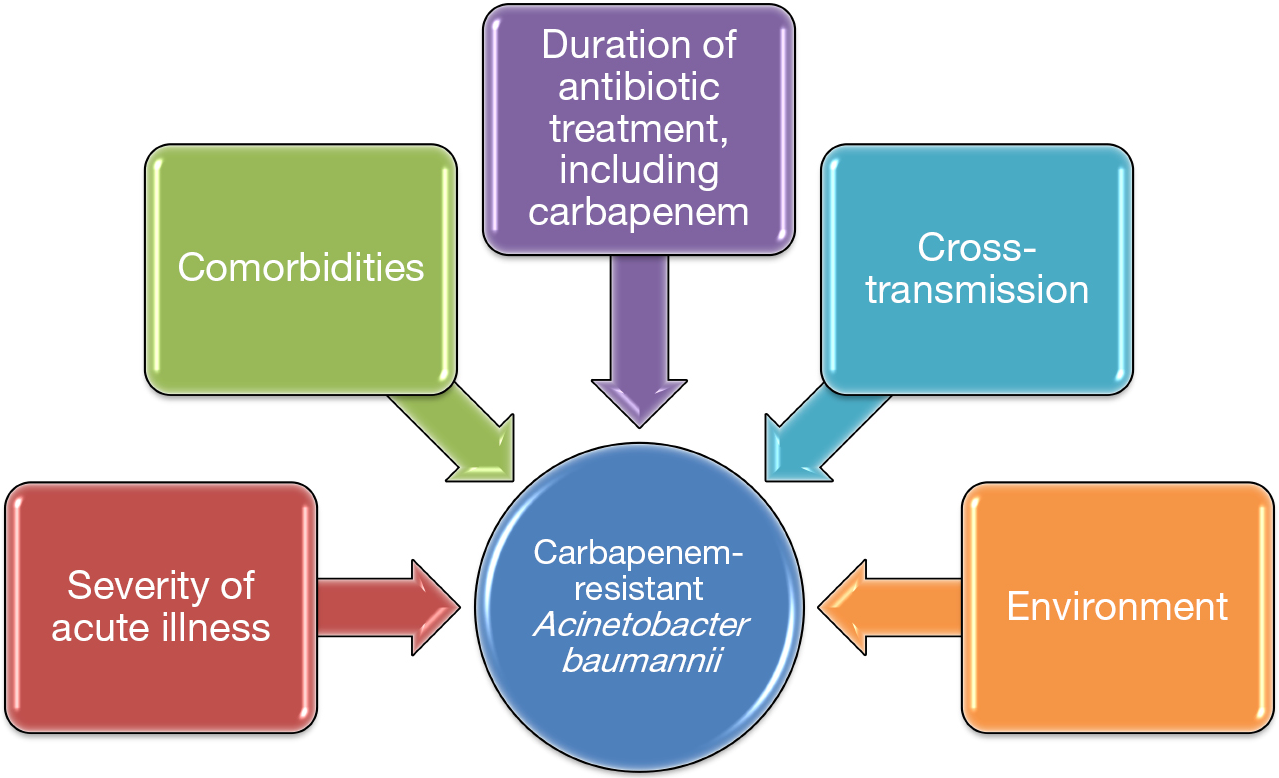 The two above-described studies (16,17) confirm the importance of the concept of antibiotics as time-dependant variables. Further observational research should better consider colonization rather than infection. Of importance, Cox analysis does not account for delayed effects of antibiotic exposures, as exposure of the day affects hazards of subsequent days. One should also integrate the potential effects of antibiotics before ICU admission, although most probably these antibiotics will not be broad-spectrum. Finally, information about compliance with infection control measures during the study period and surveillance cultures from the environment should be included in future studies. These data would be helpful to construct strategies for more judicious antibiotic stewardship, and better preventive strategies against MDR bacteria. Thus, the acquisition of carbapenem-resistant AB is probably not only a question of time (dependent variables).