Variation of the ileocolic artery and superior mesenteric artery in a patient with right-sided colon cancer with Lynch syndrome: a case report

Colon cancer is one of the most frequently occurring malignancies and has high morbidity. In 2020, there were approximately 1.1 million new diagnoses of colon cancer and 576,858 deaths due to the disease in the world (1). The promotion and application of total mesorectal excision (TME) has enormous benefit for patients with rectal cancer. In 2009, Hohenberger proposed the concept of complete mesorectal excision (CME) and central vessel ligation, which emphasizes the importance of vascular root ligation and complete lymph node dissection (2). For patients undergoing right-sided laparoscopic hemicolectomy, there is no standard operation and variation of superior mesenteric vessel branches can bring many difficulties for the surgeon. Variation of the primary superior mesenteric artery (SMA) is extremely rare, and simultaneous variation of the SMA and the ileocolic artery (ICA) has never been reported in the literature. Surgeons should correctly identify this vascular variation during operation to prevent unwilling bleeding and other complications caused by lacking of understanding of this variation. Herein, we report a case of simultaneous variation of the ICA and SMA in a patient who underwent laparoscopic radical right hemicolectomy for ascending colon cancer. We present the following case in accordance with the CARE reporting checklist (3) (available at https://atm.amegroups.com/article/view/10.21037/atm-22-3012/rc).

A 32-year-old female patient was admitted to The First Affiliated Hospital of Air Force Medical University on August 27, 2021, after experiencing intermittent abdominal pain accompanied by changes in stool habits for 3 months. The patient reported no abdominal distention, nausea, vomiting, constipation, or diarrhea. In terms of family medical history, the patient’s mother had undergone surgery for colon cancer in July 2015 and May 2021, and for cervical cancer in December 2020, and was living without disease recurrence at the time of the patient’s visit to our hospital. All procedures performed in this study were in accordance with the ethical standards of the institutional and/or national research committee(s) and with the Declaration of Helsinki (as revised in 2013). Oral informed consent was obtained from the patient. On the patient’s maternal side, there was a history of rectal cancer (the patient’s grandmother, an uncle, and an aunt), uterine cancer (a 29-year-old female cousin), rectal cancer with uterine cancer (two aunts), and colon polyposis (a 29-year-old male cousin) (Figure 1A). A physical examination showed mild tenderness only in the right lower abdomen. No significant abnormalities were found in serum tumor markers. A colonoscopy revealed a cauliflower-like mass at the beginning of the ascending colon (Figure 1B). Biopsy suggested moderately differentiated adenocarcinoma (Figure 1C). Abdominal contrast-enhanced computed tomography (CT) showed ascending colon cancer with intussusception (Figure 1D). The preoperative diagnosis was cT3N0M0 colon cancer, according to the TNM classification. 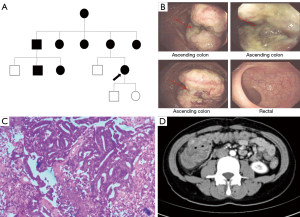 Figure 1 The pedigree diagram and ascending colon cancer of the patient (marked with a black arrow). (A) The pedigree chart shows how multiple members of the patient’s family across multiple generations have been affected by cancer. (B) The cauliflower-like mass (marked with red arrows) at the beginning of ascending colon. (C) A microscopic picture showing the haphazard arrangement of the tumor cells and the glandular cells (H&E staining, ×100). (D) An abdominal CT scan showing the ascending colon cancer with intussusception. H&E, hematoxylin and eosin; CT, computed tomography.

On August 27, 2021, the patient underwent laparoscopic radical right hemicolectomy under general anesthesia. During the operation, we found that there were two ICAs derived from the SMA, with the ileocolic vein (ICV) crossing anterior to the SMA (Figure 2A). The right colic vein was also absent (Figure 2B). The gastrocolic trunk of Henle was draining into the superior mesenteric vein (SMV), which was joined by the right gastroepiploic and colic veins, the anterior superior pancreaticoduodenal vein, and the superior right colic vein (Figure 2C). Furthermore, the SMA and SMV were found to be accompanied like “X”-shaped variant (Figure 2D). As we saw in the surgery，abdominal contrast-enhanced CT revealed two ICAs deriving from the SMA (Figure 3A). The right colic artery (RCA) originated from the front of the SMA (Figure 3B). The proximal end of the SMA was located on the left side of the SMV, but the distal end of the SMA was always located on the right side of the SMV (Figure 3A,3C). We summarized the schematic diagram of vascular variation of this patient (Figure 3D). The patient was discharged on the fourth day after surgery. Surgical pathology results suggested that the ascending colon mass was a moderately differentiated adenocarcinoma with locally advanced mucinous adenocarcinoma. The pathological staging was pT3N1aM0 according to the American Joint Committee on Cancer (AJCC) Cancer Staging Manual, Eighth Edition [2017] (Figure 4). Immunohistochemical results showed positive expression of MSH2 and MSH6 (Figure 5A,5B), but negative expression of MLH1 and PMS2 in the patient’s tumor sample (Figure 5C,5D). Given the patient’s family history of cancer, we highly suspected Lynch syndrome (LS). Next-generation sequencing (NGS), performed by 3D Medicines Inc. (Shanghai, China), was used to analyze tumor and blood samples from the patient. As shown in Figure 6, the results revealed MLH1 c.885-1_893del, which may represent a change in the conformation of the acceptor splicing site, which may have impeded mRNA formation, eventually leading to deficient mismatch repair. Seven weeks after surgery, the patient was administered a regimen of adjuvant chemotherapy with CapeOX (day 1, oxaliplatin 130 mg/m2, day 1 to 14 capecitabine 1,000 mg/m2, po, twice a day, every 3 weeks) for four cycles. Four months after the end of chemotherapy, CT reexamination showed no tumor recurrence (Figure 7). 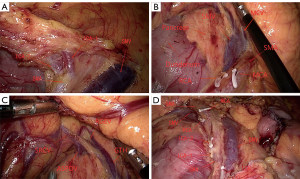 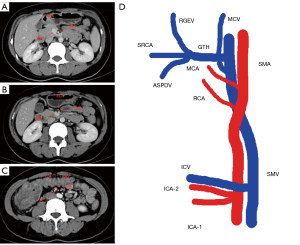 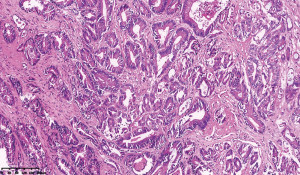 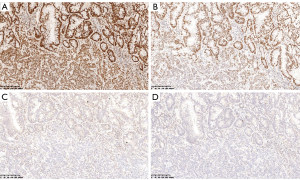 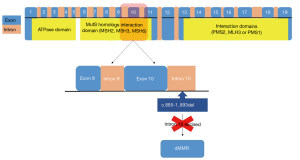 Figure 6 Results of next-generation sequencing of tumor DNA from the postoperative specimens showing loss of the MLH1 gene. A 9-base deletion occurred between the last base of intron 10 and the first 8 bases of exon 11 (c.885-1_893del), which led to deficient mismatch repair. dMMR, mismatch repair-deficient.

Laparoscopic CME for colon cancer has gradually become the standard surgical approach. Complete mesorectal excision has been shown to reduce the risk of local recurrence and improve long-term patient survival; however, the necessity of central vessel ligation introduces many difficulties for the surgeon. A previous study examined the occurrence of vascular variations in patients undergoing radical right hemicolectomy and noted that a failure to detect such variations may cause unexpected bleeding (4). Therefore, it is important to determine the possible vascular variations of the right colon. Although vascular variations in right hemicolectomy have been described by some previous studies, this study has described a patient with two variations in the vasculature of the right colon that have never before been reported in the literature: namely, the SMA and SMV were found to be accompanied like “X”-shaped variant and the ICA had two branches. We hope that sharing our discovery will expand the knowledge of such variations and will aid surgeons conducting minimal right hemicolectomy.

The SMA is mostly located on the left side of the SMV, and few studies have reported the variations of the SMA in the right-sided colon. Wu et al. found that the SMA was to the right of the SMV in 3 out of 60 cases of laparoscopic right hemicolectomy (5). Ultrasound is a non-invasive technique for abdominal vascular examination that can be easily performed. In their study, Menten et al. used ultrasound to detect the SMV in 80 children with a normal duodenum position and found only a single case in which the SMA was to the right of the SMV (6). In our patient, the initial SMA segment was to the left of the SMV and the distal SMA was to the right of the SMV, forming an “X”-shaped variant; this variation has not been published in the literature before. Some thinner SMA may be mistaken the for ICA, which, if removed, can lead to extensive ischemic necrosis of the small intestine. Some previous studies have reported that the ICA was consistently present in the right colon (7-9). However, Spasojevic et al. found that the ICA was absent in 2 out of 50 cases detected by multidetector CT angiography (10). Also, in Cirocchi et al.’s study, among 60 patients with malignant colonic cancer who underwent laparoscopic radical right colectomy and D3 lymph node dissection, there were 2 cases in which the ICA was absent, and the ICV was present in all 60 cases (11). Our paper is the first to report a case of two branches of the ICA originating from the SMA. This type of variation is rarely encountered during surgery and should be carefully identified to avoid unnecessary hemorrhage.

LS, also called hereditary non-polyposis colorectal cancer, is the most common inherited colorectal cancer syndrome, accounting for 2% to 5% of colorectal cancers (12). Our patient was diagnosed with ascending colon cancer before the age of 50 and had multiple family members confirmed to have colorectal cancer; thus, she met the revised Amsterdam criteria for LS. The patient’s postoperative immunohistochemistry results showed deletion of the MLH1 and PMS2 proteins. LS is mainly caused by missense, nonsense, insertion, or deletion mutations of the MLH1 and PMS2 genes, with MLH1 gene mutations accounting for 42% of cases (13). Deletions of MLH1 are mainly located in the first 10 exons (14). Complex mutations such as deletions and insertions of the MLH1 gene have been found in patients with LS (15). In the present case, the MLH1 deletion, as detected by next-generation sequencing, involved the last base of intron 10 to the first 8 bases of exon 11. In this case，we firstly report the colonic vascular variations in a patient with LS. To date, there is no report on the correlation between Lynch syndrome and vascular variations, which needs to be confirmed by large-scale clinical case studies.

In summary, we have described a case of novel vascular variations in a patient with ascending colon cancer who underwent laparoscopic radical right hemicolectomy: namely, the SMA and SMV were accompanied like “X”-shaped variant and there were two ICA branches. This report will contribute to the understanding of vascular variations in patients undergoing laparoscopic right hemicolectomy. Because our case involved a patient with ascending colon cancer with LS, we speculate whether the variations we have described are related to this syndrome. Further work and clinical trials need to be conducted on this matter in the future.

We would like to thank the surgical team in the gastrointestinal department and our colleagues in the pathology and radiology center at the Department of Gastrointestinal Surgery, The First Affiliated Hospital of Air Force Medical University.

Funding: This study was supported by the National Natural Science Foundation of China (grant No. 8207101617).

Reporting Checklist: The authors have completed the CARE reporting checklist. Available at https://atm.amegroups.com/article/view/10.21037/atm-22-3012/rc

Conflicts of Interest: All authors have completed the ICMJE uniform disclosure form (available at https://atm.amegroups.com/article/view/10.21037/atm-22-3012/coif). WD, DH and HZ are from 3D Medicines Inc. The other authors have no conflicts of interest to declare.

Ethical Statement: The authors are accountable for all aspects of the work in ensuring that questions related to the accuracy or integrity of any part of the work are appropriately investigated and resolved. All procedures performed in this study were in accordance with the ethical standards of the institutional and/or national research committee(s) and with the Helsinki Declaration (as revised in 2013). Oral informed consent was obtained from patient.