The concept of sepsis has been revised to an uncontrolled body response to infection leading to life-threatening organ dysfunction (1). For a long time, infection, systemic inflammatory response syndrome, sepsis, septic shock, and multiple organ dysfunction syndrome have been thought to be related to the different stages of the development of the same important pathophysiological process (2,3).

Septic cardiomyopathy is proposed in the guidelines for rescuing sepsis (4,5). For adult patients with septic shock, the use of a first-line vasopressor is recommended to administer norepinephrine. When accompanied by cardiac insufficiency, circulatory perfusion is unable to ensure sufficient volume and arterial blood pressure. It is recommended that dobutamine combined with norepinephrine or epinephrine alone be used. Fink et al. showed that dobutamine can improve liver perfusion after experimental shock (6). In comparing septic rats with or without dobutamine pretreatment, they found that dobutamine pretreatment can activate β1 adrenergic receptors and improve the survival rate, liver microcirculation, and liver function after sepsis. Similarly, dobutamine can protect renal function in patients with septic shock, improve renal perfusion, increase the glomerular filtration rate, and increase serum creatinine without significantly increasing urine volume and the fractional sodium excretion clearance rate. However, the timing of dobutamine use is not clear.

Additionally, a study by Mirouse et al., which aimed to explore the similarities and differences between tumors and sepsis, found that the 2 diseases have many related pathophysiological properties due to the inability of the body’s immune system to respond to injury (the former is caused by malignant cells, the latter is caused by the invasion of pathogens into the body), and the series of changes in the immune homeostasis of the 2 diseases may affect each other (7). In a previous study, Dimopoulos et al. found that a history of stage I or II solid tumors was an independent risk factor for 28-day mortality in sepsis (8). Further, Kim et al. showed that the 30-day and 1-year mortality rates were 52.1% and 81.3% in adult sepsis shock patients with cancer (9). There is also a lack of relevant research on the effect of dobutamine on septic shock patients with tumor.

The present study explored the therapeutic effect of dobutamine in the treatment of septic shock patients with tumors. We present the following article in accordance with the STROBE reporting checklist (available at https://atm.amegroups.com/article/view/10.21037/atm-22-3226/rc).

This was a retrospective comparative cohort study. This study retrospectively analyzed 122 septic shock patients with tumors at the Sun Yat-sen University Cancer Center from June 2008 to November 2021. Patients who were diagnosed with cancer, met the diagnostic criteria for septic shock (as per the sepsis 3.0 guidelines) and who received anti-tumor medical treatment were included in the study. Patients who suffered from previous severe heart failure, and severe liver and kidney insufficiency in combination with other autoimmune diseases were excluded from the study, as were those who died from acute coronary syndrome, epilepsy, acute cerebral infarction or cerebral hemorrhage and those who had rapid tumor progression due to the poor control of the primary tumor. The study was conducted in accordance with the Declaration of Helsinki (as revised in 2013). The study was approved by the Ethics Committee of Sun Yat-sen University Cancer Center (No. SL-B2021-410-01). Individual consent for this retrospective analysis was waived.

The drug manufacturer of dobutamine in this study was Shanghai Shangyao No.1 Biochemical Pharmaceutical Co., Ltd. The specification was 2 mL:20 mg. As recommended, 5% glucose solution or 0.9% sodium chloride injection was added to the dobutamine after dilution for micro-pumping. The dose range in this study was 0.62–4.68 µg/kg/min, and the average continuous pumping time was 5 days.

This study used the statistical analysis software SPSS (version 26.0) and R (version 4.0.2). We compared the measurement data using the Student’s t-test, and the count data using the χ2 test (or Fisher exact test as indicated). The survival curves were plotted using the Kaplan-Meier method, and the 28-day mortality differences were compared among the different groups of patients using log-rank tests. Additionally, the Cox proportional hazards regression model was used to calculate the hazard ratios (HRs) and 95%confidence intervals (CIs). P<0.05 indicated that the difference was statistically significant.

Baseline characteristics of the 122 sepsis shock patients with tumors

Baseline characteristics of the 122 sepsis shock patients with tumors 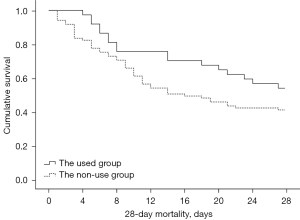 Figure 1 Comparison of the cumulative 28-day survival between the used group and the non-use group (log-rank test: χ2=2.576, P=0.109), classified by dobutamine use. 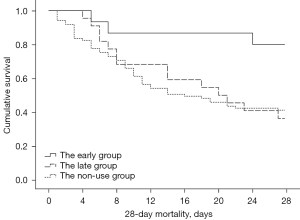 Figure 2 Comparison of the cumulative 28-day survival among the early group, the late group and the non-use group (log-rank test: χ2=5.591, P=0.018), classified by dobutamine use.

28-day mortality according to baseline characteristics

The duration of use of mechanical ventilation

Changes in heart rate and blood pressure in the administration group

Jeong et al. noted that a past history of diabetes or heart failure, a younger age, higher N-terminal pro-B-type natriuretic peptide (NT pro-BNP), and positive blood cultures are risk factors for septic cardiomyopathy (16). Unlike cardiomyopathy caused by other causes, myocardial damage caused by sepsis is usually reversible (17). Under conditions of adequate volume and arterial blood pressure, if circulatory perfusion is still insufficient in adult patients with septic shock, it is recommended that dobutamine plus norepinephrine or epinephrine alone be used (4). Conversely, the pathogenesis, diagnostic criteria, treatment of septic cardiomyopathy, and potential adverse effects of vasoactive drugs are controversial (18).

In our study, if the start time of dobutamine administration was not considered, the 28-day mortality of the medication groups was lower than that of the non-medication group, but the difference was not statistically significant. However, when comparing the start times of dobutamine administration, the early administration of the medication significantly reduced 28-day mortality (20.0%), at a rate that was much lower than that of other studies. Thus, we believe that dobutamine can provide more powerful circulatory perfusion support in the early stage of septic cardiomyopathy.

Hemodynamic tolerance to catecholamine vasopressors and inotropes is a well-established marker of mortality risk in septic shock (19-22). Kumar et al. showed that survival in patients with severe sepsis or septic shock is related to the maintenance of cardiac responsiveness to catecholamines and the improvement of cardiac function and the contractile index under dobutamine infusion (23). In our study, the early administration of medication reduced the 28-day mortality, improved the shock reversal rate, shortened the ICU stay, and decreased the duration of mechanical ventilation. Further, a prospective study by Zhou showed that in the early stage of acute respiratory distress syndrome caused by septic shock, dobutamine increased the cardiac output, reduced pulmonary edema in patients and reduced the required dose of norepinephrine (24). Fink et al. confirmed that dobutamine can improve liver function and hepatic microcirculation in septic shock (6). In a previous study, the dobutamine pretreatment group significantly improved the plasma clearance, hepatic perfusion index, and survival time of indocyanine green (6). However, through a statistical analysis of the Medical Information Mart for Intensive Care III public database, Zhu found that the in-hospital mortality rate of the dobutamine group was consistently higher than that of the non-dobutamine group (P=0.044) (25). The baseline characteristics were unbalanced between the 2 groups in this study (25). The heart rate, respiratory rate, MAP, and disease score of the medication group were higher than those of the non-medication group (P<0.05), which was the reason for the significant difference between the 2 groups [odds ratio (OR) 1.56, 95% CI: 1.01–2.40; P=0.000) (25).

Apart from dobutamine, there are 2 other types of drugs that are controversial in clinical practice (26-30). Liu et al. investigated the role of levosimendan and dobutamine in the treatment of sepsis (31). In Liu’s study, 6 randomized controlled trials (RCTs) were included, and 192 patients were selected through literature searches of multiple academic databases (31). After 24 hours of intervention, the cardiac index and left ventricular stroke work index levels of the levosimendan group combined with myocardial dysfunction were significantly better than those of the dobutamine group, and the blood lactate level was significantly lower (31). However, levosimendan had no statistically significant effect on left ventricular ejection fraction and mortality (31). Conversely, Bhattacharjee examined 7 RCTs and confirmed that levosimendan reduces the blood lactate level of patients with septic shock and increases the cardiac index of patients more than dobutamine, but found no significant differences in terms of mortality or ICU stay (32). Zhu et al. found that compared to the dobutamine group, the use of milrinone did not reduce in-hospital mortality in sepsis patients, but increased the ICU length of stay, total hospitalization time, and the rate of use of renal replacement therapy (33). In recent years, there have been some new studies on the treatment of septic cardiomyopathy, such as melatonin, to improve calcium overload (34-36), cyclosporine and its derivatives to regulate mitochondrial permeability, anti-apoptotic proteins (such as B cells leukemia protein) (37), all of which may become therapeutic targets for septic cardiomyopathy in the future.

Our research inevitably had limitations. First, this study was a retrospective study with a small sample from a single center. Thus, the conclusions are inevitably affected by bias. Second, because the duration of dobutamine use varied among the patients in this study, only changes in heart rate and MAP at the start of the administration of the drug, 1 day after the administration of the drug, and 2 days after the administration of the drug were selected as references. After the statistical analysis, we found that the patients’ heart rates showed a gradual downward trend, the MAP showed an upward trend, and norepinephrine showed a downward trend. Finally, in this study, we did not dynamically observe the vital signs and test indicators of septic shock patients with tumors, and only selected the worst score within 24 hours of entering the ICU as a reference. Thus, related pairing studies or RCT studies need to be conducted in the future.

The early administration of dobutamine may reduce 28-day mortality in septic shock patients with tumor.

Reporting Checklist: The authors have completed the STROBE reporting checklist. Available at https://atm.amegroups.com/article/view/10.21037/atm-22-3226/rc

Conflicts of Interest: All authors have completed the ICMJE uniform disclosure form (available at https://atm.amegroups.com/article/view/10.21037/atm-22-3226/coif). The authors have no conflicts of interest to declare.

Ethical Statement: The authors are accountable for all aspects of the work in ensuring that questions related to the accuracy or integrity of any part of the work are appropriately investigated and resolved. The study was conducted in accordance with the Declaration of Helsinki (as revised in 2013). The study was approved by the Ethics Committee of Sun Yat-sen University Cancer Center (No. SL-B2021-410-01). Individual consent for this retrospective analysis was waived.