Functional roles of epitranscriptomic marks in the cardiovascular system and disease: a narrative review

Heart is the first organ to mature during the development. It sustains the live of organism by serving as an engine for blood circulation. The main cell types of the heart include cardiomyocytes (heart muscle), endothelial cells, fibroblasts, smooth muscle cells, pericytes, immune cells (myeloid and lymphoid), adipocytes, mesothelial cells, and neuronal cells (1). Unlike fish and amphibians, the mammalian cardiomyocytes do not normally regenerate themselves shortly after birth (2). Thus, the developmental studies of heart as well as how its dysfunction leads to cardiovascular disease are the topics of intensive studies. The protein-centered research could not uncover all the gene regulatory and signaling pathways to sustain the healthy heart. The emergence of non-protein-coding RNAs (ncRNAs), especially microRNAs (miRNAs) and more recent long non-coding RNAs (lncRNAs), has shed a light on further dissecting the gene regulatory networks of the heart (3,4). Yet, the deaths related to cardiovascular disease still ranks the top among all causes of deaths in industrialized countries (5), calling for further understanding of cardiac gene regulatory networks. 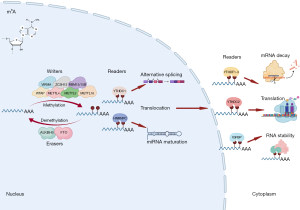 List of experimentally validated functions and mechanisms of epitranscriptomic enzymes

Pathological cardiac hypertrophy is a condition in which the heart enlarges in response to stresses, such as pressure overload or myocardial infarction, which progresses to heart failure (38). Understanding the cascade of events in maladaptive hearts is important for therapeutic purpose. Interestingly, the m6A level increased in hypertrophied cardiomyocytes (26). When a major component of the m6A methyltransferase complex, Mettl3, was overexpressed in neonatal rat ventricular cardiomyocytes, cardiomyocytes were hypertrophied, while the opposite effect was observed when silencing Mettl3. When Mettl3 was overexpressed in mice, cardiac hypertrophy was observed, while Mettl3 floxed mice crossed with the cardiomyocyte-specific cre-driver, Myh7-cre (also known as β-MHC cre), displayed signs of heart failure with aging and stress, suggesting the functional importance of Mettl3 in cardiac physiology.

Just as other readers of epitranscriptomic marks, m6A readers are RNA-binding proteins (RBP), which affects the mRNA stability and decay, leading to translational regulations (39). As these readers bind many RNAs, it is often difficult to pinpoint only one transcript been affected in a particular condition. Nevertheless, there are several targeted studies of m6A readers in cardiovascular system and disease. For example, when Ythdc1 floxed mice were crossed with the constitutive active, cardiomyocyte-specific cre-driver, α-MHC-Cre, homozygous Ythdc1 conditional knockout mice died around 10 weeks of age (27), suggesting its importance in postnatal cardiac function. The detailed analysis showed that Ythdc1-ablated mice displayed left ventricular chamber enlargement and severe systolic dysfunction, which are the hallmark of dilated cardiomyopathy, as well as decrease of cardiomyocyte contractility and disordered sarcomere arrangement. Mechanistically, it was found that Ythdc1 might be required for the proper splicing of sarcomeric protein, Titin.

Another m6A reader, YTHDF2, is also indicated to be involved in cardiac physiology. In both human and mice, the expression of YTHDF2 mRNA and protein, but not its family members—YTHDF1 or YTHDF3, are upregulated during the progression of heart failure (28). When challenged with transverse aortic constriction, Ythdf2 overexpressing mice attenuated cardiac hypertrophy. Mechanistically, YTHDF2 suppresses cardiac hypertrophy by recognizing m6A site on the myosin heavy chain 7 (Myh7) mRNA (also known as β-MHC, which is a marker for cardiac hypertrophy) to promote its degradation.

Discovered as human obesity-susceptibility gene (40,41), FTO (fat mass and obesity associated gene) is a m6A demethylase that is shown to be involved in cardiac physiology. In failing human, pig, and murine hearts, the expression of FTO was decreased, which coincided with the increased level of m6A marks and decreased cardiomyocyte contractile function (29). When challenged with a permanent ligation of the left anterior descending artery (a mouse model of myocardial infarction), the hearts of Fto overexpressing mice attenuated the pathological features of failing hearts (e.g., decreased cardiac contractile function). Mechanistically, Fto demethylates cardiac contractile mRNAs [e.g., natriuretic peptide A (Nppa, also known as ANP), Myh7, ATPase sarcoplasmic/endoplasmic reticulum Ca2+ transporting 2 (Atp2a2, also known as Serca2a), and ryanodine receptor 2, cardiac (Ryr2)] to prevent their mRNA degradation and promote their protein expression to preserve cardiac functions in the infarcted hearts. However, there is still an ongoing debate as to the validity of FTO as m6A eraser as it targets N6,2'-O-dimethyladenosine (m6Am, which is a modification found adjacent to the mRNA cap) instead of m6A (42). Thus, more research is needed to firmly confirm the functional role of FTO in the context of m6A marks.

Although the adult mammalian cardiomyocytes are terminally differentiated without capacity for regeneration, neonatal murine hearts can regenerate within the first week after birth when challenged with apical resection or myocardial infarction, mediated by cardiomyocyte proliferation (43). A recent study shows that the m6A eraser, ALKBH5, plays a role in cardiac regeneration as the neonatal Alkbh5 knockout mice fail to regenerate their hears after apical resection, while overexpression of Alkbh5 in juvenile (7 days old) and adult (8 weeks old) mice promoted cardiomyocyte proliferation after myocardial infarction (30). In vitro, overexpression of ALKBH5 enhanced mitosis in human induced pluripotent stem cell-derived cardiomyocytes. Mechanistically, ALKBH5 stabilizes the m6A reader YTHDF1 mRNA in a m6A dependent manner, thereby promoting the translation of Yes1 associated transcriptional regulator (YAP1, also known as YAP), which is a downstream effector of the Hippo pathway that is important for cardiomyocyte growth.

Adenosine to inosine (A-to-I) RNA editing is a conversion of A into I via the catalytic reaction of adenosine deaminase acting on RNAs (ADARs) by binding to double-stranded RNA (44) (Figure 2). RNA editing affects RNA metabolism by alterning splicing, miRNA biogenesis and binding, amino acid conversion, lncRNA binding and structures, RNA stability, and translation. Compared to m6A marks, RNA editing occurs most frequently in introns and 3’-untranslated regions (UTR) as both epitranscriptomic marks target the same nitrogen-6 position of A (45); thus, they are in a reciprocal relation. Unlike m6A, RNA editing is an irreversible process with no known reader to date. In mammals, there are three ADAR genes: ADAR (ADAR1), ADARB1 (ADAR2), and catalytically inactive ADARB2 (ADAR3). The mutation in the human ADAR1 gene is known to cause of the Aicardi-Goutières autoimmune disease (46), while the accumulation of ADAR1 protein was observed in atherosclerotic plaques (47), which are the most common cause of coronary artery diseases. In mice, the whole body knockout of Adar1 results in embryonic death due to massive apoptosis and aberrant interferon induction (31), which can be rescued to live birth by ablating the RIG-I-like receptors, mitochondrial antiviral signaling protein (Mavs) or interferon induced with helicase C domain 1 (Ifih1, also known as Mda5) (48-50). Interestingly, these massive apoptotic events are most visible in the embryonic heart, which the recent study crossing Adar1 conditional knockout mice with the early cardiac specific cre-driver, Nkx2.5-Cre, resulted in embryonic death due to increased apoptosis and reduced proliferation in developing cardiomyocytes (32) (Table 2), suggesting that Adar1 is important in regulating the cardiomyocyte survival and proliferation. Because NK2 homeobox 5 (Nkx2-5) gene is also expressed in other cell type (i.e., endothelium) and tissue types (tongue, thymus, and spleen) during embryonic development (51), it is possible that the ablation of Adar1 in early cardiac field may not be specific for cardiomyocytes. However, another recent study crossing Adar1 conditional knockout mice with the endothelial-specific cre driver, VE-Cadherin-Cre (Chd5-Cre), demonstrated that the ablating Adar1 in endothelial cells did not result in embryonic death, instead postnatal death due to growth retardation within three weeks after birth for 75% of neonates (52). To further confirm the important role of Adar1 in cardiomyocytes, another study crossing Adar1 conditional knockout mice with the tamoxifen-inducible cardiomyocyte specific cre-driver, αMHC-MCM, showed that ablating Adar1 in adult cardiomyocytes resulted in increased lethality due to increased endoplasmic stress leading to apoptosis and reduction in miRNA levels, especially miR-199a-5p that regulates unfolded protein response (UPR) (33). Taken together, these studies demonstrate that Adar1 in murine cardiomyocytes is important for development and physiology of the heart. 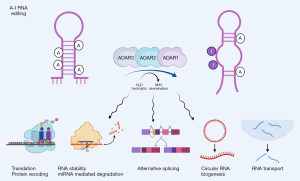 Compared to ADAR1, ADAR2 is more specific in its targets [i.e., glutamate ionotropic receptor AMPA type subunit 2 (GRIA2, also known as GluR2) pre-mRNA editing at Q/R site (53)], which demonstrated to be very useful for RNA-based genome editing by fusing the catalytic domain of ADAR2 to CRISPR-Cas13b enzyme to perform A-to-I conversion in RNA transcripts (54). In mice, the expression of Adar2 was induced in exercised hearts (34). In vitro, overexpression of Adar2 inhibited doxorubicin-induced apoptosis in neonatal rat cardiomyocytes, while silencing of Adar2 resulted in increased apoptosis. When Adar2 was overexpressed in a cardiac specific manner, it protected murine hearts from acute myocardial infarction by negatively regulating mature miR-34a, suggesting that Adar2 could be a potential therapeutic target for cardiovascular disease (34). 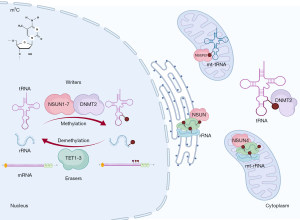 Figure 3 Mechanism of 5-methylcytosine (m5C) modification. This modification is introduced by RNA m5C methyltransferases, and it is abundant in rRNA/mt-rRNA, tRNA/mt-tRNA as well as mRNA and ncRNA. The writers DNMT2 and NSUN3 methylate tRNA, while Nsun4 methylates rRNA. The methylation is reversible by the functions of erasers TET1-3. Created with BioRender.com.

Another m5C writer, Nsun4, is also important in cardiomyocytes. Crossing Nsun4 conditional knockout mice with the muscle-specific (both cardiac and skeletal muscles) cre-driver, Ckmm-Cre, it was found that ablation of Nsun4 resulted in shorter lifespan (death within the age of 25 weeks) with progressive cardiomyopathy based on the increased heart to body weight ratio, leading to mitochondrial dysfunction caused by impaired biogenesis of the respiratory chain complexes (36). Mechanistically, Nsun4 is a dual function protein, which methylates 12S rRNA and forms a complex with the mitochondrial protein, mitochondrial transcription termination factor 4 (MTERF4), to regulated mitoribosomal assembly.

Besides cardiomyocytes, m5C marks are also important in endothelial functions. Using TALEN-mediated knockout of m5C writer, Nsun2, in rats demonstrated that ablation of Nsun2 impaired the formation of allograft arteriosclerosis (hardening of the arteries) in a model of aortic allograft by transplanting thoracic aortic allografts of wildtype or Nsun2 knockout rats into the abdominal aorta of donor rats, suggesting that Nsun2 is important for neointima formation (37). Mechanistically, Nsun2 methylates intercellular adhesion molecule 1 (Icam1) mRNA to promote its translation, thereby increasing the adhesion of leukocytes to endothelial cells to regulate vascular endothelial inflammation and atherosclerosis.

Funding: This work was supported by a grant from the Novo Nordisk Foundation (No. NNF18OC0033438).

Conflicts of Interest: Both authors have completed the ICMJE uniform disclosure form (available at https://atm.amegroups.com/article/view/10.21037/atm-22-1074/coif). SU serves as an unpaid editorial board member of Annals of Translational Medicine from November 2021 to October 2023. MI has no conflicts of interest to declare.