Gastric cancer (GC) is among the world’s most common cancers. There are approximately 1,000,000 new cases and at least 780,000 deaths reported each year worldwide (1). Annually, there are about 498,000 GC-related deaths in China, with more than 679,000 new cases reported each year (2). With advances in chemotherapy, targeted therapy, and immunotherapy, GC incidence and mortality have dropped significantly in the past 50 years; however, the 5-year survival rate remain low (<10%) because of low rates of early diagnosis and poor prognosis (3). Surgery is currently considered the only treatment modality. About 80% of GC patients are preliminarily diagnosed with local advanced or metastatic disease and miss the best surgical window due to late diagnosis (3,4). For patients with unresectable GC, chemotherapy has been regarded as a standard therapy. Platinum-based and fluoropyrimidine-based combination therapies are recommended as the first-line treatment globally (5). However, there are limited treatment options when patients fail first-line therapy. In China, regardless of HER2 status, mono-chemotherapy regimens including docetaxel, paclitaxel, or irinotecan—are grade I recommended, followed by two-drug chemotherapy regimens as grade II recommendations, such as irinotecan plus 5-fluorouracil (5-FU) and paclitaxel/docetaxel plus 5-FU unfortunately all had poor outcomes (6). Thus, an urgent unmet need for second-line treatment options emerges for Chinese advanced GC patients.

Anti-angiogenic therapy has demonstrated efficacy in lung, breast, brain, renal, and colon tumors. Vascular endothelial growth factor (VEGF) and VEGF receptor 2 (VEGFR2)-mediated signal transduction and angiogenesis play dominant roles in the pathogenesis of GC. Ramucirumab, an anti-VEGFR2 monoclonal antibody, combined with paclitaxel significantly increased overall survival (OS) compared with placebo plus paclitaxel in a global, phase III trial, which supported the combination of anti-angiogenic therapy and chemotherapy for treatment of previously treated advanced GC. Based on this result, the Food and Drug Administration (FDA) approved ramucirumab, as a second-line treatment of metastatic GC (7). Recently, ramucirumab plus paclitaxel proved its anti-tumor effect in a predominantly Chinese population with advanced GC (8). However, so far, it is not available for patients in China.

Apatinib, a small molecular oral tyrosine kinase inhibitor (TKI), mainly targeting VEGFR2, has been approved in China for the treatment of advanced GC (9). A phase III trial reported that apatinib improved the OS of patients with heavily pretreated gastric or gastroesophageal junction adenocarcinoma compared with the placebo (9). In a prospective observational study in China, apatinib exhibited satisfactory efficacy and safety of advanced or metastatic GC in the real-world (10). In a study of the second-line treatment of patients with advanced GC, the combination of apatinib and docetaxel was found to have superior antitumor activity and manageable toxicity compared with docetaxel monotherapy (11). But whether combinations of apatinib with other chemotherapies are feasible in advanced GC remains unknown and possible adverse effects of these combinations need to be explored. The aim of the present study was to assess the efficacy and safety of apatinib combined with chemotherapy as a second-line treatment for gastric or gastroesophageal junction adenocarcinoma. We present the following article in accordance with the TREND reporting checklist (available at https://atm.amegroups.com/article/view/10.21037/atm-22-2752/rc).

The study was a single-arm, open-label, prospective, multicenter study conducted at 9 centers in Jiangsu province, China and was registered at the Chinese Clinical Trial Registry (No. ChiCTR-OON-1600971). Patients who met the eligibility criteria were enrolled and received 250 or 500 mg oral apatinib and chemotherapy regimens, including docetaxel, paclitaxel, tegafur, oxaliplatin, and capecitabine. Each treatment cycle was 28 days (4 weeks). A maximum of 2 dose reductions was allowed, with a dose not lower than 250 mg once per day. The treatment continued until PD or intolerable AEs, or the patient withdrew consent to continue with the study.

During post-discontinuation follow-up, all patients were followed for survival until PD, death, or study completion. For those patients who discontinued the study treatment for reasons other than PD, tumor assessment should be performed every 8 weeks.

The primary outcome was OS; that is, the time from entry to death or last follow-up. Secondary outcomes were objective response rate (ORR), disease control rate (DCR), and progression-free survival (PFS), which is the time from entry to PD or death of any cause and quality of life. The ORR consisted of the complete response (CR) and partial response (PR); the DCR consisted of the CR, PR, and stable disease (SD).

Tumor response and progression were assessed according to RECIST 1.1. Tumor assessments were performed at baseline, and then every 2 cycles. AEs were graded following the National Cancer Institute common terminology criteria for AEs (NCI-CTCAE 4.0).

This was a single-arm study, and the primary endpoint was OS. To calculate the sample size, OS of 3.02–5.31 months was expected. Under the power (1−β) of 0.8, a sample size of 29 patients sufficed to attain 80% probability in achieving the 95% confidence interval (CI) of the OS range. Demographic data, outcome data, and other clinical parameters were summarized. Categorical variables were presented as frequency, and continuous variables were presented as the mean ± standard deviation. Clinical and laboratory parameters were reported with descriptive statistics. OS and PFS rates were calculated using the Kaplan-Meier method with 95% CIs. All statistical analyses were performed using SPSS (version 22, IBM). All P values were two-sided. P values of <0.05 were considered statistically significant.

Baseline characteristics of all enrolled patients 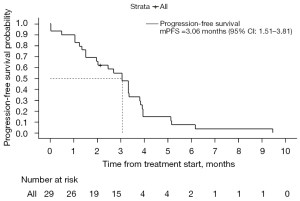 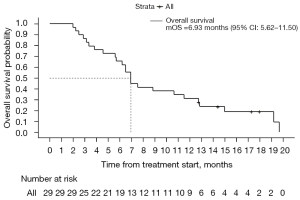 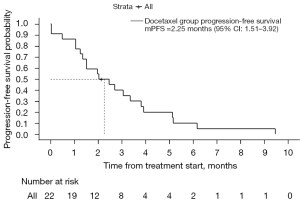 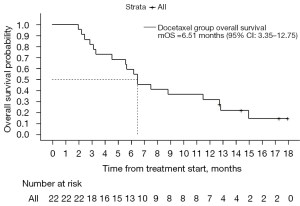 The prognosis of advanced or metastatic GC remains poor. Therapeutic regimens are limited after first-line standard chemotherapy, which are 2- or 3-drug combinations of platinum-based and fluoropyrimidine-based chemotherapies (12-14). Therefore, in the present open-label, prospective, multicenter study, we investigated the clinical efficacy and safety of second-line apatinib plus chemotherapy for advanced GC treatment. Apatinib has been approved as a third- or later-line GC treatment in China, and has been found to show obvious antitumor ability in real-world clinical experience when used a second-line treatment (10).

For the second-line treatment of GC, National Comprehensive Cancer Network (NCCN) guidelines recommend chemotherapeutic drugs, such as paclitaxel and irinotecan, as well as anti-angiogenesis agents, such as ramucirumab (15). In a phase II study, chemotherapy resulted in a median PFS of 2.2–3.6 months and a median OS of 5.8–9.5 months in second-line treatment (16). The RAINBOW study showed that ramucirumab alone or ramucirumab combined with paclitaxel provides clinical benefits, with a median OS of 5.2–9.6 months (7). In the present study, the median PFS was 3.06 months (95% CI: 1.51–3.81 months) and the median OS was 6.93 months; the ORR and DCR were 18.52% and 92.59%, respectively. These data were comparable with second-line chemotherapy (16), and ramucirumab (7). The median OS of patients administrated apatinib combined with docetaxel in our study (6.51 months) was longer than that of docetaxel alone (5.2 months) (17).

A similar study revealed a PFS of 4.1 months and an OS of 8.5 months for apatinib alone or combined with chemotherapy as a second-line treatment for advanced cancer (11). These outcomes were better than those of the present study, possibly due to our smaller sample size and poor patient status. The ECOG PS in the present study was 0–2, and patients with an ECOG PS of 2 accounted for approximately 1/3. No patient had an ECOG PS of 0. Patients with ≥2 metastatic sites accounted for 2/3 in the present study. A cohort study indicated that ECOG PS >0 and >2 metastasis sites were related to shorter survival and higher mortality of metastatic GC (18), which was consistent with our findings.

A preclinical study showed that apatinib could inhibit the efflux function of multiple adenosine-5'-triphosphate (ATP)-binding cassette transporters, such as ATP-binding cassette subfamily B member 1 (ABCB1) and ATP-binding cassette subfamily G member 2 (ABCG2) function, to reverse multidrug resistance, inducing raised intracellular concentrations of substrate chemotherapeutic agents (19). The combination of apatinib and paclitaxel demonstrated a significant inhibitory effect on tumor growth compared with animals administrated saline, paclitaxel, or apatinib alone (P<0.05) (19), which was also enhanced by the present study that the OS of patients who received apatinib in combination with docetaxel is longer than docetaxel alone (17).

We prescribed apatinib at an initial dose of 500 or 250 mg, lower than the recommended dosage in GC of 850 mg daily in previously published studies (10,20). Because of serious AEs at 850 mg, the dosage was reduced to 500 or 250 mg during therapy for most patients in the present study. Our study also supplied clinical application of apatinib in GC at low-dose.

Hypertension, proteinuria, and palmar-plantar erythrodysesthesia syndrome were most commonly observed in anti-angiogenic treatment (21-23). The primary AEs in our study were hypertension (24.1%), followed by and white blood cell decrease (24.1%) and anemia (20.7%), which might be caused by chemotherapy.

Apatinib in combination with chemotherapy was an effective and safe therapy for the second-line treatment of patients with advanced GC. The findings of the present study also provide insight into screening GC patients who are best suited to combination therapy of apatinib with docetaxel.

The authors would like to extend their gratitude to all the patients who participated in this study, and their families, the investigators, study coordinators, operation staff, and the project team who worked on this study. The authors would also like to thank Yaqi Li (Jiangsu Hengrui Pharmaceuticals Co., Ltd.) for her contribution to the manuscript writing and revision.

Funding: This work was financially supported by the National Natural Science Foundation of China (grant Nos. 81972822 and 81972313), Wu Jieping Medical Foundation (No. 320.6750.19060), the Cancer Research Foundation of the Chinese Society of Clinical Oncology (No. Y-HR2016-025), and the Postgraduate Research and Practice Innovation Programs of Jiangsu Province (No. JX10413778).

Reporting Checklist: The authors have completed the TREND reporting checklist. Available at https://atm.amegroups.com/article/view/10.21037/atm-22-2752/rc

Conflicts of Interest: All authors have completed the ICMJE uniform disclosure form (available at https://atm.amegroups.com/article/view/10.21037/atm-22-2752/coif). The authors have no conflicts of interest to declare.