It has recently been shown that older Hong Kong Chinese women have a much lower prevalence and severity of osteoporotic vertebral fracture (OVF) than age-matched Rome Caucasian women (1-3). In one study, we compared spine radiographs (T4–L5) from two epidemiological studies conducted in Hong Kong [MsOS(Hong Kong) n=200] and in Rome (Roman Osteoporosis Prevention Project, n=200, age-matched subjects with both mean age: 74.1 years and range: 65–87 years). The results show Chinese community subjects had ECF (endplate and/or cortex fracture) in 26% cases involving 3.54% of the vertebrae, while Rome Caucasian community subjects had ECF in 47% cases involving 8.21% of the vertebrae. Radiographic OVF with ≥40% vertebral height loss was recorded among 9.5% of the Chinese subjects, while among 26% of the Italian subjects. Radiographic OVF in Italian subjects tended to be more severe, more likely to be multiple. It has been noted that osteoporotic subjects have increased bone marrow fat (BMF) content and higher lumbar BMF can be associated with prevalent vertebral fracture even after adjustment for bone marrow density (BMD), and increased bone fat content itself can be a contributor to diminished structural bone integrity (4-12). For these reasons, we hypothesize that older Italian Caucasian women might have a higher lumbar BMF than older Chinese women. We conducted a preliminary study to see whether this is indeed the case.

The study was carried out complying with the World Medical Associations Declaration of Helsinki-Ethical Principles for Medical Research involving Human Subjects (as revised in 2013). The study was approved by the institutional Ethics Committees board of the Chinese University of Hong Kong and Sapienza University of Rome, and written informed consent was obtained from all subjects. The study participants information is illustrated in Figure 1. In this study, we recruited 16 community-based Caucasian female volunteers (range: 67–84 years) in Rome, Italy. None of the volunteers had notable spine disease and recent back pain history. In addition, there were consecutive 61 Rome Caucasian female patients with low back pain seeking MR examination. During data analysis, to match the age of Italian volunteers (one case aged 84 years excluded), a subgroup of Italian patients was defined which had an age distribution of 68–74 years. The Chinese subjects were from the MsOS(Hong Kong) study, which was an epidemiological research to study bone health among community dwelling Hong Kong Chinese women aged ≥65 years. The recruitment plan was designed so that the participants would represent the general elderly population in Hong Kong (3). At baseline all Hong Kong subjects were required to be able to walk without assistance, without bilateral hip replacement, and have the potential to survive the duration of primary study for at least 4 years as judged by their pre-existing medical status. 103 MsOS(Hong Kong) study subjects had MR spectroscopy to assess L3 (third lumbar vertebra) BMF during the period of Aug 27, 2004, to Feb 20, 2005. To have MR exam was on a voluntarily basis and the enrolment favored those who were recruited into MsOS(Hong Kong) study during the early phase. The MRI period was approximately halfway between baseline study and 4-year follow-up according to the plan of the MsOS(Hong Kong). Back pain history was asked whether the study participants had back pain during the past 12 months. A question was asked: ‘during the past 12 months, have you had any back pain’. Back pain history was collected during the baseline and 4-year follow-up studies, but not during the MR study. For this, 23 Chinese subjects did not report back pain during both baseline and 4-year follow-up studies and were classified as Chinese subjects without back pain (Figure 1).

In Rome, MR exams of the lumbar spine were conducted on a 3-Tesla scanner (GE Discovery 750; Milwaukee, USA). Point resolved spectroscopy (PRESS) sequence based 1H-MRS was acquired with single voxel size of 15×15×20 mm3 in the center of L3 body. The parameters of PRESS 1H-MRS were: TE (time of echo): 37 ms, TR (time of repetition): 3,000 ms, 64 averages without water suppression, sweep width: 5,000 Hz, data points: 4,096. To eliminate potential confounding factors due to the surrounding signal, six outer volume saturation bands were used. Default auto shimming as provided by the manufacturer was also applied. Spectroscopy data were analyzed using software (SAGE Dev2 0017.1, GE Healthcare). In Hong Kong, MR exams of the lumbar spine were conducted on a 1.5T scanner (Gyroscan ACS-NT; Philips, Best, The Netherlands). 1H-MRS voxel size was 20×20×20 mm3 and also placed in the center of L3 body. Data were acquired with PRESS sequence at a spectral bandwidth of 1,000 Hz with 512 data points. Other parameters of PRESS 1H-MRS were: TE: 25 ms, TR: 3,000 ms, 64 averages without water suppression. Spectroscopy data were analyzed using MRUI software package. For both Rome and Hong Kong studies, none of the L3 had fractures or other apparent focal lesions. Vertebral BMF was defined as the relative fat signal intensity amplitude in terms of a percentage of total signal intensity amplitude (water and fat), was calculated according to the following equation: BMF = SIfat/(SIfat + SIwater), where SIfat and SIwater are the peak amplitudes of fat (4.65 ppm) and water (1.3 ppm), respectively. Fat and water signal intensity amplitudes were not corrected for T2 decay and no T1-dependent saturation correction was performed as a relatively long TR was used. Statistical comparisons were processed using GraphPad Prism (San Diego, CA, USA). Comparisons between two groups were performed using Mann-Whitney U test, and multiple groups using analysis of variance test for linear trend. Pearson test was used for correlation analysis. A P value of less than 0.05 was considered statistically significant. 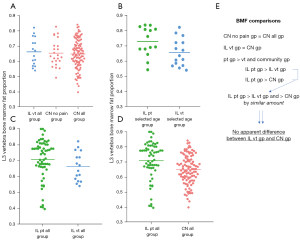 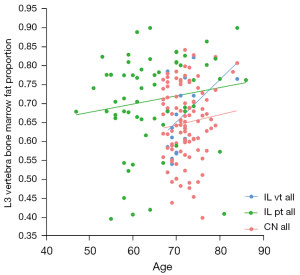 The analyses above show there was no apparent difference in L3 BMF among Italian community-based volunteers and Hong Kong Chinese community-based subjects. Italian back pain patients had about 11% higher L3 BMF content than Hong Kong Chinese community subjects, this could be explained that overall back pain patients might have a higher BMF than community subjects (Figure 2). That Italian patients with back pain had a higher lumbar BMF than that of healthier community subjects is not a surprising finding, though we could not propose a precise explanation for the associated mechanisms. Since the Italian patients sought medical attention with MRI, it is likely that their back pain severity was higher than that of Chinese participants who complained back pain during the survey.

There are many limitations for our current analysis. This is an ad hoc comparison of available data, rather than a prospectively designed study. The sample size was small particularly for the Italian volunteers. Another concern is whether the MRS analysis in Rome can be compared with the MRS analysis in Hong Kong. Two major differences were that Rome data were acquired at 3-T with TE of 37 ms, while the Hong Kong data were acquired at 1.5-T with TE of 25 ms. It is likely that the ratios of fat peak and water peak from 3-T data and 1.5 data would be comparable (13-15). Artz et al. (14) and Kang et al. (15) showed that MRS derived fat-fraction estimates in the liver were reproducible across different scanner platforms and field strengths (1.5-T and 3-T). However, when the fat content is very low, 3-T scanners may measure fat fraction higher than 1.5-T due to the associated better spectrum resolution at 3-T. Venkatesh et al. (16) reported that the mean fat-signal fraction was similar at 3T and 1.5T (1.11%±1.18% vs. 1.00%±1.09%) in ex vivo studies but were significantly different in the in vivo studies (2.47%±1.46% vs. 1.56%±1.34%). In our studies, fat and water signal intensity amplitudes were not corrected for T2 decay and no T1-dependent saturation correction was performed. In both Rome and Hong Kong studies, long TR was used. Generally speaking, when short TE is used for spectroscopy, the need for T2 correction is less. Theoretically, the water peak is attenuated with increasing TE values, whereas the fat peak does not show a similar change (17,18). Therefore, compared with results with a shorter TE (such as those with 25 ms in the Hong Kong study), results with a longer TE (such as those with 37 ms in the Rome study) will be associated with an elevated relative fat peak. Therefore, compared with the results from Hong Kong, the BMF in Rome might have been estimated relatively higher to a small extent (17,18). This point also argues against our initial hypothesis that older Italian women may have a higher lumbar BMF than that of older Chinese women.

In conclusion, on one hand, we admit that the participant number in this study is too small to allow us to draw precise conclusions which address small differences. On the other hand, considering the OVF prevalence in older Italian Caucasian women is almost double that of older Chinese women (1-3), minor BMF difference, if even exists, cannot fully explain the OVF prevalence and severity differences between Caucasian Italian and Hong Kong Chinese. Another interesting finding from this study is that patients with back pain had a higher lumbar BMF than that of healthier community subjects.

Provenance and Peer Review: This article was a standard submission to the journal. The article has undergone external peer review.

Conflicts of Interest: All authors have completed the ICMJE uniform disclosure form (available at https://atm.amegroups.com/article/view/10.21037/atm-22-808/coif). The authors have no conflicts of interest to declare.

Ethical Statement: The authors are accountable for all aspects of the work in ensuring that questions related to the accuracy or integrity of any part of the work are appropriately investigated and resolved. The study was carried out complying with the World Medical Associations Declaration of Helsinki-Ethical Principles for Medical Research involving Human Subjects (as revised in 2013). The study was approved by the institutional Ethics Committees board of the Chinese University of Hong Kong and Sapienza University of Rome, and written informed consent was obtained from all subjects.