Every scientific paper on lung cancer epidemiology should start from a citation of Isaac Adler’s monograph published over a century ago: “Is it worthwhile to write a monograph on the subject of primary malignant tumors of the lung? In the course of the last two centuries an ever-increasing literature has accumulated around this subject. But this literature is without correlation, much of it buried in dissertations and other out-of-the-way places, and, with but a few notable exceptions, no attempt has been made to study the subject as a whole, either the pathological or the clinical aspect having been emphasized at the expense of the other, according to the special predilection of the author. On one point, however, there is nearly complete consensus of opinion, and that is that primary malignant neoplasms of the lungs are among the rarest forms of disease.” (1).

Half of a century was enough to see the lung cancer prevalence rising. Quickly the disease was linked to tobacco smoking (2). During the last 100 years this “rarest form of disease” became to be the most frequent cause of cancer death in men and in some parts of the world also in women (North America, Eastern Asia, Northern Europe, Australia and New Zealand) (3). Main reason for the epidemics has been tobacco smoke, what was proven by many historical studies both on the population (4), and biological (5) level. The cause effect relationship between tobacco smoking and lung cancer occurrence is a dose-response one (6).

Diminishing of tobacco smoking prevalence can bring tangible benefits, what was demonstrated in the theoretical model (7,8), but also in empirical studies (9,10). However, in global perspective one can observe a growing trend of tobacco consumption (11), especially in developing countries (China, India) (12,13). The discussion is open whether the modern technologies in medicine can support public health efforts to control lung cancer mortality through secondary prevention. Most important here is the harms-benefit trade-off of lung cancer screening.

Only one sixth of the world population is covered by population-based cancer registries, and one third by death certification system (14), what limits incidence analysis and makes mortality analysis proximate. Because of high fatality of lung cancer (the overall ratio of mortality to incidence is 0.87) and the very small variability in survival in different world regions (15), mortality data closely follows incidence data (3). Therefore in our review we used mortality data from the WHO mortality database (16) and results of analyses presented in Cancer Mortality Database (14). All presented rates are age standardized (ASRW), unless indicated differently.

Prediction of lung cancer mortality rates and number of deaths was presented for several countries, where data were available (14). Europe was presented a little more in detail considering good data availability and some specificity of the region (for half a century the continent was divided politically and economically). In AFRO and SEAROs there is no sufficiently good quality data what made impossible to present predictions of lung cancer mortality for the following two decades (16). For SEARO there were presented predictions for number of deaths for some countries (16). African countries are represented by the African region as a whole.

How many lung cancer deaths are there?

In 2012 about 1.6 million people died due to lung cancer worldwide, majority in less developed countries (63% in men, 57% in women), although mortality rates in men are almost 1.4 times higher in more developed countries, in women about 1.5 times higher (Table 1). When particular regions are taken into account the biggest number of lung cancer deaths is noted in WPRO countries (48% in men, 45% in women), EURO takes second place (26% in men, 21% in women). 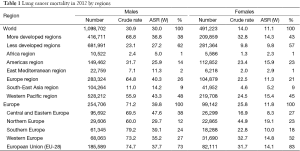 Figure 1 Lung cancer deaths in 2012 by regions, both sexes.

Lung cancer before the age of 44 is extremely rare in both sexes (1–8% deaths depending on the region, about 3% deaths worldwide) (Figure 2). The highest percentage of deaths in 45–64 years age group is observed in AFRO, EMRO and SEAROs (16–17%), moreover it is higher by 6–10 percentage points (pp) than in remaining regions. Similarly in middle-age (54–64 years) the percentage of deaths was highest in AFRO, EMRO and SEAROs (about 30%) whereas in European countries or Americas the percentage was lower by 10 pp. In all regions lung cancer deaths between the age 65 and 74 averaged about 30%. In countries of WPRO, EURO and PAHO over one third of lung cancer deaths occur after the age of 75, in the remaining regions it does not reach beyond 20% in this age group. 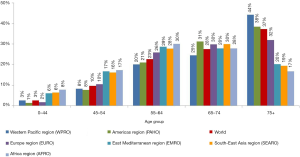 Figure 2 Percentage distribution of deaths over age groups by regions (both sexes). 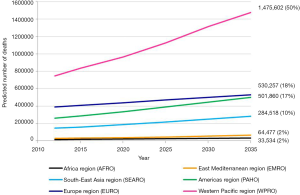 Figure 4 Prediction of lung cancer deaths by region up to year 2035. 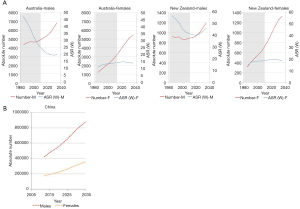 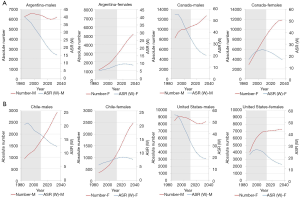 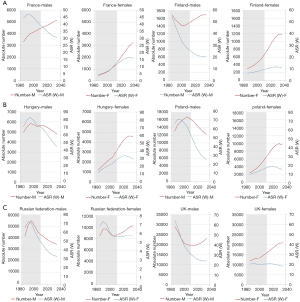 What is the impact of tobacco smoking?

Observed variations in lung cancer rates and trends largely follow differences in tobacco epidemic (19) because smoking accounts for about 80% of global lung cancer deaths in men and 50% of the deaths in women (20). Results of recent analysis conducted by Bilano et al. show that trends in current tobacco smoking prevalence vary between WHO regions and that several low- and middle-income countries are at risk of intensifying tobacco epidemic (11). From 2000 to 2010, majority of analysed countries experienced decreases in prevalence for both males and females. On this basis, decreases for years 2010–2025 are projected for most countries in almost all regions except AFRO for men and the Eastern Mediterranean (EMRO) for both men and women. High probabilities of decrease in current smoking prevalence are predicted for most countries in the Americas (AMRO) for both men and women. For European men, 15 (48%) high-income countries had a high probability of reduction, compared with only 4 (24%) low-income or middle-income countries, suggesting that within-region income inequalities remain an issue in tobacco control (11).

An observation of changes in smoking rates in several countries confirms that smoking patterns differ among representatives of WHO regions and can explain observed differences in tobacco-attributable cancer mortality rates and crude numbers.

In EURO region, decline in prevalence of tobacco use was observed in last decades, especially in countries of western, northern and central Europe. In Finland, France, UK and Poland prevalence of smoking has decreased by 8–43 pp among males and by 6–17 pp in female population (21-25). However, the patterns of smoking prevalence and the rate of decline differ between countries, and were higher in UK than in France (22-24). While Poland observed significant decline in last decades (25), in Hungary still 43% of adult males and 29% of females reports smoking on daily basis (23,26). In Ukraine, 45% of males and 9% of females smokes daily (27).

In EMRO countries that participated in the GATS study (Egypt and Qatar) tobacco smoking is a health problem that mainly concerns adult male population. According to GATS Egypt, in 2009 daily smokers constituted 35% of males and only 1% of females aged 15 years or older. Prevalence of adult smoking was at the same level according to data from 1998 (28). In Qatar, where GATS was conducted in year 2013, 16% of males and 2% of females smoked daily (29).

Tobacco-related statistics vary between countries in WPRO region. Decline in smoking prevalence both in male and female population was observed in both Australia and New Zealand, where current smoking rates in total population amounted respectively to 17% (in year 2011) and 24% (in year 1996) (30-32). In China, tobacco smoking rates are increasing since 1980s, particularly in male population (33). In a recent GATS study, 45% of males and 2% of females reported daily smoking (12).

In AMRO region prevalence of smoking differs among countries. USA and Canada observed a significant reduction in smoking rates in last decades, as current smoking is reported by 24% of males in USA and 19% in Canada. Among females those percentages amount to 18% and 15% respectively (37,38). In Central and Southern America prevalence of smoking varies between countries. In Argentina 29% of males and 16% reported daily smoking in GATS study [2013] (39), while in Mexico, respective percentages were 12% and 4% (40). Smoking rates for both sexes are substantially higher in Chile, where 44% of males and 37% of females reported current smoking (41). While a decline in smoking rates was observed in Argentina, in Chile none positive changes were identified in last decades (39,42).

Due to lack of available recent data and representative studies dedicated to tobacco use it is hard to assess the smoking prevalence in AFRO region. In 2012, GATS study has been carried out in Nigeria, where 6% of males and less than 1% (0.3%) of females reported daily smoking (43). In Algeria, daily smoking was recently reported by 25% of adults (44).

In many western countries, where tobacco epidemics was on the rise since the beginning of 20th century and peaked in its half (in the US, UK, Canada and Australia) or a bit later (France, Finland, Poland), the increasing trend of lung cancer incidence in men reversed or reached plateau. Despite the predicted further decrease of incidence rates, the absolute number of lung cancer deaths in men in these countries will continue to ascend, with the exception of the US, where number of lung cancer deaths is expected to level off. This increase results from demographic changes, predominantly aging of populations.

In the countries where the tobacco smoking epidemic is on the rise, it is responsible for future increase of both lung cancer mortality rate and the absolute number of deaths. The observed, almost double increase of number of deaths in WPRO and SEAROs considers both sexes and results from the predicted particularly high increase of number of deaths in countries with biggest population size (China, Korea, India, and Indonesia). In African countries, but also in Arabian Peninsula, tobacco smoking becomes more and more popular among men, what is observed in Egypt or Saudi Arabia.

Almost all lung cancer cases are caused by tobacco smoking and therefore reducing prevalence of smoking worldwide should be a basic priority in fighting the disease. Understanding epidemiology of lung cancer and its causal risk factors can provide further arguments for its prevention. Tobacco as etiologic factor for lung cancer has been indisputably proven long time ago; ionizing radiation and exposure for some workplace carcinogens are responsible for about 15–20% of lung cancer cases (46).

According to the Lopez, Collishaw and Piha model (7) it takes about 40 years for the increase in smoking rates to be fully reflected in lung cancer epidemiology statistics. Therefore changes observed in smoking prevalence in particular regions of the world will influence lung cancer picture in different ways. This increase is caused by two factors that can enhance each other: tobacco smoking prevalence (phases of the tobacco epidemic) and population ageing. The increase of percentage of older people in the population is observed in all regions of the world. In 1969–1999 the biggest increase of life expectancy was observed in East Asia and Pacific Region (over 75%), Asia and Northern Africa (ca. 40%). In the OECD countries the life expectancy increase was less pronounced (12%) (47). In PAHO (77 years), EURO and WPRO (76 years) life expectancy is still 10 or more years higher than in Africa (58 years), SEARO and EMROs (68 years) (48).

Five-year lung cancer survival rates do not exceed 15%, even in the wealthiest countries, what brings out problem of lack of effective treatment for this cancer site. However, results of treatment in early stages of disease are significantly better [in lung cancer stage I or II 5-year survival reaches 70% (49)], what makes some clinicians consider introducing low-dose CT scans for screening of high risk groups of population. One of the recent studies from the US (National Lung Screening Trial study) has shown 20% reduction of lung cancer deaths when applying such approach (50).

Tobacco control is the most effective and the least expensive way to decrease number of lung cancer patients worldwide. Numerous initiatives related to lung cancer early detection has not been widely approved. Moreover, lung cancer secondary prevention cannot be considered as global strategy of controlling lung cancer, mostly due to unacceptably high costs. However, it is imaginable that countries with very high HDI might start implementation of lung cancer screening. One must remember that even then, no lung cancer screening participant can be left without being offered professional help in quitting smoking.