Patient reported outcomes (PRO) have become an important part of health outcomes research in adult cystic fibrosis (CF) (1). Their application is evidenced in many aspects of CF care including assessing new and established treatments and the cost-effectiveness of such interventions (2). Several specific tools have been developed for CF, the most validated contemporary instrument being the Cystic Fibrosis Questionnaire-Revised (CFQ-R) (3,4). The revised version has undergone rigorous psychometric testing and has been validated in numerous cross-sectional and longitudinal studies in CF (5-7). It has been widely applied to symptom comparisons between infectious lung pathogens, physical training programs, health resource utilization and treatment response in drug trials (8-12).

Chest CT has become widely accepted as a valuable imaging tool for the detection and monitoring of CF lung disease (13-15). Many centers obtain annual or biennial chest CT to monitor lung disease severity, but how chest CT abnormalities relate to how patients actually feel is currently unknown. Put another way, when a radiologist reports and grades abnormalities such as bronchiectasis or mucus plugging, how does that relate to how that patient with CF is actually feeling? A recent study examining this relationship found several significant associations between chest CT structural abnormalities and several CFQ-R domains (16). The purpose of our study was to further evaluate this relationship (I) specifically in an adult population with CF and (II) assess whether Inpatient versus Outpatient status influenced the findings. 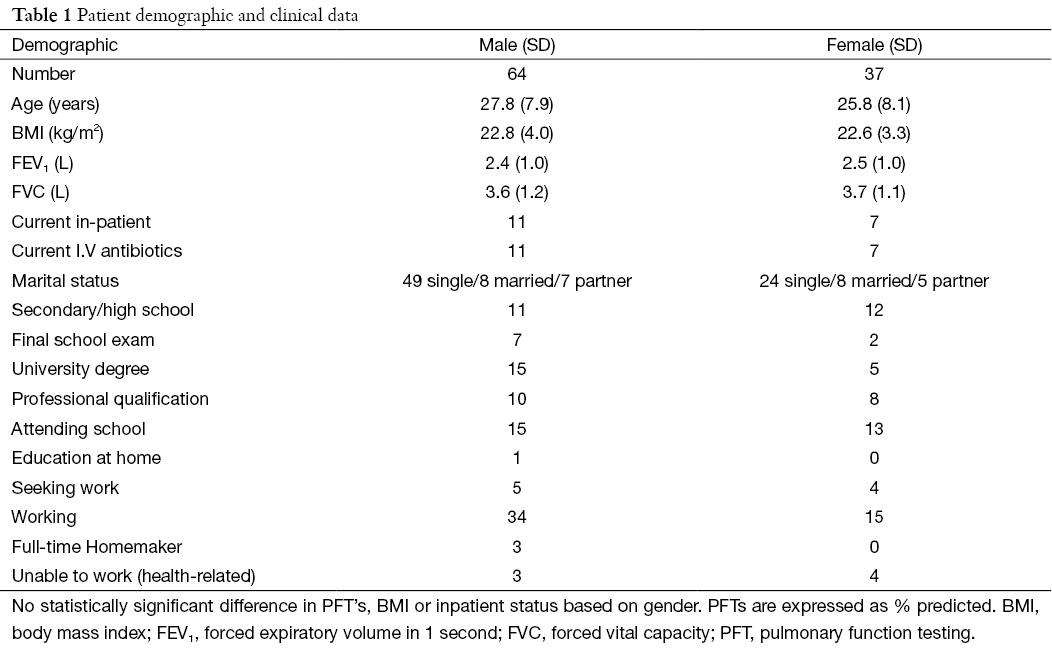 The CFQ-R is a disease-specific health-related quality of life questionnaire containing both generic and CF-specific scales and measures functioning during the previous 2 weeks (3,5). There are 12 domains including Physical Functioning, Emotional Functioning, Social Functioning, Body Image, Eating Problems, Treatment Burden, Respiratory Symptoms, Digestive Symptoms, Vitality, Health Perception, Weight and Role Functioning. Each CFQ-R scale yields standardized scores ranging from 0 to 100; higher scores indicate better QOL. The age-appropriate teen/adult version of the CFQ-R was used. The questionnaire has been previously been validated in several European CF populations (17-20). Patients were given the questionnaire when they attended for their CT, but were allowed to bring the questionnaire home if they wished and then send it back in.

Images were obtained using 64-slice CT (Sensation 64, Siemens, Erlangen, Germany) with patients in the supine position. Inspiratory images were obtained in suspended deep inspiration with 1mm slice thickness every 10 mm from the apices to the costophrenic angles. Expiratory images were obtained in full expiration at five levels: the top of the aortic arch, the carina, pulmonary veins, between level 3 and 5 and 2 cm above the diaphragm. Scanning parameters were 80–120 kVp and 50–120 mA with images reconstructed using a high spatial frequency bone algorithm and a 512×512 matrix. Lung windows with a width of 1,500 and level of −700 were applied.

Images were prospectively scored in random order by two chest radiologists (JD, AK) blinded to patient identification, clinical severity of disease, spirometry and questionnaire results. Images were scored using the modified Bhalla scoring system (21); which has been devised to evaluate the severity of CF in an objective manner. The Bhalla scoring system defines the severity of bronchial dilation and thickening relative to the adjacent pulmonary artery, and other parameters are scored according to the number of bronchopulmonary segments involved. This scoring system has been modified many times.

Abnormalities were defined according to recommendations of the nomenclature committee of the Fleischner society (22). Total CT score was derived by adding the scores for each abnormality, and ranged from 0–37. Absolute total scores were converted to percentages of the potential total maximum score.

Pulmonary function testing (PFT) (Vivaysis/Jaeger Masterscope System, Würzburg, Germany) was performed within 3 weeks before or after HRCT with the majority (78 of 101 scans, 77%) being performed on the same day. Measurements were obtained using described techniques, and predicted normal values were used to calculate percentage predicted values (23). Spirometry was expressed as percent predicted.

Patient demographics are provided as the mean ± standard deviation. Higher CT scores indicate worsening appearances whilst higher CFQ-R scores indicate better quality of life. Analysis was performed for inpatients and outpatients separately as well as for the entire group. Comparisons between groups were performed using the independent t-test. Multiple linear regression analysis was performed for each of the 12 CFQ-R domains as dependent variables and all clinical, spirometric and chest CT abnormalities as independent variables. Chest CT abnormalities in less than 5 patients were excluded from the analysis. All statistical analyses were performed with SPSS PASW Statistics 18 (SPSS Inc., Chicago, IL, USA). P values less than 0.05 were considered to indicate a significant difference.

Eighteen patients were current inpatients at the time of the questionnaire and all were receiving intravenous antibiotics for pulmonary exacerbations. They also had a higher number of admissions in the last 12 months compared to outpatients (P<0.0001). There was no significant difference in prevalence of intravenous therapy between inpatients and outpatients or in atypical colonizing organisms such as Mycobacterium Avium intracellulare, Aspergillosis or Burkholderia Cepacia. Inpatients had significantly worse FEV1 (1.8 vs. 2.5, P<0.001) and BMI (21.5 vs. 23.5, P<0.001) compared to the outpatients group. 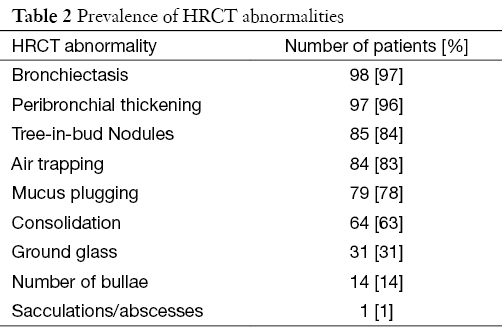 There was a wide spectrum of education within the cohort, with nine patients completing secondary school exams and 20% obtaining a college degree. Fifty percent of patients were actively working at the time of the study. For inpatients, Weight and Vitality scored the lowest whereas for outpatients, Vitality and Treatment Burden scored the lowest (Table 3). Significantly better scores were found in outpatients compared to inpatients for all domains (P<0.001 for all domains). 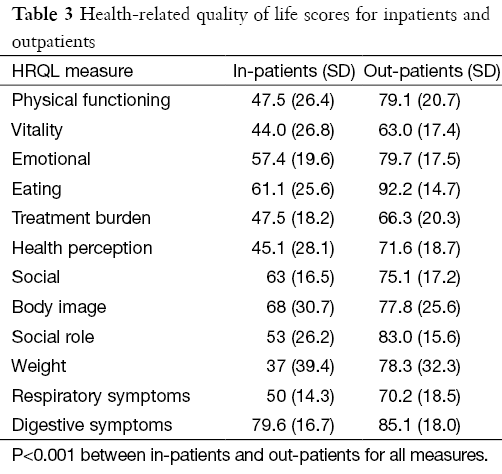 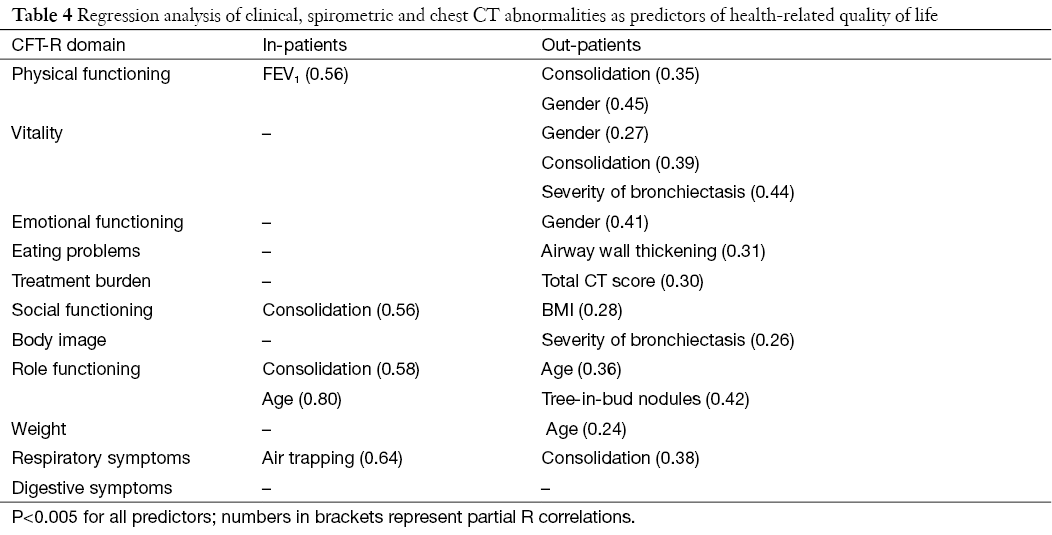 The major findings from our study are that in a specifically adult CF population, chest CT abnormalities (I) are independently associated with the CFQ-R, (II) show stronger associations than traditional parameters such as FEV1 and BMI and (III) are associated with several CFQ-R domains besides respiratory symptoms. Inpatient vs. outpatient status appeared to significantly affect the findings, although we acknowledge the smaller proportion of inpatients in this study. In our original hypothesis we predicted chest CT abnormalities would correlate most strongly with the Respiratory Symptoms domain. In fact, only two CT abnormalities (air trapping and consolidation) were independent predictors of this domain. Importantly, clinical and spirometric variables were excluded from our regression model when chest CT abnormalities were included. Such findings highlight two points, firstly the importance of even small subsegmental areas of consolidation in influencing Respiratory Symptoms, and secondly the importance of including expiratory chest CT sequences in routine CF imaging protocols to evaluate for air trapping. How consolidation and air trapping might contribute to respiratory symptoms is of utmost importance. In other disorders such as chronic obstructive pulmonary disease (COPD) and asthma, air trapping has been shown to impair ventilator mechanics, increase airway resistance and increase elastic load, all factors known to have detrimental effects on normal respiratory physiology (24-27). The significance of pneumonia is well known to result in a decrease in normal gas exchange and to stimulate pulmonary receptors and C-fibers, two major mechanisms contributing to respiratory symptoms (28,29).

Similar findings to our own were found in a recent study by Tepper et al. who assessed the relationship between chest CT abnormalities and QOL in CF (16). They also found air trapping and opacities to correlate significantly with Respiratory Symptoms. In contrast, they found on univariate analysis that both mucus plugging and airway wall thickening were associated with Respiratory Symptoms. The older age of our adult CF patient group is likely to explain the difference in results, since older patients are more prone to pulmonary infections (30). It may also be due in part to different CT scoring systems, as our study utilized the modified Bhalla score whereas the study by Tepper et al. utilized the Brody scoring system. It is worth emphasizing that the most important associations in both analyses for many CFQ-R domains were generally acute inflammatory abnormalities such as consolidation, sacculations/abscesses, tree-in-bud nodules and airway wall thickening. Such abnormalities are typically the most reversible (31), and since questionnaire responses may also show changes in response to treatment (7), it is intuitive that reversible CT abnormalities are also the ones most closely associated with health related QOL measures.

A somewhat unexpected finding was the association between chest CT abnormalities and domains other than Respiratory Symptoms, such as Physical Functioning, Vitality and Treatment Burden. The mechanisms influencing how CF lung disease might impact these non-respiratory QOL aspects are not strongly elucidated in CF. In other pulmonary disorders such as COPD, pulmonary exacerbations have been shown to influence many non-respiratory QOL aspects, for example physical activity and treatment burden (32). The perception of fatigue has also been shown to be strongly influenced by respiratory disease in COPD (33,34). Breslin et al. (34) have shown associations between deteriorating lung function and both fatigue and physical activity in COPD. It may be that, similar to COPD, in CF deteriorating respiratory disease results in physical deconditioning which in turn results in deterioration in many aspects of QOL. It is also known that lung disease effects the prevalence and severity of depression in CF (35), which in turn affects aspects such as social and role functioning. It is clear that the non-respiratory domains of the CFT-R are highly complex with multifactorial etiologies, and although our study was not designed to elucidate these, we suggest it corroborates previous work showing that the systemic sequelae of chronic respiratory inflammation may be more pervasive than confined to the respiratory system alone.

Several limitations to the current study should be noted. This study was not designed to evaluate prognosis, but rather to assess whether chest CT abnormalities are associated with how CF patients are feeling. We included teen/adults in our cohort, and our results should be interpreted carefully when extending the findings to a pediatric population. It was not our purpose to validate the CFQ-R, such validations have been previously performed by others (3,4,6).

In conclusion, chest CT abnormalities are significantly associated on multiple regression analysis with many aspects of QOL in CF, independent of clinical and spirometric parameters. Consolidation and air trapping are most strongly associated with Respiratory Symptoms. Our findings provide support for the inclusion of chest CT in QOL studies in CF.