We first gather large-scale data on the height dependence of adult cancer risks at various cancer sites, regardless of countries of origin. In this study, the height dependence is represented by the relative risk (RR) per 10 cm increase in height, denoted as RR10cm, for cancer incidence at a given cancer site. The five sets of cancer data used in this study include set (I) the Million Women Study in the United Kingdom (1), set (II) Norwegian men and women (2-12), set (III) Korean men and women (13), set (IV) postmenopausal women in the United States (14), and set (V) Canadian women (15). Each set of these selected data has more than 5,000 total cancer incidences and either provides RR10cm values or contains enough information for us to estimate RR10cm values for specific cancer sites. These cancer incidence data cover 16 cancer sites of women and 13 cancer sites of men. Some data (1,14,15) include both non-Hodgkin lymphoma and multiple myeloma, and we include both of them under “Lymphoma”.

We take the cancer risk data that have been adjusted for variables such as age and body mass index (BMI) whenever available. For the data set on Korean men and women (13), we take the “reproductive factor adjusted” data when available and take the “fully adjusted” data otherwise. For the data sets on postmenopausal women in the US (14) and on Canadian women (15), we take the “HR3” data that are multivariable-adjusted including BMI. When data is reported as the RR per 5 cm increase (13) or 15 cm increase (2) in height, we convert the reported RR and confidence interval (CI) into those per 10 cm increase in height by assuming that the logarithm of RR is proportional to height (1). For example, we convert the RR and 95% CI per 5 cm increase in height to those per 10 cm increase using the following relations:

where ΔCI represents the width of the CI. As an example, the RR value of 1.18 for breast cancer per 5 cm increase with 95% CI 1.11–1.25 (13) is converted to RR10cm of 1.39 with the 95% CI 1.23–1.56. Also, using the breast cancer data of Norwegian women [(2), Table IV], we first obtain the average RR per 15 cm increase in height (1.39 with the 95% CI 1.30–1.47) by averaging over the RR values of different age groups using the number of cancer cases as the weight, and then we convert it into RR10cm of 1.24 with the 95% CI 1.19–1.30. Some Norwegian data (4-6,8,9) do not provide RR values for a given increase in height; instead they provide the RR values of different height groups relative to a referent height group. In those cases we estimate the RR10cm values. We first assume that the height distributions of Norwegian men and women in the surveys follow the normal distribution with the mean height of 176 and 163 cm, respectively. The standard deviation in height is taken as 6.8 and 6.0 cm respectively for Norwegian men and women in the data, assuming that the ratios of the standard deviation over the mean height are the same as those for Dutch young adults at 21 years of age (22), which is expected if the height distribution has the same shape despite having a different mean value. We then calculate the mean heights of different height groups and estimate the RR10cm value and its CI. Note that all error bars shown in the figures represent the 95% CI of RR10cm. When the original data provide the 99% CI (1), we multiply the 99% CI width by a factor of 0.76 to obtain the 95% CI.

according to our hypothesis. These individual fit values of exponent α are listed in Table 1, where N/A means that the organ is not applicable to the gender. 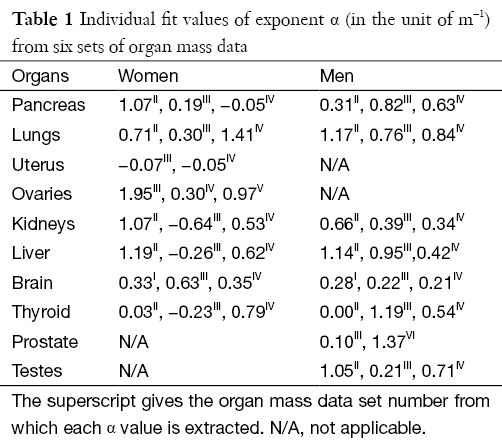 Cross symbols in Figure 1A show the 66 individual cancer risk data points on RR10cm with 95% CIs for 16 cancer sites of women. For a given site or organ, the RR10cm value from each set of the cancer risk data is shown with a different horizontal offset from the center position for that organ, which is represented by the tick mark on the horizontal axis above the organ name. Several sites including colon, breasts, uterus, ovaries, and lymphoma each contain all five sets of the cancer risk data; each of these sites shows data at five equally-spaced horizontal positions around the center position of the site, where the left-most data point corresponds to cancer data set I (1) while the right-most data point corresponds to cancer data set V (15). Note that the lung cancer data from two data sets (14,15) are shown separately for never-smokers and ever-smokers, and the breast cancer data from one data set (15) are shown separately for premenopausal and postmenopausal women. In addition, data for cervix uteri and corpus uteri are shown separately for each of the three sets of uterus data (13-15), and data for non-Hodgkin lymphoma and multiple myeloma are shown separately for each of the three data sets (1,14,15). We see that most sites have cancer risk data from multiple data sets, and the multiple data points for the same cancer site are consistent with each other in that their 95% CIs all have overlap with each other (except for a couple of data points for breasts, uterus and thyroid). 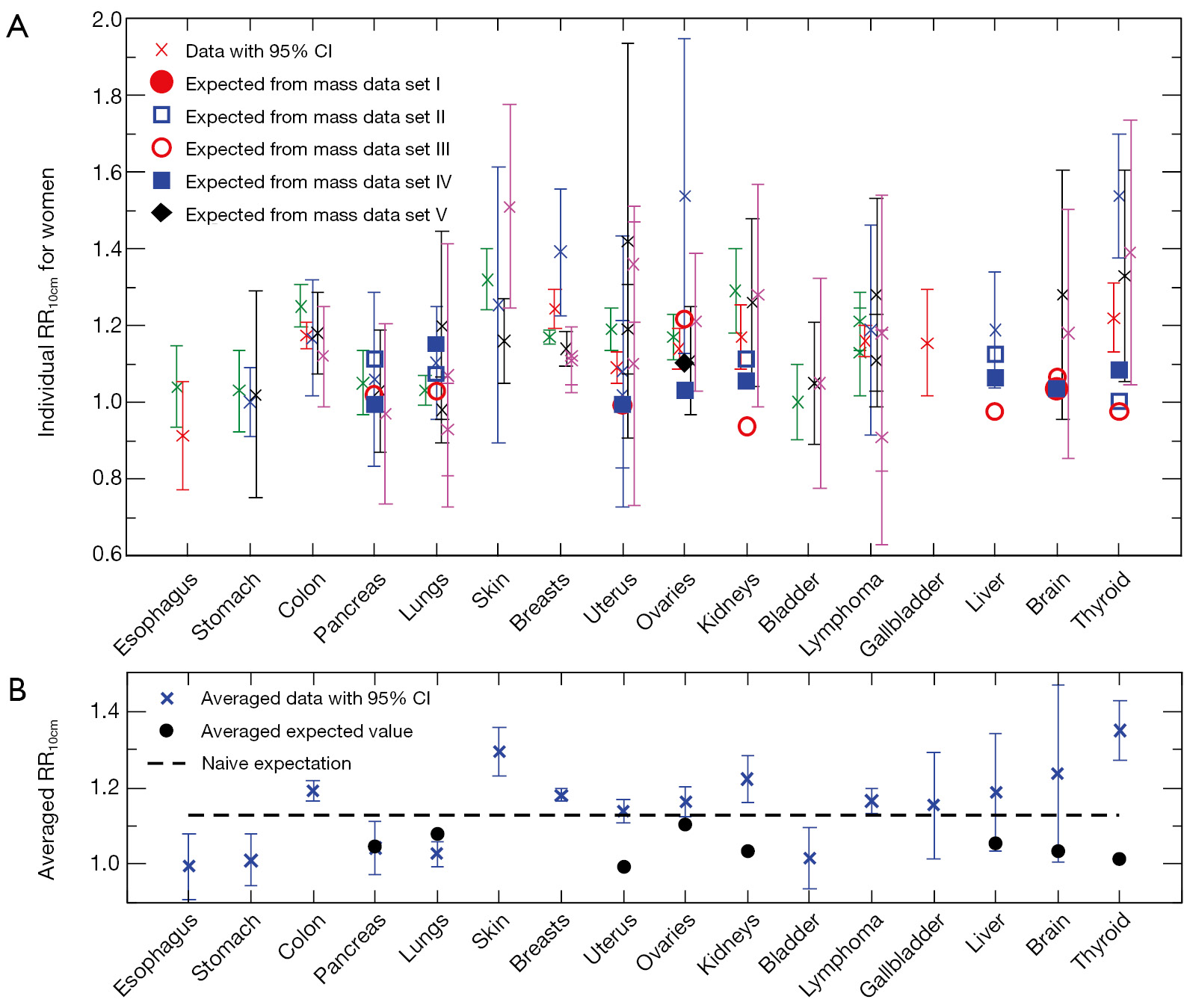 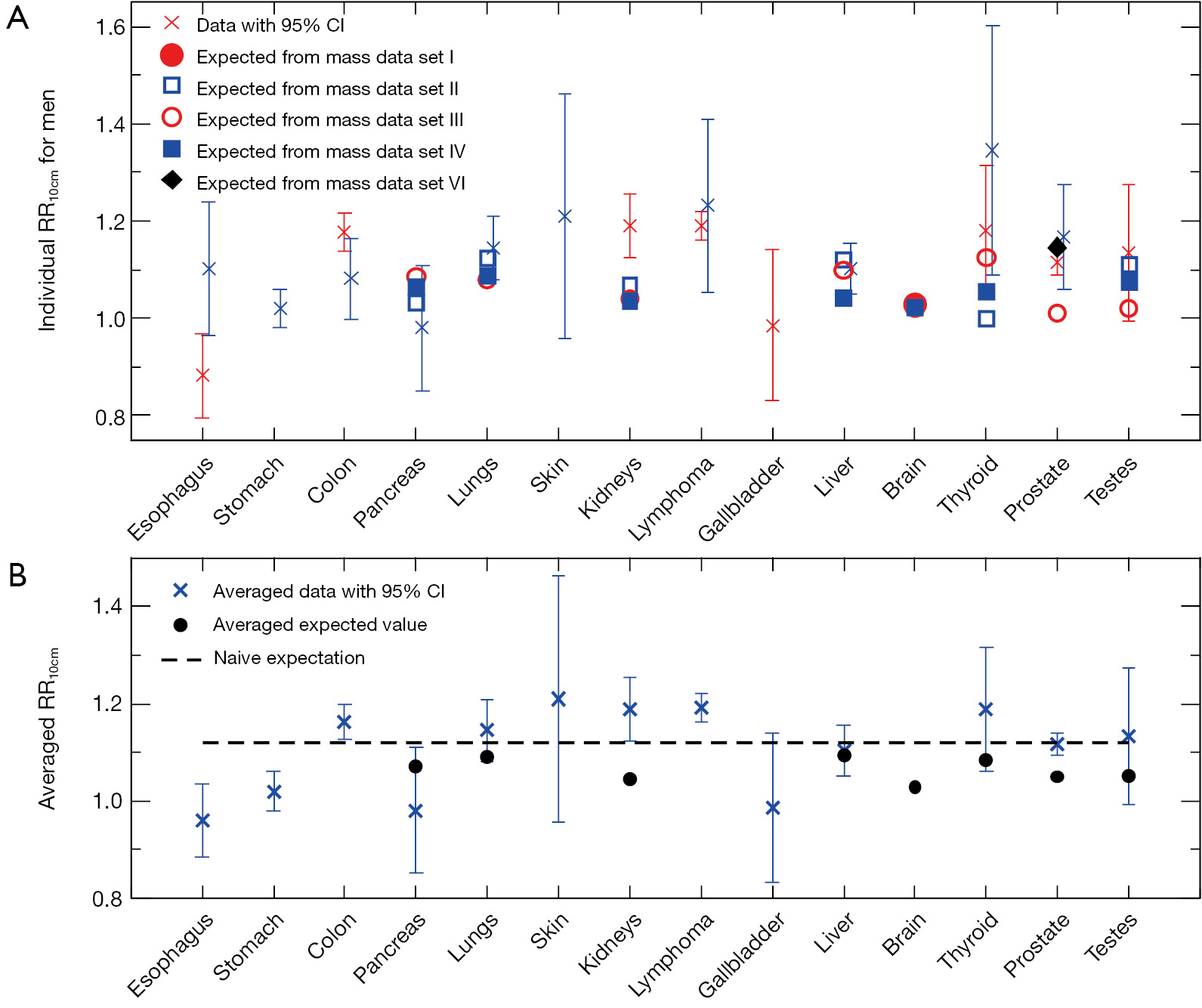 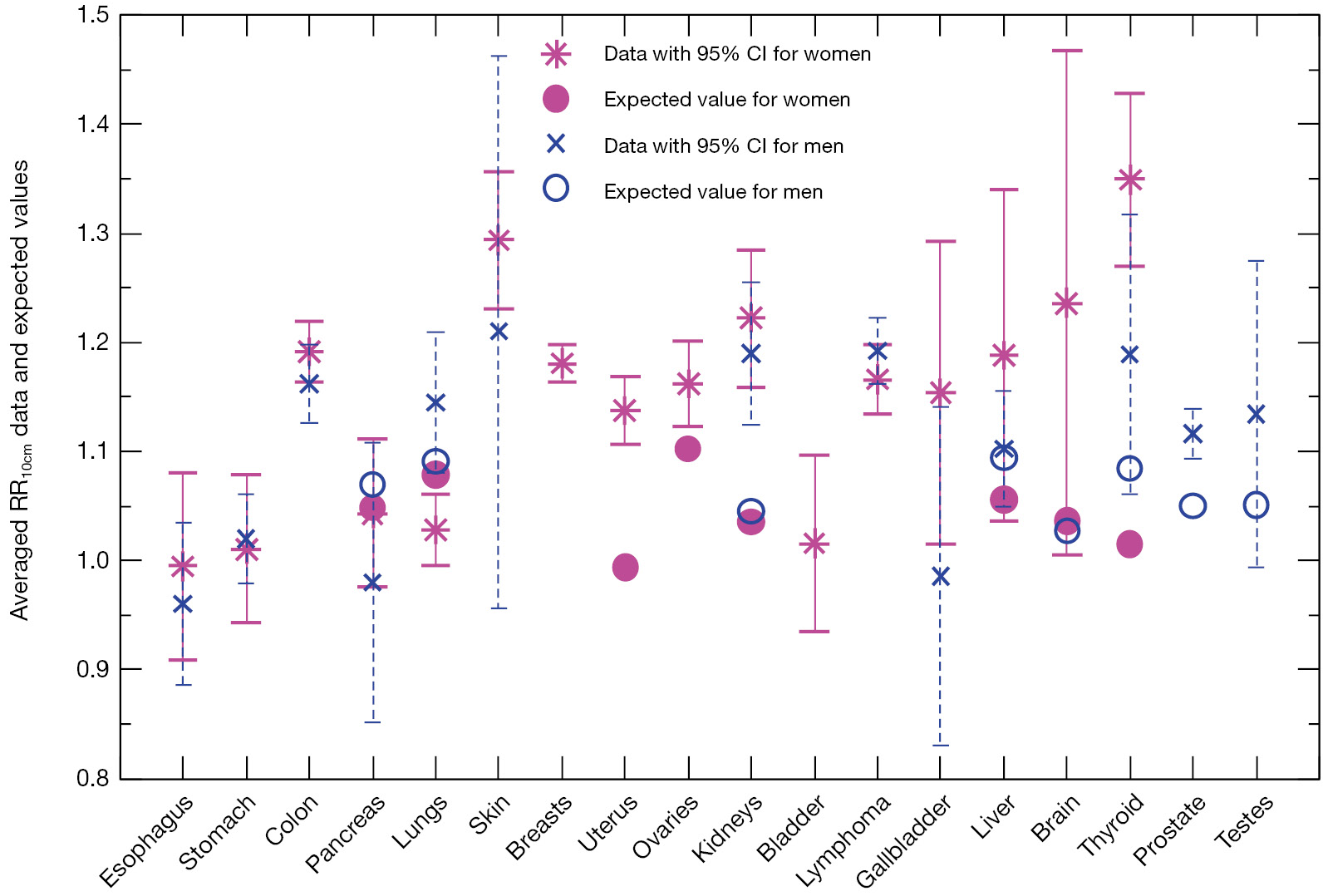 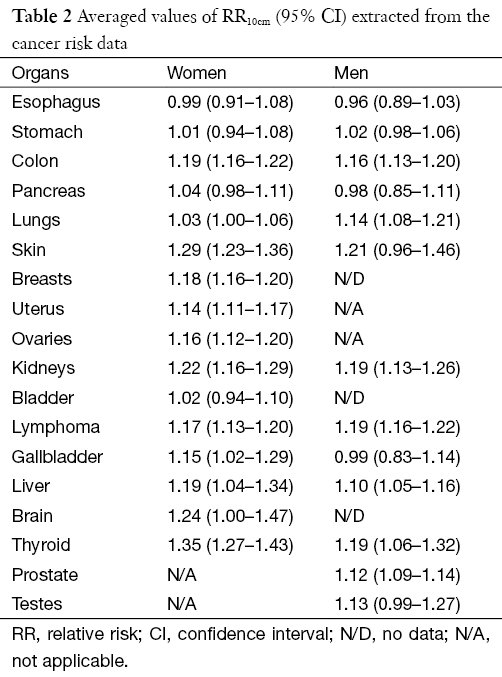 Figure 4 shows recent data on the male/female cancer risk ratio [2007-2011] (32) from the Surveillance, Epidemiology, and End Results (SEER) registry of the US National Cancer Institute. Since the SEER data cover the US population, we use organ mass data set I from Switzerland (23) and set II for the Caucasian population (24,25) for comparisons. Only shared sites with these organ mass data are shown, including lungs and bronchus (labeled as “Lungs*” in Figure 4), kidney and renal pelvis (“Kidneys*”), and liver and intrahepatic bile duct (“Liver*”). Since we take the mean height of 177 and 163 cm respectively for US men and women, but the mean height for organ mass data set II (24) is 172 and 161 cm respectively for men and women, we use ΔhM=5 cm and ΔhF=2 cm in the Eq. [3]. The brain mass data from set I does not provide average heights; therefore no height adjustment is made. Note that there are two expected values for lungs (and for kidneys) since we use the left and right organ mass separately to extract the height dependences. 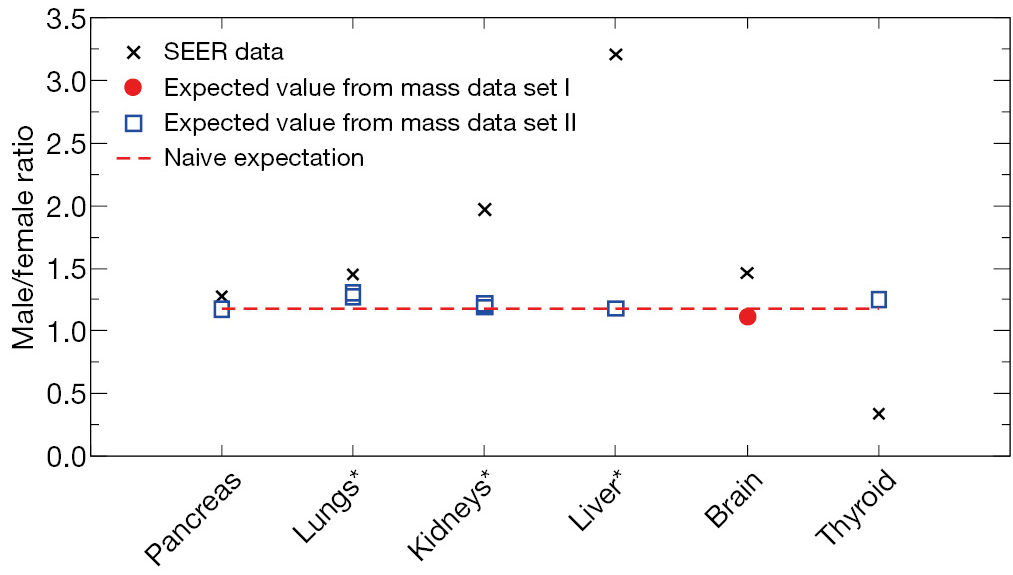 Figure 4 Age-adjusted SEER data (cross symbols) on the male/female cancer risk ratio [2007-2011] in comparison with the expected values (circles and squares) based on the organ mass difference between men and women; the dashed line represents the naive expectation.

This study investigates the height dependence of cancer risks that is expected from the hypothesis that cancer risk is proportional to the organ mass, i.e. organ mass is a multiplicative factor in calculating the cancer risk. Other factors such as cell proliferation, nutrition and genetic factors may affect both height and cancers risks, therefore they may also contribute to the height dependence of cancer risks. Furthermore, the cancer risk data and the organ mass data used in this study come from multiple countries including those in Asia, Europe and North America. However, there could be differences among populations of different countries (35), and similar analysis as this study can be performed when there are sufficient country-specific data.

The author is grateful to Dr. Anders Engeland (Norwegian Institute of Public Health and University of Bergen, Norway) for correspondence about the Norwegian cancer risk data.