The iPad/iPhone 3D photography app—a promising device, but how about its accuracy?

This study assessed the validity and reproducibility of a novel imaging system by comparing 21 anthropometric parameters measured using calipers (direct measurement) and three-dimensional photographs (3D photogrammetry). Furthermore, the 3D virtual model obtained by the new imaging system was compared and analyzed with the 3D virtual model obtained by the VECTRA H1 camera using a heat map. The authors found most anthropometric parameters did not show statistically significant differences between their novel iPad/iPhone 3D photography app and calipers (direct measurement). At the same time, intra- and interobserver reliability were high indicating good accuracy and reproducibility of the new device. The new application validated by the authors in this article provides excellent convenience for patients capturing 3D images of themselves. Although this is a very well-designed study, some issues have to be discussed. In addition, we would like to suggest future research directions in this very important research field. 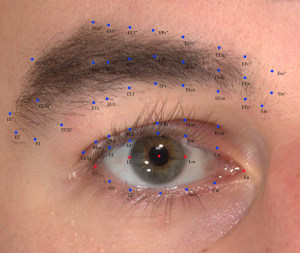 Secondly, the authors compared the new 3D imaging device with the portable VECTRA H1 camera (1). However, a new generation of portable devices is now available, the VECTRA H2. A recent study (6) showed that most periocular measurements taken with the VECTRA H2 were slightly less reliable than those taken with the VECTRA M3 device. Accuracy differences between the static M3 system and the portable H2 device can be reduced by taking the average of two photographic measurements with the portable system. Therefore, in addition to comparing the new 3D photographic system with the current gold standard—a static 3D device—comparative analyses with a new generation of portable devices (i.e., VECTRA H2) should be attempted in future studies.

Thirdly, the anthropometric landmarks in this study involved the entire facial region, including the periorbital, the nasal, and the orolabial region (1). Except for some landmarks in the periorbital and nasal regions, most landmarks did not differ significantly between iPad/iPhone 3D photography app and calipers used in this study. Nevertheless, landmarks in the face and especially in the periocular region are still relatively too few and not specific enough. In ophthalmology and oculoplastic surgery, for example, a more detailed periocular landmark protocol is required to analyze the morphology of the periocular region. Therefore, for full validation of the iPad/iPhone 3D photography app in the periocular region, further studies using the detailed landmark system developed by Guo et al. (7) are necessary. That will probably be similar in other facial regions.

In summary, the authors introduce a novel 3D facial scanning system allowing patients to autonomously take 3D images of themselves. This scanning device seems to have comparable accuracy to direct measurements and may significantly increase the database of patient images before and after maxillofacial surgical procedures. However, for a full validation, further comparative studies using more detailed landmark protocols are necessary. With this letter, we hope that the proposed suggestions will make this assessment system more accurate, reliable, and widely used in various medical areas.

Funding: This work was supported by State Scholarship Fund from the China Scholarship Council (No. 202008080258 to WF).

Provenance and Peer Review: This article was a standard submission to the journal. The article did not undergo external peer review.

Conflicts of Interest: All authors have completed the ICMJE uniform disclosure form (available at https://atm.amegroups.com/article/view/10.21037/atm-22-1021/coif). The authors have no conflicts of interest to declare.