Colorectal cancer (CRC) is the third most common malignancy in both males and females in the US (1). CRC is also the second leading cause of cancer-related deaths worldwide (2). The incidence of CRC in China is also increasing (3). Rectal cancer accounts about 60–70% of all CRC. Although various therapeutic strategies have been developed during the last decades, surgery is still the most effective procedure to treat CRC. Some classical surgery types and principles have been proposed, including complete mesocolic excision (CME) for colon cancer and total mesorectal excision (TME) for rectal cancer.

Quantitative data were summarized as mean ± standard deviation (SD). Statistical analysis was performed with R statistical software (R 4.1.1, R Foundation for Statistical Computing, Vienna, Austria). ANOVA test and Student’s t test were used to compare continuous data and the Dunn test was used for multiple comparison. Chi-square test or Fisher’s exact test was used to analyze categorical data. The Shapiro–Wilk test were used to test the normality of the data. “Survminer” and “Survival” packages in R were used to perform survival analysis. A two-sided P value of <0.05 was considered statistically significant. Shapiro-Wilk test was used to test the normality of continuous data.

Short-term and long-term outcomes and complications were further analyzed among different groups. As shown in Table 2, there was no difference in the operation time for the four groups. Bleeding in the NOSES groups was significantly less than the non-NOSES group, while the EVER, EXER, and IREX groups had similar blood loss (Figure 1). The EXER and IREX groups showed less time to first post-operative flatus than the non-NOSES group, while no difference was observed among NOSES groups (Table 2; Figure 2). The same lymph nodes were harvested for all four groups. There was no difference in the post-operative stay, anastomosis bleeding, intestinal obstruction, unplanned reoperation, anal dysfunction, or deep vein thrombosis among all cases. The tumor diameter was similar among the three NOSES groups. However, more protective ileostomies were performed for the non-NOSES group. 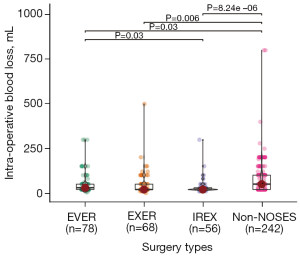 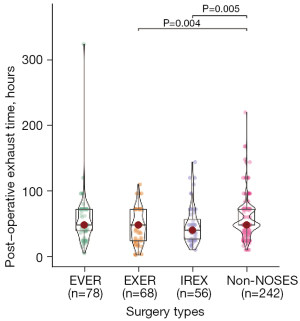 DFS and OS analyses were also conducted to assess the oncologic outcome of NOSES. As shown in Figure 3 and Figure 4, neither DFS nor OS showed differences among the three NOSES groups or among all four groups. Survival analysis was also performed in different AJCC stages, and no difference was observed in all groups (Figures 5,6). 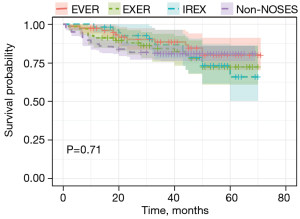 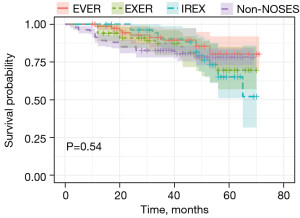 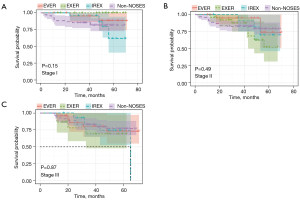 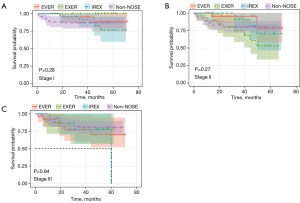 NOSES to treat CRC has been widely accepted since it was systematically proposed in 2013, especially during the past 10 years. Research has shown that NOSES have various advantages. Without abdominal incision, pain will be reduced, and enhanced recovery will be achieved. NOSES also brings cosmetic and psychological benefits to CRC patients. Rectal cancer accounts for 40–60% of all CRC, and evaluation is essential to compare the short-term and long-term outcomes of NOSES for rectal cancer with traditional laparoscopic surgeries or within NOSES groups. Our results showed that there were no differences between NOSE and traditional laparoscopic surgeries. Result also showed there were no differences among different types of NOSES in rectal cancer.

Interestingly, NOSES were found to be have less blood loss than traditional non-NOSES group. This might be associated with the smaller BMI and earlier T staging of patients in the NOSES groups. Previous studies showed that operative bleeding was significantly increased when comparing normal-weight patients to overweight patients (9,10). Advanced T stage is significantly related to larger tumor size (11), and patients with large sized tumors have more blood loss in CRC surgery (12). Data also correlated blood loss with short-term and long-term outcomes of CRC. The amount of intraoperative blood loss was associated with significant differences in the OS and DFS of patients with stage II/III CRC who received curative resection (13). Another study also found that the degree of blood loss during surgery for colon cancer was a factor that influences long-term survival (14). Furthermore, blood loss during surgery increased the risk of subsequent surgery for small bowel obstruction (15). However, more studies are needed to compare the intraoperative blood loss between NOSE and non-NOSE surgeries in CRC and for various T stages and tumor sizes.

There was no difference in the operation time between the NOSES group and the non-NOSE group, which is inconsistent with other studies (16,17). We speculate that the difference was mainly due to the proficiency of these surgeries. NOSES have been proposed and widely applied since 2013, and the surgeons in our center quickly attained maximal performance in the execution of NOSES. Our results indicate that NOSES are replicable and feasible. There was a difference in the age distribution between the NOSES and non-NOSES groups.

We also found a shorter post-operative gas exhaust time in NOSE compared with non-NOSE surgeries, which is consistent with previous studies (17,18). This result further confirmed the advantages of NOSES to significantly shorten the postoperative gas exhaust time without increasing other complications. This observation was closely associated with post-operative pain. Research has shown that NOSES reduce patients’ postoperative pain by avoiding an abdominal extraction site (19,20). This relief of postoperative pain therefore contributed to the rapid rehabilitation of patients, including a shortened post-operative gas exhaust time (21). Further, more diverting ileostomies were created in non-NOSE rectal cancer surgeries when compared with NOSE surgeries, while there was no difference between the anastomosis leakage. This data indicated that ileostomy might have a limited role in decreasing the anastomosis leakage. However, more detailed studies are needed to further verify this conclusion.

There was no difference in the long-term prognosis between NOSES and non-NOSES groups. The 5-year OS and DFS showed that patients receiving NOSES had a comparable prognosis with those receiving non-NOSES. This result demonstrates that NOSES in rectal cancer are oncologically safe.

This study has some limitations. First, it is a retrospective study. Some key statistics cannot be recorded and analyzed, and significant biases may affect the selection of controls. Some prospective studies are ongoing, and more reliable data will be reported. Second, the number of included cases is small, which makes it difficult to determine if a particular outcome is a true finding. Third, we only included patients who received rectal cancer resection, and it is unknown if the conclusion applies to colon cancer.

In conclusion, our study examined the short-term and long-term outcome of NOSES in rectal cancer and demonstrated that NOSES, at least in rectal cancer, are safe and feasible treatment options. These results warrant further study, and NOSES should be implemented in the treatment of CRC.

Funding: This research was funded by Zhejiang Province Medical Health Science and Technology Project (Grant No.2022498823).

Reporting Checklist: The authors have completed the STROBE reporting checklist. Available at https://atm.amegroups.com/article/view/10.21037/atm-22-1175/rc

Conflicts of Interest: All authors have completed the ICMJE uniform disclosure form (available at https://atm.amegroups.com/article/view/10.21037/atm-22-1175/coif). The authors have no conflicts of interest to declare.

Ethical Statement: The authors are accountable for all aspects of the work in ensuring that questions related to the accuracy or integrity of any part of the work are appropriately investigated and resolved. The study was conducted in accordance with the Declaration of Helsinki (as revised in 2013). The study was approved by ethics board of the Second Affiliated Hospital of Harbin Medical University (No. GZRYS-125) and informed consent was taken from all the patients.