With 878,348 new cases and 444,347 deaths in 2020 (1), head and neck squamous cell carcinoma (HNSC) is the 7th most common type of cancer in the world (2). Surgery, radiotherapy, chemotherapy, and immunotherapy are the main treatment methods for HNSC (3-5). More than 50% of HNSC patients develop local recurrence or metastasis in 3 years (6), and previous studies have shown that phosphatidylinositol-4,5-bisphosphate 3-kinase catalytic subunit alpha (PIK3CA), tumor protein 53 (TP53), cyclin dependent kinase inhibitor 2A (CDKN2A), and other genes play an important role in the occurrence and development of HNSC (7,8). In vitro experiments in HNSC patients with PIK3CA mutations showed that PIK3CA inhibitors exhibited antitumor effects and slowed tumor cell proliferation (9). Inhibition of PIK3CA can increase the radiosensitivity of head and neck squamous cell carcinoma, hinder the DNA repair of tumor cells and improve the prognosis of HNSC patients (10). Compared with TP53 wild-type HNSC patients, tumor cells in TP53 mutant HNSC patients showed stronger invasiveness and metastasis (11). TP53 wild-type tumor cells maintain metabolic diversity, including mitochondrial respiration and glycolysis, while TP53 mutant tumor cells show glycolysis dependence, which affects the sensitivity of tumor cells to radiotherapy and thus affects patient prognosis (12). Therefore, exploring the molecular mechanism of HNSC plays a crucial role in improving the prognosis of patients. In recent years, microarray technology and bioinformatic analyses have been widely used to find gene alterations at the genome level to help identify the differentially expressed genes (DEGs) and functional pathways involved in the HNSC process. In this study, data obtained from The Cancer Genome Atlas (TCGA) underwent analyses, including a differential expression analysis and a univariate survival analysis, combined with a protein-protein interaction (PPI) analysis, Gene Ontology (GO)/Kyoto Encyclopedia of Genes and Genomes (KEGG) functional enrichment analysis, clinical correlation analysis, and Gene Set Enrichment Analysis (GSEA) analysis, to explore the underlying molecular mechanisms of HNSC. We present the following article in accordance with the REMARK reporting checklist (available at https://atm.amegroups.com/article/view/10.21037/atm-22-1143/rc).

The clinical and transcriptome data of the HNSC patients were acquired from TCGA (https://portal.gdc.cancer.gov/). The transcriptome data were converted to gene symbols according to Genome Reference Consortium Human Build 38 patch release 13 (GRCh38.p13, National Center for Biotechnology Information-NCBI: GCA_000001405.28). The messenger ribonucleic acid (mRNA) data were extracted, and the expression level of mRNA was measured. If there were multiple groups of mRNA data in the same specimen, the average value was used. The survival status and survival time of the patients were extracted from TCGA clinical data file, and a single-factor Cox regression analysis was performed according to the survival status and mRNA expression of each sample to generate a survival-related gene set. According to the transcriptome data, the samples were divided into a normal tissue group and a tumor tissue group, and the gene sets with differential expression in the normal tissues and tumor tissues were identified.

The intersection gene set was obtained from the survival-related gene set and the DEGs set, and the intersection gene set was imported into STRING (Protein-Protein Interaction Networks Functional Enrichment Analysis, version 11.5) (13) for the PPI analysis, and the analysis results were then imported into Cytoscape (version 3.9.0) (14) for the subsequent analysis. We used Cytoscape’s following plug-in applications: Mcode (version 1.5.1) (15) for the module analysis, Cytohubba (version 2.5.8) (16) for gene scoring, and ClueGO (17) for the gene function enrichment and pathway analysis. Based on the above analyses, CD247 molecule (CD247) was ultimately selected as the main target gene in this study.

The study was conducted in accordance with the Declaration of Helsinki (as revised in 2013). This study was retrospective in nature. TCGA clinical data and transcriptome data were extracted for the bioinformatic analysis. The endpoints of the study were the 5-year overall survival rate and the median survival time of the patients. The following clinical indicators were included in the analysis: age, gender, smoking history, alcohol history, tumor clinical stage, tumor pathological stage, and lymph node-related events. The transcriptome gene indicator examined in the analysis was CD247.

We downloaded the TCGA transcriptome expression data, and through a differential expression analysis, the cutoff value was defined as a log fold change (FC) with an absolute value >1, and a P value <0.05. The distribution trend of the included genes is shown in Figure 1, and a total of 4,289 DEGs were counted. TCGA clinical data and transcriptome data were extracted, a univariate Cox regression analysis was performed, and a total of 2,786 survival-related genes were identified. Using the Venn diagram (https://bioinformatics.psb.ugent.be/webtools/Venn/) to identify the intersection (see Figure 2), a total of 601 intersection genes were identified as the object of the subsequent analysis. 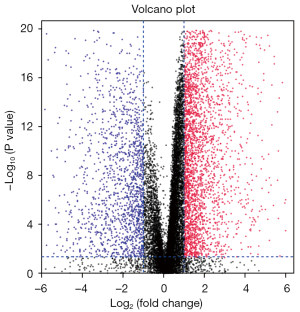 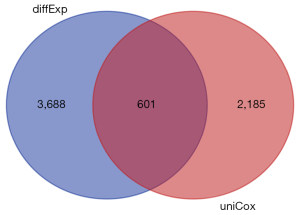 The identified intersection genes were imported into STRING for the PPI analysis, the parameter was set to medium confidence (0.400), and the analysis results were imported into Cytoscape for visualization. A module analysis was conducted via MCODE. Figure 3 shows an overview of Cytoscape. Figure 4 shows the module with the highest MCODE score (score =19.304) with a total of 24 hub genes. 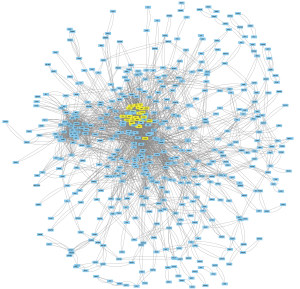 Figure 3 Cytoscape overview map. The 601 intersection genes were imported into the STRING website for analysis with medium confidence (0.400), and the obtained protein interaction analysis results were visualized in Cytoscape to obtain an overview map. The yellow area shown is the most important module analyzed by the plug-in MCODE. MCODE, Multi-Contrast Delayed Enhancement. 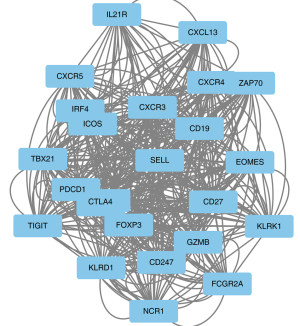 A functional enrichment analysis of the intersection genes was carried out, and the similar results of functional enrichment analysis were take only one result. The analysis results were visualized in a bubble diagram (see Figure 5). Notably, the main cellular components of the intersection genes were the endoplasmic reticulum lumen and the intrinsic component of the plasma membrane. The molecular functions were signaling receptor binding and oxidoreductase activity. The main biological processes included the cell surface receptor signaling pathway, leukocyte activation, cell motility, lymphocyte activation, and lymph node development. 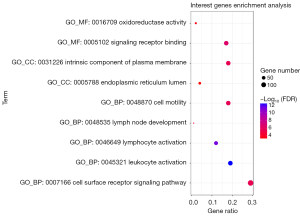 The results of the functional enrichment analysis of the hub genes by ClueGO are shown in Table 1. Notably, the hub genes act on multiple immune-related pathways, including the T-helper 17 (Th17) cell differentiation, natural killer cell mediated cytotoxicity, the T cell receptor signaling, the viral protein interaction with the cytokine and cytokine receptor, and the primary immunodeficiency pathways. Among them, CD247 was found to be involved in multiple pathways, which suggests that it may play an important role in immune regulation. To further assess the importance of CD247, the PPIs were scored using Cytohubba. Using the Maximal Clique Centrality (MCC) scoring method, the results showed that the CD247 interaction score was in the top 3%, which suggests that it plays an important role at the protein level. Thus, CD247 was selected as the main target gene in this study.

KEGG pathway enrichment analysis of DEGs in the most significant module

TCGA transcriptome data were extracted to draw a violin plot (see Figure 6). The violin plot suggested that CD247 was more highly expressed in tumor tissues than normal tissues, and there was a significant difference between the 2 groups. The median CD247 expression value for the normal group was 0.559, and that for the tumor group was 0.985. The independent samples t-test showed a P value <0.001, and a t value of 6.647. 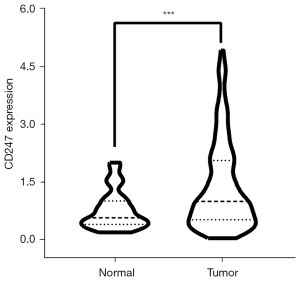 Figure 6 Violin diagram. The expression levels of CD247 in tumor tissues and normal tissues were extracted from the TCGA transcriptome data, and statistical analysis showed that P<0.001. The short line segment is the median, and the dotted line is the quartile. ***, P<0.001. Normal, normal tissues; Tumor, tumor tissues. 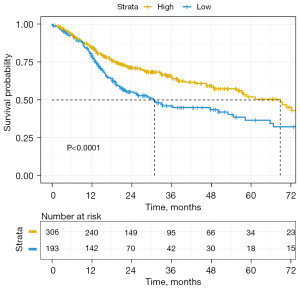 The results of the multivariate Cox regression analysis were plotted as a forest plot (see Figure 8), which showed that age, CD247, N, M, and new tumor events were independent risk factors in the prognosis of HNSC patients. Among them, CD247 was found to be a protective factor, and patients with high CD247 expression had a better prognosis than those with low CD247 expression. 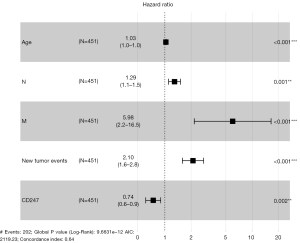 Figure 9 GSEA pathway analysis. The TCGA transcriptome data was imported into the GSEA analysis software, and it was concluded that the high expression of CD247 activates the pathways hsa04650 and hsa04660. KEGG, Kyoto Encyclopedia of Genes and Genomes. 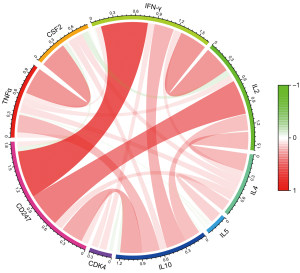 In previous studies, we found that IFN-γ, which is a type II interferon produced by immune cells, such as T cells and natural killer cells (18,19). In our study, it is a related indicator of the 2 pathways. IFN-γ activates effector immune cells and enhances antigen presentation. It plays an important role in antiviral and anti-tumor responses (18,19), and participates in the class I antigen presentation pathway by inducing the replacement of the catalytic proteasome subunit with the immunoproteasome subunit (18,19). IFN sensitization can improve the anti-tumor effect of chimeric antigen receptor T-cell immunotherapy (CAR-T) (20). Changes in leukocyte morphology and behavior caused by IL-2 lead to the initiation or continuation of immune responses (21), and mediate immune responses (22). IL-2 is involved in intercellular signal transduction and plays a role in activating natural killer cells (23). IL-2 can also transmit signals from the cell surface to trigger apoptosis (24,25), and is involved in processes that activate or increase the frequency, rate, or extent of interferon-gamma production (26). IL-10 plays a role in regulating leukocyte chemotaxis (27), and the transduction of IL-10 promotes the maintenance of the programmed cell death protein 1 (PD-1), T cell factor-1 (TCF-1), cytotoxic T lymphocyte (CD8 T) cell population, thereby maintaining anti-tumor immunity (28,29). In-vivo experiments have shown that the overexpression of IL-10 improves tumor immune monitoring ability and inhibits tumor growth (30). In clinical practice, polyethylene glycol IL-10 has been shown to result in immune activation and has anti-tumor effects in patients with advanced tumors (31).

In the clinical correlation analysis, the patients were divided into high- and low-expression groups based on the best cutoff value. The correlation analysis of TCGA clinical data revealed a positive correlation between CD247 expression and patient age (P=0.005). This phenomenon may be associated to multiple chronic inflammation in elderly patients (32,33). CD247 was negatively correlated with pT stage (P=0.011) and pathological nodal extracapsular spread (P=0.014). Based on these clinical indicators and the subsequent pathway analysis results, we speculate that CD247 promotes the expression of IFN-γ, IL-2, and IL-10 by activating hsa04650 and hsa04660, thereby improving the body’s tumor immune monitoring ability, inducing tumor cell apoptosis, and inhibiting tumor cell growth. This process clinically manifests as a reduction in the pT stage and a reduction in the occurrence of pathological nodal extracapsular spread, which in turn improve the prognosis of HNSC patients.

Through our research, it can be inferred that in HNSC patients, the high expression of CD247 increases the expression levels of IFN-γ, IL-2, and IL-10 in the nucleus by activating the hsa04650 and hsa04660 pathways, which in turn improves tumor immune monitoring, promotes tumor cell apoptosis and inhibits tumor cell growth. This process may reduce the pT stage of patients and reduce the occurrence of pathological nodal extracapsular spread events, thereby improving the prognosis of patients. Thus, CD247 may serve as a potential target for improving clinical treatments or improving prognosis.

Funding: The study was supported by Guangzhou Health Science and Technology Project (grant No. 20201A011101).

Reporting Checklist: The authors have completed the REMARK reporting checklist. Available at https://atm.amegroups.com/article/view/10.21037/atm-22-1143/rc

Conflicts of Interest: All authors have completed the ICMJE uniform disclosure form (available at https://atm.amegroups.com/article/view/10.21037/atm-22-1143/coif). The authors report that this study was supported by Guangzhou Health Science and Technology Project (grant No. 20201A011101). The authors have no other conflicts of interest to declare.