The diagnostic value of endoplasmic reticulum stress-related specific proteins GRP78 and CHOP in patients with sepsis: a diagnostic cohort study

Sepsis is defined as life-threatening organ dysfunction caused by the host’s defective response to infections (1). Sepsis is a serious complication of acute and critical clinical patients. It is often induced by infections, severe trauma, burns, major operations, and other factors, and can lead to septic shock and multiple organ failure. With the aging of the population, the incidence of sepsis is also rising, bringing great burden to the society. The key to the treatment of sepsis is early recognition and accurate assessment, followed by appropriate intervention. Although there have been advances in diagnosis and treatment, the incidence of sepsis is still escalating yearly. In 2015, the number of deaths related to sepsis in China was 1,025,997. Globally, the annual number of sepsis cases is as high as 31 million cases, with a mortality rate of 30% to 50%, and therefore, this represents a significant global medical problem (2,3). The European Society of Critical Care Medicine (ESICM) and the American Society of Critical Care Medicine (SCCM) jointly published the Guidelines for Sepsis 3.0 in 2016, which emphasized the importance of early diagnosis and evaluation of the disease. However, the existing observation and evaluation indexes are often inadequate. Although C-reactive protein (CRP), interleukin (IL)-6, procalcitonin (PCT), and lactic acid (LAC) play an important role in clinical applications, relevant reviews have shown that it is often difficult to achieve the balance between sensitivity and specificity. Despite PCT’s higher specificity for bacterial infection, its level can also be elevated in non-infected conditions (4,5). False-positive results could lead to a misdiagnosis with crucial consequences for the treatment. Patients might be exposed to adverse effects and resistance to antibiotics if antimicrobials are used inappropriately. Recently, a previous study has demonstrated that the protein levels of CHOP and GRP78, markers of endoplasmic reticulum stress (ERS) activation, increased rapidly and continuously in the serum of patients with sepsis (6), suggesting that these two proteins may play an important role in the occurrence and development of sepsis. It is reported the transcription factors CHOP and GRP78 induced by ERS could contribute to sepsis-induced apoptosis (7). Therefore, this study evaluated the role of GRP78 and CHOP in the diagnosis of septic patients by measuring the serum levels of these ERS-related specific proteins. We present the following article in accordance with the STARD reporting checklist (available at https://atm.amegroups.com/article/view/10.21037/atm-22-1445/rc).

A total of 52 patients with sepsis infection and 26 patients with non-sepsis infection, who were admitted to the Department of Intensive Care Unit of Shanghai East Hospital and the Department of Anaesthesia, Critical Care and Pain Medicine of Fudan university Shanghai Cancer Center from February 1, 2018 to September 30, 2018, were enrolled in this study. The study was conducted in accordance with the Declaration of Helsinki (as revised in 2013). This research project was approved by the Ethics Committee of Shanghai East Hospital and Shanghai Cancer Center, Fudan University, and was implemented with the informed consent of the patients.

Participants aged ≥18 years and <80 years were included. Patients admitted to our ICU during the study period who met the 2016 SCCM/ ESICM Sepsis 3.0 diagnostic criteria were allocated to the sepsis infected group. Patients were enrolled into the non-sepsis infected group if they satisfied the following inclusion criteria: (I) patients presented with symptoms of systemic inflammatory response syndrome (SIRS) and a clear infection site; (II) no new symptoms of dysfunction of any organ were present; and (III) patients did not meet the Sepsis 3.0 diagnostic criteria. The following exclusion criteria were applied: (I) patients in the terminal stages of malignant tumors; (II) patients with a clear diagnosis of acute coronary syndrome or patients with cerebral infarction; (III) patients with an expected survival time of less than 48 h. If patients in group II showed aggravation of infection during the course of disease and met the diagnosis of sepsis, they would be excluded from this group and transferred to group I.

The basic patient characteristics including age, gender, daily Sequential Organ Failure Assessment (SOFA) score and Acute Physiology and Chronic Health Evaluation II (APACHE II) score, disease characteristics and survival information, and baseline laboratory tests were collated. A total of 4 mL venous blood was collected on days 1, 2, 3, and 7 following admission to the ICU. The serum was centrifuged within 15 min and stored at −80 ℃ for GRP78 and CHOP concentration detection. The levels of GRP78 and CHOP in the serum supernatant were detected using ELISA kits (Human CHOP ELISA Kit, MLBio) according to the manufacturer’s instructions. Each specimen had two duplicate holes, and the mean value was taken. The experiment was repeated 6 times. Serum CRP, IL-6, PCT, and LAC levels were detected on the day of blood collection. Patients were shortly follow-up for the 28-day mortality.

Statistical analysis was performed using SPSS 19.0 software and independent sample t-tests were used for comparison between the two groups. Receiver operating characteristic (ROC) curves and the area under the ROC curve (AUC) were used to evaluate the accuracy of biomarkers in the diagnosis of sepsis. To study the impact of the combination of GRP78 and CHOP for diagnosis, ROC curves analysis was based on binary logistic regression. A two-sided P value <0.05 was considered statistically significant.

The CRP, PCT, APACHE II, and SOFA of group I patients were higher than those of group II patients. Age, IL-6, and LAC between two groups have no significant difference (P>0.05; Table 1). The serum GRP78 and CHOP levels at day 1 in group I were higher than those in group II (P<0.001; Table 2). Furthermore, the mortality rate of sepsis infected patients (group I) was higher than that of non-septic patients (group II; Table 1), with the outcome at day 28 in the ICU as the end point.

An analysis of the diagnostic value of GRP78 and CHOP for sepsis at days 1, 2, 3, and 7 after admission to intensive care unit 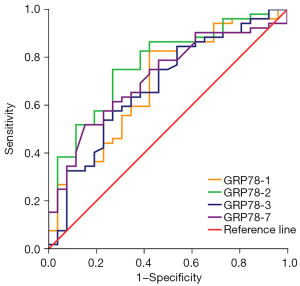 Figure 1 The ROC curve of GRP78 as a marker for diagnosis of sepsis at days 1, 2, 3, and 7 after admission to ICU. ROC, receiver operating characteristic curve; GRP78, glucose regulated protein 78; ICU, intensive care unit. 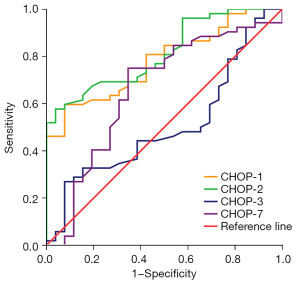 Figure 2 The ROC curve of CHOP as a marker for diagnosis of sepsis at days 1, 2, 3, and 7 after admission to ICU. ROC, receiver operating characteristic; CHOP, C/EBP homologous protein; ICU, intensive care unit. 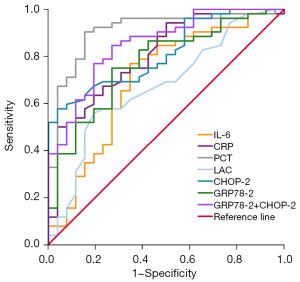 The traditional indicators commonly used in the clinical assessment of infections, such as PCT, CRP, IL-6, and LAC, can be influenced by many factors, especially in the elderly who are often complicated by low immune function and body response. Thus, elevated levels of these indicators may not accurately reflect the severity of disease. Studies using sepsis models have increasing demonstrated that CHOP and GRP78 are important mediators and markers of ERS (6,8-12). During the occurrence of sepsis, the ERS pathway is activated, and the expression of CHOP and GRP78 are enhanced. In this study, the serum levels of GRP78 and CHOP in the sepsis group were significantly higher than those in the non-sepsis infected group (P<0.05).

GRP78 is a signature molecular chaperone of ERS and a member of the heat shock protein 70 family (13). Under physiological action, GRP78 participates in the correct folding of proteins in the endoplasmic reticulum and assists in the transmembrane transport of proteins. GRP78 is an important molecule that promotes the normal synthesis and maturation of proteins and maintains the normal physiological function of cells (14). GRP78 binds to the transmembrane proteins the inositol-requiring enzyme 1α (IRE1α), PKR-like endoplasmic reticulum kinase (PERK), and transcription factor 6 (ATF6), and inhibits the activity of these transmembrane proteins, leaving them in an inactivated state (15,16). Under acute stress, GRP78 separates from the transmembrane proteins, activating the unfolded protein response (UPR). The UPR further promotes the expression of GRP78 chaperone proteins, and thus plays a protective role in the endoplasmic reticulum itself. Therefore, the upregulation of GRP78 expression is specific for the ERS response, and is considered to be a sensitive marker of ERS (17). Studies by Teng et al. (18) and Zhang et al. (8) demonstrated that GRP78 expression was elevated during lipopolysaccharide (LPS)-induced acute kidney injury, and that downregulation of GRP78 inhibited ERS, thereby reducing sepsis-associated acute kidney injury. In this current study, the serum GRP78 content of patients with sepsis was higher than that of non-septic patients and healthy controls. When GRP78 was used for the diagnosis of sepsis, the diagnostic efficiency was the highest on the second day, and the optimal threshold was 157.29 ng/L. In addition, it has good sensitivity and specificity in the diagnosis of sepsis, and can be used as one of the indicators for critically ill patients. Therefore, changes in GRP78 expression may be helpful for evaluating the severity of sepsis and guiding treatment regimens. However, this study found that GRP78 was not an effective prognostic predictor of sepsis.

CHOP is a specific transcription factor that mediates ERS-induced apoptosis. It is lowly expressed in normal cells, but is activated by IRE1α, PERK, and ATF6 during ERS, resulting in significantly increased mRNA and protein expression levels (19). A large number of studies (20-23) have shown that overexpression of CHOP can block the cell division cycle, negatively regulate cell growth, and induce cell apoptosis. Therefore, CHOP is considered to be the most important specific proapoptotic factor of ERS. Other investigations have also reported that the expression of CHOP is increased in sepsis mouse models, and inhibition of CHOP expression can reduce the systemic inflammatory response (8,23). Liu et al. also demonstrated upregulation of CHOP in rat sepsis models, and inhibition of the CHOP apoptotic signal alleviated sepsis-induced lung injury (9). In this study, the serum CHOP content of patients in the sepsis group was higher than that of patients in the non-sepsis infection group. When CHOP was used for the diagnosis of sepsis, the diagnostic efficacy was the highest on the second day, with an optimal threshold of 4.915 ng/L. While specificity was high, sensitivity was poor. These results suggested that CHOP may provide a novel direction for the accurate diagnosis of sepsis.

The poor homogeneity patients with sepsis, such as nutritional status, underlying diseases, and the presence of complications, may affect prognosis, and these factors should be investigated in future studies. Furthermore, the limited sample size of this study requires future studies with a larger sample size. GRP78 and CHOP may play a certain role or have a certain predictive value in the prognosis of patients with sepsis, however, more clinical trials are warranted to verify this. In conclusion, GRP78 and CHOP were effective as diagnostic markers for patients with sepsis.

Funding: The study was supported by the Scientific Research Project of Shanghai Municipal Commission of Health and Family Planning (No. 20174Y0126).

Reporting Checklist: The authors have completed the STARD reporting checklist. Available at https://atm.amegroups.com/article/view/10.21037/atm-22-1445/rc

Conflicts of Interest: All authors have completed the ICMJE uniform disclosure form (available at https://atm.amegroups.com/article/view/10.21037/atm-22-1445/coif). The authors have no conflicts of interest to declare.

Ethical Statement: The authors are accountable for all aspects of the work in ensuring that questions related to the accuracy or integrity of any part of the work are appropriately investigated and resolved. The study was conducted in accordance with the Declaration of Helsinki (as revised in 2013). This research project was approved by the Ethics Committee of Shanghai East Hospital and Shanghai Cancer Center, Fudan University, and was implemented with the informed consent of the patients.