Immediately after being collected, the diagnostic blood specimens need to be conveyed to the sites of testing, which can be allocated even at a very long distance from the collection site. Notably, the ongoing trend toward consolidating multiple areas of diagnostic testing (especially second and third line analyses) into larger diagnostic facilities has enormously magnified the challenges emerging from transportation of biological samples (4). Indeed, the more critical phases of shipment should be accurately optimized and standardized to ensure that the quality of the specimens is preserved upon reaching the testing sites, so that they can be used for producing reliable test results. Hand transportation for close distance, along with transportation by “wheels” (thus including motorcycles, cars, tracks and other motor vehicles) and even planes or helicopters for longer routes, have been the most popular means for transporting blood specimens throughout the relatively short history of laboratory diagnostics. However, remarkable advances have occurred in the past 20 years, thus making it possible to adapt newer technology for the purpose of shipping biological samples. A first and already consolidated approach was based on development of pneumatic transport system (PTS), which were invented by the Scottish engineer William Murdoch in the 19th century for delivering letters, and then specifically redesigned to meet the handling requirements for laboratory samples, blood bags and drugs. The original problems encountered with these systems, mainly attributable to potential injury of corpuscular blood elements due to high acceleration and deceleration forces, have been mostly overcome, so that the use of PTSs is now commonplace in many healthcare facilities around the globe. The only persisting drawback is the potential impact of high speed transportation on platelet activation, whereas additional issues of sample quality are no longer reported (5,6). Another inherent and rather obvious limitation of PTSs is represented by the limited range of space that can be covered with the tubes, which makes these systems only suitable for shipping samples for a narrow distance, most frequently within the physical boundaries of a hospital.

More recently, another option has been borrowed from different uses for shipping biological samples. A drone, also known as unmanned aerial vehicle (UAV) or unmanned aerial systems (UAS), is conventionally defined as an aircraft without a human pilot aboard, originally developed for military purposes. These devices have an approximate cost of $10,000, can fly at an approximate speed of 40–60 miles per hour, carry ~5-pound payload for 30 to 60 min of flight time, within a range of 20 to 60 miles. The International Civil Aviation Organization (ICAO) currently classifies drones in two categories under the Circular 328 AN/190, i.e., autonomous aircrafts (those autonomously controlled by onboard computers) and remotely piloted aircrafts (those controlled by a human pilot on the ground or in another vehicle). The use of the former class of vehicles is currently prohibited due to legal and liability issues, whereas the latter class is subjected to civil regulation under ICAO and according to relevant national aviation authority.

In a recent pilot study, Amukele and colleagues convincingly showed that the drones may be suitably used for transportation of laboratory specimens (7). Interestingly, no impact on accuracy of testing was observed for a vast array of routine clinical chemistry, hematology and coagulation analyses after flying blood samples with drones. Although it is undeniable that the shipment of blood samples through UASs under controlled conditions of time, temperature, speed, injury protection and sunlight exposure would not significantly impair the quality of the specimens, there are additional aspects that should be considered before routine implementation of these aircrafts for healthcare purposes. More specifically, a number of hazardous events caused by malfunctioning of drones have recently been reported.

During an US Open tennis match in September 2015, a UASs crashed into an empty section of the Louis Armstrong Stadium, which has a seating capacity of about 10,000 (8). It was just a lucky event that no spectator was sitting in the near area of the crash, and that no one was injured. In October 2015, another drone heavily crushed into the power lines in West Hollywood, California, causing a vast electricity blackout (9). In November 2015, a UAS flying near to the gigantic Ferris wheel in Seattle collided with the massive metal structure of KIRO TV, then falling in pieces to the ground and missing, just for chance, many pedestrians (10). In December 2015, a drone crashed during the Ski World Cup slalom in December 2015 in Madonna di Campiglio (Italy), nearly missing the 5-time Alpine sky World champion Marcel Hirscher (11). A dramatic civil involvement was reported in November 2015, when a British toddler left an eye because a neighbor lost control of a drone after the rotors clipped a tree, and the UAS then crashed into the young child (12). These five recent events are only the tip of the iceberg. A specific website, designed to cover the crashes of military drones since the 2007 lists as many as 225 UASs accidents thus far (13), so emphasizing that the risks linked to fly these devices are nothing but meaningless.

The many problems still emerging from the shipment of biological specimens highlight the need to place more efforts for improvement and standardization. At the down of the third millennium, the progress in healthcare cannot be disjointed form the use of emerging technology, and many healthcare organizations have already deployed industrial technology to improve their efficiency. The popularity of remote controlled aircrafts such as UASs is constantly increasing around the globe for recreational or civilian use, the latter including humanitarian response and disaster relief (14). The main concern here, is that although shipping blood samples by drones can be seen as a fast and efficient means compared to current options (Table 1), safety remains an unmet need. The risk that humans get injured or even contaminated by colliding with UASs carrying blood tubes is still too high to be affordable at present (Figure 1). A specific regulation should also be issued to police drone manufacturing, functioning and potential healthcare usage. Notably, transportation of biological samples is a unique healthcare activity. Almost each and every vehicle used for this purpose should be considered an in vitro diagnostics (IVD) device al large, and be subjected to strict control by national or international regulatory bodies such as the US Food and Drug Administration (FDA), the European Community (EC) or the China State Drug Administration (CSDA) (15). In particular, drones for conveying blood to clinical laboratories should be equipped with cooler or heating systems to maintain the blood at an appropriate temperature, blood containers should be accurately packaged for preventing inadvertent exposure or tampering during transportation, and light exposure should be minimized for avoiding degradation of photosensitive molecules. Flying drones would also imply that specific areas should be made available within the healthcare facilities, to enable safe take off and landing. Last but not least, a deregulated diffusion of UASs implies a perilous future, characterized by skies filled with drones, thus enormously magnifying the risk of crashes or collisions with birds, aircrafts and/or humans (Table 2). Therefore, many doubts remain as to whether the promises of using drones for shipping blood specimens will soon overcome the actual perils. 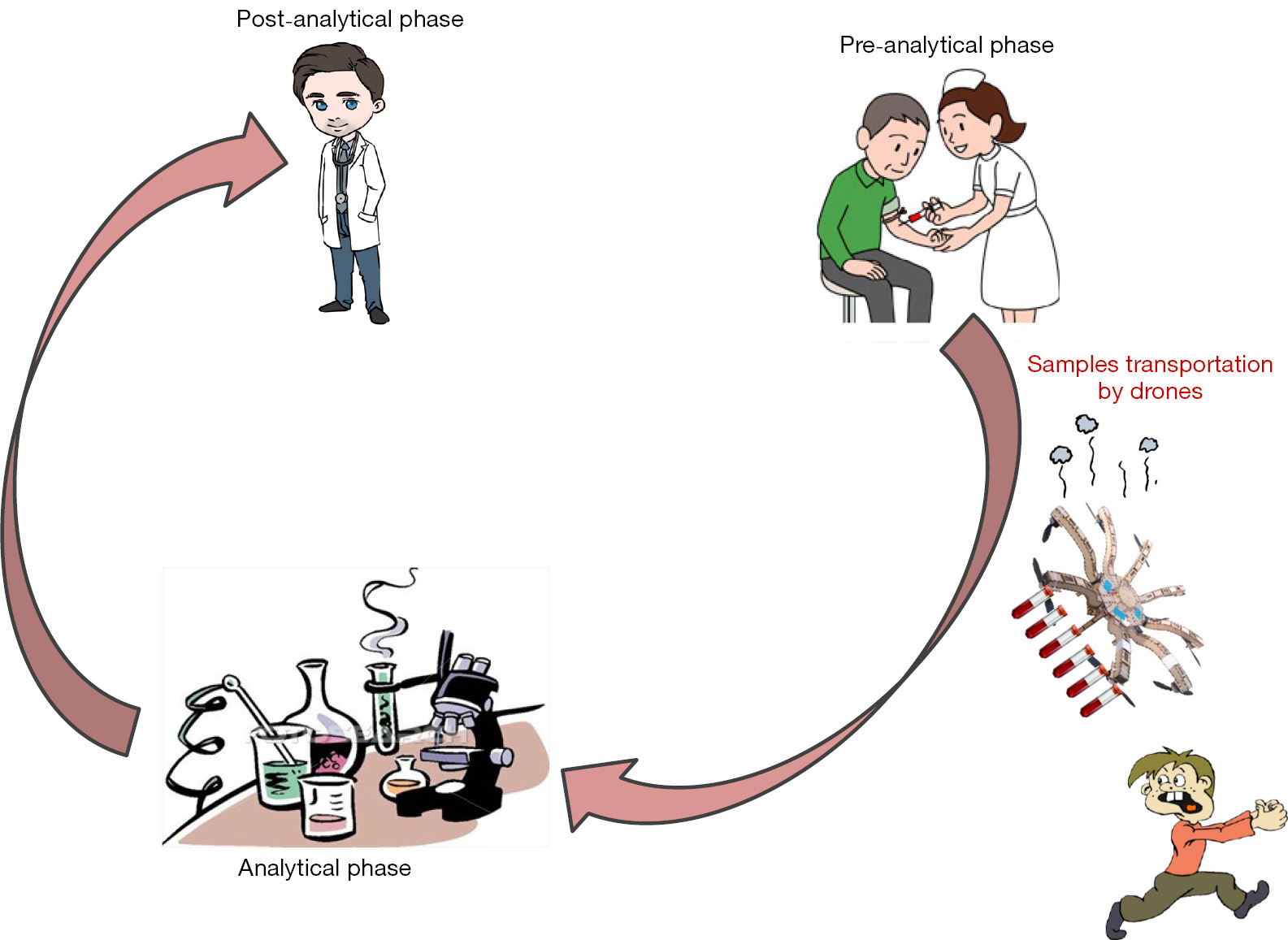