Esophageal cancer is the eighth most common cancer in the world. It is also the sixth leading cause of death from cancer worldwide (1,2). In 2001, over 300,000 cases of esophageal cancer were reported in the world (3). In 2012, approximately 450,000 people (3.2% of all cancers) suffered from the cancer, and 400,000 patients (4.9% of the total) lost their lives due to cancer worldwide. It highlighted an increase in incidence in the last decade, and it is expected to quickly increase its incidence (4,5). Low survival rate and rapid progression of this cancer are main features of this cancer (6,7). Despite medical advances in recent decades for the treatment of cancer, 5-year survival rate for patients is less than 20% (8). More than 80% of cases and deaths from the cancer occur in developing and less developed countries (9,10). Geographically dispersed distribution is the distinguishing feature of esophageal cancer (9). The highest incidence of esophageal cancer in the world was observed in China, Northeastern of Iran, southeast of United States, and South of Africa (1,11). Asian belt of the cancer begins from East of Turkey and Northeastern of Iran, and continues to the East Asian countries, including North and center of China. The incidence of the cancer in these areas is more than 100 per 100,000 (1,11). Esophagus cancer more occurs in men. Sex ratio (male to female) varies from 2 to 4 times. However, in some areas it occurs equally in men and women, which represents the same exposure to causal factors of the disease (3,12). The incidence of esophagus cancer is different in both men and women in various regions of the world about 20 times, in men from 0.8 per 100,000 in West Africa to 17 per 100,000 in East Asia and in women from 0.02 per 100,000 in Micronesia/Polynesia (central and southern Pacific) to 7.8 per 100,000 in East Africa (4,5). Two types of morphologies known for the cancer are squamous cell carcinoma (SCC) and adenocarcinoma (ADC). Different epidemiological features and risk factors are also considered for the cancer. Alcohol, smoking, malnutrition, a history of head and neck cancer, frequent consumption of beer, and other factors are the main causes of SCC, while the ADC is more associated with gastro esophageal reflux and Barrett’s esophagus, obesity, age, and male sex (8,12-14). Exposure to X-rays also increases both the type of cancer (15). Most cases of esophagus cancer are SCC (16), but the incidence is decreasing for unknown reasons. In contrast, the incidence of ADC is rising (17). Esophagus cancer has not a good screening, but it can be detected at an early stage using endoscopy every three to 5 years in people at high risk, such as Barrett’s esophagus, heavy smokers, and heavy alcohol consumers (17,18). Life style is one of the effective factors on the distribution of the cancer, and it is strongly influenced by individuals’ socio-economic level. Studies found that people with low socio-economic level due to poor nutrition, excessive alcohol consumption, and smoking are more likely to SCC. The incidence is higher in patients with a lower income level than those who have a high income level (19). People with low education and low socio-economic level are also more likely to die from the cancer due to lack of access to proper medical services (20-22).

HDI is one of the indicators related to the position of a country in three basic aspects of development, and a composite of longevity, knowledge, and standard of living. Longevity is measured with life expectancy at birth, knowledge with potential years of education, and standard of living with GPD per capita or income. HDI is a number between zero and one. According to HDI, countries in the world are divided into four categories, as follows: Countries with very high HDI (HDI ≥0.9), countries with a high HDI (HDI ≥0.8), middle HDI countries (0.8> HDI >0.5), and countries with a low HDI (HDI ≤0.5). The index was proposed by UNDP in 1990 as an indicator comparing countries in three human dimensions. On average, HDI was reported from the Arabic countries about 0.682, East Asia and Pacific 0.703, and South Asia 0.588. The mean the index in some Asian countries is lower than the global mean (0.702) in 2013 (23).

This study was an ecologic study in Asia for assessment the correlation between age-specific incidence and mortality rate (ASR) of esophageal cancer with HDI and its details that include: Life expectancy at birth, Mean years of schooling and gross national income (GNI) per capita. Data about the ASR for every Asian counter for year 2012 get from global cancer project that available in (http://globocan.iarc.fr/Default.aspx) and HDI from Human Development Report 2013 (23) that includes information about HDI and its details for every country in the word for year 2012.

The methods of estimation are country specific and the quality of the estimation depends upon the quality and on the amount of the information available for each country. In theory, there are as many methods as countries, and because of the variety and the complexity of these methods, an overall quality score for the incidence and mortality estimates combined is almost impossible to establish. However, an alphanumeric scoring system, which independently describes the availability of incidence and mortality data, has been established at the country level. The combined score is presented together with the estimates for each country with an aim of providing a broad indication of the robustness of the estimation.

HDI is a composite measure of indicators along three dimensions: life expectancy, educational attainment and command over the resources needed for a decent living. All groups and regions have seen notable improvement in all HDI components, with faster progress in low and medium HDI countries. On this basis, the world is becoming less unequal. Nevertheless, national averages hide large variations in human experience. Wide disparities remaining within countries of both the North and the South, and income inequality within and between many countries have been rising (23).

In this study, we use of correlation bivariate method for assessment the correlation between ASR with HDI and its details that include life expectancy at birth and mean years of schooling and GNI per capita. Statistical significance was assumed if P<0.05. All reported P values are two-sided. Statistical analyses were performed using SPSS (Version 15.0, SPSS Inc. USA). 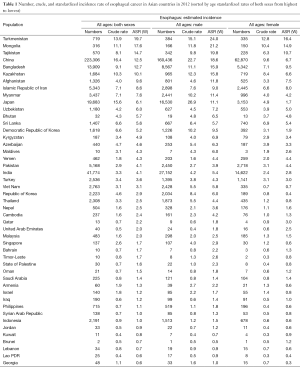 Table 1 Number, crude, and standardized incidence rate of esophageal cancer in Asian countries in 2012 (sorted by age standardized rates of both sexes from highest to lowest)
Full table 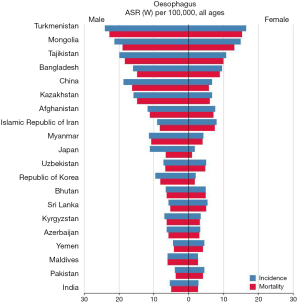 Figure 1 Standardized incidence and mortality rates from esophageal cancer in Asia in 2012 (extracted from GLOBALCAN 2012, http://globocan.iarc.fr) (5). 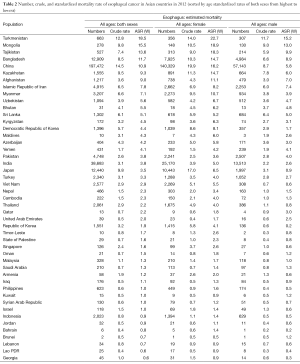 Table 2 Number, crude, and standardized mortality rate of esophageal cancer in Asian countries in 2012 (sorted by age standardized rates of both sexes from highest to lowest)
Full table 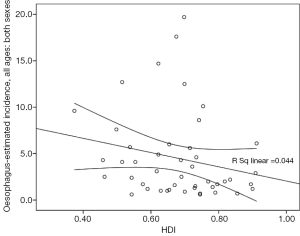 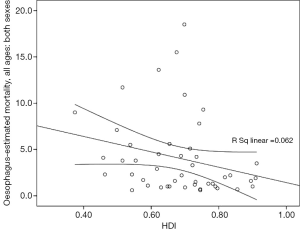 More than 75% of esophageal cancers in the world occur in Asia, because of Asian belt of esophageal cancer. The disease is affecting many countries (4,10,25). Given that more than 60% of people and most developing countries in the world are in Asia. It is expected to dramatically increase the cancer in the continent. Therefore, health macro policies to deal with this cancer in the future are an important requirement (4,5).

Another dimension of HDI was the level of education or awareness. However, no significant relationship was found between the SMR for the cancer and education, but other studies have shown that increasing the level of awareness reduced high-risk behaviors including smoking, alcohol consumption, physical inactivity, and poor lifestyle, that cause the cancer. It has been shown that educated people more tend to pay attention to health messages and checkup themselves for early detection of cancer (26).

One of the dimensions of HDI is the level of income, characterized by gross domestic product. In our study, there was no relationship between income, and mortality and incidence rates of esophageal cancer. Brown revealed that people with low income more consume smoking and alcohol, and consume fruits and vegetables less than those with higher incomes (19). Multiple regression analysis showed that black men are more likely to suffer from this cancer (27). Lifestyle changes, avoiding the risk of esophageal cancer in these individuals, and periodic examinations in the patients at high risk (Barrett’s esophagus, heavy smoker, and heavy alcohol consumer) are a priority in these people (17-19).

This was an ecological study. The ecological fallacy will occur if results are inferred and concluded at the individual level. The results of this study are attributable only at the population level.