Esophageal cancer is one of the most common malignancies in china, accounting for around 50% of incidence world-wide (1). Surgery is still one of the principal treatment methods for patients with esophageal cancer. Patients with thoracic esophageal cancer were found to have relatively high cervical lymph node metastasis rate, ranging from 17.2% to 49.5% (2-4). The number of metastatic lymph nodes is a principal prognostic factor predicting the outcome of surgery (5,6). While report based on mass cases had never been found on prognostic factors in patients neither with lymph node metastasis nor distant metastasis (pT1-4aN0M0). Compared with traditional 2-field lymphadenectomy, esophagectomy plus lower cervical, mediastinal and upper abdominal lymph node resection, i.e., 3-field lymphadenectomy exhibits better surgical exposure, and is also considered to play a pivotal role in understanding the nodal metastatic pattern, and determining postoperative staging as well (2-4).

Seven hundred and seventy patients, diagnosed of thoracic esophageal squamous cell carcinomas only, had undergone subtotal esophagectomy plus 3-field lymphadenectomy, and pathologically staged of pT1-4aN0M0 were entered into the study to find out the possible prognostic factors and the value of prophylactic postoperative radiotherapy. The study was performed in accordance with the Declaration of Helsinki and was approved by the ethics committee of Fujian Provincial Cancer Hospital. All patients provided written consent for storage of their information in the hospital database and for use of this information in our research.

Patients were involved in this study if they: (I) had received radical esophagectomy and 3-field nodal dissection in the first treatment; (II) had no evidence of distal hematogenous metastasis found in preoperative chest CT scanning, abdominal CT scanning and systematic ECT bone scanning; (III) with a strictly pathological diagnosis of squamous cell carcinoma only and no evidence of nodal metastasis; (IV) had not received radiotherapy or chemotherapy before surgery or chemotherapy after surgery; and (V) had untaken more than 15 lymph nodes removed in surgery. From January 1993 to March 2007, 2,665 patients with thoracic esophageal squamous cell carcinoma were treated with surgery at Fujian Province Cancer Hospital, Fuzhou, Fujian, China. A total of 1,090 cases of pathological diagnosis of lymph node metastasis, only 770 cases met with our criteria, 320 were excluded from this analysis for having received preoperative chemotherapy or radiation (156 cases), postoperative chemotherapy or postoperative concurrent chemoradiation (30 cases), surgical procedures other than an extended esophagectomy with 3-field lymphadenectomy that included removal of at least 15 nodes (126 cases), having had other malignancies before the diagnosis of esophageal cancer, or having had disease of mixed histology (4 cases), R2 resection (4 cases). Of those 770 patients, 687 had received surgery only (aged 28-84 years, median 57 years), and 83 patients had undergone surgery followed by postoperative radiation therapy (aged 32-78 years, median 53 years). Altogether, 18,893 nodes had been removed, with a mean of 24.5 nodes per patient (range, 15-68).

Radiotherapy was started 3-4 weeks postoperatively. The median radiation dose to the tumor bed was 50 Gy in 25 fractions at 2 Gy per fraction, 5 days a week.

All patients took clinic visit every 3-6 months for 1-2 years, every 6-12 months for 3-5 years. They regularly received chest CT scanning, abdominal CT scanning and systematic ECT bone scanning every 3-6 months and had esophagogastroscopy every year. Until the final day of follow-up on March 1, 2009, the number of cases of 1, 3, 5, 10 years follow-up was 633, 444, 258 and 75, respectively. Lymph node metastasis, local recurrence and hematogenous metastasis were judged according to clinical signs and various kinds of imaging examinations. For the entire study patients, the overall survival rates at 1, 3, 5, and 10 years were 92.9%, 80.8%, 71.7%, and 57.4%. 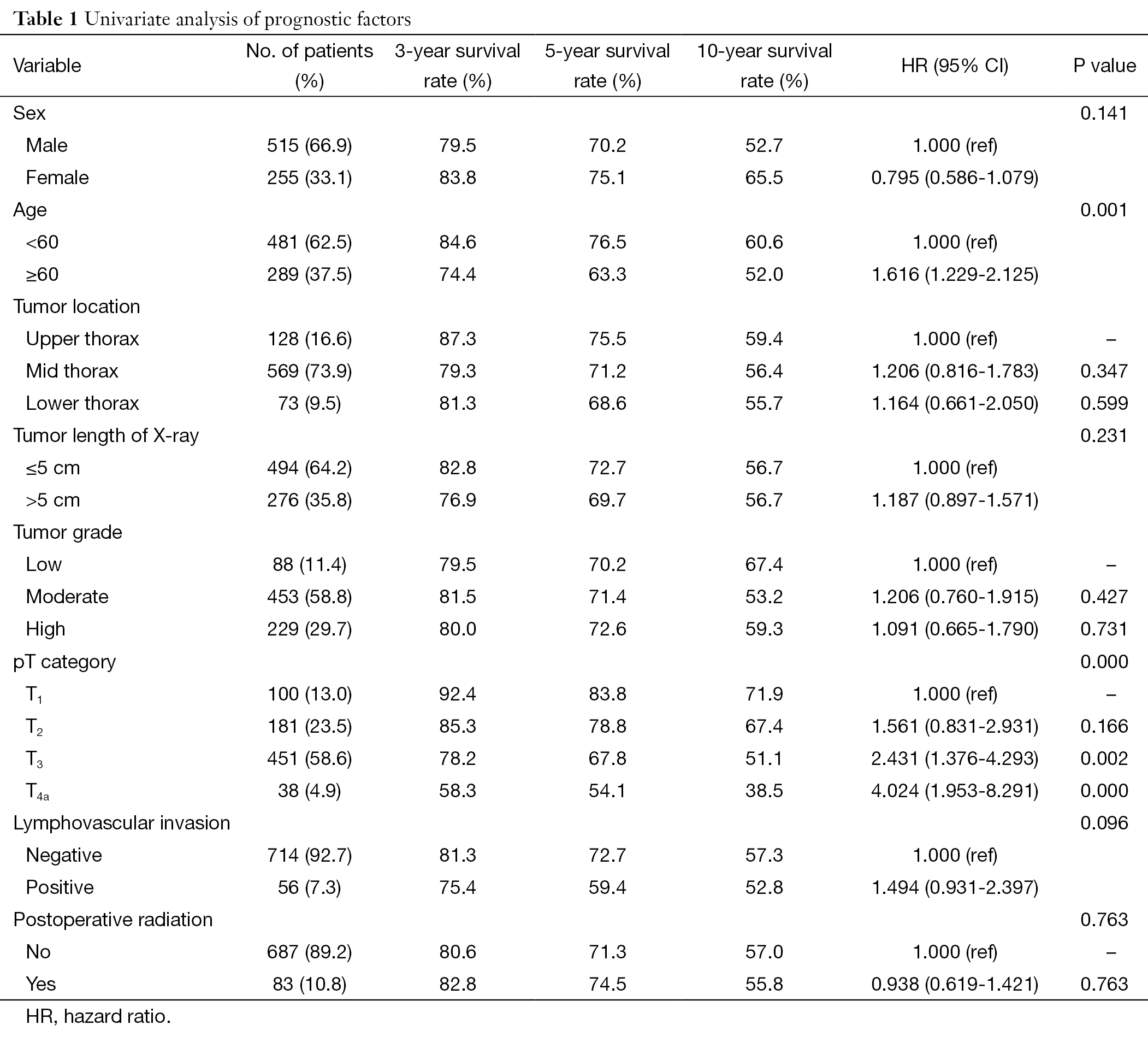 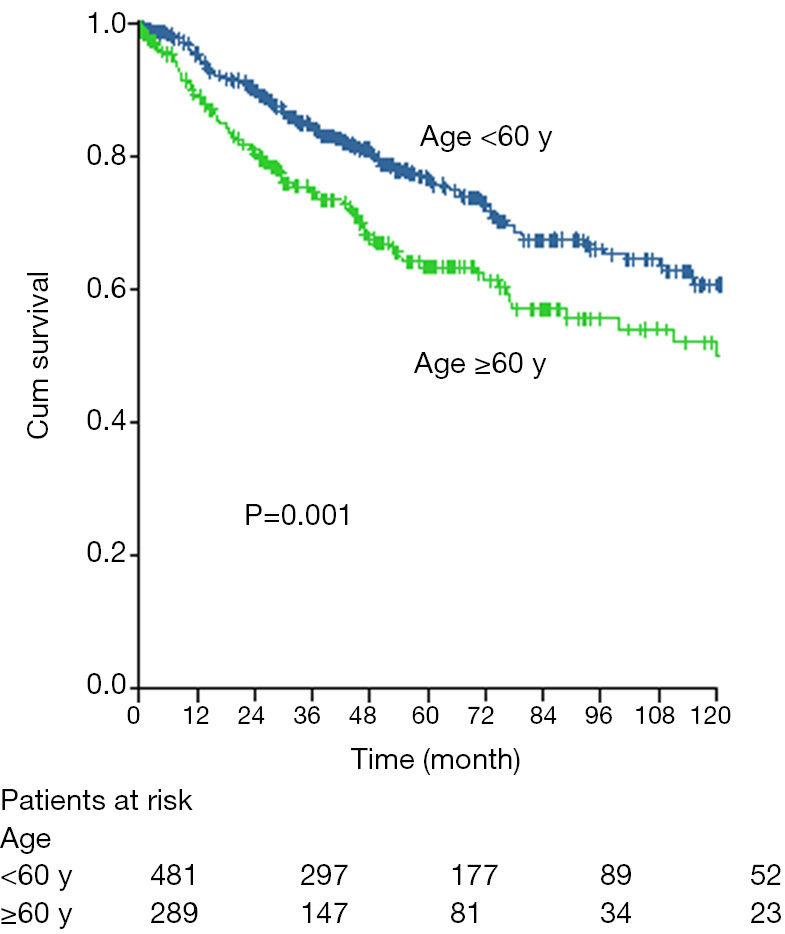 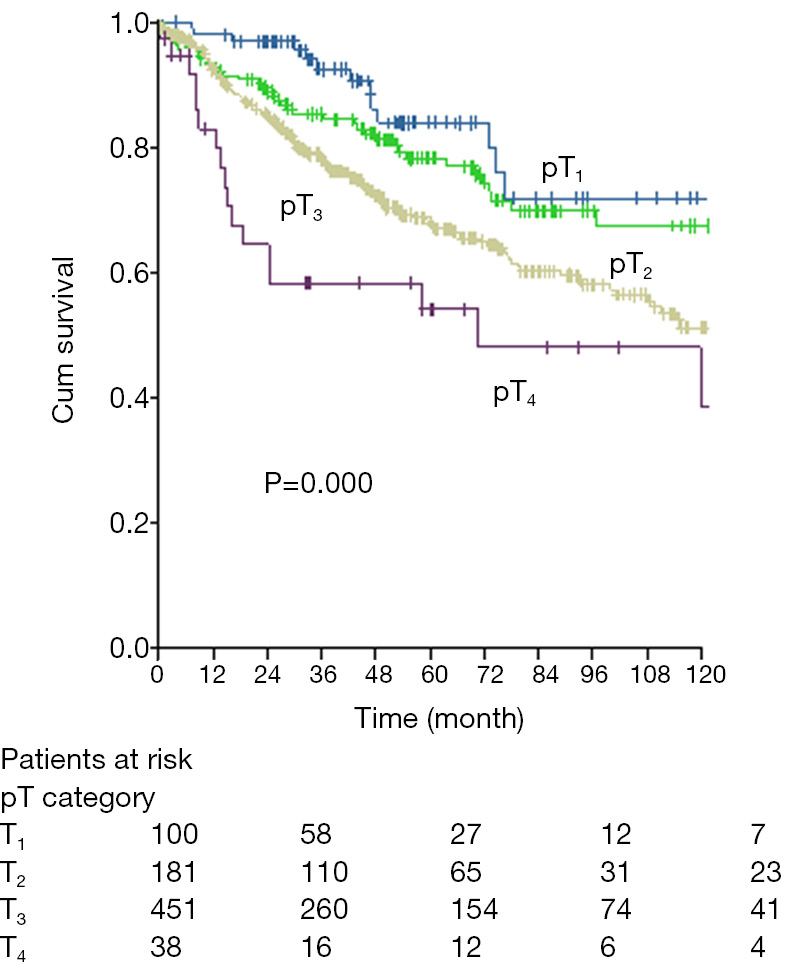 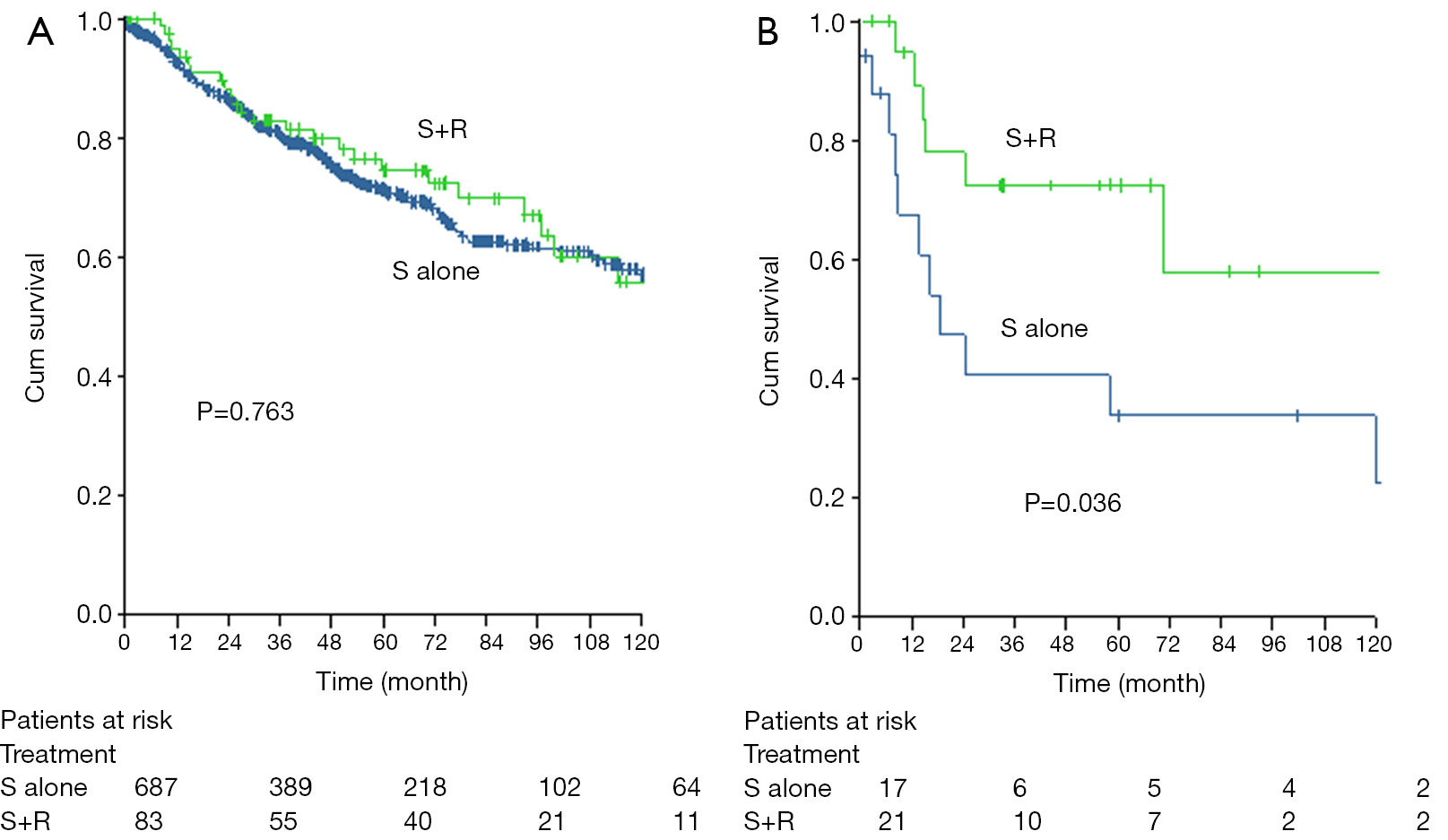 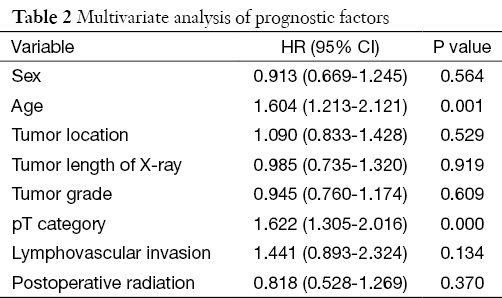 Analysis of the reasons for failure

It’s indicated in our study that both age and pT staging were significant and independent factors influencing the prognosis of patients at a stage of pT1-4aN0M0. Those with an advanced staging of pT and with an age more than 60 turned out with an unsatisfactory prognosis. Although it’s reported that postoperative radiotherapy made no significance in the survival rate, some further studies concluded that it could not only reduce the incidence of relapse in tumor bed but also boost the survival of those with a lesion longer than 5 cm and at a stage of T4a.

In conclusion, age and T staging were independent prognostic factors for patients with thoracic esophageal carcinoma staged pT1-4aN0M0 undergone esophagectomy with 3-field lymphadenectomy. Patients with high T staging and at an age more than 60 turned out bad prognoses, neither could postoperative radiotherapy improve their survival.

This research was supported in part by Fujian Provincial Foundation for Medical Innovation (2009-CXA-13) to K Zhu and X Chen.