Follicular regulatory T cells (Tfr) cells are a recently identified class of regulatory T cells (Tregs) that maintain stable expression of ICOS, CXCR5, CD4 and Foxp3 (1). The main function of Tfr cells is to regulate humoral immunity in the germinal center by suppressing follicular helper T cells (Tfh) cells and B cells (2,3). A lack of Tfr cells might result in greater germinal center reactions (2,3). It has been confirmed that Tfr cells play a critical role in the development of non-small cell lung cancer (NSCLC), lymphoma, and other autoimmune diseases (4-6). Research has shown that Tfr cells are abundant in the lymph nodes of early stage diffuse large B cell lymphoma (DLBCL) patients, but reduced in advanced stage DLBCL patients; thus, Tfr cells may be strongly related to prognosis (7). It should be noted that T-cell immunoglobulin mucin 3 (TIM-3), one of the important immune suppressive receptors, could also co-express on the surface of Tfr cells with programmed death-1 (PD-1) (8). In the tumor microenvironment (TME), an obviously increased expression of TIM-3 could interact with T cells by containing the ligand, and be involved in the development of tumors (9,10).

Breast cancer (BC) is one of the most common malignant tumors in women, and approximately 25% of early-stage BC patients relapse within 5 years even with the implementation of surgery, chemotherapy, endocrine therapy, and other effective strategies, such as PD-1 immunotherapy (11,12). The phase III IMpassion130 trial (NCT02425891), which compared chemotherapy plus atezolizumab and chemotherapy, examined immunotherapy in the treatment of BC, and the Food and Drug Administration (FDA) has accelerated the approval of atezolizumab (13). Recently, more and more research has confirmed the inseparable relationship between the progression of BC and the immune system (14-16). Interestingly, the imbalance of Tfr/Tfh cells has been reported to be the potential cause of BC (17). It is thought that Tfr cells might synergistically promote the formation of interleukin-10 (IL-10)-produced B cells in breast carcinoma (17). Additionally, recent studies have also shown that the co-blocking of PD-1 could further upregulate the expression of TIM-3 on the surface of Treg in TNBC, and TIM-3 may be a targeted biomarker related to the resistance of PD-1 blockers (18). Tfr cells are likely to mediate the immune escape of BC through the TIM-3 pathway. Thus, the identification of key molecular targets of Tfr cells could provide a new basis for the optimization of immunotherapy.

In this study, we sought to clarify the characteristics of circulating Tfr (cTfr) cells and TIM-3 in BC patients by measuring the frequency of Tfr cells. We also examined the expression of immune cells in TNBC to gain insights into the function of cTfr cells in BC. We present the following article in accordance with the MDAR reporting checklist (available at https://dx.doi.org/10.21037/atm-21-3848).

Thirty-five female BC patients and 30 age- and sex-matched healthy control patients were identified at the Cancer Hospital of the University of Chinese Academy of Sciences/Zhejiang Cancer Hospital from March 2020 to September 2020. The patients were confirmed to have invasive breast carcinoma by surgical resection or puncture, and the pathological stage was classified according to the international tumor (T), nodes (N), and metastases (M) staging system for BC. Seventeen patients had early BC and 18 patients had advanced BC. In relation to the histological subtypes, 12 patients had TNBC, 12 patients had human epidermal growth factor receptor 2 positive (HER2+) BC, and 7 patients had luminal BC. The clinical characteristics of the BC patients are set out in Table 1. The lactate dehydrogenase (LDH) records of these patients were retrospectively collected. 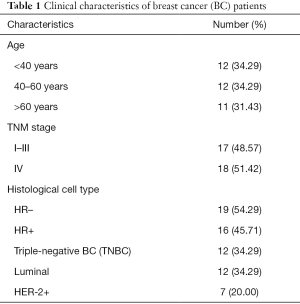 Additionally, 6 female TNBC and 3 age- and sex-matched healthy control patients were identified at our hospital from October 2020 to December 2020. Of these 6 patients, 3 were preoperative patients and 3 were recurrent and progressive patients.

All patients and healthy control patients were aged from 40 to 60 years old. Patients who had already received glucocorticoids, immunotherapy, or who had been diagnosed with other autoimmune diseases were excluded. 4 mL-peripheral blood samples of patients were used in this research. All procedures performed in this study involving human participants were in accordance with the Declaration of Helsinki (as revised in 2013). The study was approved by institutional ethics board of Cancer Hospital of the University of Chinese Academy of Sciences/Zhejiang Cancer Hospital (No.: IRB-2020-14). Individual consent for this retrospective analysis was waived.

Peripheral blood mononuclear cells (PBMCs) were isolated from the 4 mL-peripheral blood samples using Ficoll separation. The PBMCs were adjusted to 1×109/L in Roswell Park Memorial Institute Medium (RPMI) 1640 (containing 10% fetal bovine serum) and incubated with fluorophore tagged anti-human CD3, CD4, and CXCR5 for 30 min at room temperature. The cells were then washed twice with phosphate buffered saline (PBS), and intracellular Foxp3 staining was performed with the Transcription Factor Staining Buffer Kit for 50 min at 4 °C. After fixation and permeability, anti-Foxp3 monoclonal antibody and fixed cells were incubated at 4 °C in the dark for 30 min. Finally, the sample were washed again and analyzed at FACS Canto II.

To determine the expression of TIM-3 on the surface of Tfr cells in TNBC, the cells were stained with anti-CD4, CXCR5, CD25, CD19, CD8, and TIM-3 for 30 mins at room temperature (see Table 2). The other steps were the same as those outlined above. Finally, samples were analyzed on Helios Cytof System (Fluidigm, USA). All of the antibodies used were purchased from BD Biosciences (San Diego, CA, USA).

The data are expressed as mean ± standard deviation (SD) and Boxplot. R Studio (version 3.6.2) was used for graphics production. The differences in the peripheral blood Tfr cells among different groups, BC stages, molecular types, and the expression of TIM-3 in TNBC were evaluated using T-tests. A P<0.05 on both sides was considered statistically significant. Flowjo was used to draw the t-distributed stochastic neighbor embedding (t-SNE) diagram to show the expression distribution and content of surface antigens in the human peripheral blood immune cells.

To study the potential role of Tfr cells in BC, we quantitatively analyzed the differences of CD4+CXCR5+CD25+Foxp3+Tfr cells in the peripheral blood of 35 patients and 30 healthy age- and sex-matched control patients by flow cytometry (see Figure 1A). The patients’ demographic and clinicopathologic characteristics are listed in Table 1. As Figure 1B shows, the percentage of circulating CD4+CXCR5+Foxp3+Tfr cells was significantly higher in BC patients than healthy control patients (23.47%±9.70% vs. 10.99%±4.68%; t=−6.59; P=0.001). We also analyzed the percentage of cTfr cells in the peripheral blood of patients with different stages of BC. Our results showed that early-stage disease BC patients had a higher percentage of cTfr cells than advanced stage BC patients (28.52%±10.75% vs. 18.69%±5.19%; t=3.31; P=0.006; see Figure 1C). 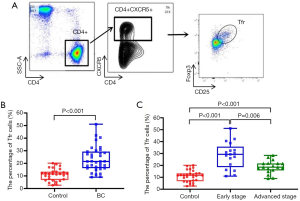 The relationship of cTfr cells with different histological types 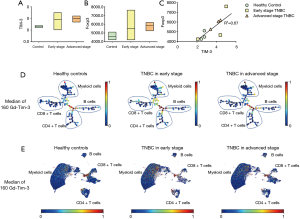 In this study, we found that the level of CXCR5+FoxP3+Tfr cells was increased in the peripheral blood of BC patients, especially in early-stage BC and TNBC patients. Further, we found a positive correlation between CXCR5+FoxP3+Tfr cells and LDH. Additionally, we showed that the expression level of TIM-3 on the surface of Tfr cells was also significantly higher in TNBC patients than healthy control patients, and was negatively correlated with the related auto-antibodies. Our results provide significant insights into the role of Tfr cells in the pathogenesis process of BC.

Studies have shown that Tfr cells play an important role in the development of autoimmune diseases and tumor diseases; for example, the frequency of FoxP3+CXCR5+CD4+Tfr cells in the peripheral blood of diffuse large B cell lymphomas(DLBCL) patients was reported to be significantly increased compared to that of healthy control patients, especially in patients with less advanced stages of DLBCL, and the Tfr cells may be involved in intratumoral immunity (6). Additionally, the results of research on Tfr cells in NSCLC are similar to those for DLBCL. However, very few studies have been conducted on the function of Tfr cells in BC. Indeed, to date, only Hongsheng Song et al. appeared to have examined the expression and characteristics of Tfr cells in BC (17). In the present study, we found an increase of cTfr cells in BC patients, and that the number of Tfr cells was significantly higher in early-stage BC patients than advanced stage. Thus, elevated cTfr cells might be a response to the pathogenesis of BC, and might be related to the disease stage, such that patients with early-stage BC may have stronger immunosuppression than advanced stage BC patients.

We also retrospectively collected the serum LDH records of these patients, and found that LDH levels in early-stage BC patients were significantly lower than LDH levels in advanced stage BC patients. However, we also found that higher CXCR5+FoxP3+Tfr levels were correlated with lower levels of LDH in early-stage BC patients. LDH is an enzyme that catalyzes the interconversion of pyruvate and lactate, which in turn promotes cancer cell invasion, anoikis resistance, and tumor metastasis (19). Several studies have reported that LDH is a poor prognostic factor in BC (20,21). Further, it has been suggested that LDH depletion inhibits the formation of metastases and prolongs the survival of mice with breast tumors by regulating the TME and modulating the immune response (20,21). Tfr cells may be a better indicator of immune suppression in the germinal center of early BC patients than LDH. Notably, there were no significant correlations between CXCR5+FoxP3+cells and LDH levels in advanced stage BC patients; however, these results could be related to this study’s small sample size and the different metastatic sites.

Compared to luminal BC, TNBC and HER2+ BC have higher tumor infiltrating lymphocytes (TILs) (22,23). TIL infiltration is closely related to the prognosis of BC patients and their response after immunotherapy. Numerous studies have shown that the expression of immune checkpoints in tumor cells with high TIL infiltration may be higher that of tumor cells with low TIL infiltration (14,24). In addition, according to a report of Saleh et al. (18), the co-blockade of PD-1 and programmed death-ligand 1 (PD-L1) could further upregulate the co-expression of TIM-3 and Lymphocyte activation gene-3 (LAG-3) on CD4+CD25+ T cells and CD4+CD25+Foxp3+Tregs in the presence of TNBC cells. Our results showed that CXCR5+FoxP3+Tfr cells were significantly more abundant in TNBC patients than HER2+ and luminal BC patients; however, no significant difference was found between TNBC and HER2+ BC patients.

Overall, our study showed an increased percentage of CXCR5+FoxP3+Tfr cells in BC patients. We theorize that this might play an important function in the pathogenesis of BC. Our research on the pathway of action of Tfr cells in 6 TNBC patients was only preliminary; thus, the potential mechanisms require further research.

Funding: This work was supported by the National Natural Science Foundation of China (No. 81672597).

Reporting Checklist: The authors have completed the MDAR reporting checklist. Available at https://dx.doi.org/10.21037/atm-21-3848

Conflicts of Interest: All authors have completed the ICMJE uniform disclosure form (available at https://dx.doi.org/10.21037/atm-21-3848). The authors have no conflicts of interest to declare.

Ethical Statement: The authors are accountable for all aspects of the work in ensuring that questions related to the accuracy or integrity of any part of the work are appropriately investigated and resolved. All procedures performed in this study involving human participants were in accordance with the Declaration of Helsinki (as revised in 2013). The study was approved by institutional ethics board of Cancer Hospital of the University of Chinese Academy of Sciences/Zhejiang Cancer Hospital (No.: IRB-2020-14). Individual consent for this retrospective analysis was waived.