Chronic kidney disease (CKD) has been recognized as a growing public health problem and affects 10–15% of the population worldwide (1). It is well established that cardiovascular disease (CVD) is the leading cause of morbidity and mortality in all patients with CKD, accounting for nearly half of all deaths (2,3). Targeting modifiable factors has been frequently recommended as a first-line strategy for reducing kidney disease progression and CVD in patients with CKD. Although some studies have suggested an increased risk of coronary heart disease in autoimmune thyroiditis, the presence of thyroid autoantibodies does not appear to be associated with CVD risk in patients with subclinical hypothyroidism (4,5). To date, little is known about the association of thyroid autoantibodies with renal function or cardiac function in patients with CKD. The aim of the present study was to investigate the relationship between thyroid autoimmunity and cardiac function of patients with stages 3–5 CKD. We present the following article in accordance with the STROBE reporting checklist (available at https://dx.doi.org/10.21037/atm-21-3280).

This is a descriptive cross-sectional study. We recruited a total of 1,477 patients (≥18 years of age) with stages 3–5 CKD, who attended the Department of Nephrology at the Third Affiliated Hospital of Southern Medical University from January 2015 to May 2019. Exclusion criteria were as follows: (I) patients with overt hypothyroidism [thyroid-stimulating hormone (TSH) >4.20 uIU/L] or overt hyperthyroidism (TSH <0.27 uIU/L); (II) patients lacking thyroid peroxidase antibody (TPOAb) and echocardiography data; and (III) patients whose thyroid function was altered due to previous use of thyroid medications. Finally, 1,164 patients (598 men and 566 women, mean age of 64.95±14.84 years) were enrolled in the present study. The study was approved by the Ethics Committee of the Third Affiliated Hospital of Southern Medical University and was conducted according to the Declaration of Helsinki (as revised in 2013). All participants provided written informed consent.

All statistical analyses were carried out using SPSS version 20.0 for Windows (Chicago, IL, USA). Variables with a normal distribution were expressed as the mean ± standard deviation, and those with an abnormal distribution were expressed as the median (interquartile range). Categorical variables were expressed as proportions. Differences in clinical and laboratory values between patients with stages 3–5 CKD were assessed by Pearson’s χ2-test, Wilcoxon test, or analysis of variance. Significant factors from the univariate analysis were included in multiple linear regression analyses to assess the association between thyroid status and echocardiographic parameters. Statistical correlations between factors in each group were analyzed using Pearson’s correlation analysis. Our missing data analysis procedures used missing at random (MAR) assumptions. We used the MICE (multivariate imputation by chained equations) method of multiple multivariate imputation in SPSS. The statistical tests were 2 sided, and P<0.05 was considered statistically significant.

Clinical and biochemical characteristics of the study participants 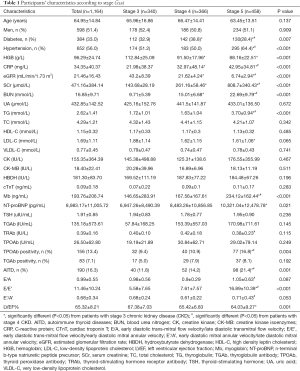 As shown in Table 3, we used multiple linear regression to analyze the correlation between CVD risk factors and thyroid autoantibodies. After adjusting for age and sex, TPOAb and TGAb were found to be not significantly related to HGB, CRP, TG, TC, HDL-C, and LDL-C. A significant positive correlation was observed between TRAb and CRP (r=0.206, P<0.001).

Correlation of thyroid autoantibodies with markers of cardiac function

The prevalence and mortality of CKD is increasing worldwide. Despite rising medical standards and an increase in the average survival time of patients, CKD will eventually lead to end-stage renal disease (ESRD), which poses a great challenge. There is a close association between the thyroid and kidneys. Thyroid autoantibodies and their antigens may be deposited in the glomeruli and cause kidney damage. In addition, immune abnormalities in AITD patients may lead to secondary renal disease. Compared with the normal population, the prevalence of thyroid dysfunction is higher in patients with CKD. Patients with CKD often have CVD in the early stage, and CVD is the leading cause of death in patients with CKD.

A total of 1,164 patients with stages 3–5 CKD were enrolled in our study (566 women and 598 men). A total of 340 patients had stage 3 CKD, 366 had stage 4 CKD, and 458 had stage 5 CKD. We found that the prevalence of AITD gradually increased with the deterioration of renal function, and NT-proBNP and CRP and TPOAb and TGAb titers gradually increased. The positive rate of TPOAb, E/A, E/E’, and E’/A’ were higher in patients with stage 5 CKD. The TG of patients at each stage was high, and the increase of TG in stage 5 CKD was more obvious. Studies have shown that CVD is closely related to changes in body composition, such as decreased muscle tissue and increased fat tissue (9-11). A study in China pointed out that the reduction of skeletal muscle index is independently related to the occurrence of CVD in CKD patient (12). Our study showed that triglyceride of patients at each stage was high, and the increase of TG in stage 5 CKD was more obvious. This means that with the progress of CKD, the disorder of blood lipid metabolism may become more obvious, and the risk of cardiovascular disease will also increase. The prevalence of AITD was statistically different at each stage, and the prevalence was 11.8% for stage 3, 14.2% for stage 4, and 21.4% for stage 5 CKD. In patients with stages 3–5 CKD, TRAb was significantly positively correlated with CRP and negatively correlated with Mb. It was only positively correlated with NT-proBNP in female patients. There were significant differences between TPOAb and TGAb among sexes. Men with diabetes have higher levels of TPOAb and TGAb than their female counterparts. Among female patients, TPOAb and TGAb are significantly negatively correlated with HGB. TPOAb-positive patients had higher E/E’ and LVEF, while patients with higher TRAb titers had lower LVEF.

The lack of this study is that the impact of arrhythmia is ignored due to the lack of ECG data, and the data is not stratified by the primary disease.

Similar immune complex deposits were observed in the thyroid follicular epithelium and glomerular basement membrane in patients with glomerulonephritis associated with Hashimoto’s thyroiditis. The same circulating immune complex can be involved in both diseases (13). Hasnain et al. found there was deposition of TPOAb in the renal tissues of patients with membranous nephropathy complicated with Graves’ disease. And it suggested that TPOAb may contribute to the genesis of membranous nephropathy (14). Therefore, some autoimmune-mediated glomerulonephritis and AITD may have similar pathogeneses.

The findings of our study indicated that the prevalence of AITD gradually increased in patients with stages 3–5 CKD. TPOAb positivity in patients with stage 5 CKD was significantly higher than that in patients with stages 3 and 4 CKD. With the decrease of eGFR, TPOAb and TGAb titers gradually increased, suggesting that there may be some interaction between AITD and CKD. There may be antigenic cross-reactions between AITD and CKD, but these hypotheses require further research to confirm. It has been reported that patients with hyperthyroidism develop membranous nephropathy after treatment with propylthiouracil, and iodine-131 treatment can lead to anti-neutrophil cytoplasmic antibodies (ANCA)-positive crescent nephritis (15,16). The pathogenesis remains to be further investigated.

Echocardiography has the advantages of accurate, objective, reproducible, and safe operation in evaluating cardiac function. It can display patients’ ventricular systolic and diastolic processes, cardiac cavity structure, and blood flow. NT-proBNP may be used to diagnose and evaluate the prognosis of heart failure, but it is not used to distinguish the types of heart failure. Echocardiography cannot only be used to evaluate the cardiac function and prognosis of patients but can also be used to classify the types of heart failure. Studies have shown that the sensitivity and specificity of various echocardiographic parameters in evaluating ejection fraction-retaining heart failure are high, 95% and 100%, respectively (17). Echocardiography plays an important role in ejection fraction-retaining heart failure. Echocardiography can evaluate the left ventricular diastolic function by measuring the E peak, A peak, E/A, E peak deceleration time, A’, and E/E’. Kasner et al. found that E/E’ examined by tissue doppler imaging (TDI) and pulsed wave doppler (PW) can better assess left ventricular diastolic function (18). Similarly, studies have shown that E/E’ is significant in evaluating left ventricular filling pressure and can predict the occurrence of adverse events during ESRD (19,20). De Sutter et al. noted that E’/A’ decreases and E/E’ increases with age (21). These results are consistent with the results of our study. A study showed the decreased diastolic function and cardiac structure damage are common in CKD3 patients (22). Heart damage is more severe in CKD3 patients with Yin-Yang deficiency syndrome than that in spleen-kidney Yang deficiency syndrome and Qi-Yin deficiency syndrome, and the impairment of cardiac function is most severe in Yin-Yang deficiency syndrome. The complication of pathogen-excess can aggravate heart damage. Patients complicated with blood-stasis syndrome have more severe myocardial hypertrophy and ventricular and atrial enlargement degree.

The findings of the present study indicated that the mean E/E’ in patients with stage 5 CKD was 16.89, which was higher than that in stages 3 and 4. Patients with stage 5 CKD have already developed ejection fraction-preserving heart failure. The E/E’ of patients who are TPOAb positive is higher, suggesting that patients who are TPOAb positive may be more prone to diastolic dysfunction, and early intervention should be provided. Only patients with stage 5 CKD were found to have higher E’/A’, but there was no statistically significant difference in the analysis of E’/A’ in patients with stages 3–5 CKD. E’/A’ was also not found to be significantly related to thyroid autoantibodies, which is consistent with guidelines that do not recommend the use of E’/A’ to assess cardiac function (23). Patients who were TPOAb positive had higher LVEF, while TPOAb had a negative correlation with HGB in female patients, and anemia may increase LVEF. The specific mechanism needs further study. Patients with higher TRAb had lower LVEF, and TRAb was significantly positively correlated with CRP. CRP can promote the formation of atherosclerosis can also cause coronary spasm, trigger myocardial ischemia, and reduce LVEF. For E/A, E/E’, E’/A’, and LVEF, no significant difference was found between stages 3 and 4 CKD. Cardiac dysfunction that can be detected by echocardiography may not appear until CKD progresses to stage 5. Once CKD progresses to stage 5, heart dysfunction may develop.

The prevalence of AITD in patients with stages 3–5 CKD was 11.8%, 14.2%, and 21.4%, respectively. With the decline of renal function, the prevalence of AITD increased gradually, and TPOAb and TGAb titers gradually increased. The average E/E’ of patients with stage 5 CKD was 16. Women who are TPOAb positive may be more prone to diastolic heart failure. TRAb may reduce LVEF by promoting inflammation or triggering coronary spasm. Thyroid immune disorder in patients with CKD need more attention, and thyroid autoantibodies should be checked as a basic item.

Reporting Checklist: The authors have completed the STROBE reporting checklist. Available at https://dx.doi.org/10.21037/atm-21-3280

Ethical Statement: The authors are accountable for all aspects of the work in ensuring that questions related to the accuracy or integrity of any part of the work are appropriately investigated and resolved. The study was approved by the Ethics Committee of the Third Affiliated Hospital of Southern Medical University and was conducted according to the Declaration of Helsinki (as revised in 2013). All participants provided written informed consent.