Migraine is a severely disabling neurological disorder with profound effects on productivity and health-related quality of life, which causes significant personal and societal burdens (1-3). The pathophysiology of migraine is not completely understood and there has been relatively little basic research conducted on migraine, so the understanding of and available treatment options for this condition are limited. While current preventive therapies are effective to some degree, novel and safer treatments have a positive and meaningful impact on the life of migraine patients.

Ligustrazine is the main components of Ligusticum wallichii, which has been used in the treatment of headache caused by various factors for hundreds of years in traditional Chinese medicine (TCM) (4). Although some studies have been conducted to determine the underlying mechanism of ligustrazine in treating lumbar intervertebral disc degeneration, atherosclerosis, and asthma, no study has been designed particularly regarding its mechanism in the treatment of migraine. Furthermore, little information is available on the functions of ERK, a uremic toxin aggravated the renal oxidative damage promoter, and c-fos (5), a novel urinary kidney biomarker, in migraine. In recent years, P2X3 receptors (6,7) and TRPV1 receptors (8,9) have attracted more attention in the pathogenesis of migraine attacks. Thus, in order to evaluate the protective action of ligustrazine, and the expression of P2X3 and TRPV1 receptors, ERK, and c-fos in the trigeminal nerve of a rat migraine model, we detected migraine rat trigeminal sensory neurons of P2X3 receptors, TRPV1 receptors, the ERK signaling pathway, and c-fos. We present the following article in accordance with the ARRIVE reporting checklist (available at https://dx.doi.org/10.21037/atm-21-3423).

Adult Wistar rats (15 males and 15 females, body weight of 200–250 g) were purchased from the Laboratory Animal Center at the Southern Medical University (Guangzhou, China). The rats were housed in a 12-h light-dark cycle and given water and food ad libitum. All experiments were conducted under the guidance of the care and use of laboratory animals issued by the Ministry of Science and Technology of the China (10). A modified version of the NTG model described by Lai (11) was used. The rats were randomly divided into three groups (n=10/group): control, migraine (model), and migraine + ligustrazine (TMP). The rats were treated for 7 consecutive days with the daily doses of ligustrazine hydrochloride injections (group TMP, 16 mL/kg/d, 10 mL sterile saline, 40 mg ligustrazine hydrochloride) or normal saline (control and model groups). At 10 min after administration of the last injection, 15 mg/kg body weight of NTG was subcutaneously administered into rat buttocks to establish an experimental migraine model (11) in the model group and TMP group.

All drug solutions were freshly prepared on the day of use. All rats were weighed before behavioral observation throughout the study. No significant differences were found in weight gain between rats treated with ligustrazine. Experiments were performed under a project license (No.: 20170301006) granted by the Laboratory Animal Ethics Committee Jinan University, in compliance with the guidance of the care and use of laboratory animals issued by the Ministry of Science and Technology of the China. A protocol was prepared before the study without registration.

At 3–5 min after the injection, the rats exhibited characteristics of head discomfort such as binaural redness, frequent forelimb scratching of head, increased attempts to climb the cage, tail biting, and reciprocating motion. The animal’s behavior, such as the climbing cage frequency, scratching head frequency, and the duration of ear redness, was continuously recorded by an observer.

After 4 h of modeling in each group rats, 5 rats from each group were anesthetized with 10% chloral hydrate and perfusion-fixed with 4% paraformaldehyde. Their trigeminal ganglions (TGs) were isolated as previously described, and were then paraffin-embedded. Sections were dewaxed and hydrated, subjected to heat antigen retrieval, followed by endogenous peroxidase, and blocked with 5% solution of bovine serum albumin (BSA) for 15 min to block nonspecific antigen. Afterwards, the sections were incubated overnight with rabbit polyclonal anti-fos (1:200, Santa Cruz Biotechnology, Santa Cruz, CA, USA), rabbit polyclonal anti-P2X3 (1:500, Santa Cruz, USA) or rabbit polyclonal anti-TRPV1 (1:500, Santa Cruz, USA). The sections were then incubated for 2 h with mouse anti-rabbit Alexa Fluor 594 as secondary antibodies (1:500, Santa Cruz, USA). Between each of the links, the sections were rinsed with phosphate-buffered saline (PBS) 5 min ×3 times, plus anti-quencher, cemented with neutral gum, and observed under an inverted fluorescence microscope, the presence red fluorescent protein particles was recorded, and the control group with PBS was used as a labeled antibody.

Total RNA was extracted from cells using an RNA extraction kit (DongSheng Biotech, Guangzhou, Guangdong, China), according to the manufacturer’s instructions. Total RNA (1 µg) was then used for reverse transcription (RT) with a commercially available kit (RevertAid First Strand cDNA Synthesis Kit, Fermentas (Thermo Fisher Scientific), Waltham, MA, USA). Real-time polymerase chain reaction (qRT-PCR) was performed in triplicate with an ABI Step One Plus system (Applied Biosystems, Waltham, MA, USA) and a fluorescence-labeled SYBR Green/ROX qPCR Master Mix kit (Fermentas) using specific primers. The, P2X3 and TRPV1 were detected with glyceraldehyde-3-phosphate dehydrogenase (GAPDH) taken as an endogenous control (primer sequences are listed in Table 1). The results were analyzed with SOS2.1 software (Applied Biosystems).Gene expression was calculated from the accurate threshold cycle (Ct), which is the PCR cycle at which an increase in fluorescence from SYBR Green probes above the baseline signal can first be detected. The Ct values for GAPDH were compared with those from P2X3 and TRPV1 in each well to calculate ΔCt. Data of the treated conditions were expressed relative to the signal obtained for the average of the untreated controls by the ΔΔCt calculation. The triplicate ΔΔCt values for each sample were averaged.

After the control group had been injected with normal saline, within 30 min scratching and climbing of the cage became a slightly conspicuous phenomenon, the rest period showed no abnormal activity, and no binaural redness was observed. At 4 min after the subcutaneous injection of NTG, both the model group and TMP group exhibited redness of the ears, frequent head scratching, cage climbing, and other phenomena, this behavior peaked at 30–90 min after modelling, and was sustained for about 2–3 hours. The duration of scratching and binaural redness of the model group were longer than those of the TMP group (P<0.001) (Table 2, Figure 2).

Compared with the control group, at 30 min after modelling, there were no differences in the amount of scratching between the model group and TMP group, but from 30 min onwards, the amount of cage climbing and head scratching in the TMP group were all higher than the model group over time (P<0.001), which indicated that preventive administration can significantly improve the behavioral manifestations of migraine rats (Tables 3,4, Figure 1). 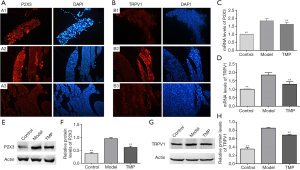 Figure 5 Effects of TMP on the expression of ERK protein in TG of each group. (A) Bands of proteins of p-ERK, ERK were detected by WB; (B) the analysis results of proteins expression of p-ERK/ERK. Compared with model group: **P<0.01. TG, trigeminal ganglion; TMP, tetramethylpyrazine; WB, western blot.

The neurogenic inflammation, the cortical spreading depression (CSD) and the trigeminovascular system are the three basic mechanisms that are thought to be involved in the pathogenesis of the migraine headache. In addition, some genes are also thought to contribute to the onset of migraine, which is characterized by nausea, vomiting, sensitivity to light and sound, unilateral head pain, and attacks that are of moderate to severe pain (12). Even though pathophysiology of migraine is not fully understood, meningeal neurogenic inflammation has been largely held responsible for this state. This neuroinflammation in the meninges is referred to as sterile dural neurogenic inflammation and can be initiated by endogenous events like cortical spreading depression (13). More and more evidences show that intracellular regulatory mechanisms and intercellular signaling plays an important role in the occurrence of headache (14). The current available information indicates an intracranial network activation that culminates in the sensitization of the trigeminovascular system, release of inflammatory markers, and initiation of meningeal-like inflammatory reaction that is sensed as headache. Genetic factors might play a significant role in deciding an individual’s susceptibility to migraine (12). Accumulating studies have demonstrated that activation and sensitization of the trigeminovascular system is the key to a migraine headache (15). Some studies have shown that the binding sites of CGRP receptor antagonists and the expression of CGRP and its receptors in the trigeminal ganglion of rhesus monkeys in primates, which also indicates that there is co localization between PACAP and CGRP. Meanwhile, PACAP and CGRP showed significant changes in chronic migraine (16,17). Recently, Chinese medicine extracts have shown increasing potential as treatments for migraine due to their analgesic effect and fewer side effects (18). Ligustrazine (tetramethylpyrazine, TMP) is the main alkaloid monomer extracted from Ligusticum wallichii, which is effective in treating migraine (19). However, the mechanisms by which Ligustrazine reduce the pain in trigeminovascular system remain little understood. This current investigation explored the effects of ligustrazine on the expression of neurotransmitters in the trigeminal ganglion of a rat migraine model.

The gene c-fos plays an extremely important role in the course of migraine (20). Expression of immediate early gene c-fos positivity is the neuronal activation marker, which is rich in expression in the spinal trigeminal nucleus caudal portion. When the cells are stimulated, c-fos nucleus is transferred to the cytoplasm and translated into fos protein. Testing the fos protein can elucidate the indirect response of the distribution of the function-related cells in the brain (21).

Recent studies have found that extracellular signal-regulated kinase (ERK) regulates the transmission of neuropathic pain a new target, and migraine is a chronic neuropathic pain condition (22,23). The ERK/MAPK participate in a variety of neural plasticity activities, such as the generation and maintenance of pain; ERK/MAPK activation is necessary for the development and maintenance of neuropathic pain. Transient receptor potential vanilloid subtype 1 (TRPV1) receptors and purinergic (P2X3) receptors, are non-selective cation channels (9,24), and they high expression of both in the small diameter sensory neurons of trigeminal sensory neurons is associated with pain. In recent years, P2X3 receptors and TRPV1 receptors have attracted increasing attention in relation to the pathogenesis of migraine. When migraine happens, the expression of trigeminal sensory neurons of P2X3 receptors and TRPV1 receptors has been shown to be significantly increased (25,26).

The results showed that ligustrazine plays a role in the treatment of migraine by inhibiting the expression of pain-related neurotransmitters in the trigeminal nervous system. The mechanism may be multi-targeted, or may inhibit the expression of upstream receptors in the whole pain transmission system. For example, NLRP3 inflammasome, L-1β and substance P content may also be potential targets. The dosage of ligustrazine was counted according to the single-dose injection used clinically in adults. We did not design different groups based on alternate doses to determine the optimal dose of ligustrazine for establishing NTG models in rats, and the toxic effect of ligustrazine treatment in NTG-induced migraine rats was not observed. Therefore, further studies are warranted.

Funding: This study was supported by the National Natural Science Foundation of China (81774239).

Reporting Checklist: The authors have completed the ARRIVE reporting checklist. Available at https://dx.doi.org/10.21037/atm-21-3423

Conflicts of Interest: All authors have completed the ICMJE uniform disclosure form (available at https://dx.doi.org/10.21037/atm-21-3423). The authors report funding support from the National Natural Science Foundation of China (81774239). The authors have no other conflicts of interest to declare.

Ethical Statement: The authors are accountable for all aspects of the work in ensuring that questions related to the accuracy or integrity of any part of the work are appropriately investigated and resolved. Experiments were performed under a project license (No.: 20170301006) granted by the Laboratory Animal Ethics Committee Jinan University, in compliance with the guidance of the care and use of laboratory animals issued by the Ministry of Science and Technology of the China.