Complex radial polydactyly in a Chinese family: inclusion of triphalangism, triplication, and syndactyly

Polydactyly is characterized by duplication of digits (>5 digits per limb) (1). Polydactyly results from disturbances in the normal programme of the anterior–posterior axis of the developing lim. It is usually a heterogeneous inherited limb disorder, which is associated with a wide variety of phenotypes ranging from simple bifid duplication to complex duplications. Variations in phenotype include different sites (hand or foot), different location of the extra digits (radial side, ulnar side, or central), and severity (partial or complete duplication of the digits) (2).

Radial polydactyly, also called preaxial polydactyly, that is accompanied by duplication of the thumb, is one of the most commonly reported forms of polydactyly with an incidence of approximately 1 in 3,000 births (3). In Zhou et al.’s study, they investigated the epidemiological characteristics of Chinese polydactyly and identified 2,097 cases presented with polydactyly in 2,218,616 perinates, which the prevalence was 9.45 per 10,000 (4). The main treatment for radial polydactyly is surgical removal of the extra digits to preserve thumb function (5). A limited number of studies have investigated families in which multiple individuals in the same family across three generations or more are affected by radial polydactyly and syndactyly.

Previous study reported 9 patients from 9 families, and found there was an association between radial polydactyly and radial longitudinal deficiency (RLD) in these patients. Similar phenotype was also identified in the family of our study (6).

The present study report examined an extremely rare family in which nine individuals across six generations were affected by complex radial polydactyly. The various mixed phenotypes profiled in this family may represent a rare type of polydactyly, which should be caused by the same genetic background.

All procedures performed in this study involving human participants were in accordance with the Declaration of Helsinki (as revised in 2013). The study was approved by the Ethical Review Committee of the Ningbo No. 6 Hospital (SX201950) and informed consent was taken from all the patients.

A pedigree of a six-generation Chinese family was involved (Figure 1). There was a total of 34 individuals (including their spouses) in the family and 11 individuals had polydactyly. The average age of the patients ranged from 7 months to 96 years. Among the 11 patients with polydactyly, 6 were male and 5 were female, and the male to female ratio was approximately 1:1. The affected individuals spanned 5 generations, and there was no skipped generation. All affected patients had one affected parent, which suggested that the condition had an autosomal dominant pattern of inheritance. Except for 2 patients (II3 and III2) who were deceased at the time of this study, all patients underwent complete physical examination, and clinical information including photographs and X-ray films were collated.

Figure 1 The pedigree of the 6-generation Chinese family. There were 11 affected family members (6 men and 5 women) and 23 unaffected individuals. 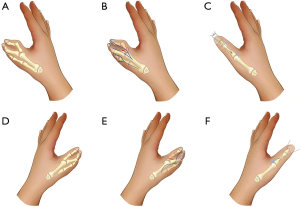 Descriptive statistics, summarizing data in an organized manner, were used and reported numerically in the text and/or in the figures and tables.

Characteristics of the pedigree

Table 1 Summary of the phenotypes of the affected individuals in the family, including thumb duplication, syndactyly, triphalangism, and ulnar polydactyly
Full table

Description of the phenotype

The patients with complex thumb duplication had a variety of deformities, including triplication, triphalangism, hypoplasia, and symphalangism (Figure 4). Members of this family commonly had a combination of these deformities. In addition, syndactyly manifested as complex and simple incomplete types (Figure 5). In complex syndactyly, the lesions involved fusion of both bony and soft tissue and commonly affected the third to the fifth digits. In simple incomplete syndactyly, the malformation involved incomplete fusion of the body or soft tissue between the third and fourth digits. 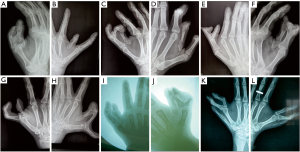 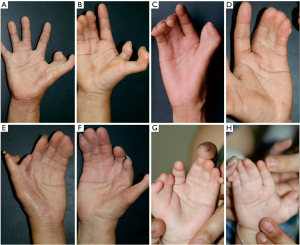 The 2 patients who were surgically treated were followed up for 8 and 2 years, respectively. One of the patients (patient V2) showed normal hand and thumb function at the follow-up at 8 years after the surgery, and the X-ray showed normal anatomical configuration in both hands (Figure 6). Similarly, the other patient (VI) showed satisfactory recovery of hand function at the 2-year follow-up post-surgery (Figure 7). 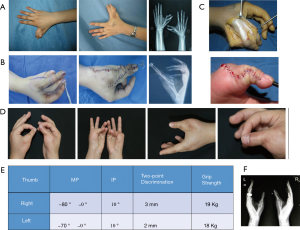 Figure 6 A 25-year-old woman with complex thumb duplication. (A) Preoperative optical photographs and X-ray radiographs showing radial polydactyly with triphalangism and triplication. (B) Images of hands with marks for the incision before the first surgical treatment to resect the radial supernumerary thumb (right), after surgery (middle), and postoperative X-ray radiographs (left). (C) Images of hands during the second surgical treatment to resect the radial supernumerary thumb showing the exposure of the thumb (above) and the postoperative image (below). (D) Images showing the functional recovery of the thumb at 8 years post-surgery. (E) Functional evaluation of the hands. (F) Follow-up X-ray radiograph at 8 years after surgery. 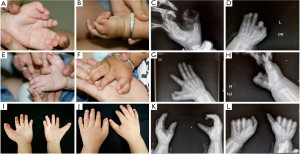 In addition to the complex manifestations of thumb duplication, most of the affected persons had syndactyly, which was classified, according to the Temtamy-McKusick classification (12), as complex syndactyly involving fusion of both bony and soft tissues of the third to the fifth digits and simple incomplete syndactyly involving fusion of the body or soft tissues between the third and fourth digits. Mixed complete and incomplete syndactyly was also observed in two patients. Therefore, these patients were better categorized as complex radial polydactyly with components of triphalangism, triplication, and syndactyly. These types of cases have been rarely reported in the literature and may represent a rare type of polydactyly.

Most of the polydactylies are due to the disruption of the anterior-posterior (AP) polarization of the limb bud. The disease could be part manifestation of a syndrome or an isolated form. Genetic factors account for the main cause of polydactyly, and environmental factors are less likely involved. Most non-syndromic polydactyly show an autosomal dominant inheritability. Hence, single gene mutation is enough to induce the disease. To date, there are at least 25 genes and loci associated with polydactyly in databases (HGMD, OMIM, and PubMed).

Mutation and duplication of the zone of polarizing activity regulatory sequence (ZRS), an enhancer of sonic hedgehog (SHH), are known to contribute to the pathogenesis of radial polydactyly (13). The ZRS is located within intron 5 of the LMBR1 gene on chromosome 7q36.3 (14), and plays an important role in the regulation of its target gene SHH that determines the number of digits during early limb development (15). Mutations in ZRS can increase Shh gene expression, thus resulting in polydactyly in many species, including mice, dogs, cats, chickens, and humans (16,17). Studies have shown that mutations and duplication of the ZRS may result in various phenotypes including triphalangism and syndactyly (18-20). Recent reports have described an association of mutations in the pre-ZRS region with polydactyly (21,22). In addition, ZRS can cause human syndactyly and triphalangeal thumb-polysyndactyly syndrome (TPTPS) in Chinese families (18,19,23). The syndrome has an autosomal-dominant mode of inheritance and is characterized by anomalies of the upper extremity, mainly manifesting as one or more similar structures with three fingers in the thumb position, co-existing between the third and fifth fingers, and less involvement of the second finger. Therefore, further studies should be performed to detect potential mutations and/or duplications in the ZRS region in this Chinese family.

Surgical resection of extra digits to achieve mobility of the thumb is the main treatment option for radial polydactyly (24). Since the ulnar thumb is better developed, the radial thumb is typically resected in patients with radial polydactyly. For patients V2 and VI, the radial supernumerary thumbs were resected via two osteotomies. In addition, the ulnar thumb was preserved owing to the benefit of preservation of the ulnar collateral ligament, which is important for grip and pinch. For these patients, the thumb function, such as two-point discrimination and grip, were well recovered, even at 8 years post-surgery for patient V2.

In summary, this study described a Chinese family with nine individuals across six generations affected by complex radial polydactyly. This case series exhibited various mixed phenotypes, including thumb duplication, syndactyly, triphalangism, and ulnar polydactyly. Importantly, variable phenotypes are expected in diseases with an autosomal dominant mode of inheritance, and this could be attributed to gene modifiers, epigenetic influences, or environmental factors. Further studies should be performed to detect the potential genetic causes that led to the complex phenotypes of polydactyly in this large Chinese family.

Funding: This research was supported by research a grant from Zhejiang Province Health project (2021KY1061).

Reporting Checklist: The authors have completed the MDAR reporting checklist. Available at https://dx.doi.org/10.21037/atm-21-2773

Conflicts of Interest: All authors have completed the ICMJE uniform disclosure form (available at https://dx.doi.org/10.21037/atm-21-2773). The authors have no conflicts of interest to declare.

Ethical Statement: The authors are accountable for all aspects of the work in ensuring that questions related to the accuracy or integrity of any part of the work are appropriately investigated and resolved. All procedures performed in this study involving human participants were in accordance with the Declaration of Helsinki (as revised in 2013). The study was approved by the Ethical Review Committee of the Ningbo No. 6 Hospital (SX201950) and informed consent was taken from all the patients.