Systemic light-chain (AL) amyloidosis is triggered by underlying clonal plasma cell dyscrasia that produces amyloidogenic immunoglobulin light chains, resulting in the deposition of diffuse misfolded protein fibrils, which can lead to fatal functional damage to multiple vital organs (1). AL amyloidosis is a rare disease with a 3-year overall survival (OS) rate of only 41% if left untreated (2). Disease prognosis is strongly associated with the severity of organ involvement, especially cardiac, renal, and hepatic involvement (3,4), which is usually a cause of substantial morbidity and often results in rapidly progressive organ failure and death.

The current staging systems use markers of myocardial cell injury and heart failure, as these are highly sensitive to cardiac involvement in amyloidosis (5). The Mayo Clinic 2004 staging system (Mayo 2004) uses cardiac troponin T (cTnT) and N-terminal pro-brain natriuretic peptide (NT-proBNP) to classify patients into three stages (6). The Mayo 2012 system groups patients according to cTnT or high-sensitivity troponin T, NT-proBNP, and the value of the difference between the involved and uninvolved free light chain (dFLC) (7). Cardiac involvement greatly affects the disease outcome; therefore, markers of cardiac injury and dysfunction are powerful prognostic factors in AL amyloidosis (8). However, AL amyloidosis is a systemic disease characterized by the deposition of unique fibrils in different vital organs (9). Thus, in addition to cardiac involvement, hepatic and renal involvement can also affect long-term survival or lead to early death. Palladini et al. designed a staging system that uses proteinuria and the glomerular filtration rate to discriminate patients at risk of progression to dialysis (10). Proteinuria >5 g/24 h and an estimated glomerular filtration rate (eGFR) <50 mL/min were adopted for predicting the progression to dialysis (10). According to a retrospective analysis of the clinical features and natural history data of 102 patients diagnosed with systemic AL amyloidosis with hepatic involvement, increased total bilirubin (Tbil) indicates reduced progression-free survival and OS (4). The majority of patients have a significant impairment of vital organs, the existing staging systems do not consider the simultaneous inclusion of multiple organ function indicators. Therefore, factors that can better reflect the effects of multiple organ involvement (including renal and hepatic involvement) on the survival of patients with AL amyloidosis should be explored for potential inclusion in a prognostic disease staging system.

Here, we demonstrate a novel staging system based on a nationwide survey of 1,064 patients in China. This novel staging system incorporates serum indicators reflecting organ function as well as the level of amyloidogenic light-chain synthesis. Therefore, it could be used to explain the heterogeneity in the outcomes of patients with AL amyloidosis with multiple organ involvement. We present the following article in accordance with the TRIPOD reporting checklist (available at https://dx.doi.org/10.21037/atm-21-4033).

With the cooperation of 18 hospitals in the Chinese Registration Network for Light-chain Amyloidosis, a nationwide survey was conducted from 2009 to 2020, and 1,064 patients with systemic AL amyloidosis were registered and followed. The diagnosis of systemic AL amyloidosis was confirmed when Congo red-positive fibril deposition was observed, and the deposits were characteristic of the AL type according to immunohistochemistry, immunofluorescence, or laser microdissection with mass spectrometry-based proteomic analysis. To construct the staging system, a retrospective analysis was performed with the clinical and laboratory data of 813 patients who were also classifiable according to the current Mayo 2012 staging system. A validation cohort of 251 patients was used for further evaluation of the new prognostic staging system. Treatment options included autologous stem cell transplantation (ASCT), bortezomib-based therapy, a Thalidomide-based regimen, a melphalan-based regimen, and others. The study was performed according to the principles of the Declaration of Helsinki (as revised in 2013) and approved by the Medical Ethics Committee of the Shengjing Hospital of China Medical University (2020PS055J). All participants provided written informed consent.

We followed up all patients at the clinics or via telephone before recording the follow-up data. The final follow-up date was October 31, 2020. OS was defined as the time from diagnosis to death or the last follow-up. Patients who were alive at the last follow-up were censored at that date. Progression-free survival was defined as the period from treatment initiation to disease progression, relapse, or death from any cause.

A receiver operating characteristic curve analysis, with calculation of the Youden Index, was performed to determine the cut-off values. The prognostic factors for OS were identified based on a Cox proportional hazards analysis. Survival curves were constructed using the Kaplan-Meier method and compared using a log-rank test. Differences in nominal variables between groups were tested using Fisher’s exact test, and differences in continuous variables between groups were determined using the Wilcoxon signed-rank test. Missing data were handled with multiple imputations. RealMedSci software (Shenyang, China) was used for the statistical analyses. 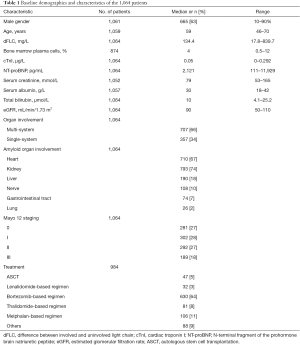 Table 1 Baseline demographics and characteristics of the 1,064 patients
Full table

Organ function-related characteristics were considered, including proteinuria, albumin, eGFR, Tbil, cardiac troponin I (cTnI), and NT-proBNP. Of these, cTnI, NT-proBNP, and eGFR have been identified previously as being prognostically valuable in AL amyloidosis. Additionally, dFLC was included as a plasma cell clone-related characteristic. The hazard ratios related to these variables in the univariate and multivariate analyses are shown in Table 2. All variables, except for proteinuria, were significant predictors of OS in the univariate analysis. In the multivariate analysis model, eGFR, Tbil, cTnI, NT-proBNP, and dFLC were independent prognostic factors. The influence weights of all parameters on prognosis were similar, with NT-proBNP having the largest and cTnI the smallest.

Development of the prognostic model

Figure 1 Kaplan-Meier curves for OS among the test cohort (n=813) patients based on the new staging system. OS, overall survival.

Comparison with the Mayo 2012 staging system

Application of the new staging system to subgroups of patients with cardiac, hepatic, and renal involvement 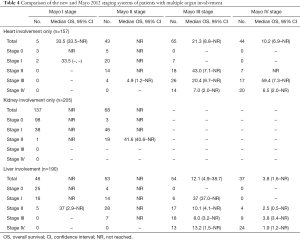 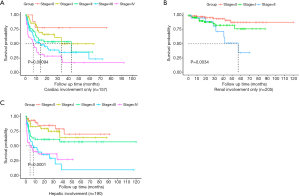 Validation of the prognostic model

The current study developed and validated a new staging system for AL amyloidosis based on data from the largest cohort to date. Of note, unlike prior staging systems, the new system incorporates plasma cell-related characteristics in addition to prognostic laboratory markers related to cardiac, renal, and hepatic function.

AL amyloidosis is a plasma cell dyscrasia (11) in which pathogenic plasma cells secrete an excess amount of amyloidogenic light chains that are conformationally changed and subsequently cause amyloid fibrils (12,13). Organ architecture disruption, together with the direct cytotoxic effect of light chains, results in organ dysfunction (14). Kumar et al. evaluated plasma cell clone-related characteristics, namely dFLC, maximum bone marrow plasma cell percentage, β2-microglobulin, plasma cell labeling index, and the presence or absence of circulating plasma cells, and revealed that of these, serum FLC is prognostically valuable in AL amyloidosis (15). A high dFLC is related to more severe organ dysfunction and an unfavorable prognosis (16,17). A threshold dFLC of ≥180 mg/L is well-validated and used as part of the Mayo 2012 AL amyloidosis staging system. In our new staging system, based on the data from 1,064 patients with AL amyloidosis, dFLC was also a prognostic factor at a cut-off value of ≥100 mg/L.

As a multisystemic disorder, AL amyloidosis can affect the heart, kidneys, liver, nerves, lungs, and bowel. Common management approaches include anti-plasma cell systemic chemotherapy and high-dose chemotherapy followed by ASCT; however, only 20–25% of patients with AL amyloidosis are considered eligible for stem cell transplantation based on age, renal function, and severity of heart failure (18-20). Effective therapy exists, although it is ineffective if the end-organ damage is severe. In almost 40% of patients, advanced organ involvement is observed in the first year of diagnosis, and 25% of patients die within 6 months of diagnosis (21). Commonly, the early outcome is closely related to the range and severity of organ involvement (22). Therefore, it is vital for clinicians to accurately estimate the prognosis of AL amyloidosis based on organ involvement.

The morbidity and mortality of patients with AL amyloidosis are closely related to the severity of cardiac involvement. The Mayo 2004 system classifies patients into three stages according to the following threshold values: cTnT ≥0.035 g/L, cTnI ≥0.1 g/L, and NT-proBNP ≥332 ng/L. Moreover, the Mayo 2012 model classifies patients based on cTnT ≥0.025 ng/mL and NT-proBNP ≥1,800 pg/mL. Cardiac troponins provide an indication of myocardial damage. In patients with normal renal function, cTnT levels will increase in the first 3 to 5 hours following myocardial infarction and remain high for up to 21 days, whereas their cTnI levels will increase in the first 3 hours and remain high for up to 7 days. According to recent studies, serum cardiac troponin levels are elevated in at least 50% of patients with renal disease (23). Therefore, for patients with amyloidosis who only have renal involvement, it remains unclear whether troponin reflects the degree of renal involvement and the prognosis. Thus, we included the eGFR as a factor reflecting renal function in our staging system to supplement the assessment of amyloidosis in patients with multiple organ involvement.

The kidney is the second most frequently involved organ in patients with AL amyloidosis (24). Previously, a staging system based on the combination of proteinuria and eGFR was proposed to estimate the risk of end-stage renal disease; the prognostic value of eGFR (<50 mL/min/1.73 m2) and proteinuria (>5 g/d) at diagnosis for predicting dialysis was confirmed (25), and these results might be used as guidelines in clinical treatment. In our new staging system, we included eGFR <60 mL/min/1.73 m2 to improve the evaluation of patients with AL amyloidosis with only renal involvement. Of course, eGFR is also affected by cardiac function; hence, sometimes eGFR alone cannot be used to evaluate patients’ renal function. That said, our staging system also includes indicators of cardiac function, and the combination of the two can better stratify patient risk.

In conclusion, a new staging system has been developed that incorporates plasma cell-related characteristics in addition to laboratory markers of prognosis based on cardiac, renal, and hepatic function. This staging system for AL amyloidosis will allow clinicians to better classify patients with multiple organ involvement.

Reporting Checklist: The authors have completed the TRIPOD reporting checklist. Available at https://dx.doi.org/10.21037/atm-21-4033

Conflicts of Interest: All authors have completed the ICMJE uniform disclosure form (available at https://dx.doi.org/10.21037/atm-21-4033). The author report that this work was supported by the Neusoft Research of Intelligent Healthcare Technology, Co., Ltd. The authors are grateful for their support in terms of data extraction, analysis, and evaluation by leveraging RealOne ISCI and RealMedSci and for allowing us to use their clinic research platform and automatic medical analysis platform. This work was also supported by the Chinese Registration Network for Light-chain Amyloidosis. The authors have no other conflicts of interest to declare.

Ethical Statement: The authors are accountable for all aspects of the work in ensuring that questions related to the accuracy or integrity of any part of the work are appropriately investigated and resolved. The study was performed according to the principles of the Declaration of Helsinki (as revised in 2013) and approved by the Medical Ethics Committee of the Shengjing Hospital of China Medical University (2020PS055J). All participants provided written informed consent.